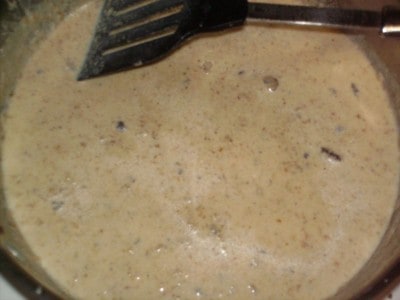 My friend, Michael, called me this week and threatened to put a hit out on me if I keep proliferating our once guarded recipes. He said “It ain’t right you giving all of these things out!”. I mentioned Paula Deen and he quickly let me know that he wasn’t too happy with her for her betrayal of our food heritage either. Michael was being good natured about it, heck I was thrilled that he had actually read my site, but it still doesn’t hurt to know that his Mama has been reading my site as well so I have a built in bodyguard in Miss Nita.
I also have some canned apple butter that he is hoping to get his hands on…

Today, we’re going to make a real staple. This recipe is going to separate the men from the mice, as they say. In our case, it would be one of those things which literally draws the line in the sand. Suppose a person of the northern persuasion (my new politically correct way of saying “yankee”) were to inflitrate our lines and pose as a native. Suppose, just suppose, that discovering who this person was would affect our like…..national security or something. Lets say they wanted to deface our big statue of the boll weevil or some other horrific crime. Well, this gravy alone could detect who the imposter was. Keep reading, I’ll show you why.

Note: No yankees were harmed in the making of this tutorial. They were fed obscene amounts of gravy and southern cooking and will be staying a spell so we can have time to pump them full of dumplings, apple butter, grits, sweet tea, and any other good stuff we can come up with. Don’t you just love simple recipes? That is one of the best things about southern cooking, its just plain simple and just plain good. Always unnerves me when I see a recipe for sausage gravy with an ingredient list that reads like a scientific classification. I think southerners are just trying to show off to folks of the northern persuasion when they do that. Theres no need.
Milk, Flour, Sausage = Sausage gravy.

See that sausage in the pic? You know you’re from my neck of the woods if you took one look at that sausage package and immediately started humming this song. Just for kicks, I like to sing the first part out loud… “For real country sausage, the best you ever tried….” Then wait to hear my kids finish it off… “Take home a package of our Tennessee Pride!”. Thats how I know I raised them right. A person of the northern persuasion would not know this song, of course.
*Conversely, though, you could use this to spot a redneck in your midst. I’m afraid I’d pass (or fail, depending on your point of view) this test with both hands tied behind my back. Slice your sausage in whatever thickness you prefer. I usually go for about half an inch but some people like it thinner. Place sausage in pan over medium heat and cook until well browned. It will look something like this. See that brown stuff in the bottom? Thats gonna be your gravy! Remove sausage once it is done and place on paper towel lined plate to drain. You will have a good bit of grease left in your skillet. You need about two tablespoons, so if you have more drain it off to leave about that much. Sprinkle three to four tablespoons of flour in your skillet. Cook this over medium low heat until the flour is browned. Scrape the bottom of the skillet to stir sausage bits into your gravy. Pepper it to taste. Salt it to taste. Add milk. I added about a cup and a half here. Stir well until smooth and creamy. Take a piece of sausage or two and crumble it up in your gravy. I made a small amount of gravy so I just used one sausage. Most folks will take a biscuit and set it on their plate and spoon gravy onto it. They might cut it in half first and spoon gravy on both halves.
Thats not how we really like it though.
We REALLY like to tear our biscuit up in our bowl…because that’s what our mamas did when we were little. 🙂 Spoon gravy all over it. At this point you can use a fork……or get a spoon and really pretend your mama is there.

If you tear up the biscuits for your guests, you will likely notice them sprouting huge grins at seeing the nostalgic sight.
However, some of them may look at you awful funny – I think you’ve spotted your yankee at this point. Get out your best plates, give them the head of the table, and provide them with the best apple butter and biscuits you have to offer.
We want them leaving with a good impression, by god!
Bring on the sweet tea! We got company!
I bet they won’t wanna mess with our Boll Weevil statue after all…
Need a good biscuit recipe to go with this gravy? Try these Old Fashioned Cat Head Biscuits
Like This?
Share it!