These Peach Cobbler Muffins with their big chunks of peaches and just the right amount of cinnamon are a perfect snack or breakfast treat. 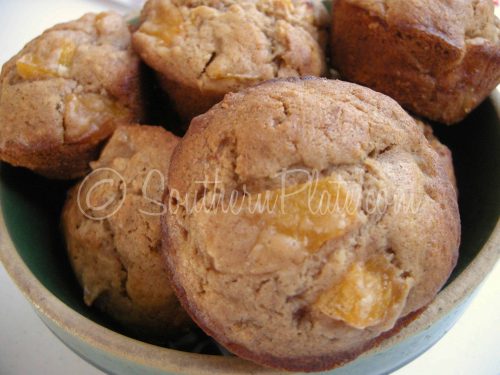 Every now and then I get a hitch in my step to do something and can’t seem to move beyond it til I done did whatever it was I had a hankerin’ to do (that sentence makes a lot more sense if you say it with a Southern accent, honest). Last week I got to thinking about muffins. You see, my mother thinks muffins are the second coming. She’s always looking for a new muffin recipe. Well, I got to thinking that we didn’t really have a be all, end all peach muffin recipe and isn’t that a shame? Of course it is

What would be the perfect peach muffin? Oooh! If it tasted like Mama’s peach cobbler, that would be good. It would have to have big old chunks of peaches and brown sugar, too, with just enough cinnamon to pull it all together.

So next thing you know I went to my personal playground, which is known to some as the kitchen here at Bountiful, and after adding a little of this and a little of that, Peach Cobbler Muffins were born. I called up Daddy, who was in the area working, and had him stop off to take some home to my most honored taste tester: My Mama.

I received the ultimate praise: She asked for the recipe. So I’m sharing it with y’all today, too. Hope you like it as much as we do. 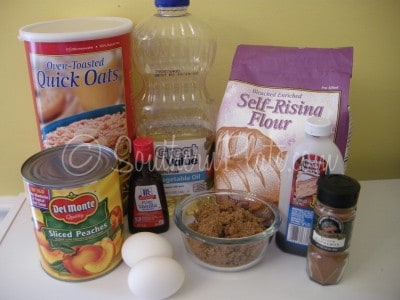 I just noticed that there are two bottles of vanilla in this photograph. ~sighs~ These kinds of things have been happening at my house ever since I was forced to buy a bottle of pure vanilla because the grocery store was out of imitation. There has been a rivalry and I can only assume it led to the pure vanilla jumping into this photograph at the last moment, front and center. Just ignore one of the bottles there, your choice. 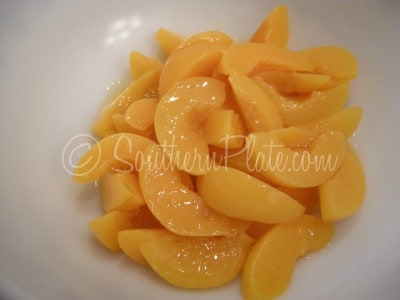 Drain your peaches really well and pour them in a bowl. 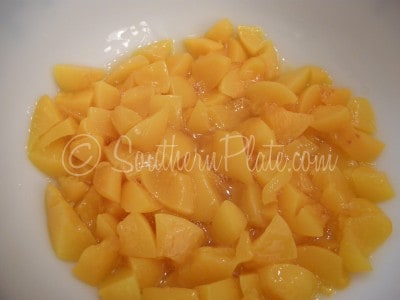 Chop them up coarsely with a knife.

You can used diced peaches if you like but I really like the big ole chunks you make this way! 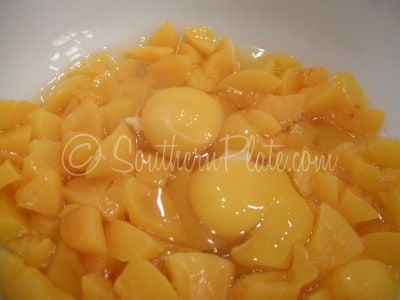 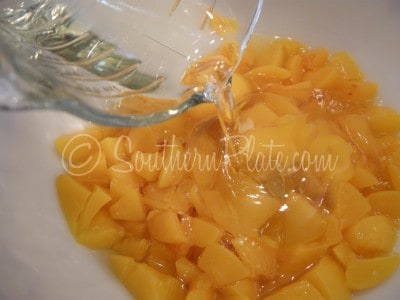 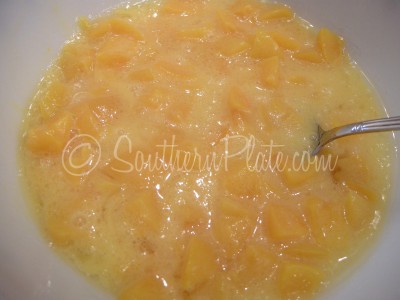 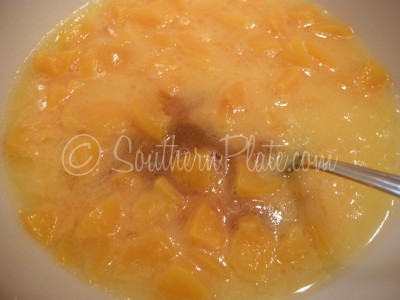 Toss in your vanilla.

I FINALLY finished off that little bottle of pure vanilla.

Sooooooooooooo, Sunday I went to Sam’s Club by myself.

~pauses to marvel at that sentence, having never thought she’d ever say such a thing~

Anyway, I bought the biggest whooptee thing of imitation vanilla I’ve ever seen in my whole entire life. Paid less than four bucks for it, too! No more pure vanilla! I prefer vanilla that just comes right out and says “Hey, I’m not the real thing but I wanna help ya cook anyway and I’ll do my best!”.

I find that pure vanilla tends to put on airs. Pure vanilla wants to be all measured out and used sparingly because it’s “pure”. Imitation just lets you pour it on in there straight from the bottle! We’s jes plain folks here, ain’t got room for snobbiness in my kitchen. 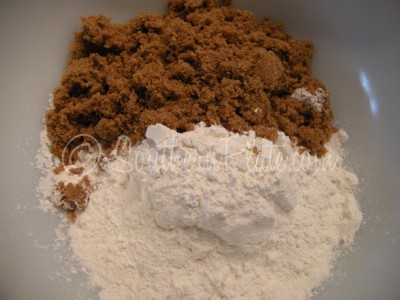 Place brown sugar and flour in a large mixing bowl.

I use light and dark brown sugar interchangeably in my recipes, based on what I have on hand, but I prefer dark sugar. 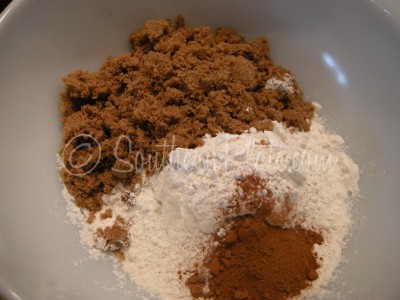 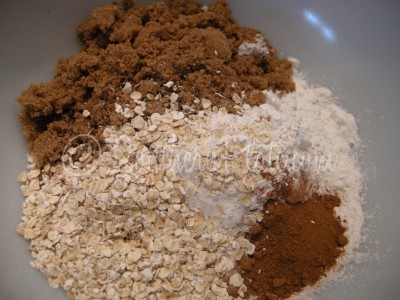 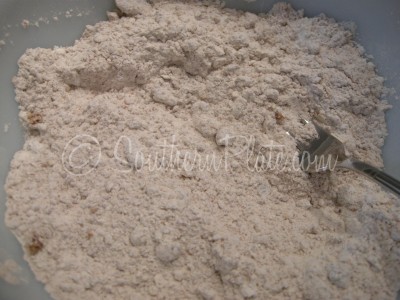 Stir all of that up with a fork. 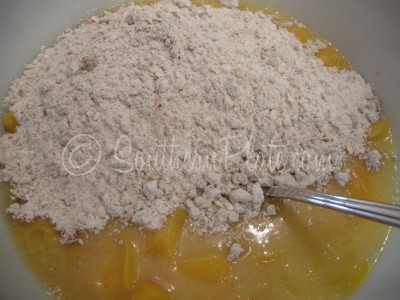 Pour the dry stuff into the wet stuff. 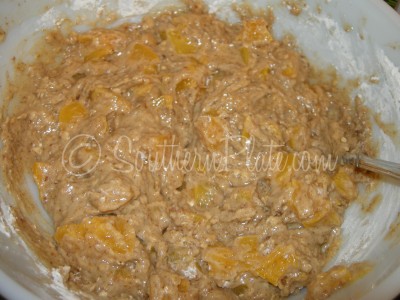 and stir it up.

I’m not gonna encourage you to eat batter that has raw eggs in it or anything like that, coz I know none of us EVER taste the batter, right?

I’m jes gonna say that if you were to pick up that spoon right there and it happened to have a good glob of that brown sugary batter with a big old peach chunk in it, it sure would be good – or so I’m imagining. ~winks~ 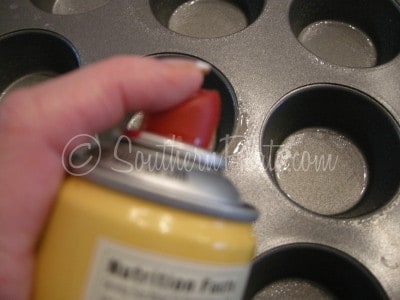 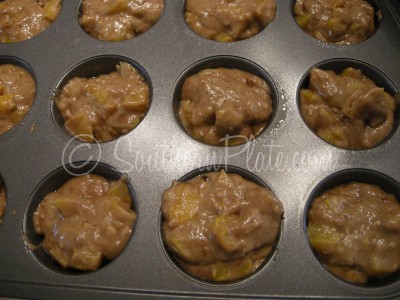 Fill each cup with batter. This batter doesn’t rise much so you can fill them all the way to the top. 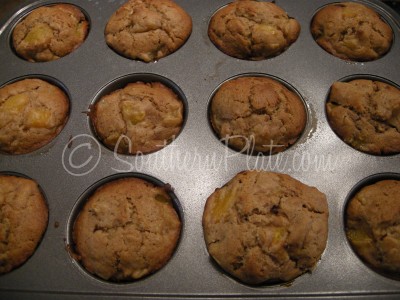 Bake at 400 for about twenty minutes, or until browned lightly on the top. When they come out, let them sit about five minutes and then take a spoon and carefully go around all of the edges before removing them from the pan to cool.

But eat one hot when no one is looking, coz you done worked this hard and you deserve to taste one. Aren’t they perty? 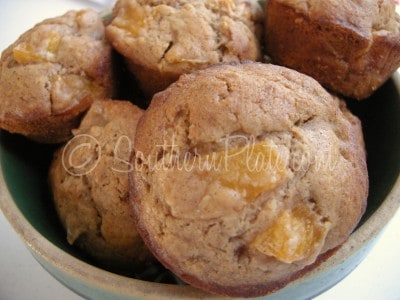 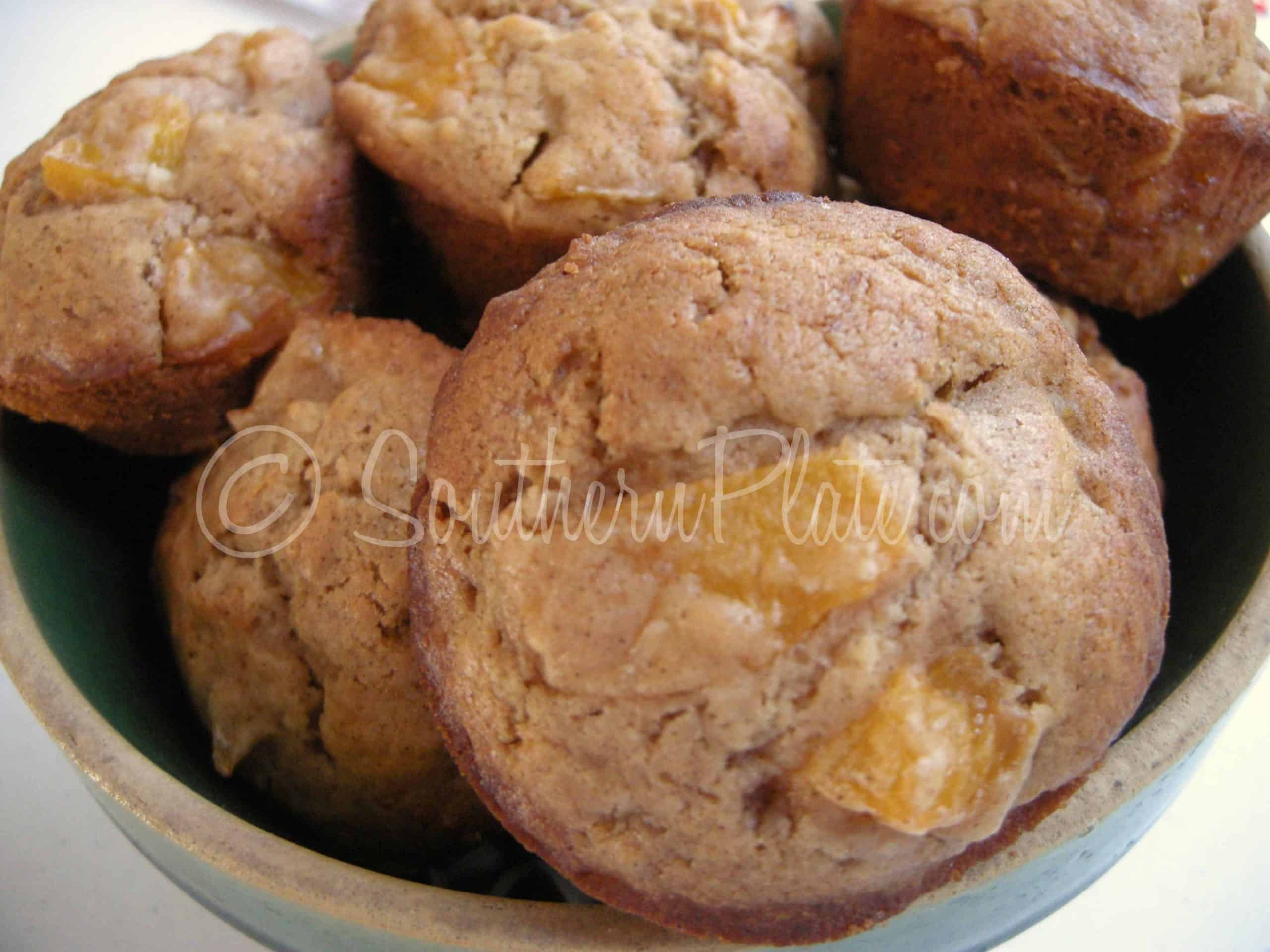 What would be the perfect peach muffin? Oooh! If it tasted like Mama's peach cobbler, that would be good. It would have to have big old chunks of peaches and brown sugar, too, with just enough cinnamon to pull it all together.
Print Recipe Pin Recipe
Prep Time: 10 minutes
Cook Time: 20 minutes
Total Time: 30 minutes
Course: Dessert
Cuisine: American
Keyword: muffins
Servings: 4
Calories: 418kcal

*See FAQ to make your own self rising flour

Enjoy every day of your life – THERE IS AN EXPIRATION DATE!

I got a case of peaches in Grand Junction last weekend and I’ve been trying to find any good recipe to use up my dozens of peaches; this is the best one I’ve tried! I will definitely be making these again.

I am so glad you liked them Sara!!

Christy, First of all, I love, love, love your recipes :-)…..that said, I do have a couple of things I am disappointed with. Since you changed the web page, when I scroll down to GET the recipes, the part that tells what all you can find (the yellow part) only leaves about 8 inches for me to read with. Also, when go to SAVE a recipe, with the ads on the page now, I find I have about 5 inches to actually SEE my saved recipes. Am I the only one having this problem? Again, I really DO love your site, but get a little distracted by all the rest.

Hey Patti! The new web design is optimized to resize in order to fit the screen. This works better on phones, tablets, etc. It sounds like you might be viewing it on a smaller screen somehow. On full size screens the ads are off to the side and that little yellow bar is no more than an inch tall. You should be able to scroll down to see more though?
In a perfect world I wouldn’t need ads but as it is, they barely cover the cost of maintaining southernplate some months so having them helps me keep it going and free to everyone. 🙂

Made these for dinner tonight. My family loved them!!! Soooooooo very good!!!

I am so glad you liked them Angel!!