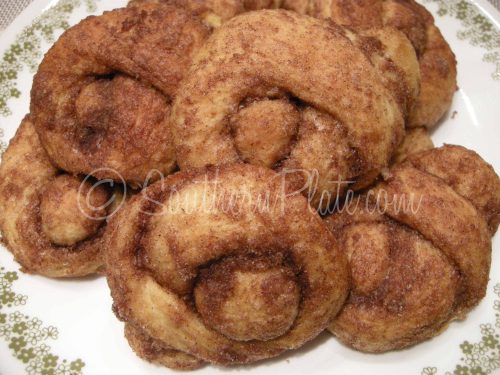 Valentine’s day at my house is all about family. Just as my mother before me, I like to cook a special meal for my kids and our traditional meal has become heart shaped meatloaf, mashed potatoes, and cinnamon love knots.

It may not sound romantic but it sure does sound like home and what could encompass more love than that? Now since I posted that menu last year and it doesn’t change, I thought this year I’d bring you one last Valentine recipe and a little spin on my cinnamon love knots.
This is the homemade version, from scratch, using the Jordan roll recipe. However, if you are lazy (and I’ll address why you should be proud of that here in a minute), you might want to refer to my original recipe for love knots which you could pretty much make with your eyes closed.

Lets talk about being lazy. So many people say it like it’s a bad thing. Me? I wear my laziness with pride. I love to do things the lazy way whenever possible. Why? Because I’m tired, of course! Chances are, if you’re lazy, its not because you don’t exert yourself, but rather because you do. We put so much of our energy into other areas of our lives: kids, spouses, work, volunteer, friends, family. If, at the end of the day, we’re too tired to make the dough from scratch and decide to use a shortcut, more power to ya. As far as I’m concerned that just means you’ve done a good job living your day to the fullest!

Now y’all be sure and read this whole post because I’m going to touch on a multitude of topics such as revisiting the blatant abuse of unfortunate eggs, essential kindergarten skills that are still in use today, non essential Math skills that I was misled to think I’d actually need, EXCLUSIVE and elite culinary terms you’ll only find here on Southern Plate, why you should always trust your inner Christy, and my own *brilliant* ideas for names of television shows I may very well host one of these days.  In other words, get comfy and sit a spell and at the end of the day you’ll have a recipe. 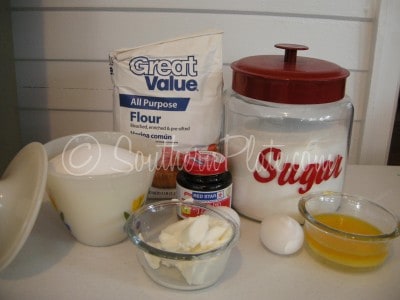 I don’t have a photo of the sugar, additional butter, and cinnamon, so we need to use our imaginations here. I could go take a photo real quick, but I just got done explaining why we should be proud to be lazy and I’d be a big old hypocrite if I got up from my cozy bed (known tonight as “the Southern Plate Office”) and trodded back into the kitchen after I’m already wearing my comfy flannel pj’s and all that. Y’all want me to set a good example, I know. ~yawns, stretches, and tucks the blanket closer around herself as she types on~

Now what I’m doing in this post is making my regular sized batch of Jordan Roll dough, then dividing it up to make an 8×8 pan of rolls and six Love knots. I’m killing two birds with one dough here. 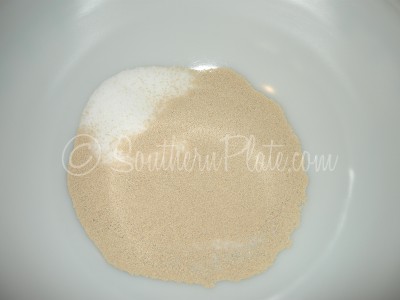 Measure your sugar, salt, 2 cups flour, and yeast into a bowl. 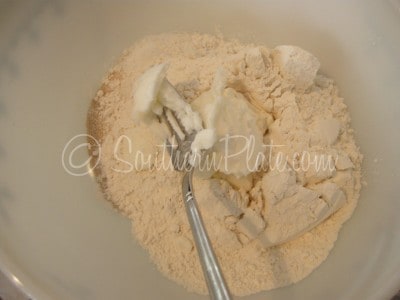 Cut in shortening with a long tined fork.

You can use a fancy pastry cutter if you want to but that’s just one more thing to clutter up my kitchen so I got rid of it years ago.

After you get your shortening cut up in there real good, add your eggs. 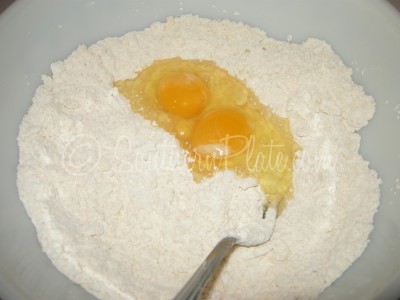 Flash was on in this picture so if it looks a little whiter that is why. 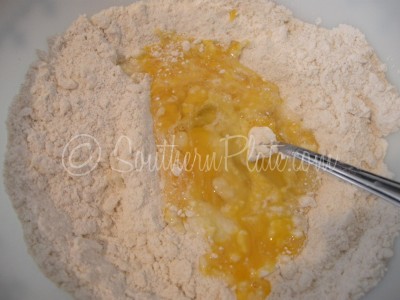 Beat up your eggs a bit.

I know they didn’t do anything to ya but sometimes things like this happen with no provocation.

Those eggs were in the wrong place at the wrong time.

~giggles~ See, I pulled the dough making part of this post from my original Jordan roll post. No sense in taking the photos twice. So I’m leaving the whole beating the eggs part up in here coz I got a lot of comments on that one. Turns out, y’all have some aggression issues and were proud to have an opportunity to work it out. Whoda thunk it? 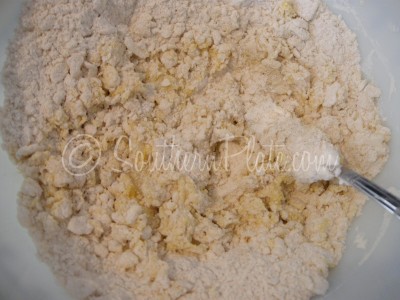 And mix them up in there.

Now we add our melted butter or margarine. You want to melt this and then give it time to cool so that it isn’t too hot.

The thing about yeast breads that is most tricky to folks is getting their liquid ingredients the right temperature. A good rule of thumb that has always served me well has been to make sure liquids are about the temperature as baby’s bath water. Yes, I stick my finger in the melted margarine, it doesn’t hurt anyone.

If it’s as warm as a baby’s bath water, but not hot, then it is a great temperature. 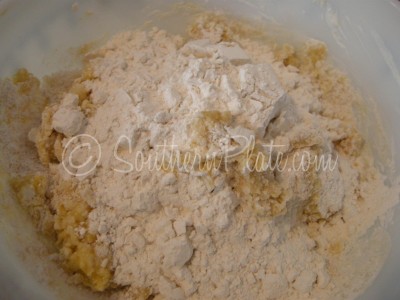 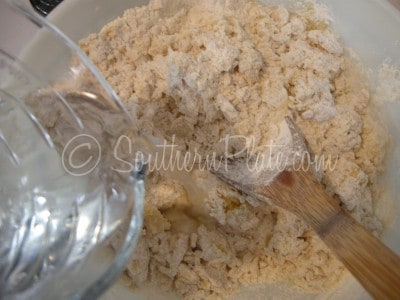 and the water, again making sure the water is the temperature of baby’s bath water.

If you don’t know what temperature a baby’s bath water is then you could always go borrow a dirty baby, I suppose… 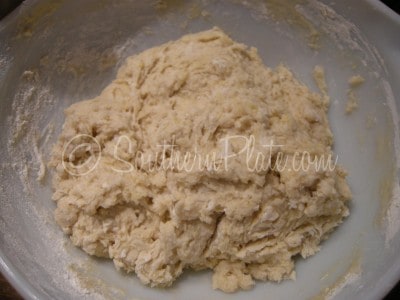 It’s going to look like a lumpy blob when you’re done. 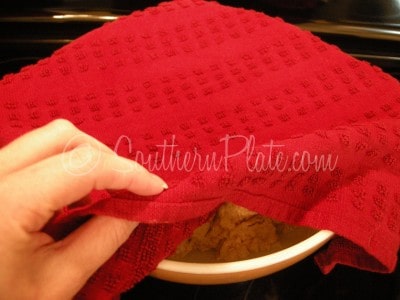 Cover that with a towel and let it sit for twenty minutes. 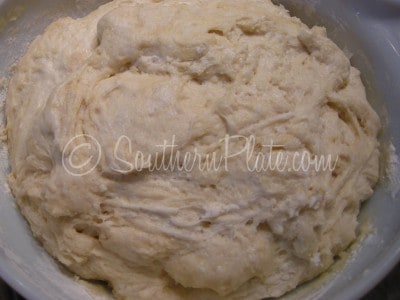 After twenty minutes, it’s going to look like an even bigger lumpy blob.

Just think of how valuable this intricate culinary education is going to be someday when you can use the phrase “lumpy blob” with confidence!

Isn’t it awesome that they actually gave me a Home Ec degree? Wonders never cease… 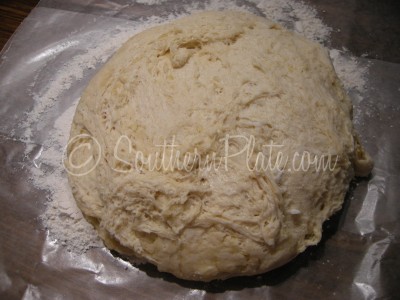 Now we need to flour a surface and pour our blob out onto it.

I just put out a sheet of waxed paper to save cleanup and sprinkle a good bit of flour over it so my dough doesn’t stick. 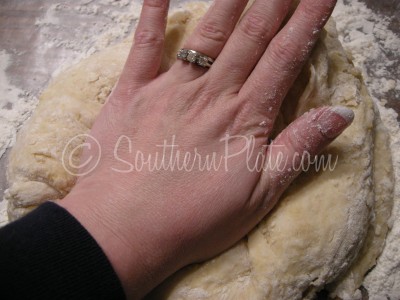 You need to knead..

~pauses and reads that again~ That just looks funny… 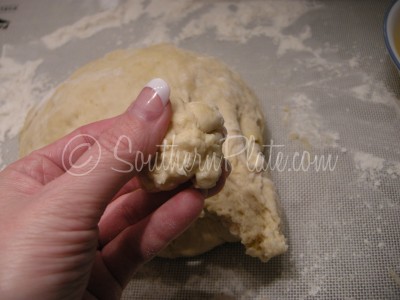 Alrighty now, here we have our big lumpy blob, all kneaded and ready to go. Pull off a small lumpy blob.

Now folks, I got a theory. I think the most essential skills in life are learned in Kindergarten.

Just think about it.

Think about others feelings.

and these don’t even come close to the MOST essential skill set of all..HOW TO MAKE A WORM OUT OF PLAY DOUGH!!!

I gotta tell ya, in high school they said you’d need all that math mess and such later on in life but not once have I had to dust off that single brain cell I have reserved for math that involves letters and odd symbols. HOWEVER, my play dough skills have been essential to me on more than one occasion and we’re gonna pull ’em out today! 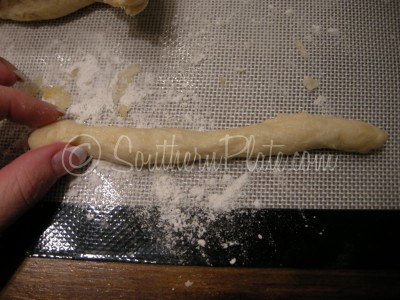 Take that ball and make a worm.

Hmm, how long is this worm? I have no idea. Five, six inches maybe. Just wing it and roll with me here. 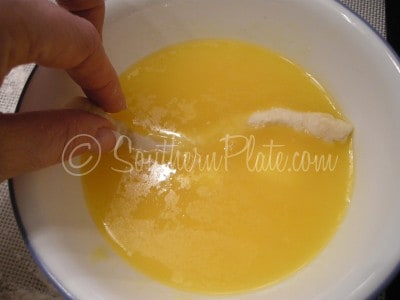 Dip the worm into some melted butter.

(okay so really I’m using margarine. Y’all remember that extensive butter supply that Mary Poppins left at Bountiful? Well the gravy train done run dry and Christy has reverted back to her old ways of supreme cheapness. Yeah, I’m horrible but I’m okay with that ~grins~). 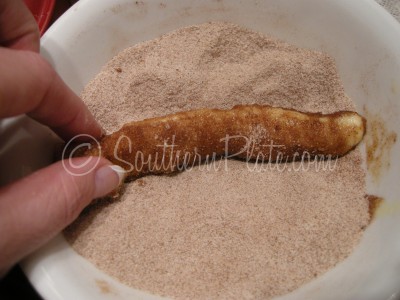 Roll him around in cinnamon and sugar.

Now at this point your fingers are going to get a little gunky with cinnamon and sugar so I recommend you lick them.

If you’re all up on the whole germ thing then you need to realize that you ARE going to cook these and that WILL kill your germies…I mean we’re making these for your family. I’ve told my kids that Mama germs don’t count because we all have the same germs as our Mamas.

Oh, alright, lick your fingers and then wash your hands and get on with it. The point is that you’ve worked hard, you’ve had a long day, and you NEED that sugar pick me up to continue on!

I’m only looking out for your best interest.

Trust your inner Christy, she won’t steer you wrong but she WILL steer you towards the dessert table ~smiles angelically~. 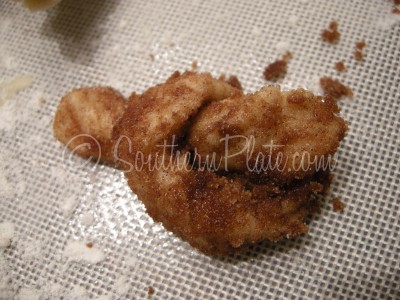 Oh, tie that worm in a knot. 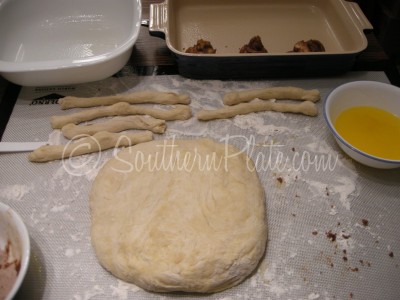 See, I got me a little station all worked out here. Don’t I look semi-organized?

Maybe that should be my show. Sandra Lee has Semi-Homemade and I could have Semi-Organized with Christy Jordan!

Think of all of the great spin off opportunities.

My home show could be called “Semi-clean with Christy Jordan!”

My parenting show would be “Semi-Sane with Christy Jordan!”

I started to tell  y’all the name of my fashion show but who are we kidding? A fashion show with me in it would have to be sponsored by blue jean and tennis shoe companies because HELLO, I’m a M-A-M-A. My uniform consists of whats clean and what I can run around in without breaking an ankle. If I happen to put earrings in or walk by a bottle of perfume on the way out the door then I’m about as high falootin’ as I get.

Oh my gosh, Did I tell y’all I met Harry Connick Jr this past weekend? I think I did. But did I tell  y’all that I borrowed and wore RED LIPSTICK when I did? I’ve never wore red lipstick in my life. I felt so daring. Southern Baptist raised gal walking around in red lipstick. I could just feel fire and brimstone. 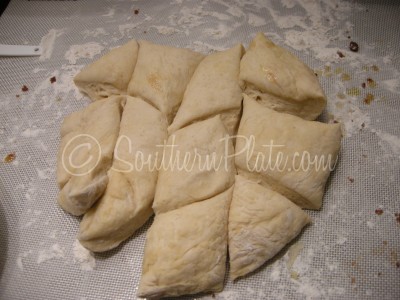 Now I took the rest of my dough and just cut it up for rolls with my trusty pizza cutter. Last time I showed these someone told me they weren’t pretty at this step and they were right – but I’m cool with that, too.

I’m plannin’ on eating them, not framing them.

See how liberating being lazy is?

Now cover up your rolls and love knots and put them in a warm place for twenty minutes so they can rise again. 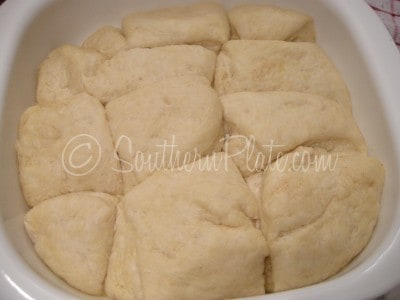 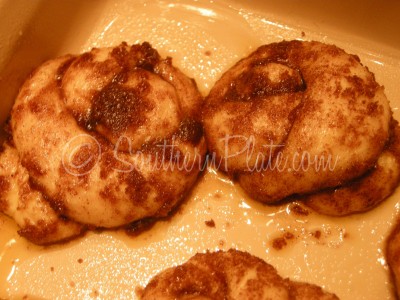 And you will tawk wike Elmer Fudd.

Because on Valentine’s day, it is fun to tawk wike Elmer Fudd. 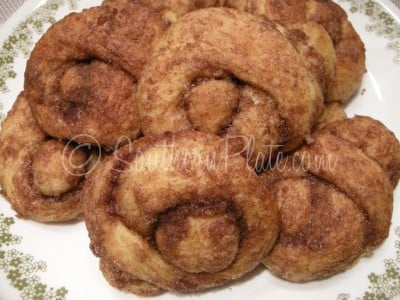 Now bake them both at 350 for twenty to twenty five minutes. Yummikins!

When the come out of the oven brush your rolls with melted butter. I don’t have a pic because the kids and I were hungry and the rolls just vanished. ~looks innocent!

I usually serve my love knots as a side dish usually but this year will serve them as dessert by whipping up a little icing. 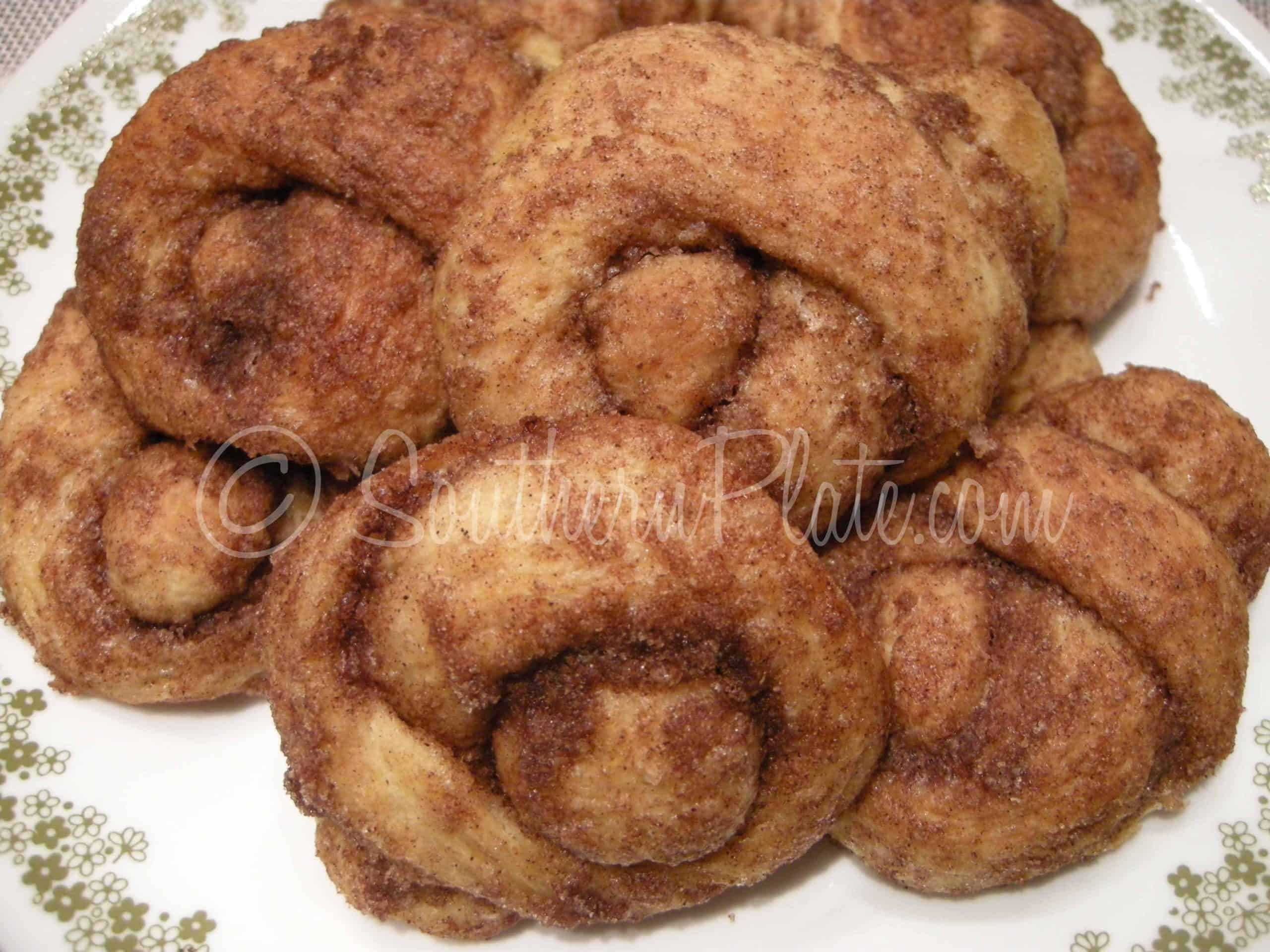 For the Jordan Love Knots:

For the Cinnamon Sugar Mixture:

For the Quick Icing:

Voila! Dinner rolls and dessert are made! I also have a cinnamon cream cheese icing on my original love knot post if you’d like that one.

I wonder if Christy needs more quotes on her quote page? Why yes, she does! ~grins~

(you know, ever since joining Facebook, talking about yourself in third person just never gets old…)