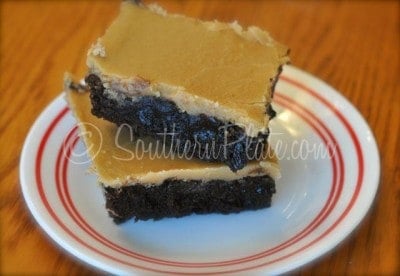 I’ve lost count of how many of you have tried this icing since I first brought it to Southern Plate back in 2008 on Red’s birthday cake. Our family tradition has us putting it over a yellow cake but the combination of chocolate brownies paired with this old fashioned boiled icing is a whole new level of old fashioned decadence – so much so that I’m devoting a whole new post to it! 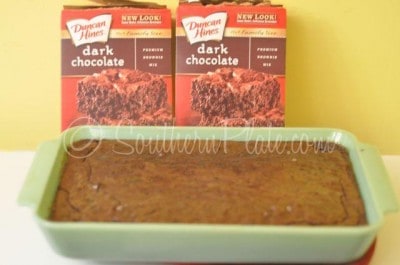 We’re gonna start with boxed mix made brownies. I used two boxes of mix to make mine extra thick. If you do that you need to cut your oven temperature down to 325 and add about fifteen minutes to the baking process.

As far as which mix to choose goes, I usually get Kroger brand or some other generic but when I went to Krogers this brand was on sale for $1.00 a box. I’d go for whatever is cheapest where you shop because I’ve never met a brownie mix I didn’t like :).

You don’t have to use two boxes of mix, one is fine and you get to taste more of the icing!

You can also make them from scratch by using your own recipe or Susan Spencer’s Grandmothers recipe for Blue Ribbon Brownies.  The peanut butter icing will take on the star of the show so go with whatever you prefer and what you have time for but as for me and my house, we will make them from a mix today.

Folks that turn their noses up at anything that was baked for them, be it from a mix or completely from scratch, don’t deserve to have people making them brownies anyhow. Snootiness doesn’t bother me though, because that just means there is extra room in my life for good hearted folks with more sense 🙂 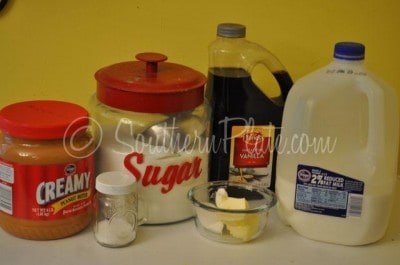 For our icing we’ll need: Peanut butter, sugar, a bit of salt, bit of shortening and margarine, little vanilla (I really do need to get a smaller bottle coz eventually someone is going to think they have to go buy a gallon), and some milk. 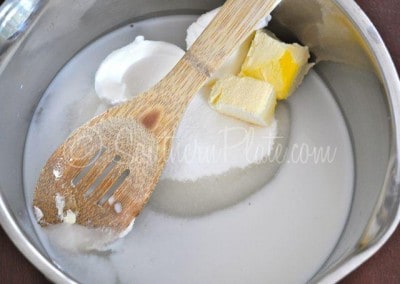 Place your milk, sugar, shortening, margarine, and salt in a good sauce pot and put this over medium heat.

Stir constantly while you wait on all of it to melt and come to a boil. 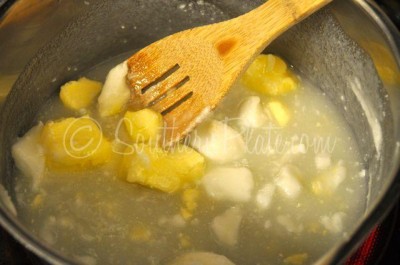 This is what it looks like as it starts to melt.

My photo turned out with more yellow than it actually had so ignore that. Clearly, I’m not seeking accolades for my food photography. 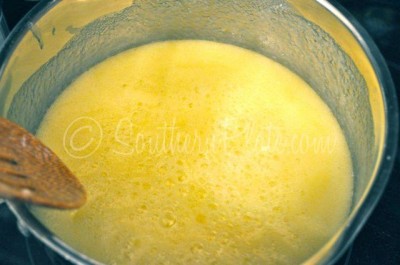 This is the icing mixture as it has come to a boil.

What you are going to do is stir it constantly until it comes to a full rolling boil and then stop and let it boil on it’s own (no stirring) for two minutes. 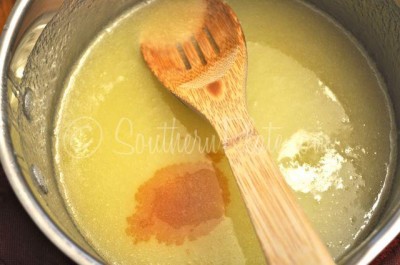 Remove from heat and pour in vanilla. 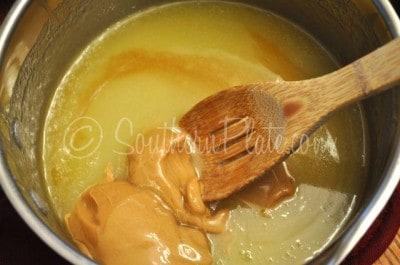 Add in your peanut butter and stir quickly until it is all melted and well blended.

Folks, I’m NOT kidding about stir quickly here. This sets up fast. 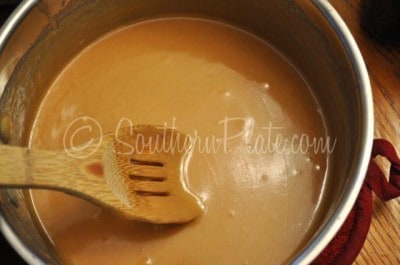 Now this is ready to pour. 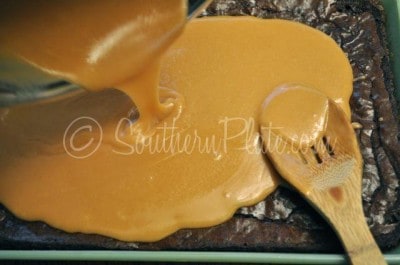 Pour over your cooled brownies and spread to cover it all. 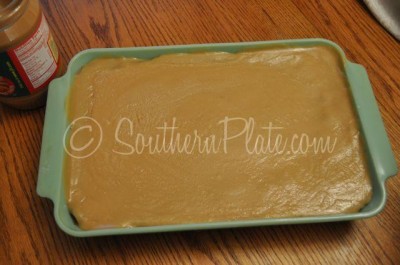 Mine would have been all smooth but I was trying to take photos at the same time and that ate up some of the time I should have been spreading.

You can occupy yourself during this time by licking the sauce pot clean once it cools enough to let you!

Go impress people because you rock. Seriously, you do. Look what you just made! 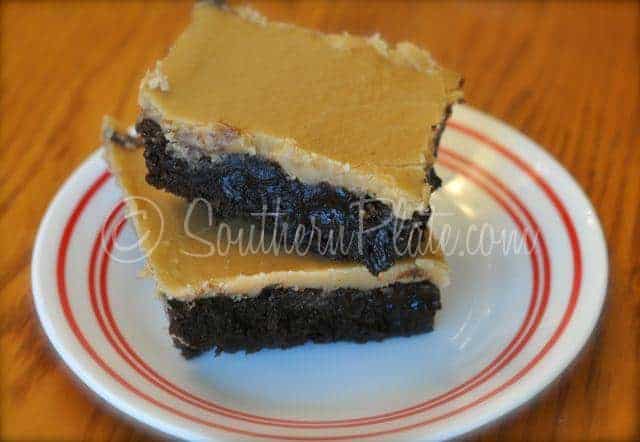 Print
Ingredients
Instructions
For the Icing
3.5.3251
*This recipe works fine for a 9×13 or 8×8. If making an 8×8 pan of brownies, I’d still use this same amount of icing and just let it be thicker.

I hope you’ll take time to read the story of why this icing is so special to me by clicking here.

You can also find the story and this icing recipe on page 258 of the Southern Plate cookbook.

I want to thank you again for all of your kind reviews on Amazon.com – My mother actually read them all the other day!

“Smile and give your face a holiday”

Doris says, “This was my Mom’s favorite saying.” Thank you, Doris!

Submit your quote by clicking here.

WOW! So a couple of things – 1. This stuff tastes amazing!! 2. Definitely heed the directions that this recipes works for both the 9×13 or 8×8 pan. I used a 9×13 pan but doubled the recipe because I didn’t want a thin, skimpy layer of icing. Holy cow. I have twice the amount of icing than I do brownies. I haven’t cut into them yet, but I’m guessing we’re gonna need a huge glass of milk! 3. I didn’t have milk, margarine, or shortening. So I used instant non-fat dry milk made per directions on that package, butter, and coconut oil. It set up quite nice. Thanks for posting this! Easy peasy recipe and I feel like Suzy Home-maker!

LOL, yes it makes a good amount of the icing. So glad to hear the substitutions worked out!!

HELLO I AM CEDRIC PETERSON, I AM TRYING TO FIND ANY ONE THAT’S SELLING REAL BROWNES WITH NUTS AND THE SWEET TASTING PEANUT BUTTER ICING. I AM HOPING THAT YOU CAN HELP ME PURCHASE SOME .

I didn’t pay attention too well to the directions, so I did not let the frosting boil for two minutes AND i poured it on a still warm pan of brownies. It was fine, everyone enjoyed them, and we licked the frosting pot. It is not a hard frosting as far as texture (fudge had me thinking it would be a firm solid coating on top), but it’s in the casserole dish, so it worked out fine.

This frosting sounds so super yummy! ….well like most of your recipes!
Your vanilla bottle reminds me …LOL….I have a big bottle of vanilla my F-in-L brought me from Mexico and my sister saw it in the cabinet and thought I was hiding my alcohol!

LOL, that is too funny!! I am so glad you are enjoying the recipes Margaret!!

A couple of weeks ago I made homemade brownies and wanted to frost them. Soooooo…I started searching and as soon as I saw this, I knew the search was over! 🙂 The peanut butter frosting is to die for. My sons girlfriend ate over half of a 9×11 pan of brownies!! I could just eat the frosting…forget brownies! LOL

I am so glad they were such a hit!!! I could just sit and eat the frosting too Dawn, great minds think alike!!

These look fabulous! I can’t wait to try them.

I hope you get the chance to soon Jan!