I don’t know if you’re ready for the taste sensation that is Rolo cupcakes. We bake an ooey-gooey caramelly Rolo inside each moist dark chocolate cupcake, which is topped with brown butter icing and toasted pecans. 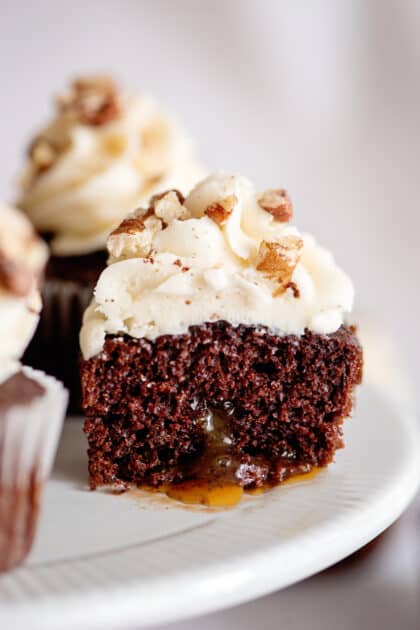 You are going to LOVE these Rolo cupcakes with brown butter frosting! I actually have Taste of the South magazine to thank for bringing this recipe into my life. It jumped out at me and as soon as I had my first bite, I know I’d be making these cupcakes for my grandkids one day.

We start with a Devil’s Food cake mix to make the dark chocolate cupcakes. Then we add a Rolo to each cupcake before baking, which makes sure each tender and moist cupcake has an ooey-gooey delicious caramel center. But wait, there’s more! We then top each Rolo cupcake with brown butter icing and toasted pecans. When I say it’s a flavor and texture sensation, I mean it!

Have you ever had brown butter icing? I hadn’t ever had it until I made it for these and WOW, that stuff is good! It tastes like butter that has been slightly turned into butterscotch, then with more butter added in and some sugar to top it off. It’s the perfect sweet topping for our homemade chocolate cupcakes.

So below is the recipe… please don’t trip over yourself getting to the grocery store. Remember, I know we’re all excited, but I need you to walk – don’t run – because when we all walk we all get there safely. My inner kindergarten teacher is talking here again. I’m afraid she’s just telling y’all to walk so she can get to the Rolo aisle first… 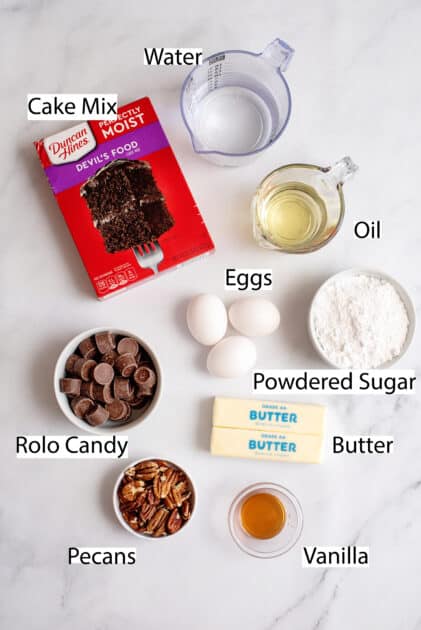 How to Make Rolo Cupcakes 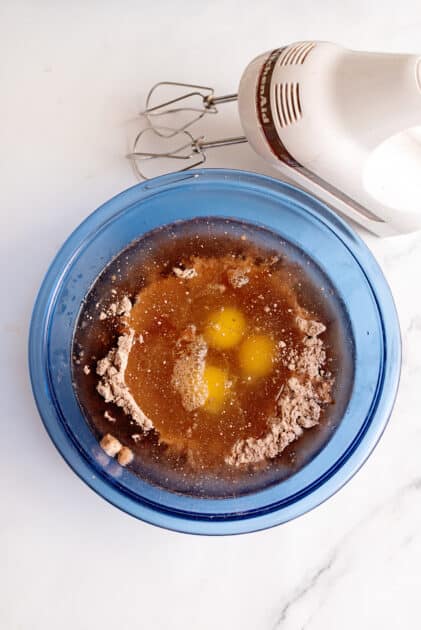 Place your cake mix, eggs, vanilla, and oil in a mixing bowl. 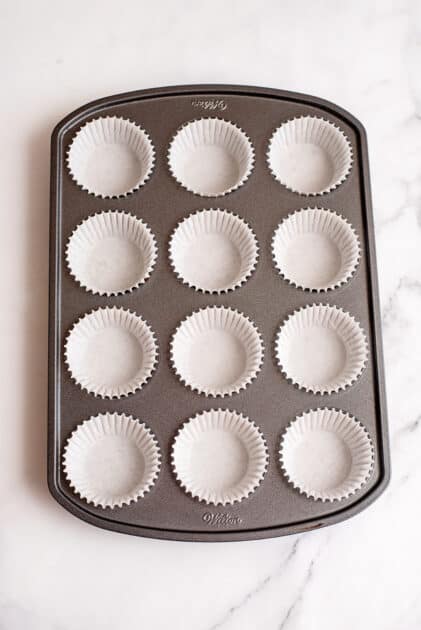 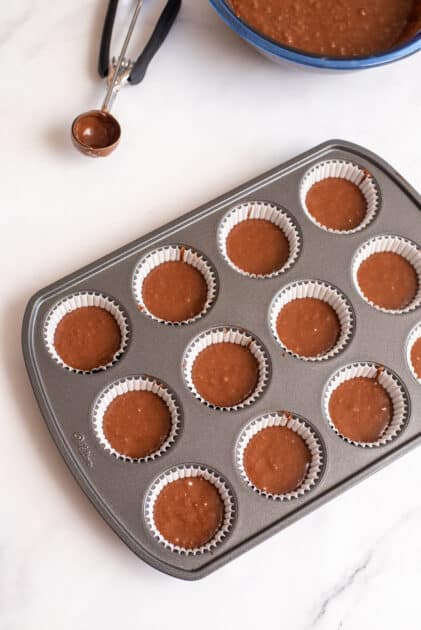 Divide your cupcake batter among the paper-lined muffin cups using a cookie scoop.

Umm, you’re gonna need two muffin pans for this. Did I mention that? No? Well, I just did. I’m all informative like that.

Unwrap the Rolo candy and place one in the center of each chocolate cupcake, then push it down a little with your finger.

Now the recipe says to make sure the Rolos are covered with cake batter so I got a butter knife and just kinda swished some batter over each one. It was easy and just took a few seconds. 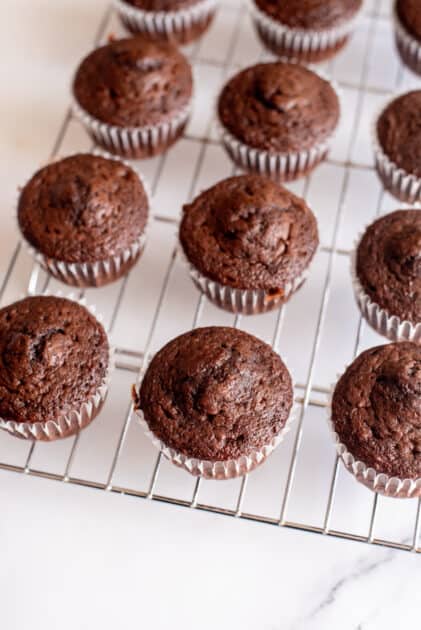 Let those cool for about 10 minutes in the muffin pan and then remove them to a wire rack (keep them in the liners though) to cool completely. 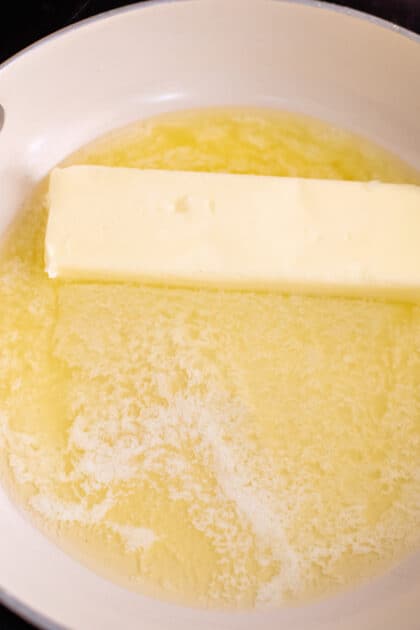 Now it’s time for the magic to happen! I know, I know, putting a Rolo in a cupcake qualifies as pretty magical already to me, but this is even better!

Place a stick of butter in a small skillet over medium heat. 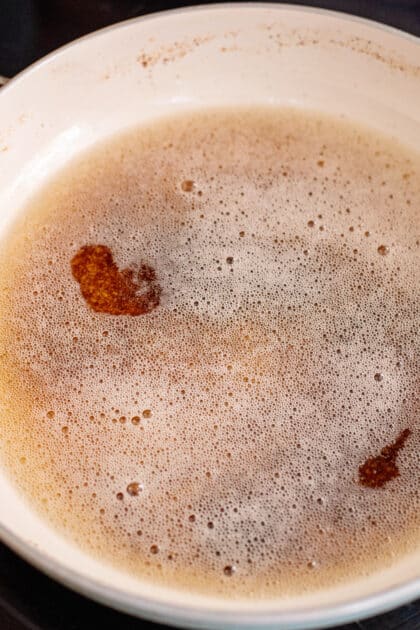 Stir it every now and then and let it cook until it is brown like this (about 10 minutes). 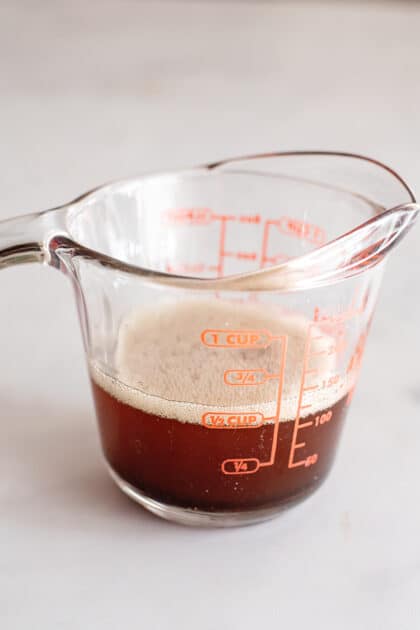 Pour that into a cup or bowl or whatever you grab first that is heat proof and refrigerate it for 30 minutes. 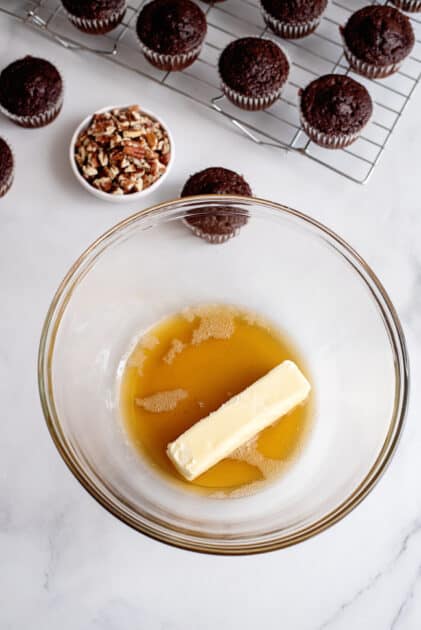 Take your deliciously browned butter and put it in a bowl with your other 1/2 cup of softened butter. 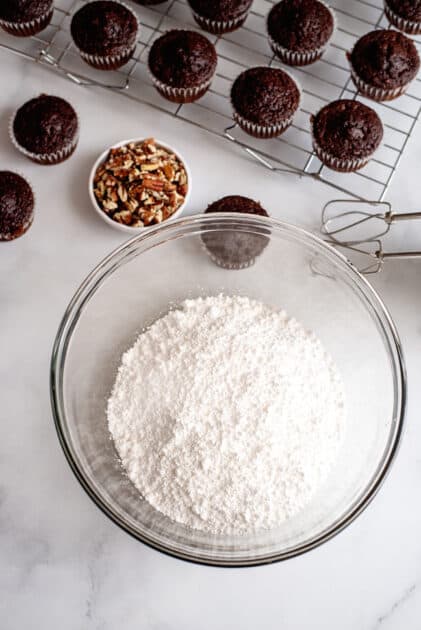 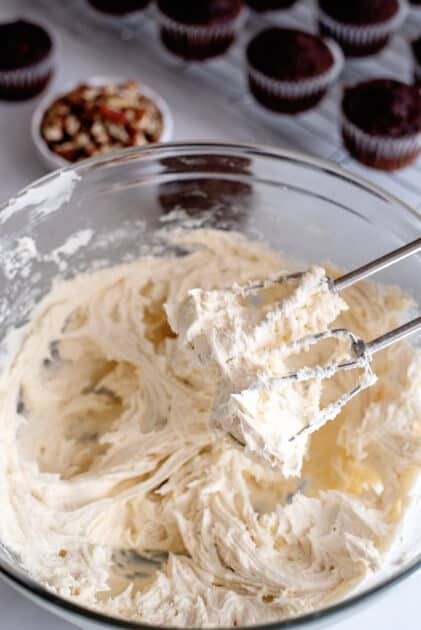 Beat the living mess out of it, scraping down sides as needed, until it is all smoothified.

New word just for you. 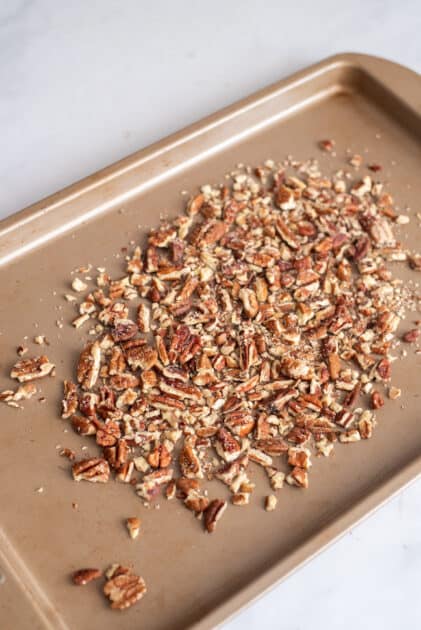 Okay, about the toasted pecans… I had every intention of skipping this step. I mean there is no law that says you have to follow every recipe to the letter, you know? But after I made the frosting, it got the better of me so I dipped a pecan half into it and had a taste.

SWEET BABY MULE PULLING A STEAMBOAT THAT WAS GOOD!

So I got a good cup or so of pecan pieces, scattered them on a baking sheet, and placed them in the oven at 350 for about 5 minutes or so, until lightly toasted. 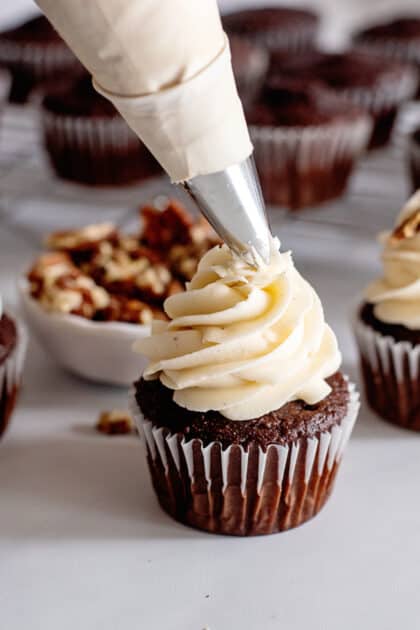 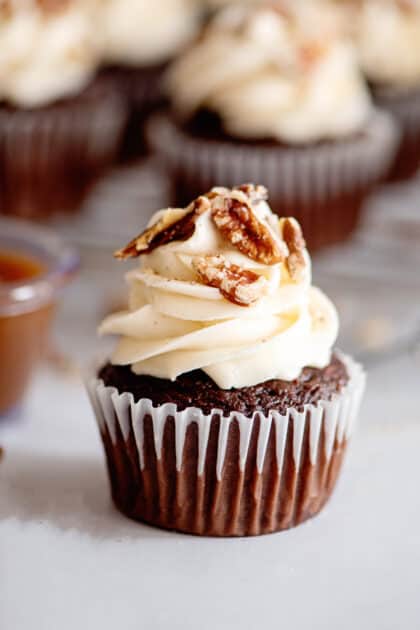 And top with a few pieces of toasted pecans. 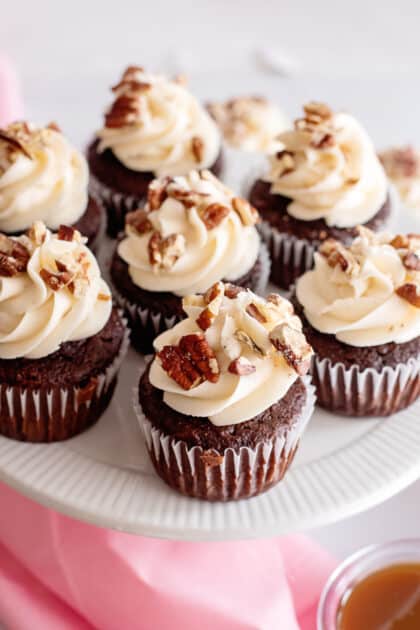 Then get ready for a cupcake unlike any you’ve ever had before! 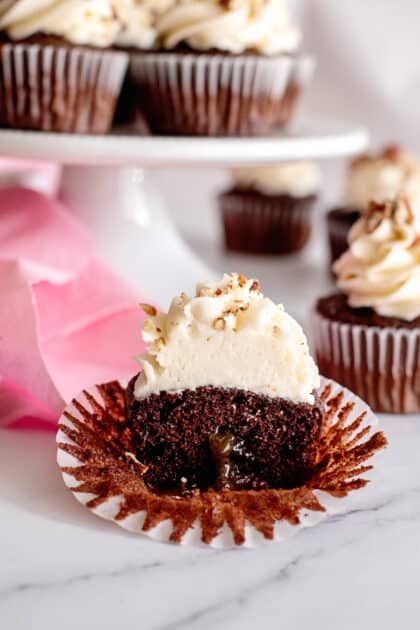 Okay, here’s another photo of the melted caramel inside because I couldn’t resist! How good does that look? Enjoy your Rolo cupcakes, folks!

Red Velvet Cupcakes Made From Scratch 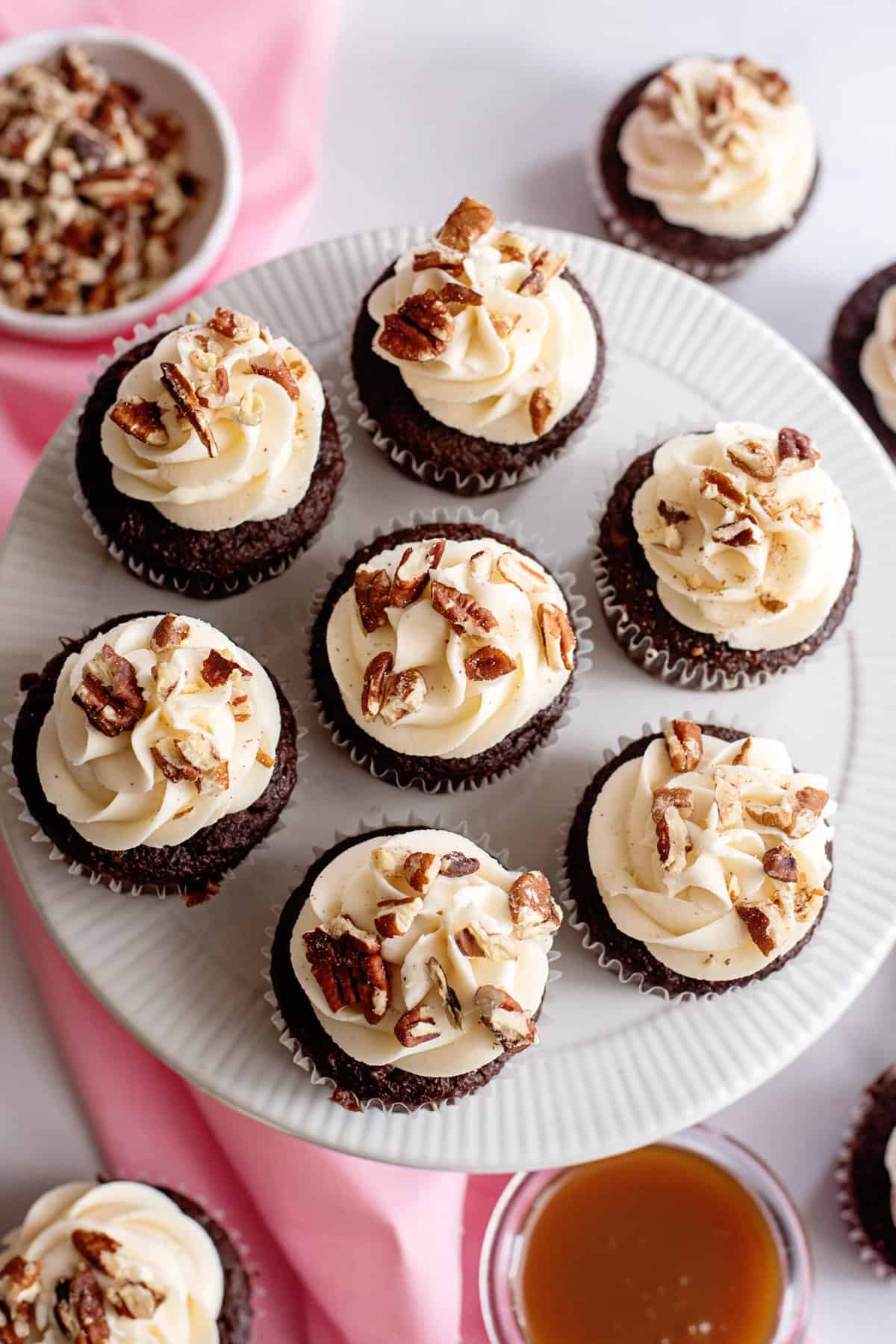 The recipe was printed with permission from Taste of the South Magazine and excerpted from Southern Cakes Special Issue. Original recipe entitled “Caramel Surprise Cupcakes”.

“Do your little bit of good where you are; it’s those little bits of good put together that overwhelm the world.”

Looks good but was so dissapointed! Frosting was great! I followed recipe to the letter and when done and cooled the rollo candy became a hard lump in the bottom of the cupcake. no ooey gooey caramel running out like the picuture and my imagination had envisioned. just a hard chew caramel inside a fairly good chocolate cupcake with yummy frosting.

Hi Christy,
I just wanted to say that I am a huge fan. I enjoy reading your blog and love the recipes. I have come across some southern recipes calling for whole buttermilk. I can not find whole buttermilk anywhere, just the lowfat version. When a recipe specifically says whole buttermilk, can I substitute it with lowfat or do you have any other suggestions since whole buttermilk is not available in my area? Thanks!

You should be able to substitute it without any problems.

I was reading about how some of you are having trouble with the Rolos sinking to the bottom. I have a suggestion: I have seen a lot of chefs on the TV rolling their blueberries in flour to prevent them from sinking to the bottom. Why not try rolling the ROLOs in flour before putting them in the batter? It may help. While I have not tried this myself, I would love to hear what happened when you did.

I had the problem others have mentioned about the Rolo candies sinking to the bottom and sticking to the cupcake liners. No oozing caramel here. 🙁 I followed the directions exactly…

I made the cupcakes and they looked great but unfortunately the rolos sunk to the bottom. They were just a hard chewy glob. What did I do wrong? The batter seemed extremely runny. Is there too much water added? Help! I think it’s a yummy looking recipe!

It does sound like your batter was too thin.

Goodness, Christy! You had to do this, didn’t you? LOL.
I was looking to see if you had a recipe for a delicious dessert with a most inelegant name: dump cake. Easiest thing EVER!. Combine 2 cans of pie filling, flavor(s) of your choice — I’ve been known to put one kind on each end of the pan — and place them in a 13×9 baking pan. Drain a small can of crushed pineapple and layer it over the top. Then (and here’s the weirdness), DUMP an entire box of dry yellow cake mix over the top. Drizzle the mix with a stick of melted butter (margarine) and add half a cup of chopped pecans. Bake for about 35 minutes at 350. My uncles LOVE this.
So super easy and delicious, it ain’t funny! And you can use all generic products and it won’t hurt the result a bit. It’s a major hit at picnics and church fellowship dinners!