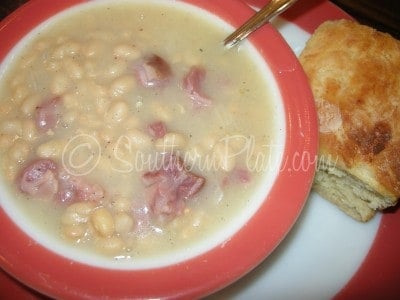 ~giggles~ Just kidding. Y’all know I can’t bring you a recipe without talking your ear off first! Senate Bean soup is a big old tradition in D.C. that has been served in the Senate restaurant every day. By the way, where IS the Senate restaurant and how do I get to eat there on my next trip to D.C.?

So anyway, the recipe is all over the place and several restaurants proudly serve Senate bean soup on their menu. It’ s a famous soup that is flavorful, filling, and comforting. But in my mind, it needed to be made a bit more accessible for folks who don’t have all day to cook their beans or forget to soak them the night before (my most common problem). So I developed my own shortcut recipe and sent it to the ultimate judge: Mama.

Mama loved it. Grandmama loved it. Daddy loved it, and I Loved it. That about sums it up so here we go… (my tangent appears on down in this post) 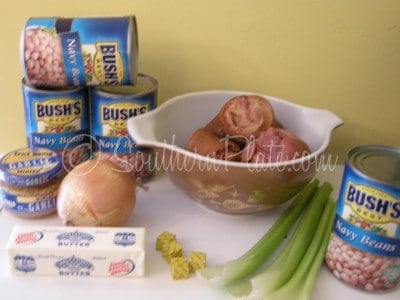 Normally the recipe calls for dried beans, cooked from scratch. While I’m a huge fan of dried beans, I wanted to re-do this soup so that someone could work all day and then come home and be able to whip it up for supper, so I used canned beans.

You can use any leftover ham you have, though. I like the smoky flavor the ham hocks give this soup but if I’d had leftover ham I would have used it instead. I love using up leftovers!

*Ham Hocks may be purchased near the hams. They are usually two or three dollars for a couple of them. 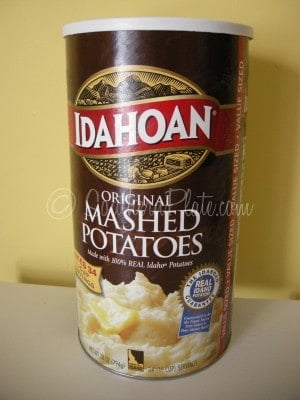 Now y’all know my take on these. I didn’t even know such a thing existed until I was sixteen. I was invited to dinner at a friend’s house and her mom sent me into the pantry to get the potatoes. I went in there and looked all over the place trying to find the bag of potatoes and came out empty handed. She walked right in there and came out with a box. A box? I had to have that one explained to me and then went home and explained it to Mama! I love pretty much anything that makes life easier but reserve instant potatoes for use as soup thickeners.

Don’t get me wrong, if instant potatoes are your thing then fly your flag high and I’ll salute it.

Long as no one tries to get me to eat seafood I can easily live in peace with instant potatoes and folks who put sugar in their cornbread. 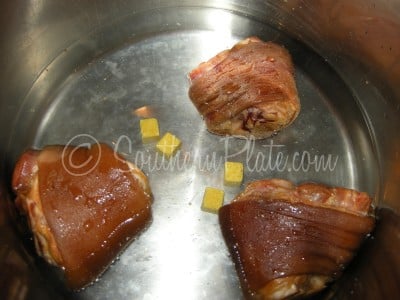 Okie dokie so here’s what I did. I put my ham hocks (which are already smoked) in some water, added my bullion cubes, and turned the eye on to let them simmer and soften up a bit so I can cut the meat off of them. *We only use smoked turkey legs now as we no longer eat pork but the turkey legs work great! Use on in place of these pictured.

The turkey legs are also going to add that yummy smoky flavor to the water which will make it richer along with the bullion cubes.

I tend to use bullion cubes a lot because they are so much cheaper than broth. I buy a big old thang of ’em at Sam’s Club when I have a membership (which I do right now) and when I don’t I just go and stand outside the door of Sam’s in a trench coat and fedora and wait until some young and trusting college student comes by and give ’em a whistle “Psst. Hey kid…” ~pulls out a crisp ten dollar bill and waves it enticingly~ “look kid, I need somethin’…reckon you could help a gal out?” This is the part where I either smile sweetly or squint my eyes in a threatening fashion … depending on their response thus far.

I have a bit too vivid of an imagination, I know. So if I need bullion cubes and don’t have a membership at the time, I just ask Mama to get them for me. Sometimes I even break down and pay double at the grocery store. Still cheaper than broth.

So my point is the first thing you need to do is cook your hamhocks.

Put a lid on that pot and let them simmer while you do do everything else, preferably about thirty minutes or so. 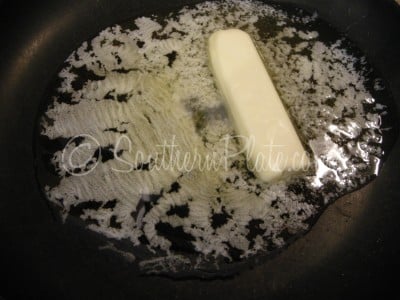 Then melt a stick of butter or margarine in a skillet. I’m using real butter, shocking I know.

It was leftover from one of the photo shoots for the cookbook. Y’all aren’t going to believe this but..

When I signed on for this cookbook deal, I thought I’d have to make every one of the dishes to be photographed. I talked to the photographer and she set shoot dates and such I was thinking “How am I going to make sixty or seventy things in two days and NOT look like death warmed over in these photographs taken on the same days?”. Me and Mama had a time trying to turn that one over and come up with a way because lets face it, at the end of the day when I put supper on the table, I’m not exactly looking my best.

Well guess what? I was introduced to the wonderful world of “food stylists”. ~blinks and nods~

Seriously, I had no idea what that was, either. I pictured my food wearing feather boas and sashaying down some runway amid camera flashes and reporters feverishly scribbling notes about how the gravy glistened but didn’t quite form itself to the biscuits like it did last year…

Okay so if y’all ever write a cookbook here’s what you need to know. A food stylist shows up at your house with boxes and boxes and boxes. Boxes of wonderful things. Plates, ingredients, and…food. Already cooked. Already prepared. It’s kind of like Mary Poppins (which is what we’ll call her as I’m unable to give her real name for fear she will be kidnapped once folks know about her magical powers). Remember when Mary put that bag on the table and then started pulling out lamps and furniture and all of these things out of it?

POOF there’s a cake! Poof! There’s caramel corn. POOF! There’s my grandmother’s chocolate pie! (Wait til I tell you what a Prop Stylist does!)

My eyes just about bugged right out of my head and I was trying to be all nonchalant – like people walked in my house everyday and produced perfectly presented pies and cakes and such right there in the middle of my kitchen.

Meanwhile my husband and kids kept coming in and whispering “Are we gonna get to eat that? Do you think they’ll let us have some?” Their eyes were every bit as big as mine but they hadn’t gotten the memo on how we were going to try to pretend we weren’t the Beverly Hillbillies and Mary Poppins hadn’t just unveiled our new cement pond.

And let me tell ya (by the way, on Southern Plate, it is perfectly acceptable to begin a sentence with “and”), when I say they were whispering, I want you to know that I have failed miserably in teaching a single person in my household the correct volume of a whisper. My husband has one of those voices that sounds to me like he is yelling all of the time and so as a result my kids inside voices SOUND LIKE THIS EVERY TIME THEY TALK.

I had a point here…

Oh yeah, Mary Poppins also brought all sorts of yummy ingredients in case she needed them during the course of the shoot. You know, sometimes you just wanna whip up a meringue or make a custard on a whim and while I truly believe (after what I’ve seen) that she could do so with just a snap of her fingers, she needed to have the proper ingredients to put on the counter so she could wiggle her nose and make them poof into whatever it was she desired at the moment.

Sidenote: Yes, my family did get to eat all of that food.

So…when she left, everything hopped back into her magic bag EXCEPT…

When I opened my fridge I was kind of surprised.  You see, butter is expensive. It’s like…$3.00 a box! I almost turned tail and ran out into the road to call for her on the off chance that she wasn’t already halfway to Birmingham. But they had left long ago (by the way, on Southern Plate, it is perfectly acceptable to begin a sentence with “but” as well) and I knew it was too late.

So I closed the fridge. I left the kitchen. I thought about all of that butter.

I lasted all of one hour before pulling out two sticks and baking something.

I baked and baked and baked and baked. I even softened a stick and smeared some on Saltine crackers for me and the kids. My husband turned up his nose at the saltine but I explained to him “it’s real butter…you’ve got to try it.” and he ate it, not quite getting the significance but knowing it would shut me up – one of his primary motivations for doing most things, I think.

We ate butter, y’all. ~sighs~ and it was sublime.

And after a while, I only had one stick left.

And so I put it in this soup. For y’all. Because I love you and I want you to eat butter, too.

But you know..the thing that gets me is that…~sighs heavily and hangs her head~ Margarine is currently .60 a box and butter is about $3.00.

How about I compromise and buy butter on occasion? I just can’t bring myself to do it every day. 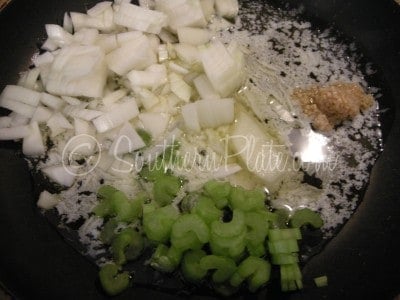 So chop your celery and onions and add that to your melted butter (or margarine) along with the minced garlic. 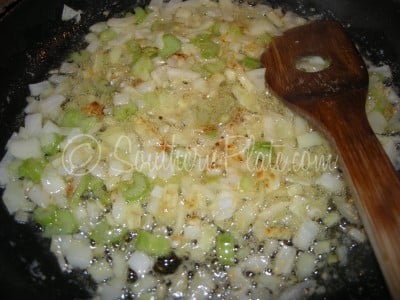 and cook it until it is browned a bit. 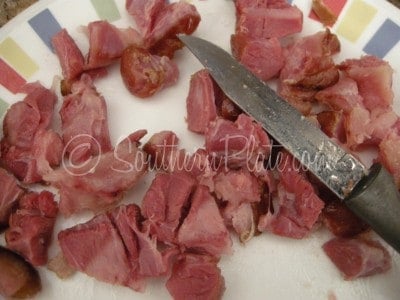 Then take your turkey legs out of the pot and let them cool a bit before cutting off the meat and chopping it into little bits. 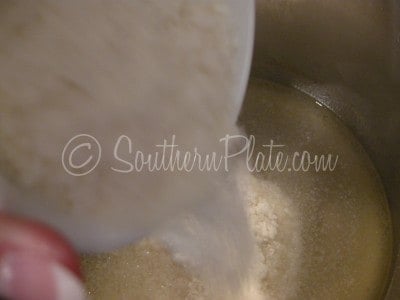 Add a cup of instant potatoes to the broth you cooked the ham hocks in. 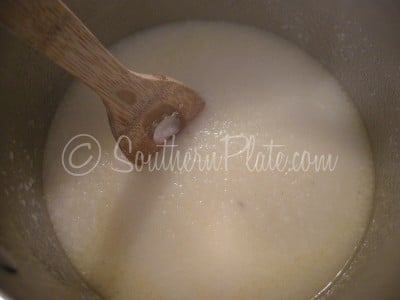 Stir that up. This is going to give your soup lots of body. 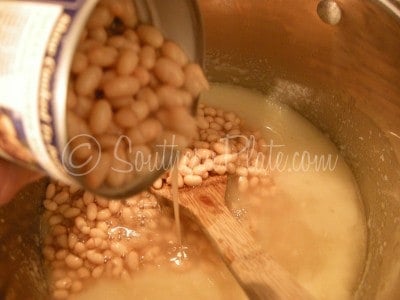 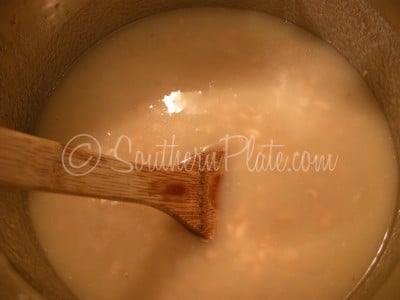 Stir that up, too. 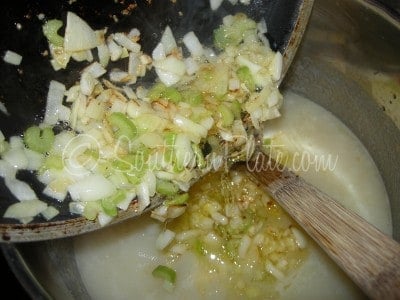 Add your veggies, butter and all.

~lip quivers as she thinks on her last stick of butter~ 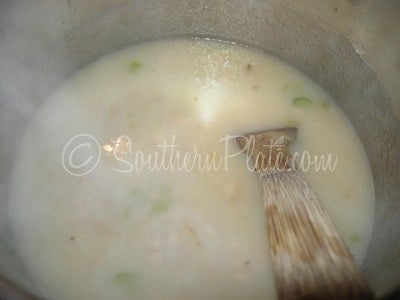 (pretend you see a picture of me adding ham) 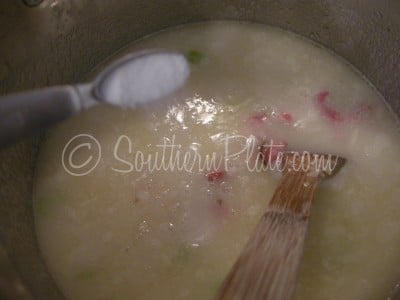 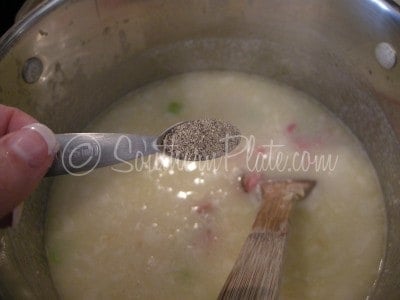 Stir all of that up and simmer for about half an hour or so.

BUT if you want, you can just cook it until its heated all the way and then serve it.

This freezes VERY well. I took my leftovers and put them in a mason jar, leaving plenty of head space, and froze it to eat later.

“Later” ended up being the very next day but still… 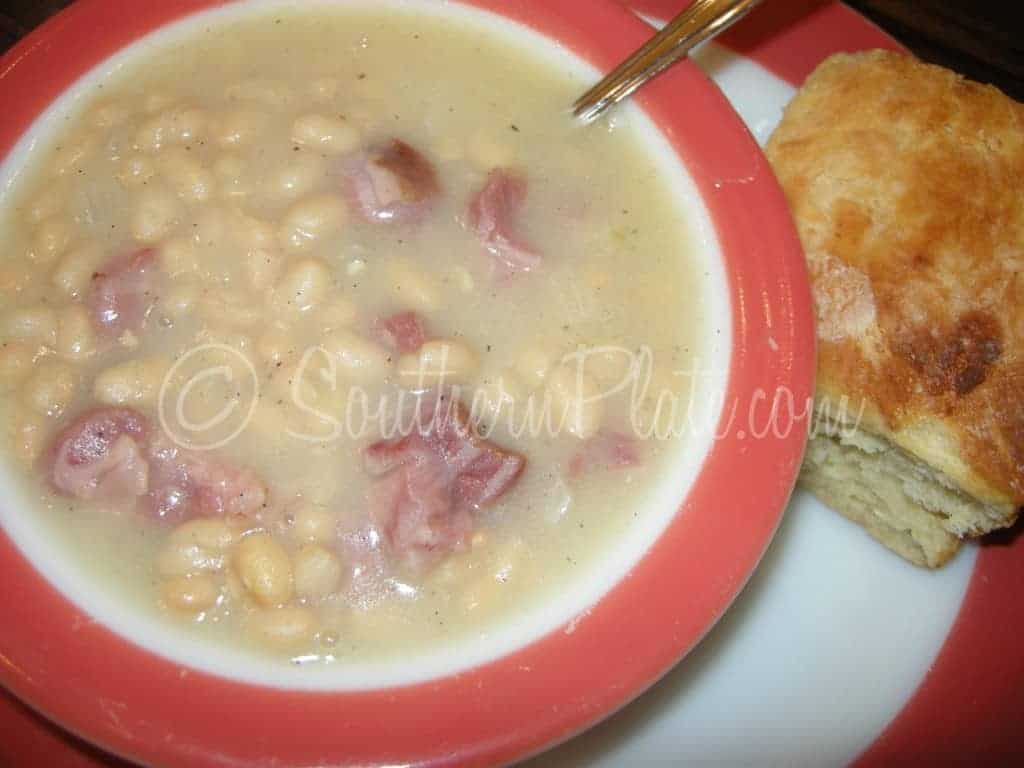 Write your sorrows in sand and your your blessings in stone.

< Previous Post
Jordan Rolls – And Why Interruptions Are The Key To My Success
Next Post >
Southern Plate Cookbook Update!