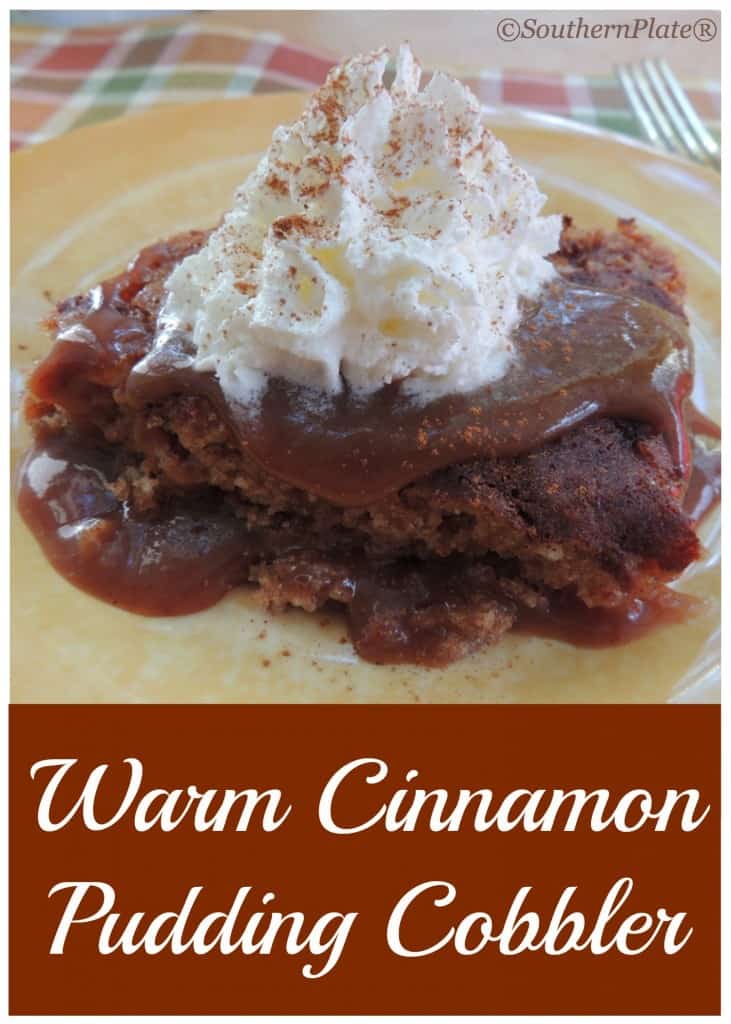 This Warm Cinnamon Pudding Cobbler recipe is one I developed as fraternal twin to Mama’s Chocolate Cobbler for my second book, Come Home To Supper (which is currently less than $12 on Amazon!). Cobblers like this were always family favorites growing up. Mama made one at least once a week. She loved them because of how budget friendly it was, she always had the ingredients on hand, and they don’t even require an egg!

My family, though, has taken a love for these cobblers to whole new levels. When my son was 9, a television crew had set up in my kitchen to record me making Chocolate Cobbler for tv. Brady was my taste tester at the end. He was supposed to take one bite and then I turn to the camera to close out the segment. All went as expected but as soon as the cameras stopped rolling the crew burst out laughing. It turns out that Brady took his one bite and then as I turned to close the segment, his eyes got real big and he leaned down and started eating it as fast as he could just in case anyone planned on taking the bowl away once we were done!

My Katy has friends who have several food allergies. Some are allergic to milk, some nuts, and some eggs. I can make chocolate or cinnamon cobbler for them because it has no nuts and I just switch the milk to rice or almond milk (almond milk if there are no nut allergies) and it works out just fine. I always love making one of these for a group dessert if there are kids with allergies I can accommodate with it because it means they get to eat the same thing as everyone else for a change.

Warm Cinnamon Pudding Cobbler is an amazing fall treat. You know right off that your house is going to smell amazing, right? But can you imagine a moist cinnamon cake layer floating atop a cloud of warm brown sugar and cinnamon pudding?  This is another show stopper and the fact that it is simple to make, uses simple ingredients (one is water!), and economical (not even an egg!) makes it the perfect dessert to make today.

Be sure to print this one off, or better yet, write it down in your own handwriting. Then, take it into the kitchen with you while you cook so it gets plenty of batter drips and cinnamon smudges for character. This is one to be passed down for generations. 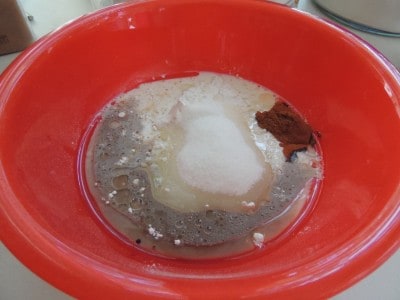 First, we gotta mix us up a batter. For that, place flour, white sugar, oil, milk, vanilla, and cinnamon in a medium sized bowl and stir it up real good until it is smooth and most of the little flour lumps are gone.

Sure, you can whisk the sugar and flour together first to help prevent lumps if you are in a preventative mood but I’d rather dump it all in there and just stir on the whole a bit longer. 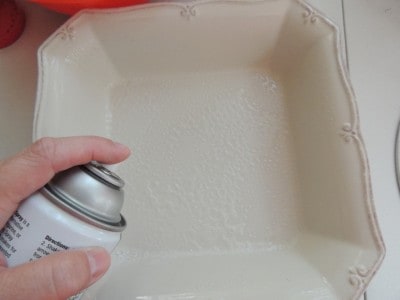 And just in case anyone is wondering, you can double this recipe and just make it in a 9×13 pan and it will turn out just fine.

Actually, it will turn out better than fine because you’ll have double the amount! 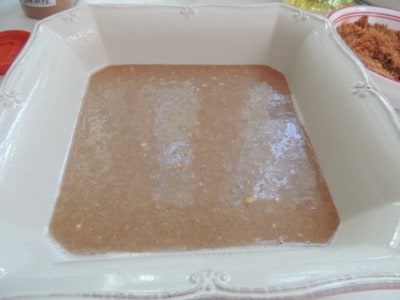 Pour your batter into the greased pan. 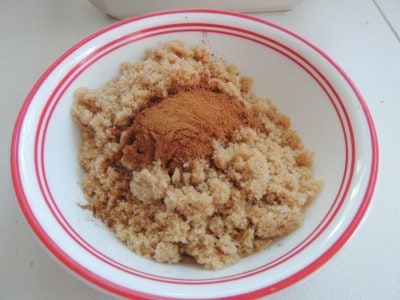 Now mix up your topping by stirring together cinnamon and brown sugar.

So we had an interesting conversation on Facebook yesterday and talking about grocery prices brings it to mind. I posed a hypothetical question:

If you could choose one specific non-meat food item from the grocery store to get free for the rest of your life, what would it be? Only one.

So far there are over 600 responses on Facebook and they are really interesting to read. I’d love to hear your response here by leaving a comment below. I still haven’t made up my mind what I’d do but I’m enjoying thinking on it. This is kinda like how Mama used to daydream about what she’d do for her kids if she ever won the lottery. First up on her list was always paying off our houses :). Second, was sending every family to DisneyWorld. This conversation is even more fun than winning the lottery musings to me though! 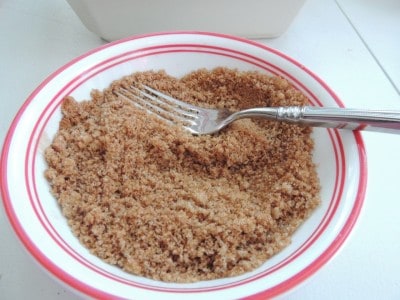 Here is our WONDERFUL light brown sugar stirred up with our cinnamon. 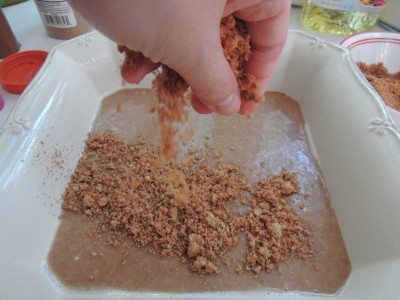 Sprinkle that over the top of your batter. 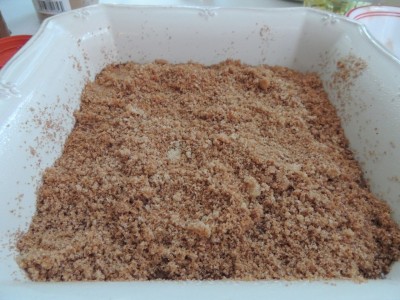 Next is the part that trips people up… 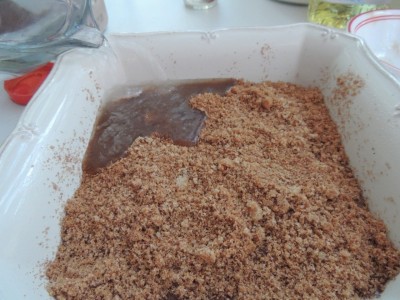 You have to S-L-O-W-L-Y pour hot water over your batter.

The thing is that you don’t want to end up pouring it fast because that will just end up thinning out your batter with the water. What you want in the end is a layer of water floating atop the batter. SO, to accomplish this, I take my hot water and pour it very slowly from a corner of the dish. I kinda let it go down the sides of the dish and then trickle into the pan. This will still unsettle a corner of your batter so I pour from one corner for a bit and then I move to another corner. 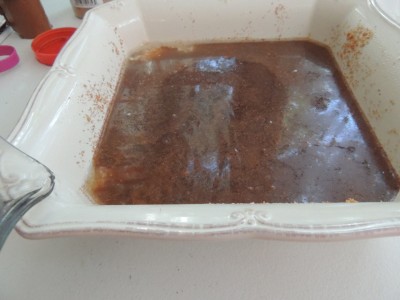 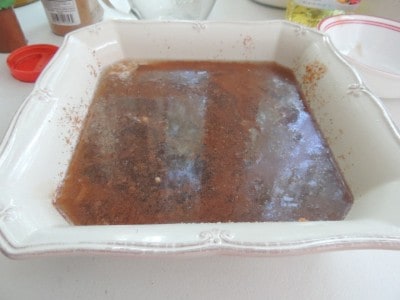 After you’ve poured all of your water in you’ll end up with this. 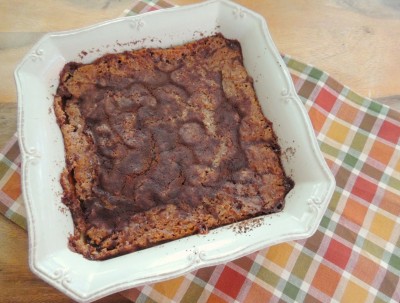 When it is done, it will look like this.

That is a floating layer of cinnamon cake on top and a thick pudding layer on the bottom. 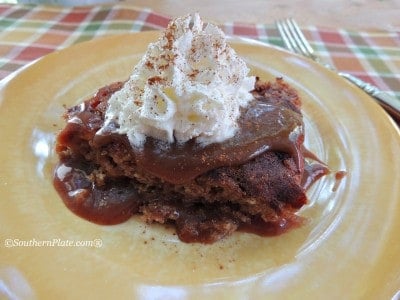 But serve warm because it is divine warm! 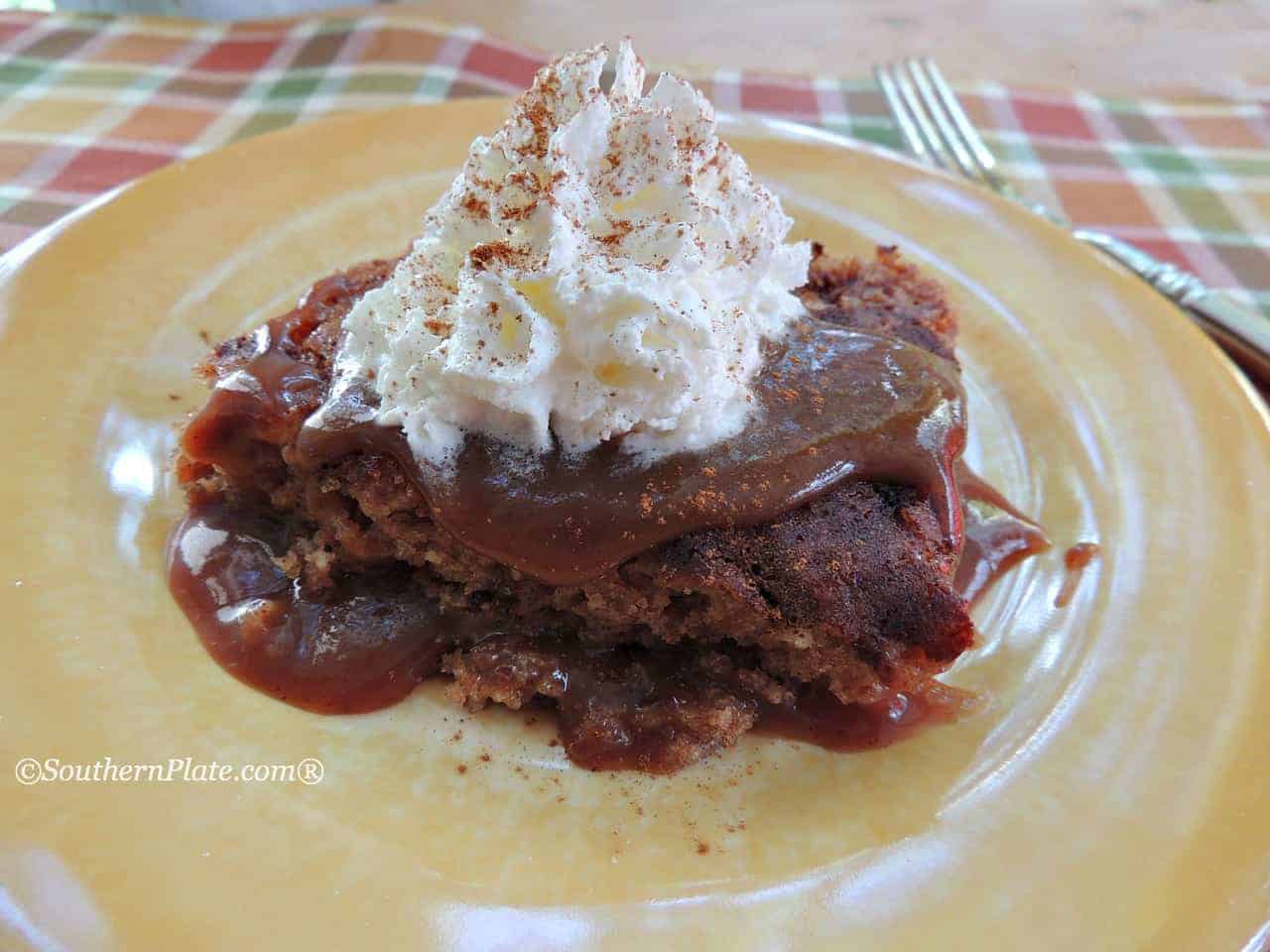 < Previous Post
Watch An American Homestead Right Here!
Next Post >
Southern Plate Radio Show – 3 Backup Plans to Help You Put Supper On The Table No Matter How Crazy Life Gets!