Hey! If you’re new here, welcome! You’re a grand addition to the Southern Plate family. Browse around, put your feet up, and make yourself at home. I enjoy visiting with folks in my posts but if that isn’t your thing (or you’re just too busy today), just scroll to the bottom for the Big Batch Brownies recipe and we hope you’ll come sit a spell when time allows. Have a great day! 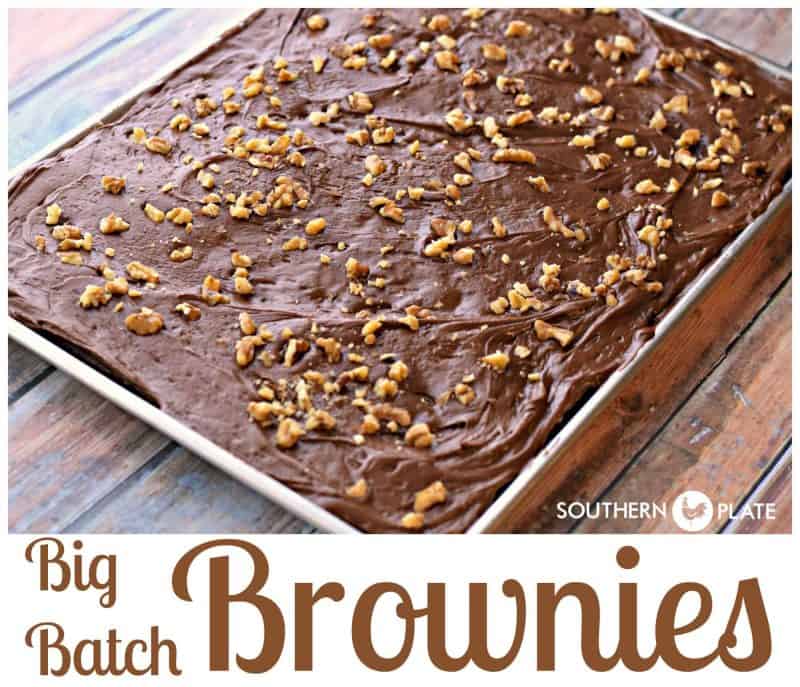 This is the recipe I use when I want to make a big batch of brownies all at once as it makes anywhere from 30-40 servings, good for the average size classroom, workplace, or Sunday School class!

They are fudgey, deeply chocolate, and finished off with a perfect spreading of creamy chocolate frosting. Although I have several brownie recipes in my personal collection, this one is a favorite of both of the men in my house – and if you happen to be sitting near my son at lunch today he has a stash of them on hand to give out to his friends :).

Whip them up in one bowl and then wash that same bowl to make the icing in to lessen the mess. Aside from that you’ll just dirty up a 18×13 baking sheet (this is a standard half sheet size), like this. I buy these in two packs for about $15 at Sam’s club and I have been using them for years – they are the best baking sheets I’ve ever had. 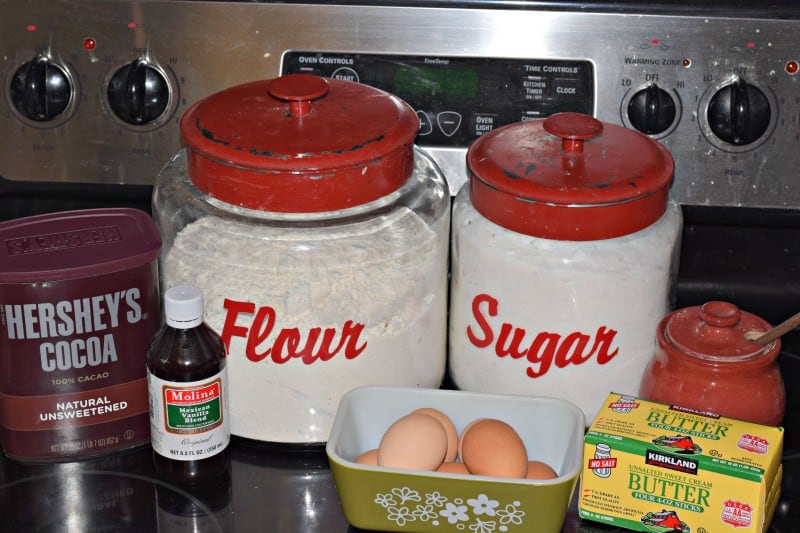 To make these you’re gonna need: All purpose flour, sugar, cocoa powder, salt, vanilla, butter (a lot), eggs (a lot), and a wee bit of milk.

I know the milk isn’t pictured but not every ingredient gets excited when I get up at the crack of dawn to cook something. By the way, I used whole milk. You can use whatever milk or milkish product you happen to have.

I really should be a better food blogger and put my ingredients in a nice little area with good natural lighting but I’m not a good food blogger, I’m just a Mama who happens to have a blog, likes cooking, and wants to make brownies. Taking pictures of things from my pantry feels silly enough without posing them and trying to get their best side :).

P.S. The control area of my oven could use a spray of windex and a wiping down. I would fire the maid but she hasn’t shown up for work in 17 years so I’m slap out of folks to complain to about that.

Folks always ask about my canister set. I made those. I even did a little tutorial on how to make them and I used to sell the words that go on them but like every other time I have ever sold anything, it ended up costing me money to do so. I kinda do this whole business thing backwards, I pay money to sell things rather than make money by selling things :). I have come to realize that I am a lost cause so I just avoid it. However, we are working on the next generation. Katy is doing a unit in homeschool this year where she runs a pet shop entirely on paper. Just last week, we went over how to mark things up to determine the profit you make and then priced everything in her little store (on paper) so that she made money on it. We then went over all of the expenses in running a business and wrote all of the expected and some unexpected ones down. I’m excited about her learning practical life skills in math in addition to her regular math lessons and we’re really enjoying her little pet shop. We may or may not be plotting to become crazy cat ladies together when we both get older…. 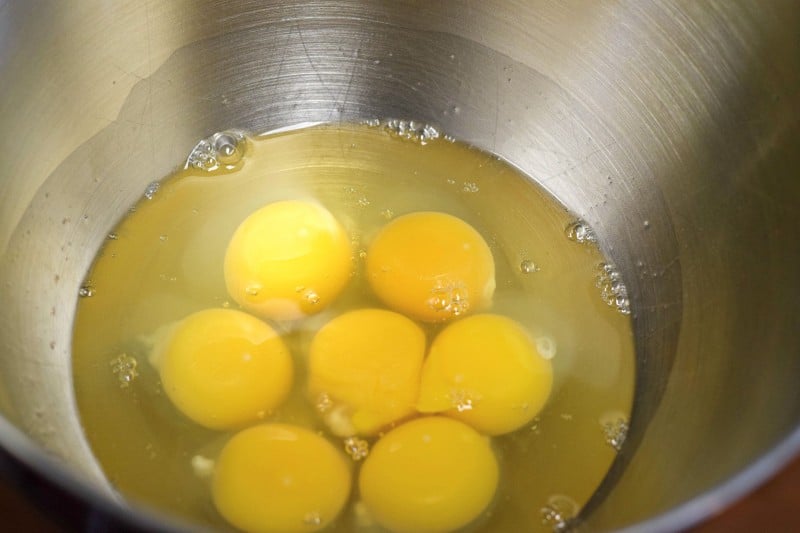 So I’m not going to show you all of the steps because I can easily talk you through it. We’ll just start with the eggs. Yes, there are a lot of eggs but this is going to make a lot of brownies. If you want to make a smaller amount of brownies, you can half this recipe yourself and make it in a 9×13 but I don’t recommend that. Instead, I suggest you just make this recipe according to my instructions and then share the brownies with folks – because we have a severe shortage of people who share brownies in our society

Now, lets get this party started…

Melt your butter however you see fit to melt it and set it aside to cool a bit. Put your eggs in a large mixing bowl. Beat the eggs up with an electric mixer. By the way, if you have a stand mixer this batter will just fit in that bowl so go for it. I’m using my Hamilton Beach stand mixer.

Add in sugar, cocoa powder, salt, and vanilla. Beat for about a minute or until it’s good and blended…. 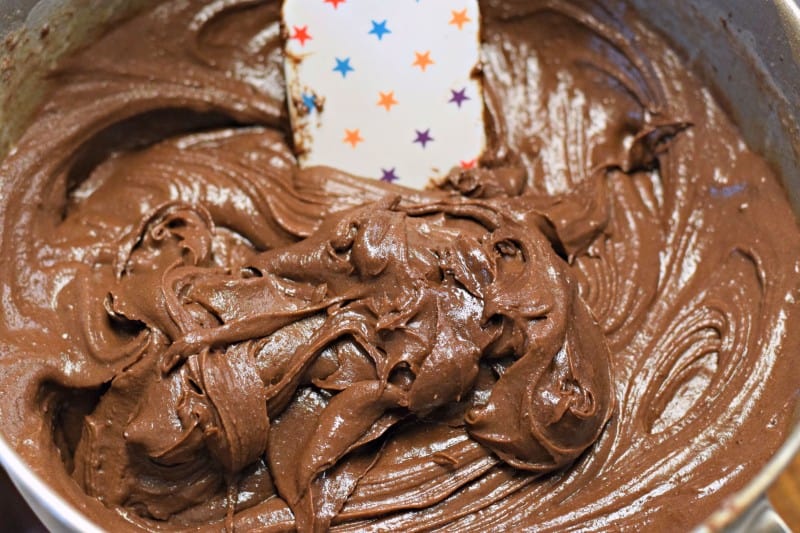 Add flour, butter, and milk and beat again until well combined and a good brownie batter is formed, scraping down the sides as needed during the mixing process. 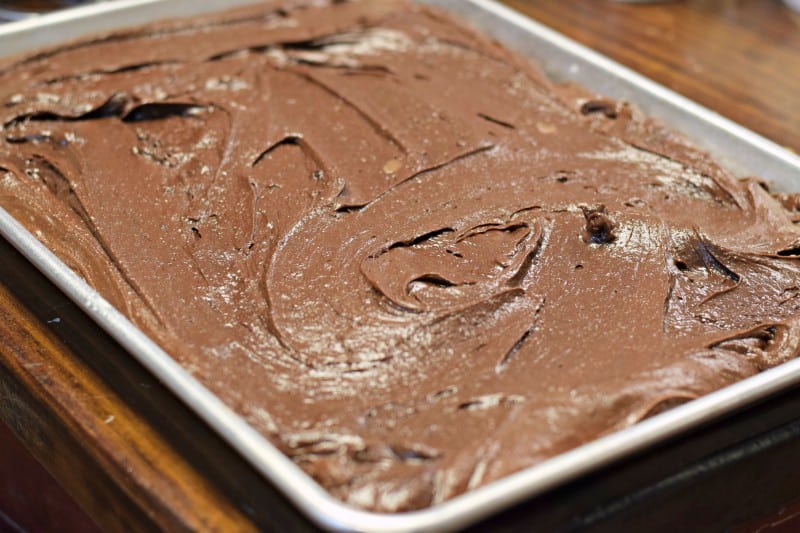 Spread into a greased 18 x 13 half sheet pan (I just spray it with nonstick cooking spray) and bake at 350 for about 25 minutes. Make sure the middle is set and done before you remove it from the oven. I know this doesn’t seem like a lot of time but your batter is kinda thin here and spread out over a large area. 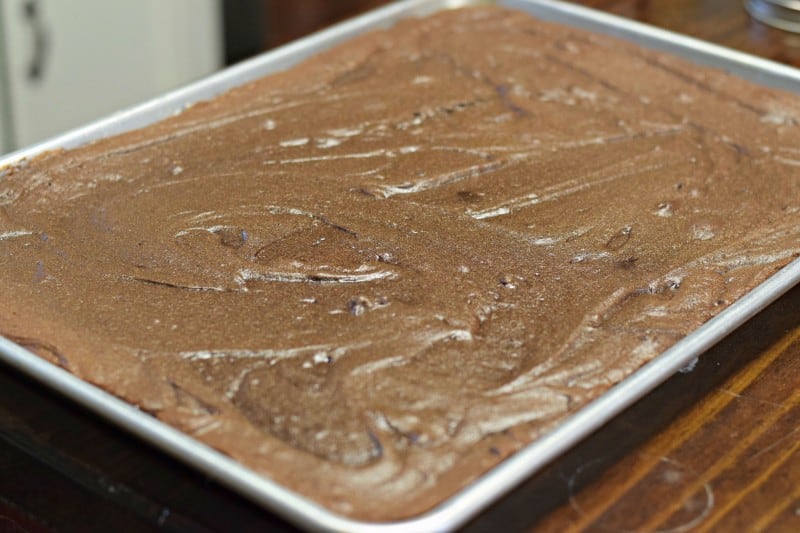 This is my cooked brownies. Hi brownies!!! (y’all wave at my brownies)

Now clean out that mixing bowl and make up your icing (I can’t believe you didn’t wash it while the brownies were baking. Okay, totally believe that. Batter bowls have gone for days in my house without being washed. It gives my sink purpose though so I don’t fret. Never a bad thing to give something purpose, right?). For the icing, just put everything in the bowl and beat the heck out of it with an electric mixer until it is smooth and creamy. Y’all have seen me beat the heck out of things before so I’ll spare you the pictures. 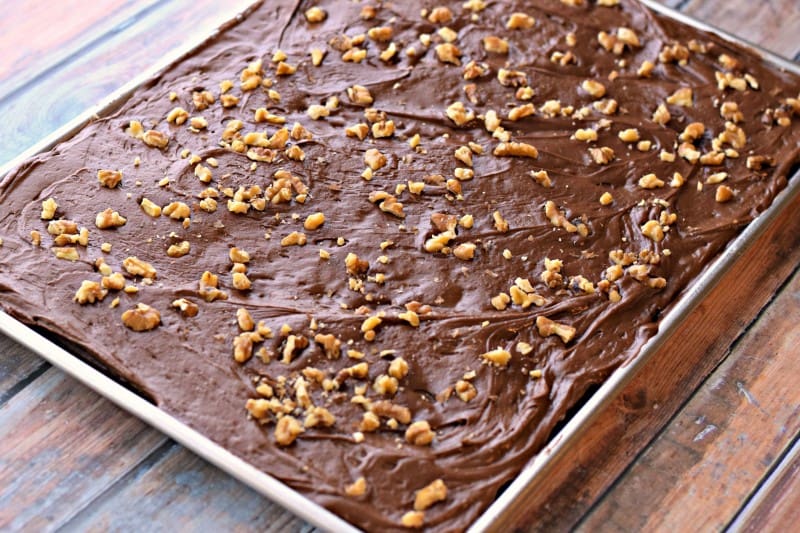 Let your brownies cool a bit and then spread the icing on them. Sprinkle with nuts immediately after icing, if desired. I usually don’t use nuts because they are outrageously expensive and it seems 9 out of 10 kids are allergic to them these days, but today got the better of me and I just *NEEDED* walnuts on top of a brownie. I gave in to my desires. Back to that fallen world thing, I am a fallen creature. But I feel better now so can we move on from this instead of focusing on my failures, mmmkay?

Here, have a brownie. 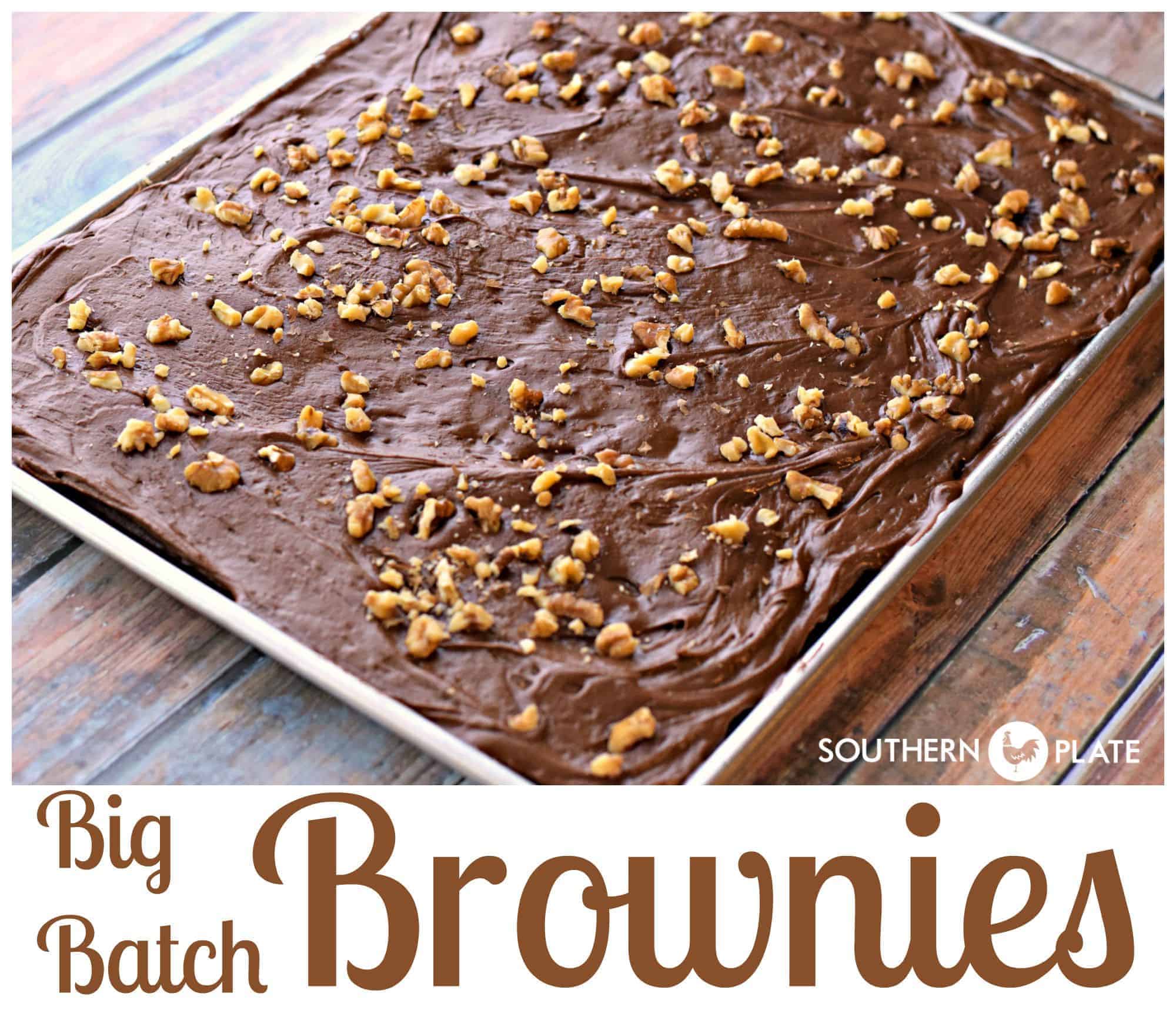 Notes about this recipe:

The world would be a better place if more people made brownies and shared them with others.  ~Christy