These cinnamon-spiced crockpot baked apples are such a versatile and easy recipe to make this fall. 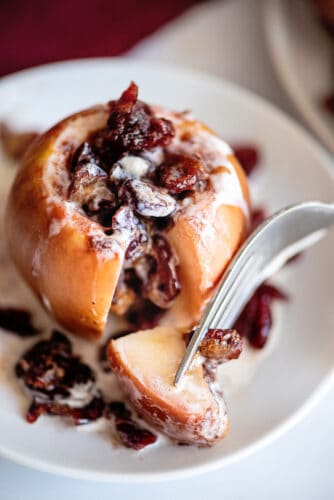 Baked apples have been a favored Southern fall treat for generations. But thankfully, these days we can cook them in the slow cooker, which makes life so much easier. This is a simple traditional recipe for old-fashioned crockpot baked apples, which are prepared as they did in the old days. Yep, all you have to do is core your apples, stuff it with some good stuff, and bake away! But now the bonus is that you can do it in the morning and come home to that same smell my Grandmama walked into all those years ago.

When made to the recipe, you’ll enjoy some tender, juicy, and flavorful cinnamon-spiced baked apples at the end. But I’ve included lots of ideas to personalize it and make it your own and I want to hear your ideas in the comments on this post, too! Serve your baked apples with a scoop of vanilla ice cream, with oatmeal for breakfast, or over pancakes. I told you it was a versatile recipe! 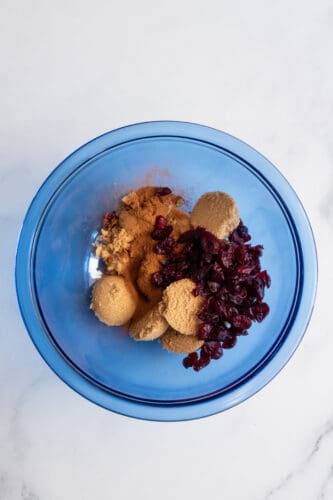 Place your brown sugar, dried cranberries or raisins, and cinnamon and allspice (or whatever spices you are using) in a small bowl and stir them up really well.

Usually, when I cook with raisins or dried cranberries I like to soak them in really hot water for a few minutes to plump them up a bit before adding them to the recipe. However, these will be slow cooking with plenty of steam in there so there isn’t any need to do that here. 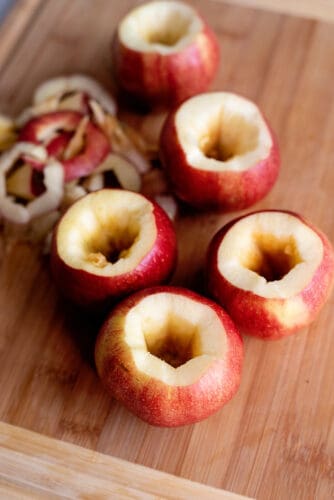 I bought one of those apple corer thingie-ma-bobbers. It is about the size of a vegetable peeler and it sure is neat!

After you core your apples peel off just a little strip around the top. 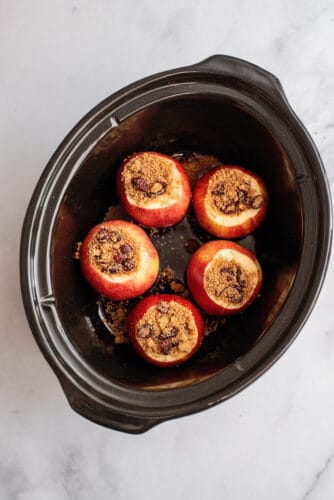 Now place the cored apples in the bottom of your slow cooker and use a spoon to fill each apple with your sugar mixture.

Push the filling down in there and fill it up some more! 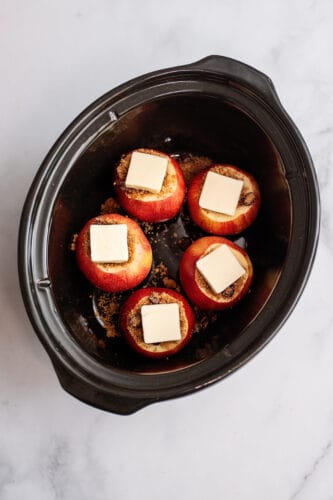 Top each one with a pat of butter. You can also cut the butter into your sugar mixture but this works just as well and is less work. 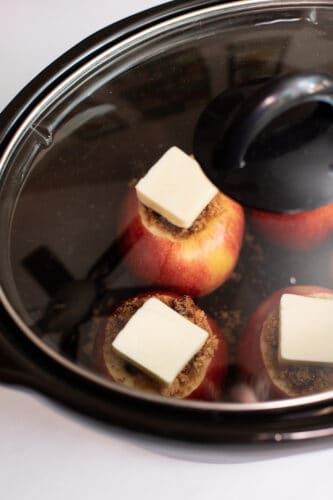 Add in 1/2 cup of water and cover with lid. Cook on low for 6 to 8 hours or on high for 3 to 4 hours for large apples. I used five small to medium apples, so I cooked mine on high for 2.5 hours, or until tender.

I recommend checking them after 3 to 4 hours on low and after 1 hour on high. 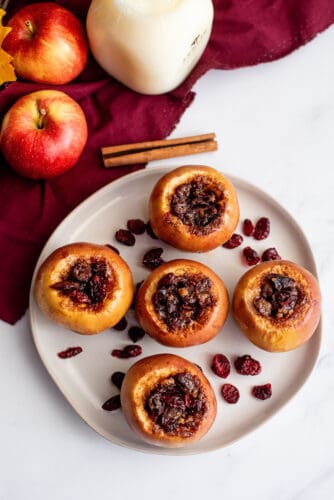 Your baked apples should look like this once done. 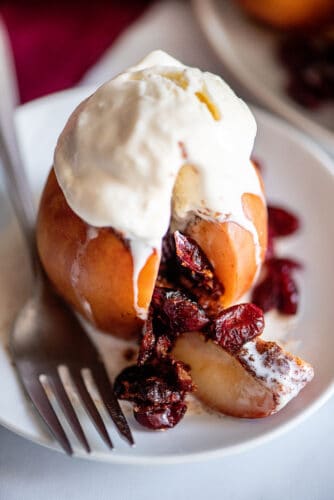 Add ice cream or whipped cream if you like because you know what? Everything is better with a little ice cream!

Remember to add nuts, oats, spices you like, and anything else to really make this recipe your own! 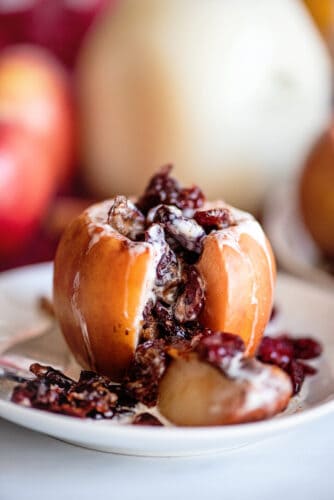 What apples should you use?

You can use a variety of apples for this slow cooker baked apples recipe. Granny Smith apples are good because they’re both firm and tart. Another option is Braeburn. Just remember, the softer the apple, the less cooking time you’ll need. So ensure you keep an eye on your apples if you choose a softer apple variety.

Is this recipe for baked apples gluten-free?

Yes, this is a gluten-free and dairy-free baked apple recipe.

How do I serve my crockpot baked apples?

You can serve your baked apples in a multitude of ways. Keep it simple with a scoop of vanilla ice cream and a drizzle of salted caramel sauce for dessert. Alternatively, serve them for breakfast with granola, yogurt, oatmeal, pancakes, or waffles (don’t forget the maple syrup). Another option is to make them in a pastry for a delicious dessert. 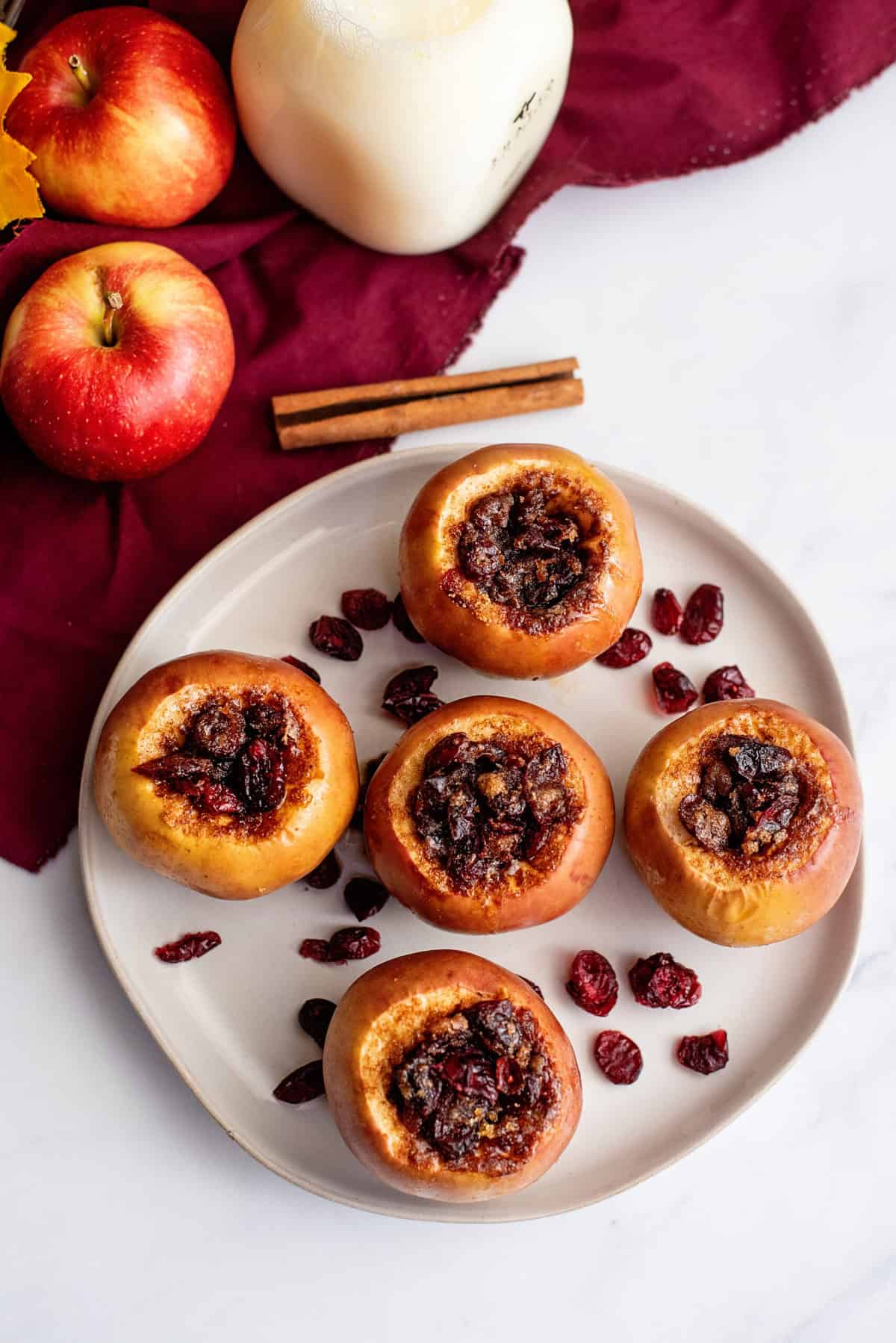 For Each Apple you'll need:

To bake in the oven: follow the same recipe, but place the apples in the baking dish instead (8x8 or 9x13) and pour water in just as before. Bake at 350 for 30-45 minutes, or until tender.

“When bobbing for apples, an idealist endlessly reaches for the best apple, a pessimist settles for the first one within reach, while an optimist drains the barrel, fishes out all the apples and makes pie.”

Be an email subscriber and you will get all the new recipes first!

Love these made before. Yes the vanilla ice cream puppet over the top.

So glad you loved them!!

I just tried this today with green Granny Smith apples and they collapsed/exploded after about 90 minutes on high in the crock pot. Trying to figure out what to do with them so not to waste. Not sure what went wrong.

Without being there it is hard for me to say for sure what happened but I would guess that the apples were smaller than the ones I use. Next time I would do 1-2 hours on high and check after an hour. I have adjusted the recipe for those using smaller apples will check them sooner. Thanks for your comment.

Can I use splenda instead of brown sugar?

I love these, to come home and smell them cooking is great. Thanks for this post.

I agree Mary, one of my favorite smells!!

So disappointed in how mine turned out. I used a 4 qt slow cooker, I could only fit 3 apples in it, put it on high and needed to go out, came back and they were cooked to mush at 4 hrs, 15 minutes on high, I pretty much have applesauce, used Jonagold apples….. Next time I’ll try the oven

So, what is the best apple to use that will not get mushy?

Different areas have different apples available, but in saying that I would choose a firm apple. Not a red or yellow delicious, but one that states it is good for cooking. Ask your produce manager what is a good one in your area that is firm and good for cooking.

Cristy – I just want to say I love you and your wonderful recipes! I love the down home, family values that you’re always sharing, and reminding us of. I made these today and they were absolutely delightful. The house smelled so amazing while they cooked too. I cut back a little on the sugar amount, and drizzled with some agave nectar before cooking. Such a simple wonderful treat that made me feel so comforted.
I love that you pass out OCC boxes to the children. I have a real heart for that ministry and ‘took’ to you the first time I saw you in one of their videos. Thanks for letting Jesus shine through you to all of us. You are a special blessing!

The SouthernPlate Staff
Author
Reply to  The Better Baker

Oh my goodness, thank you so much! You are such a blessing to me!! I am glad you enjoyed the apples!!