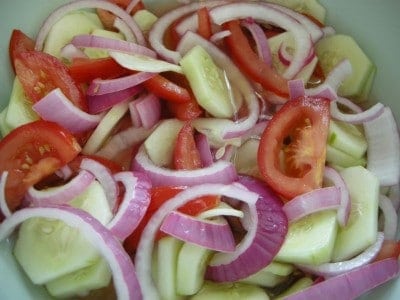 This is a staple at barbecues, family gatherings, and reunions. During our Southern Summers, we love the juicy and refreshing experience of eating this salad! Although I had seen it plenty as a child, the first time I actually tasted fire and ice salad was when I was pregnant with my daughter. My husband’s company hosted family night at the U.S. Space and Rocket Center, renting the entire Museum out for the night and having a catered banquet.

Now most of y’all probably think the Space museum is a pretty neat place. After all, it is home to the first Space Camp (a great deal of the 80’s movie by that name was filmed there), it is a part of our Marshall Space Flight Center and hosts the IMax along with countless priceless artifacts and memorabilia.

I thought it was pretty cool, too, the first fifty or so times I went there. You see, when you are born and raised in Huntsville, Alabama, you tend to have an awful lot of family and school field trips to the U.S. Space and Rocket Center (Two of my grandfather’s even built rocket engines). As a little girl, my enthusiasm remained so long as Miss Baker was there. Amidst all of the rockets and space suits which I knew little about and understood even less, it was still a thrill to get to see a space monkey eat a banana.

But Miss Baker passed away in 1984 and 14 years (and many more field trips) later I married someone whose childhood dream had been to visit the U.S. Space And Rocket Center. ~sighs~. We got annual passes. We went, and went, we did the tour, we walked around the museum. We had a son – who loved to visit the U.S. Space And Rocket Center. We renewed our membership. We visited. We walked, we watched, we participated, we rode, we ate, we oohed, we ahhed, we photographed.

So now I’m standing here at this banquet sponsored by my husband’s company in a museum filled with people just bursting with zeal over seeing an astronaut’s space suit that probably knew my face as well as I knew it, and I spied what amounted to a vat of Fire and Ice Salad on the buffet. Being several months pregnant, NOW I had something to get excited about.

Katy says babies sit in their Mama’s tummies and wait on her to drop food down so that they can catch it. If her theory were true, she would have been covered in tomatoes, cucumbers, and onions on that day! I don’t know how much I ate, but the next day I came home and wouldn’t you know it, I made me some more and ate that too! 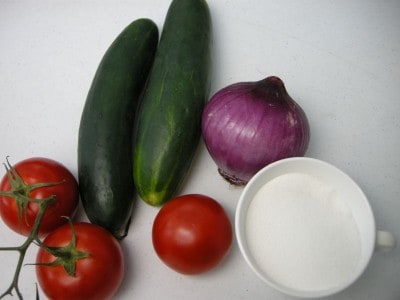 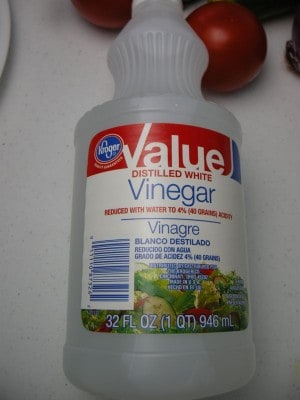 You know, speaking of drinks that come with umbrellas, people talking openly of alcohol is really strange to me. I don’t know if I’ll ever get used to it. Up until a few years ago, I had lived in towns that weren’t even allowed to sell alcohol, “dry counties” is what they were called. Ordinances like this are prevalent in the old south, where are cultural roots are held deeply in the Baptist traditions. When I was in Los Angeles, I went in a drug store and they had an entire cooler of alcoholic drinks! I was really surprised to see that.

It’s amazing when the old gal gets out of the house, huh? 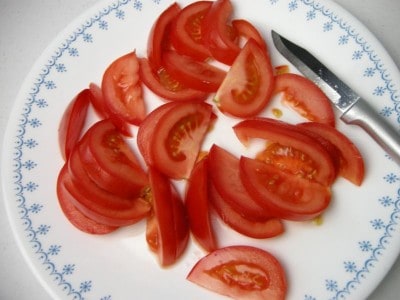 Cut up your tomatoes.

You can cut them in chunks, slices, or dice them. I’m doing little thin slices because it’s pretty that way. 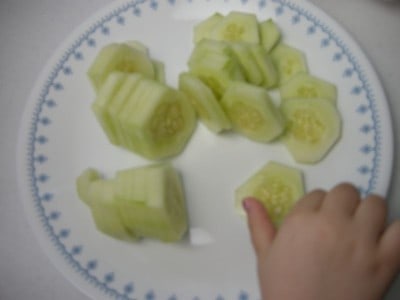 Allow cute little dimpled hands to steal a few slices even if it does make your picture blurry.

Cucumbers are for stealing. I wholeheartedly encourage it. 🙂 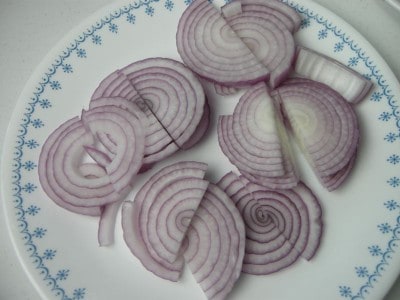 Cut up your onion.

I slice mine and then cut the slices in half, still leaving pretty big pieces.

This way, those of you who don’t care for the raw onions can pick them out easily enough.

By “those of you”, I really mean my mother.

See, Mama? There is a point to my onions being big sometimes. Now you don’t have to eat them. 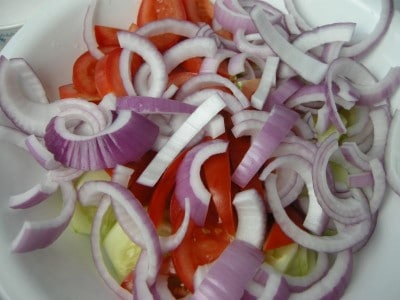 Dump all of that into a bowl. 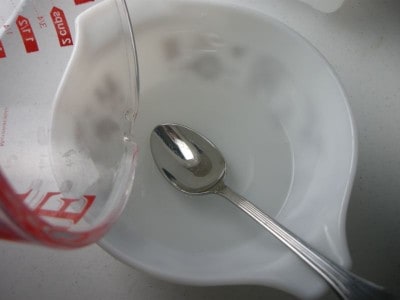 Now we have to make our dressing.

For this all we are going to do is combine equal parts water, vinegar, and sugar and stir it up.

I start with 1/2 cup of each but you can do more if you like. I wouldn’t do any less though. 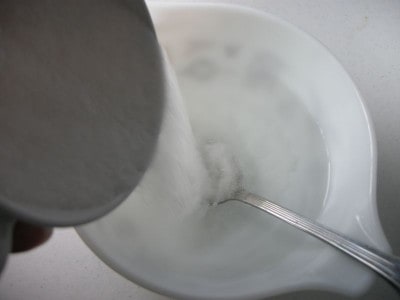 This is me adding my sugar to the vinegar and water mixture. 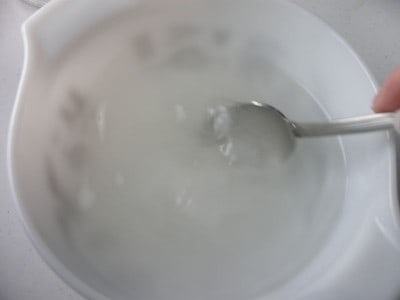 Don’t worry if your sugar isn’t dissolved all of the way because we’re going to let all of this marinate in the fridge for a spell before we eat. 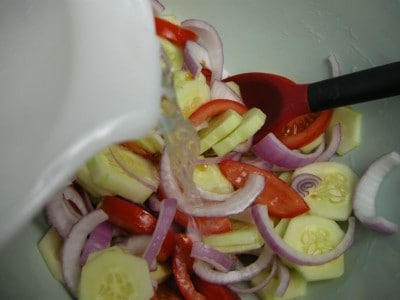 Pour this over your veggies and stir. 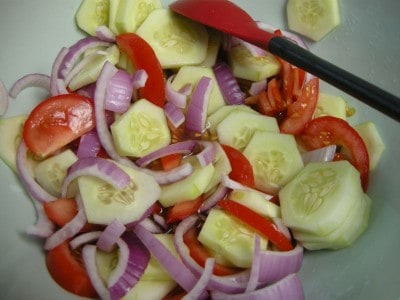 Cover and place in the refrigerator for a few hours before serving.

It will make more juice but I like to go give it a good stir after an hour or so.

Save some for me!

Oh and if you’re ever in Huntsville and decide to go to the Space And Rocket Center, give me a holler. My family and I will probably be there, too! 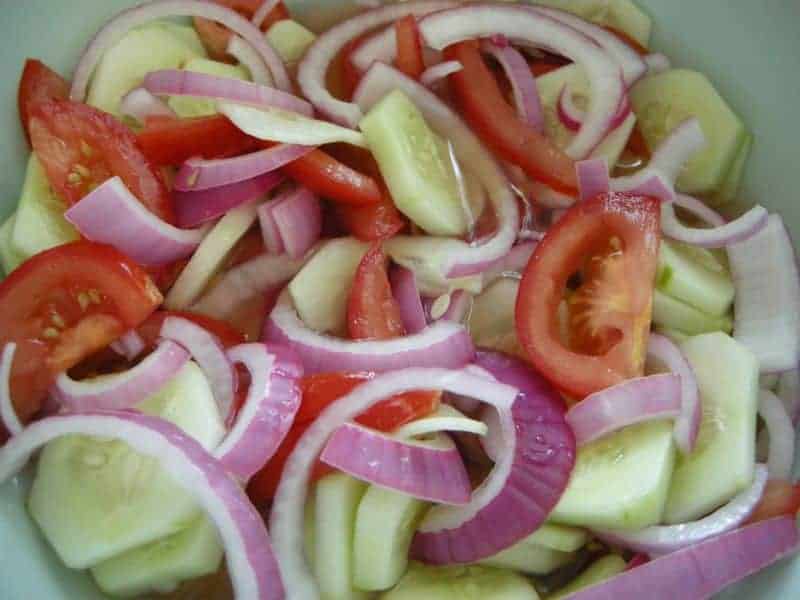