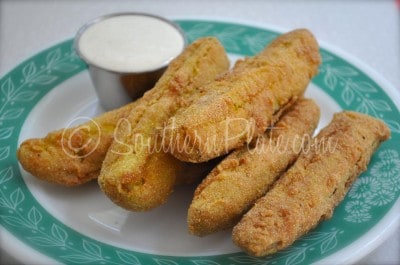 Recently, we went to the Soulstock music festival in Decatur, Alabama with friends. It was hot hot hot. We passed the time by eating our weight in snow cones for a while, but then I got to wanting something a little more substantial and headed on over to the fried Dill Pickle Tent. Hey, it was a music festival. It’s not like they had a Grilled-Chicken-Wrapped-In-Lettuce tent – not that I would have gone there if they did but still… 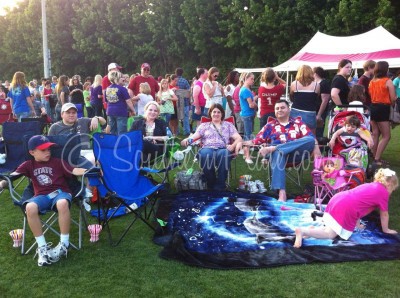 The Fried Dill pickles went over very well with our group and even ended up in another repeat performance. I had fun sitting next to a friend of mine who is expecting and not from around these parts. She’s from up north a ways and I said “You do realize that you are now barefoot, pregnant, and sitting in a field in Alabama eating fried pickles?”

So here is how I make them. I don’t care for the sliced ones that much because they seem to have more of a twang to them plus they’re an awful lot more work. These are just plain good in my mind so let me show you how easy they are to whip up! 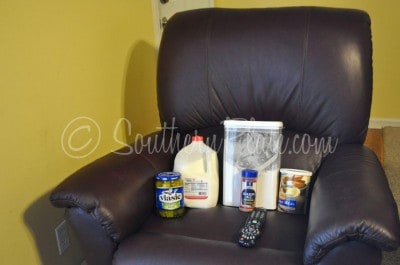 You can make do with salt and pepper if you don’t have seasoned salt and whatever flour you grab first will be fine.

My “recipe” calls for all purpose but I grabbed Self Rising first so that is what I’m using in this tutorial. It makes no difference.

This is another ingredient picture in my quest to appease the ingredients by not constantly taking the same old boring photo of them sitting on the table.

Have you ever wanted to see my Southern Plate Office?

In my living room.

This is a NEW office though because I just got this NEW chair soooo consider yourself a veteran of the official Southern Plate unveiling of the office tour.

You should feel all elite and such now so don’t forget to hold your pinky up when you drink your iced tea later. Or Diet Dr Pepper, or the pickles juice we’re fixin’ to drain, or whatever you drink. 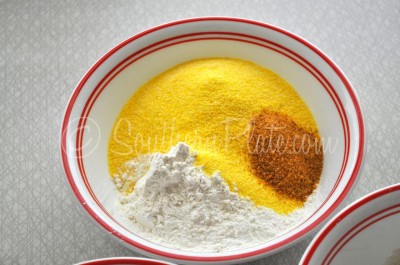 Place corn meal, some of the flour (see recipe), and seasoned salt in a bowl and then stir it up really well. 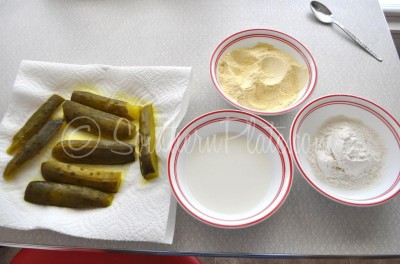 Drain your pickles and then lay them out on a paper towel lined plate to absorb excess pickle juice. 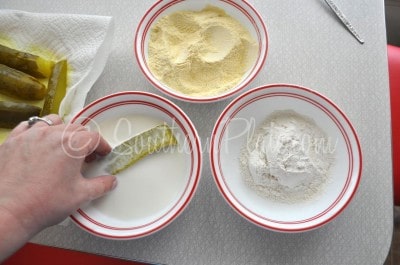 Dip pickle into milk, then dip into flour and then…

If you don’t know who Leslie Gore is take a moment to go google her and listen to a few of her songs so that next time I tell you to sing Leslie Gore you are able to follow my instructions.

I suggest “Sunshine Lollipops and Rainbows” and “It’s My Party”. The first one because if you know all of the words and can sing it really fast it will impress people at parties – and/or someday annoy your children. The second one because that is the only Leslie Gore song the general public knows so when they ask you who sang the first one you can say “You know, the girl that sang…” and then you burst into “It’s My Party.”

Oh goodness, now I have to play one of her songs for you just in case you don’t look….

Watch this and enjoy the good old days when folks like me could do something that was considered by the general public to be dancing, then we’ll get back to the pickles.

Feel better now? Well ya should! 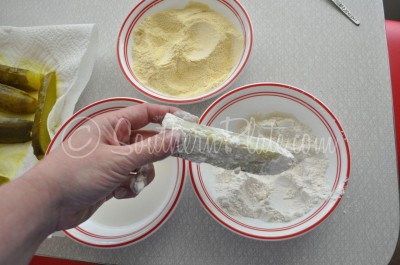 After you’ve dipped the pickle in milk and then flour, dip it in milk again. 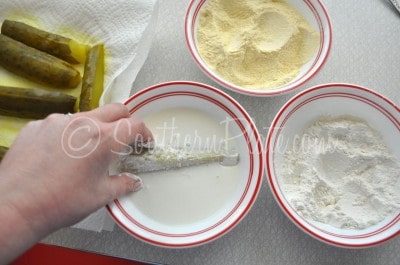 This is an important step because what you’re doing is basically making a sort of glue that will help adhere more of the cornbread mixture to the pickle. I’ve made these before without this extra milk and flour dip and you end up with significantly less breading on your final pickles.

This is also a great trick to use when making fried green tomatoes or pretty much any other breaded fried item. 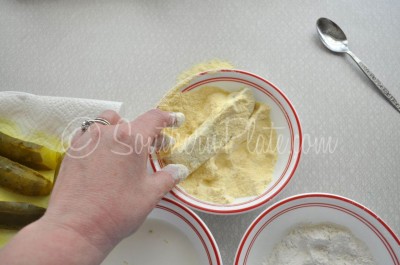 Now dip into the cornmeal and turn to coat all sides. 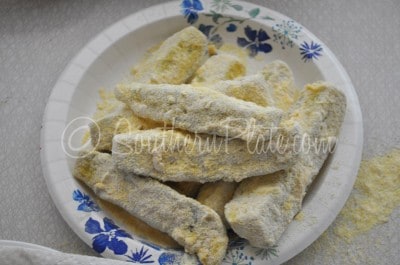 Repeat until all of them are done. Handle them carefully so you don’t knock any breading off. 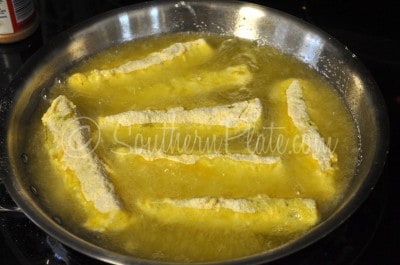 Unless you have enough oil to cover them, which I did not. If that is the case you won’t need to turn them. 🙂 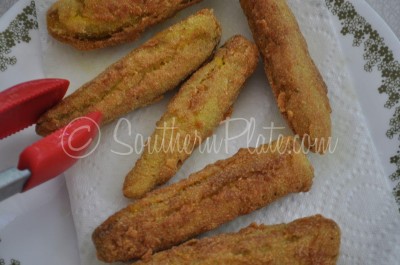 Once they get as brown as you want them (which will likely take about 5-10 minutes) remove to paper towel lined plate.

I realize 5-10 minutes is kind of a big window here but it depends on how hot your oil is when you put them in and how brown you want them – and whether or not you get busy with other things and forget them for a few minutes.

Serve with ranch dressing to dip them in.

Even if you are like me and don’t really care for ranch dressing, it’s good on these puppies! 🙂 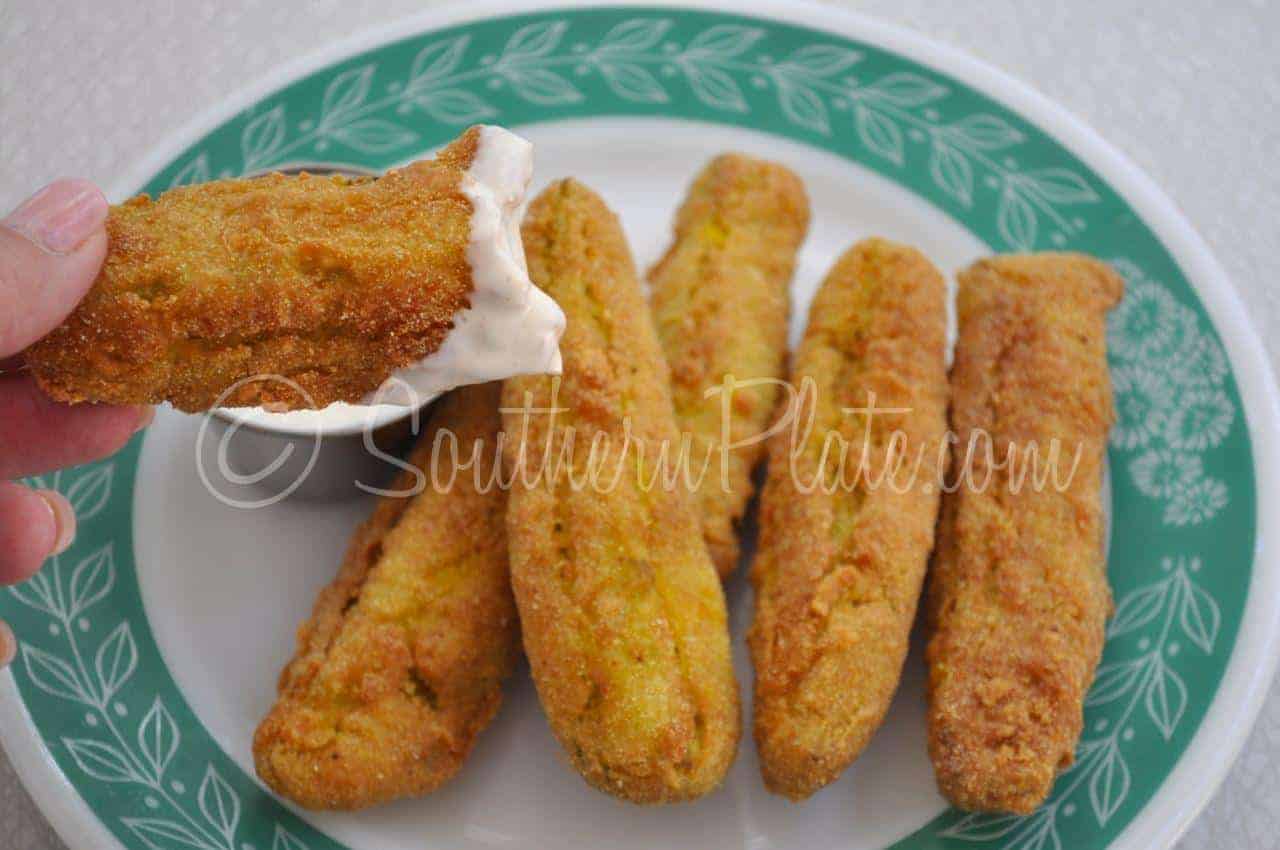 Print
Ingredients
Instructions
These are extremely hot inside for several minutes after cooking.
Makes about 8
You can also do this with dill pickle chips *
3.5.3251

Humans think they are smarter than dolphins because we build cars and buildings and start wars, etc., and all that dolphins do is swim in the water, eat fish and play around. Dolphins believe that they are smarter for exactly the same reasons.

DO YOU HAVE A FAVORITE FESTIVAL FOOD?

TELL ME ABOUT IT IN THE COMMENTS BELOW!

FRIED TWINKIES? FUNNEL CAKES? SHARE YOUR MEMORIES WITH US 🙂