This hush puppies recipe makes one of my favorite Southern side dishes. Bite into the crunchy cornmeal coating and you’re greeted with the most fluffy and flavorful inside, studded with sweet corn kernels and chopped green onion. 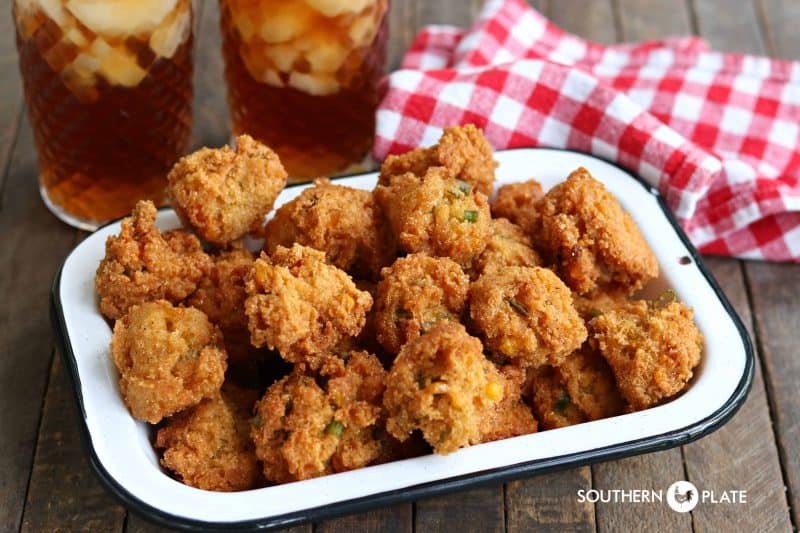 Hey friends! Today I’m bringing you a delicious Southern-style hush puppies recipe that can easily make a meal in and of itself. But of course, you can serve it as a side dish alongside other Southern favorites, like my dutch oven smokehouse chicken and coleslaw. However, come to think of it, I don’t know of any Southerner who hasn’t been to a good bbq restaurant, had a basket of hush puppies put in front of them, and chowed down until they were about to burst at the seams. And that’s even before their actual meal even made it to the table.

So, what is a hush puppy? It’s a small, savory, deep-fried crunchy ball made with cornbread batter. Tender and fried until golden brown, they’re made even more delicious with the addition of corn and chopped green onion. Better still, you don’t even need an egg to make this recipe! Yep, I keep things nice and simple around here when it comes to my Southern hush puppies. Fortunately, you’ll have a batch of these crunchy, fluffy, flavorful morsels to dig into in just 20 minutes.

What are hush puppies?

Now it has been a big ole long rabbit hole that I stumbled into when I started looking for the origin of hush puppies. But it seems that the most accurate story lies in the history of South Carolina. Some say that they were first called red horse bread in the early 1900s but then mysteriously flipped the name to hush puppies in the 1930s. But all the other stories surrounding its origin were doing my head in if you want to know more here is a good summary of the hush puppy history. 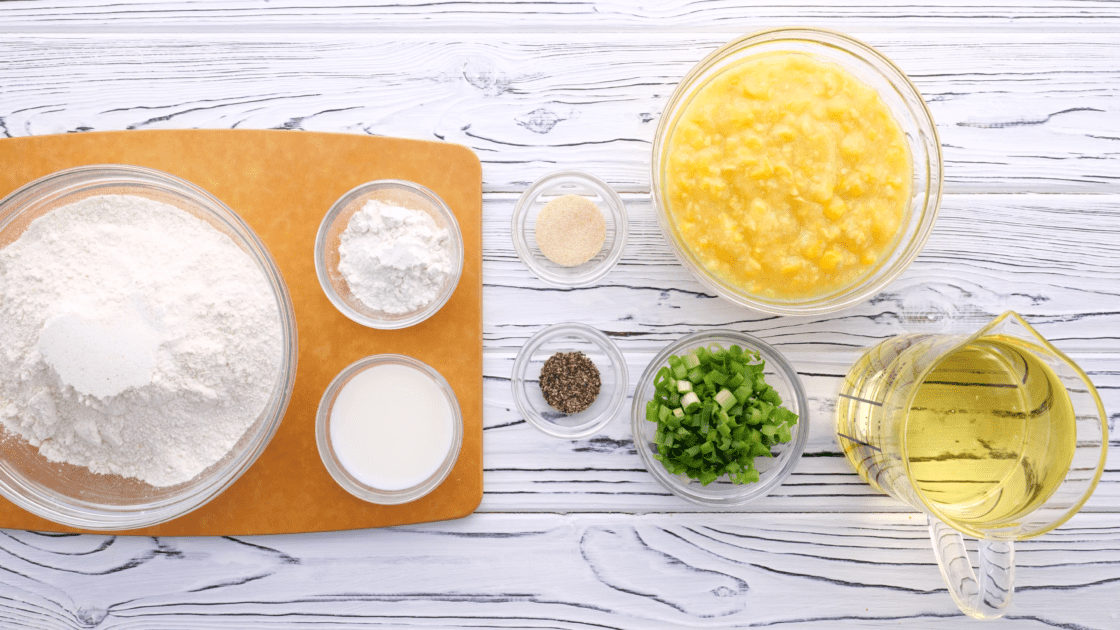 How to Make Southern-Style Hush Puppies 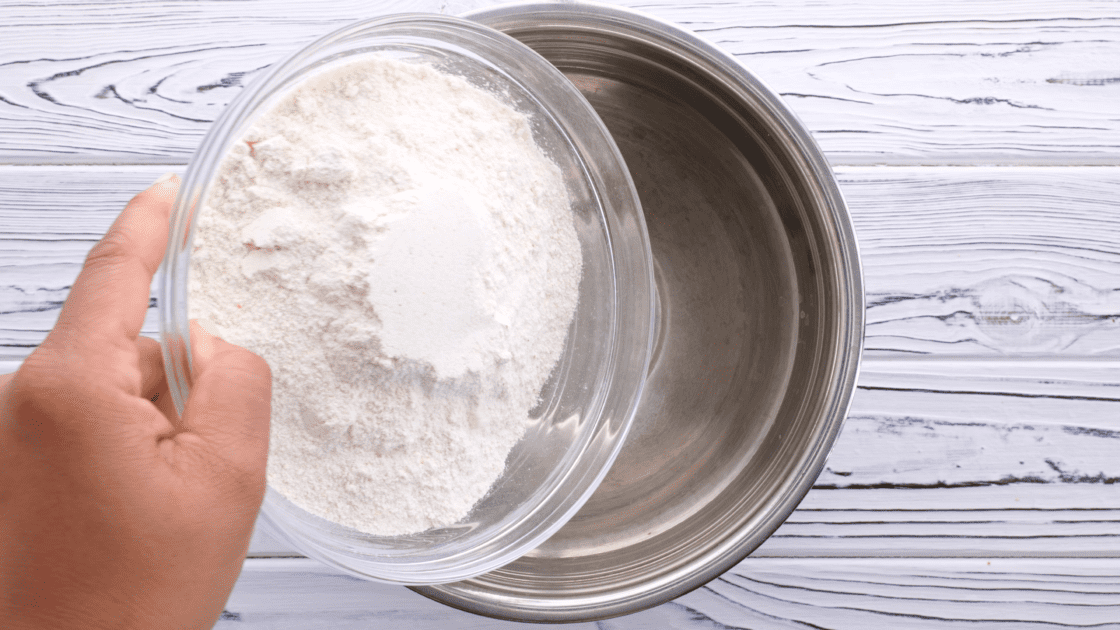 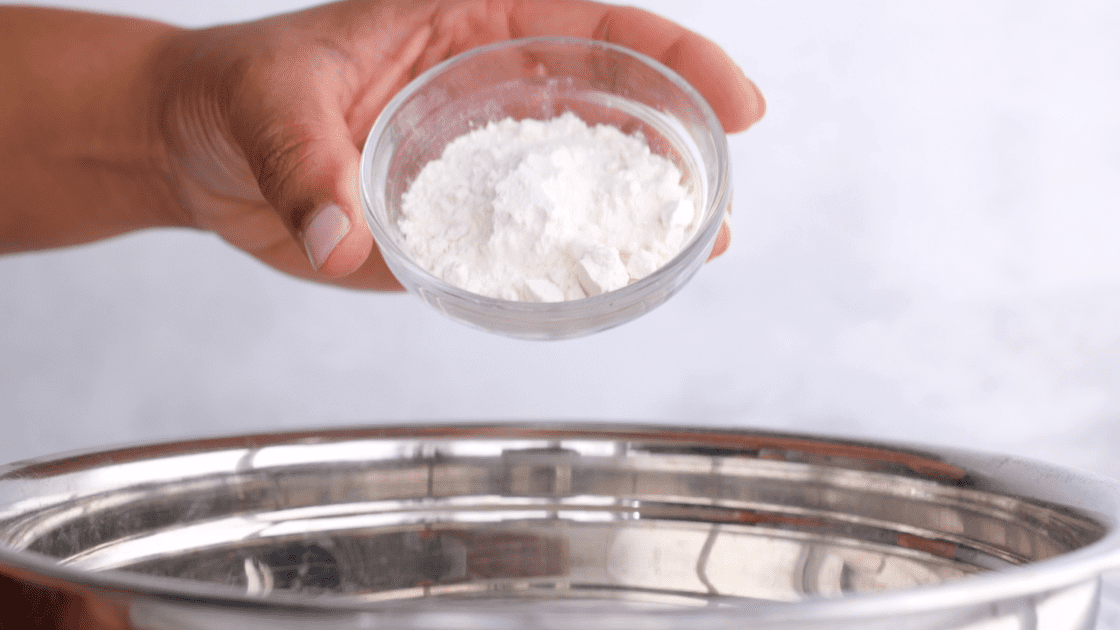 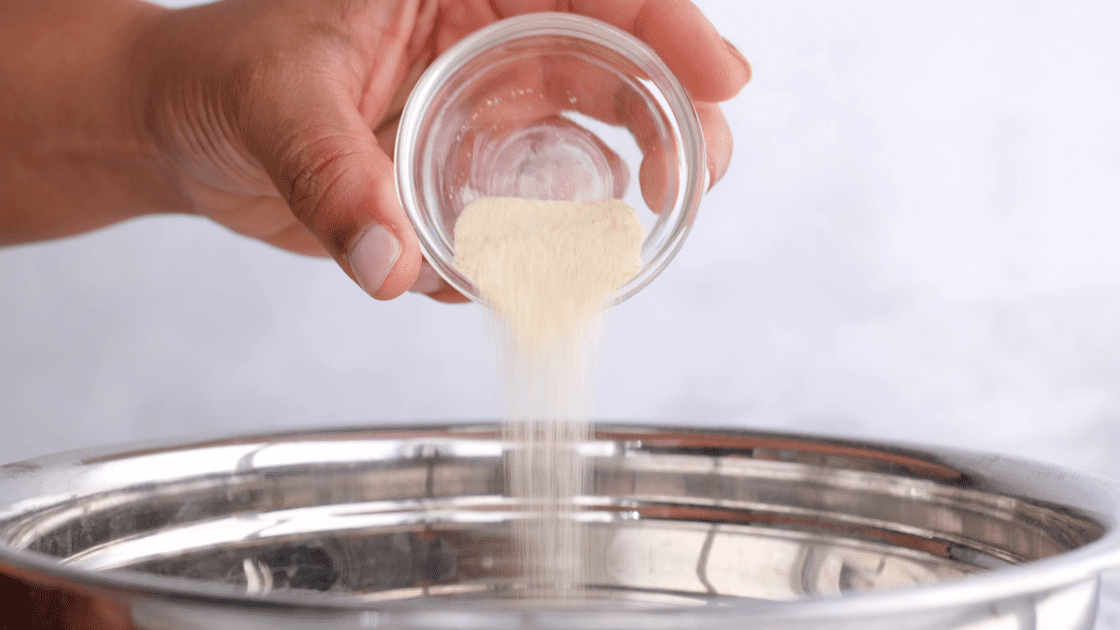 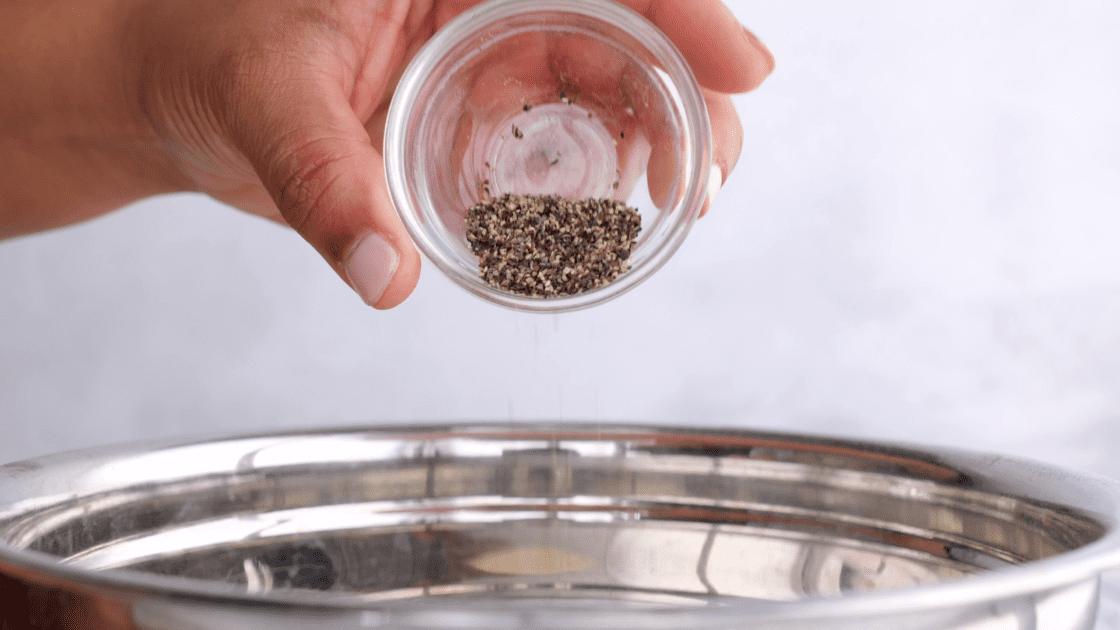 And black pepper in a medium bowl. 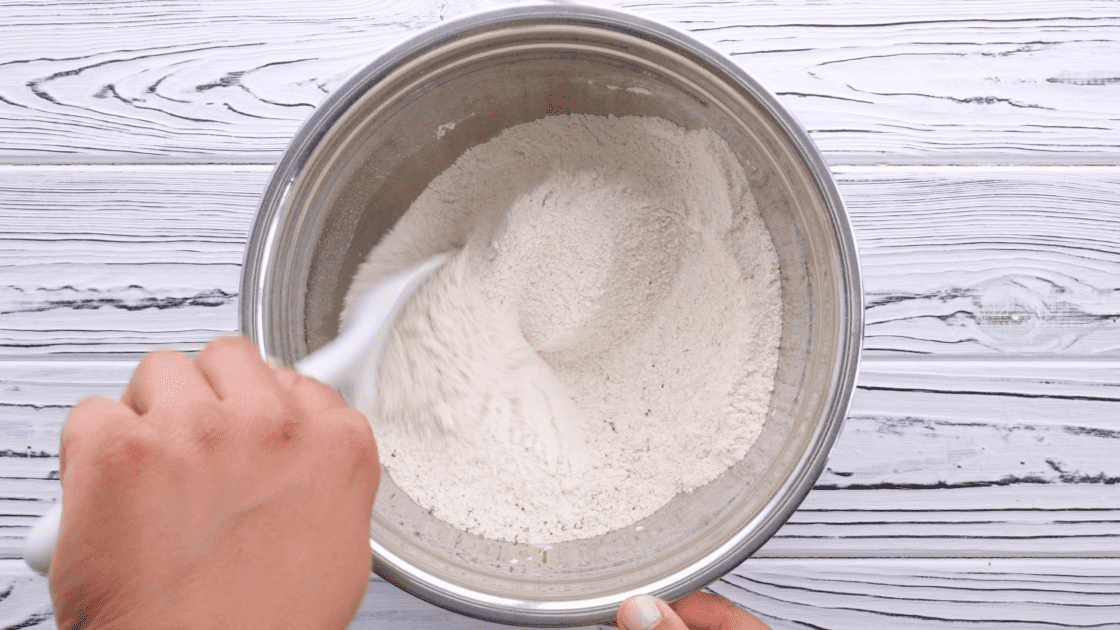 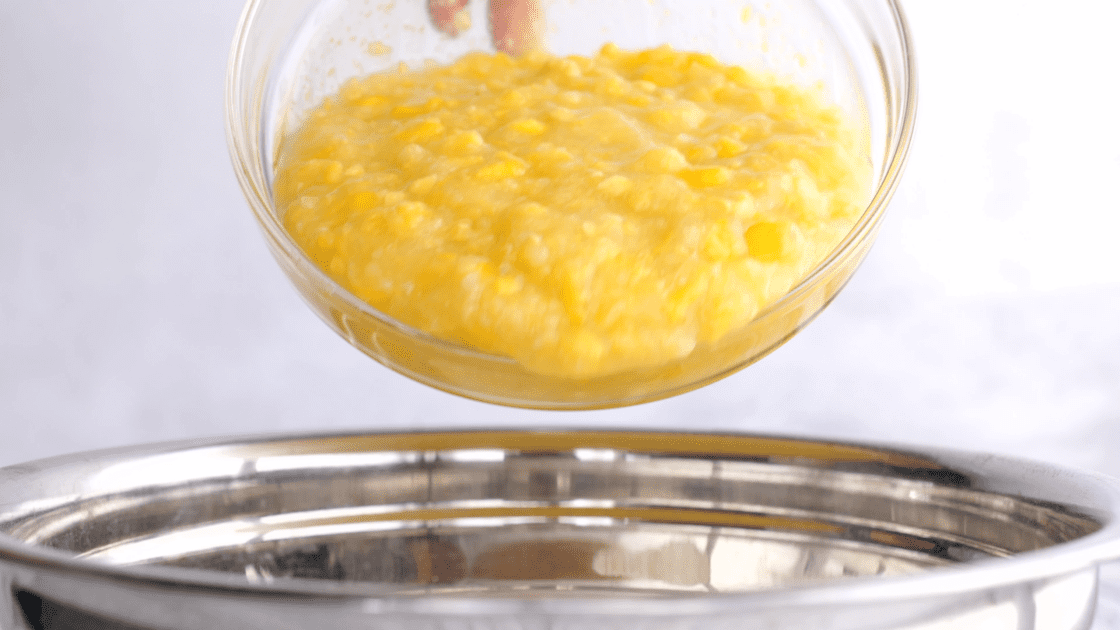 Next, add the entire can of corn… 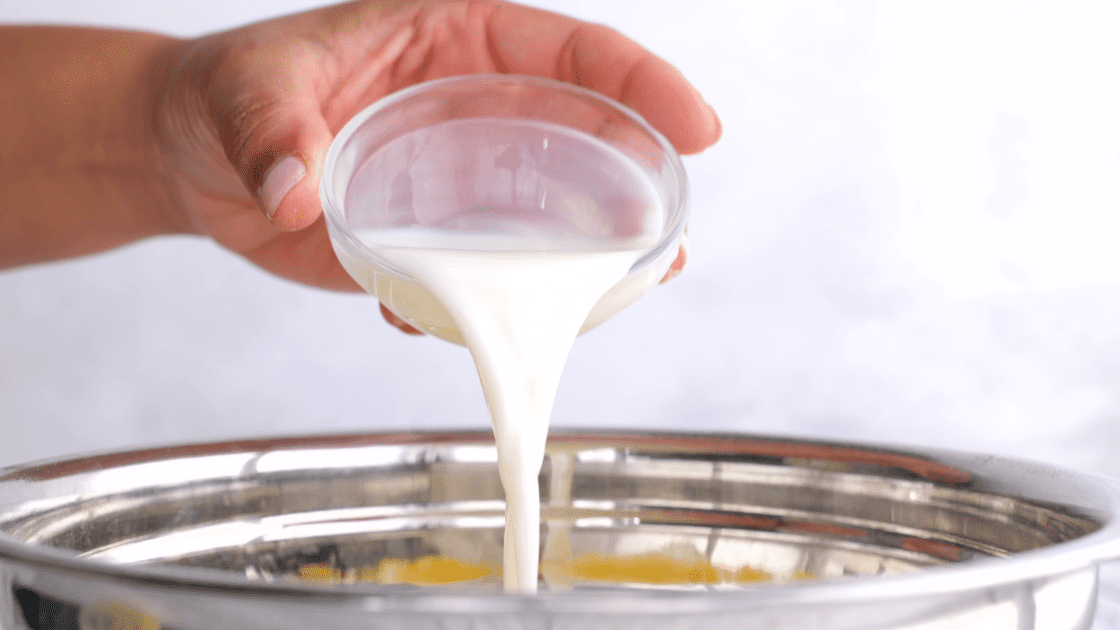 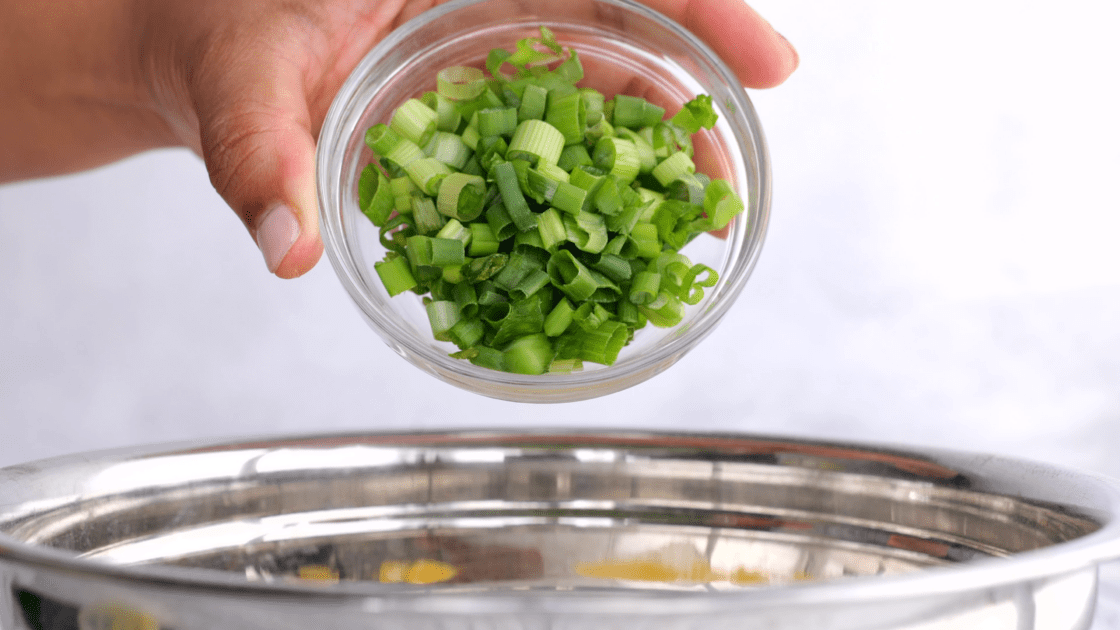 And chopped green onions to the mixing bowl. 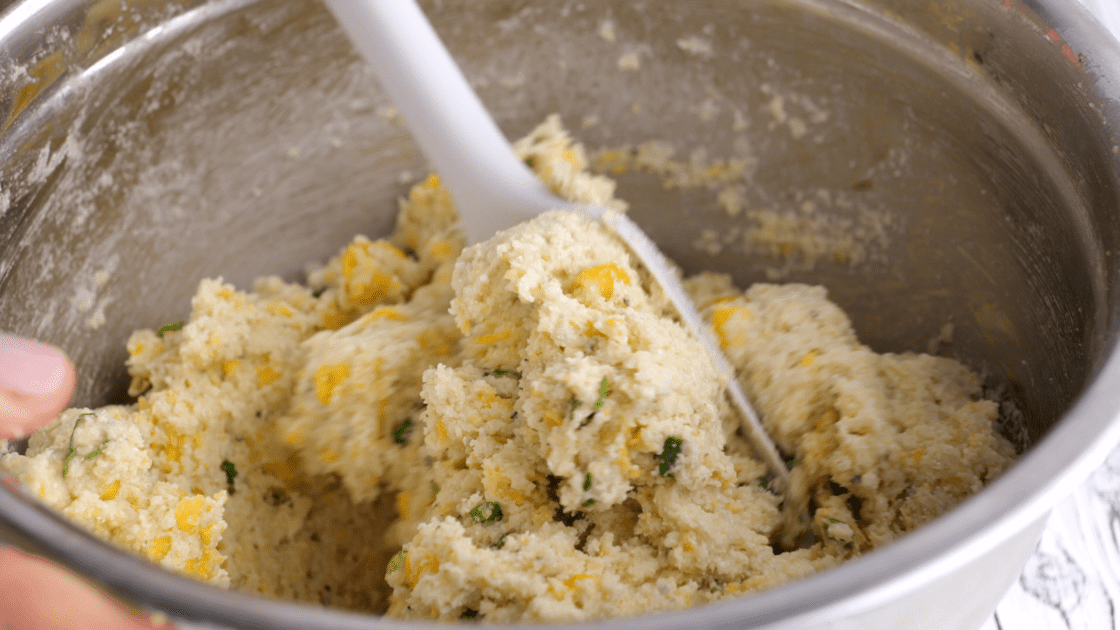 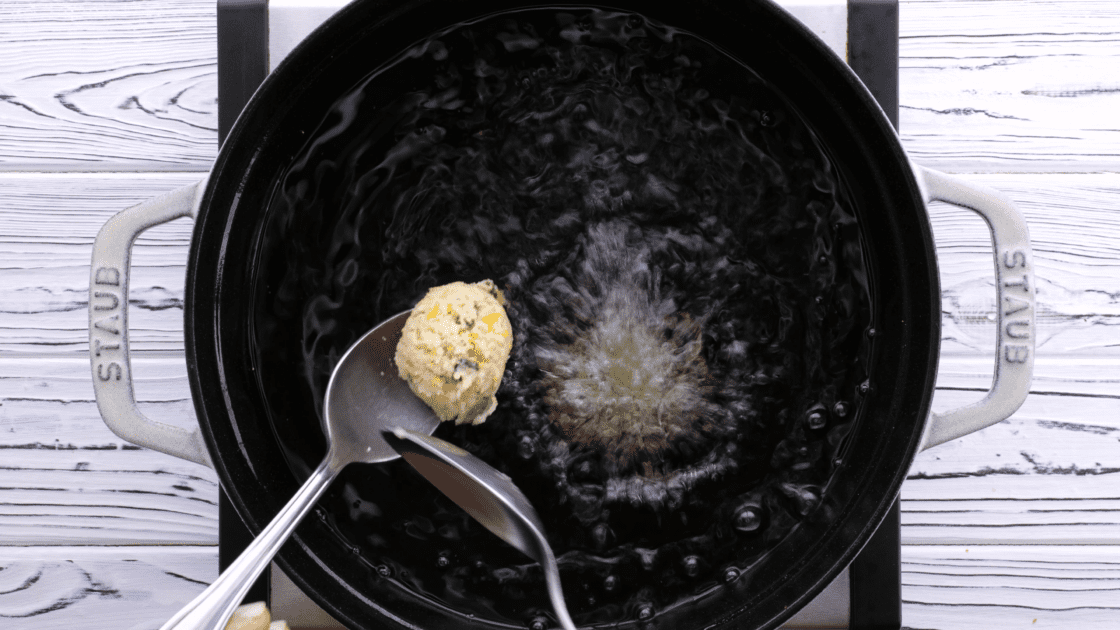 In a medium saucepan, heat two inches of oil over medium-high heat. When you drop a pinch of flour in the oil and it sizzles you’ll know the oil is ready.

Carefully drop spoonfuls of the hush puppy mix into the oil. 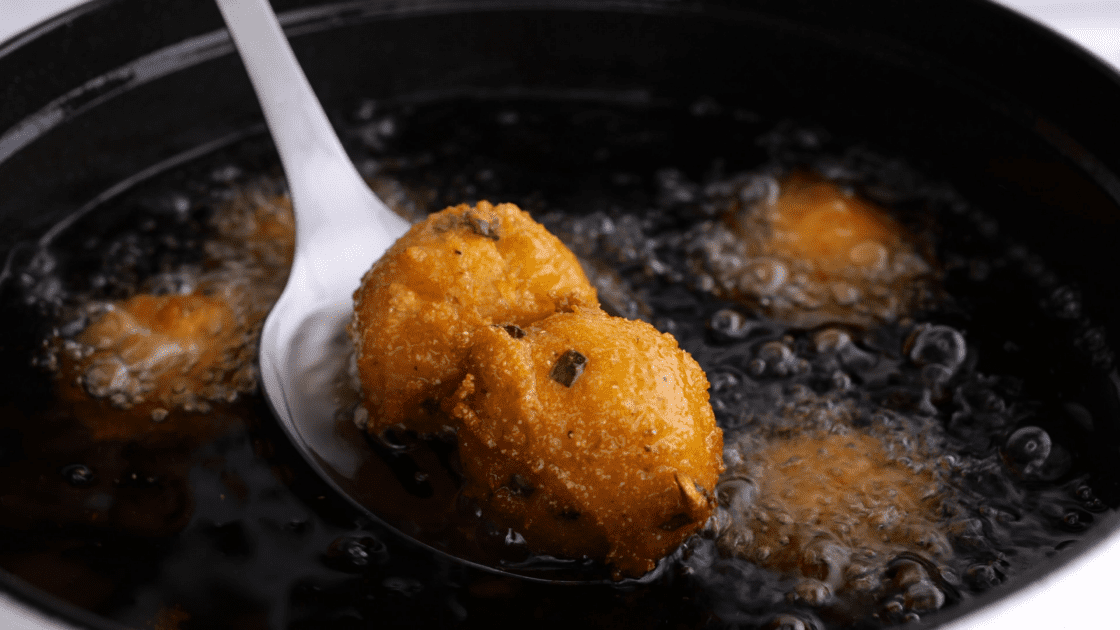 Allow the hush puppies to cook, turning as needed, until golden brown on both sides. 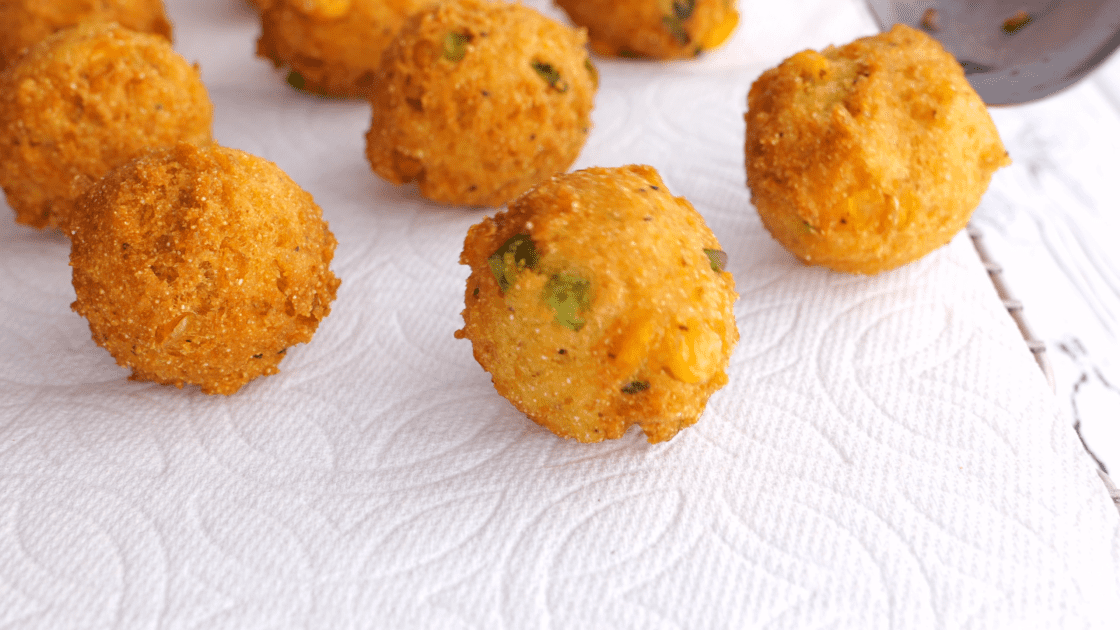 Remove to a paper towel-lined plate and repeat until all batter is used. 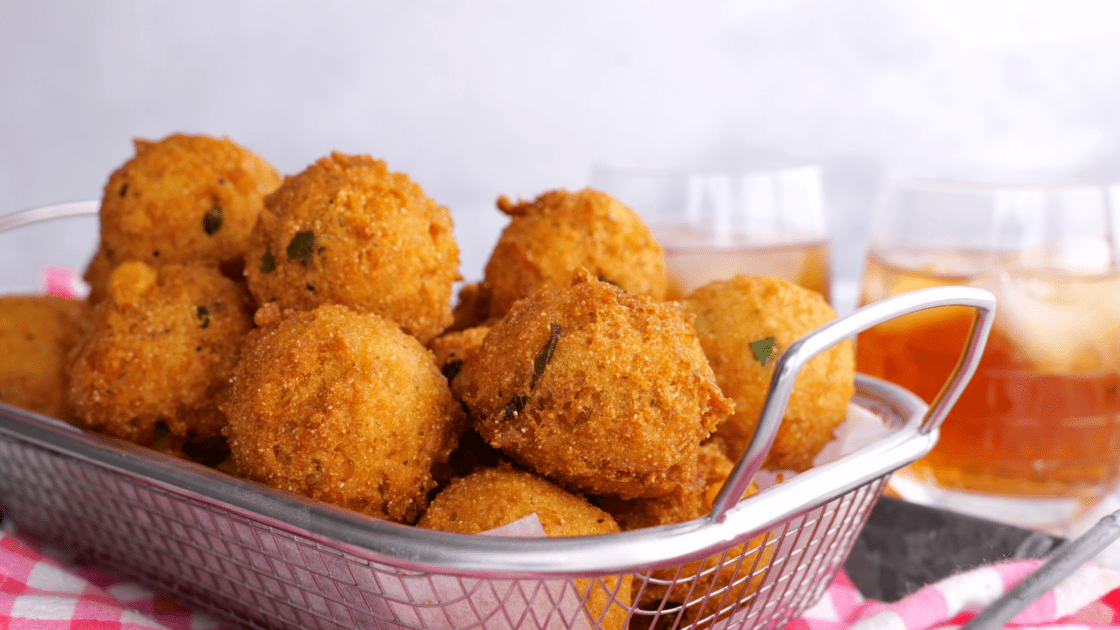 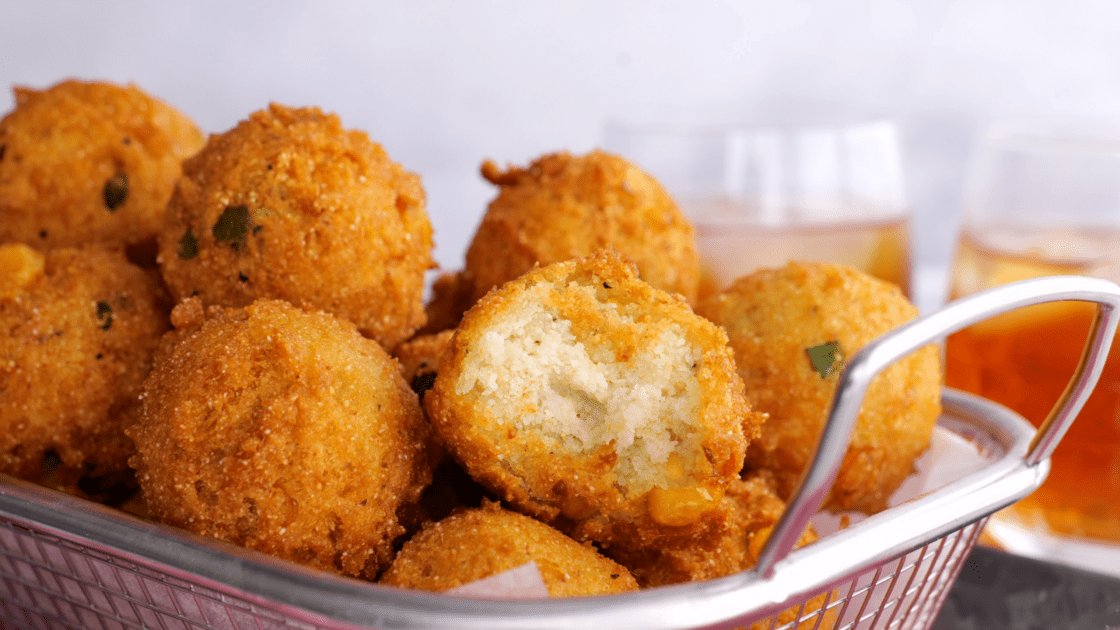 What kind of oil do you use to fry hush puppies?

I like to use coconut oil for frying because it has a high heat point. That basically means that it takes a very high temperature for it to break down and become a rancid oil. I use refined virgin coconut oil. This takes away the coconut flavor but if you like the flavor of coconut use unrefined. If you don’t want to use coconut oil use your favorite vegetable oil that you are used to. Canola oil and peanut oil are also great for frying too.

Why do my hush puppies fall apart?

Your hush puppies will fall apart if the oil isn’t hot enough. As mentioned, do the flour test or use a thermometer to ensure it’s heated to 365-375°.

What do you dip hush puppies in?

I love our comeback sauce for dippin‘, but you can use anything from ranch dressing to herb mayo. I make a little herb mayo dipping sauce with mayonnaise, lemon juice, and some herbs, or I have thrown together a sauce with cayenne pepper, sour cream, and some garlic…mmm, mmm! But you can use your favorite sauce for dipping. Even something simple like ketchup or tartar sauce.

What do you serve with hush puppies?

Hush puppies are commonly served as a side to barbecue and fried seafood in the South. Here are some great recipes to pair with a side of hush puppies: Southern-style pulled pork, North Alabama-style pulled chicken, beef brisket, maple glazed pork chops, fried catfish, and salmon patties. 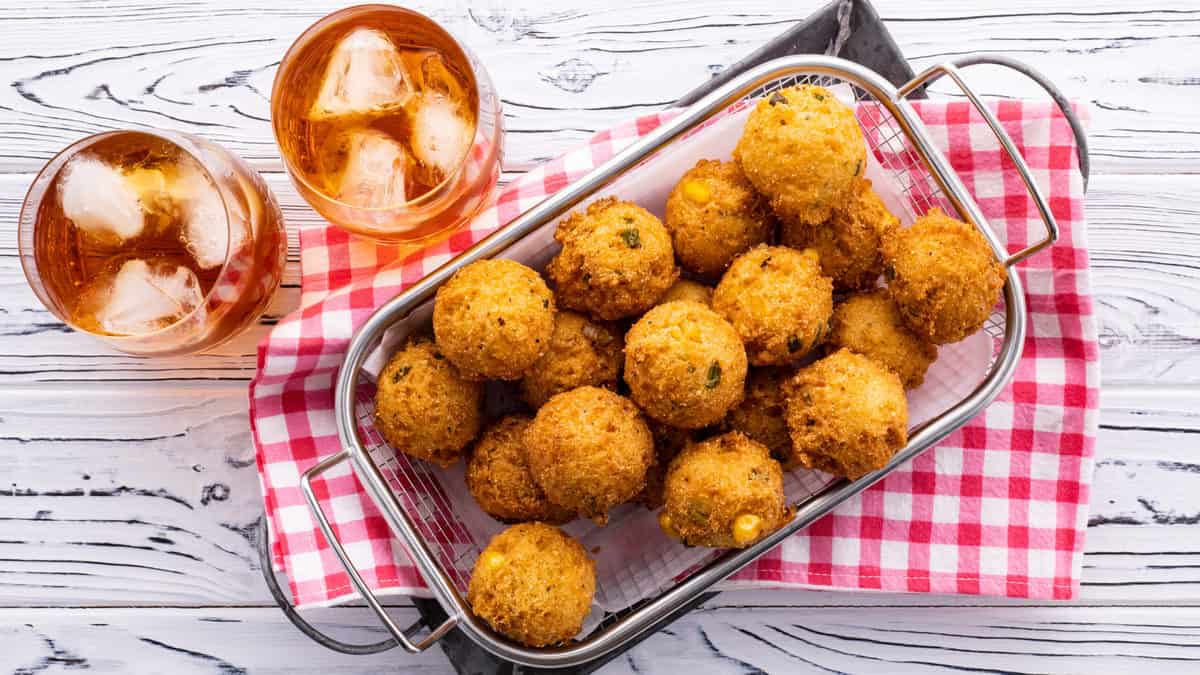 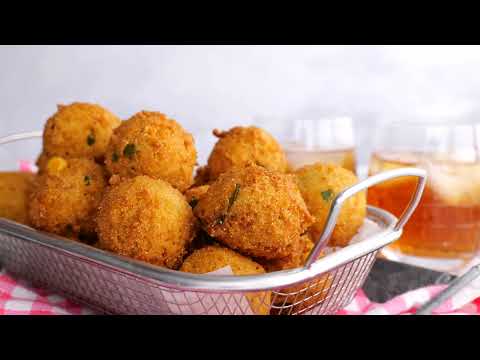 We can do no great things, only small things with great love.

My southern Granny made the best hush puppies, unfortunately I don’t know what her recipe was. I’ve been searching for one to try and will try yours as I have been craving them lately. Judy, Madison AL.

I hope you love these. Nothing will compare to what Granny made but I sure do hope it comes close!

I will be trying soon. Thanks again for another wonderful recipe.

These sound soooooo good. I have to try them.

I love hush puppies. I’ve never tried making them, but your recipe give me the desire to try & see how they would turn out of I tried it. I love trying out new recipes. I haven’t cooked or baked very much the last several years due to problems with my knees. I had both of them replaced last year & I’m now getting back into the adventures of cooking & baking. I love your website and everyone’s comments. Thank you so much for all of your recipes.

Unfortunately I don’t have a y type of onions but I’m making this recipe today! I can’t wait!

I live in the UK and am unable to buy self rising cornmeal mix. Can you please tell me how to make it myself. Thank you so much.