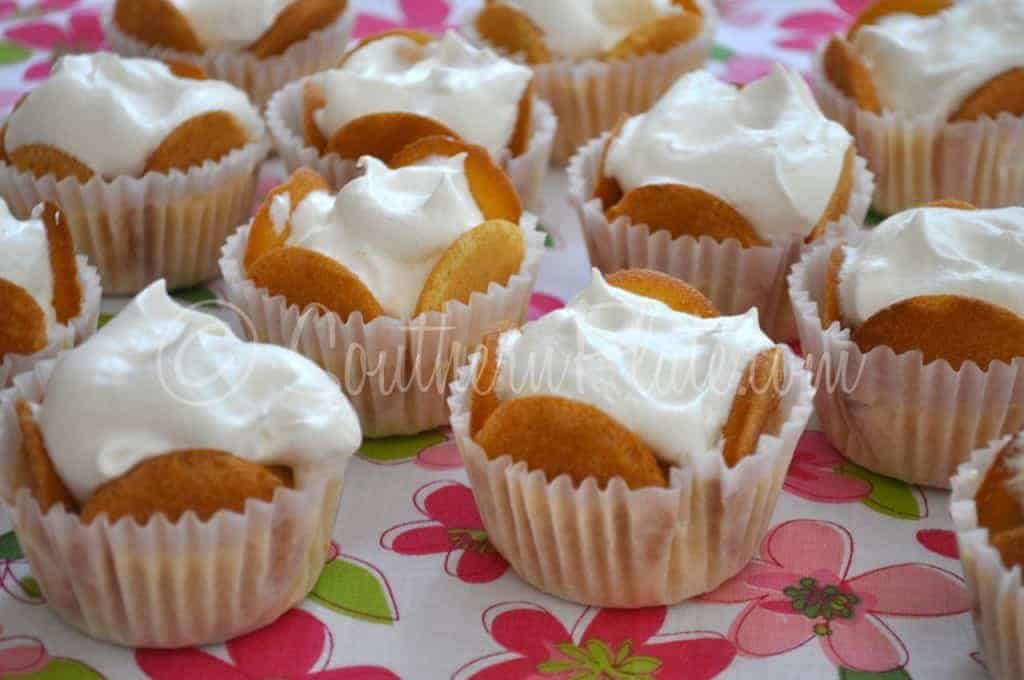 Oh Banana pudding. The recipe that has sustained many a Southerner through long journeys away from home just by sheer memory of the taste. The recipe that has had songs written about it, poems penned in honor of it (okay so I haven’t seen one but I’ll write one soon just to cover all bases), and the recipe that launched Southern Plate. I was a stay at home mom with a four year old daughter and a nine year old son. I had a home ec degree hanging on my wall gathering dust and a desire to write. So I started a little blog. It was on one of this free sites that no longer exists today. I’d write about what books I’d read, things we’d done with the kids, and sometimes I’d just go on there and write little stories about my life or the thoughts in my head.

Then, one day I realized that a friend of mine had never had homemade banana pudding. ~shudders~ I know, I know! I had to remedy that situation! The problem was that she didn’t know how to cook and you can’t just hand someone a recipe for homemade banana pudding and expect them to make it with no knowledge of cooking. So I decided to photograph step by step how to make it, and have fun goofing off a bit in the direciotns to boot (I don’t do “serious” very well). I posted that and the free blog host featured it on their homepage.

Now THAT got me excited! So the next day I posted Mama’s mandarin orange cake. They featured THAT on their homepage, too! The third day (I was on a roll) I posted how to make fried green tomatoes and that made the headline, right next to a picture and story about Llamas! I called Mama and said “Mama, I am as famous as the llamas!”. That afternoon I called my husband and said “I bet if I got my own domain I could get four or five hundred readers.” It seemed like a lofty goal but I wanted to try to impress him with my expectations of success :).

That day Mama and I played around with words, making lists of different Southern terms and putting them together and when my husband got home we bought SouthernPlate.com and began setting it up for my blog.

The rest of the story is ….Probably a post for another day. So many twist and turns, filled with divine intervention in the past almost four years that it could easily become a book itself. Eventually though, I’m gonna have to tell you the story about how my Mama and Grandmama got more excited over a free box of Little Debbie cakes than they did over a big time New York book deal. I love their priorities…

ANYWHO, today I’m bringing you a frozen treat for grown ups 🙂 While the kids have their water popsicles and ice cream cones, we can have these little beauties. Homemade Banana Pudding freezes wonderfully in individual serving sizes and lets you have this decadent Southern classic anytime you want. They’re great to keep on hand for last minute guests  or the afternoon unwind. This recipe makes about 18, but you can also just make half of them and use the other half to make a small warm banana pudding for two 🙂 . 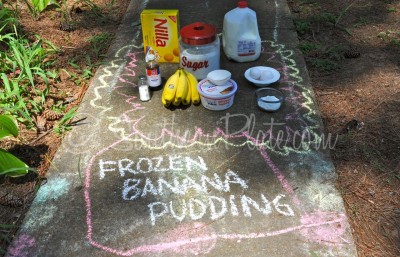 Here are our ingredients. I normally take the photos on my kitchen counter or in the diner but it’s summer and ingredients get tired of posing for the same old photograph. Being the considerate photographer that I am, I took them outside and let them play with sidewalk chalk a bit. As you can see, they liked this photograph much better. 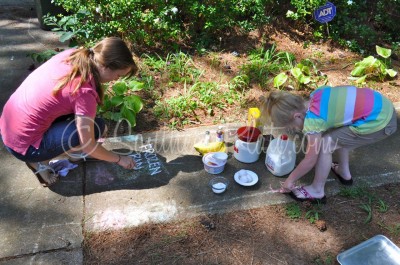 Some other people had fun, too. 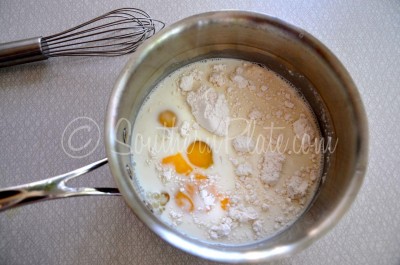 Place all of your ingredients in a medium sauce pot. As always, actual recipe is at the bottom of this post.

This is one of my gorgemous Calphalon pots that I ended up with as a reward for making it through TSA while wielding a skillet in the Charleston Airport. You can read about that by checking out this old giveaway post. The giveaway is closed but the story of how I ended up with this pot still resides there. 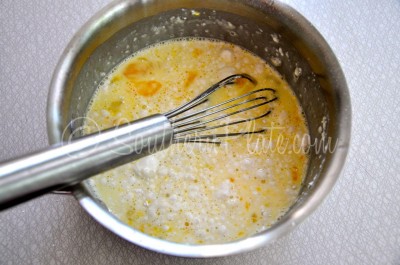 Mix that up a bit with a whisk.

There are a few kitchen tools that I like to have multiples of. Whisks and tongs are at the top of my list. I probably have five or six whisks and at least as many pairs of tongs. Big slanted wooden spoons also rank pretty high and I wish I had a bevy of pie servers because I seem to be forever cursed with taking pie places and losing a server somewhere in the deal – so I’m always looking to buy more of those. As many as I’ve bought throughout the years, I still have the hardest time finding one when I need it – but lots of places I’ve been have found pie servers in my wake! 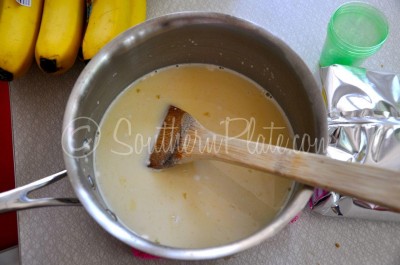 Cook your pudding over medium heat, whisking or stirring constantly, until it is thickened, about fifteen minutes.

I know this takes commitment but hang in there because if anything is worth the time, Homemade Banana Pudding is!

I let mine cook all the way through and remove it once just thick. You can cook yours longer to get it thicker if you like but I like a thinner pudding to soak down into my wafers really good. It also continues to thicken after you remove it from the heat.

Once it’s done cooking, stir in your vanilla. I usually forget this step so just do as I say, not do as I do.

It would be best if you stirred your vanilla in good before taking a photograph so that folks looking at said photograph don’t cock their heads and squint trying to figure out what those dark circles are….but roll with what ya got.

Pour banana pudding into a bowl or batter bowl (which is a bowl with a spout and a handle to make pouring easier) and place in the refrigerator until slightly cooled. 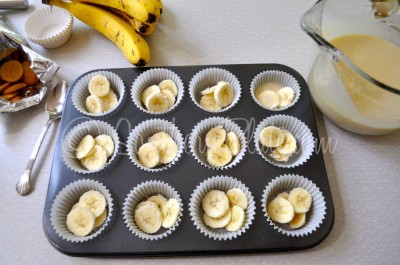 Line a muffin tin with muffin papers and place a few slices of banana in each cup. I do about four slices each.

NOTE: THIS WILL MAKE about 18, but I’m only making twelve here.

I took the rest and layered little banana puddings in cups for the three people skulking about watching me do this post.

Again, I’m a giver – in a family of skulkers no less! ~gasp~ 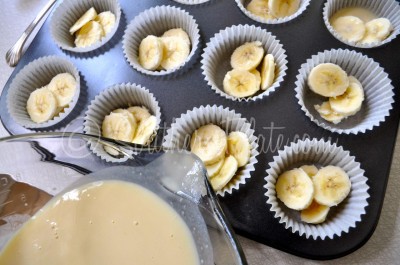 Pour a little bit of pudding into each cup. 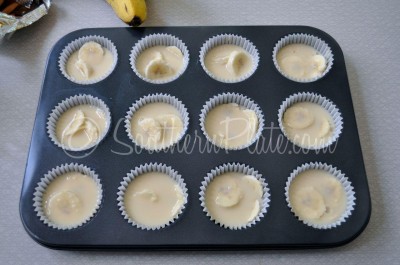 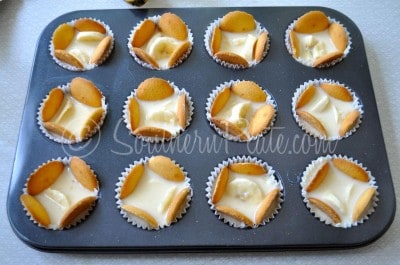 Place four Nilla Wafers in each one, around the sides so that the banana slices help hold them in place. 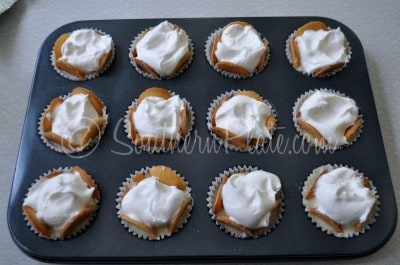 Add a dollop of cool whip on top of each ones and spread it touch the nilla wafers.

This is an important step because the top of the banana pudding crystalizes a bit as it freezes so this will help them stay all prettified. 🙂

Freeze in the muffin tin.

Once frozen, stick a butter knife down between the muffin paper and the tin and it should pop right out. Place all frozen puddings into a zipper seal freezer bag and return to freezer until you get a hankering for one. 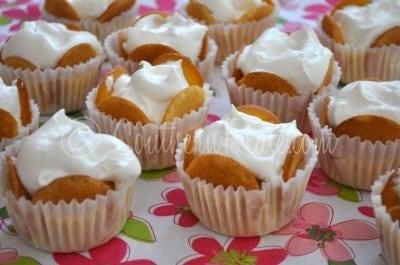 (The sooner, the better!) 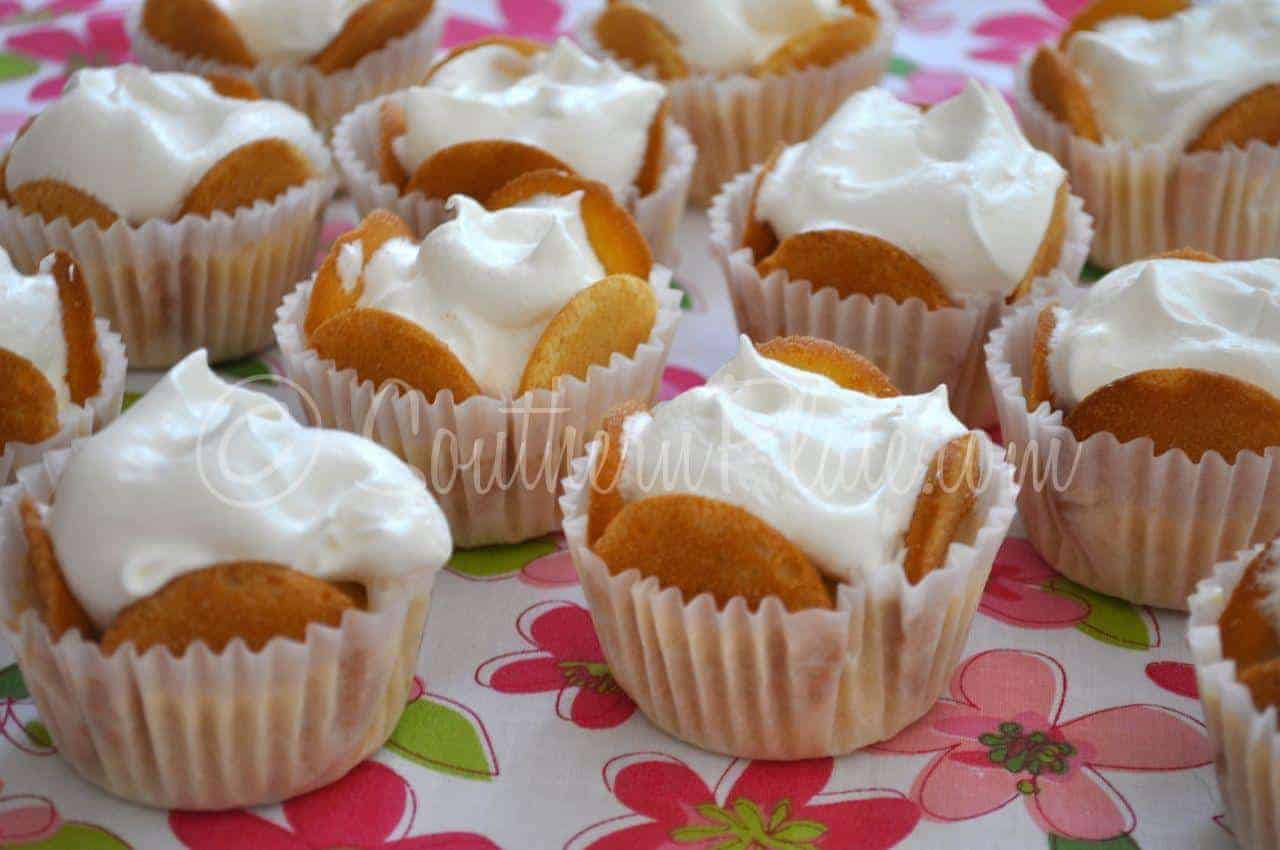 I’d LOVE to hear back from you in the comments below!

You must not lose faith in humanity.

Humanity is an ocean;

if a few drops of the ocean are dirty, the ocean does not become dirty.