If you’re on Facebook or Pinterest, I’d sure appreciate it if you could use one of those little buttons above! Now, let’s talk about Caramel Banana Pie, also known as Banoffee Pie! 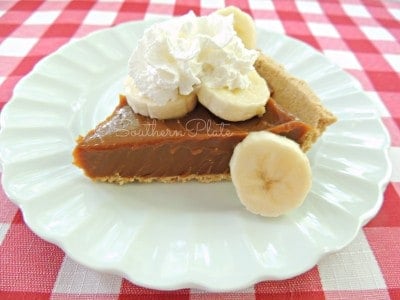 This pie is traditionally called a Banoffee Tart, but if I put that in the title many of y’all probably wouldn’t know what on earth I was talking about – I know I wouldn’t have! Besides, it is a Caramel and Banana Pie, so that works too.

Remember, there is not a single section of the Constitution of the United States of America nor a treaty passed by the United Nations that forbids us from calling a dish we make whatever we want to call it.

This Caramel Banana Pie (Banoffee Pie) is SUPER easy to make compared to traditional versions but every bit as decadent. What’s even better is that  this recipe takes less than five minutes to put together, rather than the hour+ of prep time most recipes call for. 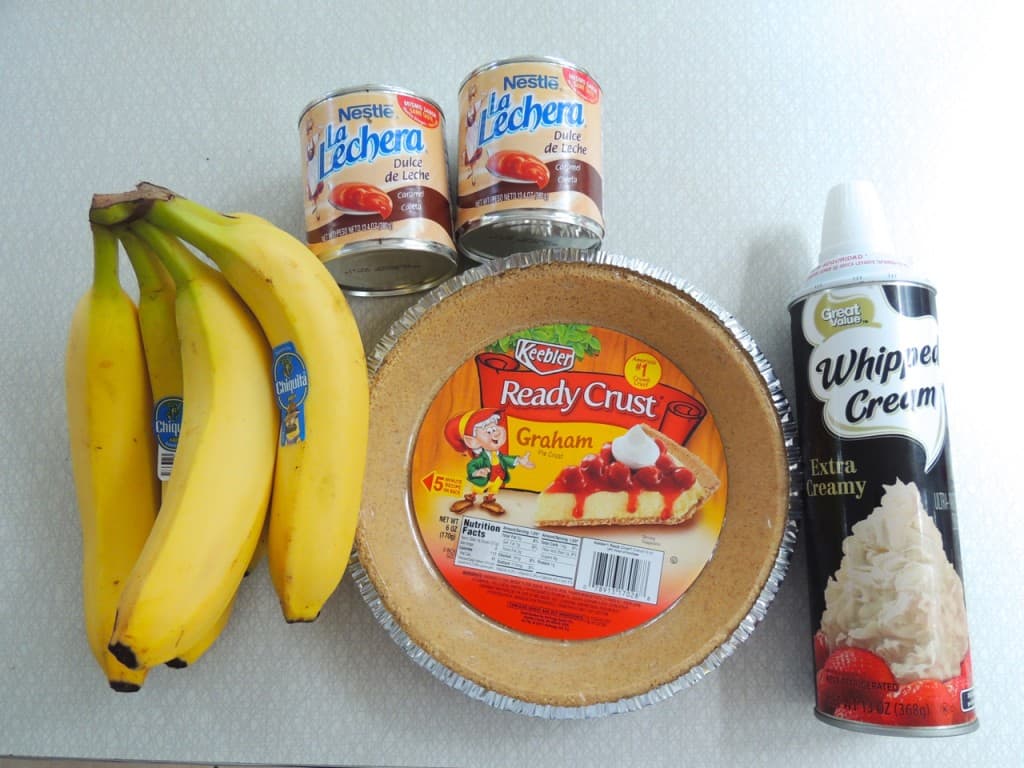 Now, most people start with sweetened condensed milk and make it into caramel themselves.  There are all sorts of ways to make the caramel for this pie. A popular method for this, which is extremely dangerous, is to boil an unopened can in a pot for a bit and cross your eyes, fingers, and pinky toes that it doesn’t explode on you (most of the time you will get lucky, but it is not worth the risk for me). Others opt for a safe method of cooking it in a hot water bath in the oven or using a double boiler to make it on the stovetop. 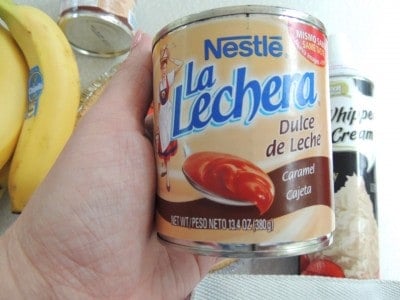 Me? My life is complicated enough and I know there is more than one way to tree a squirrel. I go to the grocery store and look in the Mexican foods section and buy that stuff already in a can. Nestle has already done the work for me and who am I not to accept their kindness 🙂

Besides, I could write sonnets about the quality and richness of this caramel.

You may have to look at a grocery store or two to find it but once you know who sells it around you, you’ll always know where to go. Most stores have it with their Mexican foods, right next to the sweetened condensed milk that cost as much as $1 less than the same stuff on the baking aisle. Some stores (like my local Kroger) actually have it right next to the sweetened condensed milk on the baking aisle. Either way, be on the lookout for this because it is well worth the trouble. 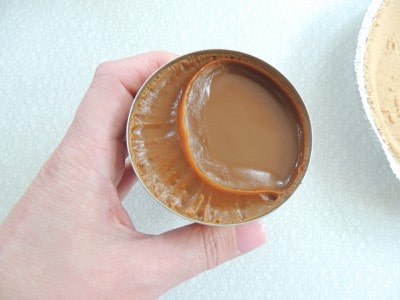 Now that we cut out 90% of the time required to make this pie by buying the caramel already made we only have about  3 minutes prep work to get this show on the road!

Open caramel and spread it into a graham crust. 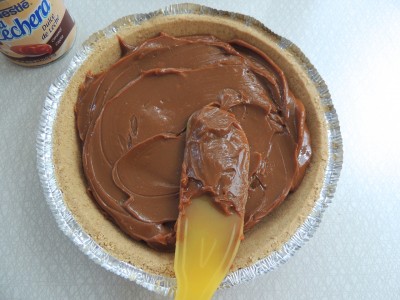 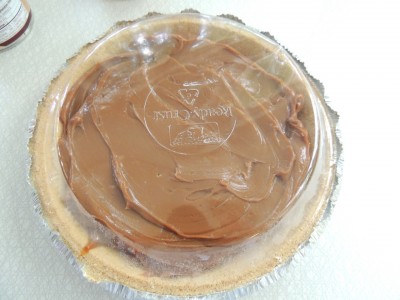 Cover and refrigerate for at least an hour, or until it is somewhat firm.

Note: Most Banoffee recipes call for topping your pie with sliced bananas and whipped cream at this point but unless you have enough people to eat that pie in one sitting, I suggest cutting the bananas and topping each individual slice just before serving to keep the pie fresh longer.

If y’all want to keep on watching the show just skip over this part.

Does this life ever get to be a bit much for you? If you’re anything like me (which I happen to know a lot of you are), it sure does. We have all of these things looming over our heads, work, needs, emotions, worry, stress, and sometimes their weight just begins to feel unbearable.

Sometimes the world around us rages like a storm. Our natural instinct is to rush in and get caught up in it. But when we do that, we just end up swirling around, as if in a funnel cloud.

How many years of our lives are spent swirling in a circular pattern, kicking up debris and getting nowhere?

I’ve learned that when that cloud kicks up, the best thing for me to do is remain centered, in the calmness that is the eye of the storm. Sure, it takes practice and self discipline but if we can’t, at the very least, control ourselves, what makes us think we can control a tornado?

I remember that beyond every storm is a sunrise.

And I hold steady.

And maybe I can be a ray of light from that sunrise to someone in that storm.

And maybe, while looking for hope, I can give hope, too.

Hold steady today and don’t get caught up in the storms, no matter how strong the winds seem to be.

~This concludes our intermission, Now back to our pie which is already in progress~ 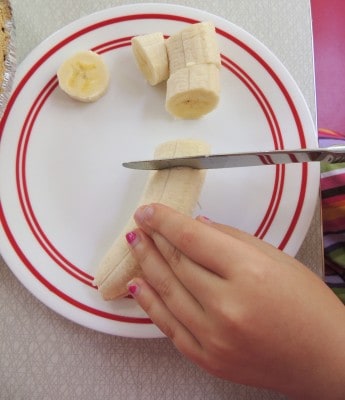 When ready to serve, slice bananas. This is a great job for little helpers.

Step away from life for a moment and take a bite of decadence. 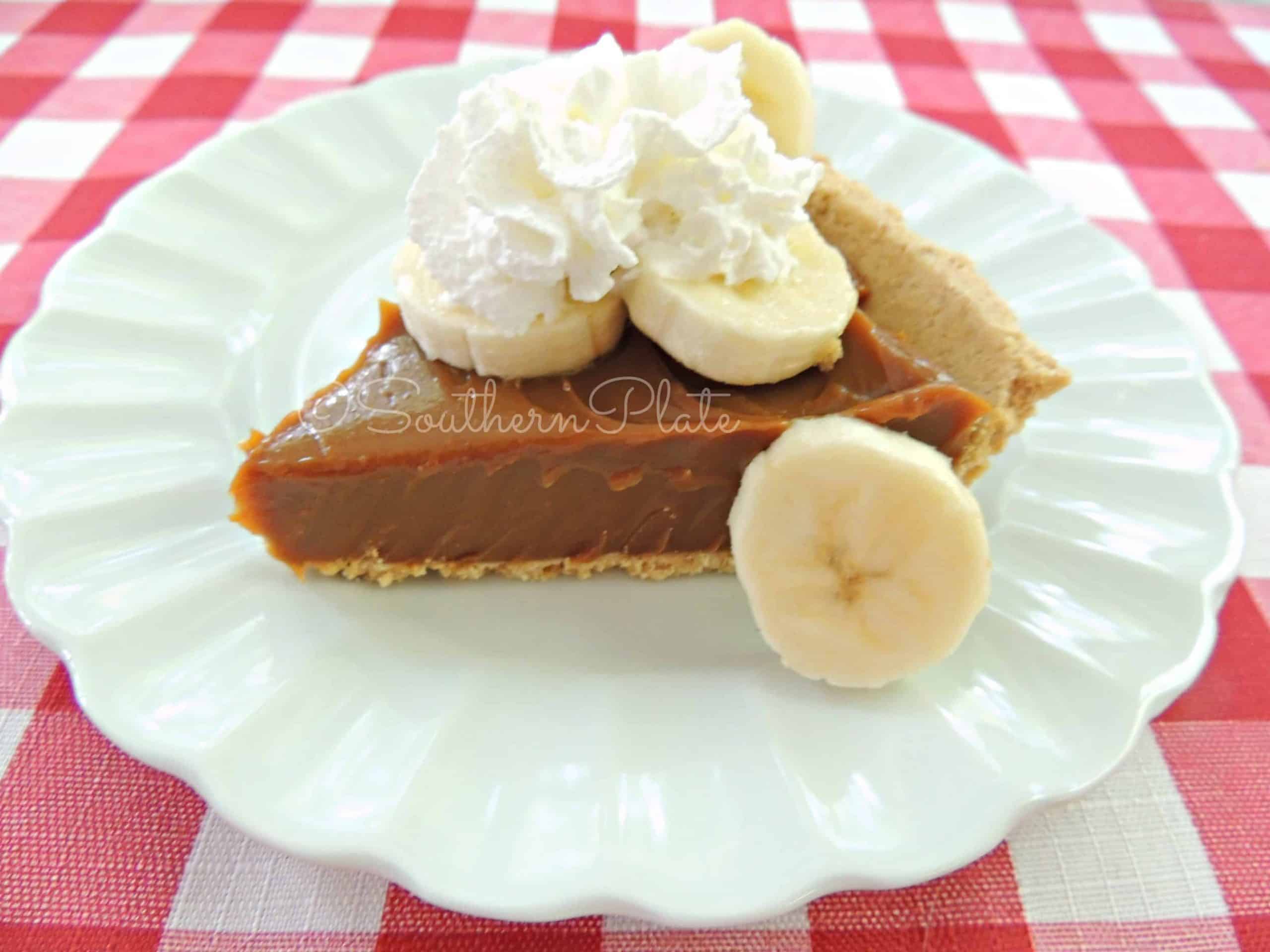 *This is commonly found in the Mexican section at grocery stores but sometimes on the baking aisle next to the sweetened condensed milk. You may have to look at a store or two until you find out who carries it in your area.

Stay tuned for a new pie recipe each Friday for the rest of the summer with Southern Plate’s Pie Day Fridays!

“There is NOTHING that I face today that GOD and I can’t handle TOGETHER.”

~Unknown. Submitted by CJ. Click here to read more or submit your own.