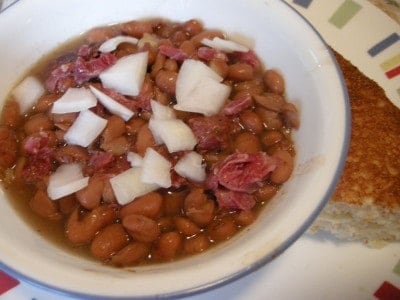 I’m not kidding when I call Pintos (or Pinto Beans) as you might know them, beloved in the south. A bowl of pintos, seasoned with ham, topped with onion, and served with a big old wedge of hot cornbread – thats just good old soul food in my neck of the woods.
Originally, this meal came about as staple in the diet of “po folks” down south. Dried beans were affordable, stored well, full of much needed protein, carbs, and fiber, and were filling enough to provide a stick-to-your-ribs meal that was greatly appreciate by people who had spent their day working the fields or other backbreaking labor.
For many Southerners these days, Pintos and Cornbread are the food of nostalgia. Mention them to my grandmother and you’ll here “MMmmmm, mmm, I just love me a bowl of pintos in the fall!”.
I’m not sure how some of you feel about this humble meal that we hold so dear, but I know one thing for certain – Nikki’s stomach will be growling when she sees this!!
Now there are several great things about dried beans. Firstly is their shelf life. Dried beans can keep almost indefinitely (My mother says they do keep indefinitely but I have never seen them last very long at my house because they are gobbled up!). They can also be an excellent source of protein, take very little to prepare, and are filling, to boot! Toss in how inexpensive they are and its easy to see why they were a depression era favorite.
Nowadays, I’ve seen several movements encouraging people to have a “meatless meal” night in their home both for health and economical purposes. Well folks, Southerners have been having meatless meals ever since the war between the states!
This method of soaking and cooking dried beans will work for any type of dried bean, not just pintos. Some of my favorite dried beans are: Lima beans (any variety of lima beans), navy beans, and of course Black Eyed Peas! Cooked beans also keep very well in the fridge with no difference in quality or taste when reheated. I often make a big pot of beans and eat them as a meal one night before serving them as sides another night or two that week! 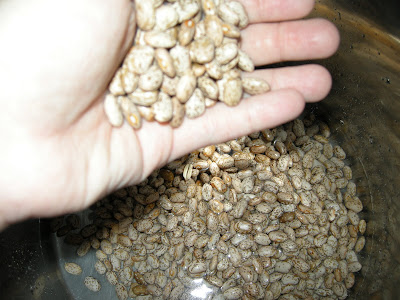 Sort your beans. Sometimes, tiny little stones make their way into your bag of dried beans. What we want to do is carefully pour a handful at a time and look through them. I just do this as I am putting them in my pot. 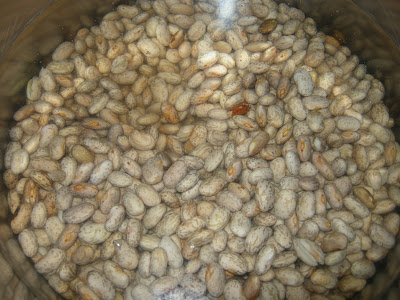 Fill pot completely with water. These beans are dried and they need to be soaked overnight before we cook them. You want plenty of water because you’ll be surprised at how much your beans soak up. I have filled a bowl to the brim with water before and wake to find the beans dry again and expanded to the top of the bowl!
There are methods of quick soaking on the package which involve sorting beans, covering with water and bring to a boil as a replacement for the overnight soak. While these methods work in a pinch, I find that my beans taste the absolute best when I just think ahead and soak them overnight. After using the quick soak method a few times, I’ve found that its just not worth it for me. 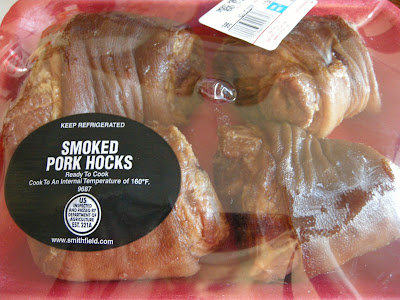 Seasoning: You’re going to need some meat to season your beans if you want to make them like the Southerners do! If you’ve ever eaten a whole ham at a Southerners house you’ve probably noticed them saving the hambone and wrapping it in foil to place in the freezer. We are notorious for saving bits of ham and bones from here and there so that we always have something to season our beans with. I actually didn’t have any today! Instead, I bought an inexpensive package of ham hocks. I am only using two of these so the other two will be seasoning for beans another day!
Another great thing about seasoning your beans with ham hocks or a ham bone with ham still on it is that after your beans are cooked all the way, we take out the hocks and pick the tender meat off of them to put back into the pot. Oh my! Bits of savory ham in with these beans….oh lawd we’re eatin’ good now! 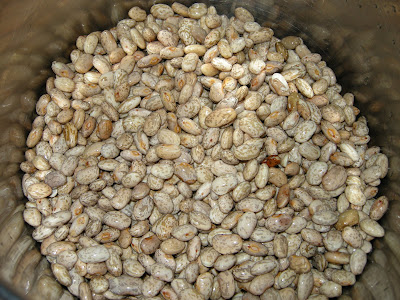 The next morning, drain off that water and cover them in new water. Fill your pot as high as you can because they are going to cook down often and you want them to remain at least covered in water. 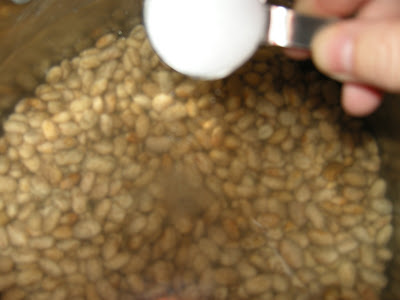 Here comes more seasoning…now to understand how I season my beans you’d pretty much have to meet my grandmother. She is as good hearted as the day is long, but a wee bit on the absentminded side (not that I’m any different!). So I called Grandmama about ten years or so ago when I was making dried beans for the first time.

“Grandmama, Mama said to call you and get you to tell me how to season my beans. I’ve already soaked them and filled them with fresh water but now I need to know what all to add.”
“Well, you covered them with water already?”
“Yes, covered with water already.”
“Alright, just add you a little salt and pepper, well a good bit of salt really, and then just cook ’em. That’s all I do!”.
“Thats it?”
“Yes, thats it, you don’t have to add nothing else.”
“Alright Grandmama, thanks!”

A few minutes later I got another phone call…

“You know, Christy, Mama always added some sugar. She always said a little bit of sugar was good in beans. About a tablespoon.”

A few minutes later I got ANOTHER phone call…

“and you need a bit of oil. I just always put a little bit of vegetable oil in mine. About two tablespoons or so’ll do it”

“And did you put any ham in it? Folks always season it with a little ham, you know. A ham bone or a hamhock or even a few slices of country ham if you have any in your freezer’ll do.”

So basically, every time I go to make beans I just basically go about and add everything I can think of to add and then I know they’ll be like Grandmamas – except the kitchen sink, but I wouldn’t be surprised if she started adding that in eventually.

I add one tablespoon of sugar, because my great grandmother always did like to add a “lil bit of sugar in thangs”. 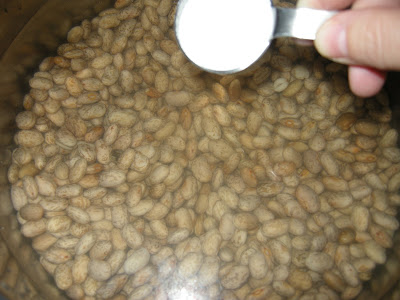 Two tablespoons of salt. You will likely end up adding more but two is a good starting point. 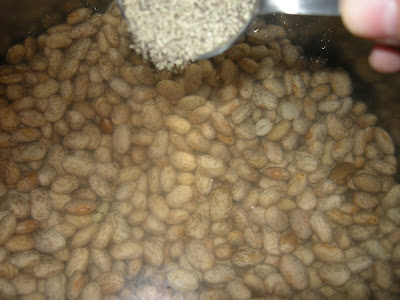 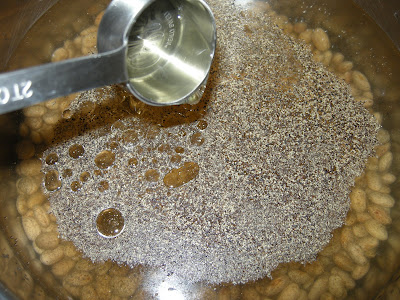 About three tablespoons of vegetable oil.

Now toss in your ham hock or bone or whatever you are going to use for the meat seasoning. You can do without that if you are a vegetarian…just pretend you put the ham in :). When my sister was a vegetarian, some time between her super model phase and learning to shoot a machine gun in the Army, my mother used to make pintos with ham as usual and then just hide the ham when Patti came to eat :).

Now just stir that up and bring to a boil. Once it is brought to a boil, turn it down to a simmer and simmer for several hours. I get mine on in the morning right after my son goes to school and then let it simmer all day, eating it at supper. By supper time that juice in the pot is every bit as good as the beans!!! 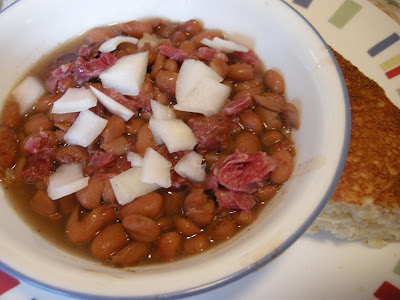 I ate mine with chopped onions, bits of ham from the ham hocks I used, and a big old wedge of Dixie Cornbread!!!
Nikki, what time you gonna be here?
How to Make Dried Beans
Sort your beans and place in a pot, covering with water. Let soak overnight. Drain soak water. Cover with new water. Add the following according to taste: Salt, pepper, sugar, and oil. A good rule of thumb is to start with a tablespoon of each and then taste it several hours later and add more if you think it needs it. Add one of the following for additional seasoning : Ham hock, ham bone, or slice of country ham. In a pinch, I have actually seasoned my beans with bacon before. Bring to a boil and then lower heat to simmer for several hours. Don’t let the water get too low, just add more every few hours as it boils down.

I want to give a special thanks to Life At The Lake for a lovely blog post about Southern Plate. She is so very kind, please do go pay a visit to her beautiful blog!

If you like Southern Plate, please tell your friends and Stumble me if you are a stumbleupon user!
Have a great evening!!!
Gratefully,
Christy
~~~~~~~~~~~~Hang on, I’m about to go off on a major tangent about my family below~~~~~~~~~~~~ 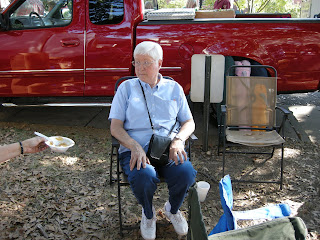 This is my grandmother “Grandmama”, sitting near my brother’s tent at our recent Fiddler’s Convention. 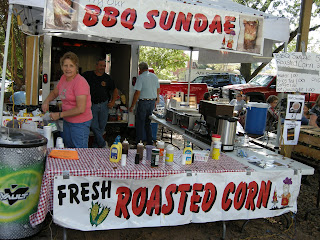 And this is Mama, after my brother suckered her into working the BBQ Sundae/Roasted Corn booth while he ran his cooker. 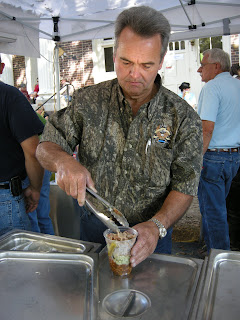 And now y’all are wondering “What on earth is a BBQ Sundae?”. So this is my dad making one…If you think he looks familiar and you are or have been a police officer, you’re probably right. Also, if you have ever been arrested and his face rings a bell….. 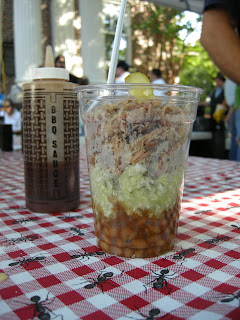 and this is the finished product. They are soooooooooo good! Baked beans layered with slaw (its a BBQ slaw, not a mayonaise slaw), topped with pulled pork and served with a pickle sticking out! My brother has a BBQ restaurant and this is one of his specialties. He has won the Jack Daniel’s Cookoff Grand Champion for his ribs and his smoked chicken!

He also has an AMAZING BBQ sauce (because I developed it from scratch, of course!). 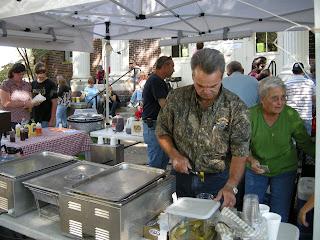 Do y’all think Aunt Sue (in the green shirt) is trying to get out of being photographed here?

Have a great evening!!!

*We welcome your comments!*