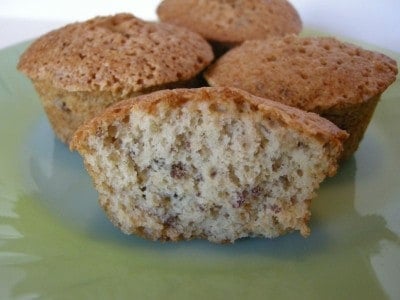 We are going to get to these delicious Butter Pecan Muffins but first I want to tell you about when I was a little girl and what it even has to do with Butter Pecan Muffins. I don’t know about you, but we didn’t have CD’s or even cassette tapes. This will come as no surprise to all of you but my nine year old simply can’t comprehend it.

I imagine he envisions us sitting on the front porch with a washboard and set of spoons as our only means of music. But my sister and I shared a record player in our room and Mama kept us well supplied with Disney albums (I still break into Disco Duck from time to time). Around the time I was six years old or so, I saved up my money and broke out of Disney to purchase my first two records. The first record I ever bought was “Mountain Music” by the group Alabama. 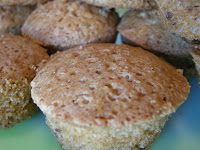 We have always been HUGE Alabama fans. As a girl, we had Alabama t shirts, Alabama records, and each one of us had a photograph of the band autographed by every single member thanks to my dad working security at one of their concerts (he was a Huntsville police officer at the time). Beyond the appeal of truly unique music, they were good old boys who still managed to remain “one of us” despite fame. Everyone has always loved them.

Jeff Cook served as vocals, lead guitar, and fiddle for that group. You know that roaring fiddle which widens eyes on Mountain Music ? Yup, that’s him.

According to his website: In addition to his rich vocals, Jeff Cook, the “Mr. Musician” who served as Vocals, Lead Guitar, and Fiddle for the group Alabama, has just about done it all. Alabama signed a recording contract with RCA records in 1980, launching a career that to date has resulted in 21 gold, platinum and multiplatinum albums, 42 number one singles, and more than 78 million records sold!
Alabama has received over 150 industry awards including Eight (8) Country Music Association honors for “Entertainer of the Year” and 2 Grammys, 2 People’s Choice Awards and their very own star on the Walk of Fame. They were named Artist of the Decade by the Academy of Country Music in 1989 and Country Group of the Century by the RIAA(Recording Industry Association of America in 1999. In November of 2005, Jeff and his bandmates received Country Music’s highest homor, being inducted into the Country Music Hall of Fame. Alabama is one of the 20 best-selling acts of all time. In the U.S. alone, they have sold more albums than Elvis and The Beatles combined.
In 2001, Jeff was named Guitarist of the Year by the Gibson Guitar Company. – Cookandglenn.com

Yesterday, I was explaining all of this to my son, whom I just mentioned had a violin recital last week. I pulled up this video on Youtube to show him the band performing Mountain Music. As the song neared the big fiddle part, I told Brady “Watch this…”. His eyes got “Big as dollars” as my grandmother would say and he just stared, open mouthed at the screen. When Jeff finished the big fiddle part Brady said “WHOA, can YOU play it like that?”

God love that boy, he places WAY too much stock on those two years of violin lessons I had over two decades ago! But, I can still play “Mary Had A Little Lamb” on just about any toy piano!
~puffs up with pride~

He and his wife, Lisa, sat down with Mama and, as most Southerners do, they got to talking about food. He went over this Butter Pecan Muffin recipe with her, saying that it was what he made for all of his neighbors at Christmastime each year and that everyone raved about them, but no one could ever place the secret ingredient! As he gave her the recipe, Mama texted it to me on my phone with the message “Call me”. I called her right away and sent my husband out for that secret ingredient that very night so I could make these the next day!

This recipe comes from a person who received a praise which carries much more weight than the Grammy’s or other awards.

In the South, it doesn’t get better than someone’s Mama saying “He was just the nicest person…” 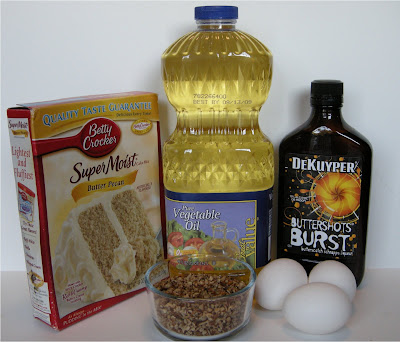 To make these Butter Pecan Muffins you’ll need:  A Box of Butter Pecan cake mix, cup of chopped pecans, Butterscotch schnapps, and the ingredients your cake mix calls for.
In my case, Betty Crocker wants me to have three eggs and some vegetable oil. The cake mix will call for some water, but we are going to use Schnapps in place of that.
Can any of you actually pronounce “Schnapps” without sounding like a bad guy character from an old WWII movie? I can’t. SCHHHHH- Nops!
I know some of you live where they don’t sell cake mix (waves to Su in Australia) and I apologize for having cake mix recipes yesterday and today! I promise something without any mix tomorrow!
Now I have to admit, Butterscotch schnapps didn’t sound that great to me. This recipe did though and I was excited. Now my husband and I don’t actually go out on Saturday nights (or any other night for the past oh….nine years or so) so what we do instead is my husband usually goes out for takeout treats for us and brings them home for us to enjoy after the kids are in bed. On this past Saturday night, my treat was a latte from Starbucks. I made a quick call to send him to the liquor store while he was out (I had to tell him where it was and I had to think about where it was before I could even tell him – we are just so worldly ya know).
He brought in a brown paper sack with the schnapps inside and handed me my coffee. Being curious, I looked at the bottle, opened it and smelled it and then that bottle just tipped right over and spilled  right into that little hole in the top of the Starbucks cup!
I was horrified…….and amazed at the precision of the spill. Of course, it was a brand new cup of Starbucks and it cost nearly five dollars so I hated to waste it!
YUM! 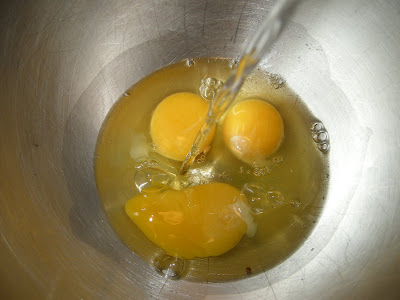 In your mixing bowl, place eggs, oil, and schnapps. What we are going to do is replace the water in the cake mix with schnapps. That is how you know how much to use. In my recipe, I am using 1 1/4 cups. 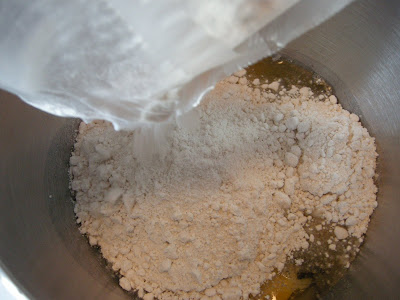 Pour your cake mix in the bowl. 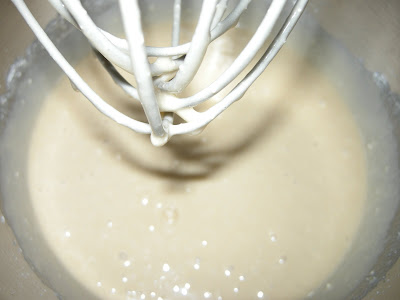 Mix that up well, about two minutes like you would for a normal cake mix. 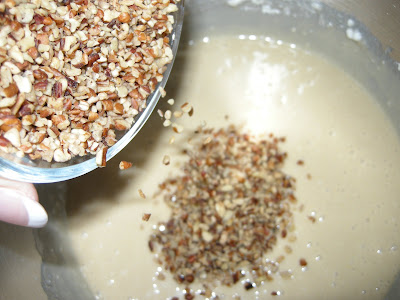 Toss in pecans. In the south, we pronounce these “Puh-Kawn”.
Mama said she once heard Paula Deen say that a “Pee-Can” is something you take with you when you go out in a boat fishing for the day (ok, that was a little embarrassing to type!).
Mama has taken up a new sport of taunting me by saying Pee-Can whenever we talk about pecan recipes. I am contemplating hanging her up by her pinky toes on the ceiling fan and turning it on if she doesn’t stop that mess. 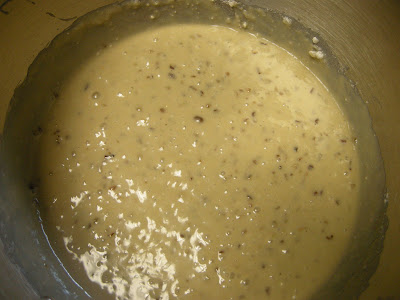 Mix until pecan are in there good, it will only take a few seconds really.
Now if you are anything like me, you are going to have a taste at this batter. The aroma was surprising, not the least bit alcohol-y but very butterscotch-y (I know y’all love my vocabulary!).
I tasted it….WOW. I tasted it again…WOW WOW.
I finally decided I had best get it cooking before I got drunk off of muffin batter…
(I’m not a big alcohol-y person at all) 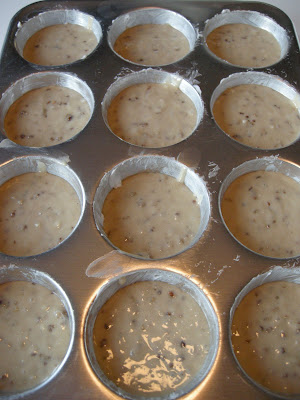 Pour into greased muffin tin and bake at 350 for about twenty to twenty five minutes. 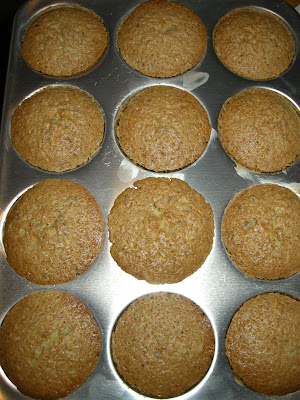 Oh my goodness gracious, these smell SO GOOD.
My entire house smells like butterscotch and pecans! 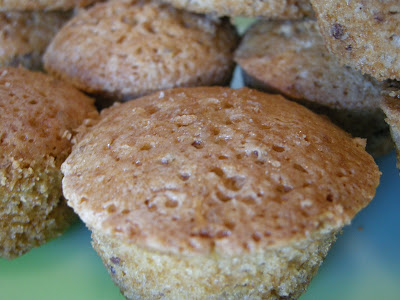 YUM!
These Butter Pecan Muffins are delicious. They taste very butterscotchey, buttery, and pecany. Jeff was right, I would have never had a clue what the secret ingredient was, much less how easy they were to make! 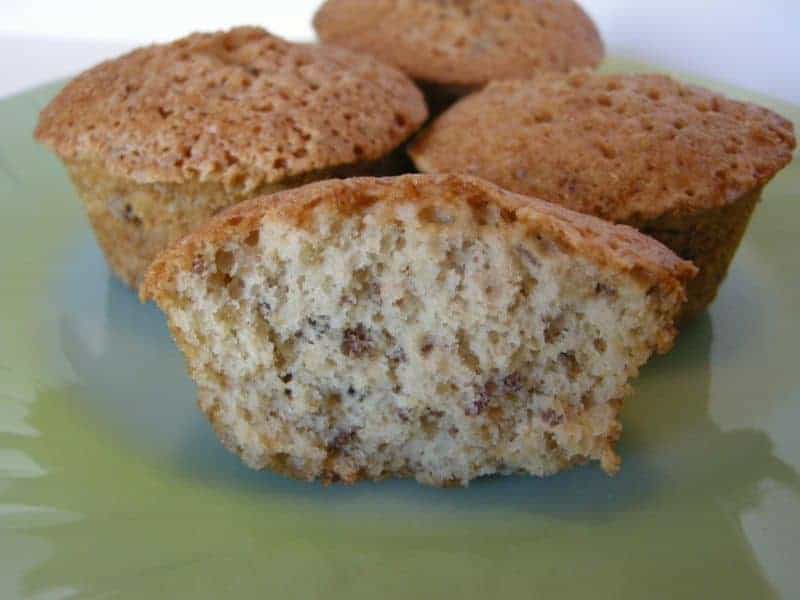 *Be sure to subscribe to my email newsletter (top right of this page) for a printer friendly version of each week’s recipes delivered right to your inbox at the end of each week!
Thank y’all for reading Southern Plate!!!
Christy

Oh play me some mountain music. Like Grandma and Grandpa used to play!

LOL! I have introduced my kids to that song now and they are dancing their feet off!

Well it’s not ALL bad here in Australia! hehe
Betty Crocker cake mix is sold here, but we only have the standard chocolate, vanilla, etc.
But, but, BUT!!!! I have found somewhere I can buy Duncan Hines mixes, and even some of the ingredients that you use. I don’t know why I didn’t think of this earlier, but there is a business called USA Foods, located in Victoria (which is another state to me) but they operate an online store. I’ve bought from them before, I don’t know why I didn’t think of it earlier! So I’ve got to try Duncan Hines yellow cake mix! It certainly would be easier than making it from scratch, especially since my mixer is now broken and I don’t want to have to keep asking my neighbour to use hers! 🙂

Hey, I’ve been looking for u over at my food blog. I had a get down Soul Food Sunday with tons of pics and I knew of all folks you’d be there to comment.

Darius, i went there and DROOLED over pics, then went to another blog to read about it…and i couldn’t decide where to comment!! Right about then my daughter…well we won’t even go into that. I AM DEFINITELY THERE THOUGH!! IT WAS AMAZING!

You really should try these topped with your peanut butter icing! I actually made this very cake mix on Monday and made your icing and it is an awesome combination.

They do sound good but I’m afraid I’d get caught going into the liquor store LOL! On another note, I have the Marinated Chicken Strips “a marinantin” right now. I couldn’t sleep so I went to Walmart at 3:30 am.
Trust me.. thats the time to go at that one.. nobodies there.