Check out the video for this recipe below! 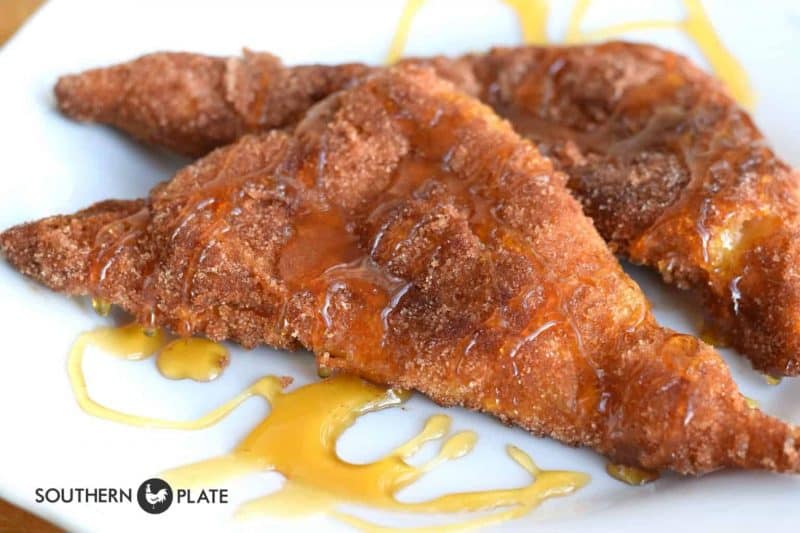 Warm sopapillas, dipped in cinnamon sugar and drizzled with honey. Are you ready for some? Let’s get cooking!

I think we all have favorites: snacks, desserts, beverages, etc, that we consider to be an extra special treat.  On the occasion that we gift ourselves with these delicacies we sit down, block out the world, and enjoy every second. That’s what sopapillas are for me.

Still, as much as I love sopapillas, I don’t think about them that often but a couple of times a year they pop into my mind and I just absolutely have to have one (or two). I have a homemade recipe for them that will be in my next book but today I’m showing you a shortcut recipe that is pretty stinking life changing. When you see the ingredients, don’t think you know what they are going to taste like because you are in for a surprise. Turns out, these ingredients were just sitting there waiting to reach the pinnacle of their existence and become sopapillas.

Take a deep breath and hold it…now scroll down. 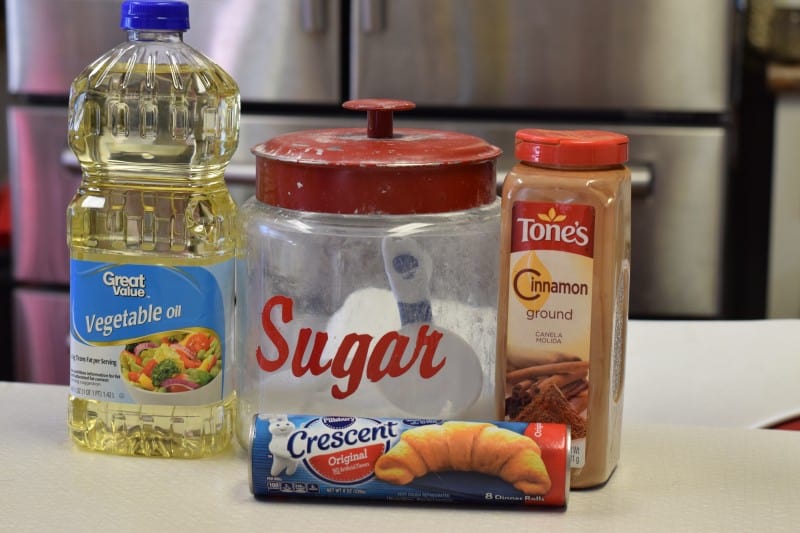 Yes. Crescent Roll Dough – Which should hereafter to be referred to as “Sopapilla dough that you can also make crescent rolls with”.

You need: Crescent Roll Dough (original is what I use), oil for frying in, sugar and cinnamon for coating. That’s it! And seriously, I know some of you are thinking “These are going to take like fried crescent rolls….” Get that out of your head. I done told you they’d be good now, didn’t I? I can’t believe you don’t trust me better than that after all this time together… I mean, some of y’all have been reading my website for five whole minutes now! If that isn’t enough time to build up trust I don’t know what is. Hurts my heart something fierce, it does.

Aw now don’t go feeling bad, you can repent later by eating an extra sapapilla in my honor. 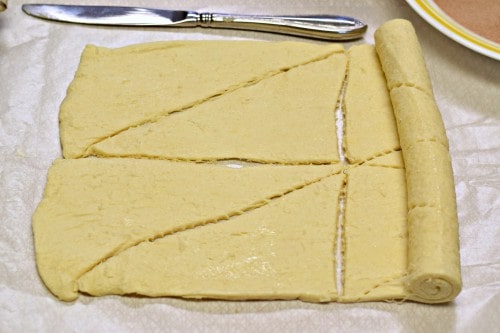 Roll out your dough and separate it at the seams. I like to cut along the seams to do this rather than pull it apart because I don’t want it stretching out too much. 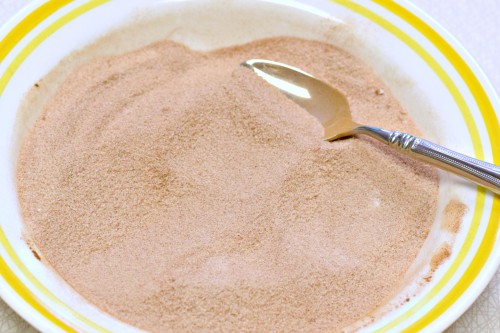 Stir your cinnamon and sugar together in some type of dish that is big enough for a sopapilla to fit in and set aside. Note that I ended up changing to an 8×8 baking dish for my cinnamon sugar later on in this post because this bowl wasn’t cutting it. 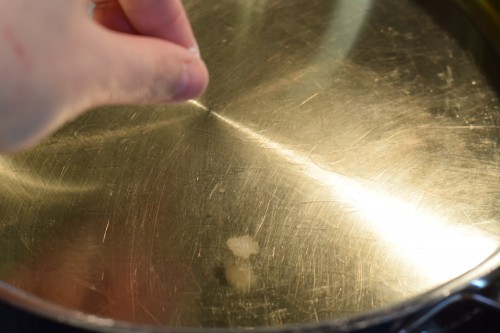 Pour hot oil to a depth of about 1/2 inch (or so) in a large skillet. Place that over medium high heat for a few minutes.

*You know it is ready to fry when you sprinkle just a pinch of flour in it and the flour bubbles like it is doing in this picture. Once you are at this point, turn the heat down to medium. 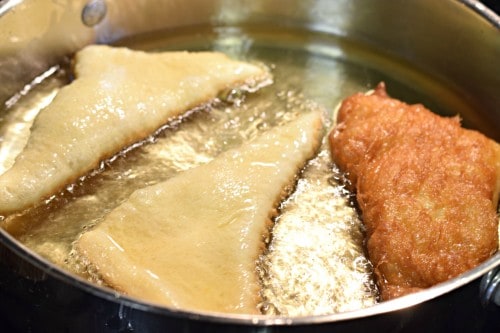 Once done, remove them with tongs (which you were hopefully using to flip them) and place them on a paper towel lined plate. 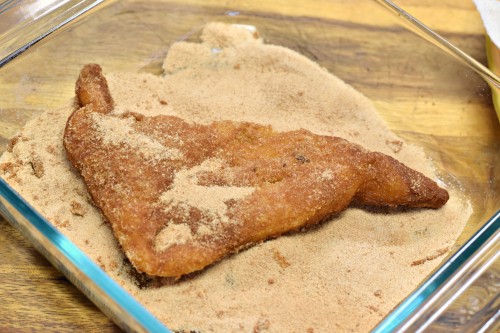 When you get around to it, you want to dip each side of each sopapilla into the cinnamon sugar mixture. I prefer to do it while they are still warm but sometimes life doesn’t afford me that opportunity and I do it later. No big. 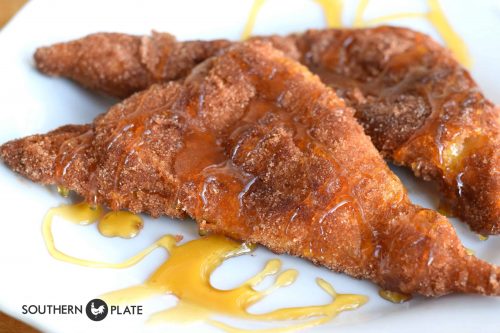 To serve, place on plate and drizzle with honey – unless your daughter doesn’t like honey on hers. In that case you would just place on plate and hand to child. Don’t forget to hand these to someone because it is considered poor etiquette to eat the entire platter yourself. However, if you live alone or are alone at the moment then do what you feel led to do but make sure you clean up all the cooking mess, and hide the evidence. We’ll say this never happened – I’m here for ya! 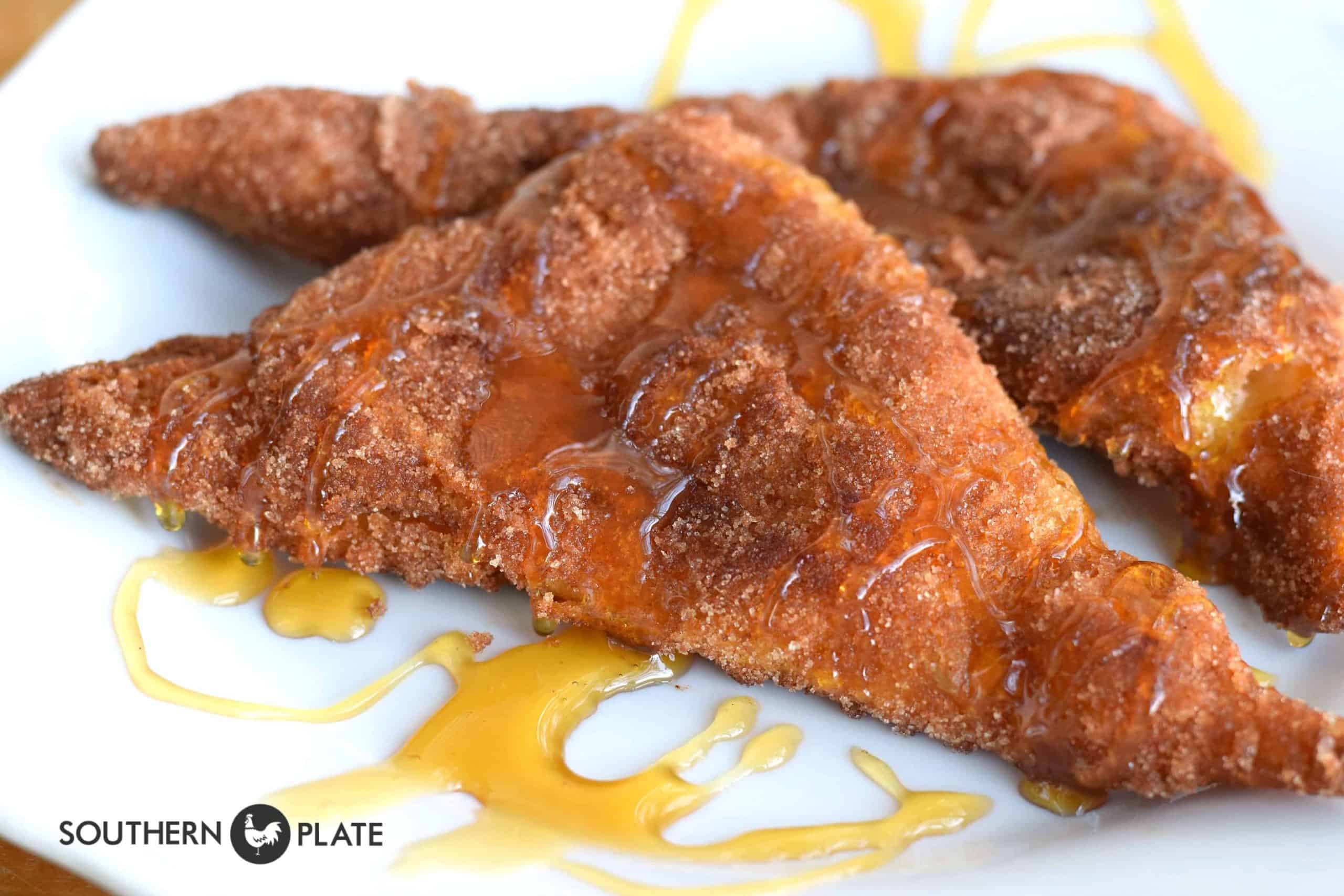 “The happiness of your life depends on the quality of your thoughts.”