This cinnamon-spiced peach kuchen is a soft and moist cake topped with juicy peaches and a delicious crumble topping. It’s a taste and texture explosion! 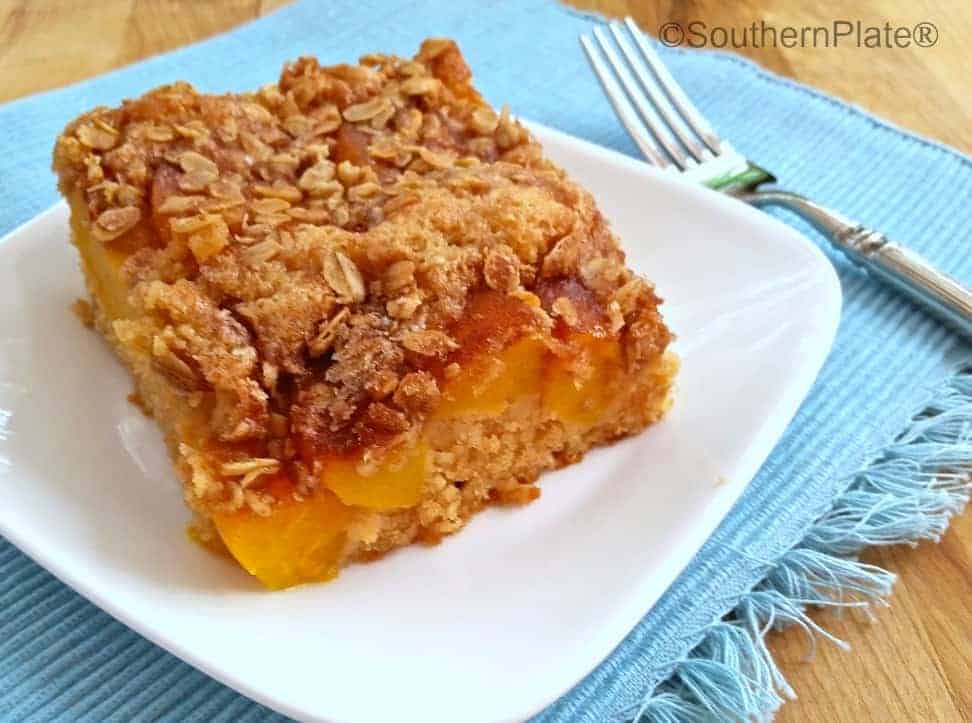 “Kuchen” is German for cake. Traditional kuchen recipes run the gamut from pies to coffee cake to simply sweet pastries. This cinnamon-spiced peach kuchen recipe is quick and easy, and even though it only resembles an authentic version, it is delicious enough to stand out on its own accord.

You can alter it in countless ways using seasonal fruit and it makes a great “not too sweet” dessert, which is usually how I serve it. This morning, my husband declared it to make a great breakfast as well. He is a “grab and go” type of guy who used to not eat breakfast at all. I’ve brought him a long way in the past 16 years!

So, what can you expect from my peach kuchen recipe? Well, the bottom layer is a cinnamon-spiced soft and moist cake (baked using a cake mix because we like to keep things easy around here). Then we add peach slices on top and finish with a crumbly streusel topping. Made with oats, butter, cinnamon, and sugar, it’s the perfect complement to the cake. Part cake, part crumble, this cinnamon peach kuchen is such an amazing dessert you’re going to want to try right away. So let’s get baking! 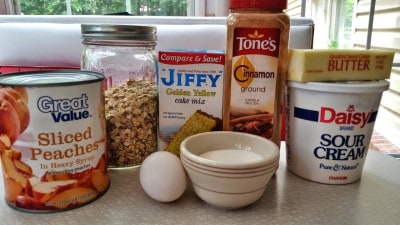 How To Make Peach Kuchen With Cinnamon 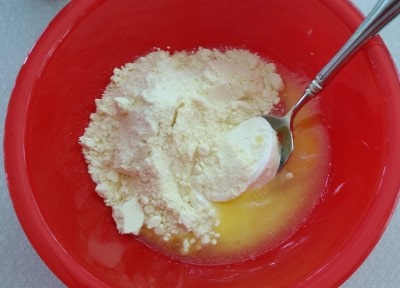 Stir it up with a spoon until well mixed.

It will be smooth but may have a few small-ish lumpy loos in it. You can keep stirring until you get those out if you want to. I find I lack the desire to do so :). 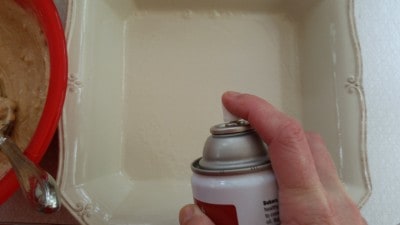 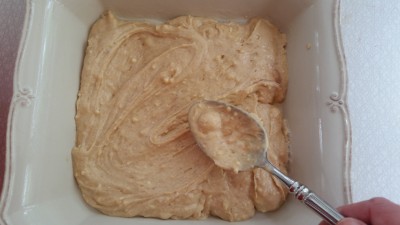 Drop the cake batter by spoonfuls into the cake pan and gently spread to even it out a bit.

Don’t eat this cake batter because it has a raw egg in it. However, if you disregard what I just said, and take your very life into your own hands, you’ll find that it is velvety smooth and has the most lovely taste :).

10 minutes? Christy, that isn’t near enough time to cook a cake!

I know. We aren’t cooking it fully. We are just partially cooking it, then we are going to take it out of the oven and mess with it a bit, then put it back and let it finish cooking. 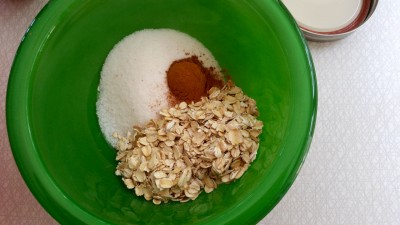 In a small bowl, combine the sugar, cinnamon, and oats. 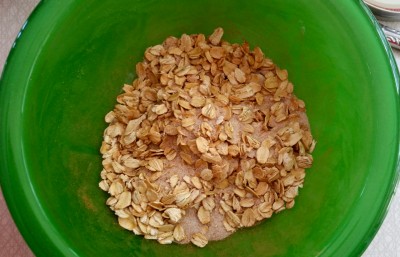 Stir that together a bit. I just toss it kinda with my hand. 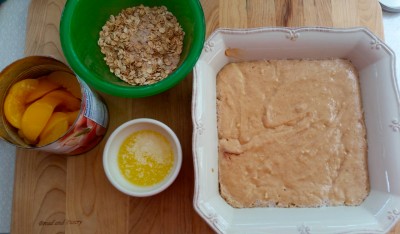 Alrighty, this is our cake after it has been baking for 10 minutes. 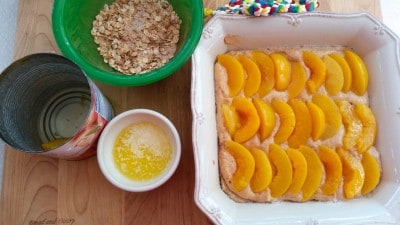 Top that with sliced peaches. 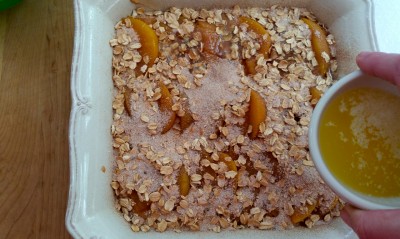 Sprinkle your oat mixture all over the top. 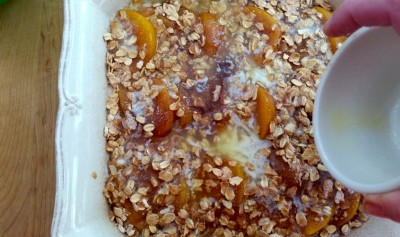 Then drizzle with the remaining melted butter.

Return to the oven for 30-35 minutes or until golden brown on top. 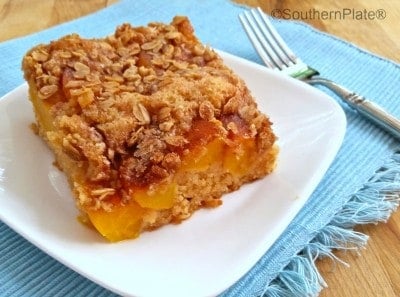 How do you serve cinnamon peach kuchen?

Serve your kuchen cold on its own or warm with a scoop of vanilla ice cream. You may also like it with whipped cream (here’s my homemade recipe) or homemade custard sauce.

Can this be made in cupcake tins cutting peaches in small cubes ?

The SouthernPlate Staff
Author
Reply to  Judy A

My mom always made kuchen. She made hers with sweet bread and poked holes in it and then poured over a homemade pudding. Topped that with cherries (we had a cherry tree) and on top of the fruit she made crumbles topped with cinnamon/sugar. It was fabulous. I make it sometimes for my family. My parents were Germans who lived in Russia. They came to the US when they were very young.

This is such a delightful “low calorie” dessert. I like it slight warm. Mmmm. Yummy goodness!

Oh yum Christy, it’s a peach cake and peach crumble/crunch in one! I have to make this soon. I’m glad to know that it’s not too sweet.

There was a comment someone else left about eating the cake batter and I know you’ve mentioned many times about raw eggs, etc and what’s interesting to me is that until I started reading US based blogs with recipes I never even heard about not eating raw yolk – not that most people would generally go around ingesting it as a meal. I even remember in school we learnt a couple of recipes and one was a banana smoothie recipe that required one entire raw egg. Perhaps though that will change here and I’ll start reading more warnings against raw egg due to the way so many of these egg laying chickens are raised and kept.

Okay, my birthday is on the 17th and I like very unusual cake. I had asked the other readers if they had any ideas, but then I came in here to the cakes. So, two questions. 1) Do you have a quick and good recipe for pickled peaches? And 2) How do you think the combination of the pickled peaches (substitute them for regular peaches) would go in the Cinnamon Peach Kuchen? That sounds sooo good to me. I think the combination that includes the cloves would really pop! And that is what I like, something that when you taste it, you will always remember that first bite and wish you had that again right NOW!! My Mom still calls me the original rebel! Love her anyway!

I will definitely be making this lovely cake very soon – for “the girls” when they come to play cards! However, the inspirational words beneath the recipe – “Wow!” – I have never read them before, and what an impact they made on me. I will be copying them down in a little notebook I keep with inspirational quotes. Thank you, as always, for such wonderful posts.

The SouthernPlate Staff
Author
Reply to  Paula B.

Thank you Paula, I am so glad to hear that they had an impact and I hope you enjoy the recipe!!