It may sound unique, but trust me, this rich and decadent chocolate fudge Coca-Cola pie will blow your tastebuds away! 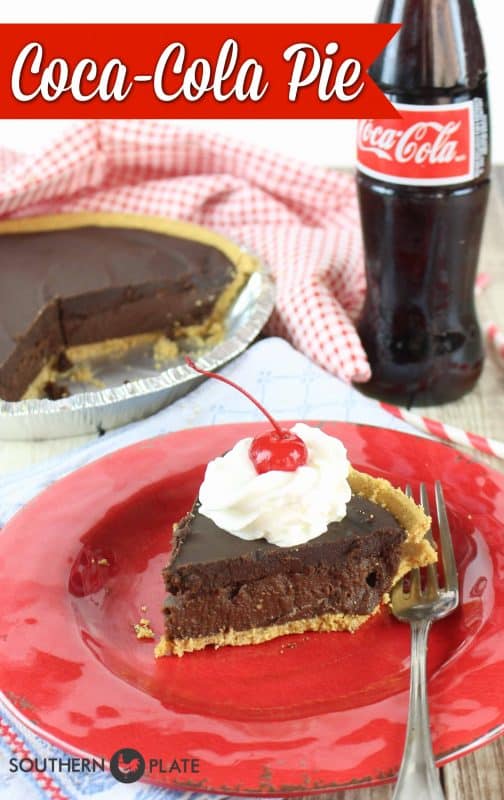 There is absolutely nothing like a cold Coca-Cola out of a glass bottle on a hot summer’s day. Nothing. As much as we love our “coke”, Coca-Cola Cake is a classic that has been a favorite for generations.

So when I wrote my third cookbook I wanted to create another classic bound dessert using our favorite “cold drink”. The result of my efforts is this deeply chocolate decadent Coca-Cola pie recipe and it’s so good, my friends at Silver Dollar City actually served it in their parks last summer.

To make this sweet and indulgent chocolate fudge pie, you’re going to need a graham cracker crust, cocoa powder, brown sugar, and a bottle of Coca-Cola, of course. It only takes 15 minutes to prep the pie and then you just need to refrigerate before adding the chocolate ganache on top and chilling once more. Yep, did I mention this Coca-Cola pie recipe is a no-bake pie? Another reason to give it a go! Go old school and serve a slice with a dollop of whipped cream and a Maraschino cherry. 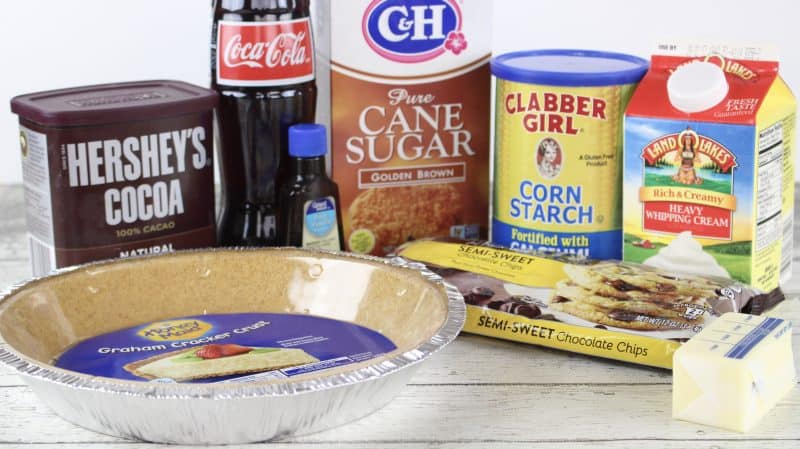 Sidenote: Have y’all ever been to the World Of Coca-Cola in Atlanta? That is a FUN place to go. We’ve been several times when the kids were younger and Atlanta traffic wasn’t nearly as crazy as it is these days. Highly recommend it – the museum, not the traffic. Time to make a pie!

How to Make Coca-Cola Pie 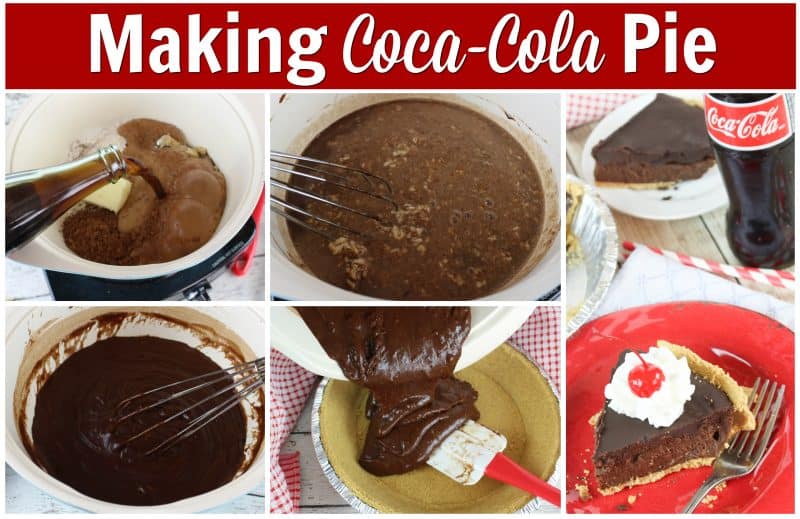 Combine all ingredients except vanilla extract in a saucepan and then place over medium heat.

Stir constantly with a whisk until thickened (5-10 minutes).

Remove from heat and stir in the vanilla extract.

Pour the pie batter into the graham cracker crust.

Cover and place in the refrigerator until thoroughly chilled.

Now we need to add our layer of ganache. This will add a little extra indulgence as well as create a nice protective layer on top of our filling.

Ganache is just a fancy name for a glaze, icing, sauce, or filling for pastries, made from chocolate and cream.

It is one of the easiest things you can make nowadays. All you need is heavy cream and semi-sweet chocolate chips. The exact amounts are below in the printable recipe card.

Place the cream and chocolate chips in a microwave-safe bowl and microwave this at 45-second intervals, stirring after each, until fully melted and blended. This won’t take too long. 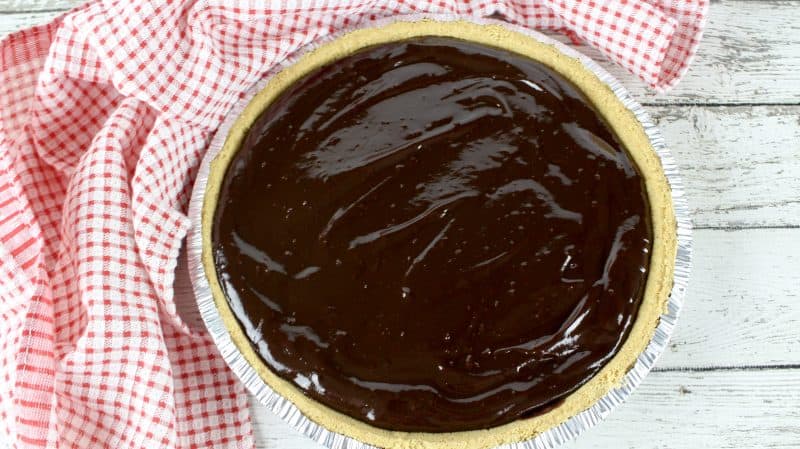 Pour over the pie and spread to cover. Cover this and refrigerate until chilled.

It will look like this. The ganache looks hard but it is still easy to cut, kind of fudge-like. 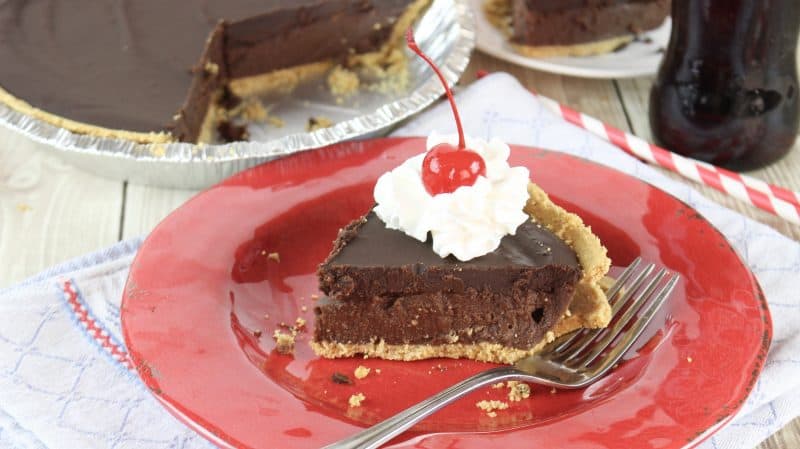 To serve, I like to top each slice of Coca-Cola pie with a dollop of whipped cream or a scoop of vanilla ice cream.

Store pie leftovers in an airtight container in the fridge for up to 4 days.

Now, I haven’t tried this with anything other than Coca-Cola, but just like my Coca-Cola cake, I’m sure it would taste just as good if you use a similar soda, like Dr. Pepper, Pepsi, or root beer.

Can Coca-Cola be used in baking?

Yes, the coke bubbles act as a leavening agent, helping cakes like my Coca-Cola cake to rise and become all light and fluffy.

Is Coca-Cola pie the same as water pie?

This Coca-Cola pie recipe is not the same as water pie. This is a chocolate pie with chocolate ganache. Meanwhile, a water pie is a creamy buttery pie literally made from water. Water pie has risen in popularity again recently thanks to TikTok, with people substituting water for a soda like Sprite and Coca-Cola. But this isn’t what this particular recipe is about.

How do you make a Jack and Coke pie?

To make a Jack and Coke pie, add up to 1/3 cup of Jack Daniels to the other filling ingredients and follow the directions as instructed. Most Jack and Coke pie recipes include a Cool Whip topping and caramel sauce/drizzle on top too.

Here are a few other recipes you may enjoy with soda as an ingredient: 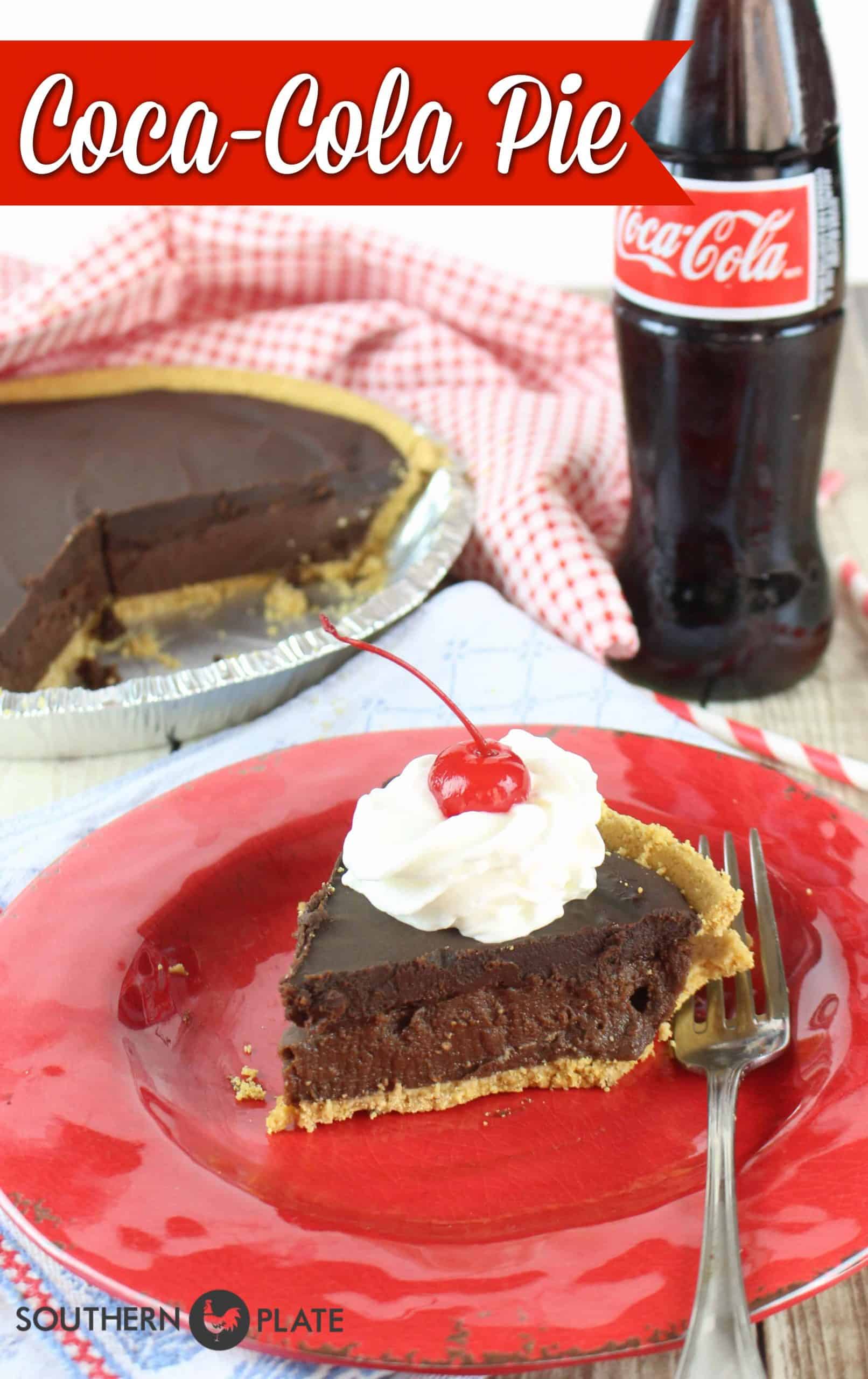 Never mind about the crust. Just saw what you said. Sorry.

My question is the pie crust. You say baked pie shell. Is it regular or like the picture graham cracker shell.

Oh my! Next time someone leaves their coke here, I know what to do with it! : ) That chocolate filling looks amazing!

I hope someone leaves behind a bottle soon 😉

Looks yummy…have you made this without the ganache? I would like to make the pie, then cover the top with whip cream and shaved choclate.

The SouthernPlate Staff
Author
Reply to  Marie b

That would work perfectly. You just need to cover it with something to keep the homemade pudding from developing a film on top. Whipped cream and shaved chocolate sounds ideal.

Nothing like a recipe for something this yummy that I’m the only one who can eat it!! Hubs has diabetes and my dad’s heart goes crazy with caffeine (no more CICU, thanks!). Can this be frozen so I can eat just one piece at a time…otherwise I just know a piece would be going down for breakfast, lunch and dinner and be gone in 2 days!!

The SouthernPlate Staff
Author
Reply to  Susan the Farm Quilter

I’ve never frozen it but it may work. Just know that the ganache could develop a bloom, which is only cosmetic.

Is there a low carb recipe for this?

It is possible to make a low carb ganache based on the chips you use and you could use swerve and Coke Zero for the pie.

Christy, This looks awesome! Could I make it with a frozen pie shell ( of course I know to bake it) and if so would you recommend regular or deep dish…

It can be made in a frozen shell but as this isn’t baked you’d need to bake the shell first.