This German chocolate pie recipe includes a rich and creamy chocolate filling inside a flaky buttery pie crust with toasted coconut and pecans on top. 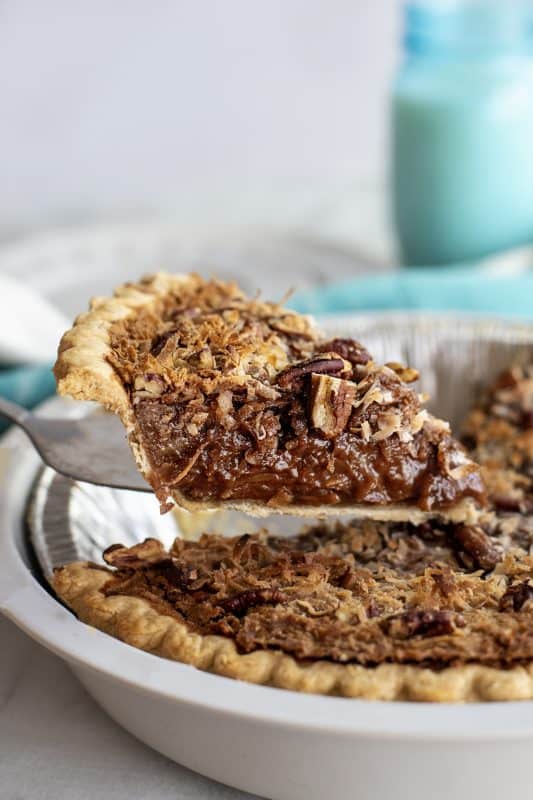 This is a decadent German chocolate pie recipe that is really simple to make. It is perfect for any holiday dinner (how good would it look on your Thanksgiving table?), but it also makes an ordinary family dinner extra special. Once again, I have Mama to thank for passing this pie recipe down to me. If you’ve ever had German chocolate cake (a very popular dessert in the Amish community), this pie is very similar. I’ve included more information about its origin below, but spoiler: it’s an American dessert and has nothing to do with Germany!

I promise this is an easy German chocolate pie to make. First, we melt the deliciously decadent chocolate with butter and then stir in the evaporated milk. Together, this ensures our pie filling is extra rich and moist, like a fudge brownie batter. I bet that caught your attention 😉.

Then we stir together the dry ingredients (sugar, cornstarch, and salt), stir in eggs and vanilla, then add the melted chocolate. This then gets poured into our flaky pie crust. The final piece of the puzzle is to mix together the chopped pecans and coconut flakes and add that on top before baking the pie in the oven.

The texture of this German chocolate pie is mouthwateringly good. You’ve got the toasted coconut and pecans, the flaky buttery pie shell, and the rich and creamy chocolate pie filling. Altogether, it’s a chocolate dessert recipe that the chocolate lover in your household is going to lose their minds over! 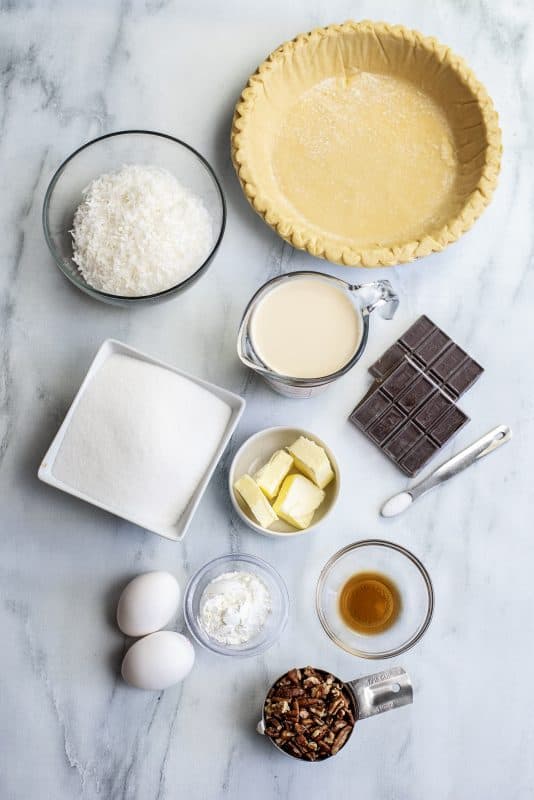 How to Make German Chocolate Pie 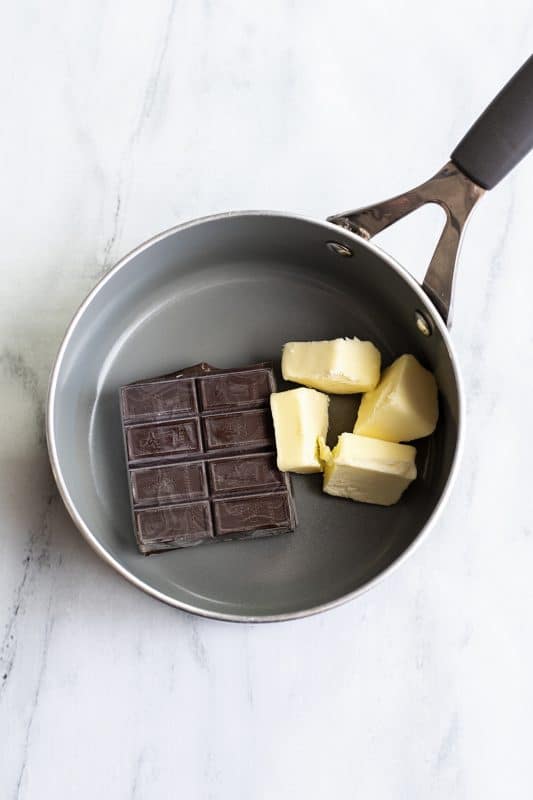 In a small saucepan (or whichever pot jumps out of the cabinet first), melt chocolate and butter over low heat, stirring constantly.

Once they are melted and well blended, remove the pot from the heat and stir in the evaporated milk. Set aside. 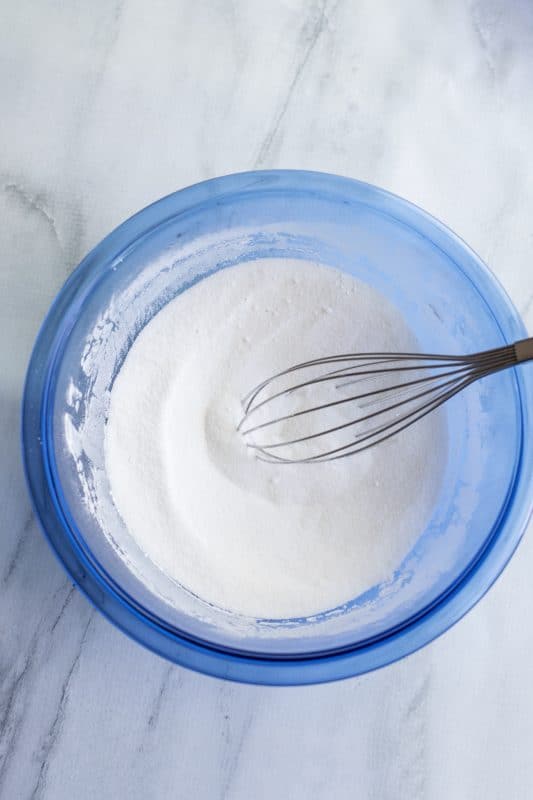 In a large bowl, combine the dry ingredients: sugar, cornstarch, and salt.

I just used a whisk because I have fifty million whisks in my kitchen. I love those things, almost as much as I love tongs. Y’all, I probably have sixty million pairs of tongs – but anytime I see a good whisk or set of tongs I still buy them! Because I am quite sure I always need just one more. 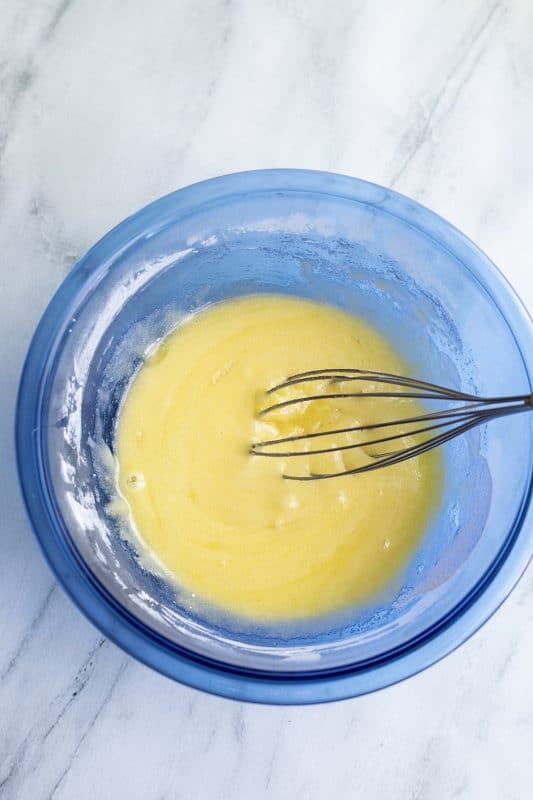 Stir in eggs and vanilla. 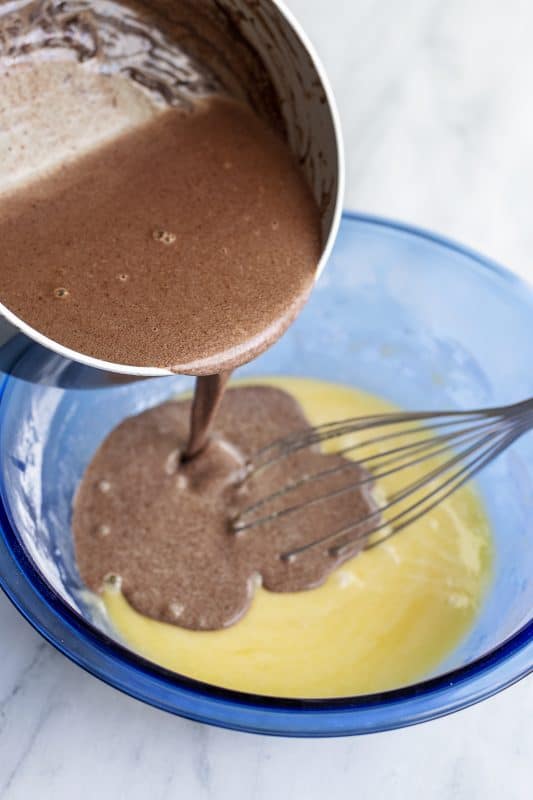 Gradually stir in the chocolate mixture. 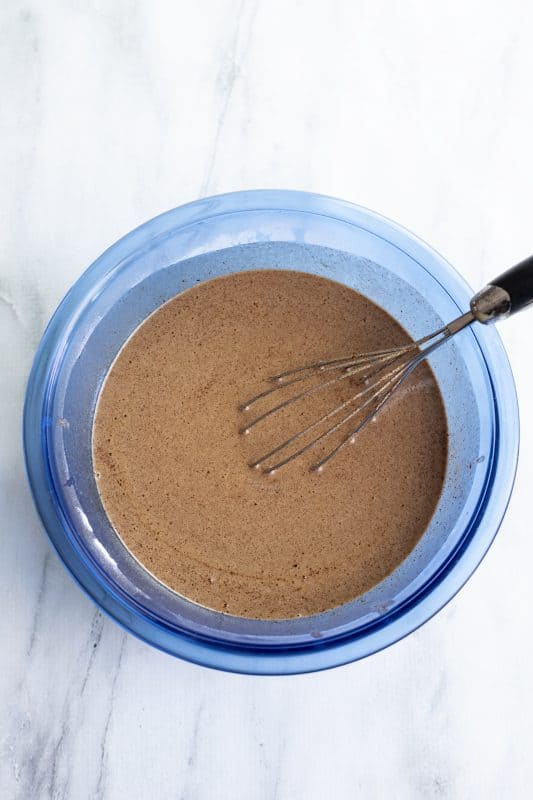 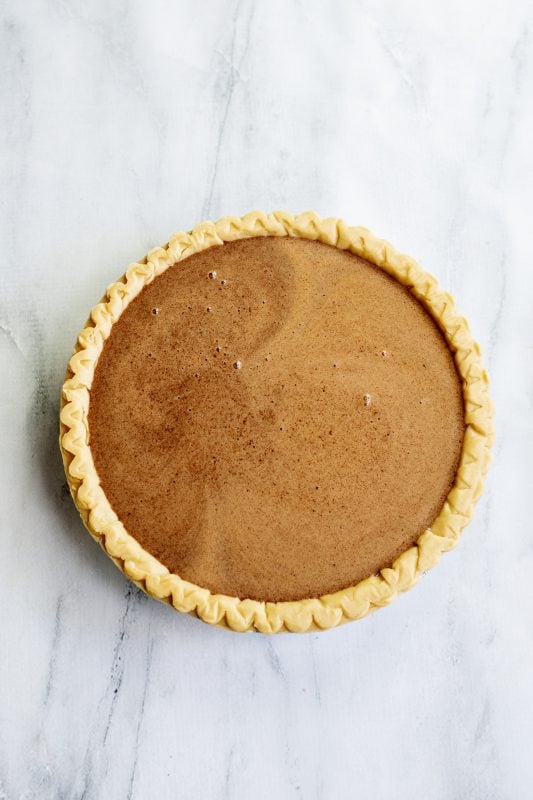 Pour this into your unbaked pie crust. 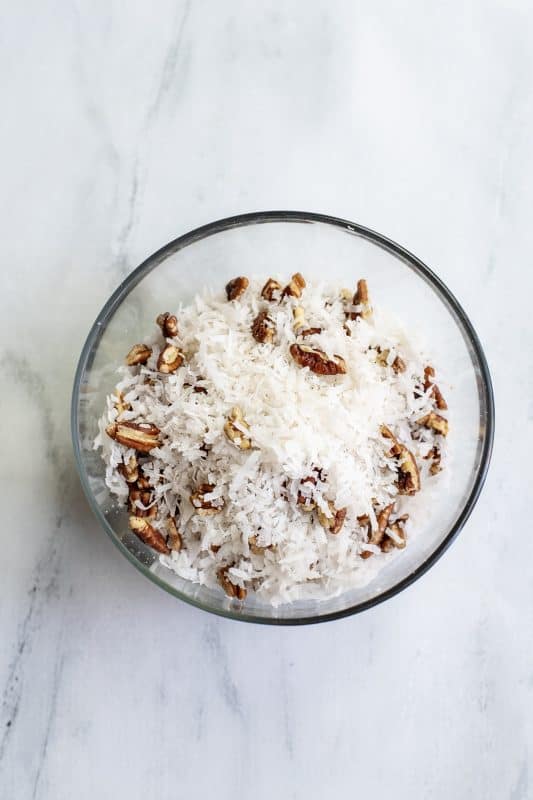 Mix your coconut and pecans together a little bit. You can just use a spoon or toss it with your fingers. 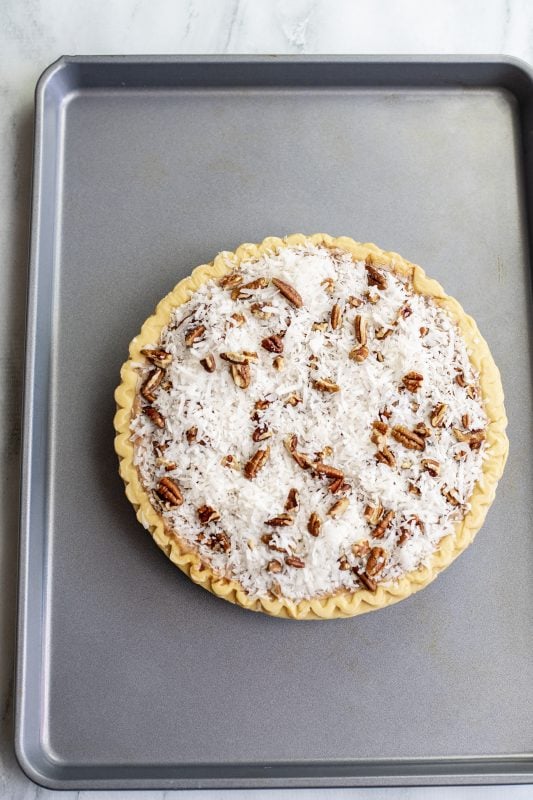 Sprinkle on top of the pie.

Bake at 375 for 45-50 minutes until puffed and brown. But check it after 30 minutes and if the coconut looks like it might burn, cover it with aluminum foil for the remainder of the cooking time. 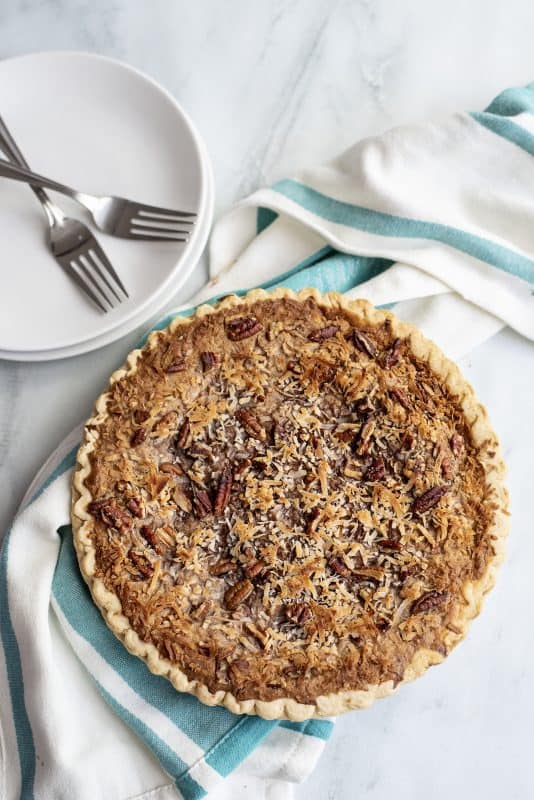 Allow the pie to cool for at least 30 minutes before serving.

Note that some have reported mandatory cooling times of over an hour (up to four hours), so see what works best for you. Personally, I’m digging in after 30 minutes!

Refrigerate any leftovers and serve reheated or cold. 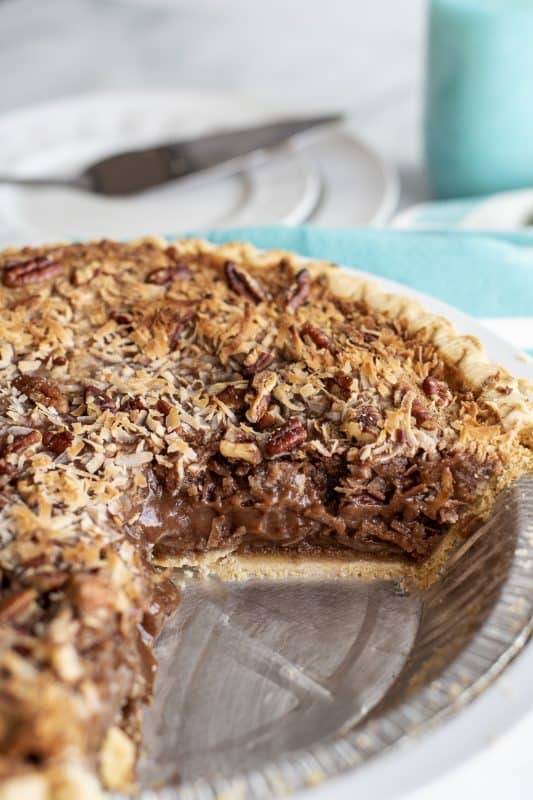 How do you serve German chocolate pie?

Serve your slice of German chocolate pie with a dollop of whipped cream (here’s my homemade recipe) or a scoop of vanilla ice cream and some chocolate shavings.

Why is it called German chocolate pie?

The first thing to know is that German chocolate pie has nothing to do with Germany. It’s named after Samuel German, who made German’s Sweet Chocolate (a dark baking chocolate) in 1852. It’s most commonly used in German chocolate cake, which is basically this pie in layer cake form. It was first prepared in the US in the 1920s but then went nationwide thanks to a Dallas newspaper in the 1950s. The pie was a spin-off and the rest, as they say, is history.

I think you’ll also like these delectable pie recipes: 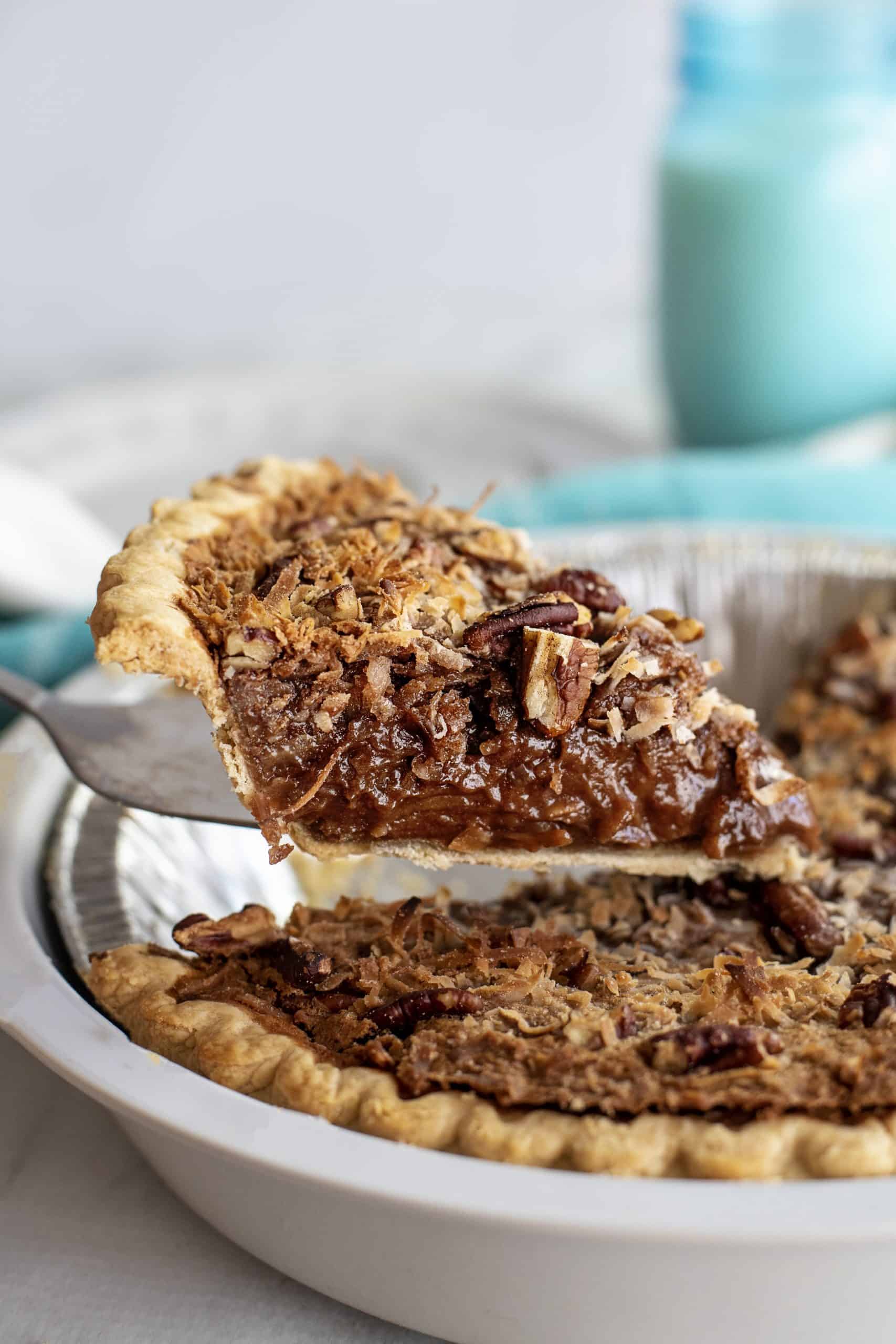 This recipe was originally published in 2013. I updated the post and photos in 2020.

“Most folks are about as happy as they make up their minds to be.”

My absolutely favorite pie. I’m making it for my birthday today

Hope you had a Happy Birthday!! So glad you love this pie 🙂

Jessica
Reply to  The SouthernPlate Staff

1 cup plus a half cup of sugar

Hi Christy, I love your recipes. I am so looking forward to making this pie. But, what I enjoy first, are your comments. You always make me smile. May God Bless You and Yours. Thank You!

I could only find a 9″pie shell. Will this work. Also how long would you cook it and what temp. Thanks