If you’re looking for comfort food, turn your attention to this easy creamy loaded potato soup. With smoked meat, cheese, cream, and potatoes, this soup is super rich and flavorful. 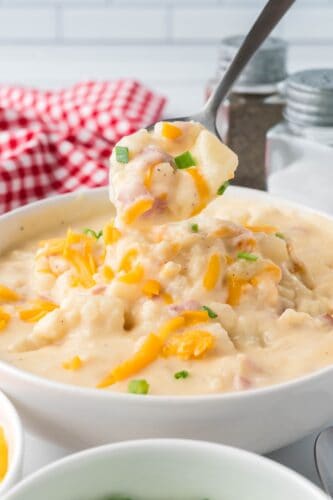 This loaded baked potato soup is going to be a hit in your household. First, it’s easy to make and ready to eat in just 40 minutes. It’s also loaded with yummy ingredients like potatoes, cheese, and smoked meat. Add in some heavy cream and you have a family-friendly meal that’s creamy, hearty, flavorful, and filling. Serve your loaded baked potato soup with some warm cornbread to soak up all the indulgent leftovers in your bowl.

Keep reading as I share lots of suggestions below on substitutions and additions to make this easy loaded potato soup recipe suit you and your family as well. 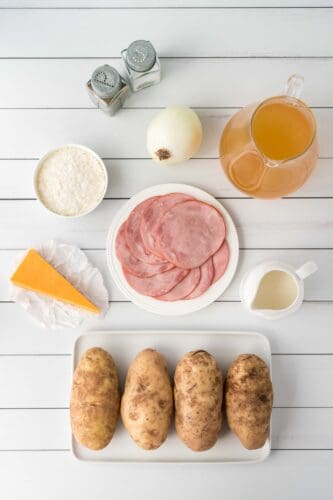 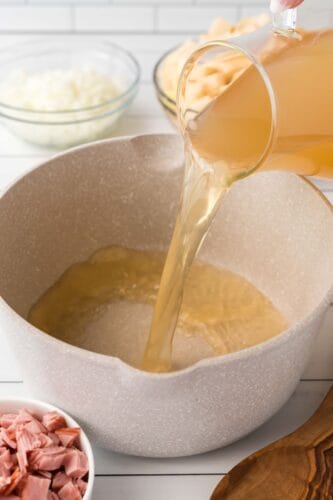 To begin with, pour your broth into your dutch oven or soup pot and put it over medium heat. 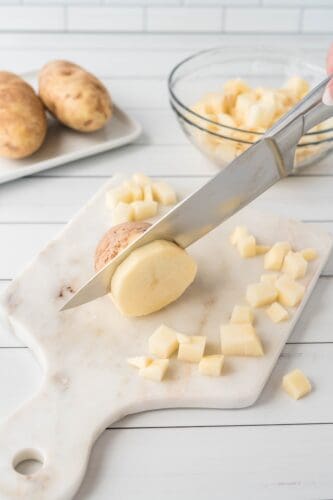 Peel and dice your potatoes. 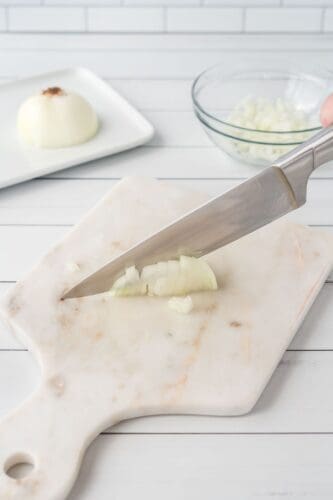 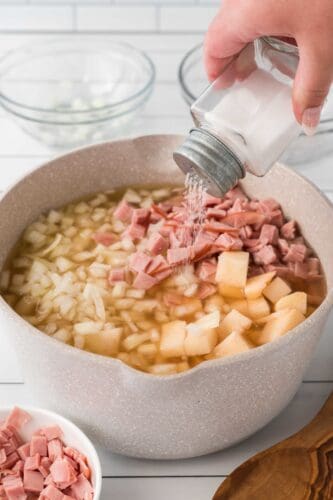 Add the vegetables and the smoked meat to your broth and season to taste with salt and pepper. However, stay on the light side because we will season it again right before serving. 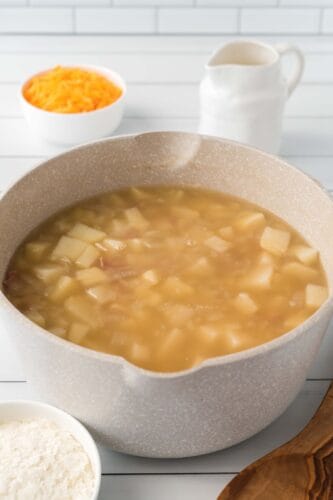 Bring that just to a boil and then reduce heat and simmer, covered, until you have tender potatoes.

This will take about 10 to 15 minutes, depending on how big your chunks of potato are. 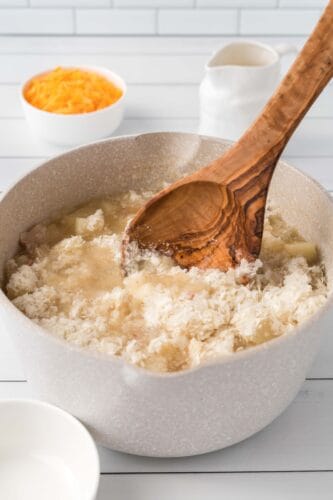 Now add in your potato flakes and stir that up.

I love instant potato flakes as thickeners for soups and stews and making the crust to my Mama’s Taco Casserole. I don’t use them for mashed potatoes though. My Grandmother’s mashed potatoes were just too good. 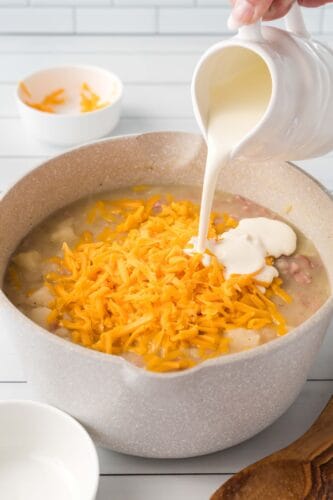 Now add in your cheese and pour in your heavy cream. 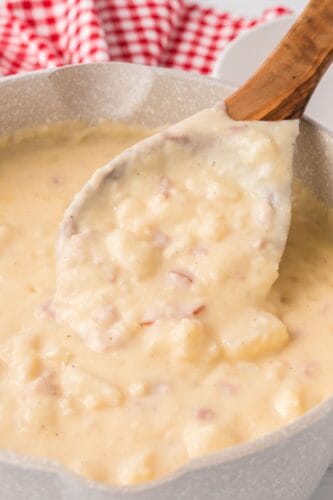 Stir that up and cook for just a few minutes until heated through. 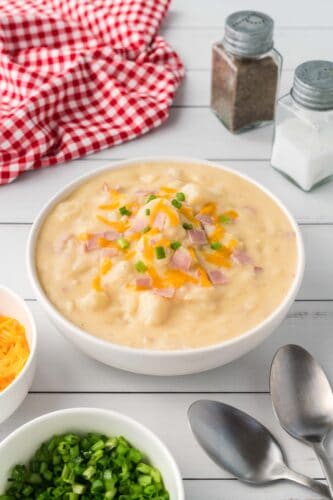 Top your loaded baked potato soup with your favorite toppings, such as:

As always, serve to someone you love, yourself included. 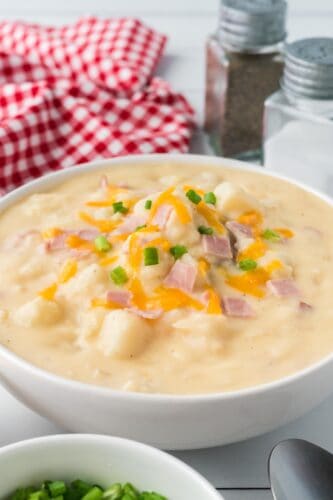 What are the best potatoes to use in soup?

I use russet, but you could also use Idaho or Yukon Gold potatoes. If you opt for the latter, you can leave the skin on.

Can I make potato soup in the slow cooker?

Yes, you can! What you’ll want to do is add all the ingredients except the cheese and cream to the slow cooker. Cook on low for 4 to 6 hours or high for 3 to 4 hours, or until the potatoes are tender. Then stir in the cream and cheese and continue cooking in the slow cooker for an additional 20 to 30 minutes.

Greek Potatoes With A Twist 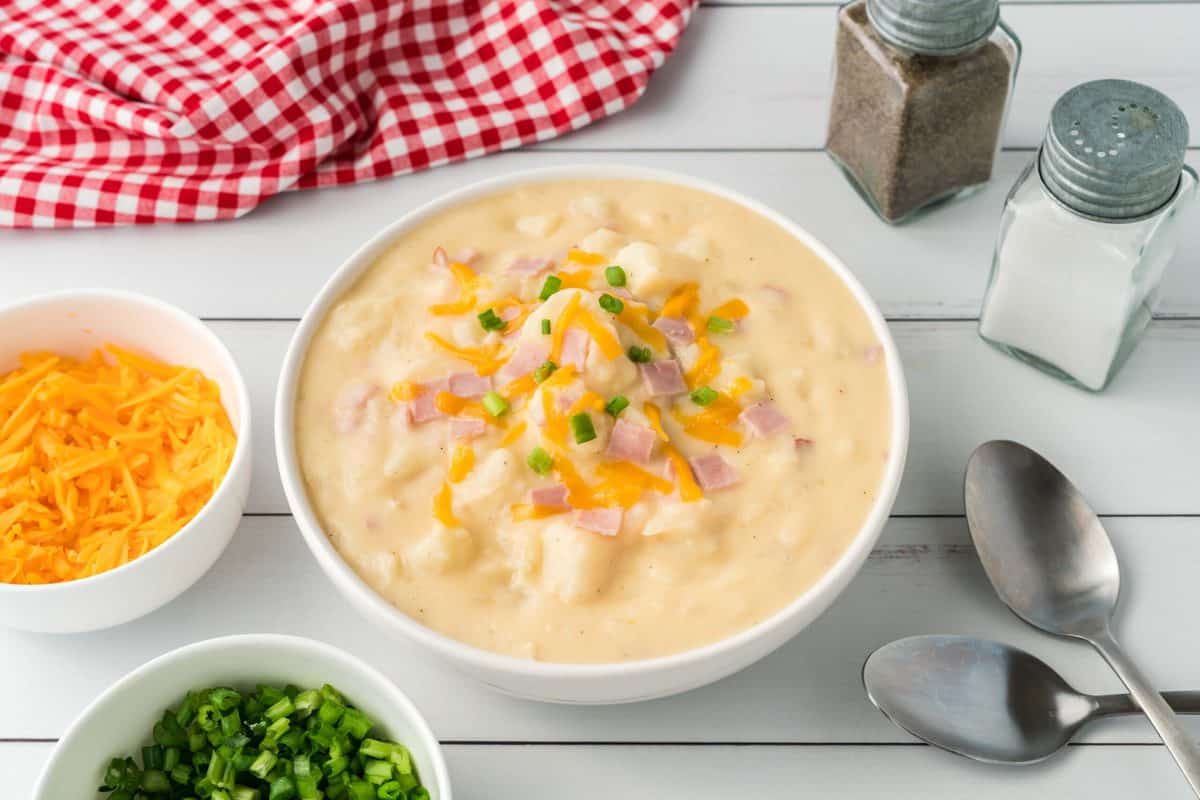 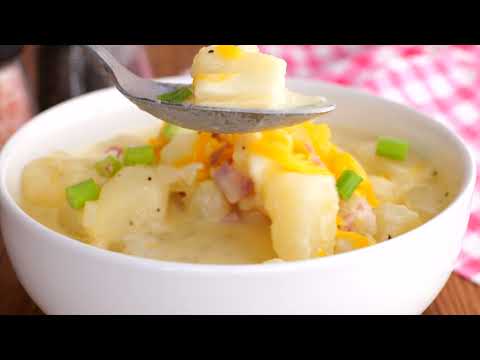 “People don’t care what you know until they know that you care.”

This is from one of our readers. Thank you Sherri!

I live near HOTlanta and I’ve been wanting to make a big pot of chili for a week now. I may just make potato cheese soup instead! I think I’m just ready for the crispness of Autumn to “fall” on us. I can’t wait to fill our home with the scents of canning applebutter and applesauce. Come on October!

Amen! My husband’s family is just outside of Hotlanta, we hope to get to visit them soon, but don’t expect a heat reprieve when we do! lol I’m with you, lets cheer for October!

Me, too! We’re in the teaming metropolis of Douglasville!

Great minds think alike :-)) I’m in a Fall mood today, too. I love potato soup (thanks for the recipe, it looks delicious!)….but today I’m making my Pork and Chilis, something I usually reserve for Fall weather. It is still in the 100+ temps here in East Texas, but the leaves are falling from lack of rain…so does that count as “Fall” …hehehe…also, I’m glistening from the 100+ degrees :-))

God bless ya’ll, and hope you have a great day.

Bless you too, Rose! You always make the day better for anyone who encounters you!

awww…thank you 🙂 and the same goes for you, too. I don’t know what we would do without our Christy. We love ya!!

I know the feeling Rose I am in South Texas and it is so HOT and dry—–can’t wait to make this soup, when it cools down some..

Oh Vickie, it’s horrible, isn’t it. Seems like Texas is going to burn up.

Rose, if you don’t mind, where in East Texas. I live in Tennessee now but was born in Atlanta, Texas and raised in Southwest Arkansas area. I have family there and they said it has been HOT there all summer.

We’re in the 22nd day of three digit temps here in the Houston area. Don’t mention hot soup around here!

Betty,
I live south of Atlanta, in a little town named Kennard. It’s close to Lufkin and Nacogdoches. It has been terribly hot and dry. We are all praying for rain.

I always use red potatoes with skins still on in my potato soup. I only eat red potatoes though 🙂
Also, I add an 8oz container of French Onion Dip to it and it gives it an extra flavor. I’m always told That everyone loves my soup. Give it a try!

I love this recipe! I love potatoe soup, can’t wait to make this, but I usually don’t start making soups until it gets cool enough to turn off the AC. I love making a stew that just simmers on the stove for a couple of hours. It warms the house and smells so delish!

You just made my heart long for fall even more! lol

Cool night in Mi last night, so making beef barley and mushroom soup today 🙂 Thanks for the potato soup recipe!!

You are so welcome! cool night last night? You lucky dog! lol

Lisa, I’d love to see the beef barley soup if you’d be interested in sharing it! It sounds delicious! -Eve

Fall can’t seem to get here quick enough for some reason. I’ve already made several fall flower arrangements, and a wreath for our door. I just have to wait until it gets here to put them out. I’m ready for sweaters and cool air.

This soup looks yummy. Potato soup is probably my favorite, especially when it gets cooler outside ( I tend to get too glistened if I eat it when it’s warm out, hehe). Sounds like a good idea for supper! Maybe with homemade rolls. yum!

OHHH!!! If you’re on our FB page (and I think you are) I’d love to see photos of your flower arrangements!!

There is almost nothing as good as a nice hot bowl of potatoes soup on a cold day!
We always top it with Crispy Bacon (not bacon bits) and some extra cheese!
Thanks for another great recipe!

Opps i never said i could spell….
hot bowl of potatoe soup

You know, there isn’t much bacon doesn’t improve, is there? lol
Gratefully,
Christy 🙂