A shortcut version of this recipe may be found here. 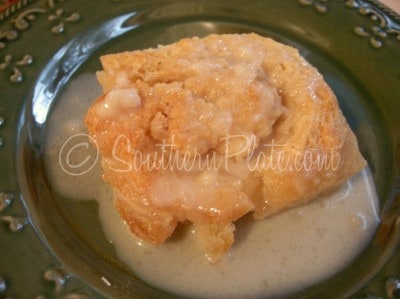 One of the things I enjoy doing above all others on Southern plate is taking those lost and nearly-lost recipes of days gone by and posting them in hopes of bringing them back from the brink of extinction. This is especially important to me in preserving our food heritage because our most cherished recipes were never written down, instead passed from cook to cook by showing them along with instructions like “you take a little bit of this and little bit of that”.

Well of course, that hardly works nowadays when cooks are thousands of miles apart or perhaps precious Granny has passed on and taken the recipe with her. I don’t even know if my great grandmother ever followed a single written recipe in her life, I’d be surprised if she ever did. She didn’t get to go too far in school and I know that writing a recipe would have been a difficult task to attend to for her. Instead, it was a bit of this and a bit of that, humming along as she took whatever she had in the pantry and whipped up a little supper.

Some of our most beloved dishes begin with flour. Biscuits, milk gravy, chicken and dumplings, and today’s recipe: Butter Rolls. I wish I could say I’d grown up eating butter rolls but the truth is I had this dessert for the first time about ten years ago. We were having supper over at Grandmama’s house (her slow cooked pork roast) and as soon as we walked in the door I honed in on an indescribably delicious smell wafting at me from her oven. “Grandmama, what is that?”

“Oh, I just made us some butter rolls for dessert”. She said it with a wave of her hand, dismissing it as nothing special.

I was confused. Rolls for dessert? I thought she had taken rolls and slathered them with butter and was heating them up in the oven. It smelled so different though, vanilla and sweetness and butter. I hardly ate any supper waiting on them. As soon as she pulled the pan out of the oven I was beside her helping – you know, in case she forgot to get me one out first! I stuck my fork into it and was hooked. “Grandmma, you have GOT to get me this recipe”

For five years, I had no idea how to make a butter roll.

Everytime I asked Grandmama she’d just make them again for me, but they were always in the oven by the time I showed up at her house, baking. I would say “Grandmama, you have got to give me that recipe” and off she’d go again into her “t’ain’t really no recipe, you just take a little bit of…”

Finally, Mama and I hit pay dirt when Mama found a few recipes for butter roll in some brittle church cookbooks. We tried them out and this one was the winner – just like Grandmamas. After having made it according to the recipe, I can now understand Grandmama’s instructions fully – it really is that simple. But I think y’all are going to need a recipe just like me in order to get you started. After you give this a go, feel free to use your favorite biscuit dough or even experiment with canned biscuits. It’s really easy and fuss free.

By the way, like so many of my other dessert recipes on southern plate, you can use splenda in this one. Just remember that the key to cutting down on the artificially sweetened taste is to use just a hair less than the recipe calls for (remove one or two tablespoons per cup) and be sure you don’t pack it. Splenda should be measured out light and fluffy.

Still wondering just what a butter roll is? Think more in line with cinnamon rolls, only without so much cinnamon and baked in a rich homemade custard sauce- that stays just runny enough to be considered kind of a custard gravy of sorts. Oh Lawd, you need to make these. I have a favor to ask as well, since this is a nearly forgotten recipe of days gone by, help me bring it back again so it won’t be lost to future generations. If you enjoy it, please pass the recipe on.

I’ll send out a printer friendly version of it later this week to my email subscribers to make that a little easier! 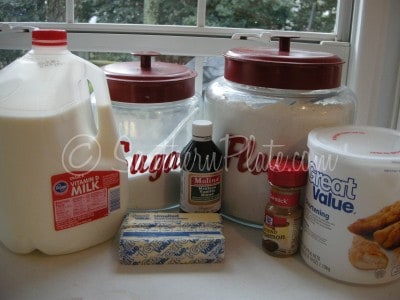 There are two sticks of butter pictured here but you only need one. They were friends and hated to be separated just yet.

Eventually I promise I’m going to get around to doing a tutorial on my canisters… I made them myself but I don’t know where you can get the letters because I had a friend do those up for me so that is what I’m hesitant about because I can’t bring you A.B.C. steps to having canisters just like mine, I can only bring you A. and B. 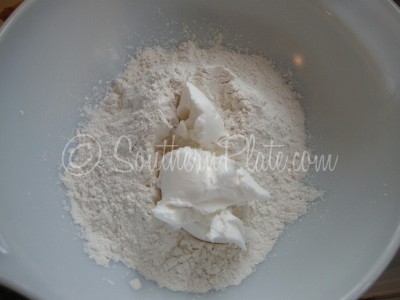 Place your flour in a large mixing bowl along with shortening. 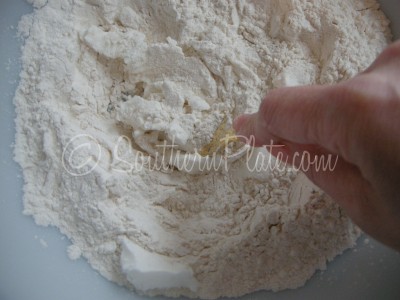 Cut shortening in with fork… 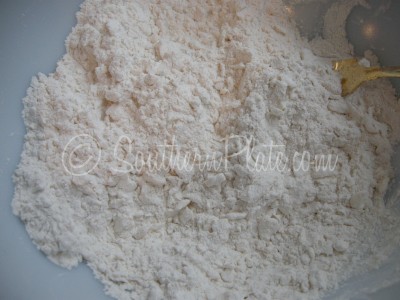 I use a lot of both plain and self rising flour at my house and have been known to dump whatever I grabbed first into my flour canister when it got empty. Sometimes I lose track of what is in there and need to know if it’s plain or self rising. There is an easy fix. Dip your finger into the flour and lick it. If it tastes salty, it is self rising. If it tastes bland, it is plain. I have to do this at least once a week but I’m perfectly alright with that because I decided long ago that being disorganized was just part of my charm. ~grins~ 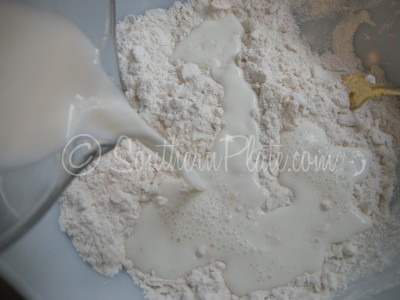 Pour in your milk. 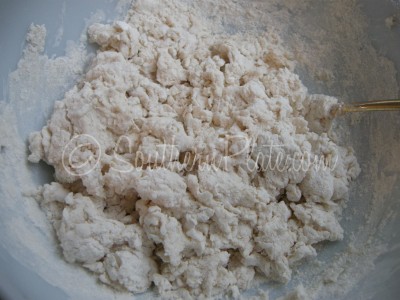 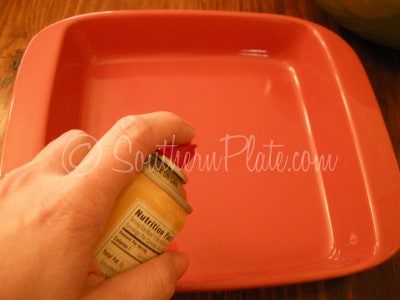 You don’t have to do this but I was in the mood. 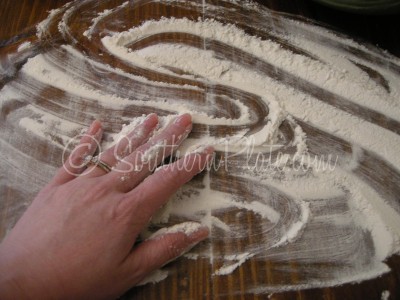 Put you some flour on a clean counter top or wherever you feel like doing this.

I’m using my kitchen island that I love so much that the nice man in Tennessee made me. 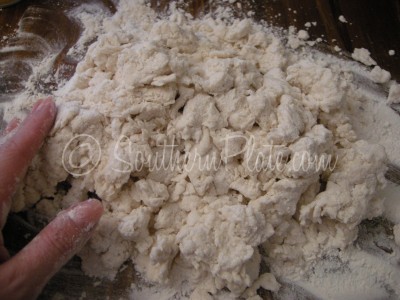 You can use whatever biscuit dough is your favorite or just go by this recipe. This one is gonna hold up a little better in our sauce cause it’s a little dryer. 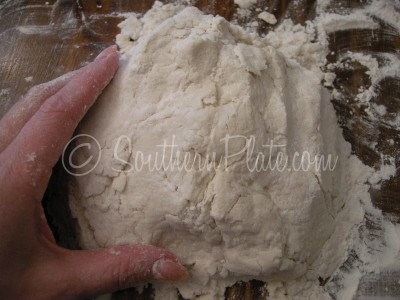 Press it together to form a ball. 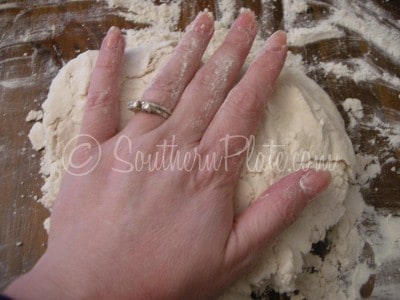 Then pat  it out with your hands a bit 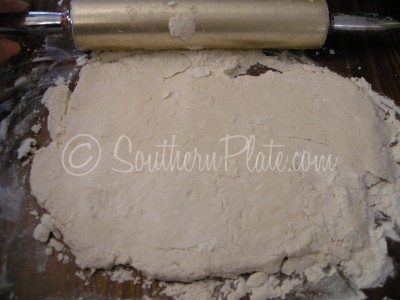 Roll it out into a rectangle type object.

Notice I didn’t get too particular here. This is an old fashioned dessert and I figure Granny was busy with kids underfoot and hungry folks marching in the door.

Back in those days folks cooked their food, not built a shrine to it.

I imagine if I were to go back in time and show up in her kitchen and say “Wait, Lela! Let me get a picture…oh can you make it a little prettier first?” I’da probably ended up with a big wad of dough thrown right at my head – and rightfully so. 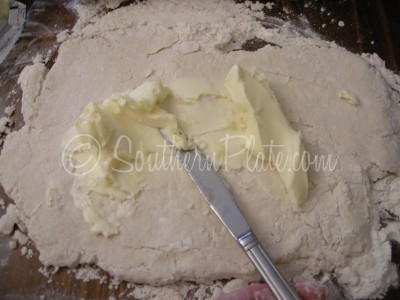 Now we’re gonna smear our butter on the rolled out biscuit dough. 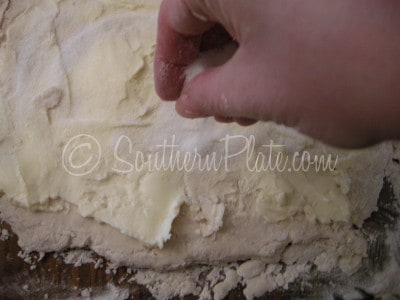 and generously sprinkle all of our sugar over it. 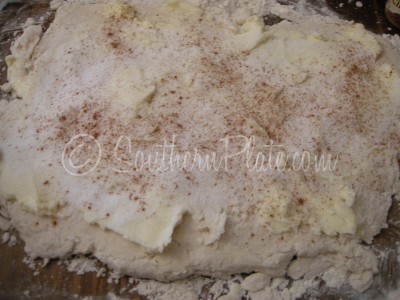 Then comes the cinnamon, just a hint.

The dough and sauce mixed together  with the butter and vanilla are going to have the most lovely flavor on their own! 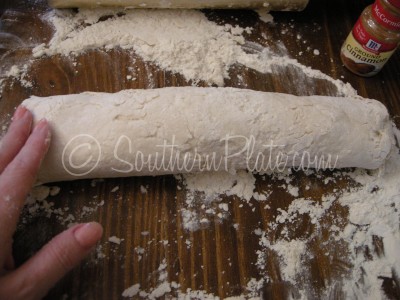 Now roll that up. 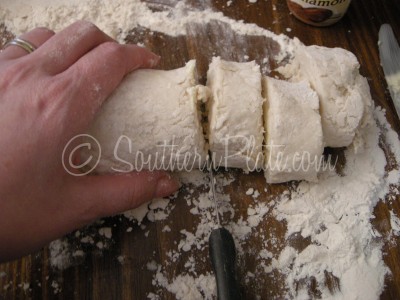 Cut it in about one inch slices (one inch-ish).

Remember, this is old fashioned food. It’s not supposed to look a certain way, it’s just supposed to taste good. 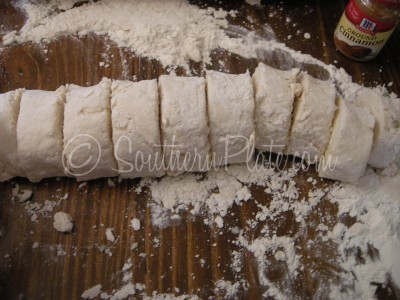 All sliced up and ready for the party in my baking pan! 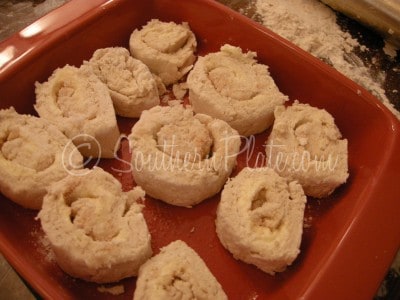 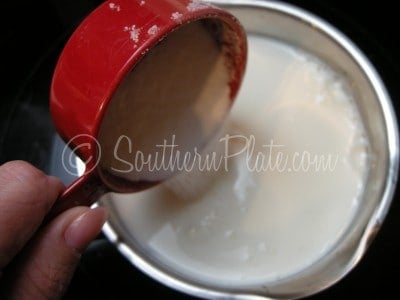 In a saucepan, pour milk and sugar. 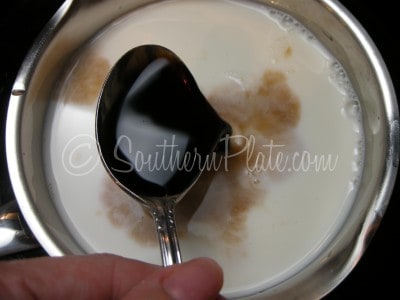 Stir that over low to medium heat until the milk is hot and the sugar is dissolved.

(that’s supposed to be a teaspoon of vanilla there, I’m generous ~giggle~) 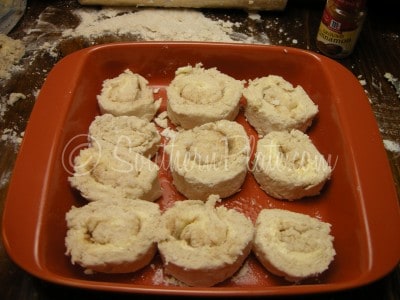 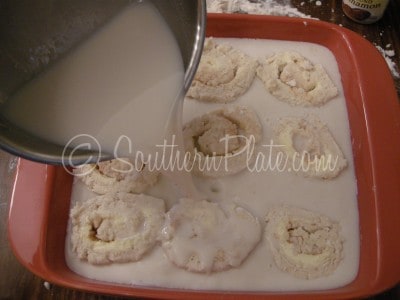 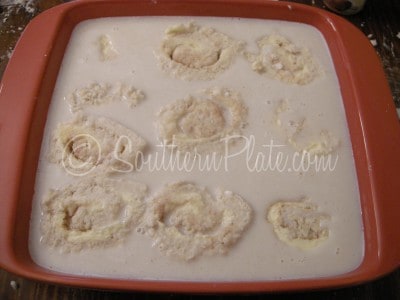 I hope you’ve tasted the sauce by now.

If you haven’t go ahead, I won’t look. ~covers eyes and grins~ 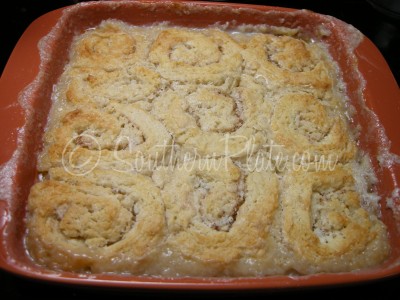 Bake at 350 for about thirty to forty minutes, until lightly browned on top. 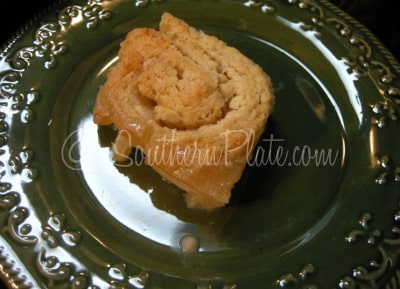 Place rolls on plates to serve and… 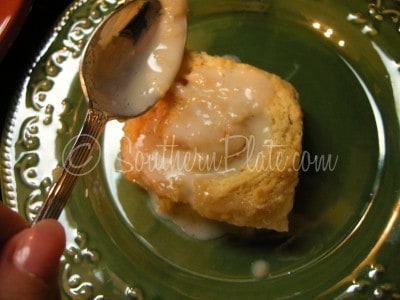 Spoon more sauce on them. Enjoy real old fashioned goodness, from Granny’s kitchen to yours. 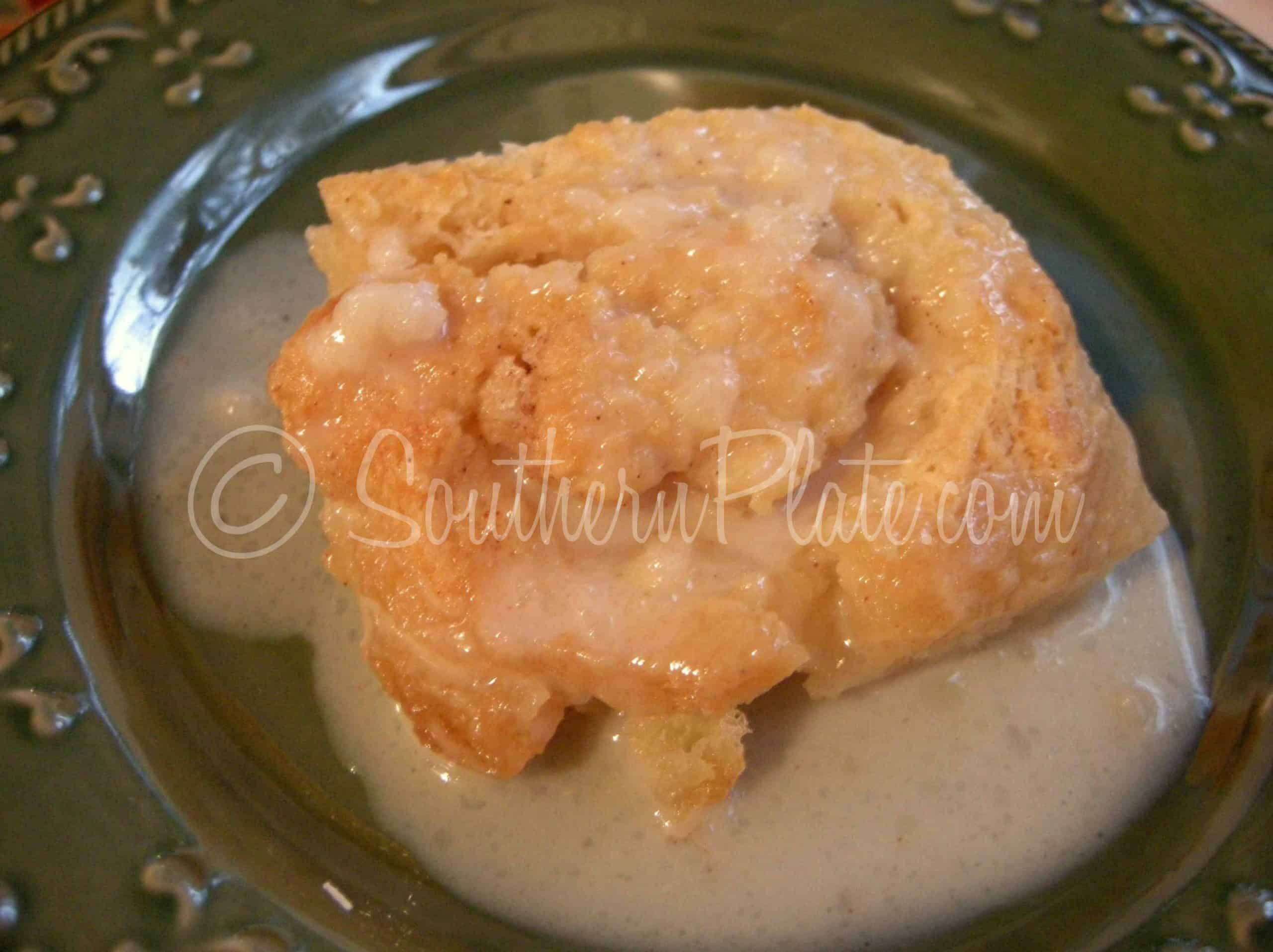 For the Butter Rolls

For the Milk Sauce

At the end of a matter ask,

“What will I learn from this to make me better?”