This old-fashioned homemade chocolate pudding recipe is a delicious version of banana pudding, a Southern favorite. You still get to enjoy the sweet vanilla wafer layers and the toasted fluffy meringue on top, but it includes a rich chocolate custard pudding instead. 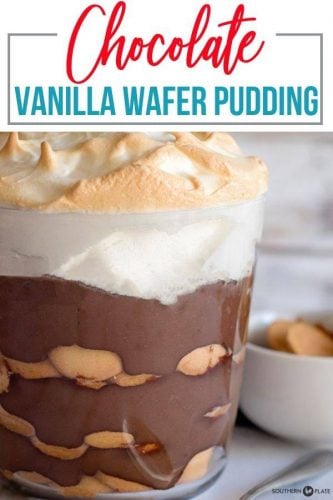 Devotees of our beloved banana pudding were likely raised having this homemade chocolate pudding version as well. Although the bananas are absent, the homemade chocolate custard, layered with vanilla wafers, and topped with a fluffy meringue is an old-fashioned Southern dessert we all love and adore just as much as its cousin. This recipe was included in my third cookbook, Sweetness: Southern Recipes to Celebrate The Warmth, The Love, and The Blessings Of A Full Life.

The simple list of ingredients is also very similar to what you’d find in banana pudding, including milk, eggs, flour, and sugar (no instant pudding around here). The only major difference is we don’t have fresh-cut banana slices, but we do have the best homemade chocolate pudding ever made from scratch (a very worthy trade in my opinion). Plus, this is a homemade chocolate pudding recipe without cornstarch, which I know will definitely pique some people’s interest. 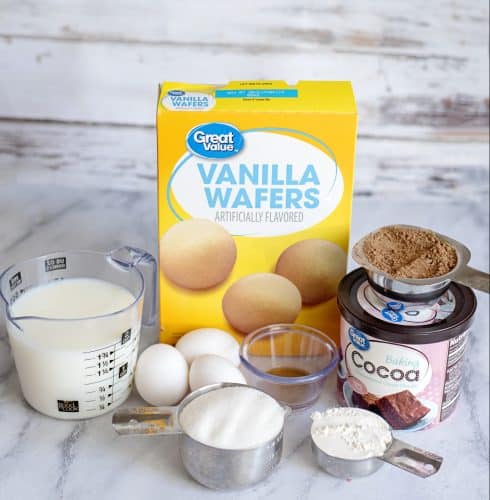 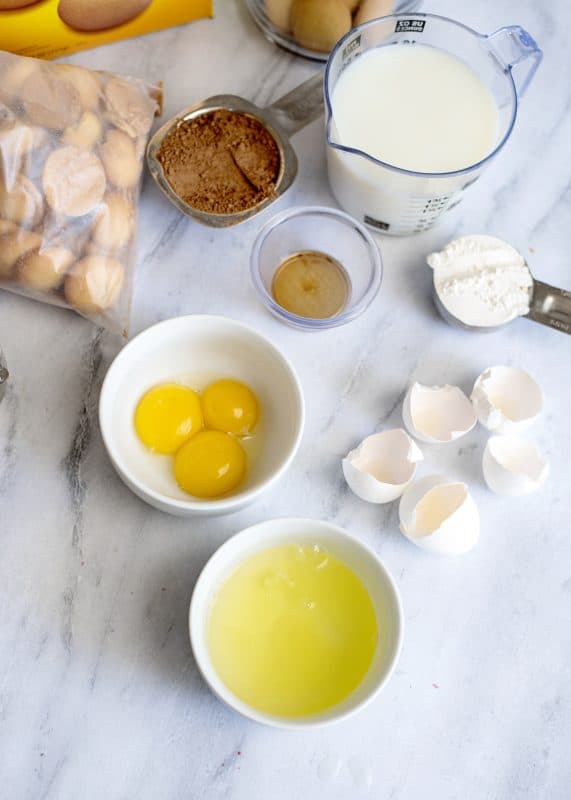 Begin by separating your eggs, yolks from whites.

Be careful not to let any yolk get into the whites because if you decide you want a meringue on this, they won’t beat up as you’d like if they have any yolk in them. No pressure or anything. I mean, it’s not like your life would be a failure, just your meringue. Let’s keep it in perspective here... 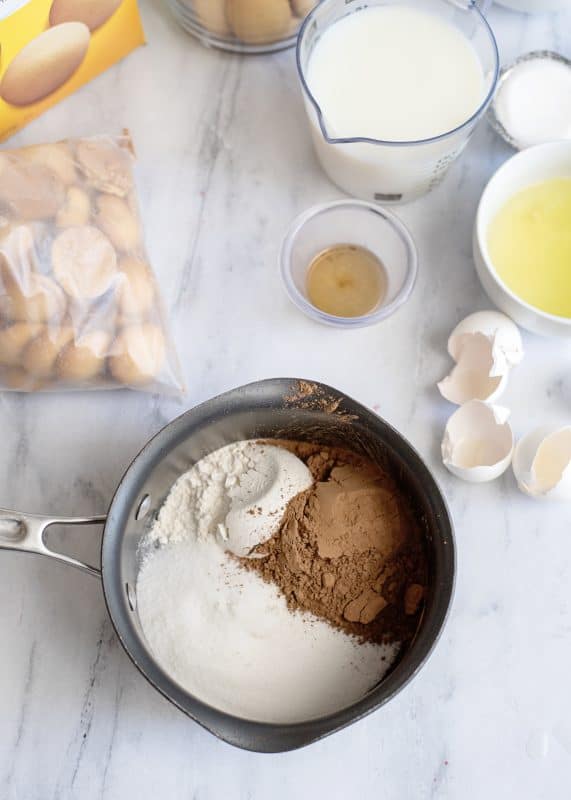 Place your sugar, flour, and cocoa powder in a medium saucepan.

You’re not going to use all of the sugar here, some is reserved for the meringue. Make sure you follow the recipe card at the bottom. 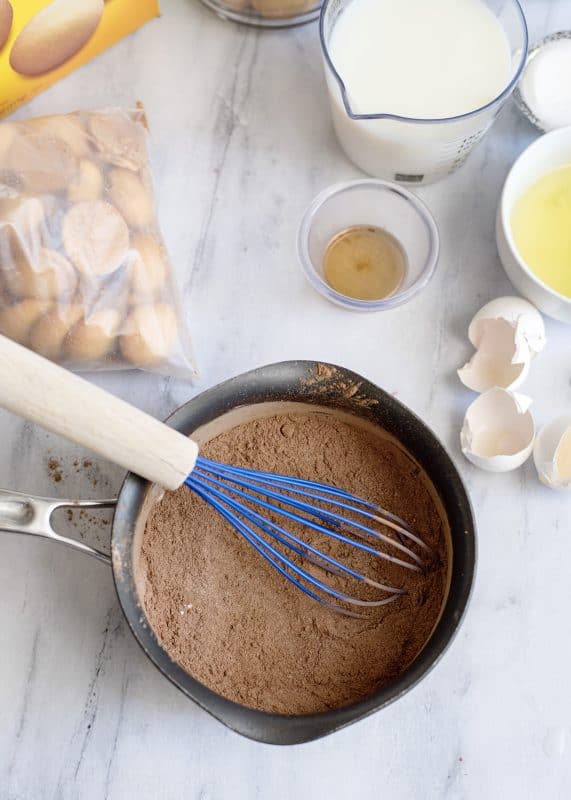 I stir my dry ingredients up a bit to combine them some. 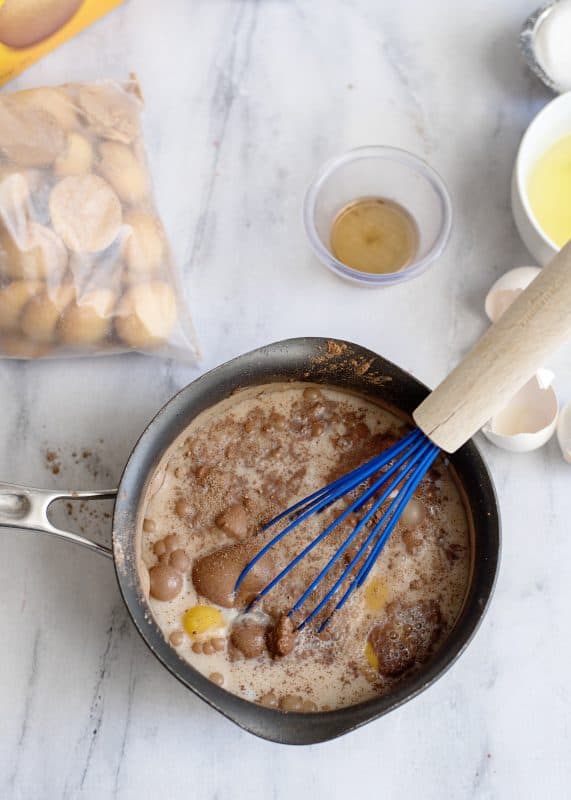 Add milk and egg yolks to chocolate pudding ingredients and stir some more. 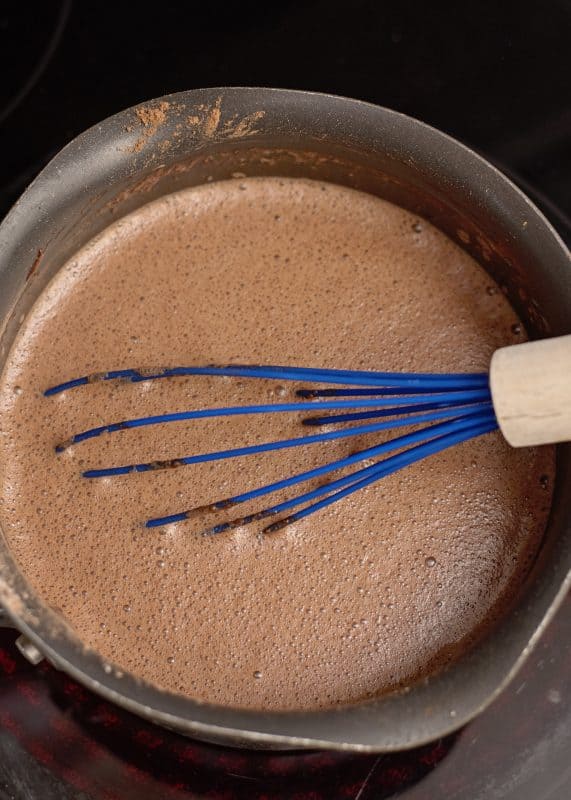 Place this chocolate pudding mix over medium heat and stir constantly until thickened, about 10-15 minutes. Now y’all, when I say you need to stir constantly, I’m not kidding. The pudding can easily scorch but if you stir you’ll be fine.

Folks used to always use double broilers for this but as long as you have a nice thick saucepan, this works perfectly. I haven’t used a double boiler since my college culinary classes and even then we only used it once and then we learned how to live happily without it. 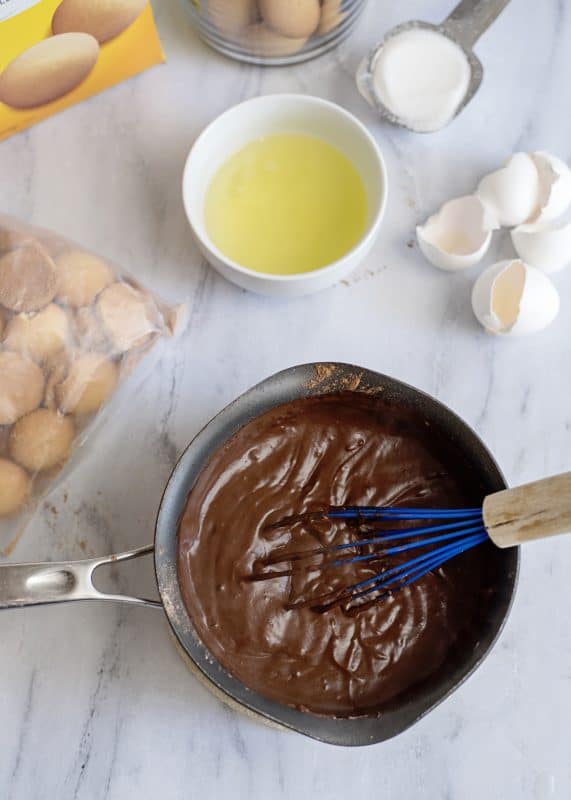 Here is our thickened pudding mixture. As soon as it thickens, stir in the vanilla flavoring and remove it from the heat. 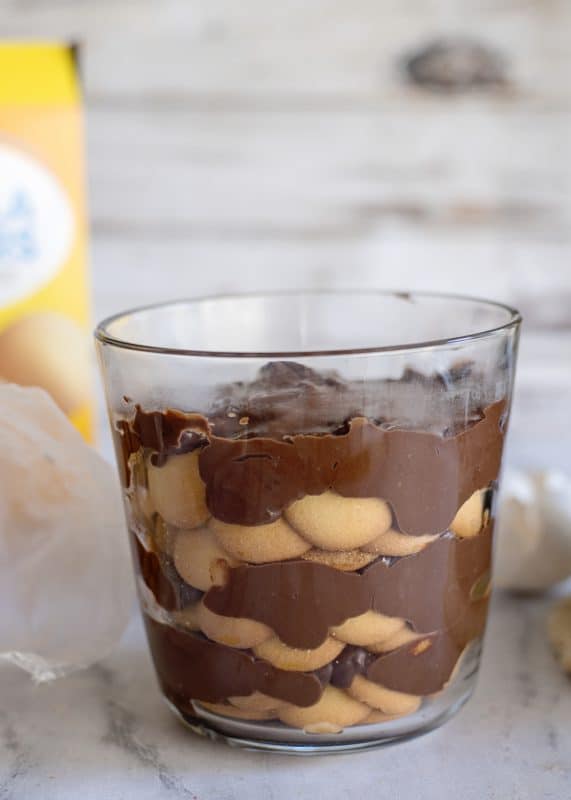 Layer your vanilla wafers in an oven-safe bowl or dish. I tend to use a bowl but I’ve seen lots of people use a 9×13 baking dish.

How to Make the Pudding’s Meringue Topping 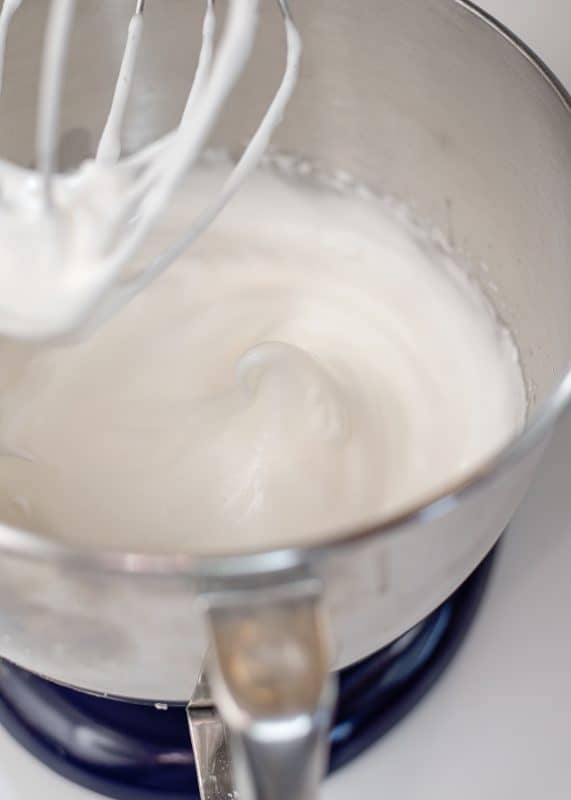 If you want to top it with meringue, put your egg whites in a clean mixing bowl and beat ’em until they get foamy. Then add your sugar and beat again until stiff peaks form. 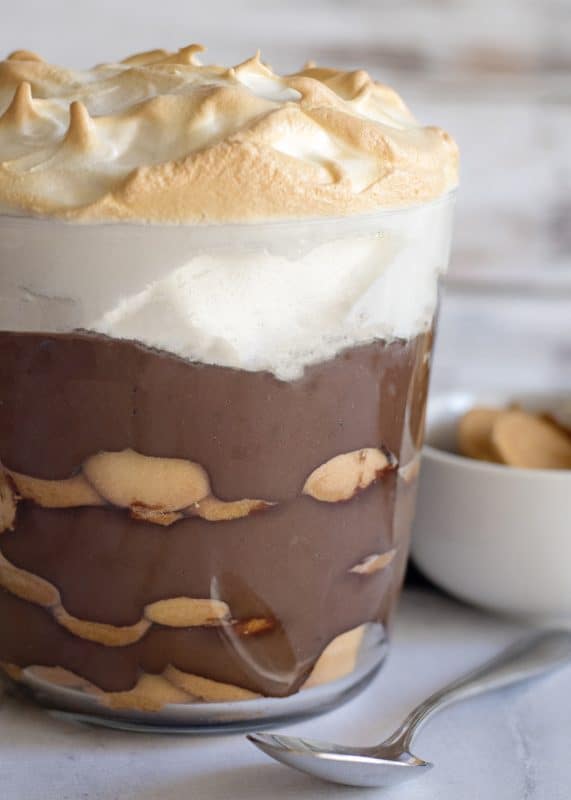 Top with meringue and place this in a 325 oven for about 10-15 minutes, or until the meringue is golden brown on top.

I love a meringue on top of pudding or pies but my mother hates it. She calls it calf slobber. It’s all good though. We honor each other’s weirdness.

When stored in an airtight container in the fridge, homemade pudding leftovers will last for up to 3 days. Serve cold or quickly reheat in the microwave.

Can I make my chocolate pudding ahead of time?

Yes, you can make this chocolate pudding recipe in advance, as it lasts up to 3 days in the fridge. However, I would assemble the pudding and wafer layers first and then make the meringue topping before serving, to ensure it’s fluffy and warm.

Here are more of my favorite chocolate desserts: 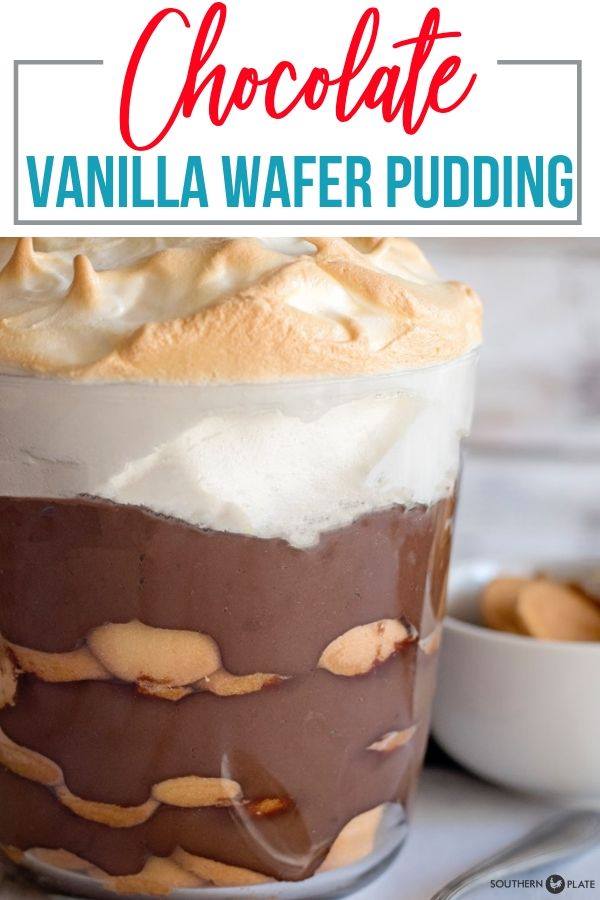 If you want to top with meringue 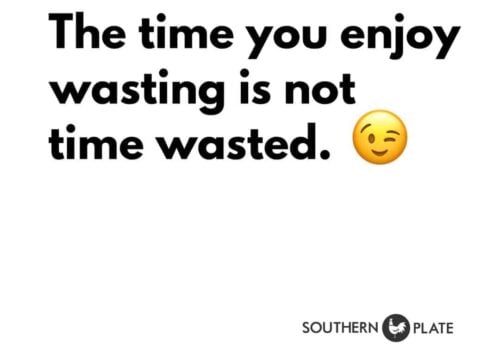 See all of my quote pictures by clicking here. This post is featured on Meal Plan Monday and Weekend Potluck.

I’m from middle Tennessee. My Dad also used the term ‘calf slobber’ but not for meringue. He used it for whipped cream which he liked. Since he grew up on a farm and milked cows, I assumed he had seen calves who had nursed and had some slobber from that coming out of their mouths. It seems more appropriate for a calf’s slobber to be from milk instead of eggs, but who knows how these old sayings evolve!
I could not find this recipe in your Sweetness cookbook but there is a similar one for Pineapple Vanilla Wafer Pudding.
This recipe for Chocolate Vanilla Wafer Pudding is on the front cover of the magazine put out by Taste of the South’s special collection issue featuring recipes just from you called Southern Plate Classics. It shows this chocolate pudding recipe in a 1 1/2 quart baking dish which I will use because I don’t have a truffle dish that is oven proof.

This recipe is NOT in my copy of your book “Sweetness”! I’m SO glad I saw it because I also never liked the bananas in the pudding! AND I love chocolate so I can’t wait to try this! Thank you for ALL your wonderful recipes and stay healthy during these trying times!

There’s a restaurant in my hometown that had this on the menu was I was young. I believe they still do. I always loved it.

Could you use a sugar substitute in pudding? I don’t imagine you could for the meringue. It probably wouldn’t brown right because there would be no sugar to caramelize.

I never saw ” calf slobber” in print before. That’s what my Daddy called foamy cake icing and meringue. He was a wonderfully loving and gentle man, the best father I have ever known any blessed daughter to have. Thank you for that little reminder.

From what I have heard in my family it was a common term used years ago. So glad it was able to bring back a precious memory and I hope you have a blessed day!!

I am excited to try this recipe. I love chocolate and vanilla wafers. I am not good at taking me time. I used to stay up late to read and now I just fall asleep. I know you are supposed to rest on the Sabbath, but I try to catch up instead.

I think the majority of people are the same way Kim, I hope you get a chance to try the Chocolate Vanilla Wafer Pudding soon!!

My Mother made pineapple pudding sometimes instead of banana. Love it better than banana.

Oh my goodness, we love Pineapple pudding too!! Come to think of it, I guess we love all kinds of pudding 🙂

I like to make things using my embroidery machine. I also I like to read. Great recipe Christy!

Thank you Phyl, I hope you get the chance to try it soon!!