Travel back in time with this old-fashioned rhubarb crisp recipe. Its buttery oat topping perfectly complements the enticingly sweet yet tangy rhubarb filling and it tastes even better served with a scoop of vanilla ice cream. 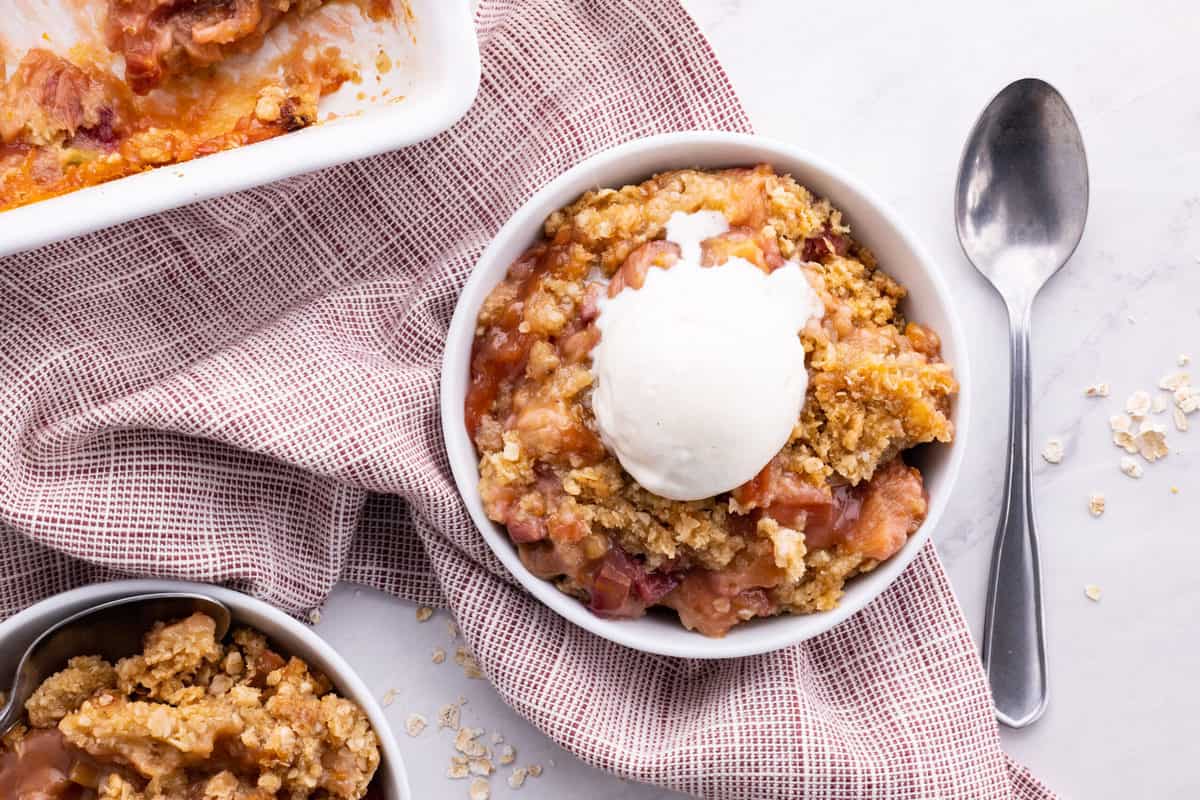 While I’m all about the apple cobbler in fall, this easy rhubarb crisp recipe is my spring and early summertime favorite. However, rhubarb seems to be one of those foods that divide people – you either love it or hate it. I’m firmly in the love camp! But where does the old-fashioned part of this rhubarb crisp recipe come from? Well, rhubarb desserts like crisps, crumbles, and pies have been a popular dish in the south for centuries.

While a rhubarb pie is actually a traditional part of New England cuisine, it’s also a popular dessert choice for those in the Great Plains region (stretching from the central US to western Canada). The rhubarb plant loves cold weather.

Like most classic rhubarb crisp recipes, this one includes quite a bit of sugar to counterbalance the tartness of the rhubarb. But it’s a simple and easy dessert option using many staple ingredients probably sitting in your pantry or fridge right now. 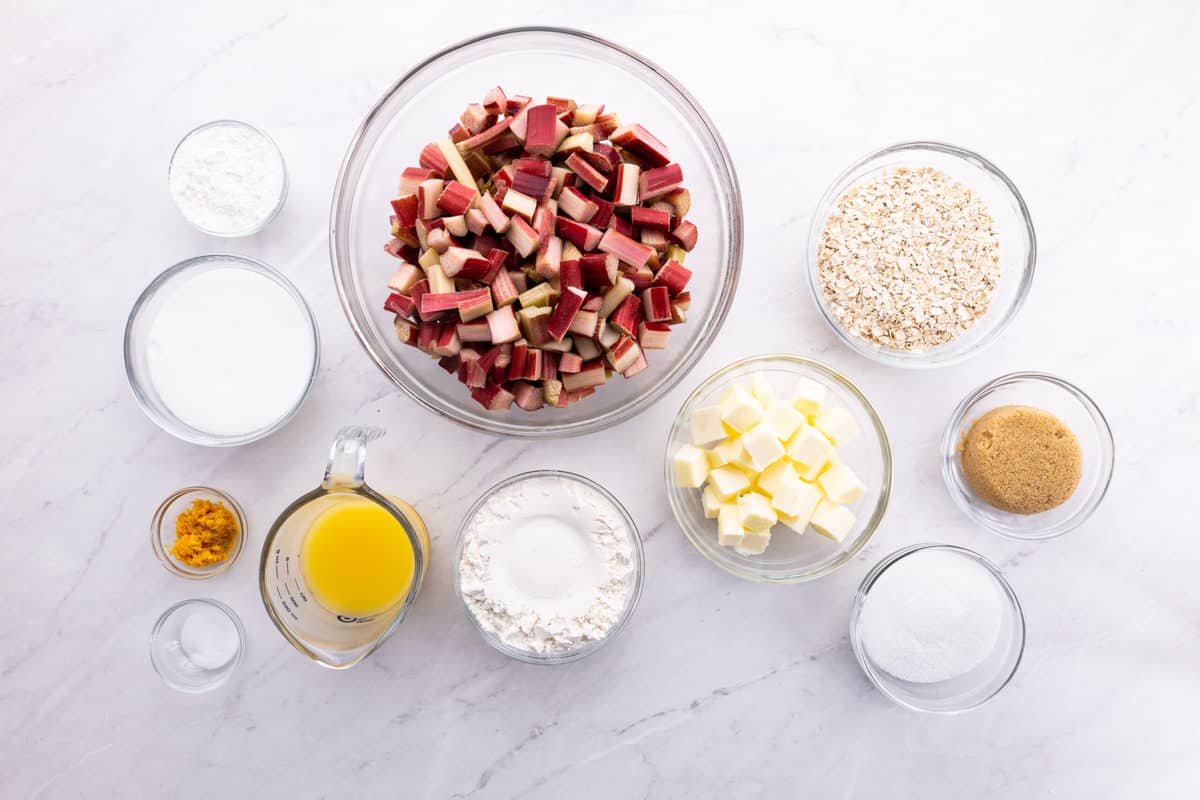 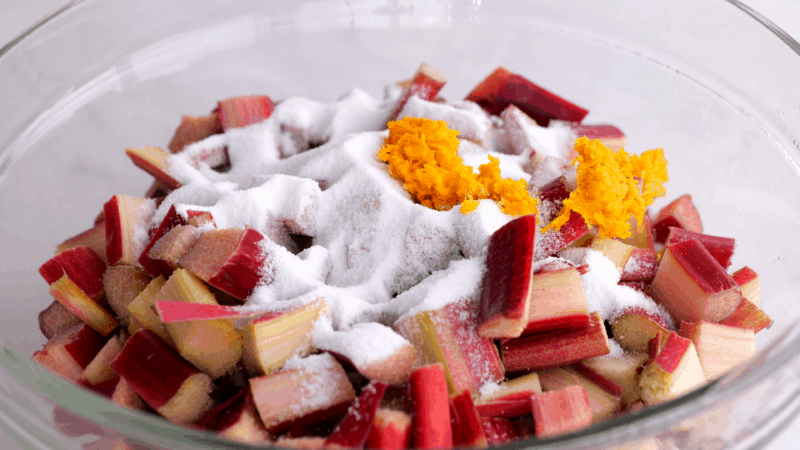 Next, toss the rhubarb, granulated sugar, and orange zest in a large mixing bowl. Set aside. 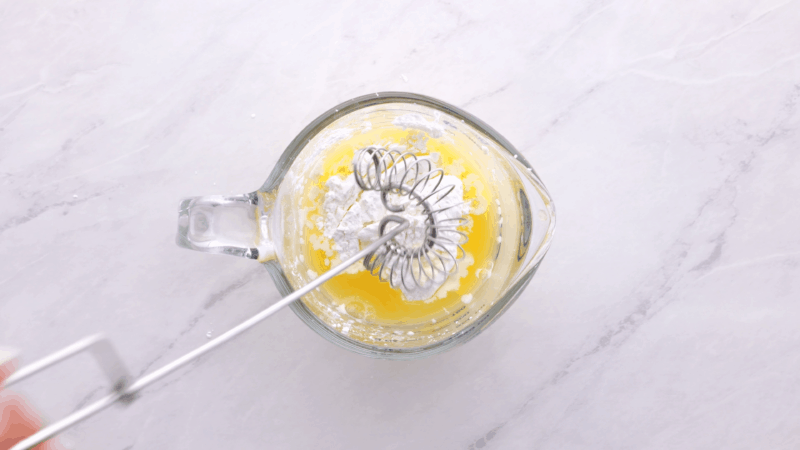 With a fork or whisk, mix together the cornstarch in the orange juice until it’s completely dissolved. 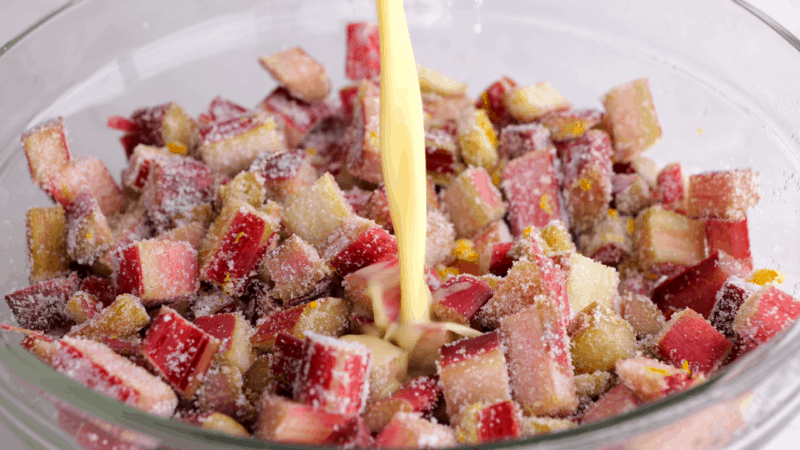 Add this to the rhubarb mixture and mix all the ingredients together. 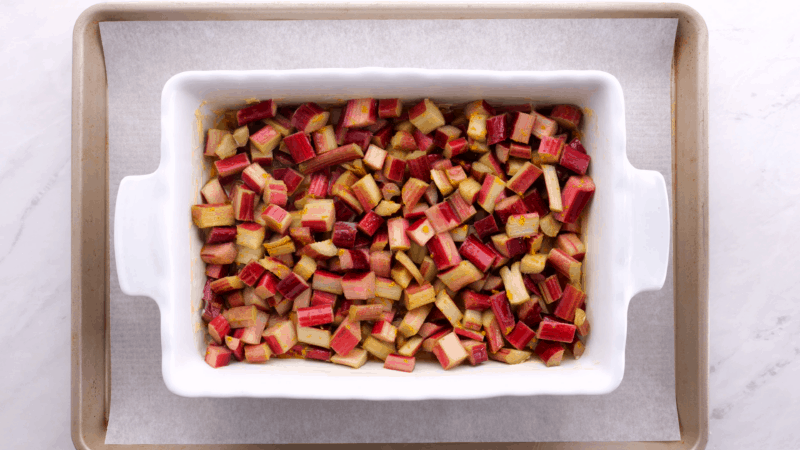 Then, pour it into the baking dish. Set aside. 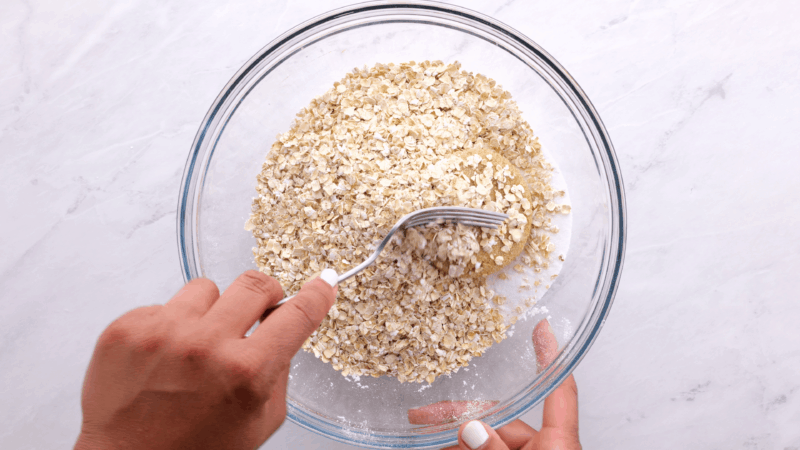 In a 2-quart bowl, mix together the flour, granulated and brown sugar, salt, and oatmeal. 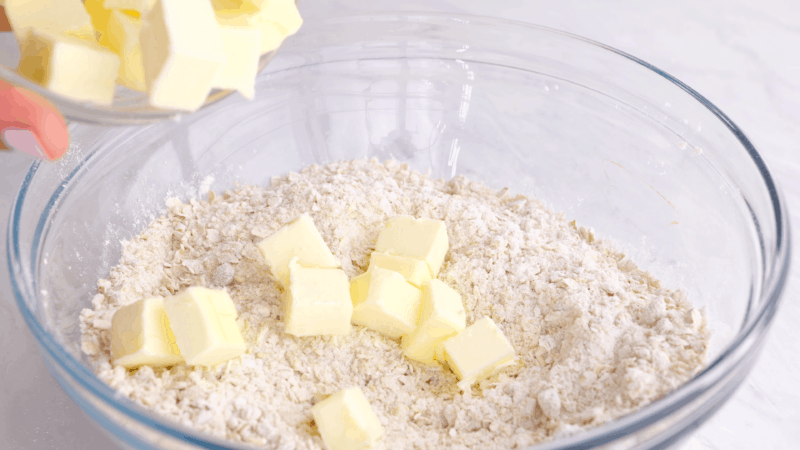 Cut the butter into tablespoons and then cut those tablespoon-size pieces into another 4 pieces of cold butter. This makes it easier to cut in.

Put the slices of butter over the dry ingredients mixture. Then, using a fork or a food processor, combine the butter into the mixture until crumbly. 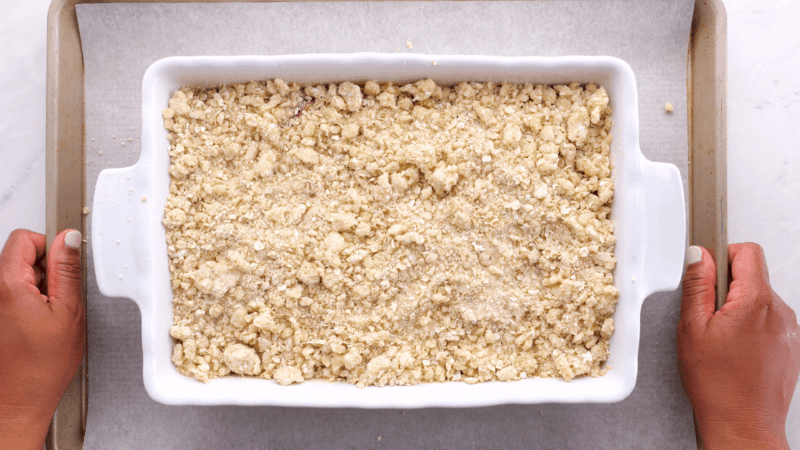 Sprinkle the topping over the rhubarb mix, covering the whole thing. Bake for an hour or til the topping is golden brown. 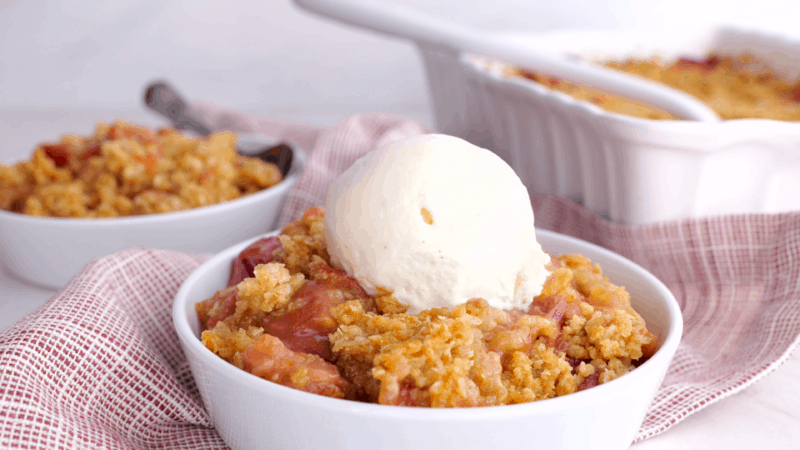 Allow the rhubarb crisp to cool for about 1 hour before serving.  It’s important to let it set a little or it will be watery.

Serve warm with a scoop of vanilla ice cream or whipped cream if you like. 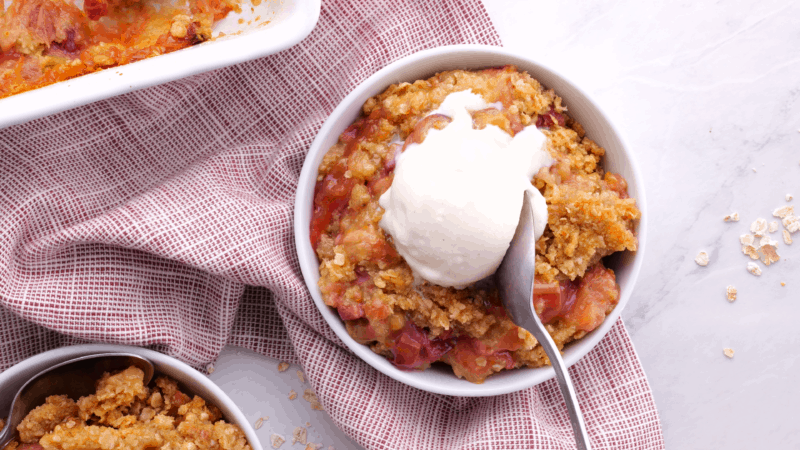 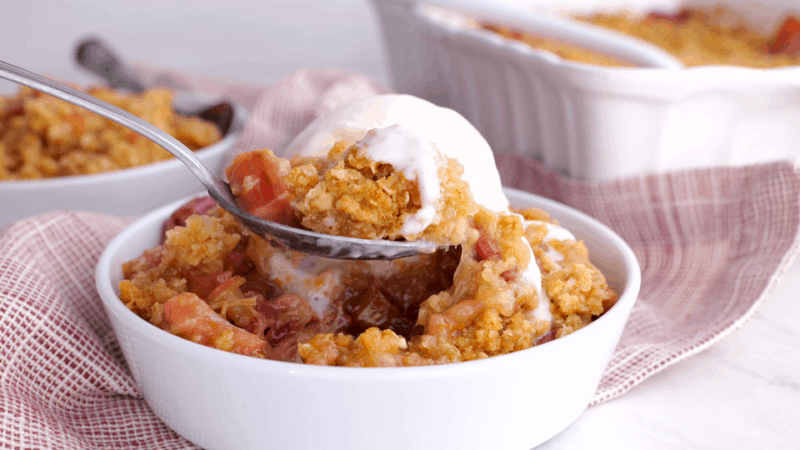 Rhubarb has a very distinct taste. Because of its low natural sugar content, it’s can be a lip puckerer :), pretty sour and tart.

Is rhubarb a fruit or a vegetable?

It is a vegetable. A lot of people think it’s a fruit because it is sweet and used in desserts but low and behold, it is a perennial vegetable.  Well shut the front door!! 🙂

What part of rhubarb do you use?

If using homegrown rhubarb, you only use the stems of a rhubarb plant as the leaves are actually toxic.

What can I make with rhubarb besides this crisp?

In terms of desserts, you can make a delicious rhubarb pie, a strawberry and rhubarb crumble, a rhubarb cobbler or simply serve the it with custard. But for savory dishes, rhubarb is often used to add an interesting flavor to soups and stews. You can also cook it with spinach as a side dish! It’s a versatile vegetable for sure.

Can this rhubarb crisp recipe be made gluten-free?

What’s the difference between a rhubarb crisp, cobbler, and crumble?

The only significant difference between a crisp and a crumble is that a crisp’s topping has the addition of oats. Meanwhile, a cobbler is prepared in a deep dish without a crumbly topping. If you’re curious to try a cobbler yourself, here’s our deliciously easy berry cobbler recipe.

If you enjoy this recipe, check out these other crisp recipes: