Home » Holiday Favorites! » Seven Cakes – Though Dirt Poor, They Had Cake For Christmas 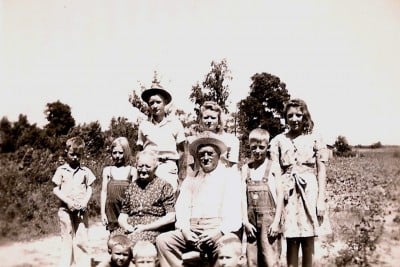 Life during the depression in rural Alabama wasn’t too different from any other time of year for my people. You see, they were sharecroppers – dirt farmers who didn’t even own their own dirt. They wouldn’t have known if the world had been prosperous, their lives had always been a struggle of hard work and all too often relying on hope for the next meal.

This time of year, there wasn’t a whole lot to be thankful for, other than the fact that there wasn’t any cotton to pick. For them, winter was as bleak as the Alabama landscape. In Alabama, we are not often afforded the sight of glistening snow resting atop hills and trees in a winter wonderland. Here, the sky just gets gray and the landscape browns – bare trees, brown grass, and muddy earth where fields lay in wait for spring as far as the eye can see.

My great grandmother had four children and they all lived in a small shack house. Wood was a precious thing and that meant only heating one room. My grandmamma says “it got so cold at night. Mama would heat rocks and wrap ‘em up in old towels and things to put in bed with us but we still got so cold. You didn’t dare get out of that bed unless you just had to”.

Families would work all year for the farmer in exchange for monthly rations of staples such as dried beans, flour, and the occasional bit of meat. At harvest’s end they’d get a percentage of profits on the cotton, but all of the staples which had been provided for them were then deducted from the final cost, leaving families in a continued state of dependence upon the farm owner for enough food to survive the winter.

But with winter came Christmas, and my great grandmother always did manage to make it special despite their hardships. Lela’s life had always been a hard one. Growing up one of nine children in Jackson County, she had spent her childhood traveling from farm to farm with her parents and siblings, picking cotton and tending to whatever crops the farm owner decided to plant. Now she had four kids to provide a Christmas for and keeping them fed and clothed took about all she had and then some.

But she never failed them. She always came through, especially at Christmastime.

Lela squirreled away ingredients all year long. A little sugar here, some dried apples there, maybe some raisins and a bit of cinnamon. After the kids went to bed on Christmas Eve, she’d set to work. Using only what she had on hand and no recipes to speak of, Lela would stay awake all night baking cakes in her little wood stove. She’d make an apple stack cake, a raisin cake, yellow cake with chocolate icing, peanut butter cake, and so on. There was never a plan beyond that of needing to make seven of them – one for each day from Christmas until the New Year.

The next morning, four sets of eyes would open wide and four sets of feet would hurry out of their cold beds into the only heated room in the house where their faces would light up at seeing the bounty of seven cakes sitting on the worn kitchen table. I know how their faces looked because my grandmother’s still lights up the same way now, some seventy years later, when she talks about those cakes. The kids took turns being the one to choose the cake they ate that day and between the six of them and any company who happened by, they made short work of it and were ready to start with a new one the next morning.

Most kids today would consider having cakes baked for you as your only Christmas gift to be a disappointment. But amid all of the wrappings and bows, gift sets and feasts, I hope your Christmas somehow manages to be as magical as it was in that little sharecroppers house in Alabama during the depression, when four kids woke up with stars in their eyes at finding seven cakes.

Click HERE for a printable PDF of this story

Hi Christy, first I want to wish you a Merry Christmas, and a happy 7 days from now thru New Years! Your 7 Cakes story made me think of my mother’s family, who were NE Alabama cotton farmers. There were 8 siblings in my mother’s family – 3 boys and 5 girls. Mom was the youngest girl, and was born in 1930 She told me so many stories of picking cotton, flour-sack dresses, and the hardships of growing up during the Great Depression. There Christmas gifts were what they found in their stockings – an apple or an orange, and a peppermint stick, My grandmother also managed to bake a special cake for Christmas. This story brought manty memories back, and warmed my heart. Thank you and God bless!

Thank you so much for sharing this story, It reminds me so much of what my Granny went through when she was young with her wee ones. Even though times are getting tough. It makes me appreciate what little I have. God Bless you, my dear.

What a wonderful story! Seven cakes sounds like a very special Christmas! Thank you for sharing with us! God bless!

Not a family tradition (yet),this year on the 21st of December (winter solstice) we observed a Blue Christmas service for those folks who may be in depression, grief – whatever makes us “blue”. There was soft music, candlelight and after some quiet reflection we were able to share our experiences with others if we cared to. After some silence, we were then free to linger or depart.

What a wonderful idea! So many people struggle around the holidays so this is a wonderful tradition to start!
Many blessing for a safe and healthy 2022!