Home » Side Dishes » Craving Beans – and a not funny, funny story about them 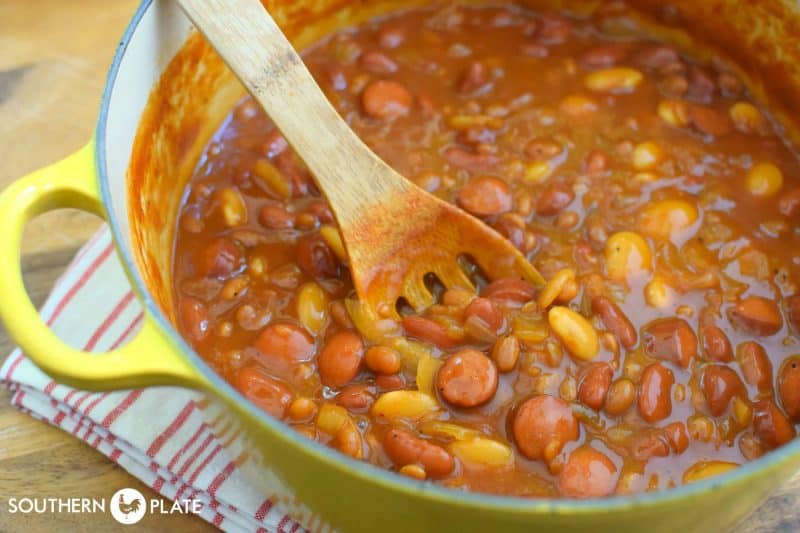 There is a story behind these beans….

I worked up this recipe about three years ago, when I was writing my book, Come Home To Supper. It took about two tries to get the flavors just right and the very next day after that, I woke up CRAVING these beans. I called my friend Jyl and ranted like a mad woman over how amazing they were, so she made them that very day – and then she woke up the next day CRAVING them.

So here is where the funny, not really funny, but really kinda funny story begins….

Jyl had a friend that very week who had a death in the family. Like we always do when that happens, she called me to go over what food she should make and take. Southern women bring food whenever bad things happen and we love to collaborate on the menu (because we don’t JUST bring one thing) with other Southern women to make sure we are bringing a well rounded spread of nourishment in order to sustain folks through their bereavement. We know you’re hurting and there is nothing we can do about that, but we can feed you so we want to do that to the best of our abilities.

Craving Beans Was a Hit

We both immediately decided that she should take Craving Beans as one of her dishes.

That night, she got a call from the family telling her how good those beans were and asking about them. They were the hit of the funeral. It is a rare thing to go to a funeral where we live and not leave with a few good recipes.

So the next week, that very same friend had another death in the family. Can you imagine? One right after the other. It is hard to even think about.

She called Jyl to tell her and ask if she would make those beans again.

Of course, Jyl did. A double batch that time, if I remember correctly.

Two weeks later, Jyl got a phone call. The same sweet friend had suffered yet another family loss and she wanted to know what time the beans would be there.

Jyl called me in disbelief that one person would have to suffer so much in such a short period of time and to let me know that, surely to goodness, the beans were a huge success. I told her “Jyl, you don’t reckon she’s knocking them off so she can get more Craving Beans do you? You ought to offer to take her some next week, just to make sure no one else dies.”

So if y’all have a copy of my book, Come Home To Supper, this recipe is on pages 55-56. Goodness. People will kill for these beans and here you have had my book all this time and not even made them? Okay, maybe I should have chosen a better phrase to use in my previous sentence…..

But you get my point. Craving Beans. Good. Make. Now. 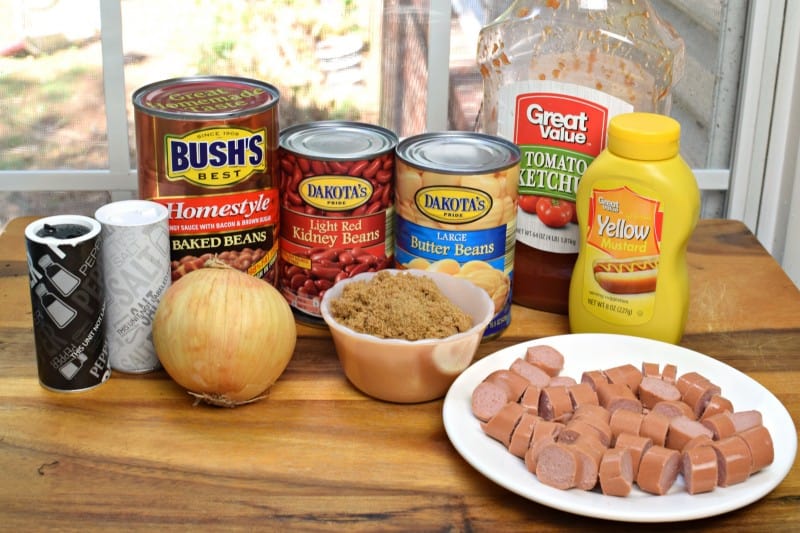 Do I Have to Stick to One Size of Baked Beans?

*In the recipe below, you’ll notice that you don’t have to stick to one certain size of baked beans. The recipe in my book calls for one size but I rarely have that size now so I have just kinda let that go over the past couple of years and they still turn out great. 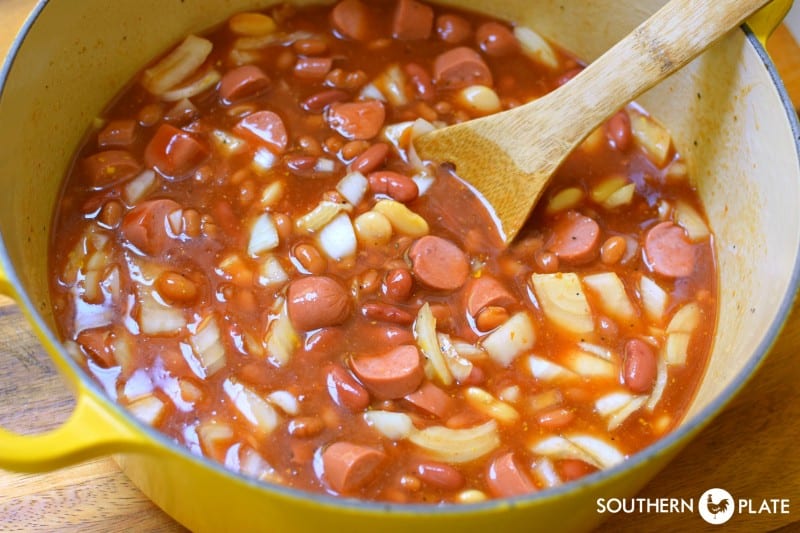 Okay, this is where the recipe really struts it’s stuff in the “oh so delicious but completely uncomplicated” department.

Put everything in a 5-6 quart slow cooker or dutch oven and stir. That’s pretty much it!

What are you doing? Get off the computer and hurry up and make some!!! 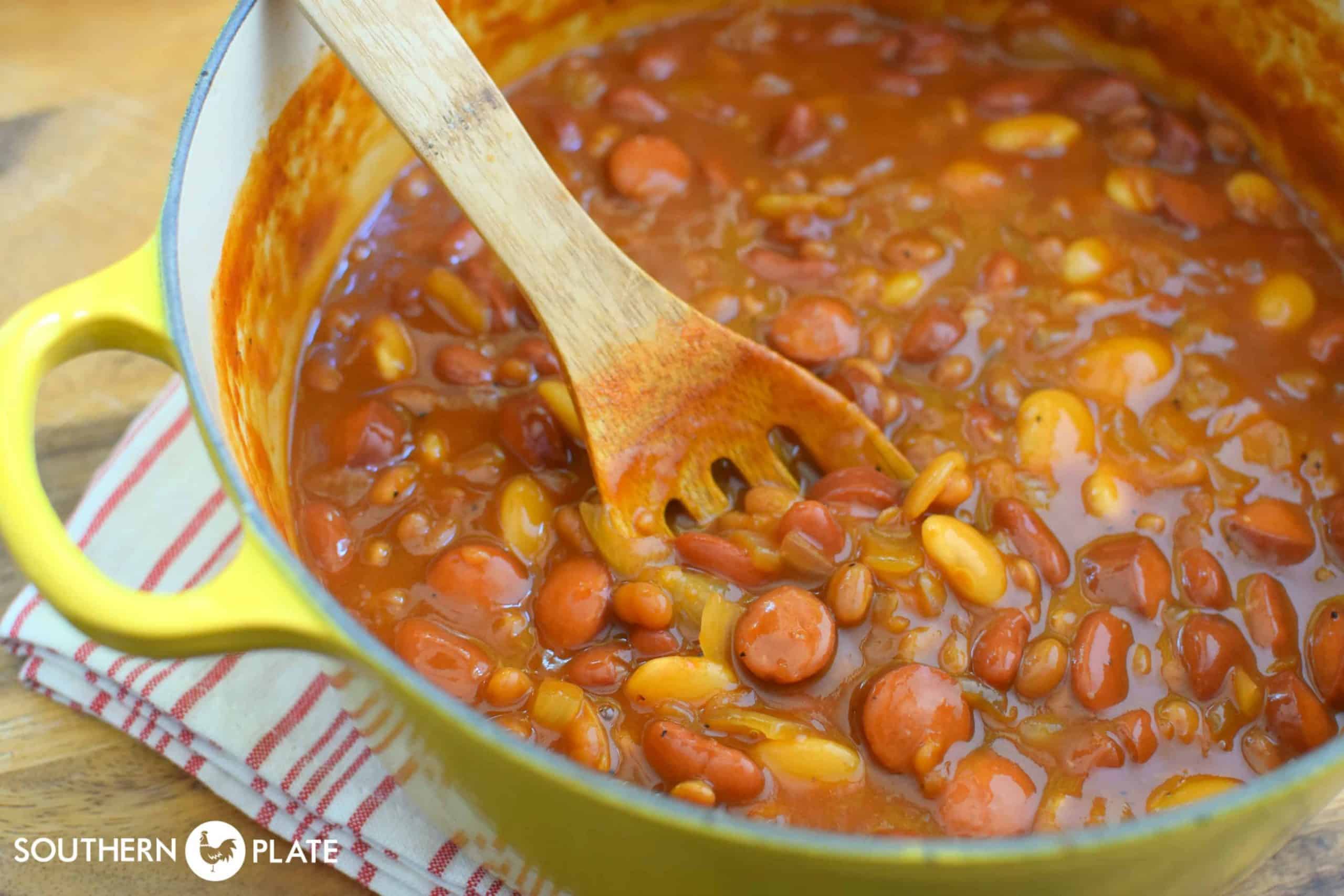 If using a Dutch Oven

These are also great with kielbossa sliced into coins instead instead of weenies. I also use chopped bell pepper and a “glub ” of vinegar. Give me a slice of homemade bread and that is a meal.

I really like Kielbasa. Have you noticed how affordable it is in some places lately? I’ve been able to pick up some good deals and use it as the main meat in several of our meals. I agree on the bread (and vinegar) too! Love both!

Samantha
Reply to  The SouthernPlate Staff

Christie, I really like kielbasa too. When it’s on sale, I usually buy a couple and freeze them. I used to slice the kielbasa on the bias and saute it with onions and sauerkraut, and serve it on a roll until I found your recipe for the “Banjo Pickers” sandwiches. We love them and I make them often! In fact, I had them on the menu for next week, but I think I’ll have to try this new recipe with the hotdogs and beans first.

Wow, these look delicious! Seems like a complete meal by itself too; maybe serve over rice if you really need to with a vegetable on the side?

The SouthernPlate Staff
Author
Reply to  Meg @ Pinch of Nutmeg

Esue
Reply to  The SouthernPlate Staff

I made these beans and loved them. Will make again but with less brown sugar, a little to sweet for me.
Christy, love your recipes!

I am so glad you liked them Esue!!

I have been making these beans for over 30 yrs, the only
difference is I make them with a lb of bacon not hotdogs.

I, too, have been making these beans for a while. Our family call them Cowboy Beans. I use all the same ingredients you have listed but I also include chopped green chiles (in a can from the Mexican food section), chopped bacon along with smoked sausage, but I also add a 1/4 cup honey, and heaping tablespoon of what ever type barbeque sauce I might have in my fridge, usually Sweet Baby Ray’s original. I bake in the oven for 1 hour at 350 covered with foil. I get raving compliments and my family always bring take home containers almost fighting over the left overs and who gets to take more home than the other.

A. Paige McCown
Reply to  SarahLee

These are definitely DELICIOUS BEANS!! I’ve also been making these beans (same basic recipe) for a couple of years now – – and they DEFINITELY ARE ADDICTIVE!!! I also use 1/2 lb – 1 lb bacon instead of the weinies (although I may have to try it with the weinies – LOVE me some hot dogs!!), and I also usually make them in the over at 350 for 1 hr; Would be MUCH more convenient in the crock pot, though! Thanks Christy for a wonderful recipe website and for a couple of cool new ideas for an old recipe!!! 🙂

The SouthernPlate Staff
Author
Reply to  A. Paige McCown

I can’t wait to hear what you think if you try them with the hotdogs!!

I love your site so glad I found it, ironically the baked bean recipe is almost identical to my bean bake recipe i made up years ago slow cooked is great but ohhh so much better baked in the oven we love the texture and serve it over rice for a special dinner and i add up to 5 beans chick peas and pintos or black beans or black eye peas and our secret ingredient black strap molasses everyone requests these beans for every function known to man, thank you for sharing

One of my son-in-loves fixes something real close to these, we just call them “Bobby’s beans.” ;o) we have one real picky eater who used to request these for every family gathering. otherwise that child only ate peanut butter and syrup sandwiches on white bread and chicken nuggets. I have no idea how he managed to grow up into a big old strapping teenager!

I couldn’t believe my eyes when I saw the recipe for ‘Craving Beans’.It is almost exactly like the recipe I use ,which was adapted from my Moms’s go to dish.The only difference is dash of Worcestershire sauce and 1/4 c. of molasses.My picky eater adult son wants me to make these to take to his UTV races,so we call them ‘Racin’ Beans.Love your recipes and Blog.

Favorite line! LOL! I will pull out my copy of that cookbook next time someone knocks off…I mean…has a death in the family. 🙂

Hey, Christy, thanks for the recipe….can’t wait to try it. Thanks for posting before the 4th! Question, can these be frozen? thanks in advance!

They’ve never lasted that long at my house, however, I don’t see any reason why they couldn’t be frozen. The trick would be in how you thaw them out. You’d want a slow thaw rather than trying to heat them from frozen on the stovetop while stirring and such, because that would moosh up the beans. So if you can take the time to let them thaw in your fridge a day or two, I think you’d be good 🙂

I make these also but instead of hot dogs I use browned ground meat. We call them hobo beans

I also have a bean recipe that calls for browned ground beef. It’s from a fundraising cookbook and the beans are called Best in the West Beans, which is funny because we’re in Pennsylvania!

Thanks for the not funny, funny story, will be trying theses beans soon. Wishing you and your family a HAPPY 4TH OF JULY!!!