Home » Newsletters » How To Season A Cast Iron Skillet

Today I am thrilled to bring you a guest blogger who will be speaking on a topic we all need to know about – how to season a cast iron skillet the right way. As a Mechanical Design Engineer, Richard Hall may seem an unlikely choice for a food blogger, but his heritage, common-sense know-how, and generosity in sharing his knowledge with us make him the perfect choice for a topic of the utmost importance to any Southern cook!  Thank you, Rich! 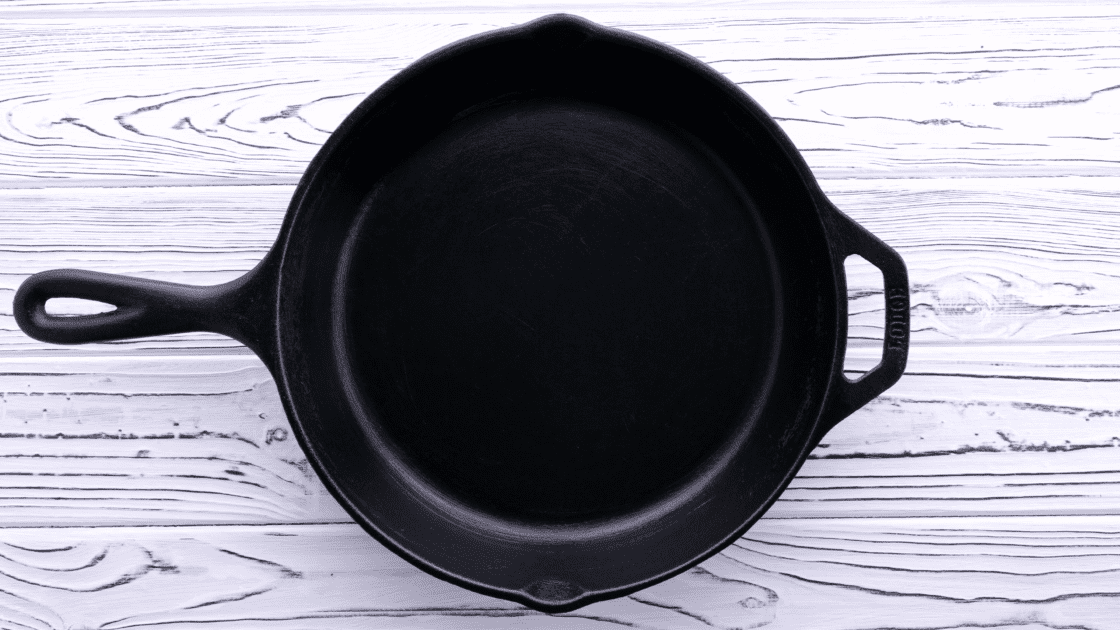 It is a pleasure to blog on Southern Plate. Just as Christy has written about her Southern heritage, mine is similar. Both sets of my grandparents were sharecroppers in Southern Tennessee and North Alabama. I grew up eating fresh Southern food out of the garden and barnyard.

Since Christy has all these great Southern recipes, I thought it might be useful to share how to season a cast iron skillet or other types of cast iron cookware. You may ask, what is seasoning and why do I need to season my cast iron skillet? The answer is very simple. Seasoning cast iron makes it non-stick like all the new miracle cookware. And the why is you can buy and maintain a non-stick skillet with nothing more than vegetable oil and shortening and common sense and it will never wear out. The cast iron skillet can be used to cook on the stovetop, the oven, or the grill. A good iron skillet can be passed down as an heirloom if taken care of properly.

What You Need to Season a Cast Iron Skillet 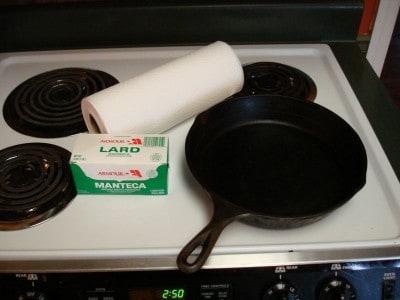 It is very simple to do albeit a little messy. What you will need is:

Just a quick note, the seasoning of a new skillet and the re-seasoning of an old cast iron pan are the same except for the first step. So let’s get started.

How to Season a Cast Iron Skillet 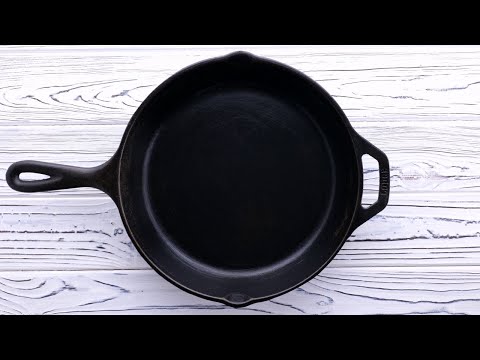 Make sure your new cast iron cookware has been washed in hot water and mild dish soap. This will remove the factory anti-rust coating. For re-seasoning an existing skillet, just make sure to wipe the entire surface with hot water and a clean washcloth or a paper towel (sponges need not apply). Dry the skillet by heating it on the cooktop then let it rest and cool. Preheat your oven to 200 degrees. 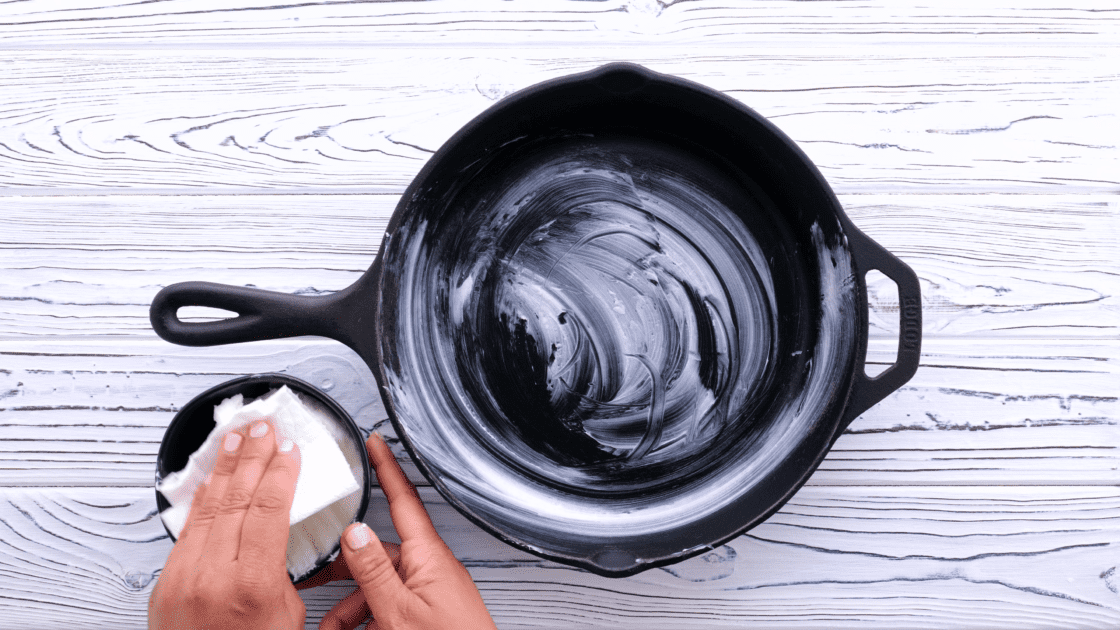 Season with vegetable shortening or oil

Fold the paper towel into a fourth and place a dollop of vegetable shortening in the skillet. The size is not important, but for a 10” skillet, use about 1/4 of a cup. More can be added as required to cover.

Instead of lard or vegetable shortening, use any kind of vegetable oil. I recommend refined coconut oil as it has a higher smoke point. 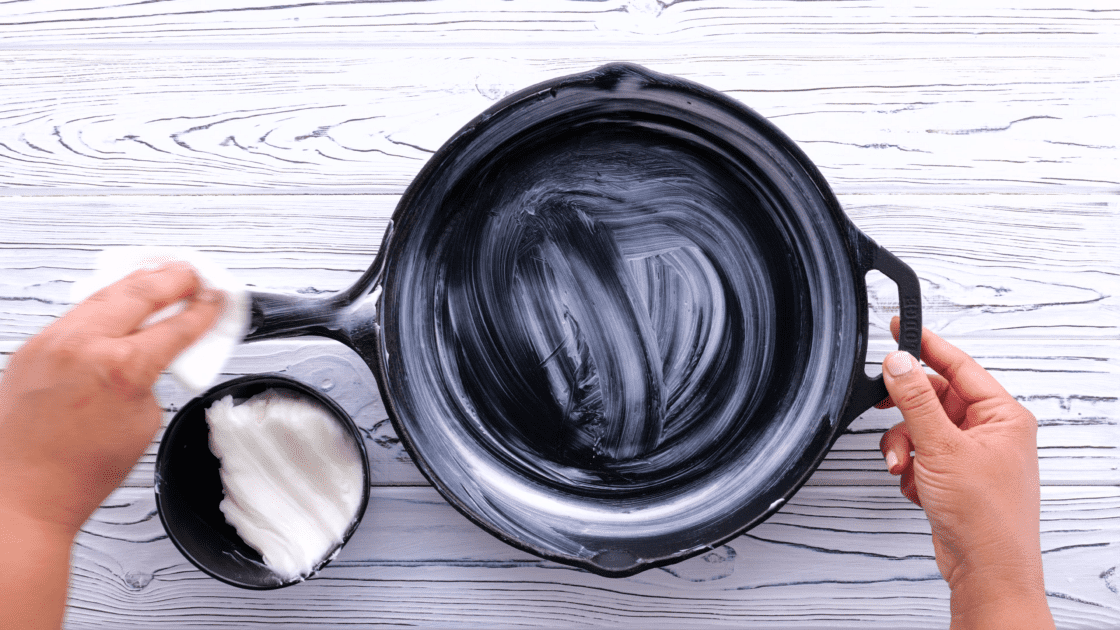 Take the paper towel and coat the interior, the exterior down to the bottom edge, and the handle liberally.

I don’t coat the very bottom of the skillet, as any cooking surface that it touches will make smoke and just burn off the shortening or oil. 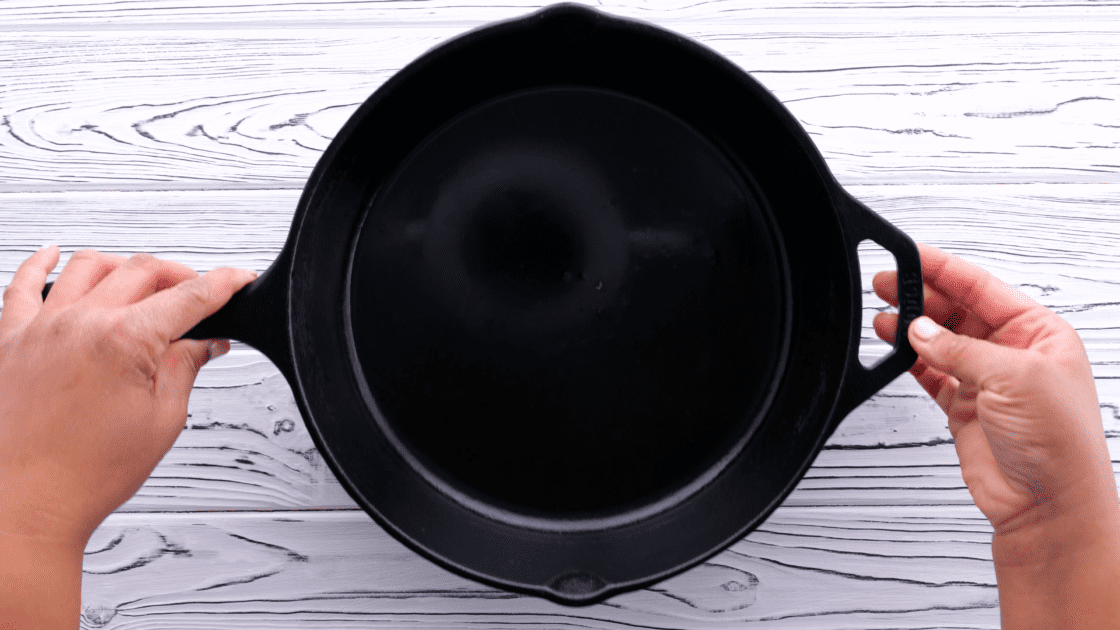 Place the skillet in the oven

Once you have the skillet coated, place it in the oven (at 200 degrees) and set a timer for 3 hours. This low temp will open the cast iron pores up and allow the vegetable shortening to penetrate as it liquefies. 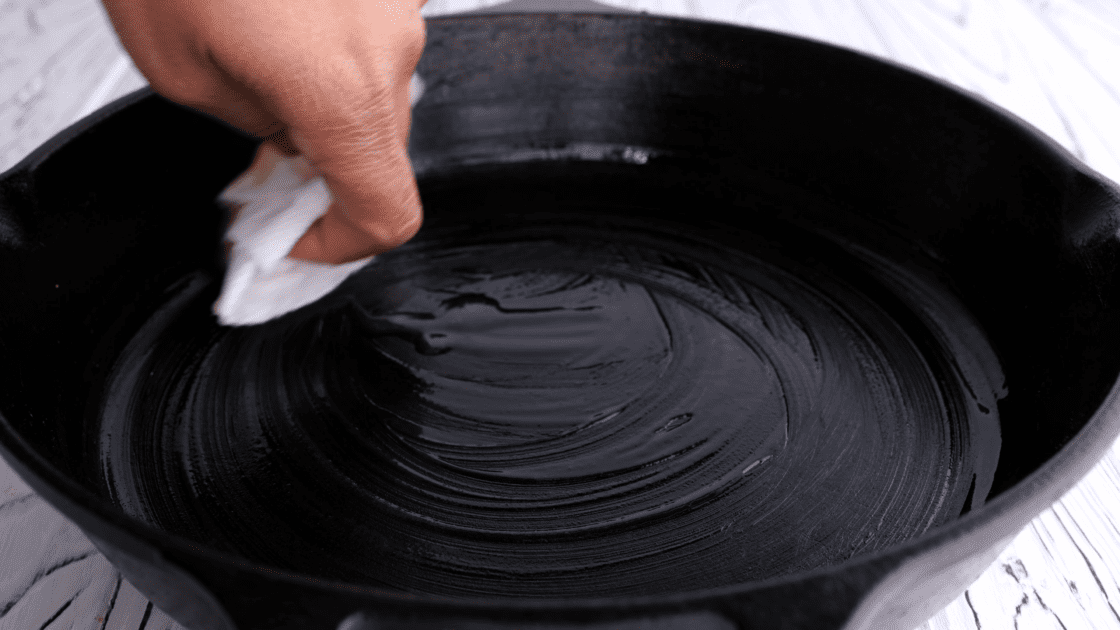 Remove from the oven

After the time is up, cut off the oven and let the skillet cool. Once it is cool enough to touch, wipe it down with another paper towel to remove any excess oil or vegetable shortening and just leave a thin layer on the surfaces. 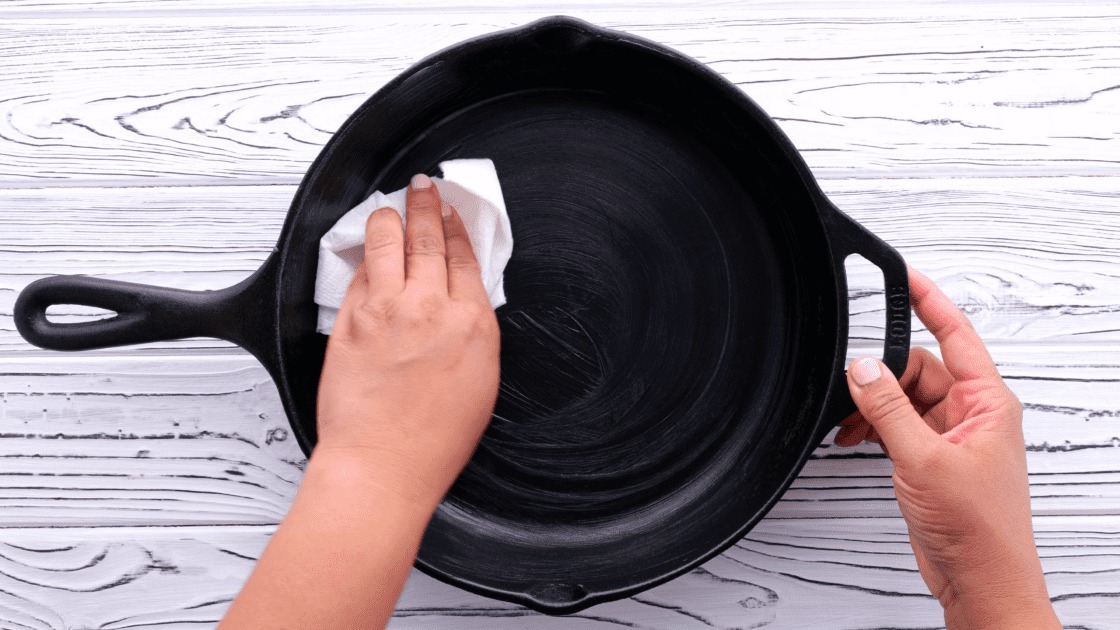 In another hour or so, wipe it down again.

After this final wipe, the skillet will continue to cool and in about an hour will look like the last picture.

Now you are ready to use the skillet. For the first couple of uses, cook something greasy like bacon or sausage. This will help heat cycle and re-coat the interior surface which will make the non-stick coating better. Also, be aware that it is going to smoke for the first couple of uses as it heat cycles and burns off the water trapped in the pores and the excess vegetable shortening.

To maintain the skillet you will need to wipe the interior every couple of months with bacon grease during a heat cycle or cook something greasy and re-season about every 2 years following the process above.

Also, don’t let food sit in the skillet as this will remove the seasoning.

One other note that I personally do is the drying step after a wash. I will turn the cooktop on to high heat and place the wet skillet on it for about a minute. This will heat the skillet up enough to dry the water and heat cycle the pores. This keeps everything as it should be. 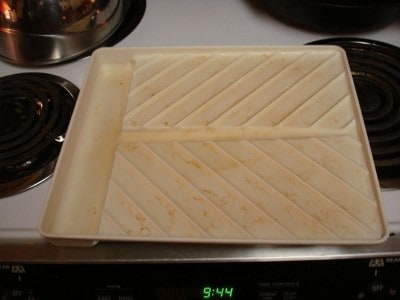 If you choose, you can render your own lard from bacon drippings. If you own a microwave bacon-cooking tray it is very easy.  Just cook some bacon and let the drippings cool either in the tray or pour them into a bowl or shallow dish while still hot. Once it has cooled and congealed, you can use it just like the vegetable shortening as described above. This is perfect for the occasional re-seasoning of your skillet.

I hope this has been helpful and if you have any questions just direct them to Southernplate.com and I’m sure Christy can find me to get the answers.

P.S. From Christy. This post would not be complete without me sharing one of my all-time favorite Southern Plate comments with y’all! Special thanks to Bill Gent for this sweet, horrifying, and hilarious memory!

When I was about 7 or 8 I saw those dirty old skillets and decided I would clean them both really good with SOS pads. My mama would be so proud that I got off all that old black stuff and make-em shiny. I took them outside and used the garden hose since I didn’t wanna make a mess inside. Then I proudly took them to her when I was finished and proclaimed my good deed. I heard a gasp. She calmly said..”Why thank you, honey.. but.. uhh..” I don’t know why I remember it.. maybe it was that horrified gasp that burned it into my memory. ~ Bill Gent

Before you go, check out these great cast iron recipes:

I just prchase a new cast iron skillet and lid..I’m from ol school so, ste by step tell me how to season..im seeing to many ways.I wan a simple one..

I went to a sight on on the net to find out how to season my new cast iron pot that my husband gave me as a present from Cabelas. I covered the pot in olive oil and put it in the oven at 350 for two hours. Sight said to repeat this process 3 times. The last time I did it I covered the pot with Crisco. Now there is gunk in the bottom of the pot. I can scrape it with my fingernail . What do I do about that?

I would scrub it with steel wool, clean it real good, and start the seasoning process again. The ideal is lard.

I have my grandmother’s skillet and dutch oven I cherish and use them all the time. I never use soap if i have a big mess in them I use salt and hot water and it works like a dream. I always use the stove to dry and wipe a bit of oil around after every use.

I just purchased a cast iron humidifier that sits on top of a wood burning stove. If I properly season it, will it be OK to keep it filled with water? I really don’t want it to turn into a rusty mess.

You guys with the old stuff trying to clean it and get it functioning properly probably need to clean it, sand it with coarse then fine sand paper, clean and then re-season. Should be good as new. Make sure sand it evenly. Probably instructions and vids on the web. Easier than it sounds. Good luck!

I have an old cast iron skillet that was my Aunt’s. It has a coating of “gunk” on the sides, and it also has a little rust. Should I sand it down first, then reseason it?

stick it in a bed of coals in a campfire (or as suggested above put it on a grill upside down) then when the fire goes out (or after a few grill hours) remove the pan, the gunk and rust will scrape off easier. Wash, and then reseason. Good as new!