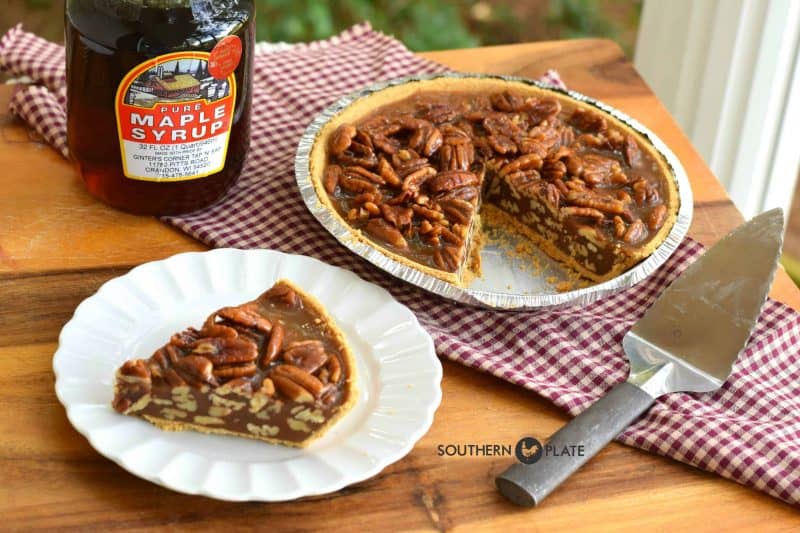 Today’s recipe is for a Maple Pecan Pie. Imagine a Pecan pie, only instead of the gooey part you have a filling that resembles the texture of soft caramel, but maple flavored. Now add the flavors of butter, honey, brown sugar, and pecans and if you’re mouth isn’t watering yet I don’t know what can be done with ya! This pie is so good and sure to be an instant classic.

But before I get into that, I have to tell you how I acquired this Maple Syrup…

I love when life throws little surprises your way, the good kind, of course. Although I realize the difficult surprises, more like curveballs, are great for character development, the little unexpected joy on top of joy surprises kinda help keep us going, you know?

Earlier this year, I took a little trip to South Pittsburg, Tennessee to meet up with a few blogging buddies. We kinda look at each other as co-workers, and it’s a treat to get to spend time with folks who know what your day to day work life is like. These two are Brandie from The Country Cook and Stacey from Southern Bite. 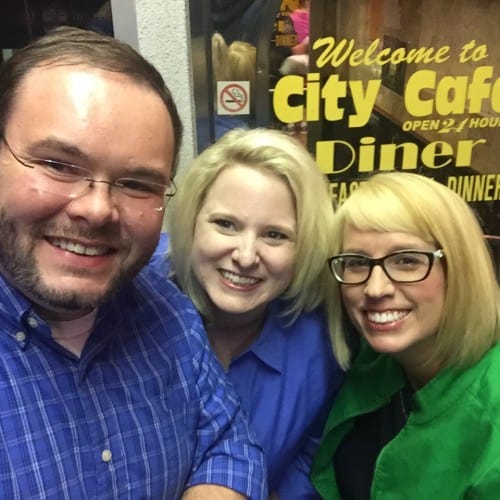 They are always a joy to be around, mostly because they’re crazy. They know all the lyrics to songs I’ve never even heard of and both are able to dance like it’s nobody’s business (I can do the cotton eyed joe and square dance but once you get out of the barn I have nothing to offer). When the two of them are around, I just sit back and enjoy the ride. It is very much like my younger years when I declared myself designated driver and all the crazies were in the back seat. Did I just compare hanging out with Stacey and Brandie to hanging out with a bunch of drunks? Yes, but only in the good ways: everyone is nice and no one gets sick later. 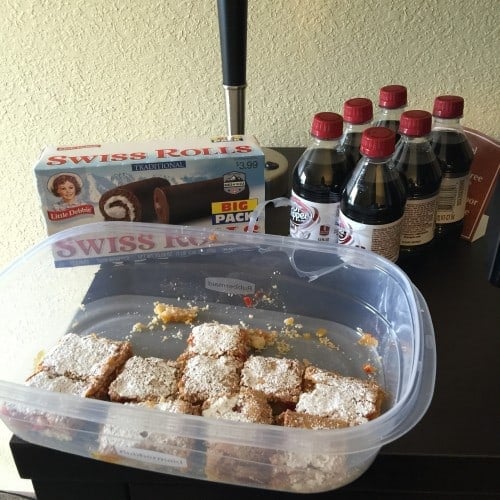 Often, when we get together we bring treats and goodies to share. This last time Brandie showed up with Swiss Rolls, Stacey had Diet Dr Peppers (which happens to be one of my love languages), and I had some jam bars I’d made.  Now, there is nothing I will work harder to avoid than people who put on airs. So let me tell ya, folks who will show up, being known as food bloggers (high caliber ones at that) and pull out the Little Debbies and plastic bottle beverages are right up my alley!

We were having a great time, sitting around laughing and chatting with one another, and then Brandie says “Oh, I have something in my car for you!”.

As we walked behind her to her car,  she pulled out this huge bottle of maple syrup and explained that it had come from her family’s maple syrup farm. ~gulp~ ~gasp~

Family maple syrup farm?  How stinking incredibly cool is that? For me, this is the equivalent of a royal dynasty. It was all I could do not to produce my daughter and say “And allow me to present my lovely daughter as a candidate for marriage to your handsome son!”

I didn’t, although I’m not ruling out marriage or saying I won’t plan something where the kids happen to spend time with one another at pivotal and more matrimonially conducive times in their lives. But for now I’m just happy to have my jug of nectar from Ginter’s Corner Tap N’ Sap.

Oh goodness, I was planning on sharing a recipe with you! Sorry, I tend to get derailed when I fantasize about my daughter marrying into maple syrup royalty… 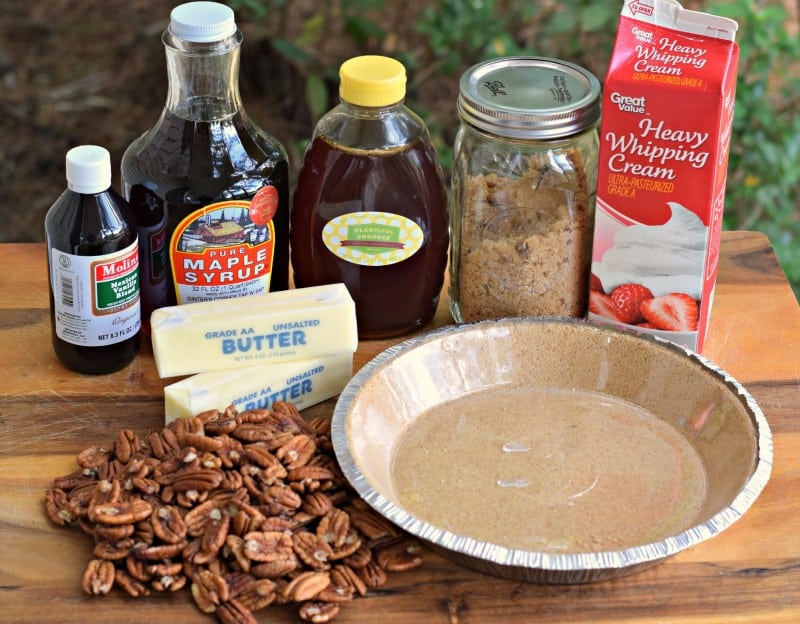 You’ll need: Maple Syrup, Honey, Brown Sugar, Butter, Pecans, Vanilla, and a Graham Crust. For the crust, we’re using a 9 inch crust, not the deep dish one but just the standard size.

If you’re just dying to make your own crumb crust, I have a recipe here. We’re out of gold stars today, though, because I gave them all out to the folks who made an attempt to conquer the laundry mountain last week. So if you make your crust from scratch, versus shelling out a buck fifty and saving yourself the trouble and mess, find a crayon or something and draw a star on a piece of paper and tape it to your shirt. Then, have the usual ceremony of raising a hand to the Heavens, closing your eyes, and saying “I didn’t kill anyone today, I didn’t kill anyone today…”. Oh wait, wrong ceremony. I’m just so used to that one that it comes automatically. Well, you’re on your own for ceremony so do whatever it takes to make it feel official for you. 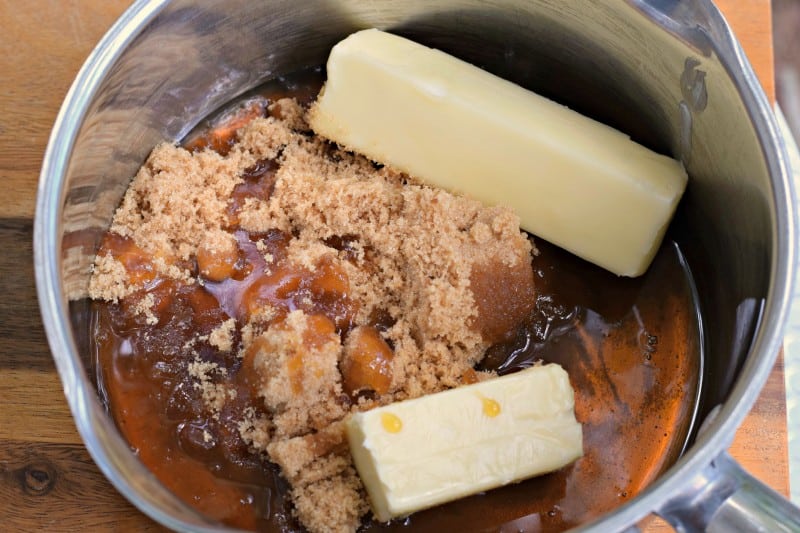 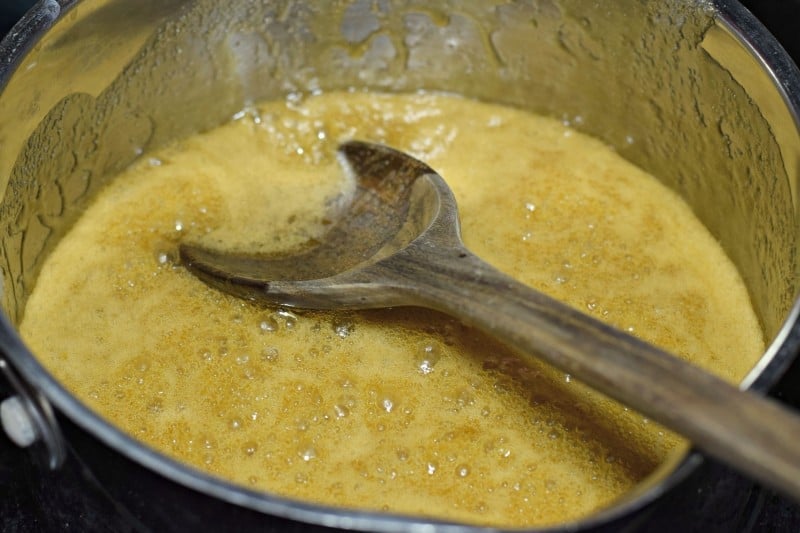 Place this over medium high heat and stir constantly until it comes to a boil. 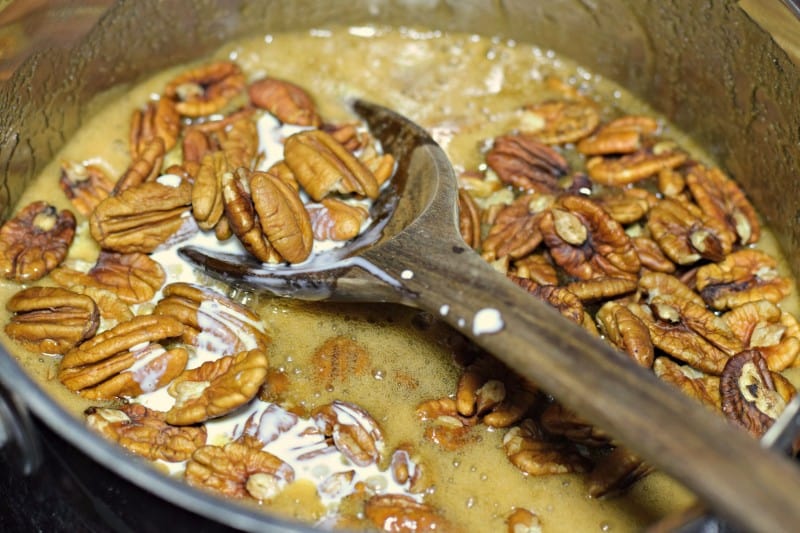 Once it comes to a boil, stir in pecans and heavy cream. 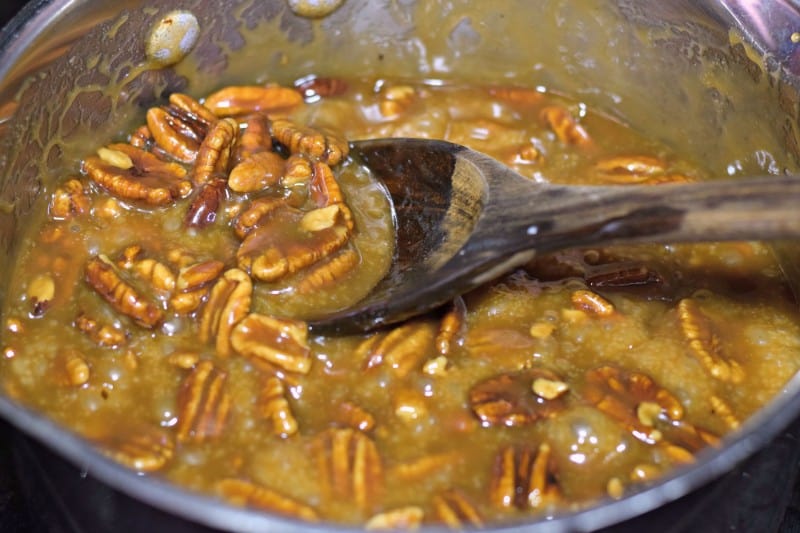 Bring this back to a low boil and cook, stirring from time to time, for 10-12 minutes. 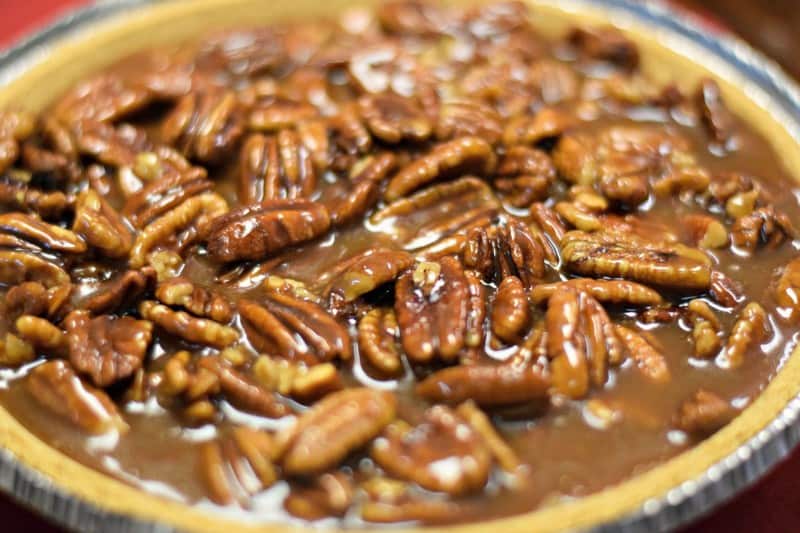 After it is nice and thick, remove from heat and stir in vanilla before pouring into your crumb crust. Let this cool slightly before covering and refrigerating until completely chilled, which will take a few hours.

The pieces of this pie firm up enough to make really neat slices and the texture is one that dissolves in your mouth rather than sticks to your teeth.

It’s so very good! Even better, I know, thanks to good old Ginter’s Tap N’ Sap. But if you don’t live near Ginter’s you can use the maple syrup closest to your neck of the woods. 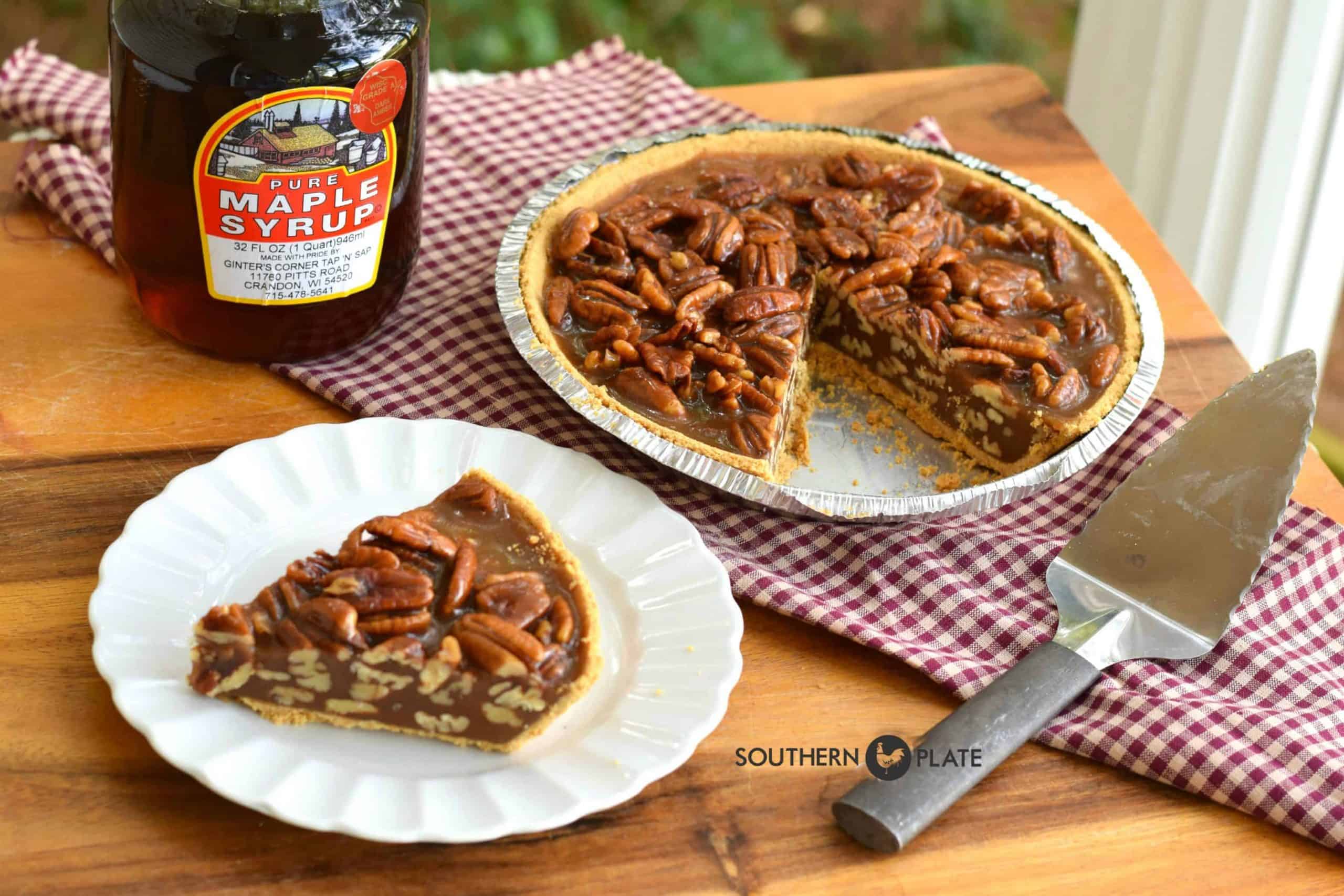