All you need is 4 ingredients to make my easy monkey bread with biscuits. Tasty any time these pull apart soft and flaky biscuits coated in cinnamon sugar and baked in butter to golden perfection.

Monkey bread has been a family favorite ever since my son was a toddler. We made this the other night and I let the kids do all of it with very minor supervision. Katy is still talking about it. Last night when I put her into bed she said “Mama, I really liked making that monkey bread, can we make it again sometime?” So below I’ve included instructions for how you can make your monkey bread with biscuits alongside some little helpers.

But whether you make solo or as a family, the most important thing is that you make it! Because no one will be able to say no to flaky biscuit pieces coated in cinnamon and sugar and baked in butter until they’re golden brown and crisp on the outside and soft on the inside.

As I mentioned, all you need is 4 ingredients to make my easy monkey bread… so there’s no excuse 😉. As you can probably guess, the ingredients are canned biscuit dough, butter, cinnamon, and sugar. The instructions are too easy too. All you have to do is separate each biscuit piece into 2 layers, roll them into balls, and toss them into a cinnamon sugar mixture. Then place the biscuit dough balls in a bundt pan, pour in your melted butter, and bake it in the oven for 30 minutes. So easy but so good, y’all.

Monkey bread is such a yummy snack, breakfast, or coffee (and hot chocolate) treat. We ALWAYS make it at Christmas time but it is great any time of the year. I hope you try out this easy monkey bread recipe these holidays as well. 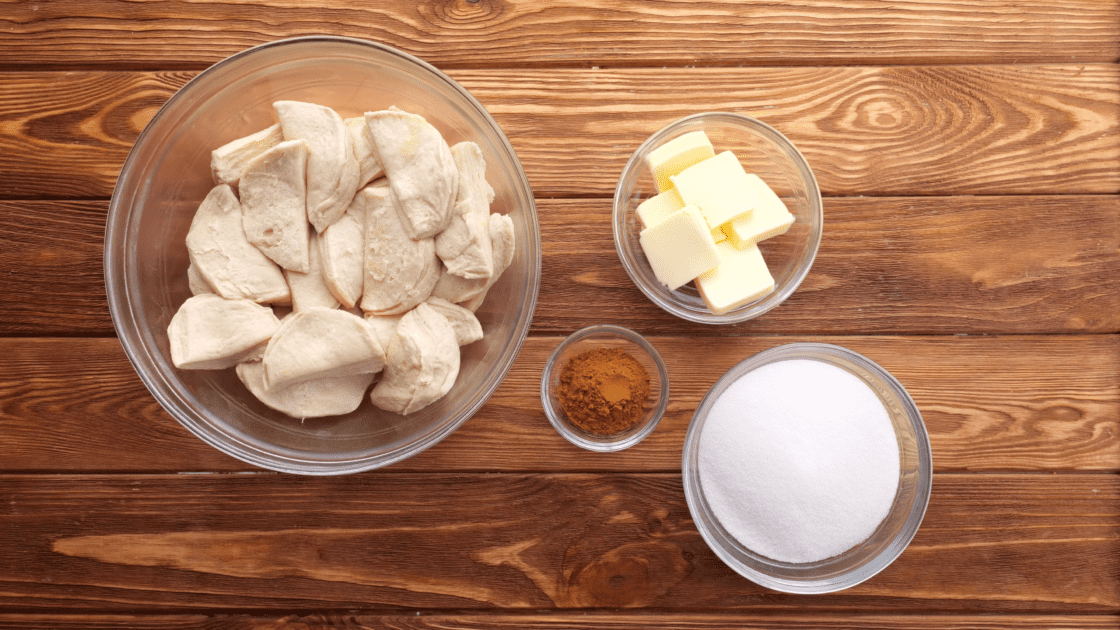 How to Make Monkey Bread With Biscuits 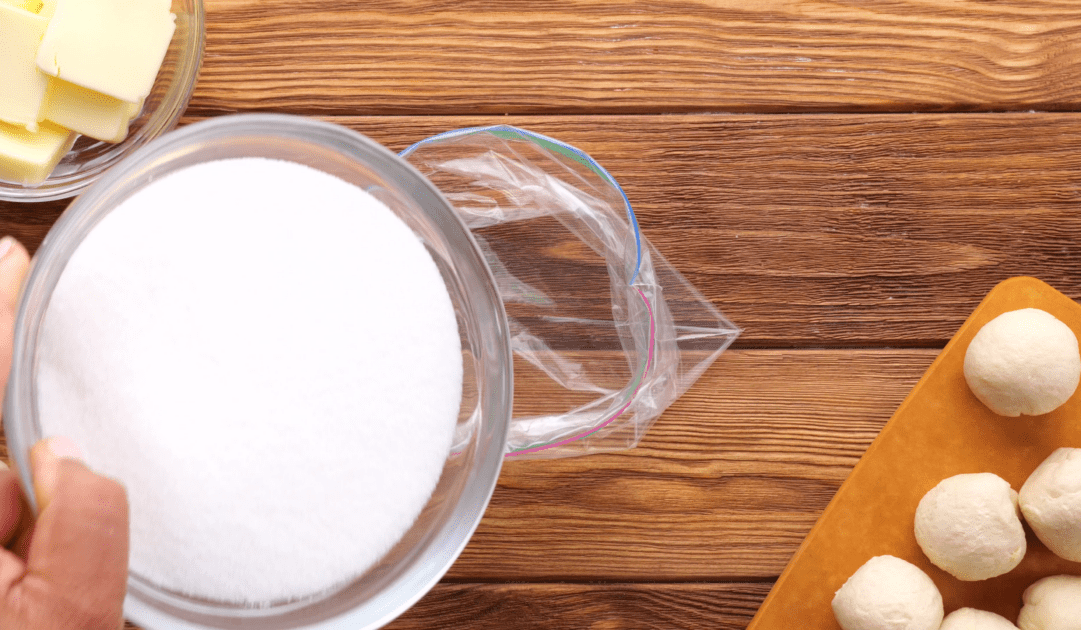 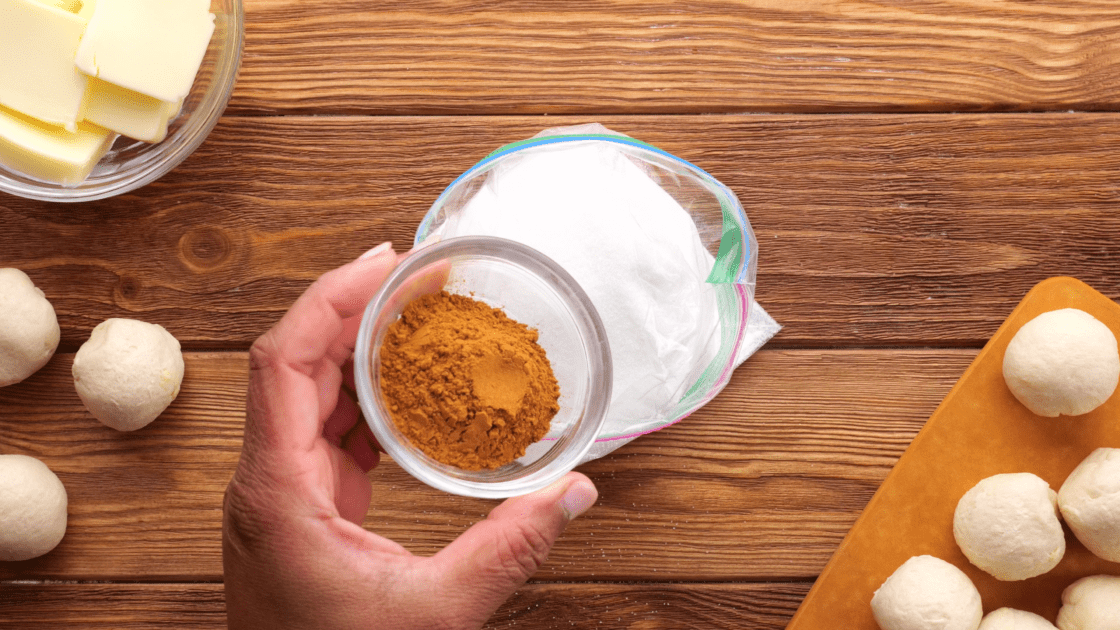 And cinnamon to a zipper-seal bag and toss to combine.

If you have helpers, divide the sugar mixture into multiple zipper-seal bags (one for each child). 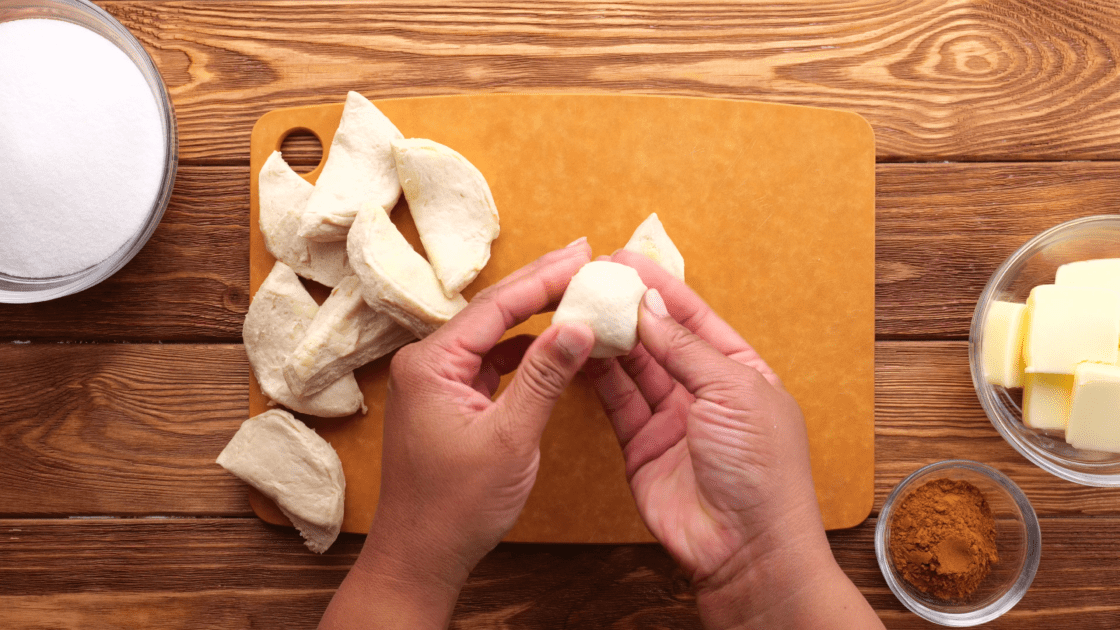 Next, take the biscuits out of the can and separate them.

I separate each biscuit into two layers.

Then I fill a plate with biscuit dough for each child.

Let kids roll each slice up into a ball like this. They really love this part.

Not often that you get to put their play-doh skills to such good use! But rest assured, younger kids will have more uniquely shaped dough balls :). 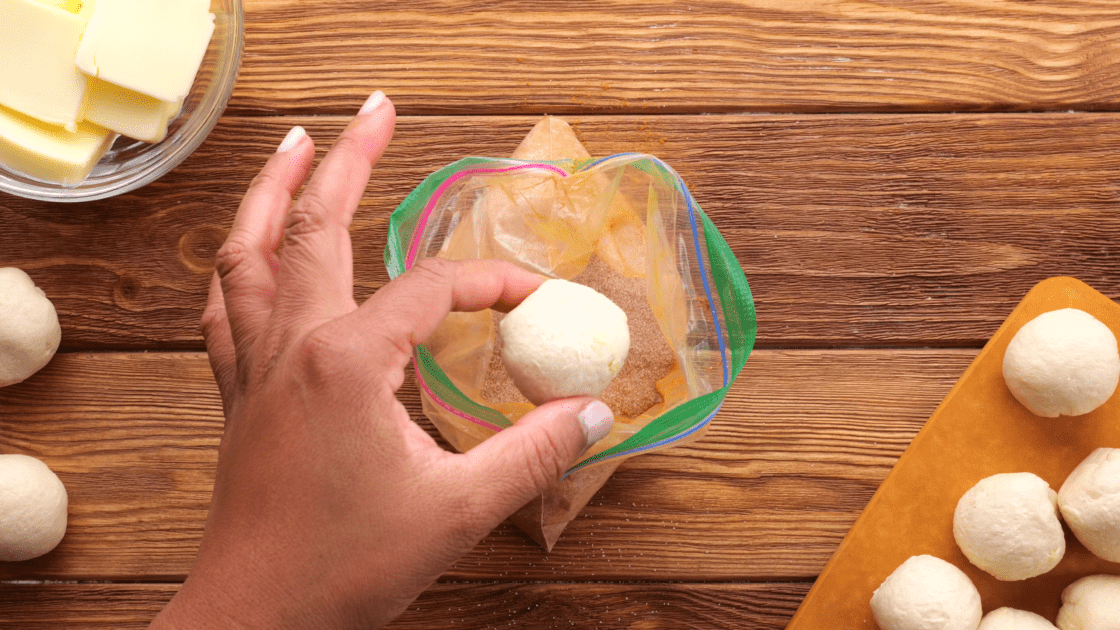 Then have them drop a few dough balls into their bag, seal it, and give it a good shake! 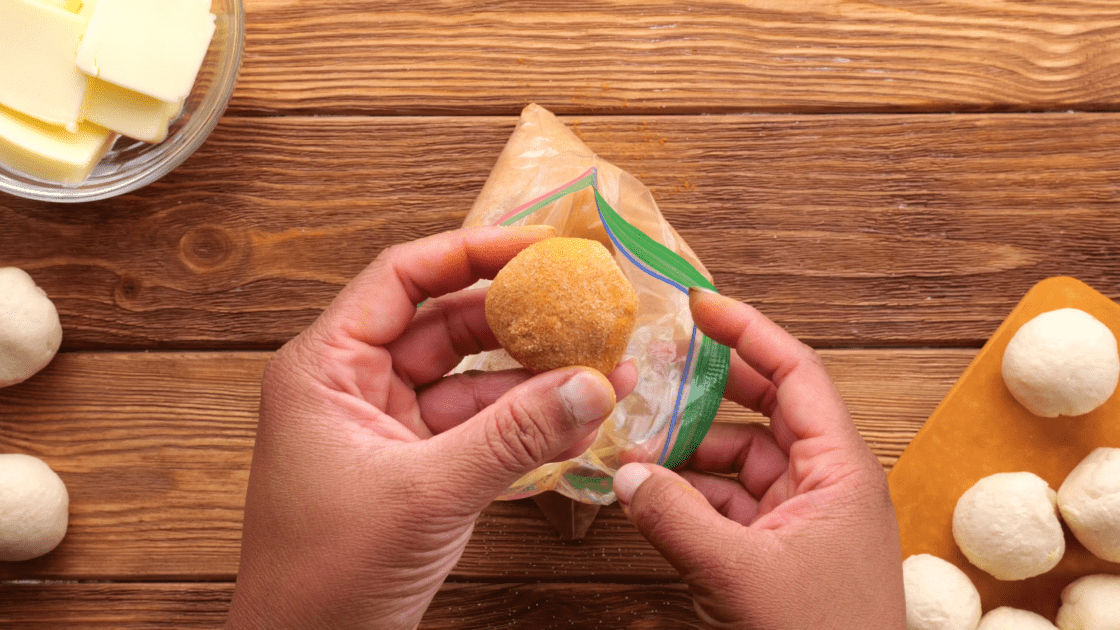 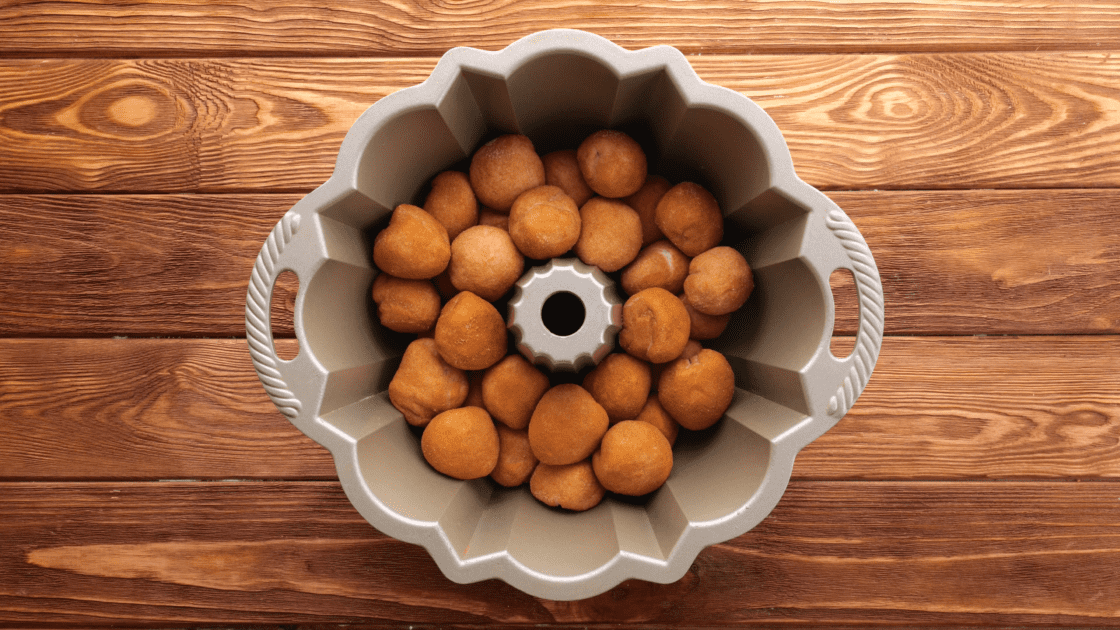 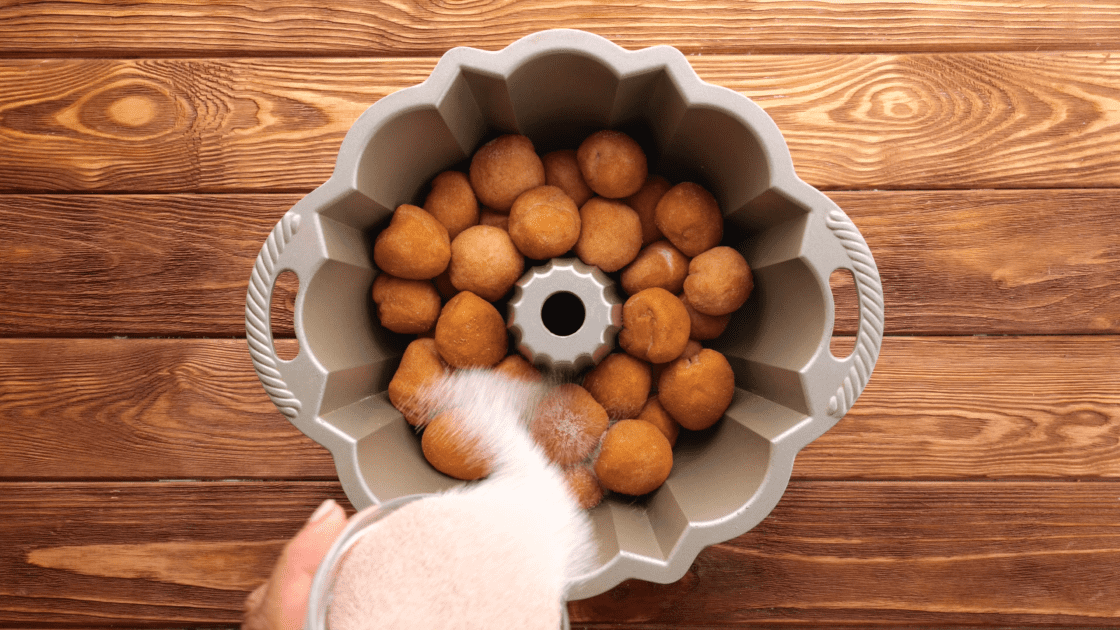 Once I have them all in the pan, I sprinkle a few tablespoons of leftover cinnamon sugar mixture over them. 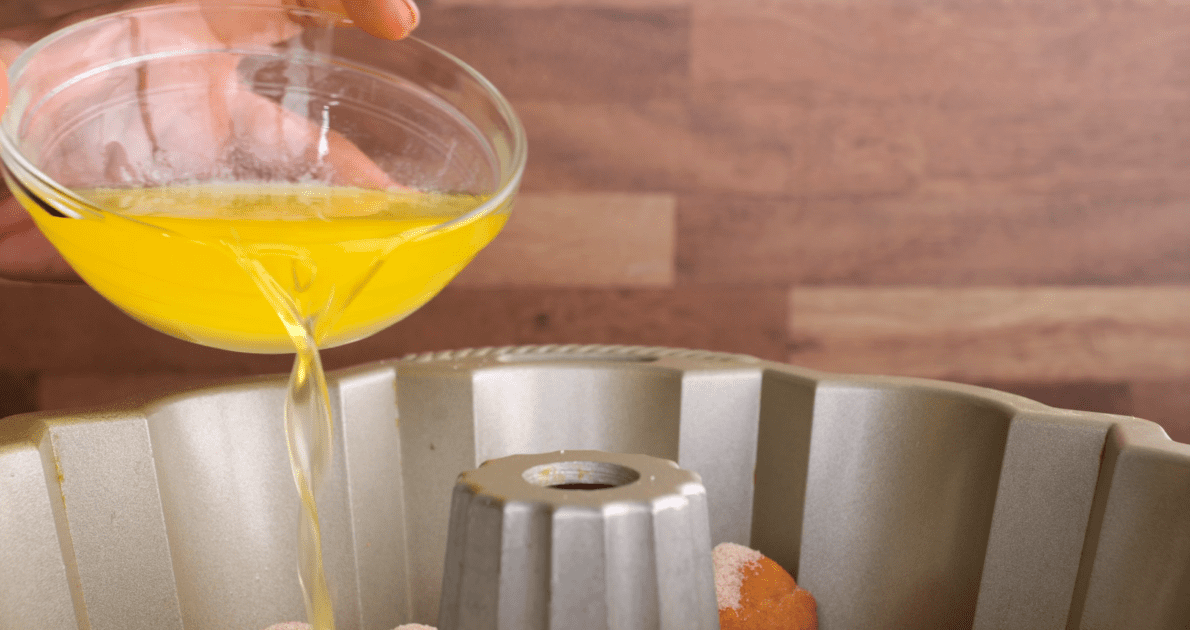 Melt butter in the microwave and pour over the dough balls in the pan. 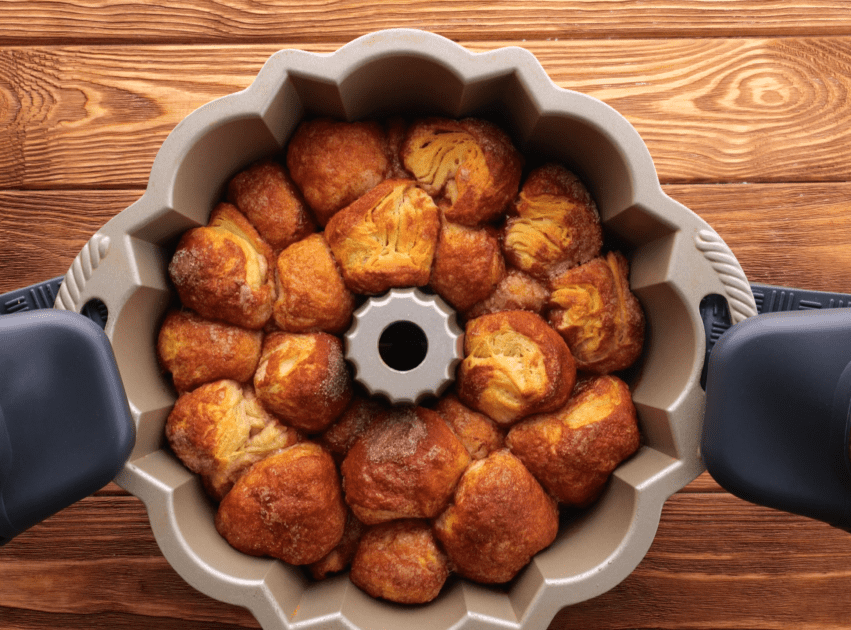 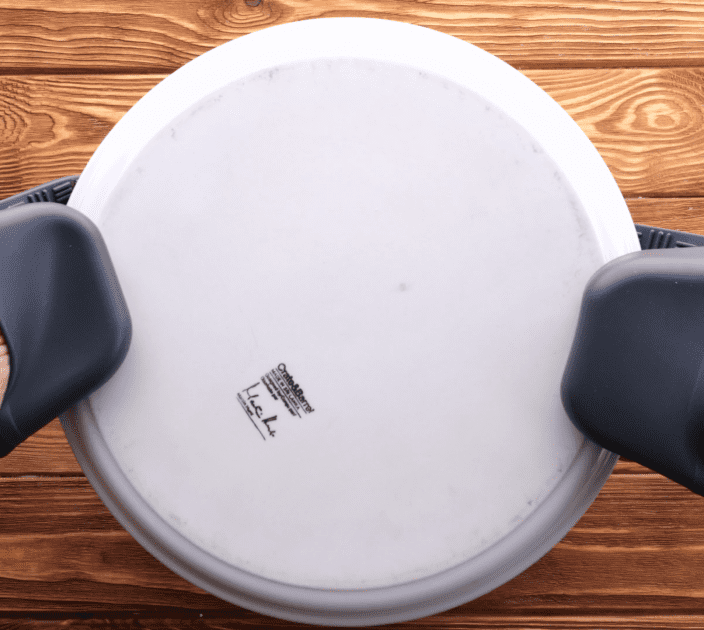 Let the monkey bread sit in the pan for about 5 minutes and then carefully turn it out. As you can see above, I place a plate on top and then quickly turn it over. 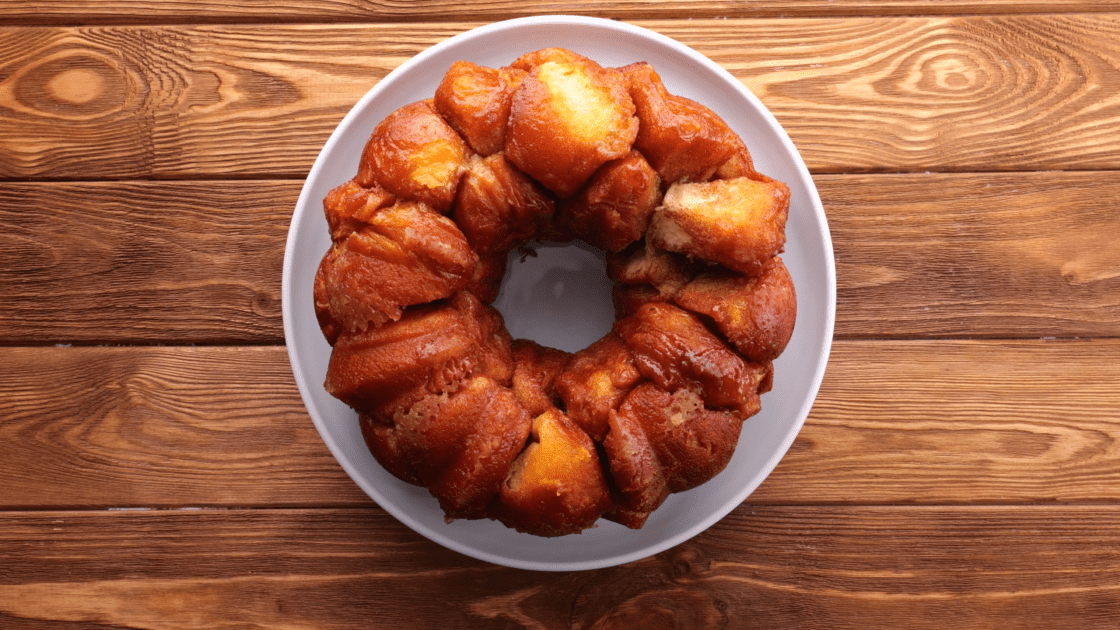 If all goes to plan, it will look like this! 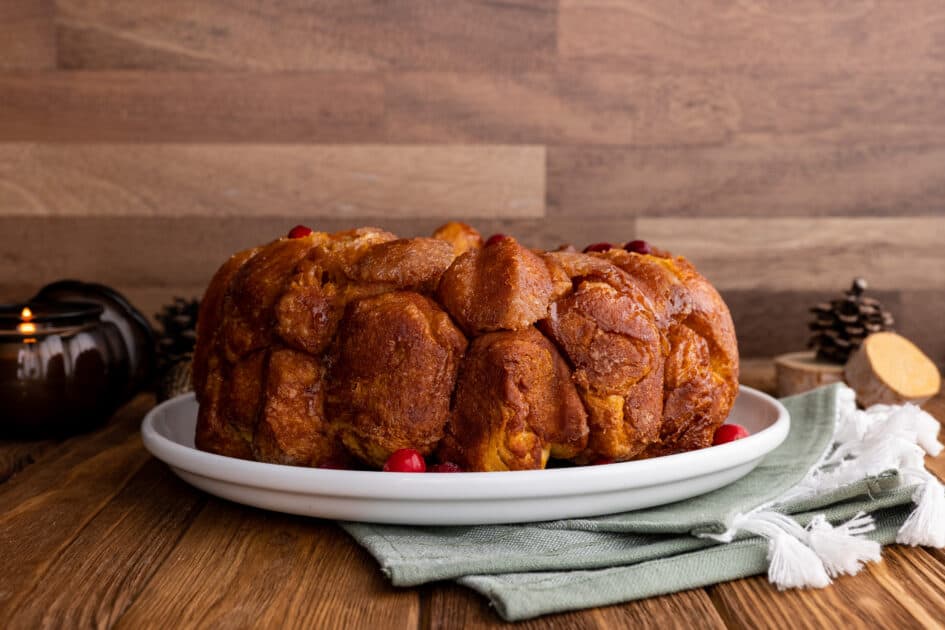 Decorate with some cranberries this holiday season and most importantly, enjoy!

Store leftover monkey bread in an airtight container in the fridge for up to 4 days or in the freezer for up to 3 months. I recommend reheating it in the oven or air fryer briefly before serving.

What is monkey bread sauce made of?

The monkey bread sauce is simply made of cinnamon, sugar, and butter.

What kind of nuts go in monkey bread?

The best nuts for monkey bread are chopped pecans or chopped walnuts. If you like, add half a cup among the biscuit pieces in the bundt pan before adding the sugar. You can also add 1/2 cup of raisins.

Monkey bread gets its name from the way you break off pieces of dough with your fingers like a monkey grooms a friend! Yes, really.

Can I use any type of canned biscuits for this monkey bread with biscuits recipe?

What can I use instead of a bundt pan for monkey bread?

To make monkey bread, you can use a round cake pan, an 8×8 baking dish, a loaf pan, or even a muffin pan (see my monkey bread muffin recipe below).

Can you make monkey bread ahead of time and reheat?

Yes! I’d make it up to 24 hours in advance. Follow the directions until adding the butter and wrap the bundt pan in plastic wrap or aluminum foil and store it in the fridge. Then add the butter before baking the next day.

Check out these other tasty breakfast treats: 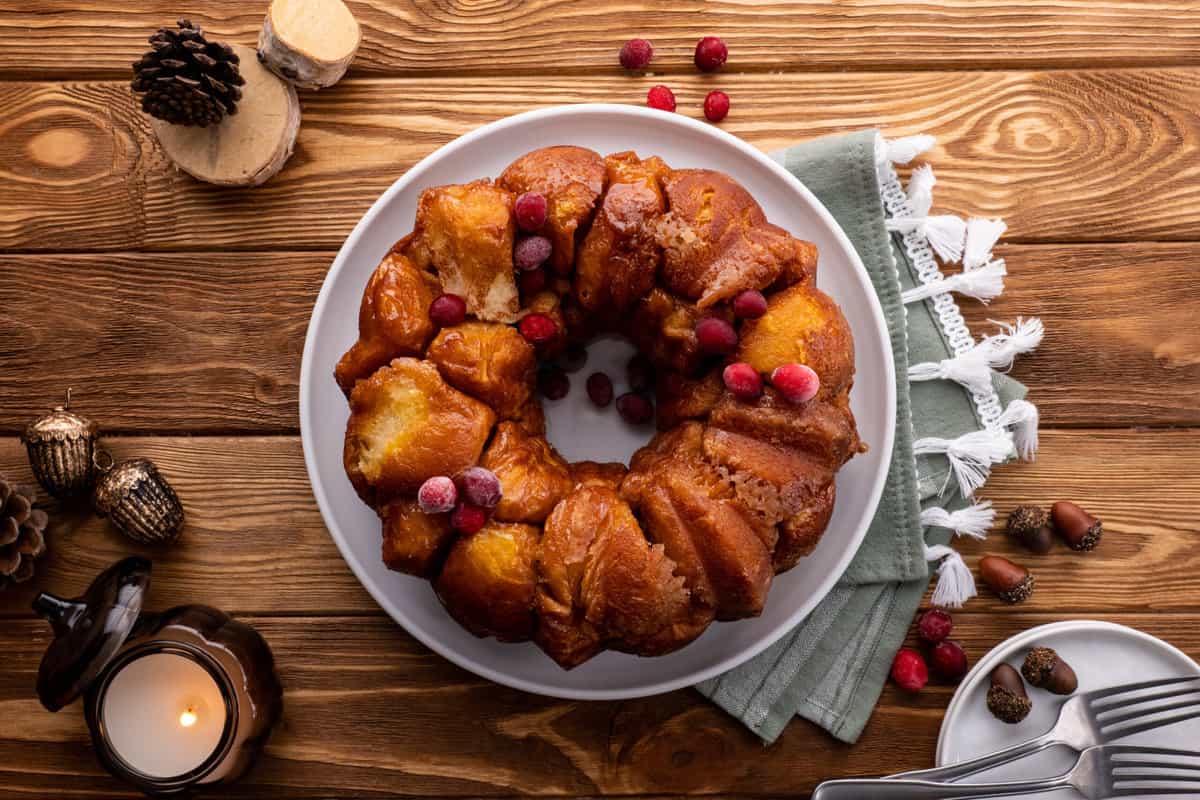 Cooked for over an hour still not done.

Aww those little baby legs. So precious!! I remember when you originally posted this,

Admiring the time and effort you put into your site and in depth information you provide.
It’s awesome to come across a blog every once in a while that isn’t the same outdated rehashed information.

Great read! I’ve saved your site and I’m adding your RSS feeds to my Google account.