You will be over the moon about this Moon Pie Cake! 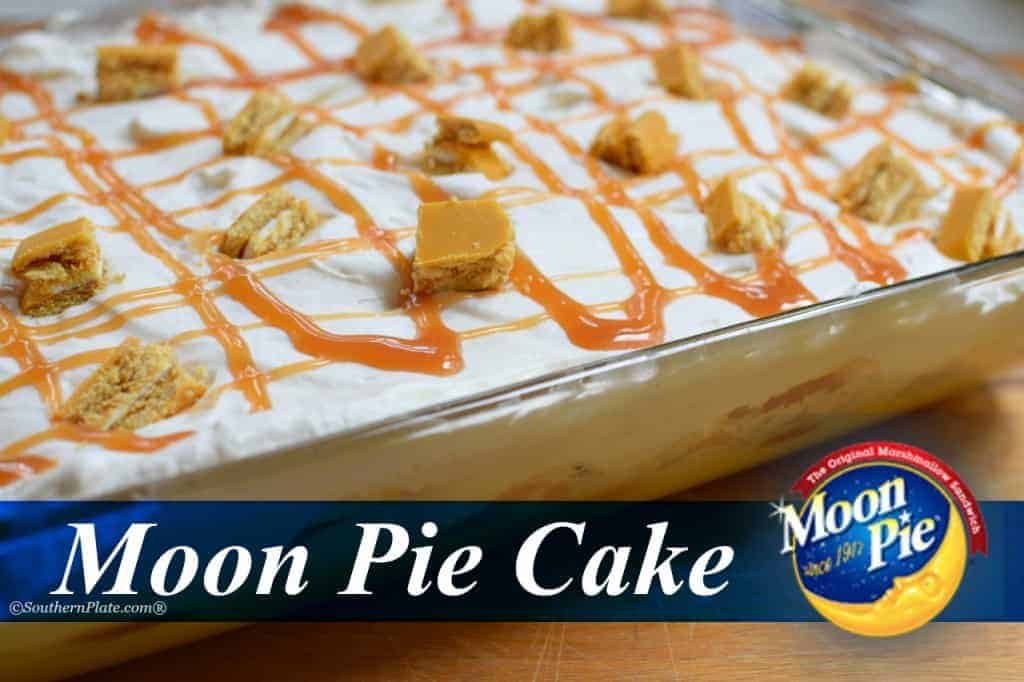 So most of y’all probably know that I’ve done a good bit of tv since the start of SouthernPlate. There is a listing of networks and shows and things I’ve been on at the top of this page (little gray bar). Two years ago I went and spent some time in L.A. and filmed an entire season of a show called Beat The Chefs which aired on GSN just before The American Bible Challenge. 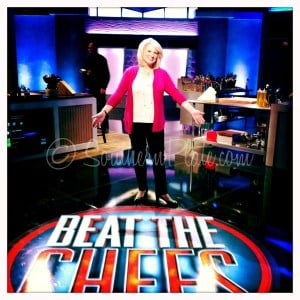 I was one of two permanent judges on that show and we had a new guest celebrity judge each week. It only ran for one season but it was an amazing experience that I can truly say enriched my life and I’m grateful to have had the opportunity.

But shooting a television show can be grueling work behind the scenes. Twelve hour days are the norm and longer days than that are not at all unusual. We had an excellent crew, I mean everyone from the producers to the camera guys to Mike, the guy who came around and put everyone’s mic on (I always loved that his name was Mike…But I digress).

They were all so kind and worked so hard and after about a week of these long days I wanted to do a little something fun on set. As it turns out, Jeff Foxworthy was filming the second season of The American Bible Challenge next door and I thought it would be fun to do something to surprise him as well.

So I called up my friends at Moon Pie and told them I was out in L.A. land with a bunch of hard working folks who had never heard of Moon Pies and asked if they could send me a few cases. (Hey, go big or go home, right?)

Within days some rather large boxes arrived at the Marriott hotel I had taken up residence in. I’d already gotten to know the desk staff by then (of course) and as soon as they saw a package from Chattanooga, Tennessee they knew who the culprit was without even having to look. Yes, I shared… 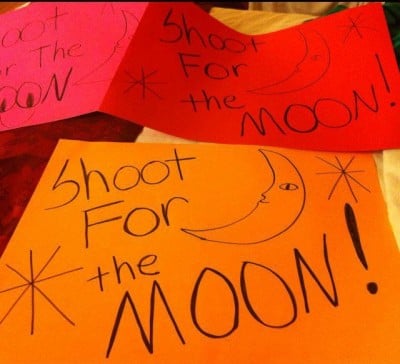 It was already four hours before the rooster crows when I got to my hotel the day they came in so I had to wait until the next night and pick up a bunch of poster boards in a little drugstore on my way back to the hotel. The waiting just about killed me. I got a giant marker and used my piteous excuse for artistic skills to make these…Pun on posters absolutely intended. 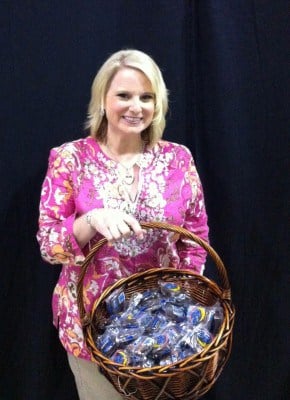 I sent a few to The American Bible Set next door…a hundred or so, give or take :). 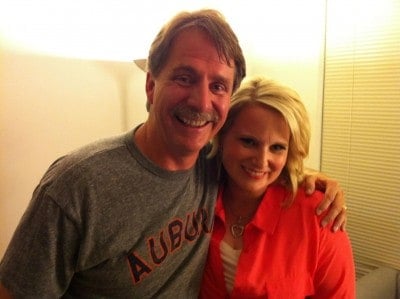 Later that day, I asked one of the producers to take me over to Jeff’s set during their break (it’s not a place you can just waltz into).

“ARE YOU THE ONE WHO SENT THE MOON PIES?” was the first thing he said.

Seriously y’all, in the South, food will get you everywhere.

Now while you’re here, I’m gonna tell you something about Jeff Foxworthy. Because I have a strong belief that when we have something nice to say about people, we should say it. Jeff Foxworthy is a good man, with deep roots in who he is and what he knows to be true in this world. On the day I met him, he and I sat in a green room with a pretty high power in the film world and Jeff and I were talking about how God had brought us to where we were. The higher up interjected and told us both that we didn’t owe anything to God for being there, the he was the one we should really be grateful to. “You have no idea you’ve been used.” I said with a smile, and Jeff immediately spoke up by throwing his strong but compassionately worded two cents in as well. This is a good man who knows what he knows and will not be swayed by money, power, or ego. Considering how many opportunities he has had, that is really saying a lot.

I don’t think it is possible to know what it’s like out there unless you’ve been there. I’m not talking about California. I’m talking about the tv world. If you don’t know who you are going into it, it’ll twist you up in ways you can’t even imagine and spit you out looking like a wanky jawed pretzel when you’re done.

I’ve seen some truly wonderful people in that world and worked with some of the best, but I’ve also seen some very famous folks who had been turned into train wrecks behind the scenes. I was working with this one big deal tv guy one day and craft came on set with the food, which he started to eat but stopped and turned away instead. I chided him, “You need to eat something! You’re too skinny!” and he looked at me in all seriousness and said “I can’t eat. You can never be too young or two skinny in tv and I’m battling both.” My heart just ached at the look of hunger and desperation in his eyes, and it wasn’t hunger for food, either. You just don’t know until you’ve seen it, what that industry can do to people.

Jeff is a man who knows where he comes from and realizes God has placed a purpose on his life, and he hasn’t forgotten that. That kind of root system and foundation is what you have to have in order to be successful in life, whether it is being a tv star or working a minimum wage job.

Okay, I’m done with my rabbit trail now so I’ll bring us back around the bend by saying that Jeff also has an appreciation for a moon pie… 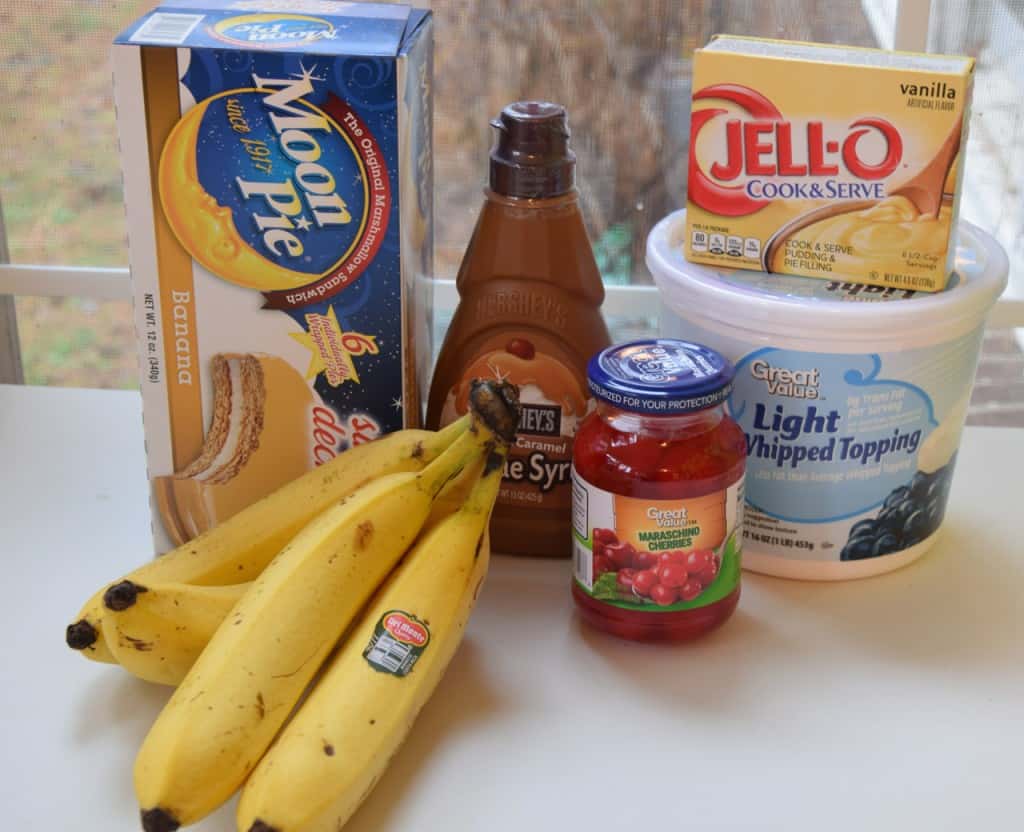 You’re gonna need: Moon Pies*, Bananas, Caramel Syrup, Cook & Serve Vanilla Pudding*, Whipped Topping, and maybe cherries. I ended up not using the cherries but I was planning on garnishing it with them. It was pretty enough on it’s own.

In case you haven’t guessed, I was making this recipe up as I went along and taking photographs in case it turned out awesome. It did. I’m not bragging because it wasn’t me. It was these great little ingredients you see above – and the Moon Pies. Moon Pies make many things awesome, including childhoods. They used to call an RC Cola and a Moon Pie “the working man’s lunch” because they were cheap, filling, and gave hardworking men the energy to get back to it.

Stupid disclaimer because this is 2015 and we have to have stupid disclaimers thanks to the internet: Of course, I’m not saying that this was healthy but there are times when you have to do the best you can. While I’m at it, I’ll toss out there that this cake isn’t healthy, either and I am suggesting you eat some of it, not all of it, and don’t make it every day. This right here is a celebration dish!

*Moon Pies: I am using Banana because they are one of my favorites. My second favorite is vanilla and chocolate comes in as third. There are a gazillion different flavors of these things now but I tend to stick with the classics. Any flavor you want works perfectly well in this cake. So go with whatever cranks yer tractor.

*Pudding: Hey, it’s still a moderately free country so there are options here as well. If you want to make this pudding from scratch, just use my recipe for the pudding in homemade banana pudding by clicking here. You can also use the cold instant pudding but I am using cook and serve because it is a happy medium between the two and I really want that warm pudding to permeate the moon pies and help them stick together a bit in my finished product.

Now who noticed that I took a box of moon pies and a bottle of caramel and added “light” whipped topping? heehee. It’s kinda in line with Mama’s principle of drinking a diet coke with a Krispy Kreme doughnut. 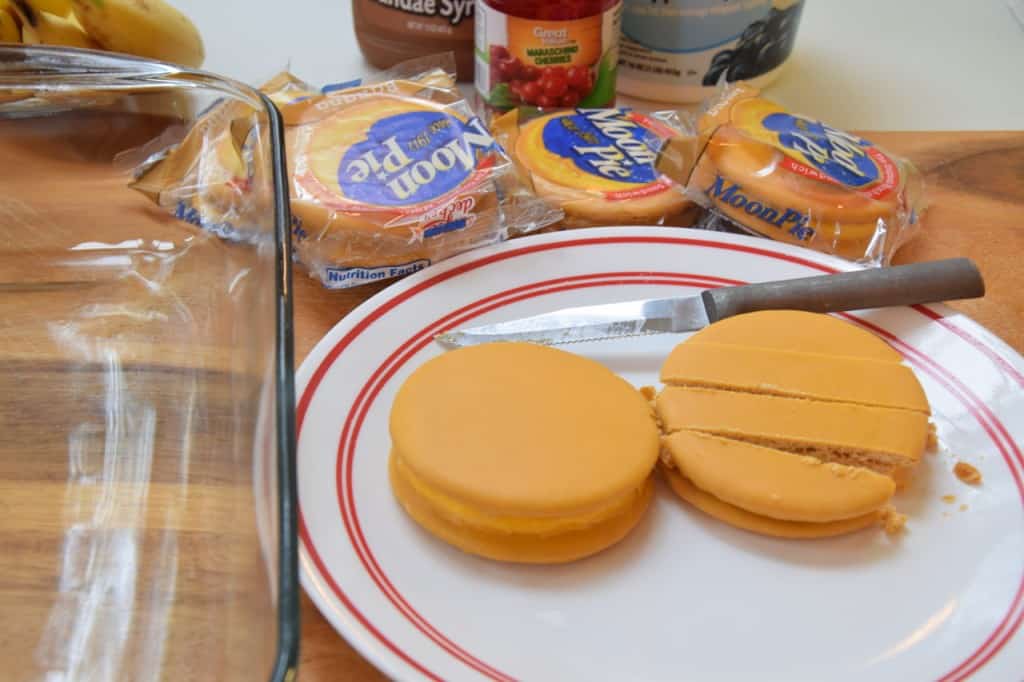 To start with, unwrap six or seven moon pies (A box contains six but it takes about 7 to fill the bottom of my 9×13 dish) and cut them into four strips each like this. 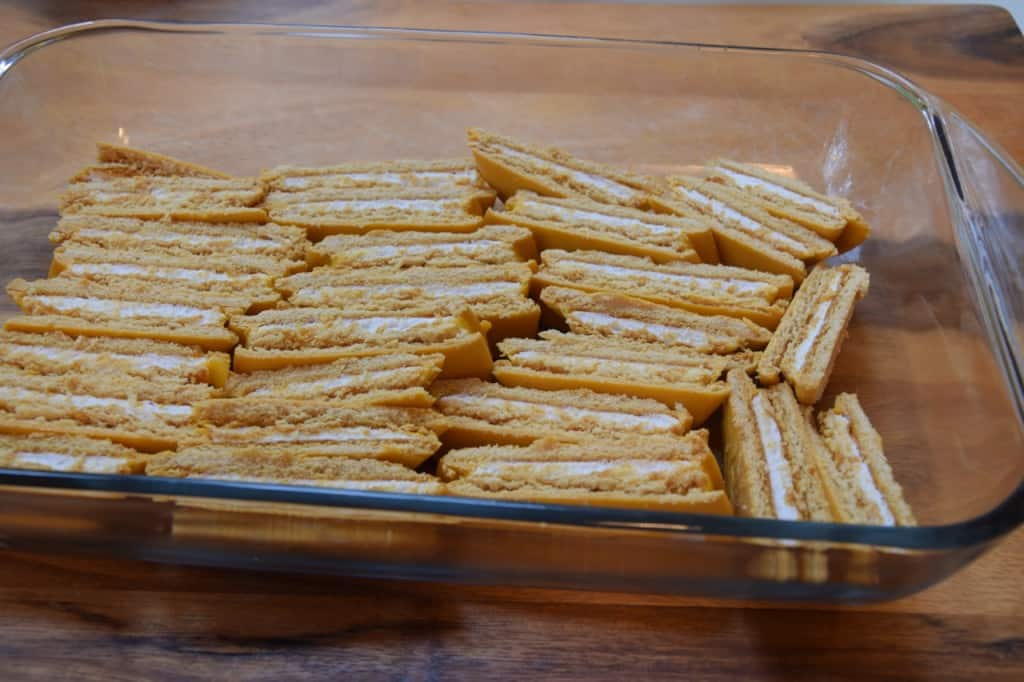 Arrange all of those strips, cut side up, in a baking dish.

I know you’re thinking “But aren’t all of the sides cut side up?” Well. kinda, but you know you have those end pieces…. 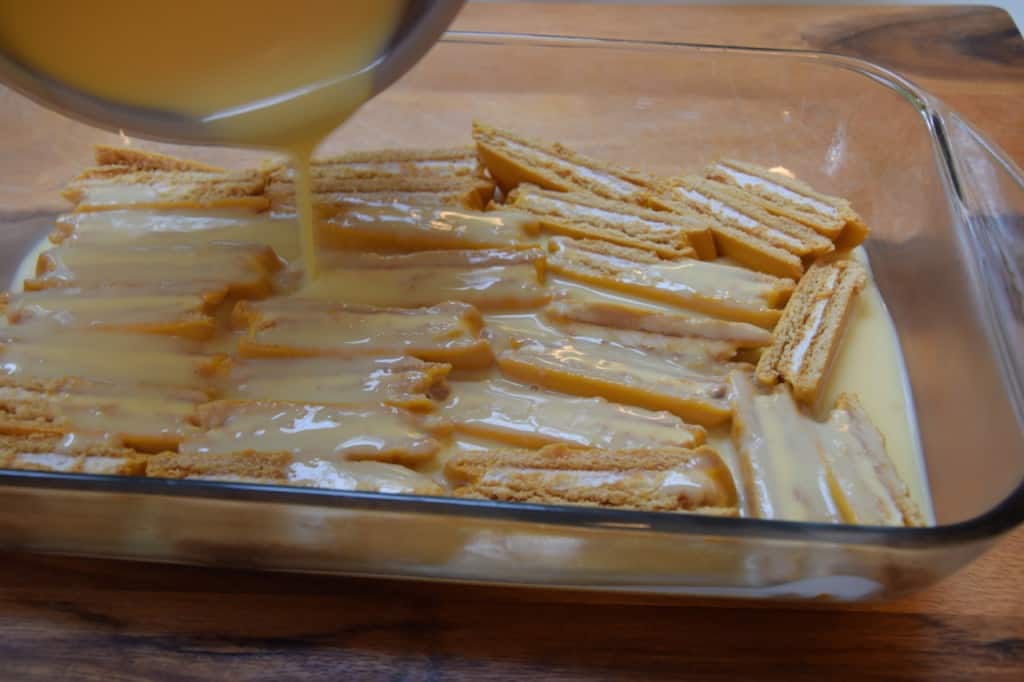 Cook your pudding according to package directions (or make homemade using this banana pudding recipe – minus the bananas and wafers of course) and pour it over the moon pies. 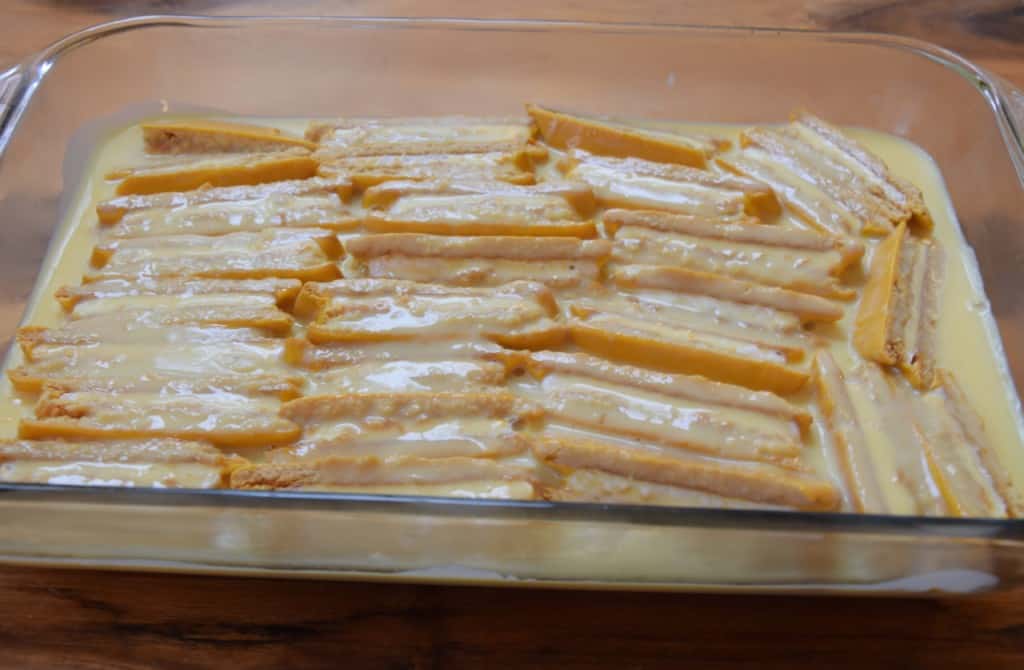 Aww, look at ’em. All comfy cozy, relaxing in a pudding bath… 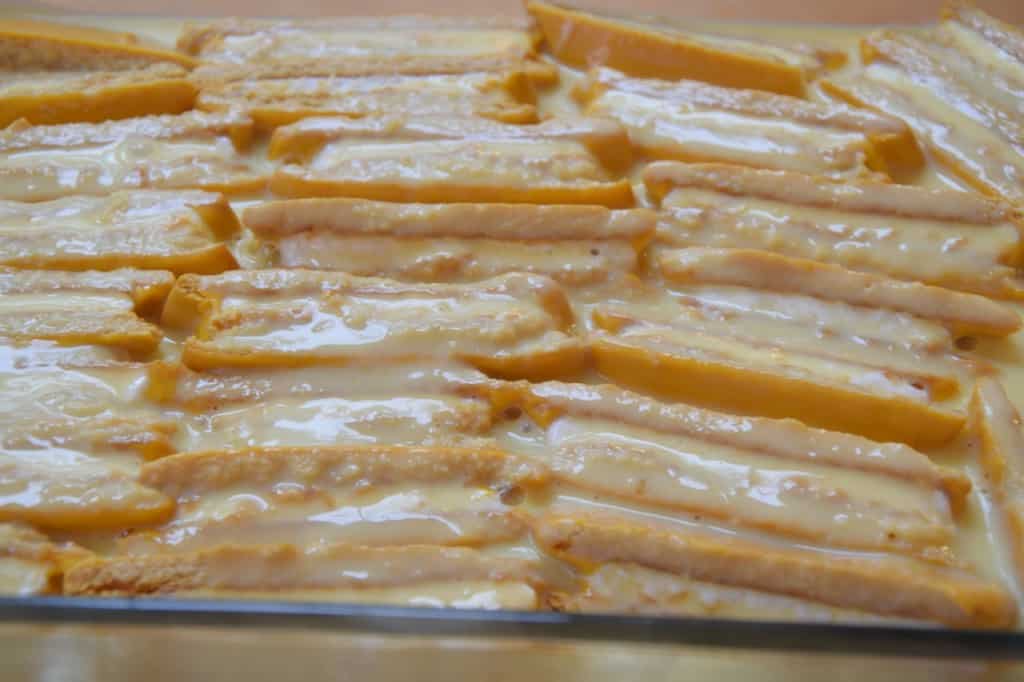 Now cover this with foil and refrigerate it until it is cold. I just made it in the evening and let it sit in the fridge overnight.

And the next day…. 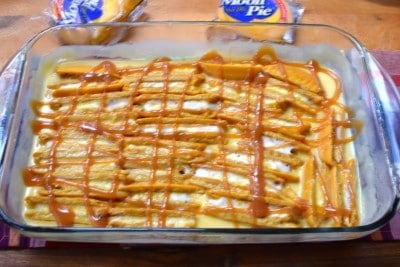 Take your caramel and do a generous zigzag over the moon pies.

This zig was not zagged generously enough because the caramel MADE this dish so zig your zag with more gusto than I did, k? 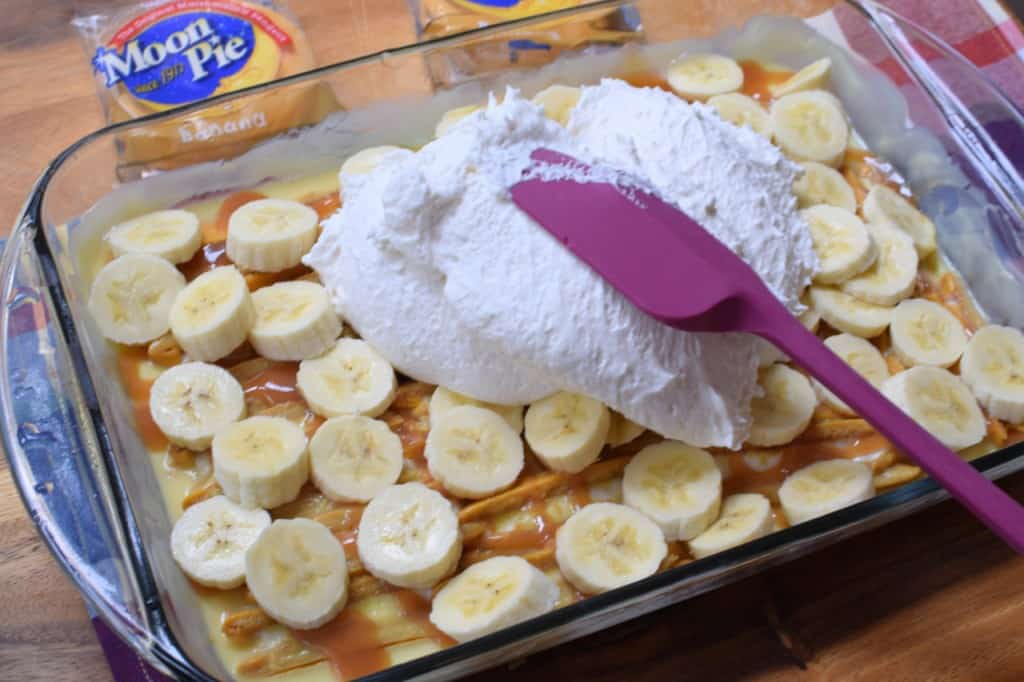 Slice bananas on top of caramel.

Spread that entire thing of whipped topping over it. 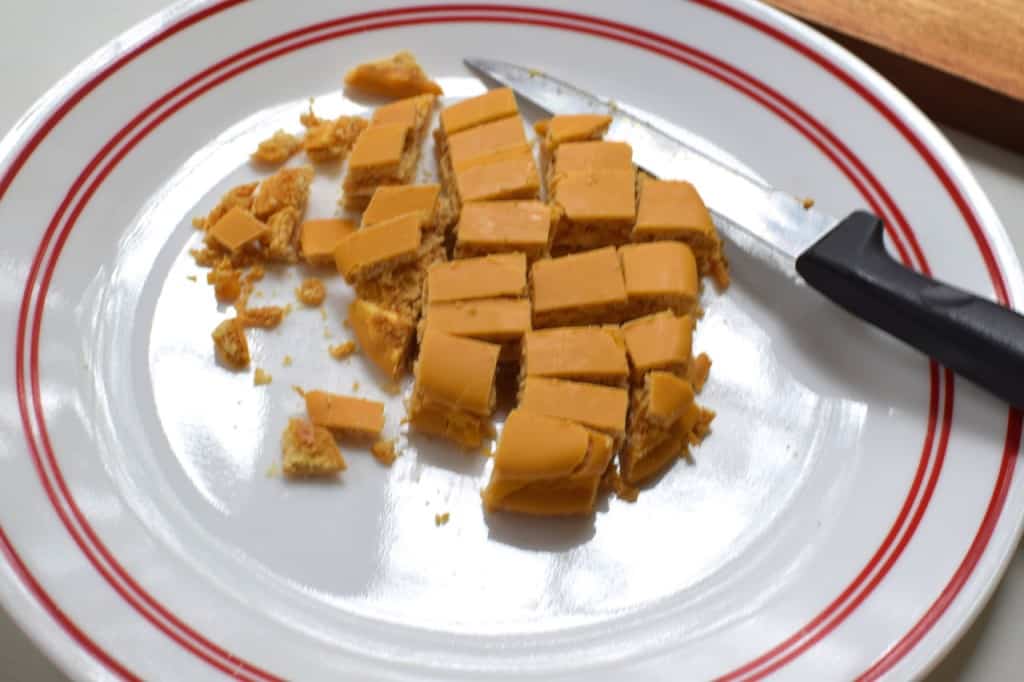 Now take another moon pie and cut it into smaller bite size pieces. 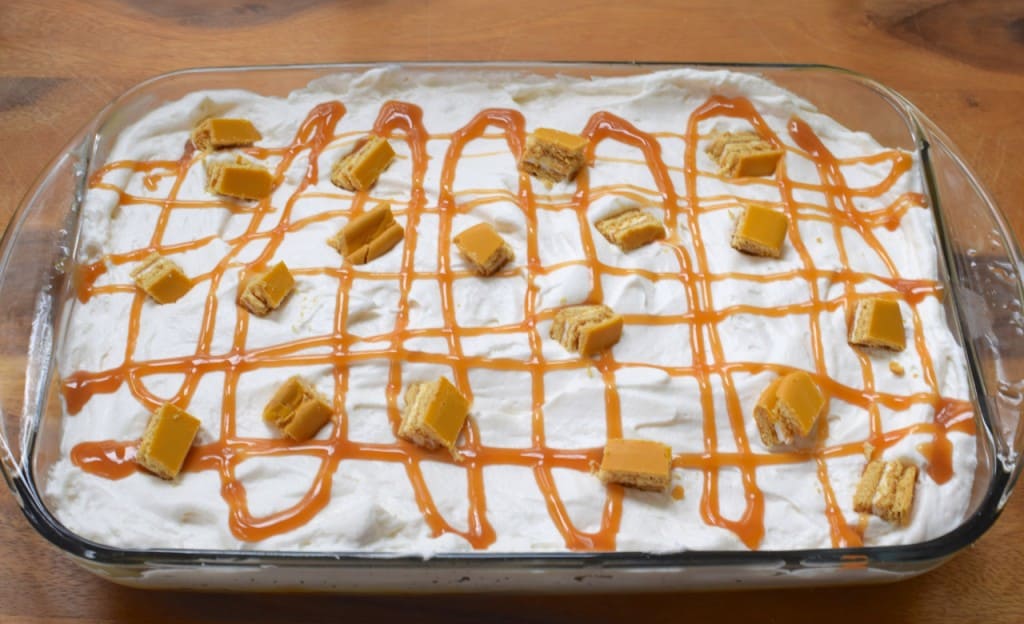 Zig some more caramel zags on top and sprinkle with the little moon pie pieces.

Okay, so I didn’t sprinkle. I placed. Do what your gut tells ya here. Either one still gives you a moon pie cake in the end and this puppy is FABULOUS!

This is a surprisingly light tasting dessert that isn’t as kill you sweet as you think it is, but oh my goodness is it good!  The flavors compliment each other perfectly and you keep going back for just

Shoot for the Moon today 🙂

Do you have any special or funny Moon Pie Memories?

Have you never heard of a Moon Pie?

Let’s talk about it in the comments! 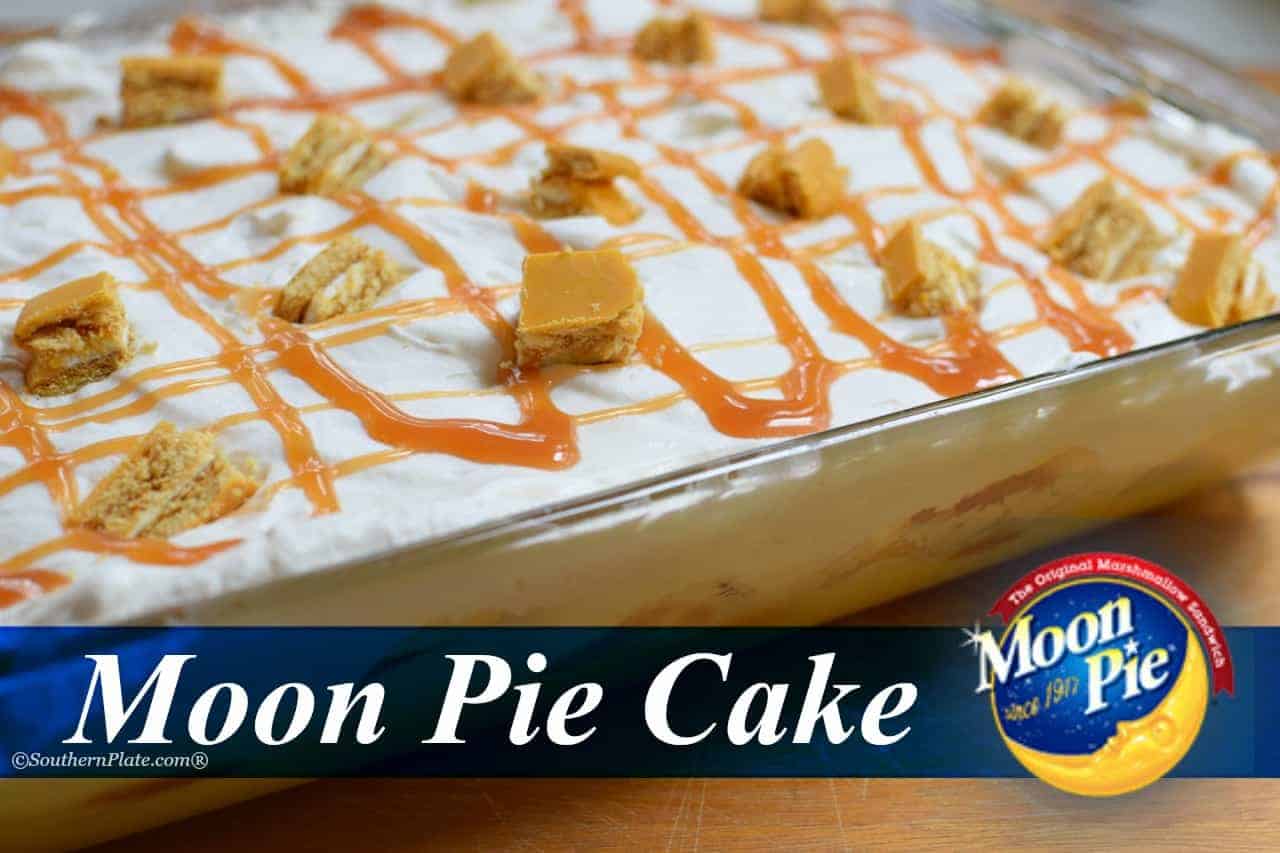 *I used Banana flavored Moon Pies but any flavor will work. Just make sure you get regular size. If you aren't familiar with them, they have Minis, Double Deckers, and I think even triple deckers. You could use the double and triple deckers if you like and it will take fewer to make this, but if you go with Minis it is gonna take a whole lotta moon pies... *For the pudding: I have listed other options (homemade, etc) within the body of my post. 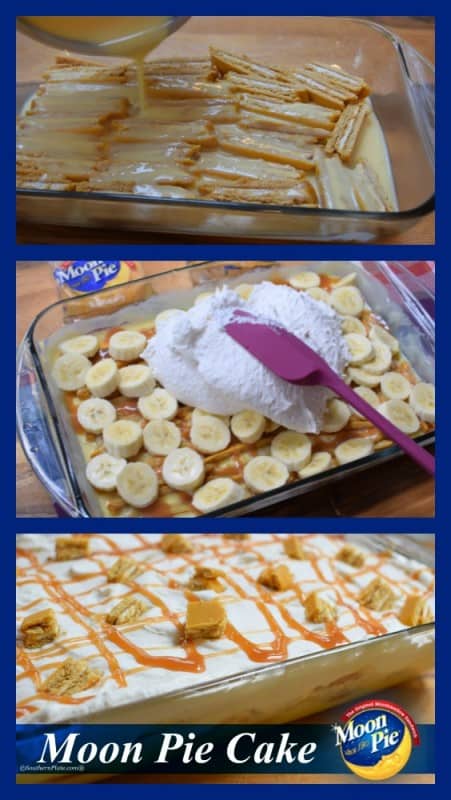