Here’s an ole-fashioned holiday sweet treat all kids (and adults) will love, it’s our peanut butter potato candy. Instead of tasting like potatoes, it tastes like soft fudgy goodness! 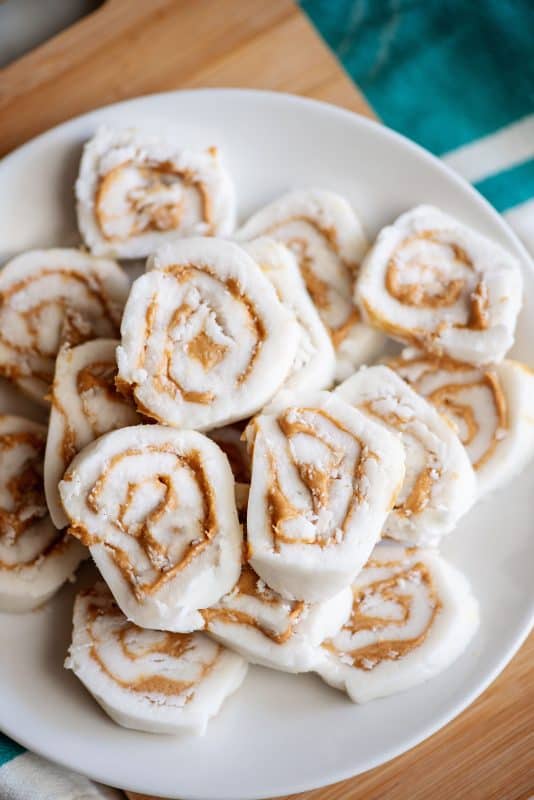 This recipe for potato candy is an ole-fashioned candy recipe that I’ve received a lot of requests for. A traditional holiday treat, in the past, my grandmother would divide her dough into two batches, tinting one pink with red food coloring and leaving one white. She’d then pinch off bits of dough and roll it into balls, storing the balls in the refrigerator until ready to serve. Another option is rolling out little balls of potato candy and dipping them into melted chocolate to serve as a sort of poor man’s bonbon. However you make your potato candy, they’re guaranteed to be delicious!

Now, if you’re thinking potato candy sounds weird, I totally see where you’re coming from. However, I’m gonna let you know what to expect instead: old-fashioned candy heaven. For me, this peanut butter potato candy is in the same taste category as fudge or divinity. Yes, it is just that good! I promise that once you give this recipe a go, you won’t be disappointed. Plus, you won’t even be able to taste the potato. It just acts as a binder, binding the other ingredients. 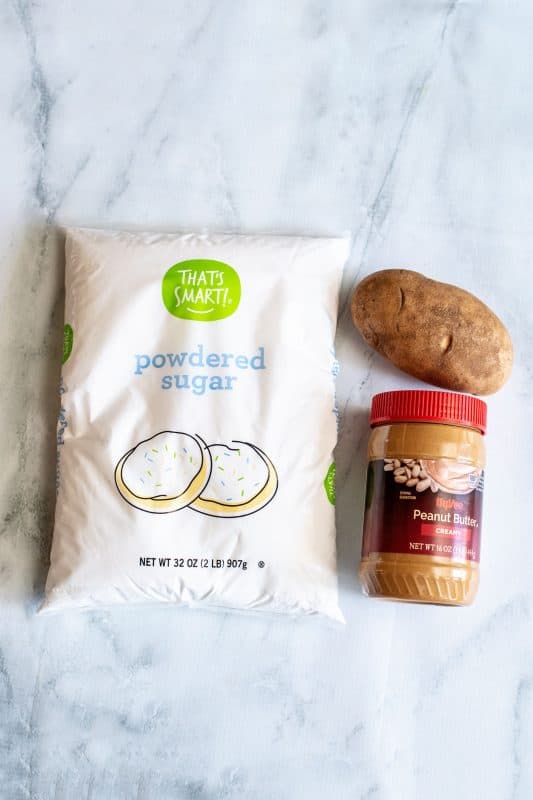 There are many things to like about this simple no-bake peanut butter potato candy recipe, including the fact it’s gluten-free and you only need three ingredients! 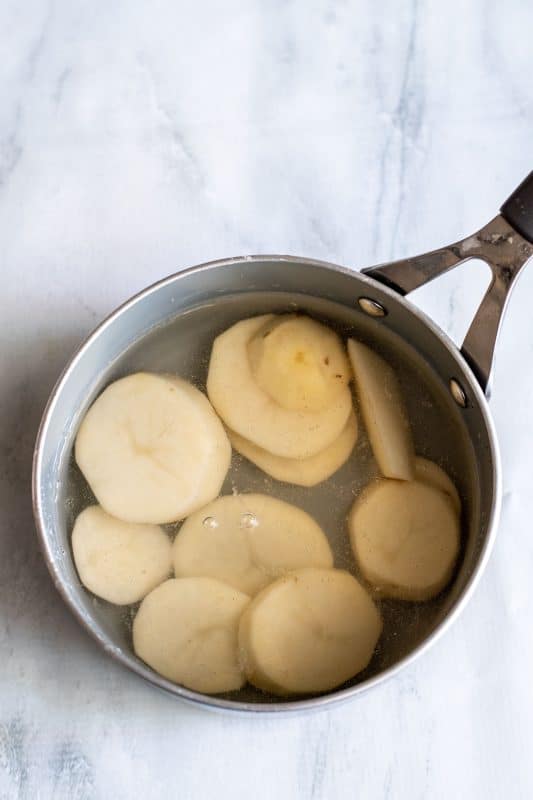 Peel and slice your potato and cover it with water. 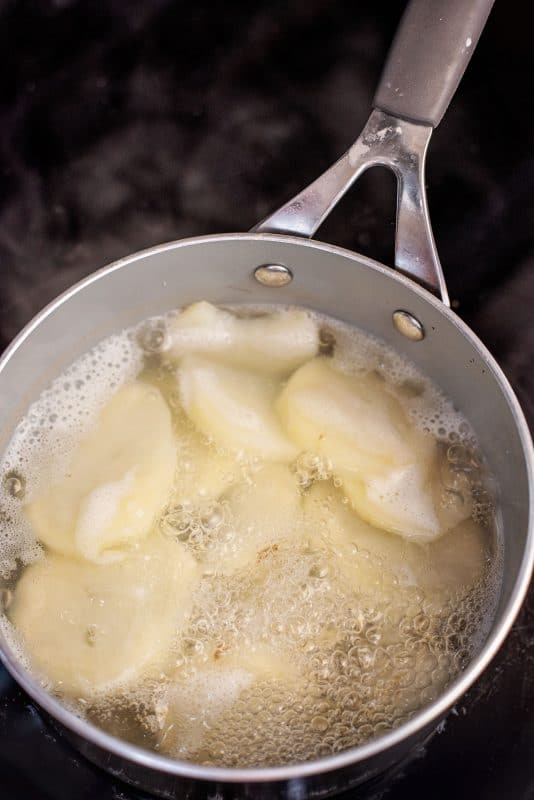 Bring to a boil and cook until tender. 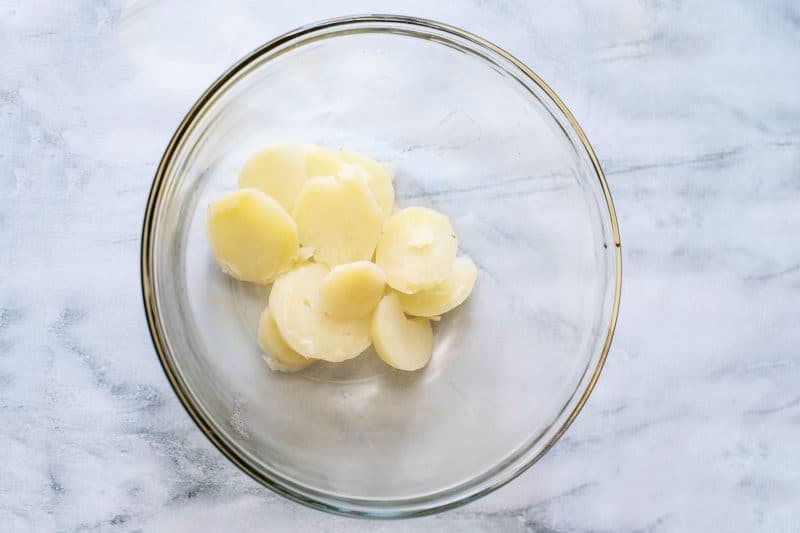 Drain your potato water and place the cooked potato in a mixing bowl. 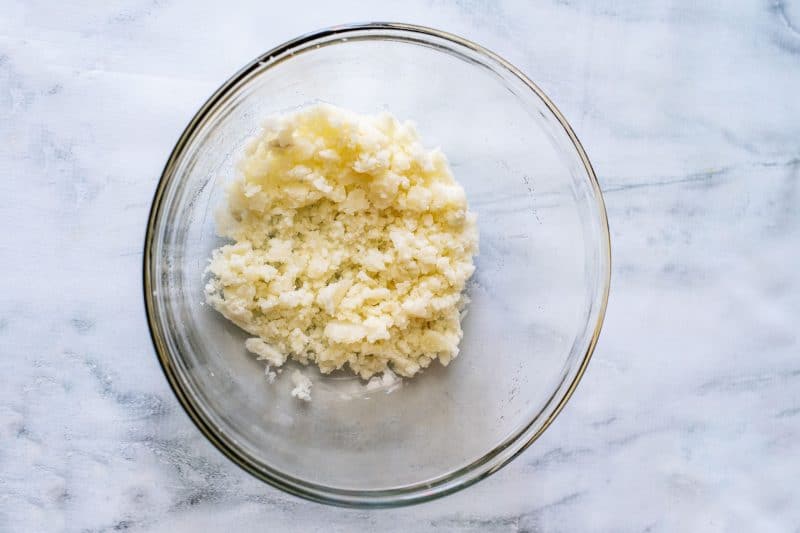 Beat it up real good until it looks like mashed potato. 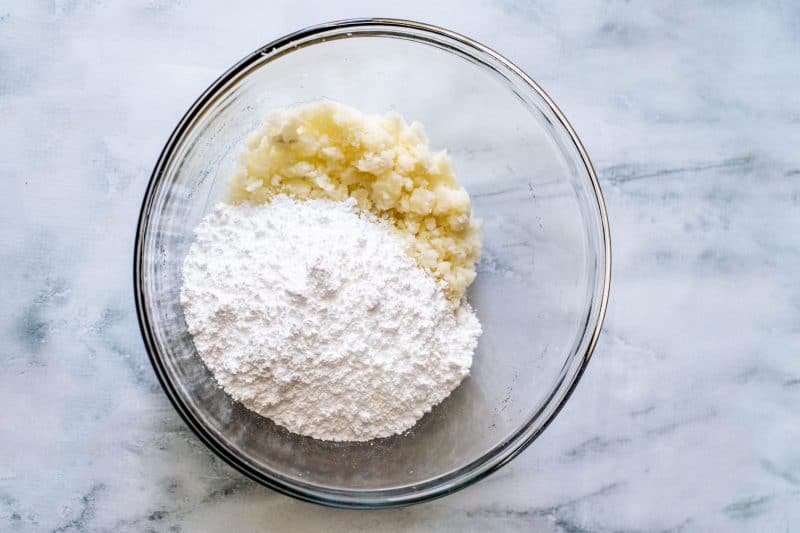 Add about half of your confectioner’s sugar and mix it up well again. 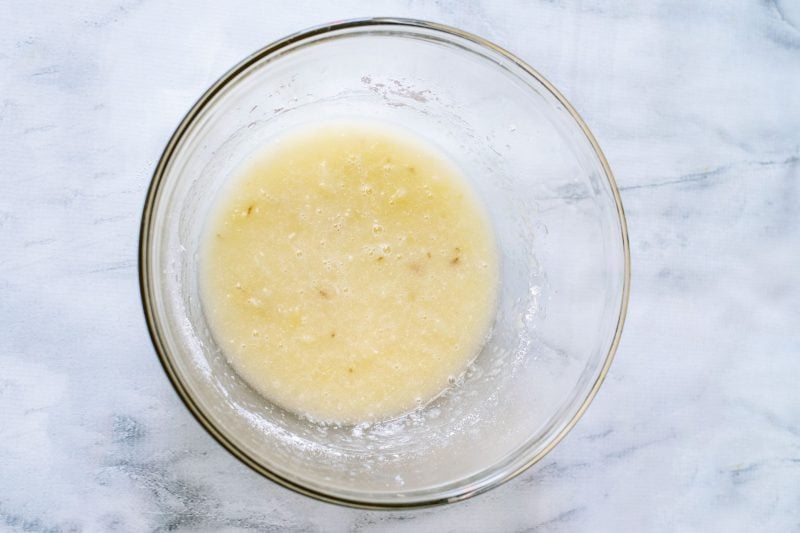 Until you have a pulpy, liquidy mess. 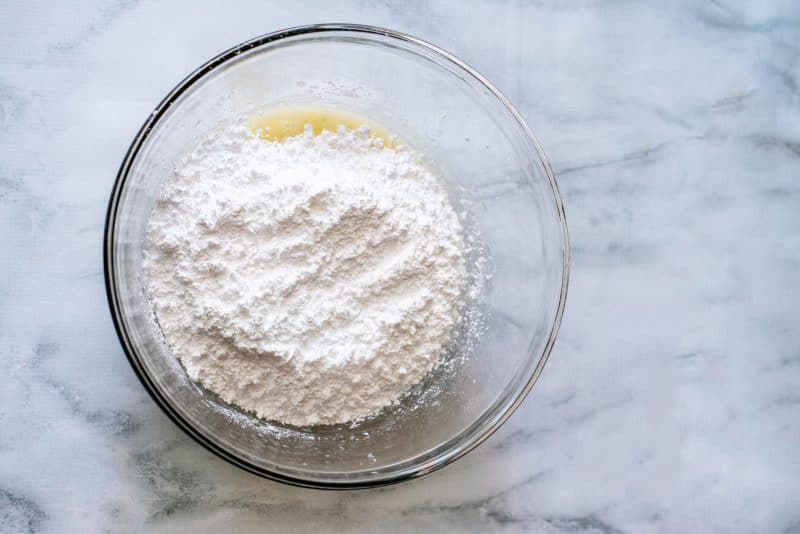 Dump in the rest of your sugar.

Sure you can add it in gradually if you have all day, but it’s just as good to dump it all in there and get on with making some candy. 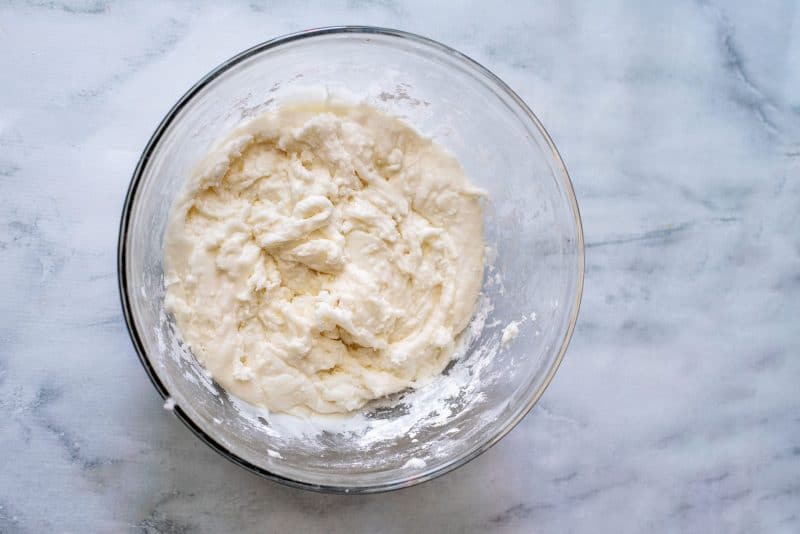 After that second mixing, you’ll have yourself a good stiff potato dough. It should be the consistency of cookie dough, only maybe a wee bit stiffer. 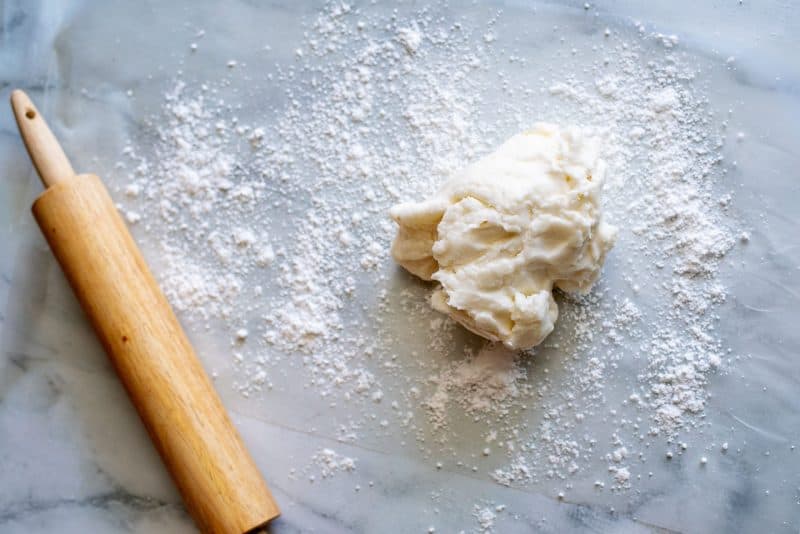 Now, because we don’t have all the time in the world to clean our kitchens and because we want this to be as easy as possible (so we enjoy it more, of course!), place a big old sheet of waxed paper on your countertop.

If anyone is feeling particularly technical today, I think this is like… 18 inches longish.

Put some confectioner’s sugar on the paper to keep your dough from sticking like tar and dump your blob of dough on top. You’ll have to scrape down the sides a bit to get it all. 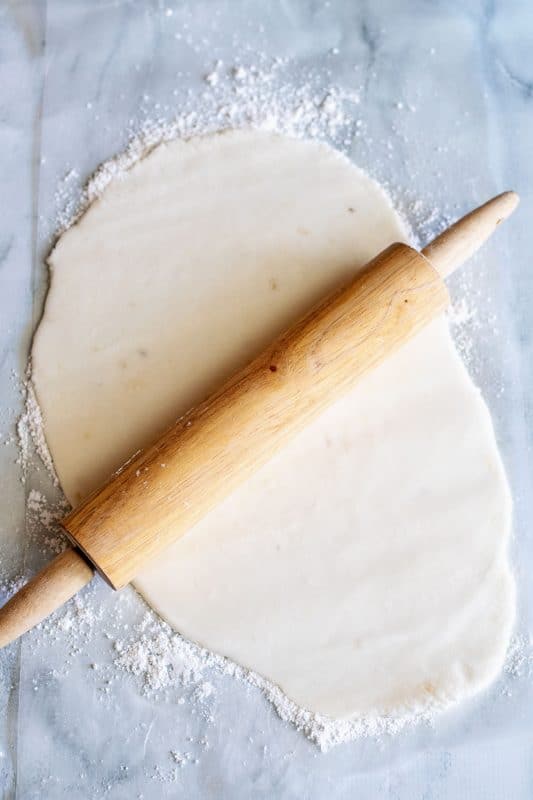 Dust the top with some more powdered sugar.

Roll that out until it is about a quarter of an inch. 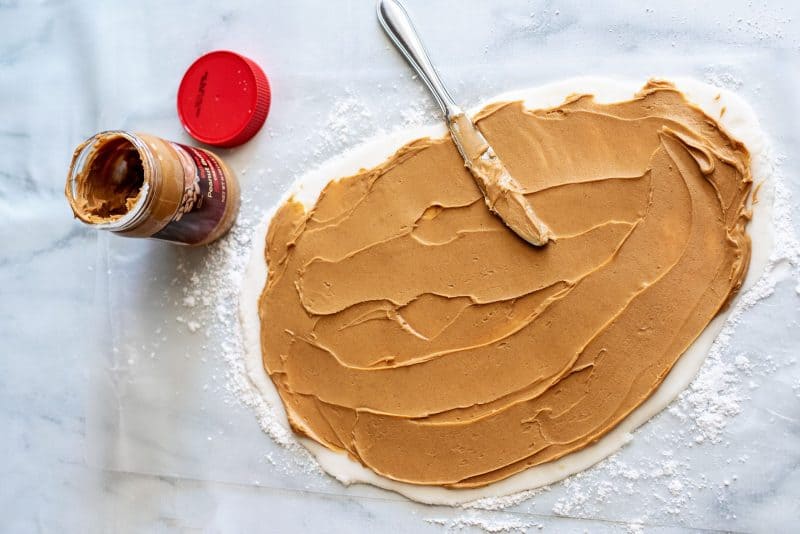 Smear some peanut butter on that.

I have no idea how much peanut butter you’ll need so just go with your gut here. You can do this because you are awesome! 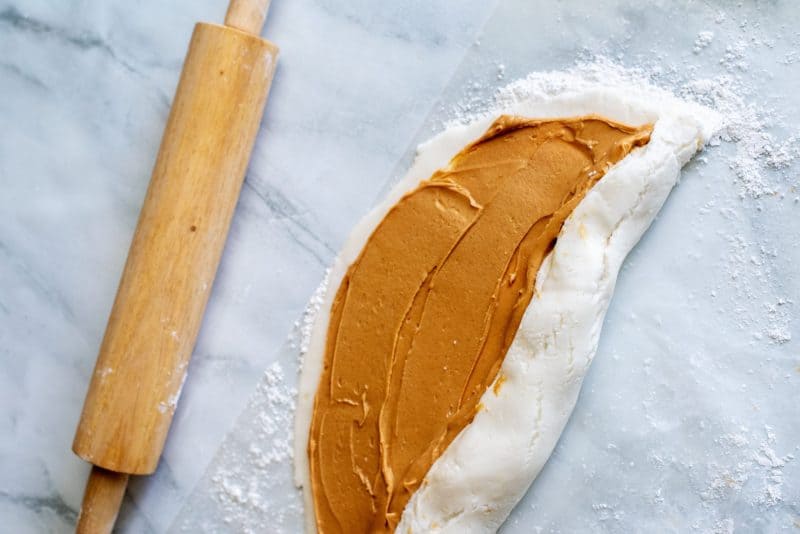 Now roll that up log-style, like you’re rolling up cinnamon rolls. 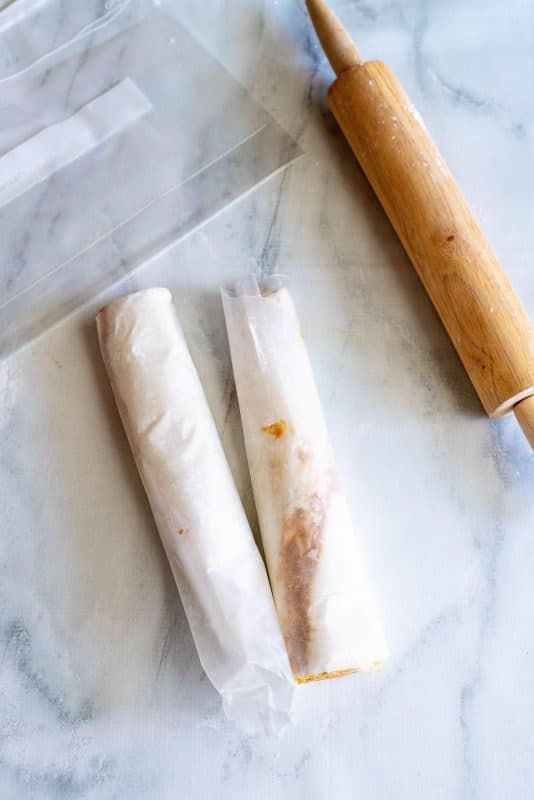 Now since we have the waxed paper already out there anyway, roll your log up in your waxed paper.

To make life easier, I cut my roll in half. 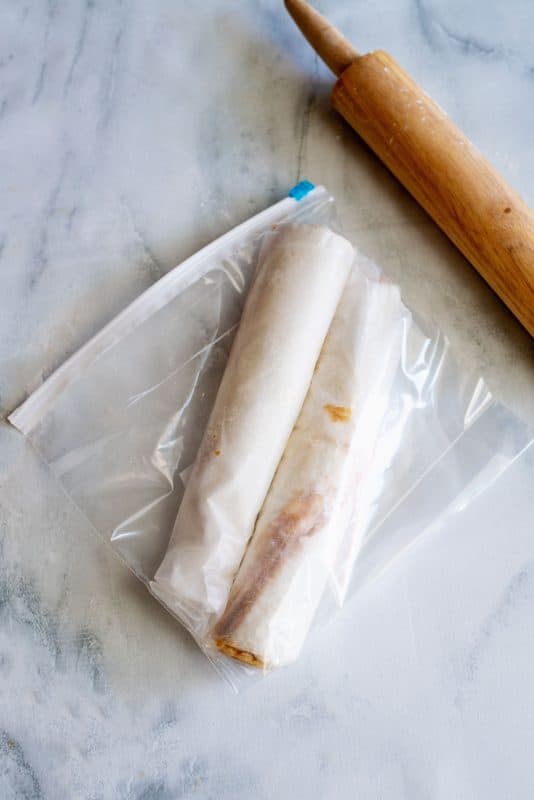 Then they will both fit in a gallon zipper bag. Place this in the fridge until thoroughly chilled. 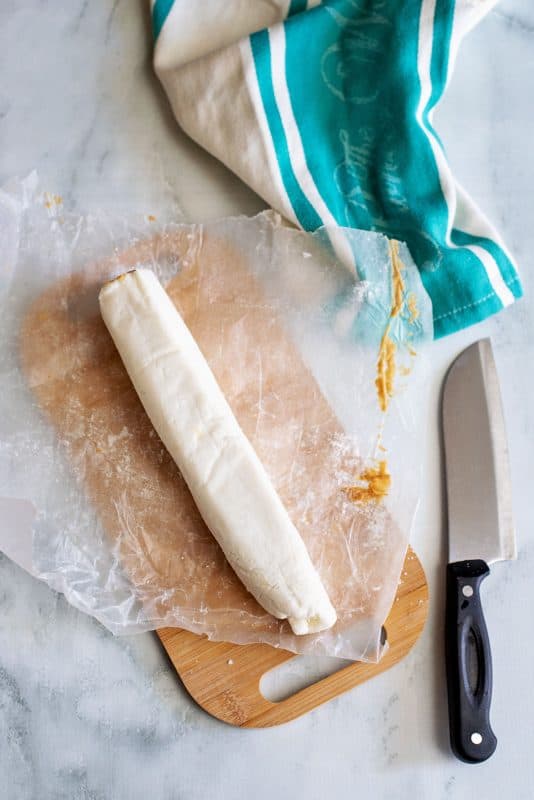 When ready to serve, remove waxed paper and slice it into inch-thick slices.

This recipe makes about forty pieces of candy.

Peanut butter candy can easily be stored in an airtight container or covered in plastic wrap in your fridge for up to 10 days.

Where did potato candy originate?

The actual origin of potato candy is unknown, with lots of theories. Some say it hails from Ireland, others say Germany. However, it’s believed to have originated in the South during the Great Depression. It would have been a tasty treat using the little number of ingredients available at the time. 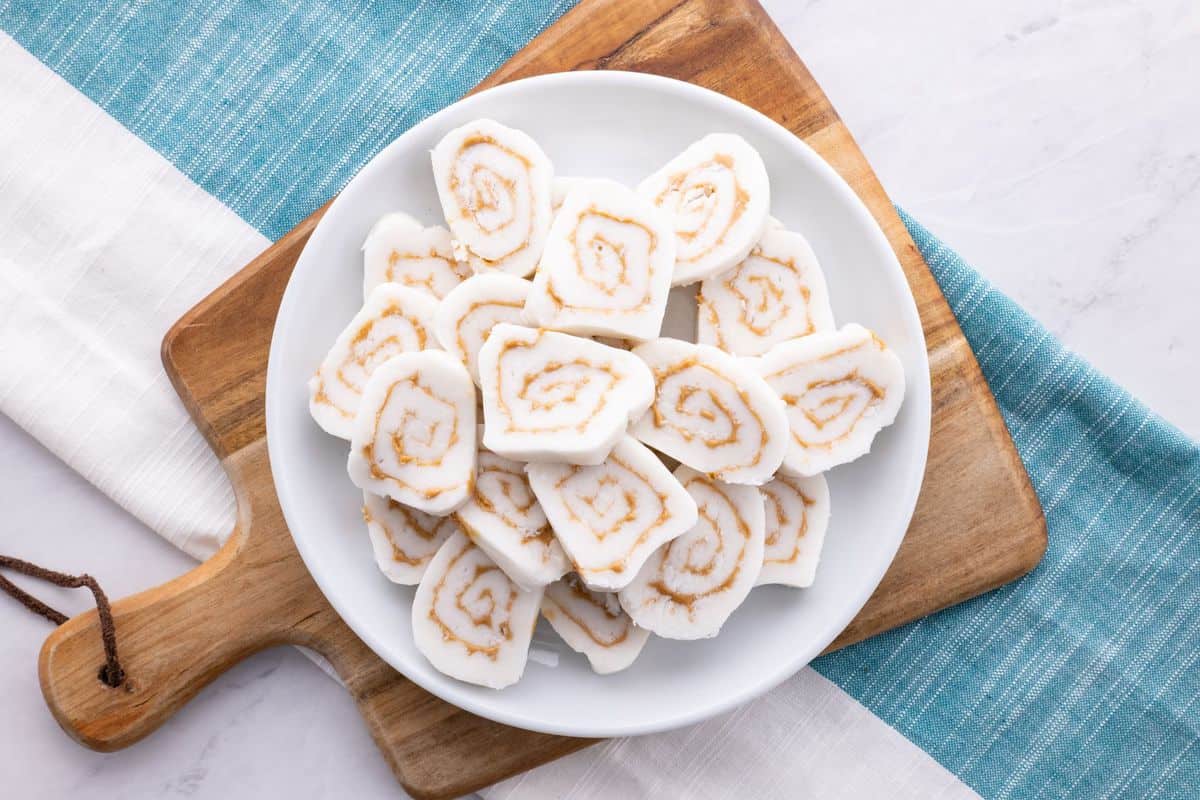 Please note: potatoes are different sizes. If you end up with more potato, you're gonna need more confectioner's sugar. We're gonna have to use our noodles on this one and be ready to add more confectioner's sugar if need be. You'll just end up with more candy. Work it in there until it becomes a dough. You might have to add a lot more sugar because you might end up with a lot more potato. You can do this. I have faith in you!

You may also enjoy these fun holiday treats:

Something about an old-fashioned Christmas is hard to forget.

I really wanted to make this recipe but unfortunately the ads blocked half the directions and 1 ingredient. After the 4th time of trying to get rid of the ads and reloading the page I just quit.

Hi Lesli,
the ads should never block the recipe. Is it the sign up for the newsletter popup? If you could take a screenshot and send it to contact@southernplaterecipes.com that would be really helpful. You can always x out of the pop up or ad so it doesn’t cover the recipe. And if it is an ad then I would really appreciate the screenshot so I can get that to the company and make sure it doesn’t happen again!
I want. you to have a good experience on the site.
Thanks ahead of time for your help!
Stacey Lynn

Our family loves this candy and we have been eating and/or making it for years!!! Thank you for the precious memories!!

You are so welcome. Warms my heart to know our recipes bring back such precious memories. Thanks for sharing 🙂

This is a sweet memory I’ll never forget. My grandmother use to make this and I can still see her in the kitchen. I’m now a great grandmother and I know all my babies are going to love this as much as I did. I make them so many goodies and this one had slipped my mind until today. Thank you.

I hope they love them Brenda!
Happy Holidays 🙂

Wow they look yummy going to try them this weekend .Be the first for me. Thanks have a great weekend Rick

Sorry I, really don’t think I’ll give this a try, as I think I just went into a “diabetic coma” with 2lbs of sugar. Wish I could have tho!!