Home » Side Dishes » Simple Squash – And Simply The Best Day Ever 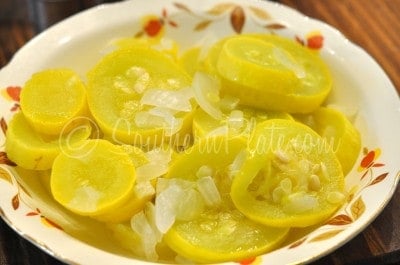 According to my kids, yesterday was the best day of their lives. Now if someone had told me that, my immediate question would be, “Wow, what did you do?” I’d be thinking Disney World or extravagant gifts, maybe a winning lottery ticket or two. But you know the great thing about kids, families, and humans in general is that though we often think it may take something big to create “the best day ever” it seldom actually does. Yesterday was the perfect example of this.

We had an uncharacteristically lazy day at Bountiful. Out of the four of us, not a soul was dressed til noon. I cooked a lunch of spaghetti made with tomatoes from our garden and we all sat down to eat together after our lazy morning, chatting about the upcoming school year over lunch and iced tea. Then we took our time getting ready and headed out to Sam’s Club to buy apples and coffee creamer (they have these Gala apples that are especially good right now and we use so much coffee creamer that we prefer the LARGE container).

As soon as we entered the store the kids started talking about the last time we’d come and the samples they’d gotten to try (there are a lot of sample vendors set up on weekends with the new foods) and we all set off at their urging to find the samples first. They were excited to get to try a new yogurt stick, vanilla yogurt, and samples of some newly arrived fruit. We wandered around the store a while and those apples, some bell peppers, juice, and a watermelon found their way into our buggy.

By now it had been about four hours since lunch and the kids mentioned being hungry. Ricky and I got to talking about how we didn’t have anything planned for supper to which they both chimed in with hopes of pizza and I said “You know, we could just eat here and let the kids sit at the little tables in the food court area.”

This casual suggestion was met with cheers of “YAY! We wanna eat here!” Apparently this had been a goal of theirs for some time as I’m always in a hurry to get home after we check out and my kids, unbeknownst to me, had been longing for a leisurely sit in the Sam’s Club food court.

This was just too easy.
So we ate a supper of gargantuan pizza slices and oversized foam cups of tea while we talked some more about school lunches and such.
Then headed out to load our groceries in the car. When we left though, I turned out of the parking lot in the opposite direction of home. “What are you doing?” Ricky asked. “I’m about to make this day totally rock for the kids” I answered with a cryptic grin.  A few minutes later I heard more cheers as I pulled into an automatic car wash.

I stopped for the attendant to brush down the front and back  of my car with a sudsy broom as the kids watched in wide grinned wonder. He couldn’t help but see the faces pressed against the windows and he playfully slung suds at them, sending them into torrents of laughter. The other attendant motioned for me to pull up and line my car up with the track and then handed me two green suckers through the window for the kids. You’d think it was their first sucker at how tickled they both were.

In their eyes it was as if the entire universe had set aside today to give them the royal treatment all the way.

We drove through the car wash amid giggles and oohs as they waited for each new phase, their faces bright and happy with joy. As we pulled out and headed towards home they were quiet for a few minutes, until Katy pulled her sucker out of her mouth with a sigh of satisfaction and said “That was the best day ever.”

Brady joined in with his own satisfied sigh, “Yeah, it really was.” Then they both turned to watch the trek home out of their windows.

Sometimes it really is the simple things

So that is how I’m going to show you how to cook squash today. The simple way. 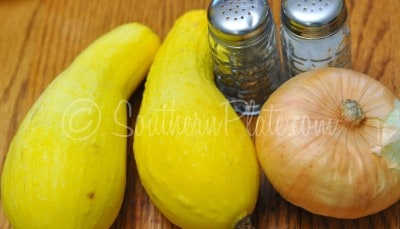 This is one of those recipes where you can make as much or as little as you like.

I’d suggest 1 squash and 1/4 onion per person. I’m going to use half of this onion. 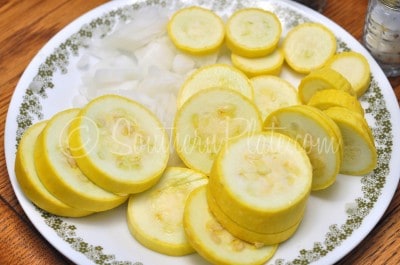 Chop your onion and slice your squash. 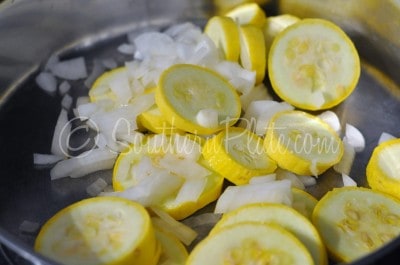 Place them both in a large skillet.

I’m showing you how to do this on the stove top but I have instructions on how to do it in the microwave at the bottom as well. 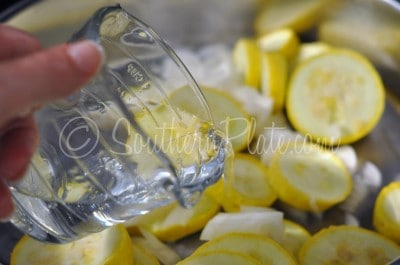 add about a cup of water, just enough to cover the bottom of the skillet. 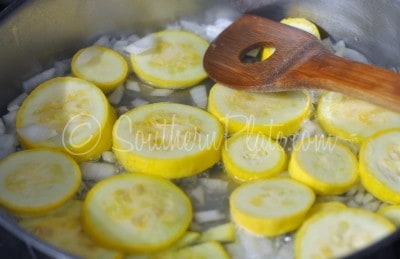 Now at this point, you can add about a tablespoon of bacon grease if you want to add in a bit more flavor. I’m just leaving mine water though because I dearly love the flavor of the squash on its own and the onion is compliment enough for me today.

Sometimes I do add bacon grease though, totally up to you.

Place on medium high heat just until the water in the bottom of the pan is gently boiling, then reduce heat to medium. 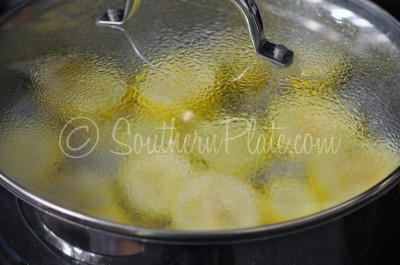 Put the lid on that and let it cook over medium heat for about ten minutes, or until the squash and onions are translucent 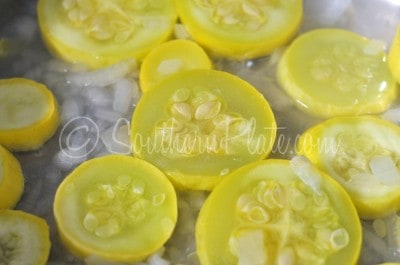 Now see this is a photo of some squash translucent and some not. See that squash in the center?

That one is done, stick a fork in it and eat up right now if ya want! 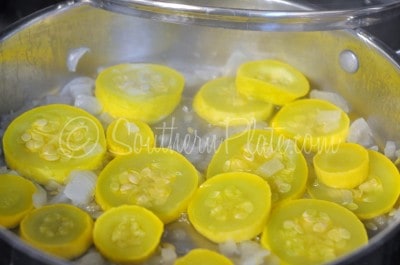 There, all done! Now we just gotta get them out with a slotted spoon to drain the water, place them on a plate and salt and pepper them!

Isn’t it pretty in this Jewel Tea bowl?

Salt and Pepper according to taste and you’re ready to go! 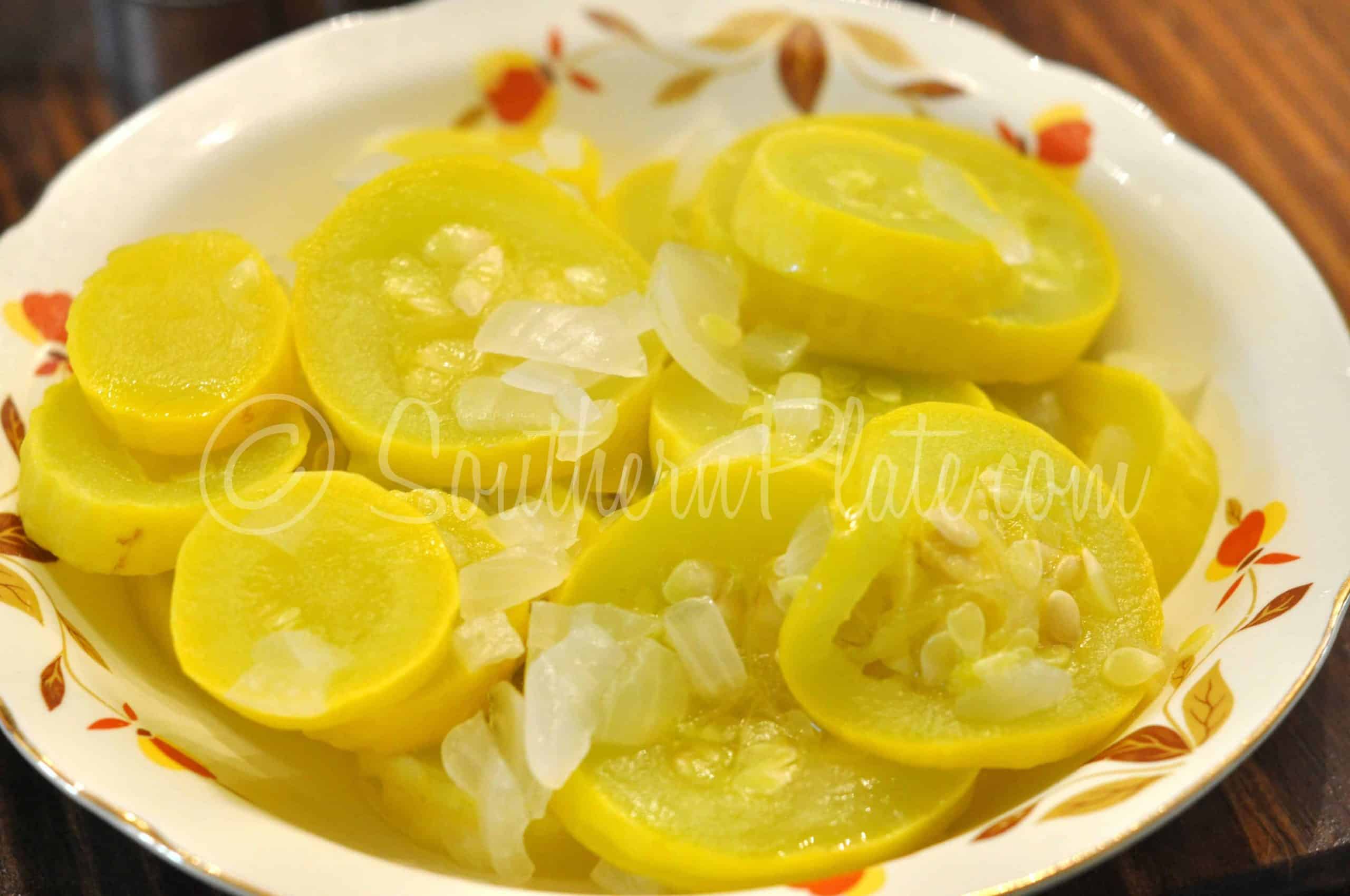 Place squash and onion in microwave safe bowl. Add water. Cover with cling wrap and microwave on high three to four minutes, or until translucent. Drain water and salt and pepper to taste.
Tried this recipe?Mention @southernplate or tag #southernplate!

Place squash and onion in microwave safe bowl. Add water. Cover with cling wrap and microwave on high three to four minutes, or until translucent. Drain water and salt and pepper to taste.

My squash casserole recipe may be found by clicking here.

Happiness is where you find it, seldom where you seek it.

Made this tonight with my new automatic steamer, had pork chops, mashed potatoes, gravy and this squash recipe. It was so good I ended up eating some potatoes and gravy and several helpings of squash, did not need the pork chop. Loved this but then have loved the recipes that you have posted on here. Squash is my new vegetable…..thank you

I love recipes where you can cook “as little or as much” as you like. I leave alone but want to cook more when my children come home.

The bacon grease really amps up the flavor, and the calories, but it’s a vegetable so in my mind, that kind of cancels out the bacon grease calories. Yes, I do use butter as well. My family likes it almost “mushy” and, of course, browned like the suggestions above. My lovable Yankee husband adores this recipe as well.

Jessica, from the very first sentence of your comment I just knew you were good people… 🙂

Bacon grease adds depth. I agree cooking and getting to golden stage is much tastier. I like mine fully cooked and squished

Ok guys.. can I CAN this please?

I never have, but I bet it would work.

I lovely. Yummy. But can I CAN it please

Dill weed and squash and onions just naturally go together. Since I have a difficult time growing dill, I used dried – from Penzeys of course.

Thanks for giving it a try!! So glad you liked it!