These pan-seared pork chops are seared in butter, infused with rich chicken broth, and topped with a mouthwatering velvet cream sauce. They’ll never believe how simple this recipe actually is! 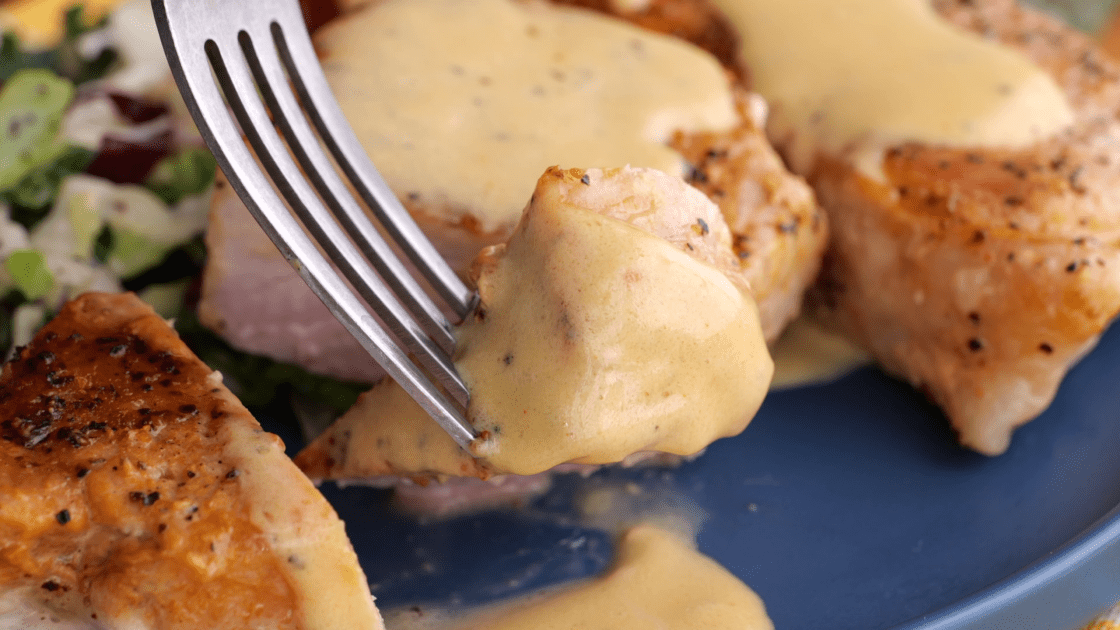 My husband doesn’t like gravy. Many of you who have been with me a while may remember me mentioning that from time to time. Although, after 17 years of marriage, I’ve learned that he really isn’t as opposed to it as he thinks he is. At some point in his life, “gravy” was tasted and terribly disliked and so the term itself always brings a slight flinch to his face. As a result, I have learned to use the word “sauce” in its place. A simple vocabulary switch and everyone is happy.

These juicy pork chops make him doubly happy, though. He asks for these things about as often as Katy asks for chicken and dumplings, and we have been known to have them twice in one week when Ricky manages to get a particularly pleading look in his eyes. Fortunately, the recipe is simple as can be, which is surprising once you taste the amazing flavor, they are unlike any other pan-seared pork chops you have had!

All you need is 6 ingredients: boneless pork chops, butter, heavy cream, chicken broth, and salt and pepper for the dry rub. Once you sear the seasoned pork chops, you simply make the sauce. This pork chops recipe is complete and ready to serve in under 30 minutes. I bet that piqued your interest! Keep scrolling for some great serving suggestions.

This is a deeply satisfying pork chop recipe for a number of reasons, including the layers of flavor, the richness of the sauce, and the tender pork beneath it all. 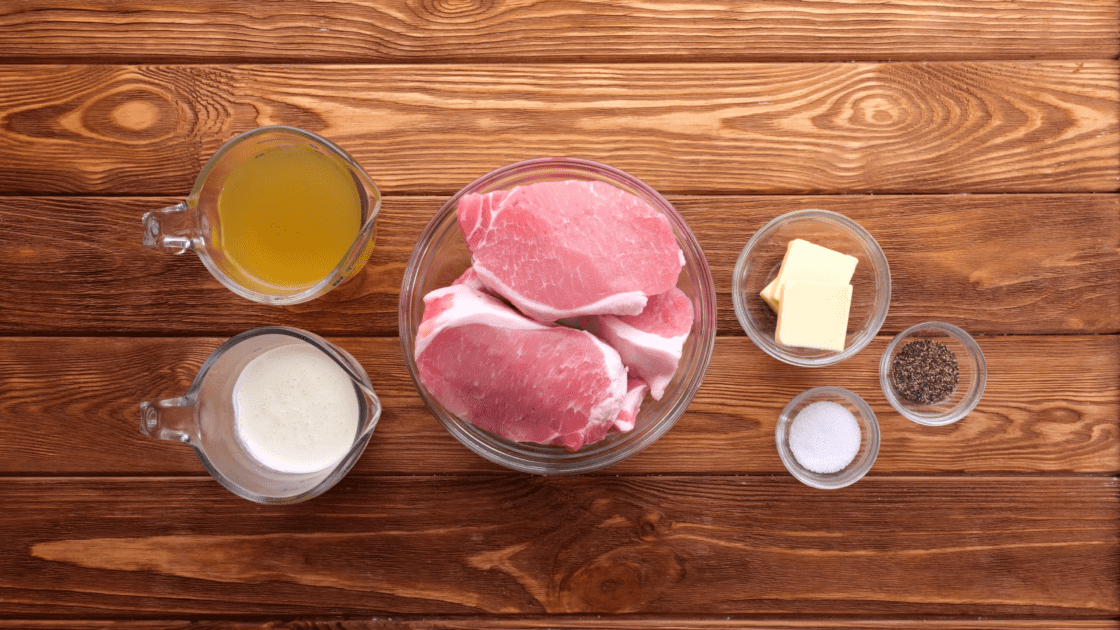 How to Make Pan-Seared Pork Chops With Cream Sauce 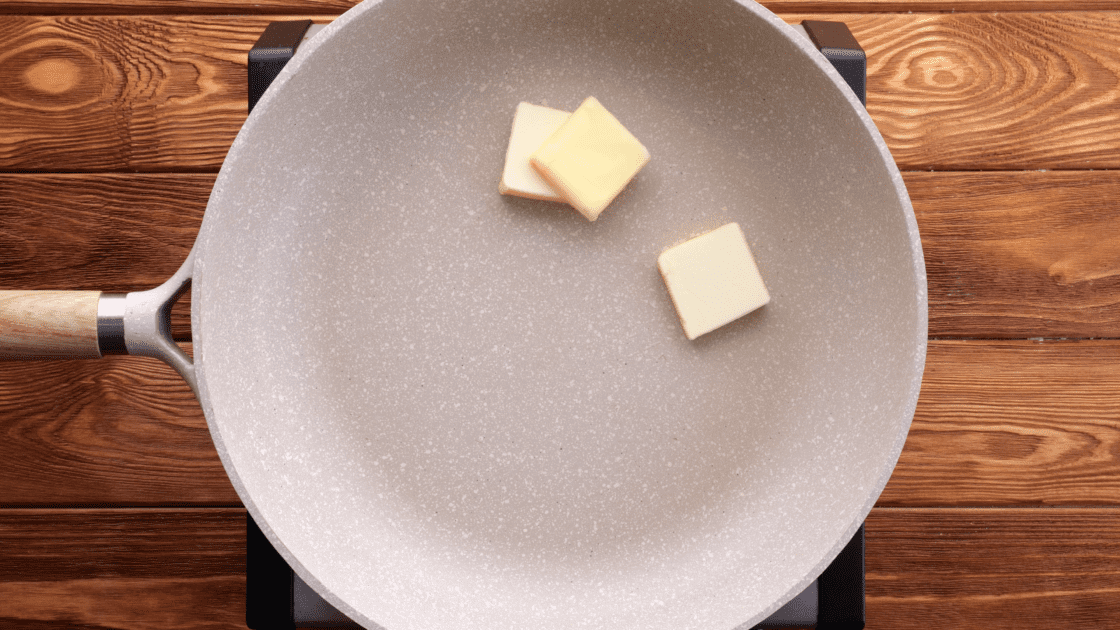 Melt a little butter in a large skillet or cast iron pan over medium-high heat. 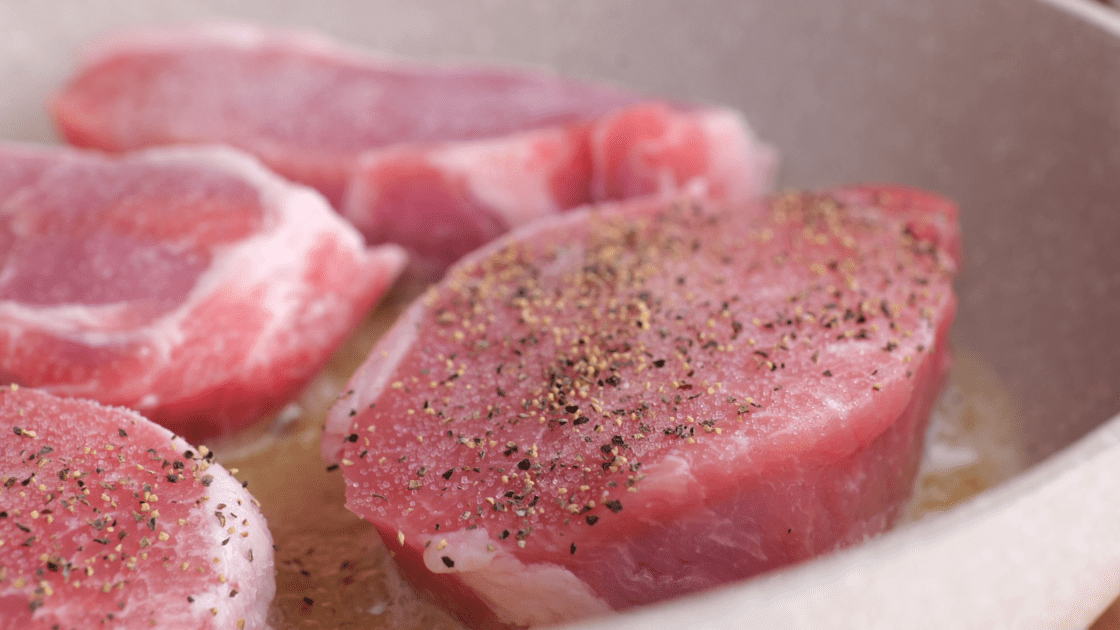 Add your chops and salt and black pepper to your taste on the top. 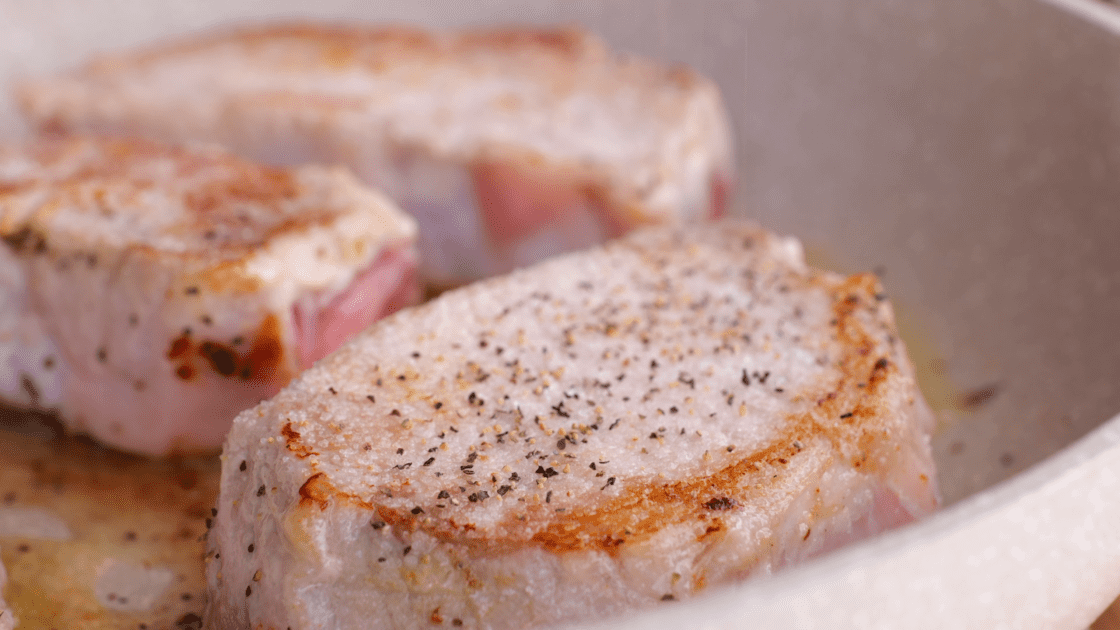 Pan sear pork chops in the butter until lightly brown, then flip and repeat. 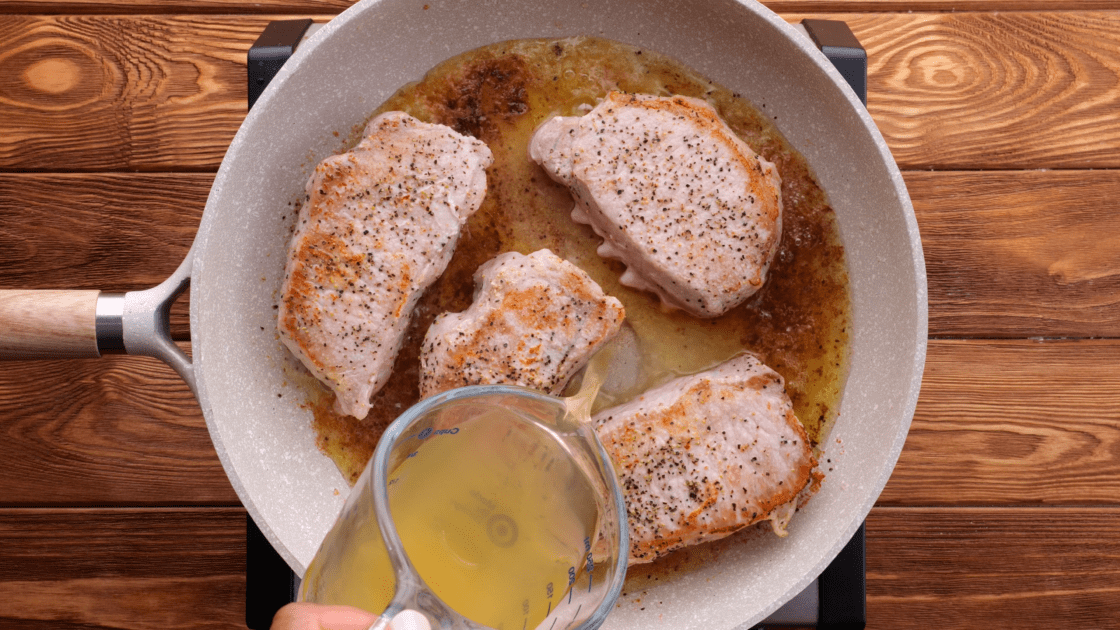 Once the pork chops are just brown (not cooked all the way through), pour in your chicken broth.

Continue cooking until the chicken broth is all cooked down. This will take anywhere from 5-10 minutes, likely more like 10.

I just kinda stand there and talk to the kids during this step so it is hard for me to keep track of time. 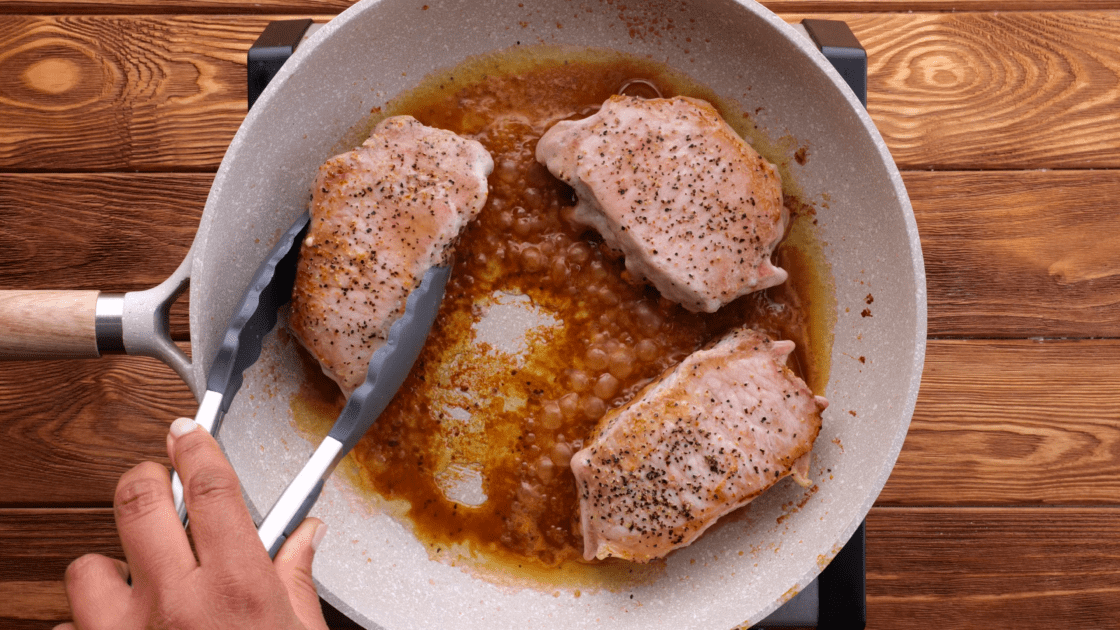 Remove your pan-fried pork chops to a plate.

When you take them out, your pan will look a bit like this.

Now that is the browned butter and concentrated chicken broth remaining, along with browned bits of pork chop. Lots of flavor going on here!

Turn the heat off. That skillet is hot enough for what we want to do already. 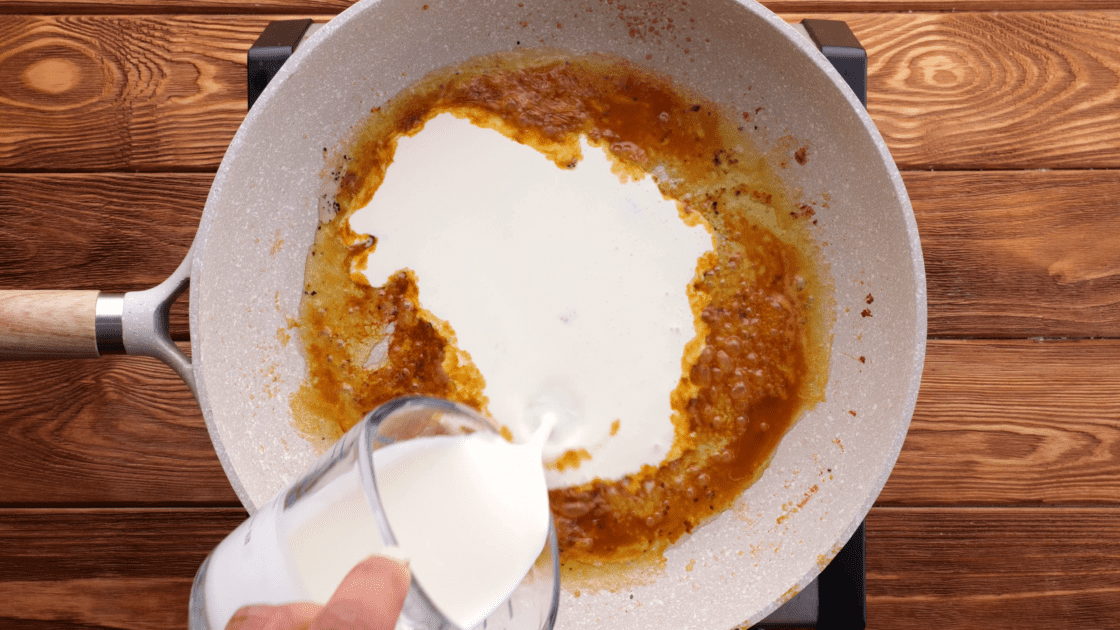 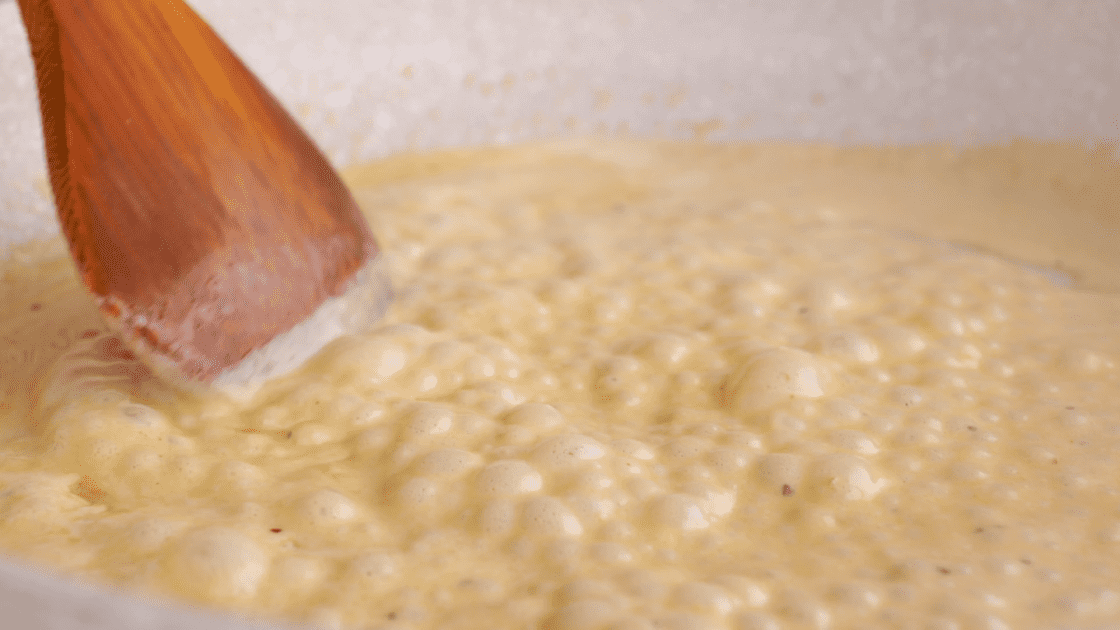 Using a wooden spoon type thing or something with a flat bottom if you have it, scrape and stir all around that pan until all of that yummy flavor from the bottom is part of your pan sauce and it looks like this. This will only take a few minutes and as you do so the cream will heat up plenty. 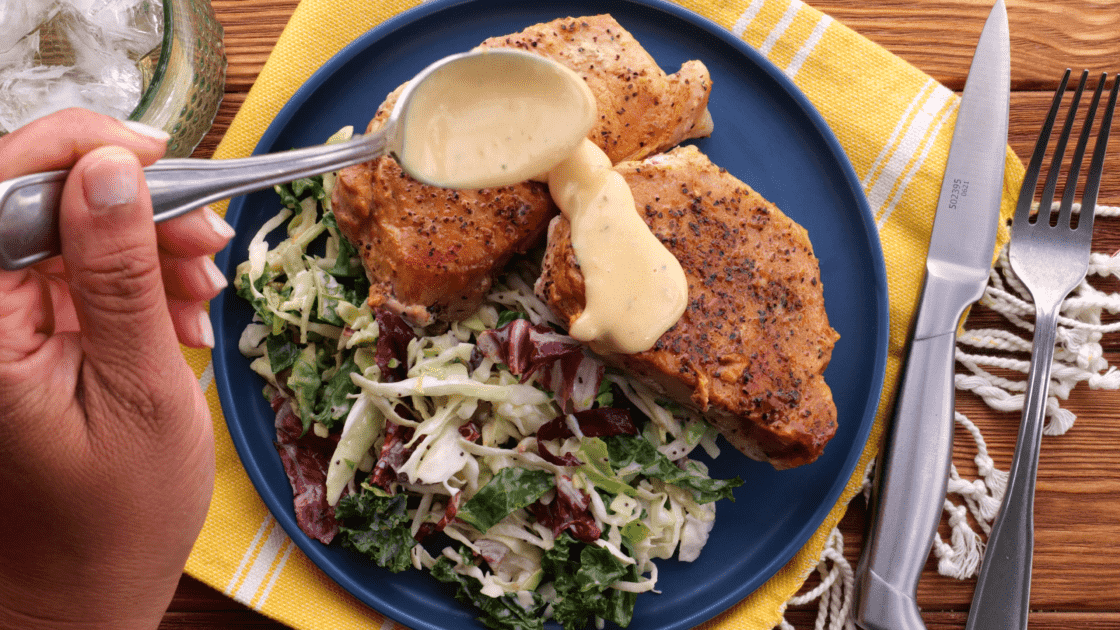 Serve pork chops topped with the cream sauce and enjoy! 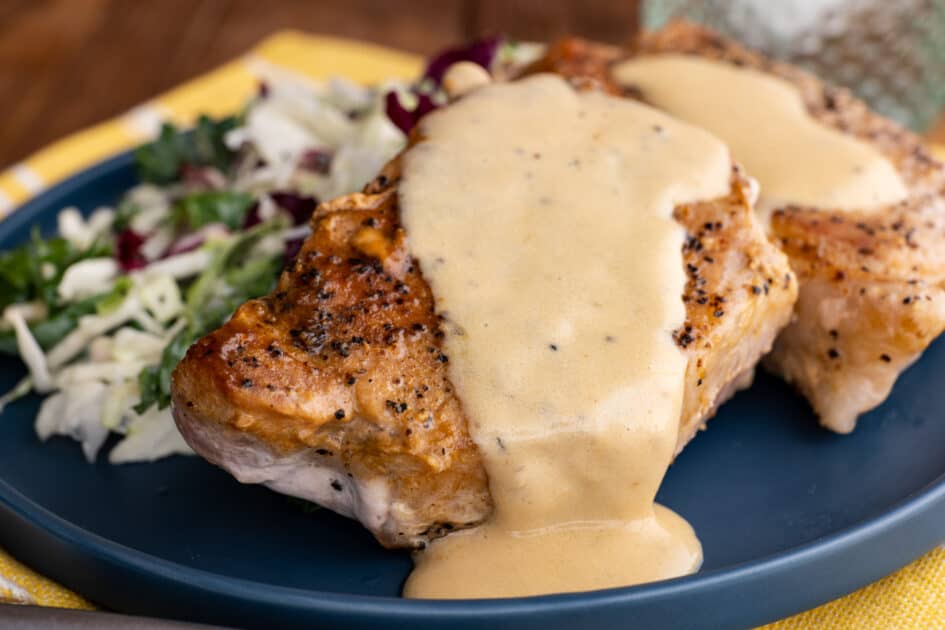 Serve it with a side of your choice. Mine is pictured with a generous helping of my Super Food Salad.

What are the best cuts of pork for searing?

I recommend boneless pork chops, as they’re thick and tender. But you can also use loin chops or center-cut bone-in chops.

What do you serve with pan-seared pork chops?

Here are some serving suggestions, but these pan seared pork chops work as a main dish with any of your favorite sides. Like coleslaw, mashed potatoes, grilled asparagus, fresh green beans, or my simple zucchini and squash recipe. 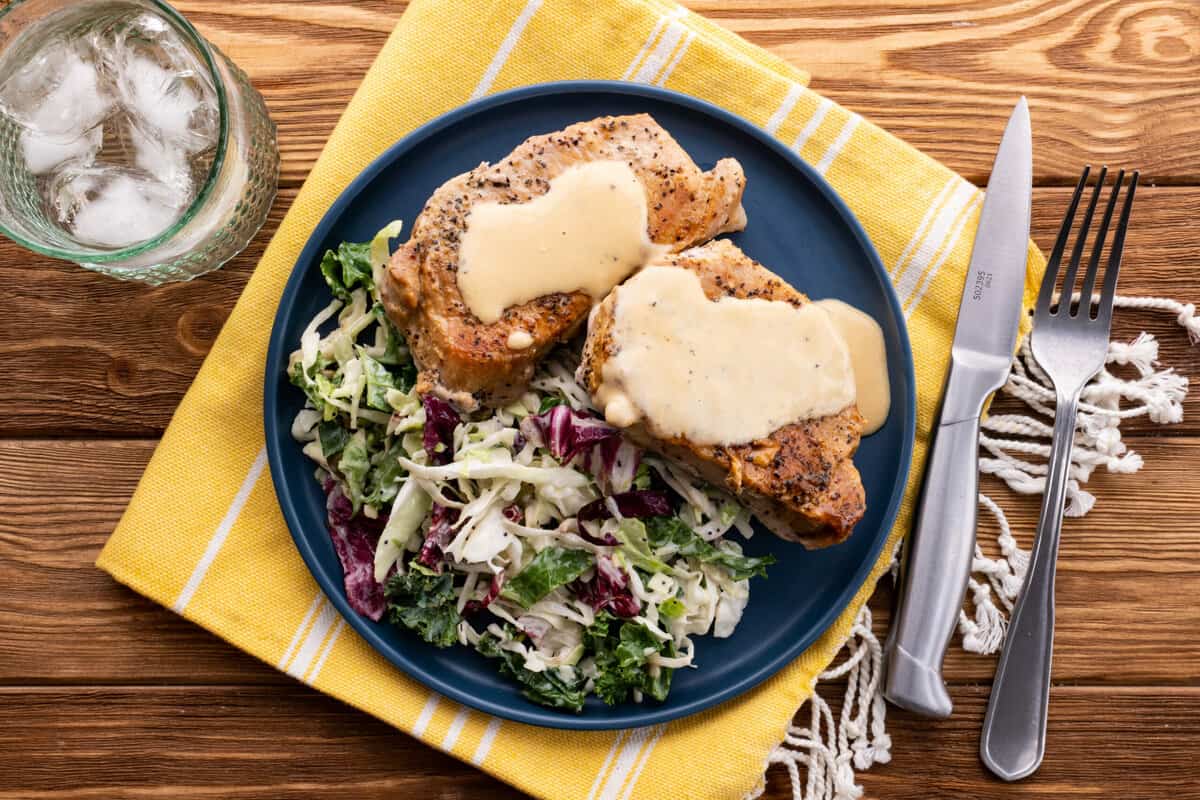 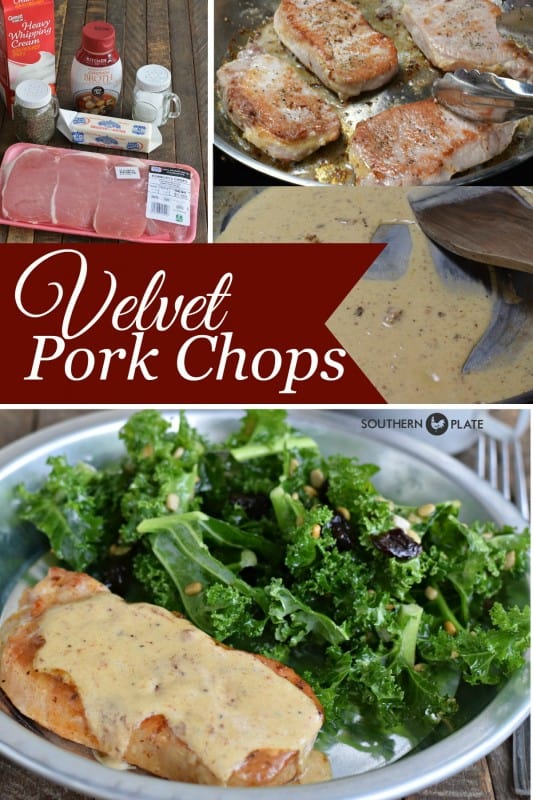 absolutely delicious! I made a few changes: I used pork cutlets instead of chops (because that’s what I had), and due to dairy allergy I used Myoko’s vegan butter (duck fat would probably be good too), and homemade coconut milk instead of cream. I also seasoned the cutlets with a little nutmeg and cardamom, and crumpled some sage leaves into the broth. This was a wonderful breakfast with a side of collard greens, and tonight I’ll eat the leftovers with a baked sweet potato.

I think I can use this same pattern with cube steak. As much as I love chicken fried steak (and have a good recipe that substitutes cassava and arrowroot for the regular flour), this is a much lighter presentation. I’m envisioning Rosemary/Thyme, garlic, caramelized onions, and mushrooms…. served with a pile of roasted veggies.

Thank you!
Love and Hugs from St. Louis

Sounds delicious Terri and thanks for rating the recipe and leaving a comment! Much appreciated 🙂

These are the very best pork chops I have ever made in 65 years of cooking. They melt in your mouth and the gravy is oh, so good!!! Thank you!!!

Thank you so much Joann, really appreciate your comment. So glad you love them 🙂
Really glad you are a part of the Southern Plate family!