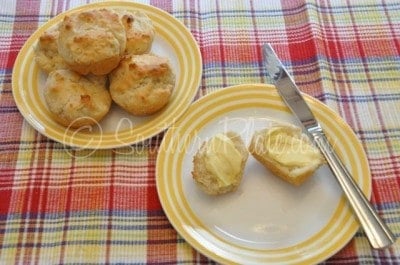 I’m the worlds worst about planning a meal from start to finish and not thinking about the bread until we’re about ready to eat. While Jordan rolls are one of my favorite breads to serve at meals, followed by my Mama’s Hoe Cake at a close second, when you’ve got a family of rumbling stomachs and the meal about to go on the table there is no time to call either of those into play. That is where these rolls come in handy. If you work fast, you can have them ready start to finish in about ten minutes using ingredients you probably already have on hand.

Note: Using what you have on hand, how cool is that? Being able to make a meal for your family without having to buy anything special. I think the best meals come out of that, just like the best lives come out of “using what you have on hand” to make your own happiness. Okay, done being philosophical for now (“for now” meaning for this paragraph). 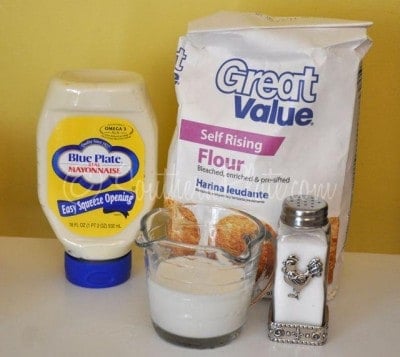 Now let me start this post by saying that if you are someone who doesn’t care too much for mayonnaise, you’re in good company. I’ve never been a “Ooh mayo!” type gal myself. It kinda grosses me out, to be honest.* Thing is, though, mayonnaise is mostly just oil and eggs so lets look at it from that perspective for the basis of this recipe- because, while I don’t care for mayo, I love these rolls.

The ingredients are easy and you probably already have them on hand: Mayo, Milk, salt, and Self Rising Flour, or Harina Leudante as we have just now learned  is the Spanish translation for “Self Rising Flour” , I think.

So for all the folks who think the South doesn’t have culture, I just wanna give you a big old triumphant Harumph! We got so much culture down here you can pick up another language just walking down the aisle of a grocery store.

When we use the phrase “to be honest” we are pretty much saying “up until this point I haven’t been…” or “being honest is so rare for me that I need to declare I am about to do it if  I should ever hit on an honest moment in conversation”. I used to work at a bank whose chief officer used that phrase in every other paragraph. He was known to be a man of integrity but still, when someone handling your money says that you can’t help but feel a few beads of sweat around ye olde forehead, ya know? Another thing I don’t understand is why we say “I could care less” when what we really mean is “I couldn’t care less”.

But, to be honest with you, I’m bad about saying that myself. ~giggle~ 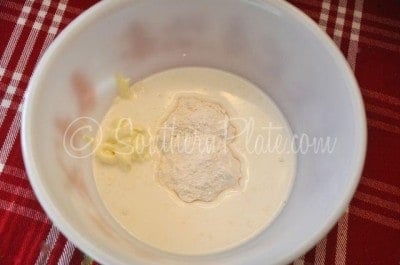 Place your flour, mayo, and milk in a bowl… 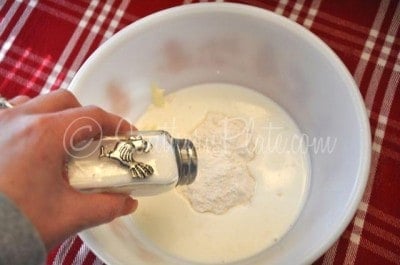 Add in a your dash of salt. This just gives them a little more yummy oomph.

Don’t fret because you really can’t mess this up so just do a dash, one shake, into the bowl and if you do end up accidentally putting in too much salt, then this is the time to tell yourself “Well I guess I liked saltier rolls anyhow!”

I love this little salt shaker. I got it at Cracker Barrel several weeks back. They have a lot of pretty rooster stuff right now.

I digress...but don’t I always? 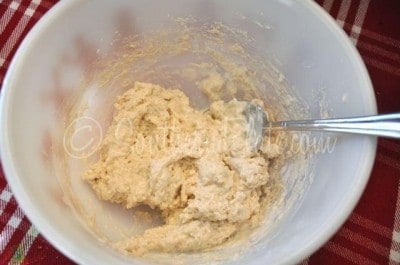 Stir that up with a spoon until it is all gobbledy like this.

These are kind of a cross between a biscuit and a roll, so if you want biscuits, call them biscuits. If you want rolls, call them rolls. 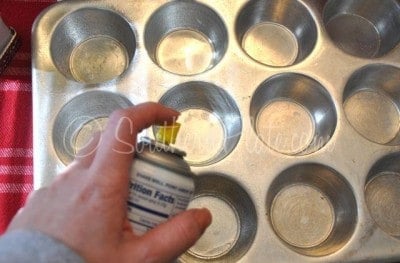 I also like that this recipe just makes six, which is usually plenty for us. 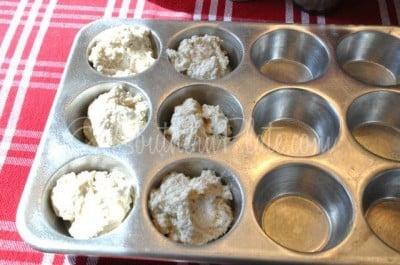 Divide your batter between the muffin cups.

See how easy that was? Dump in a bowl, stir, bake.

While they are baking, lets have us a little show and tell, shall we? 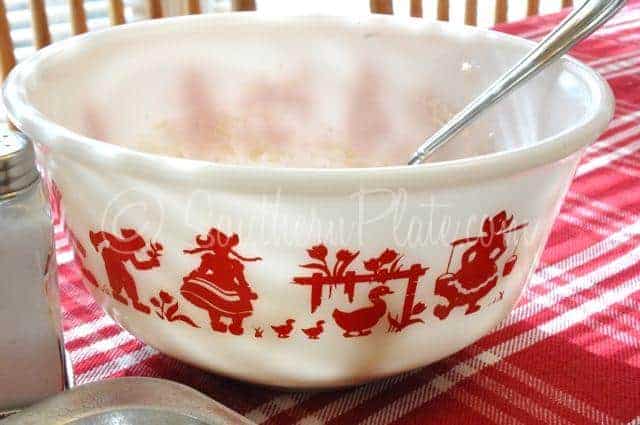 Ahh, this bowl. I love this bowl. Folks, I’ve coveted this bowl for a very long time. You see, it belonged to my mother and every time I went to her house I would inevitably end up opening her kitchen cabinet and spying this bowl. My great grandmother had one just like it and I’ve been looking for one to buy for quite some time with no luck.

Last time I was there I got out my phone to take a photo of it in order to help my search and told Mama what I was doing. When I left, she surprised me by handing me a bag. Guess what was inside it? “You just go ahead and take it and think of me when you use it” she said.

~grins from ear to ear~

This bowl was made by Hazel Atlas back in the day and the pattern is commonly referred to as “Dutch”. It is a beautiful milk glass and exceptionally well made. I love the vintage pieces like this and really need to do another post on my vintage pyrex pieces for you soon. Whenever I need a new dish, I always look to the old stuff first. I actually don’t use any of the new pyrex because I’ve had it explode on me before (see here for a report Consumer Reports did on that) . Isn’t it amazing that pyrex made forty years ago is baking today better than the new stuff? If that isn’t a testament to old fashioned quality I don’t know what is!

Okay, so the whole exploding Pyrex thing was a bit of a downer…let us move on to flowers to lighten the mood! 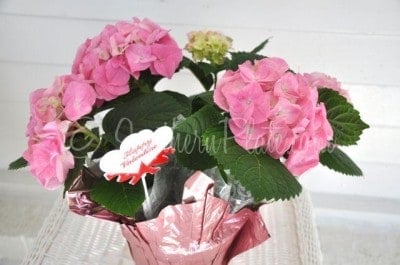 And now for another show and tell since we have a few more minutes before our rolls are done. This is my new Hydrangea bush. I dearly love Hydrangeas, almost as much as I love daffodils. Ricky brought this one home for me for Valentine’s day. I’m going to plant it in the front of my house. I already have five huge hydrangeas in the back yard so you know my front yard has been feeling neglected without one. It is pink now but will turn blue after I plant it due to the acid content of our soil.

Aren’t they just the prettiest blooms?

Okay, back to our biscuit/roll/thingies…

Call ’em what you want and serve ’em when ya need ’em.

With a recipe that just has you throwing a few ingredients together in a bowl and stirring, then cooking for eight to ten minutes, it is entirely possible to have these done start to finish in ten minutes. Yeehaa and pass the gravy! 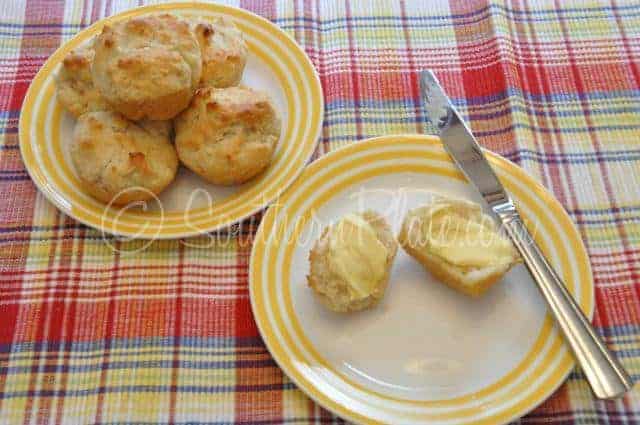 *To make your own self rising flour, see my Frequently Asked Questions Page.

A great cook knows that its not what is on the table that matters,

it is in the chairs around the table.

Submitted by Beverly, and so very true!