You only need 5 ingredients to make this old-fashioned apple dumplings recipe. The cinnamon-spiced apples are baked in flaky biscuit dough and buttery sugar syrup and are ah-mazingly delicious. 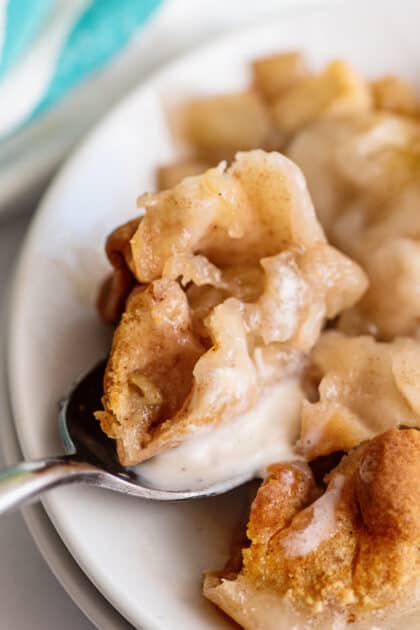 I am so excited to bring you this homemade apple dumplings recipe today. The weather is starting to turn cooler here and has brought with it thoughts of beef stew and apple dumplings. Of course, I love apples cooked in any form; whether that’s in my apple dapple cake, fried apples, apple pie, or these delicious apple dumplings.

Now, the steps are as simple as the ingredients for these easy apple dumplings. Just peel and chop the apples, toss them in the cinnamon, and then add them to the biscuit dough pieces. Once you have that assembled in your baking dish, it’s time to make the syrup! This is the best part! We place pats of butter on the dumplings, sprinkle them with sugar, and then pour boiling water over the top before baking.

When it’s time to serve your apple dumplings, pour the sugar syrup over the flaky buttery dough with tender pieces of cinnamon apple inside. Can you think of a better fall dessert? Serve with a scoop of vanilla ice cream to complete the meal. 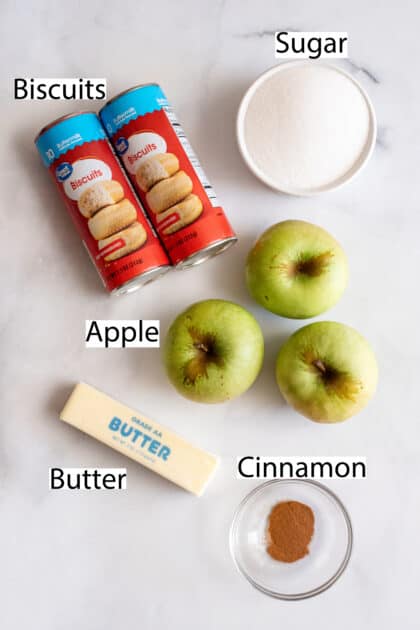 How to Make Old-Fashioned Apple Dumplings 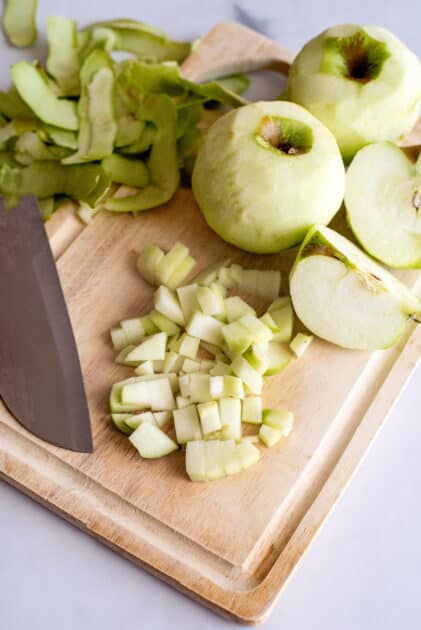 Peel and slice your apples however you want. 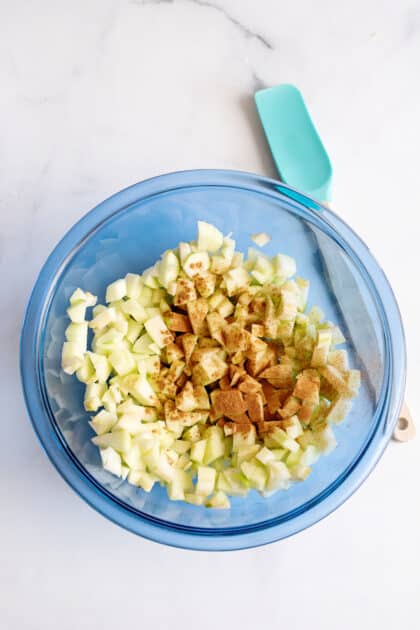 Place your diced apples in a mixing bowl and sprinkle with cinnamon. 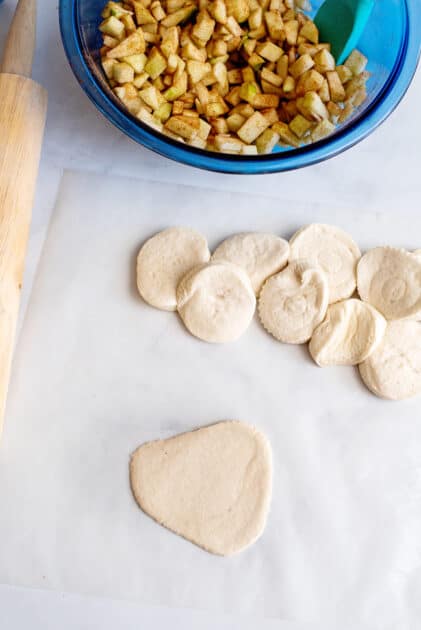 Take each biscuit and roll it out as best you can on waxed or parchment paper.

Don’t roll it too thin. Just roll it out enough to be able to put some apple filling in the center. 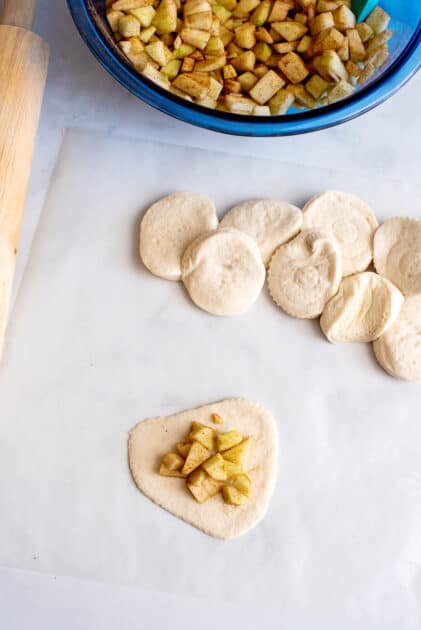 Put a heaping tablespoon of apple filling in the center of each one. 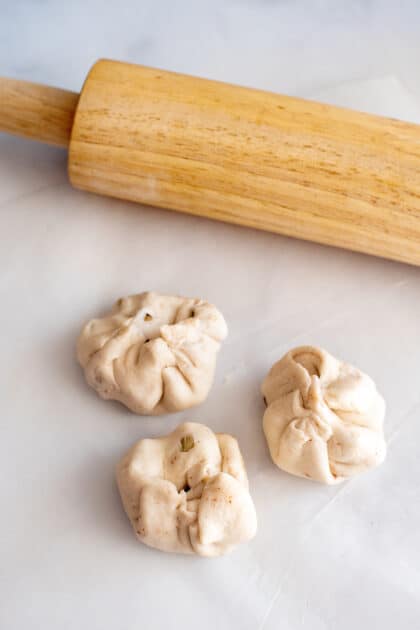 After you put the filling in each round of dough, fold up the sides and press them together so they look like little square packets. 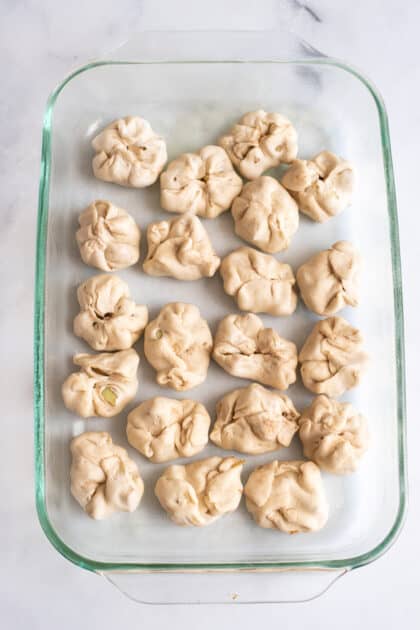 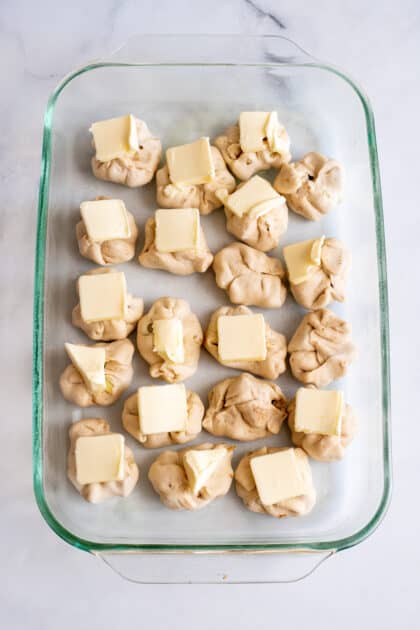 Top each with a small pat of butter. 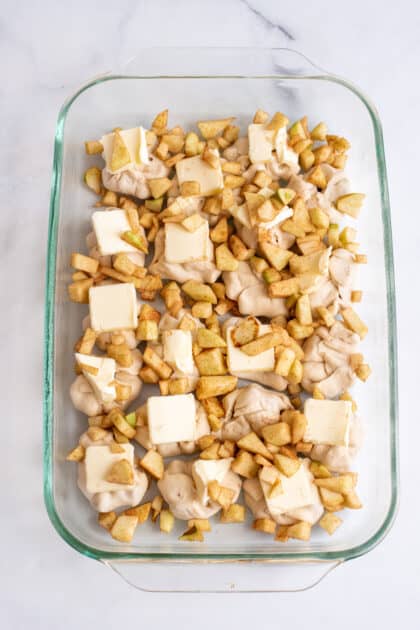 Sprinkle the remaining apples over them.

If you don’t have apples left, don’t worry about it. 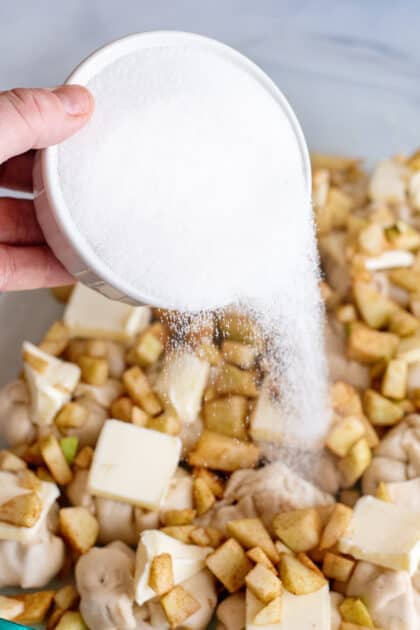 Sprinkle your white sugar over the dumplings. 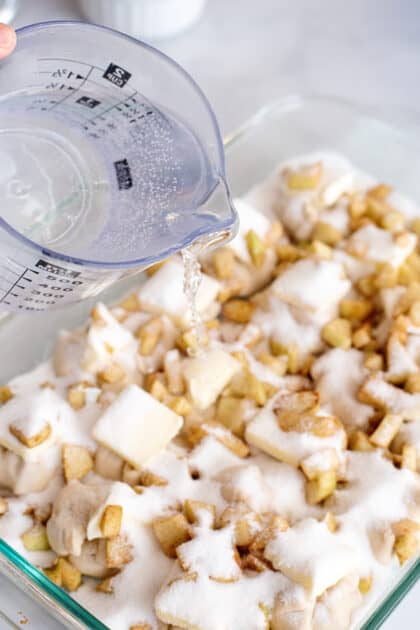 I know this seems strange pouring water over this but trust me, it will turn into a delicious syrup. 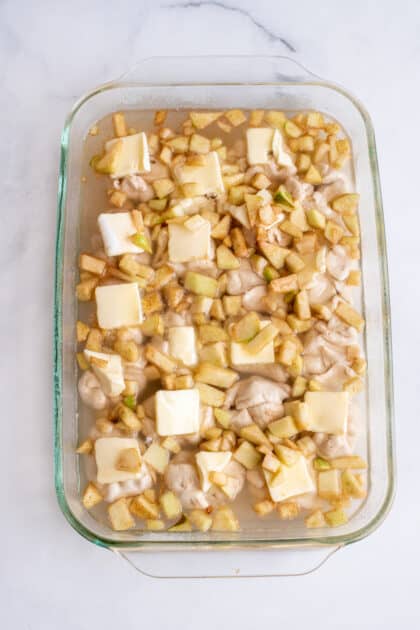 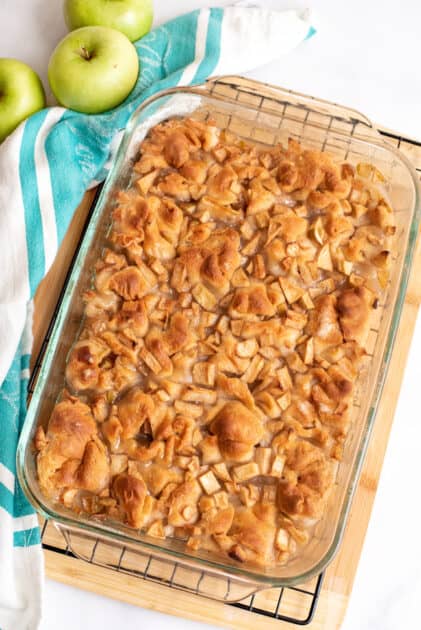 They’ll look golden brown like this and smell amazing once done. 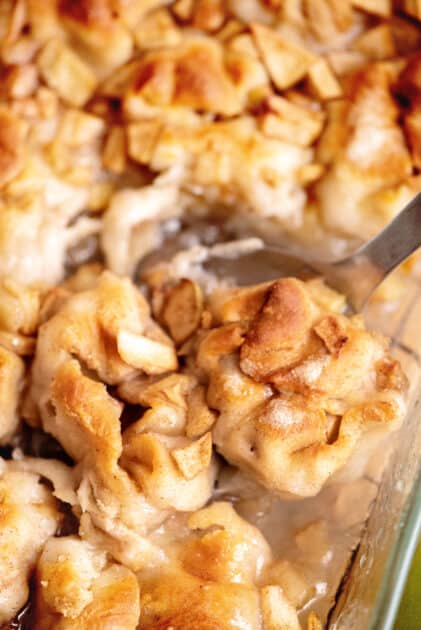 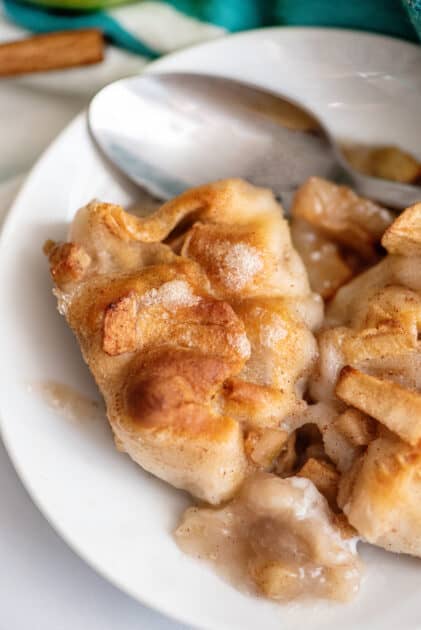 Pop them on your plate… 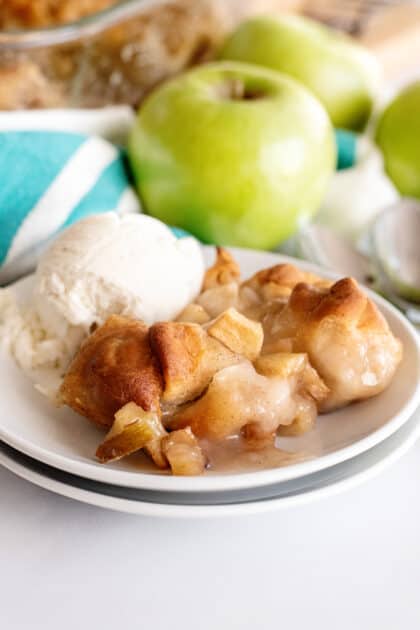 And add a big scoop of vanilla ice cream.

Now sit back and enjoy fall and all the wonderful flavors that it brings!

Store leftover homemade apple dumplings in an airtight container in the fridge for up to 2 days. I recommend reheating them in the oven before serving so they crisp up once more.

How do you serve old-fashioned apple dumplings?

They taste great on their own, but I highly recommend serving them alongside a scoop of vanilla ice cream or some whipped cream (here’s my homemade recipe). Some people also add a drizzle of caramel sauce, but I personally think the syrup is sweet enough.

Do you put milk on apple dumplings?

I’ve heard some people pour milk over the apple dumplings before serving. I’ve never done this but you can give it a go if you like.

What are the best apples for dumplings?

Granny Smith apples are always the best for baking. However, other crisp apple varieties that would work well include Honeycrisp, Pink Lady, Jonagold, Macintosh, and Golden Delicious.

Apple dumplings are traditionally served hot straight out of the oven. However, you can also serve them cold or at room temperature.

Where did apple dumplings originate?

How do you make apple dumplings with mountain dew?

This is straight from the The Pioneer Woman. Their recipe uses a can of Mountain Dew (or Sprite) in place of the boiling water to bake their apple dumplings. I think I need to try it out next time! 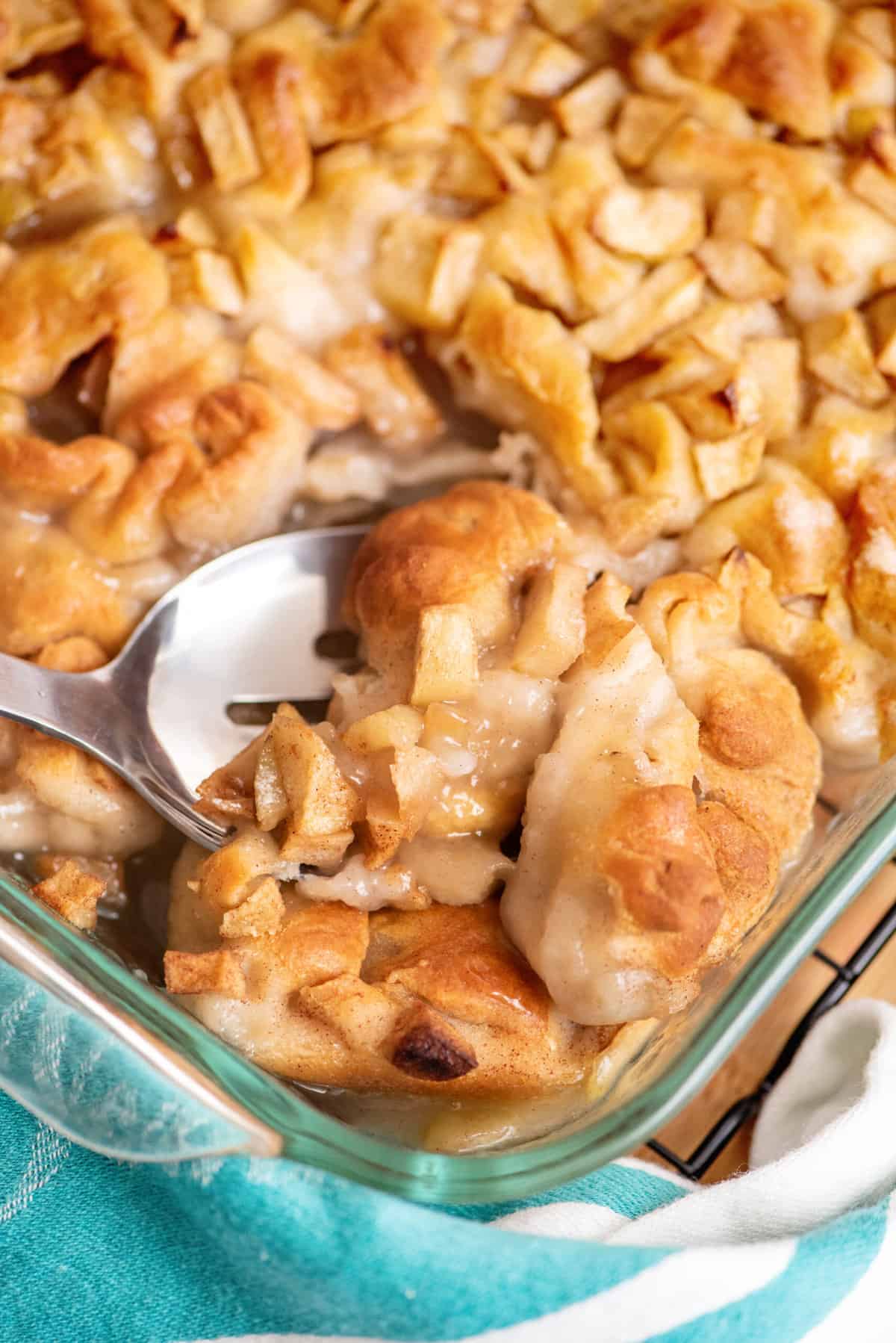