How To Make Baked Ziti Easy And Tasty

This Killer Baked Ziti is so easy and one of those dishes that you NEED to make SOON! 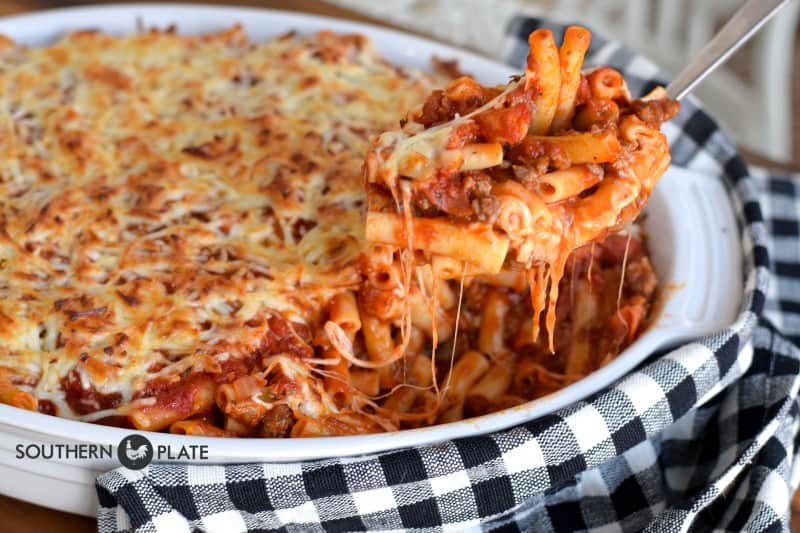 I make a lot of different dishes at my house. There are the regulars, the ones we love and want to have over and over, and then the new recipes that I whip up from time to time and try out on the family to see if it sticks. I know the folks in my house pretty well so it’s a very rare thing for them to not like something I come up with, but every now and then I happen upon a dish that has everyone taking one bite and then asking if we can have it again the next day.

This Baked Ziti recipe has been requested every single supper since the supper I first made it.

My goal was to have an incredibly flavorful, saucy Ziti that went a little beyond the norm and I am really thrilled with how this one turned out. The family agreed this should be called Killer Ziti and I have to admit that I’ve been wanting it again myself, so I’m making it again tonight. They won out – or maybe I did. I guess in the end, we’d really have to lay the blame on the Ziti. 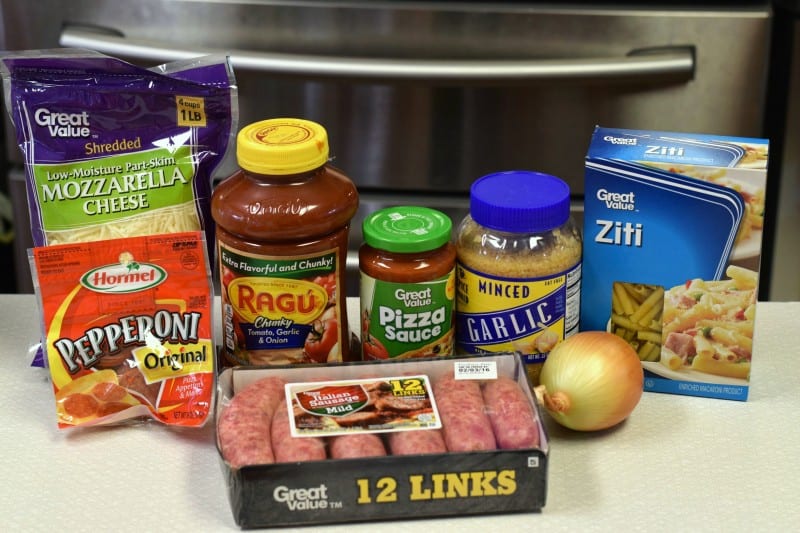 Ingredients for the Baked Ziti

The trick is the double sauces and the very large amount of sauce. You are going to think “Wow, this is way too much sauce” but we are actually only half cooking our ziti and it is going to cook the rest of the way in the dish and soak up some of that loveliness. I generally don’t like oven baked marinara pasta dishes for the very reason that they never seem to have the amount of sauce you want, so this dish defies that and delivers what I crave!

Are spaghetti sauce and pizza sauce the same thing?

Someone reading this is inevitably going to think “Spaghetti Sauce and Pizza sauce are the same thing just with slightly different seasonings. You could just add a little more spaghetti sauce and season it or you could make all of your sauce from scratch and…” Well you could. You could also walk five miles to pick up a gallon of milk rather than drive. You could even get a cow to keep in your back yard and care for it daily rather than outsource your milk acquisition. You could do a lot of things but this recipe isn’t about that. This recipe is about spending a buck twenty nine and buying a jar of pizza sauce to add in with the spaghetti sauce because it tastes good and it’s a matter of opening two jars.

*I use this brand of pepperoni because it doesn’t seem to have the grease that other brands do. Whenever I use the other types on a pizza or something and pull it out of the oven there are little grease puddles on top of the pieces but I’ve never seen that with this type. 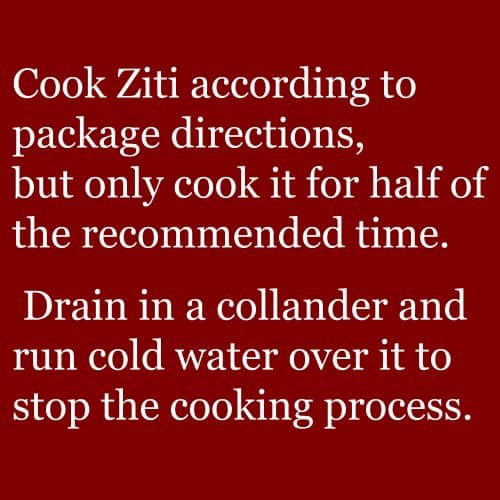 Here is where we only partially cook our Baked Ziti – please read the photo above for instructions. 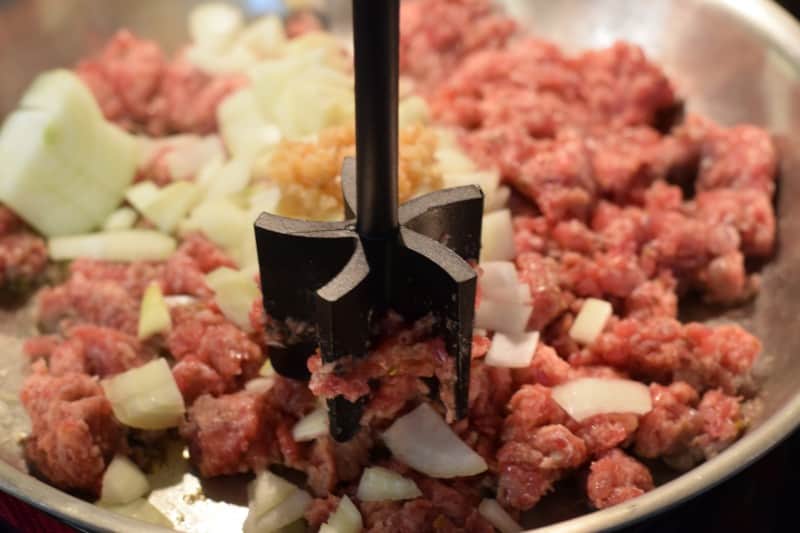 To do this, just cut a line down one side with a knife and it will come open and slip off. Place sausages (see recipe below for amount) in large skillet and add onion and garlic. Saute that over medium high heat until sausage is nicely browned and has no pink in the middle.

This is my little handy dandy meat chopper thingie. I got mine on Amazon but they are available in a bunch of places. I get a lot of questions whenever I show it and yes, you really do need one! 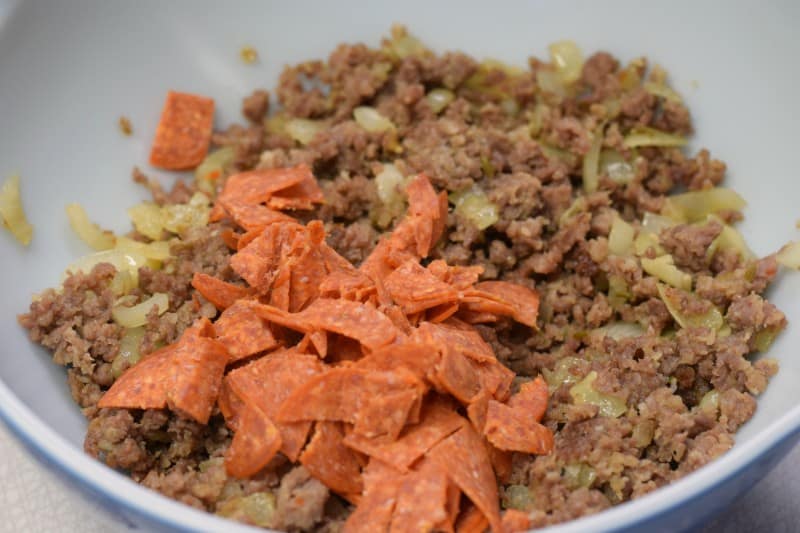 Pour that into a large bowl (that can handle the heat of it) and add chopped pepperoni. 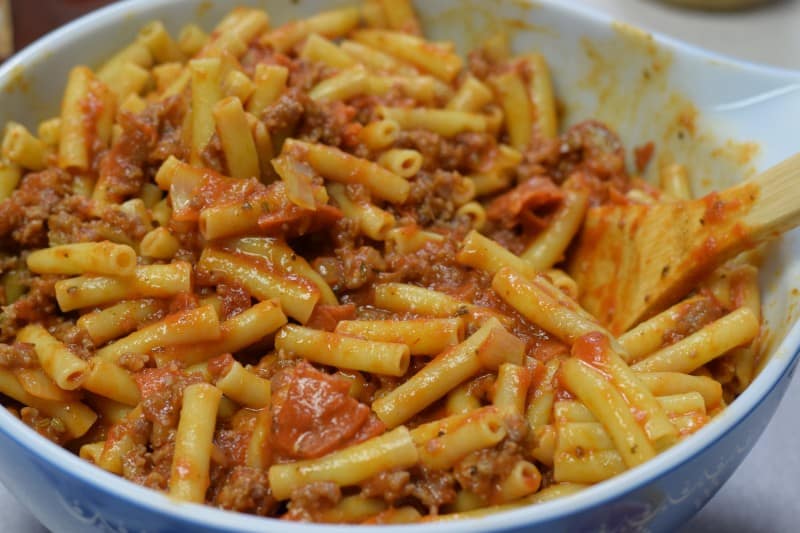 Add partially cooked pasta, entire jar of pizza sauce, half the jar of spaghetti sauce, and stir until it is all mixed up really good.

Did I mention that this is a large bowl? Oh yes, I did. If you overlooked that at this point you may be looking for another bowl… 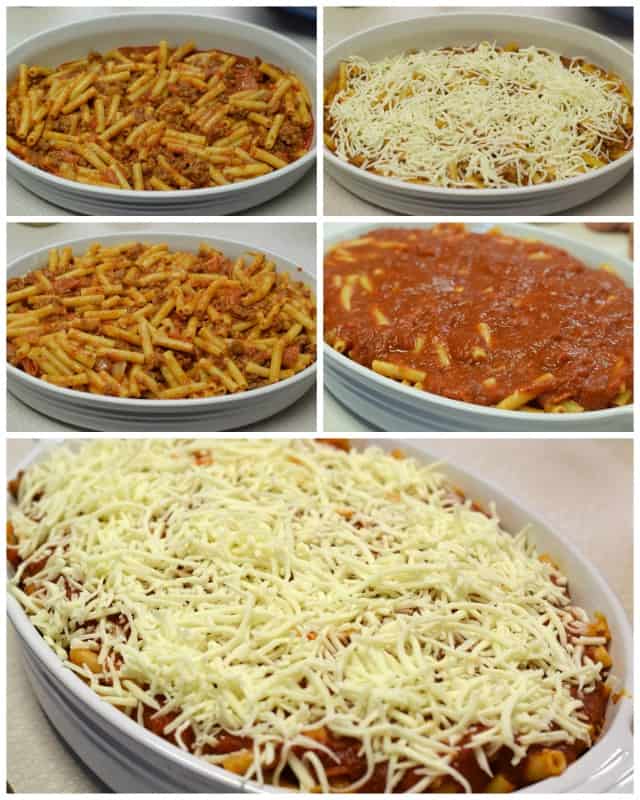 Now put half of the remaining spaghetti sauce in the bottom of a 3.5 to 4 quart baking dish (A 9×13 will work great) and place half of your pasta mixture on top of that, spread about a bit.

Sprinkle about a cup or cup and a half of cheese over it.

Add the rest of your mixture and top by spreading the remaining spaghetti sauce on top. Sprinkle about another cup and a half of  cheese.

Place this in a 350 oven, uncovered, for 30 minutes, or until the top is just very lightly browned. BUT it doesn’t have to be browned, good and melty after 30 minutes is fine, too :). 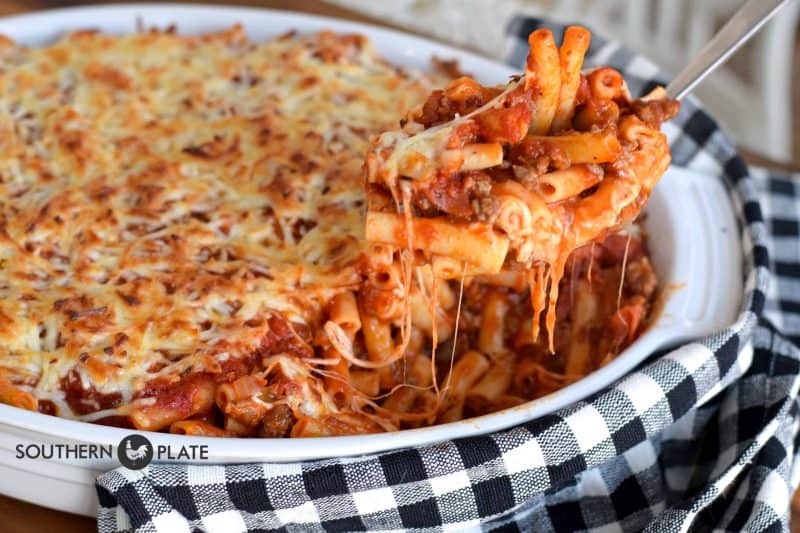 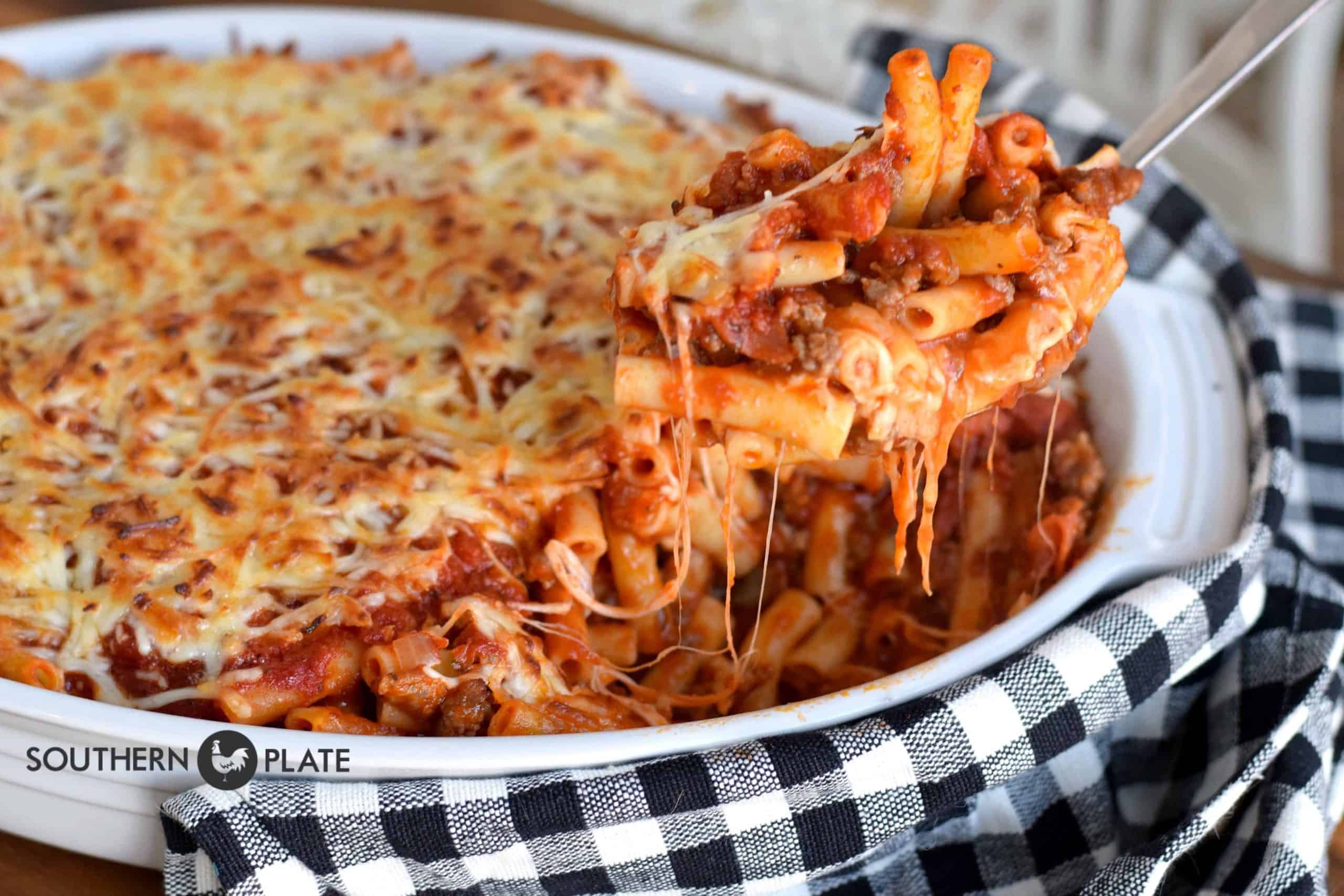 This recipe is featured at the Weekend Potluck (click here)!

“That ship that you’re waiting on to come in? Maybe you should build it.”

Love baked ziti. I like the taste of a mixture of meat, I use 1/2 sausage and 1/2 hamburger, I also put a 16 oz container of ricotta cheese or if I don’t have that small curd cottage cheese, makes it creamy . Always a hit at any function.

I made this for my husband, son, and I for dinner last night. We really enjoyed it! I accidentally messed up and forgot to get PIZZA sauce, so I just used 14-ounces more spaghetti sauce that I had a jar of on hand. I ended up just mixing the pasta in with all of the spaghetti sauce — I didn’t bother layering it. This filled up a 9×13-inch pan ALL the way to the top, but it all fit — whew!

Thanks for a yummy recipe!

I love that you added pizza sauce, too. What a great twist! I am going to make this soon. I know the boys will love it!

I cant wait to hear what y’all think about it Julie!!

This was absolutely wonderful! My husband said it was definitely a keeper and he isn’t a huge fan of casserole type dishes. I used Boars Head pepperoni. All their products are great, just a little more expensive. Will definitely be making it in the future. Christy, thank you for many excellent recipes.

Thank you so much Terri!! I am so glad to hear it was a hit!!