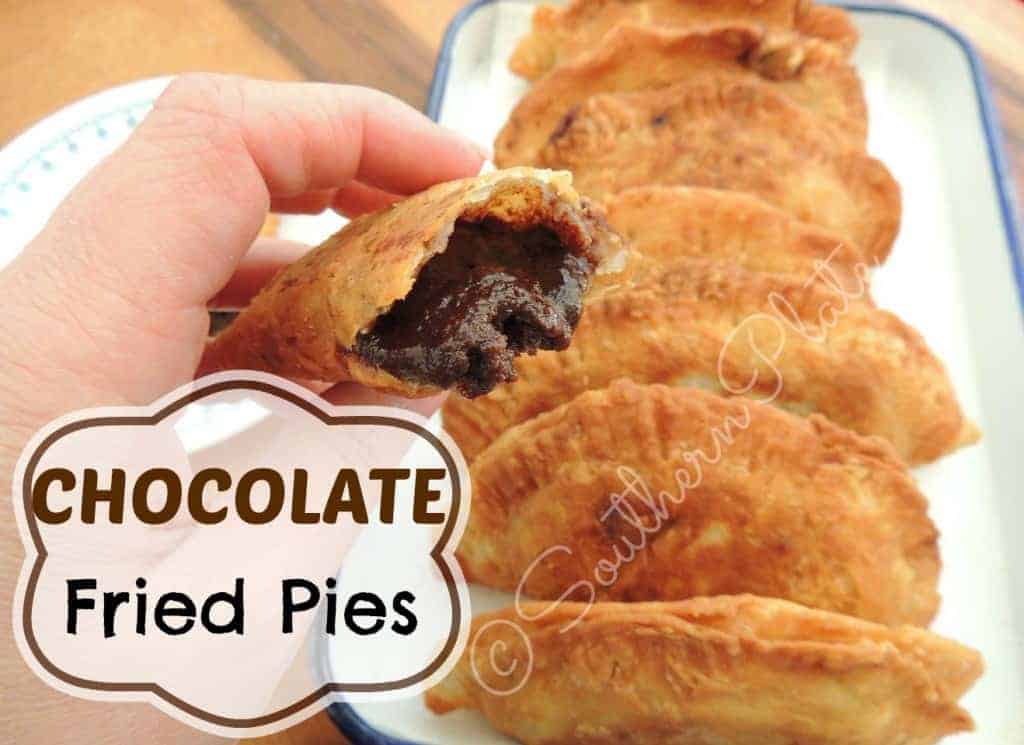 An old fashioned, made from scratch, fried pie has no equal. In the fried pie world, I have two favorites: Peach and Chocolate. For an amazing peach pie like my great grandmother made, you have to start with dried peaches. Fresh or canned just can’t pack the wallup of flavor that dried ones do. Click here for my recipe and if you want to watch me make them with Al Roker – just for kicks.

And for fried chocolate pies like I grew up with, you have to make your own chocolate paste out of sugar, butter, and cocoa powder, like my Aunt Sue does and you have to use the recipe that I put in my first cookbook, like I’m sharing with you here. 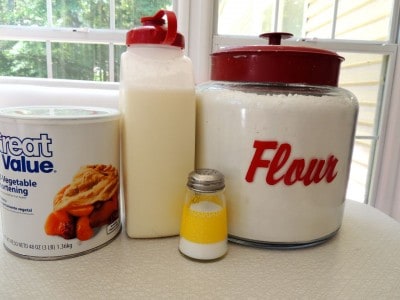 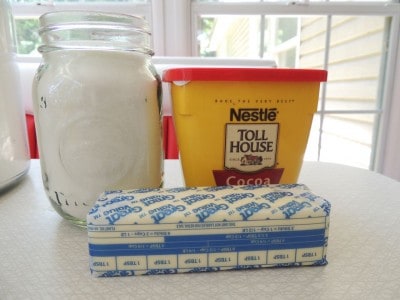 Most of my family’s old recipes don’t use baking chocolate and such, but cocoa powder instead because it was so much more affordable. 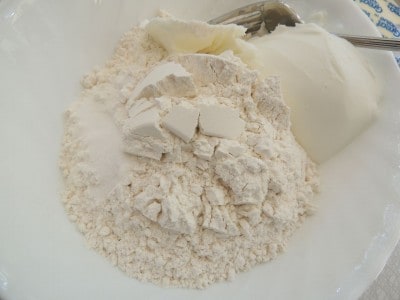 Place flour, salt, and shortening in a bowl. Stir together really well and then cut the shortening into the flour with a long tined fork.

Or a pastry cutter if you’re feeling fancy. 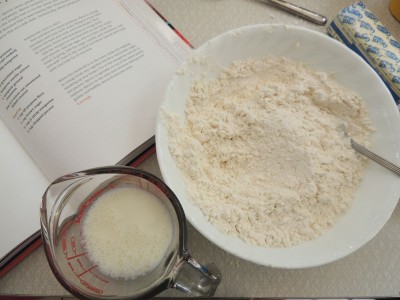 Like this. See? I’m using my own cookbook for this recipe. That is one of the benefits of being a highly unorganized person who happens to have a food blog and a few published books – If it weren’t for these things I’d never be able to find any of my recipes.

Oh yeah, this is my photo of my shortening after it was cut into my flour. 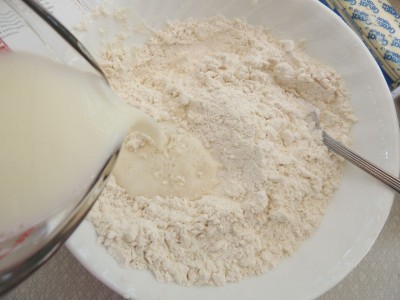 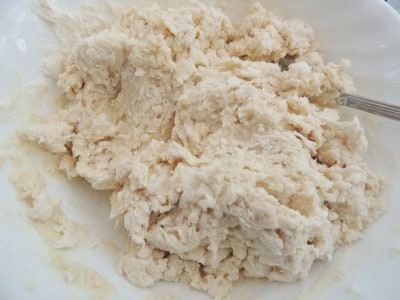 Stir it up really well.

You may need to add more milk, and that is perfectly okay. Add a tablespoon or so at a time until it forms a ball of dough. 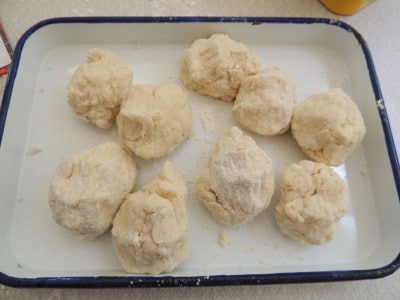 Divide that up into ten ball shaped portions.

Look at the photo and see that Christy has only nine portions. Life is just like that sometimes. 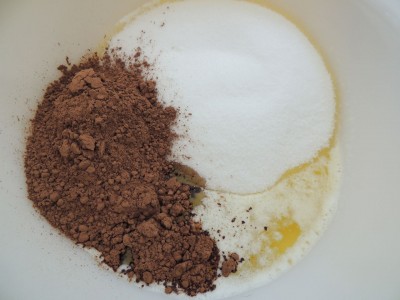 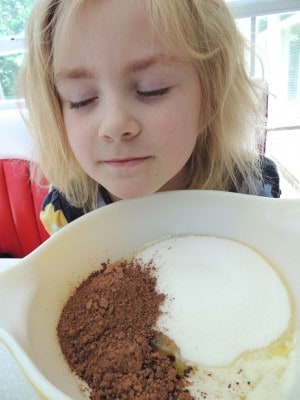 Let your chocolate loving daughter come in for a good sniff… 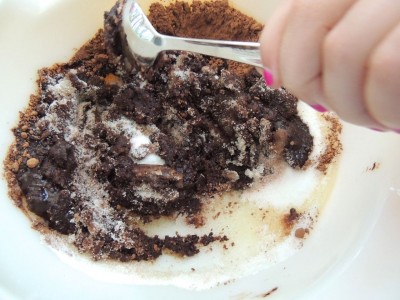 Then let her stir it up really well. 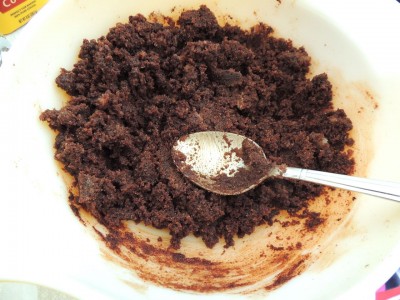 It will form a paste. Note: This is a gritty chocolate paste and it is utterly delicious.

It’s like folks did in the old days and keep in mind folks were, by and large, an awful lot happier in the old days in most cases. Perhaps chocolate paste fried up inside homemade pies had something to do with this. It certainly couldn’t hurt. 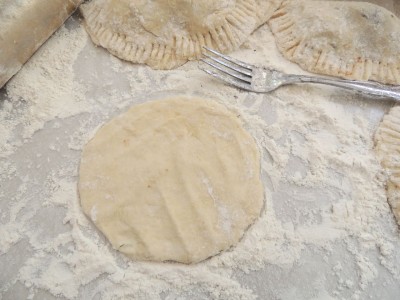 Alright now we need to take each of those dough balls and make them into a 6 inch (or so) circle.

I usually roll mine out but I noticed here that my circles are a lot more like circles when I just pat the out. 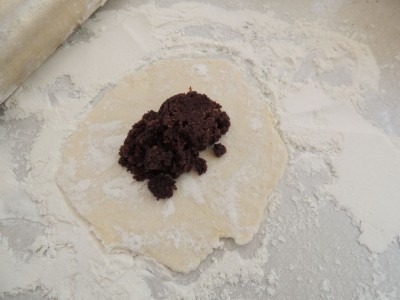 See? This circle was rolled out but that previous perfect looking one was patted out.

Now place about 2 tablespoons of filling in the center of each.

THEN, dip your fingertips in water and run them around the edges to help them stick together. 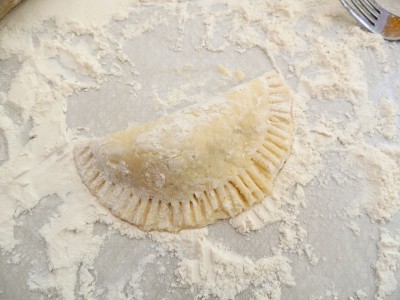 Fold over and crimp edges lightly with a fork. 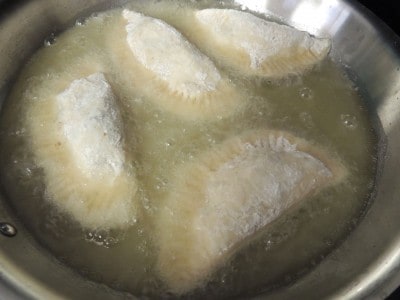 Preheat about 1/4 inch of oil in a large skillet on medium high for about five minutes, then turn it down to medium and carefully add your pies a few at a time, careful not to overcrowd. 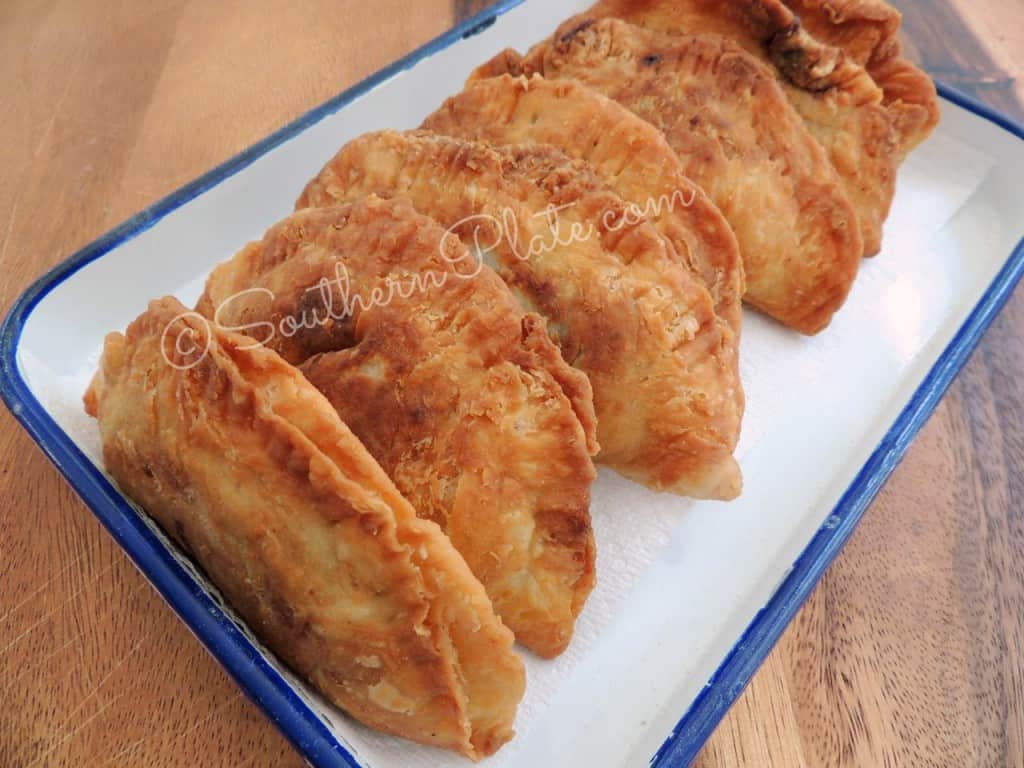 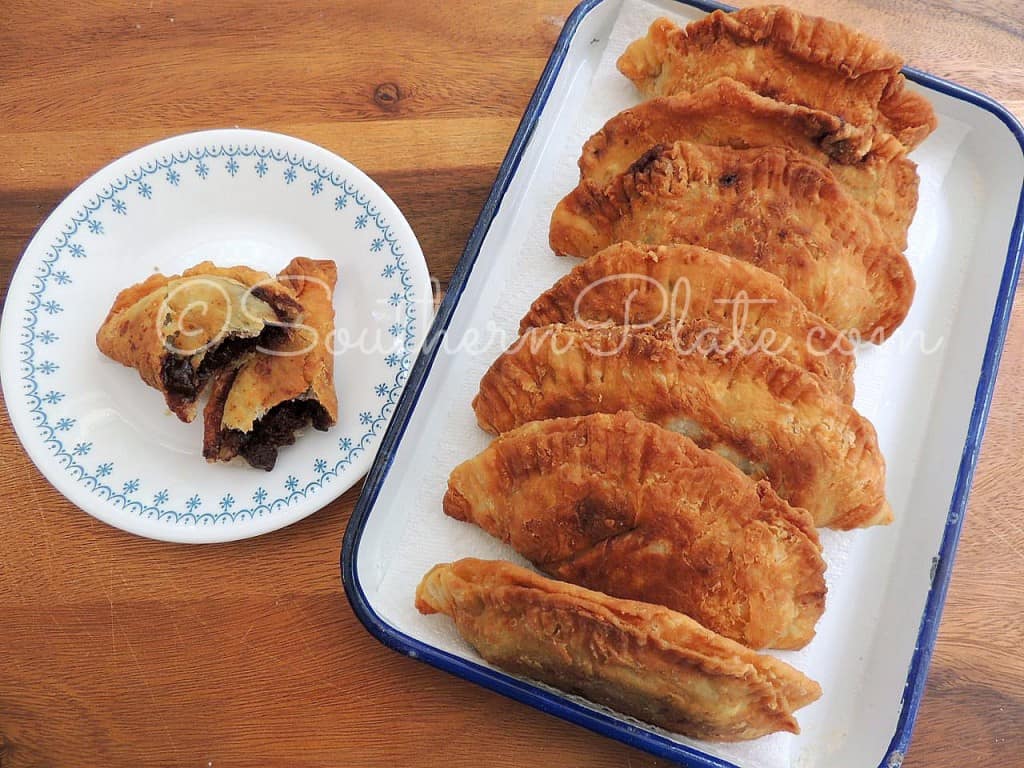 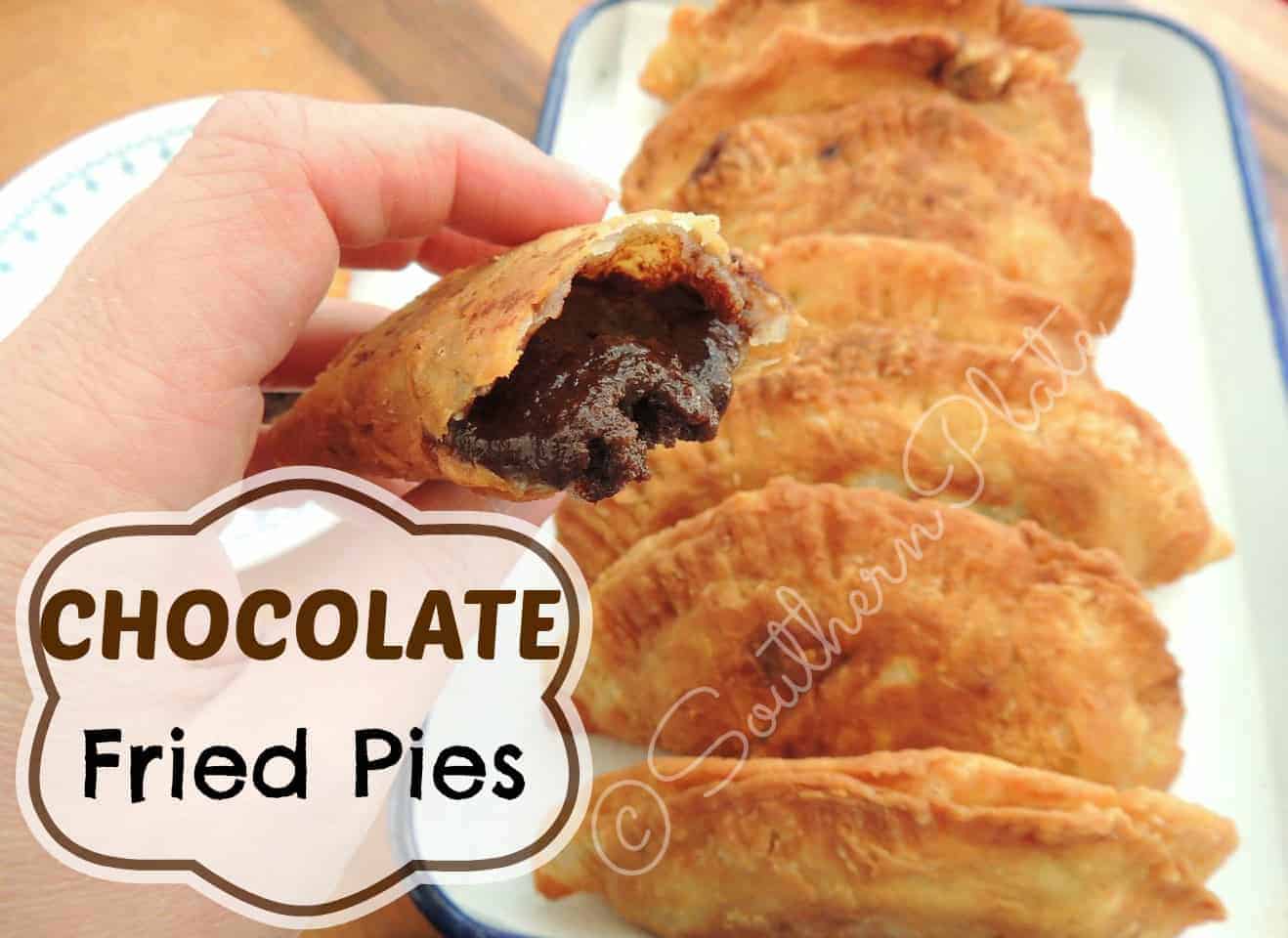 Store leftover pies at room temp for up to three days.

Stay tuned for a new pie recipe each Friday for the rest of the summer with Southern Plate’s Pie Day Fridays!

AVAILABLE FOR A LIMITED TIME ONLY!

Look for it on newsstands or click below to order at 20% off (until June 30th) and Free shipping!

First 500 copies ordered will be signed. 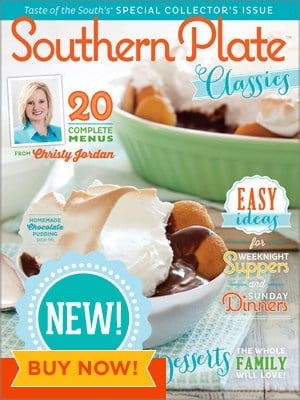 “Everyone has gifts, they just open them on different occasions.”

~Author unknown. Submitted by Jenny. Click here to submit your own.