This superfast corn succotash recipe is loaded to the brim with delicious vegetables and filled with flavor. 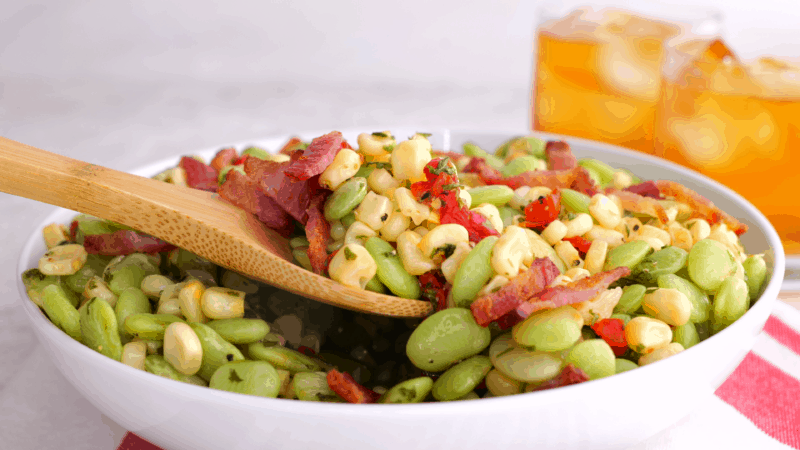 This superfast corn succotash recipe is sure to be a hit! When it comes to good old-fashioned Southern cooking, my favorite things are usually the vegetables – most of the time even more than the desserts! I love garden fresh veggies (especially medleys of them), seasoned up just right and served fresh off the stove. Classic succotash is akin to manna from Heaven for me, and I don’t think it’s blasphemy to say that considering God made all of the ingredients – well, mostly. Although bacon isn’t a natural occurrence on its own, I’m pretty sure it was divinely inspired.

So, what is succotash? According to Wikipedia, it has Indigenous American origin and is known as one of the oldest dishes you’ll usually find on a Thanksgiving table. It’s a dish consisting primarily of sweet corn with lima beans or other shell beans. Other ingredients may be added, as we did here. This Southern side dish is fresh, vibrant, and so delicious – the ultimate crowd-pleasing favorite.

This is my recipe for superfast corn succotash and it is a BREEZE to throw together. Plus, it uses frozen veggies to save you time. I prefer frozen over canned because they are so much closer to fresh. Let’s get cooking! 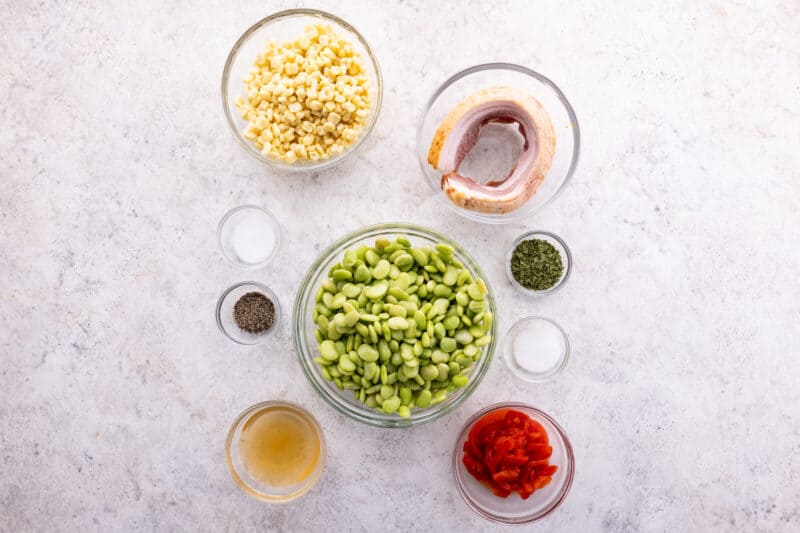 How to Make A Recipe for Succotash Step by Step 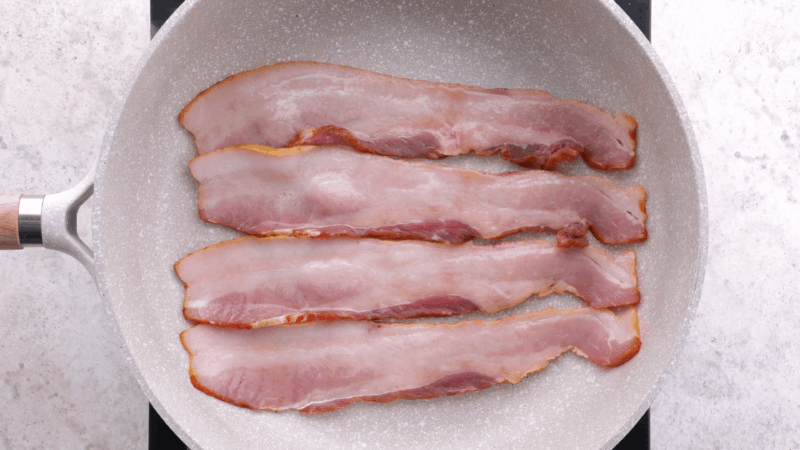 Cook your bacon in a large skillet over medium to high heat until done. When you remove your bacon from the skillet, reserve two tablespoons of bacon grease.

Save the rest. For information on what to do with bacon grease, click here. 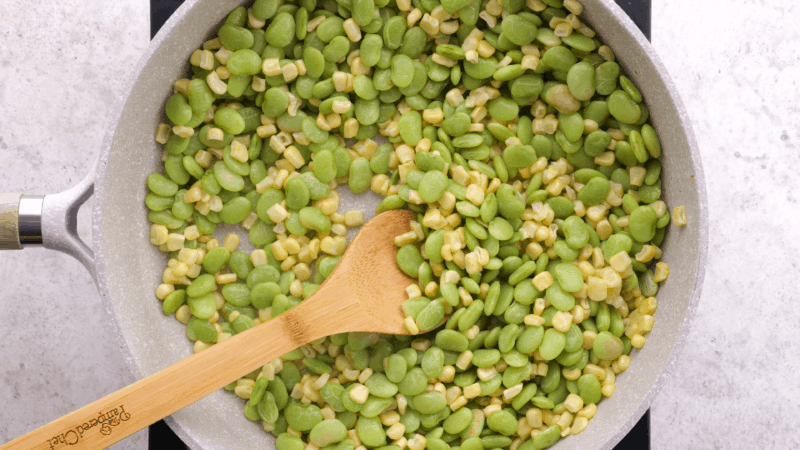 Add frozen corn and frozen lima beans to skillet and cook over medium-high heat, stirring often, until heated through, or about five minutes. 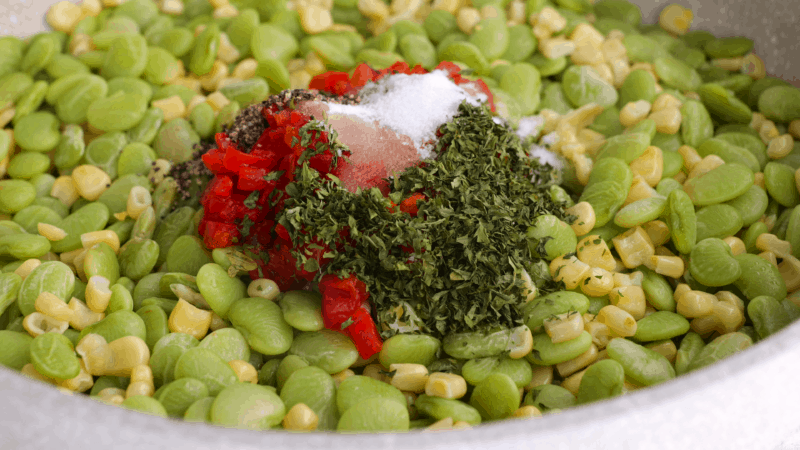 Add in all other ingredients, including crumbled bacon. 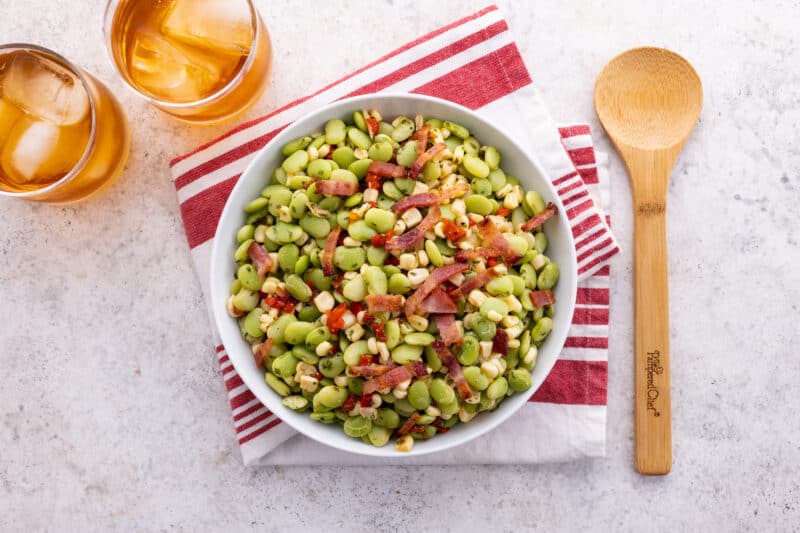 Stir well and bring to a simmer until sugar is dissolved. Serve warm and enjoy!

Note: Sometimes I double the vinegar and sugar for more flavor punch.

What do you serve with succotash?

Succotash is the perfect summer side dish, which is usually served alongside grilled or barbecue meats. Pair your succotash with grilled chicken tenderloins, slow-roasted beef brisket, pulled BBQ chicken, or pork chops.

Can you make this succotash recipe vegan or vegetarian?

Yes, just omit the bacon and this instantly becomes a vegan and vegetarian succotash recipe. You can also simply use olive oil instead of bacon grease. 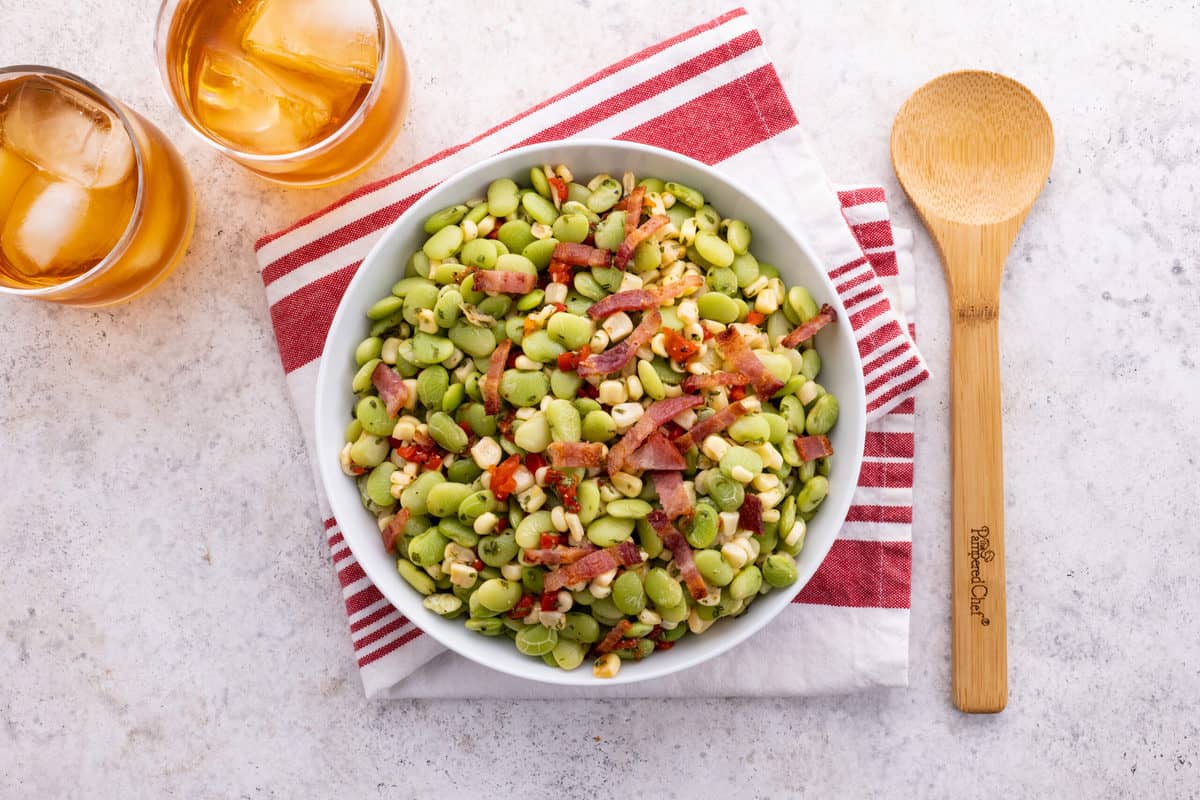 Submitted by Dianne. Click here to read more or submit your own.

I just made this recipe and followed it to a T. I thought it was too salty. I will definitely make this succotash recipe again and again, but I plan to cut the amount of salt in half.

Thanks for your feedback Kennan! So glad you like it enough to continue making it. Enjoy 🙂

I have never had this but it looks sooooo good. Will have to try. Thanks for sharing

Can’t wait for you to try it! Thanks for your comment 🙂

We love this recipe and i fix it at least once a month.

I usually don’t like vegetables! I think I’d love this Succotash! I do like Lima beans, corn, & bacon! Thanks for sharing!

I’m going to make this soon, we love vinegar as well! A couple of years ago I tried a succotash recipe, but it was a huge flop. Can’t remember what all was in it, but it was baked in the oven and had canned tomatoes. Blech. I often make recipes because they sound interesting/unusual, and it often works out well, but not that time! Your version definitely looks tastier.

The SouthernPlate Staff
Author
Reply to  Cheese with Noodles

LOL, I have had some flop that I thought would be fabulous as well. Just try and try again!! 🙂