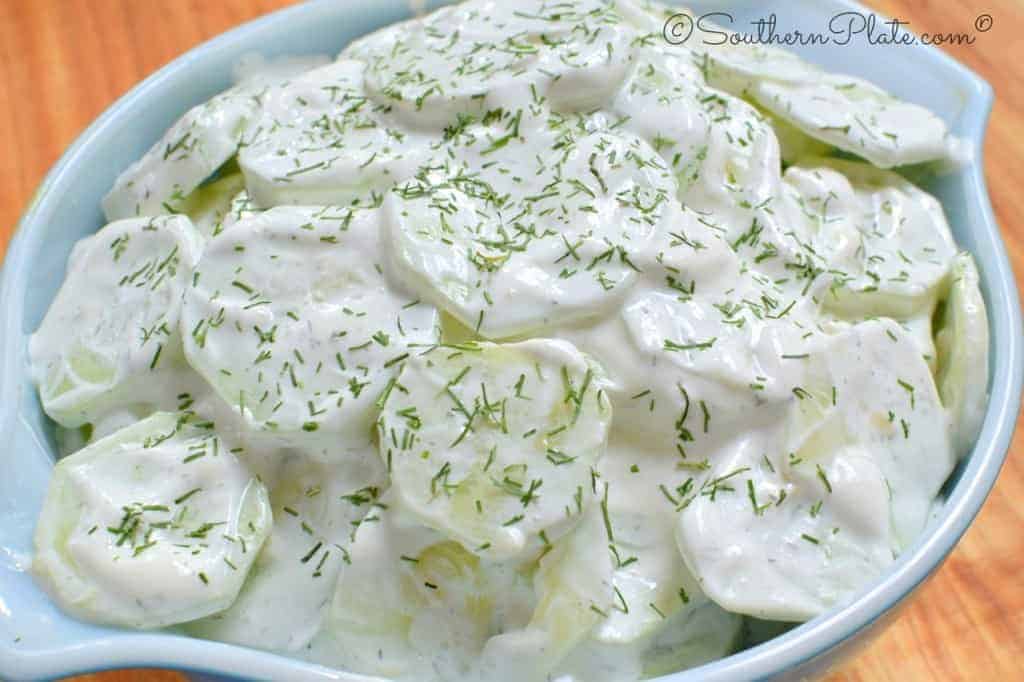 You see that bowl of cucumbers up there? I ate every bit of that. Sure, not in one sitting. It took me a couple of tries but I’m no quitter and I stuck with it until the bowl was empty. And I’d do it again, too, given half the chance. Creamy Cucumbers are just that good! Every now and then we go to a German restaurant and they serve this dish with your entree as an appetizer. I eat mine and my husbands.

This is a very light and refreshing side dish with the taste of cucumbers in a creamy smooth sauce. Ever since I showed it on a plate with Crunchy Chicken I’ve had tons of comments and emails from folks asking me what it was. Most people thought it was a potato dish but alas, it’s even better and as easy as stirring a few things together in a bowl. I’m happy to share it with you today!

If you want to hop to the recipe, scroll down to the next pic. If you want to hear a story about friendship, keep reading and we’ll all get to the cucumbers after my tale has been told. Ready? Here goes 🙂

I’ve had a lot of friends in my life, and they’ve each been a blessing to me. Today though, as Katy has her friend Sara Jane over for what has turned out to be a marathon sleepover (an afternoon turned into two days and that turned into just one more night and just one more day) I am watching the two of them play and can’t help but remember one particular friend from the old old days.

So I followed the rules. I fretted over the rules. I kept a close watch on that line that separated “following” from “breaking” and I stayed as far away as I could. It was quite easy to see the line most days though, because my brother and sister were having a dance off on it. We’re still not sure who won…

And then came Mary Anne. She was bold, daring, independent, stood up for herself and anyone else she felt needed standing up for (that was usually me), and seemed to be so busy living her own life that she didn’t even notice there were lines. Mary was on one end of the spectrum and I was on the other. Together, we helped pull each other just enough towards the middle to balance things out. We were a good combination. My excessive blah balanced out her little too crazy.

Mary Anne taught me how to have fun. Riding through the woods on four wheelers fun. Matching outfits fun. Electric Blue mascara and Bon Jovi as loud as it can go fun. Crazy-stupid-but-not-life-threatening-in-any-way fun.

In our younger years slumber parties at her house were the kind you talk about thirty years later because the ghost stories still make your heart race. Middle school for Mary meant a lot of time in the office because during those horrendous bully years, she met ’em all on the blacktop on behalf of those that she felt couldn’t.

Her home life was the stuff of tragic Southern novels so at one time we both had maps for escape plans written out and I had canned goods hidden in my room should she need to make a break for it.

The first day of high school, Mary and I were two of only eight students who transferred over from our county middle school to the “city” high school. I walked in, all excited carrying the trapper keeper which matched hers – horses in full gallop with manes blowing in the wind. Mary Anne spotted me, walked over and snatched it out of my hand before tossing it in the trash atop hers. “Trust me. I got here early.” Apparently, trapper keepers were major no-nos at our new uppity school and Mary Anne had taken the first hit to avoid us both having it.

One time, she had to work at her parents stables so instead of spending the Saturday alone hard at work, she invited friends and made it a party. I think about it now and see my 16 year old self scraping out horse stalls and laughing with some of the best hearted kids in school and can hardly recall a day when we had more fun.  No plans on a Friday night? All you needed was Mary Anne and a car and just driving around town was a party. She was crazy in all the good ways mostly because she came from background that was crazy in all the bad ways, so she knew the difference.

Boys I dated didn’t have to worry about my brother (he barely acknowledged I existed) but Mary Anne, should they bruise my heart. And they actually did worry about her because Mary Anne was not someone you wanted to cross. I was one of the rare folks who had her undying loyalty and still am, though she lives a few states away. 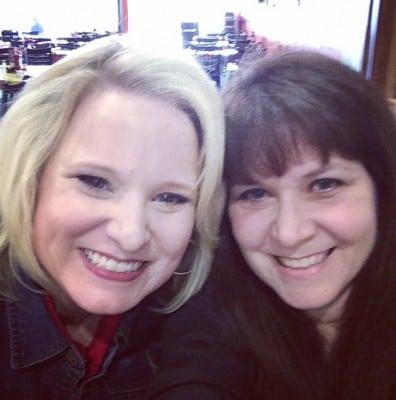 And now I see Katy Rose and Sara Jane. Fortunately, Sara Jane comes from a good home and family that loves and adores her. She is respectful as the day is long and is quick to listen and do what she is told when the time comes… But that Sara Jane is a firecracker. She does not abide by injustice (Lord help any man who crosses her later in life) loves hot sauce on everything, sings at the top of her lungs even when she has never heard a song before, tells Katy to “get a grip” when she freaks out over whether or not her loose tooth is going to hurt, and then hugs her tight when a tear falls because even though her irrational fear of pain is irrational, Sara Jane loves her. 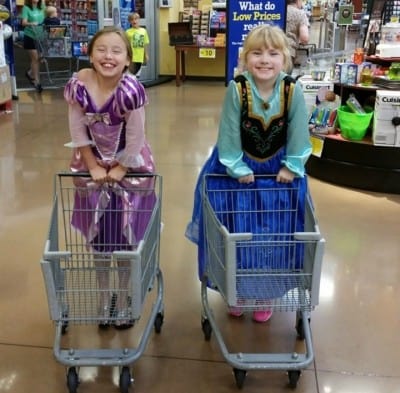 The two of them are crazy together. And it’s so much fun to watch. They are like Frick and Frack. Together, the best parts of each personality are magnified, and it is one of those epic friendships that is just a joy to behold. They’ve been fierce friends since they first met in first grade. In the early stages of their friendship, their different personalities used to rub each other the wrong way and they’d argue from time to time. But they both quickly decided that they didn’t like arguing with each other and so they created a code. Whenever they would get twisted up in an argument or riff, one of them would say “Hot Cocoa” and that would remind them both how much they mean to each other and they’d let it go and apologize. Hot Cocoa…the brilliance in that from two so young amazes me. They are so much alike and so very different at the same time, and they love the alikeness and differentness in each other.

Theirs is the kind of friendship you can look at and just know they’re going to be old ladies together.

I had my Mary Anne. And I’m so glad Katy has her Sara Jane.

Now let’s make creamy cucumbers. This one comes together fast so don’t blink because you’ll miss it. 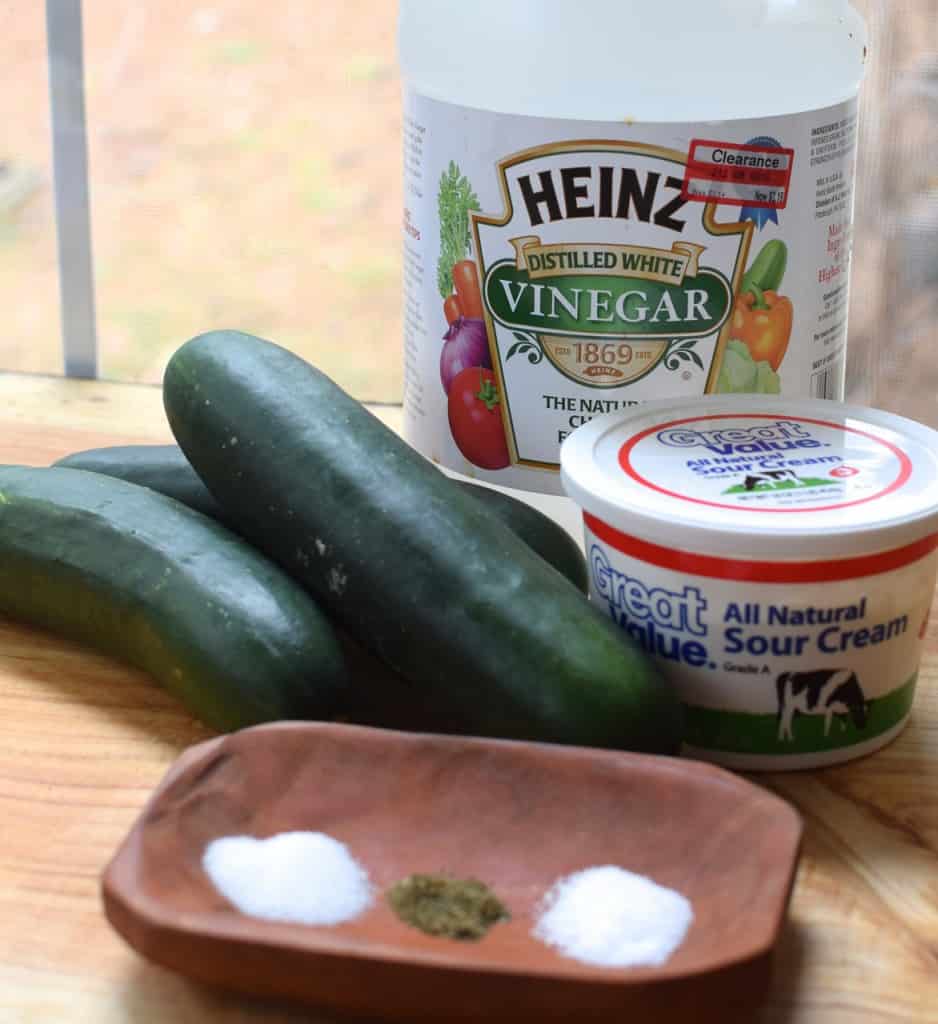 And hey, waaaaay too much salt is pictured here but it’s been a long year so far so bear with me (and yes, I realize it is February). 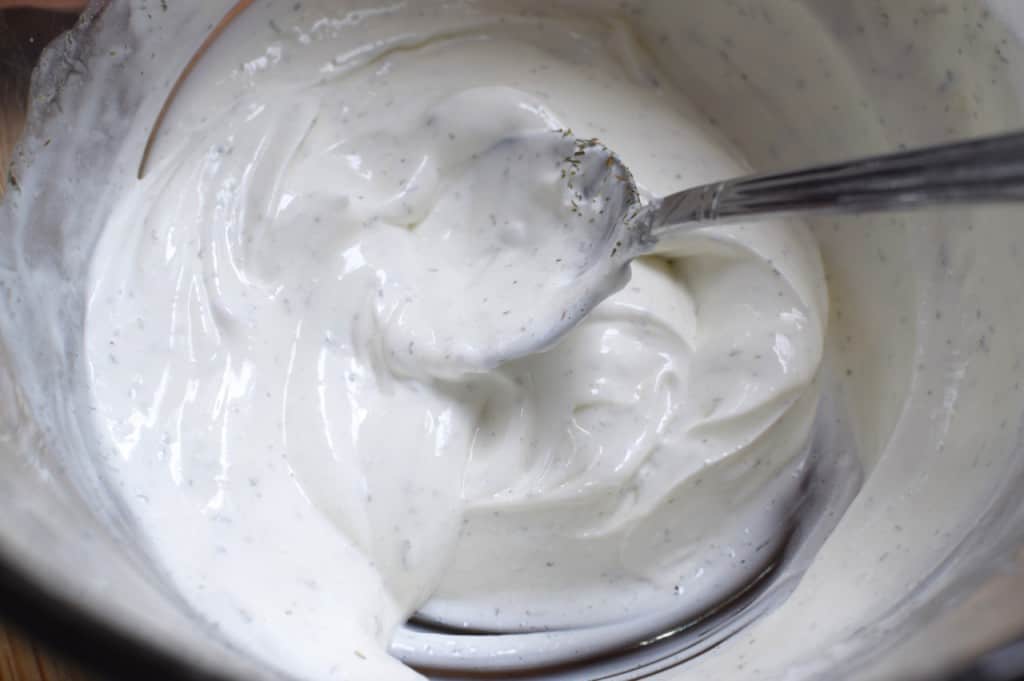 Stir everything together except the cucumbers. 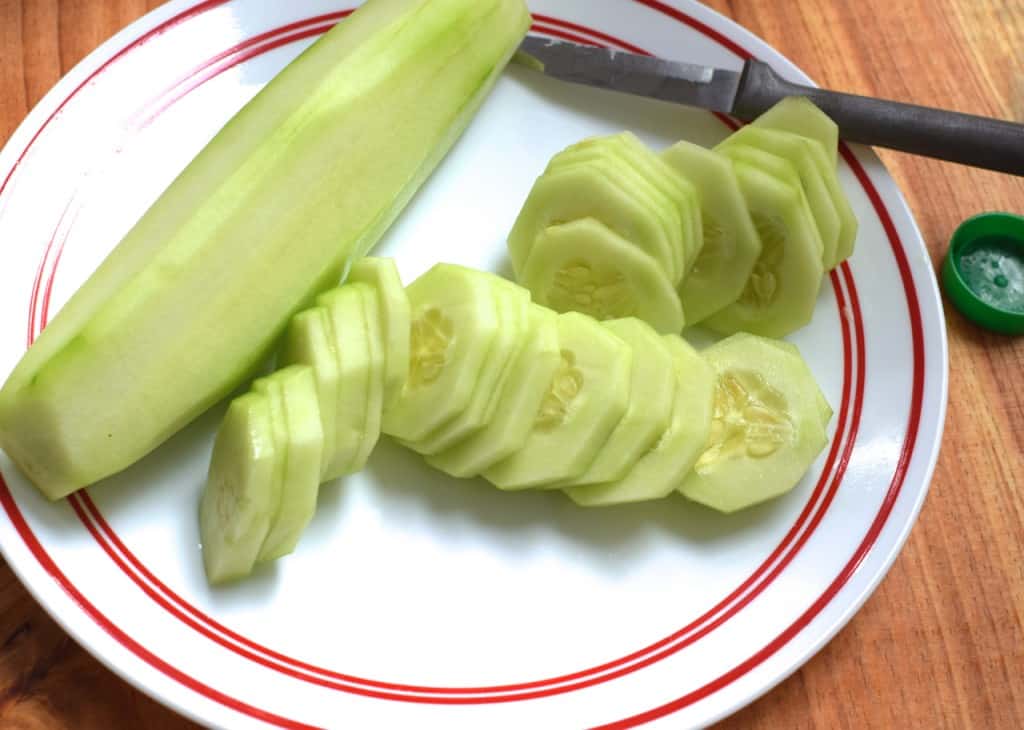 Peel and slice your cucumbers kinda thin-ish if you’ve a mind to.

If you like thicker cucumbers or even cucumber chunks, knock yourself out. I set out to slice thin slices and then I start going down my mental to do list and my slices get progressively thicker, then I remember what I’m supposed to be doing and they get thin again. And it works.

Put cucumber slices in a bowl and pour dressing over. Stir well to coat. Serve immediately or cover and refrigerate to serve later. 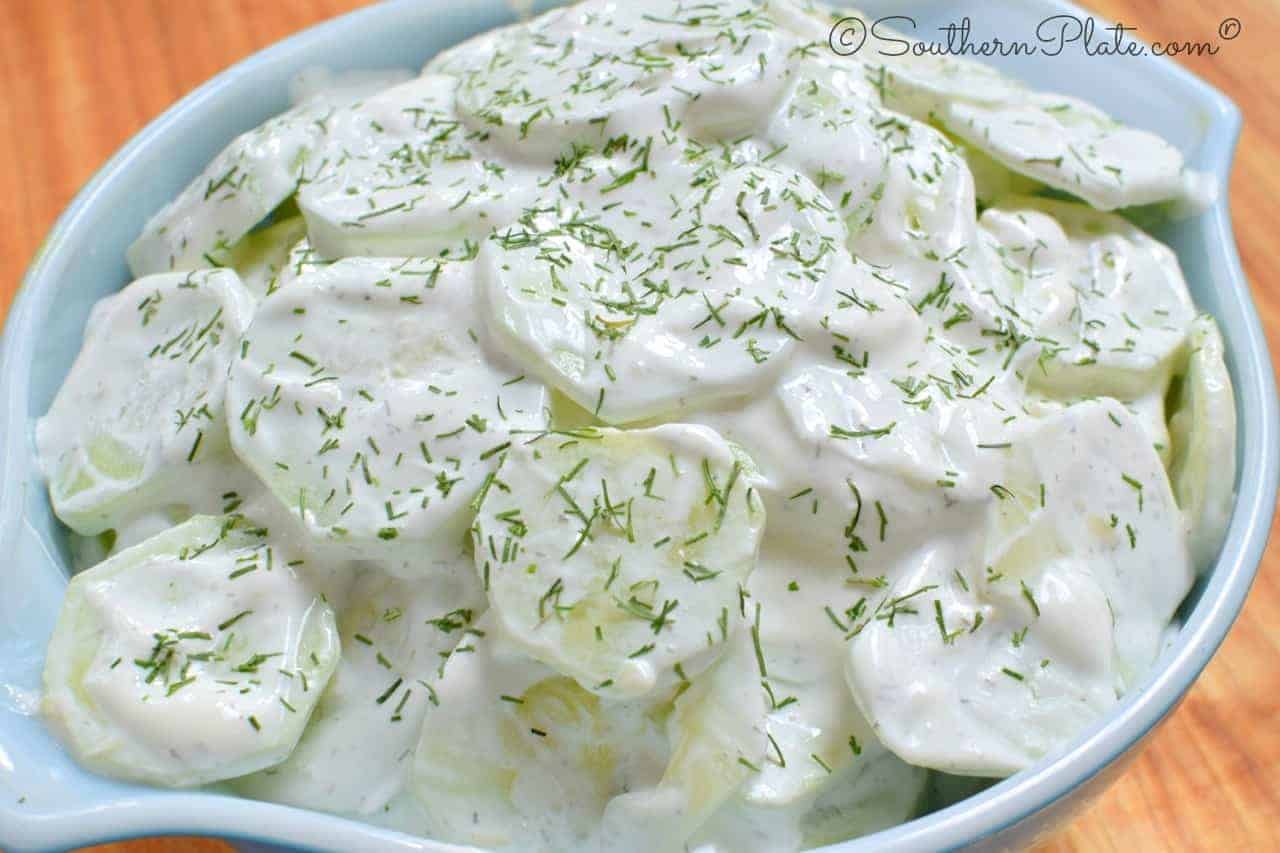 “I cannot even imagine where I would be today were it not for that handful of friends who have given me a heart full of joy. Let’s face it, friends make life a lot more fun.”

Do you have a crazy friend? Or maybe you are the crazy friend! I’d love to hear your stories in the comments below!

< Previous Post
Answer Questions : What do you do to be frugal in the kitchen?
Next Post >
Sock It To Me Cake – And How To Give Yourself A Snow Day