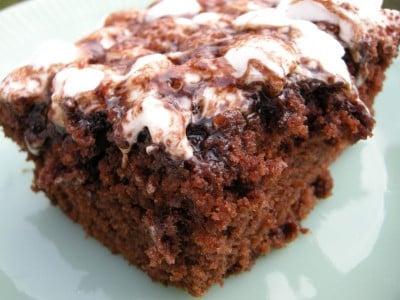 We have an odd sense of humor in my family. Perhaps it’s not odd, really, so much as it is constant. We are forever looking to laugh in any given situation. I blame it entirely on my mother, who made sure each day growing up was filled with as much laughter as possible. 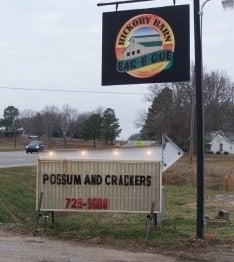 My brother is no different. What began as a joke has now turned into a full fledged slogan for his restaurant, Hickory Barn BBQ in Athens. A few months back, he put “Possum and Crackers” on his sign out front just to see what his wife would say. This sign caused quite a stir as folks began stopping just to have their picture made next to it.

Requests for the dish began pouring in and disappointment at finding it was a joke surprised us all. Bill quickly added possum and crackers and possum and cheese sandwiches to the menu (don’t worry, its really just bologna) and delighted his customers by placing the slogan “I ate the possum” on his T Shirts as well.

Aside from the possum, all other cuisine at the restaurant is as authentic as it comes – From the chicken and ribs he won Grand Champion for at the Jack Daniel’s cook off to the homemade cakes served for dessert. The cake varies by week but the recipe always comes directly from our family cookbook, often ones which have been featured on SouthernPlate.com. Elvis Presley cake is a longtime favorite as is my grandmother’s Peanut Butter cake along with many others. This weekend, they’ll be serving up my Mama’s Mississippi Mud cake. In case you can’t make it out for a slice actually made by Mama, here’s the recipe.

This is a longer ingredient list than what you’re used to from me but its worth it so just sit back and take notes, you’re gonna have some happy campers in just a bit! 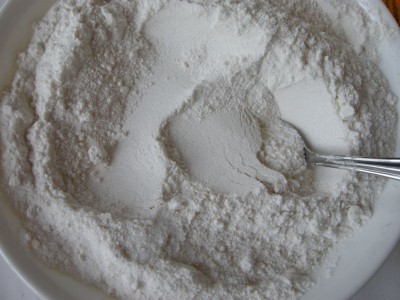 Stir together salt,baking soda, and flour. The recipe says to sift this together. Well folks, I’m a stirrer, not a sifter. Makes things a bit easier and I don’t have to dig in my cabinets to find the thing.

T’ain’t nobody complained yet! 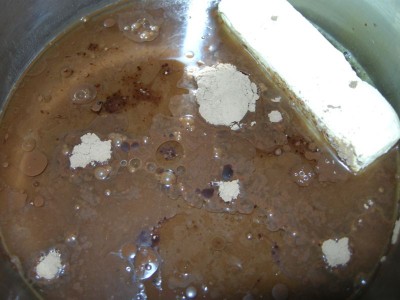 Bring margarine, oil,cocoa, and one cup water to a boil in a sauce pot, stirring constantly. 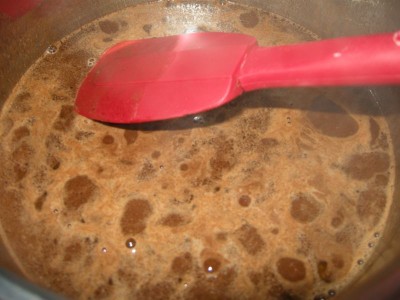 Remove pot from eye and turn off heat as soon as it comes to a boil. 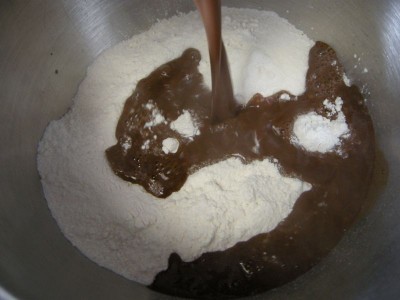 Place flour mixture in mixing bowl and pour hot mixture over it. 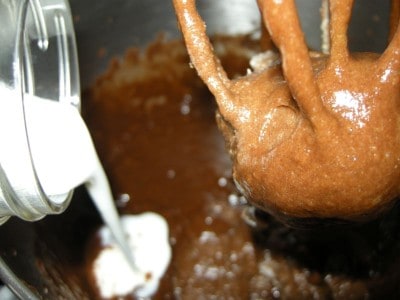 Add buttermilk…
Now honestly, have you ever once had a recipe that called for buttermilk that wasn’t good? I sure haven’t!
To a Southerner, adding buttermilk to something is about like tossing in golden nuggets! 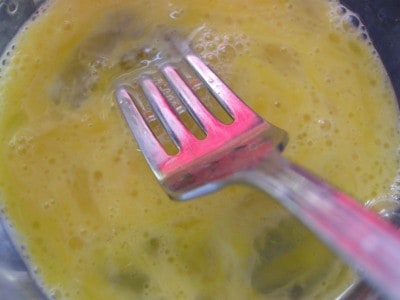 Beat your eggs in a separate cup. 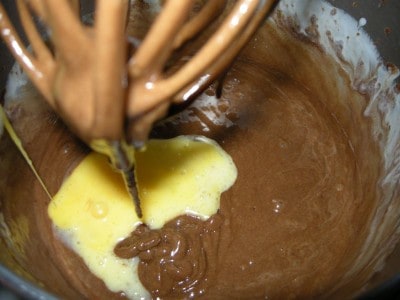 Add eggs and water called for in recipe and immediately turn your mixer on so the eggs don’t have time to
cook in the hot mixture. 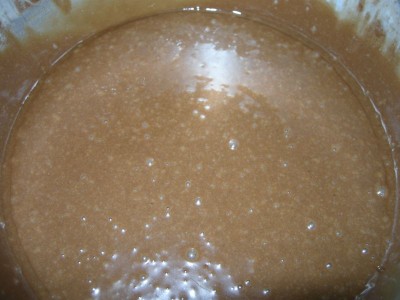 It will look like this when its done. You really need to take a lick on accounta’ you’d hate to
feed your family and friends something you don’t know for a fact tastes good in the batter bowl :). 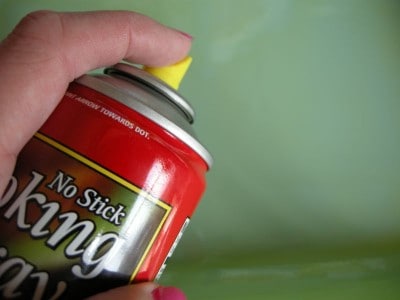 Grease a 9×13 inch pan. You can use shortening for this but I just use nonstick cooking spray. 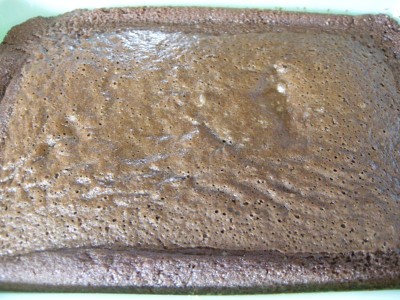 Pour into a greased and floured 9X13 pan and bake at 375 for 25 to 30 minutes.
Nah, I didn’t grease my pan either…seriously guys, this isn’t that complicated ~winks~

Try to time your icing so it is ready as soon as your hot cake comes out of the oven for best results. 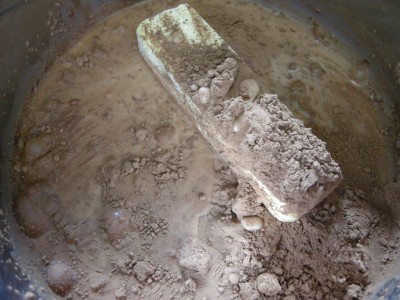 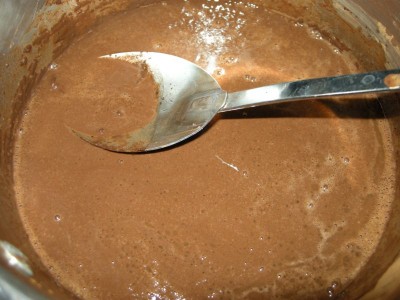 Stir constantly and bring to a boil. 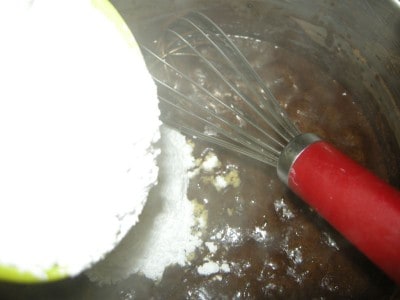 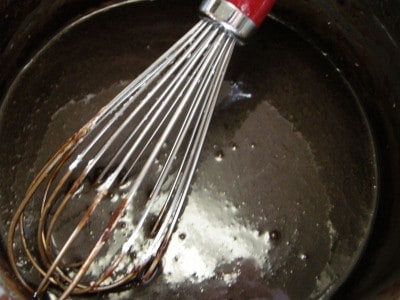 Cover hot cake with marshmallows. Kids love to do this part!

Drizzle hot icing over the top and you’re done!

Sift flour, sugar, salt, and soda together. Bring margarine, oil, cocoa, and one cup water to a boil. Add to flour mixture. Add eggs, one teaspoon cold water, and buttermilk. Mix well. Pour into a greased and floured 9X13 pan and bake at 375 for 25 to 30 minutes. Top with marshmallows while warm. Pour icing over top.

Combine margarine, cocoa, and milk. Bring to a boil. Add sugar and mix well. Add vanilla. Pour over hot cake as soon as it come out of oven. Note: Chopped nuts are great added to cake. 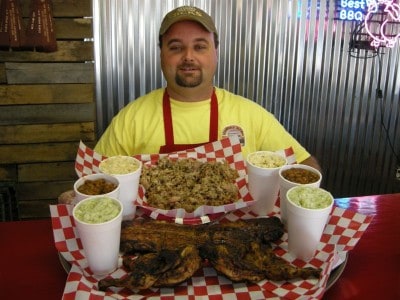 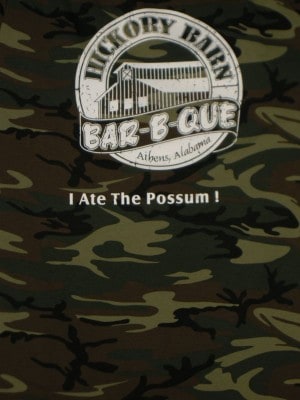 Attitudes are contagious. Is yours worth catching? ~Southern Plate Reader, Granny K.

This is where I order my business cards from.

Using this link, I just ordered 2500 more for a little over thirty dollars!

< Previous Post
Eat Out On The Cheap & More Money Saving Strategies!
Next Post >
The Care And Feeding Of Quilts And Children
Subscribe
Login
51 Comments
Inline Feedbacks
View all comments

My son ate the mud cake at Hickory Barn the last time he went with his Mimi. He loved it. I told him I now have THE recipe. He said, “you better hurry up and make that, but don’t forget the marshmallows!” He is 7 and goes for the ribs. I cant wait till this weekend. My mom’s out of town till late Friday and said we’d better not go w/o her!

You really shouldn’t send recipes for chocolate cake to a pregnant lady due in 3 days!!! I had to RUSH to the store IMMEDIATELY to buy everything I needed for this cake and I made it last night. I left a couple pieces at home for hubby and two-year-old daughter and brought the rest to work…it was gone within one hour. BIG HIT! Christy Jordan, doing her part to keep the pregnant ladies of the world fat. LOL!! Thanks, Christy!

I really thought it was possum! I was expecting to see another recipe for BBQ possum or something!

Oh how I wish I could have some southern BBQ right now!

Christy,
the story is great and your brother has figured out the right way to attract customers and still be on the good side with humor!
This cake looks great…it´s a shame I am too far away to go get a bite in his restaurant!
Love, Verena

OH MAAAAAAAN!!!! This is SO not fair to those of us in California. Rubbin’ salt in the wound … today our taxes went up … bad enough. But that picture! Almost too much to bear ..

I’m packing up my husband and moving to Alabama. We’ll let the kids know the new address/location via email – but there won’t be much leftover by the time they roll up!

OOH GOODY!!! One more person to feed!!!!! Stop here first, you’ll need a good meal to keep your strength up!!!!

Hey Christy, I was in Rogersville, AL this past weekend and I remember driving right by your brothers restaurant!!! I am so excited to know where it is!!! I live in Murfreesboro, TN and in the spring/summer we head to the river almost every weekend…I will definitely be stopping in to check it out the next time that we pass through Athens!!!

I absolutely love your site and your recipes are delicious!!!

My entire family lives in Rogersville except for us! My parents have a place on the river and both grandmothers live across the street!!!

Don’t you just love going in that Fred’s? lol

Thank you so much!!
Christy 😀

My parents have a place on the river too…we love it there!!! They live on Ramblewood Dr. and I am all about the Fred’s right there!!! I was in there a few times this past weekend…LOL!!! I also LOVE Pam’s shoe store!!!

I was gonna mention Pam’s but didn’t know if you’d know what I was talking about! lol
They are neighbors of Mama and Daddys, I think. I’m gonna have to look up Ramblewood drive, I’m thinking its one of the new subdivisions by my parent’s place!

Katie
Reply to  The SouthernPlate Staff

Well, maybe we’ll run into each other when we’re out and about in Rogersville!!!
I’m making your Chicken and Dumplings tonight…my hubby is soooooo excited!!! :o)