It didn’t matter if my Grandaddy had been diagnosed with terminal cancer, he had no intention of dying from it… 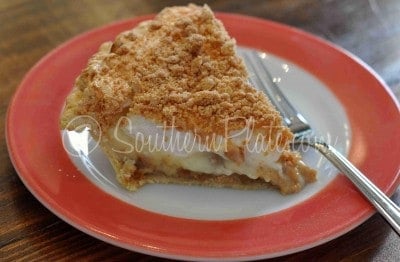 My Grandaddy is someone I try not to talk about much in public because he will always be a very tender subject to me. You’ll read more about him in the last chapter of my book where I go into detail about the type of person he was and why he meant so much to me. In the grand scheme of things, though, Grandaddy was no different from the rest of my family, a consistent positive attitude of gratitude towards life.

Grandaddy built rocket engines and tested them in firing pits most of his adult life and enjoyed each day of his job. Still, when he retired he had a lot of people thinking he’d miss it and have a hard time adjusting to the change. Grandaddy always met such concern with his usual wit and used to say “Lots of folks told me I’d have a hard time getting used to being retired. I retired on Friday, by Monday morning I was used to it.”

You ever see folks whose faces are all pinched up like they are just waiting for an opportunity to complain or find fault in something? My grandaddy was just the opposite. He was one of those folks who was always ready to smile, laugh, and tell a joke. One glance could tell you that about him, too.

But a career testing rockets doesn’t exactly bode well for a body’s state of health and my grandaddy was one of the first among his former co-workers to be diagnosed with cancer, on his birthday no less. He took it with such stride that one by one, as his co workers each received their diagnosis, they always turned to him with their fears and worries over the toll of the disease. “Jay, they say they don’t know how much longer I got left. Reckon how much longer you got?” Grandaddy got questions like this a lot and his answer was always the same “Aw, I got lots of time, I’m not planning on dying from this. I’m gonna live a long time. I still got lots of fishing to do”.

I’ll never forget that first Christmas. The doctors told us to have ours early because Grandaddy wouldn’t be with us come December. So we had a bittersweet holiday celebration in November…and spent the next several years teasing Grandaddy about the lengths he went to in order to get his presents early that year.

At a time when his friends were taking to their beds, he and my grandmother finally built their dream house on the little piece of riverfront land they’d owned for as long as I could remember and moved to a town in Alabama known as “A Fisherman’s Paradise”. When the chemotherapy made him too weak to walk to the river, he bought a four wheeler and would park it right by the front door to ride down and fish off the pier several times a day with his trusty labrador, Sweetie.

Grandaddy did just what he planned on doing, he lived a long life, outliving the doctors expectations by many years and, sadly, outliving his friends as well. He had times of extreme health, where he’d gain weight and set off traveling with my grandmother. Sometimes he’d have to get treatments again and spend a little time in the hospital, where the nurses always left his room laughing and looked forward to seeing him again on their next shift.

I’ll never forget a doctors visit he told me about once. There was a man about his age in there obviously nervous and grandaddy got to talking to him. Turns out, he’d just been diagnosed. After hearing my Grandaddy had been diagnosed over ten years prior he asked him “What did you do when you found out? ”

“What do you mean what did I do?” Grandaddy had asked.

“I mean, did you get your will in order, did you make arrangements for your funeral?”

Grandaddy looked surprised at the man and shook his head with a smile at remembering that birthday all those years ago when a doctor had told him that he had terminal cancer. “Naw, I ain’t planning on dying from this.”

Grandaddy lived his long life and he got his fishing in, just like he had always planned.

A man who was told he was dying by years end spent the next decade showing us all a thing or two about living.

And while you’re living, lets celebrate. You don’t need a birthday or special occasion because you being alive and having folks to love is reason enough to do something special for them.

Today, I’m gonna make mine a peanut butter pie and I’m gonna bake it with a head and heart full of appreciation for how wonderful my life is because they’re in it and the knowledge that life is not just good, life is wonderful and so worth living. That’s how my Grandaddy did it. 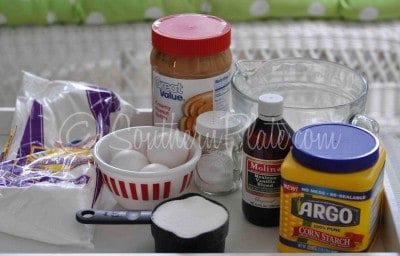 You’ll also need a deep dish pie shell and go ahead and bake that. 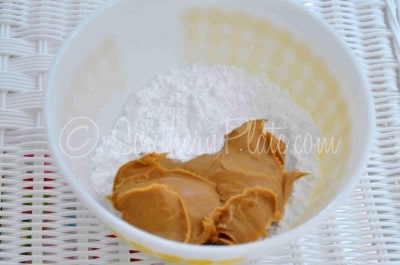 Place your peanut butter and confectioner’s sugar in a small bowl. 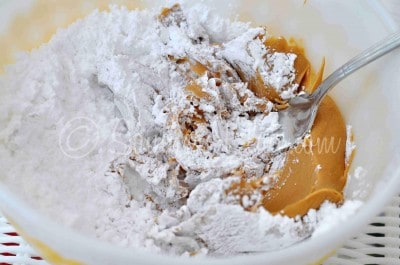 Now moosh it together with a fork. Moosh, moosh, moosh.

You’re just kinda mixing it all up here, cutting the sugar into the peanut butter. 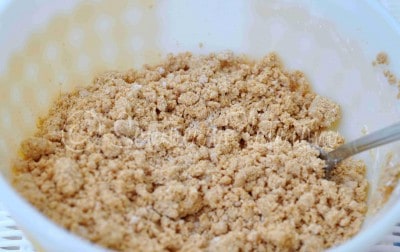 After a few minutes it is gonna look like this.

Now taste a pinch of it because that stuff is Goo-ooo-ood! 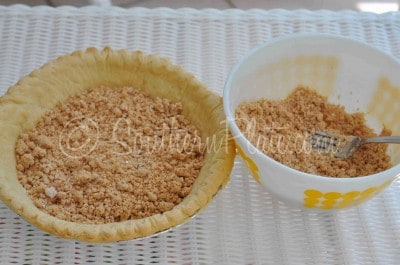 Sprinkle about half of that into the bottom of your baked pie crust. 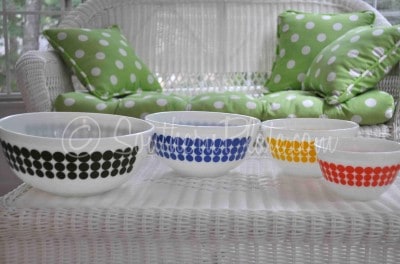 Oh, the bowl I’m using today is a vintage Pyrex one in a pattern called “New Dot”. They are pretty hard to find, especially the large green one. You can find the blue one all over the place, it seems. Took me about a year to get a whole set of these. Aren’t they pretty?

My little loveseat in the background has a a new polka dot cushion and pillows on it, too. I went to a store last week because my cushions were in pitiful shape and I hit paydirt when I found these pretty lime ones on clearance. $12 a cushion! Weeeeee! 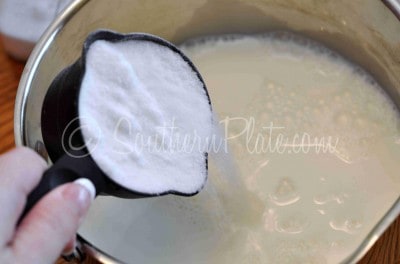 Now we gotta make our custard to go in our pie. You can call it a pudding if you prefer.

Place your milk into a sauce pot and add your sugar. 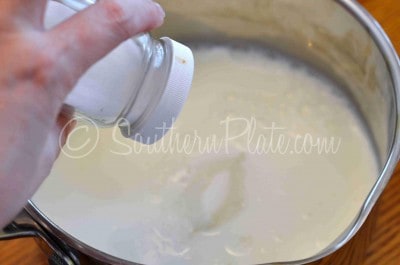 Add a dash of salt 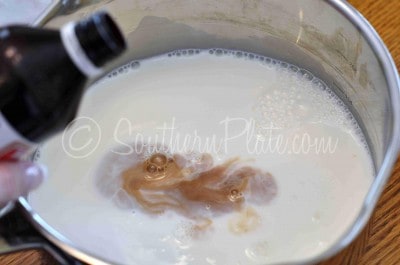 This is supposed to be a teaspoon of vanilla.

As you can tell that is a pretty generous teaspoon! ~giggle~

I never actually measure out my vanilla anyways. I just give it a little pour and figure what is meant to be in there will get in there! This is kind of a way of leaving the vanilla content in God’s hands. ~winks~ 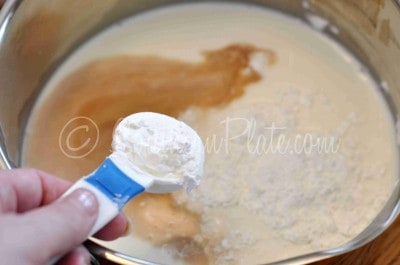 Add in your corn starch. 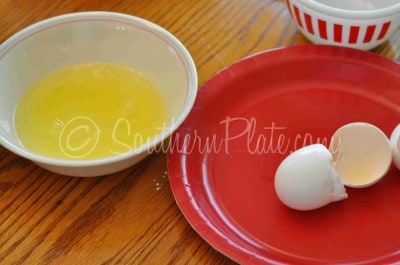 Now we’re gonna separate our eggs, putting the white in a bowl and putting the yolk in our custard.

Make sure you don’t get any yolk in your egg whites because we’re gonna make a meringue out of that in just a few minutes here and it won’t make if there is any yolk in it.

You can get fancy little egg separators that let you just dump the whole egg in there and it separates it for you but I just crack my egg in the middle and hold a half of it carefully to let the white slip right off, then I pour the yolk into the other half and gently tilt it to let the remaining white (if there is any) get in the bowl as well.

Next time you’re making scrambled eggs, give this a try  (because you’re going to mix them up anyway so it doesn’t matter if you don’t do it right) and with a little practice you’ll be separating eggs using just the shell like a pro!

I’ve started letting Katy Rose crack open the eggs for recipes ever since she said “Mama, when I grow up do you think I’ll be big enough to crack eggs?” Well goodness, I had no idea it was a life dream of hers! So I started letting her do it and she is getting better but goodness do we have a mess. It is fun, though, seeing her look of delight as she cracks that egg with all the grace and finesse of a bull in a china shop. The first few were more like little egg grenades but she has since become much more gentle with it and I always brag on her regardless (and pick out the pieces of shell when she isn’t looking!). 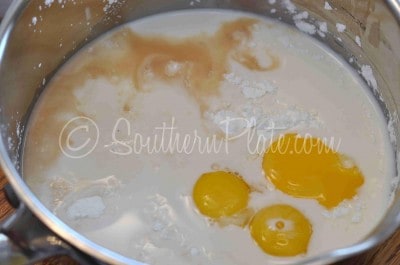 Put your yolks into the pot as well. 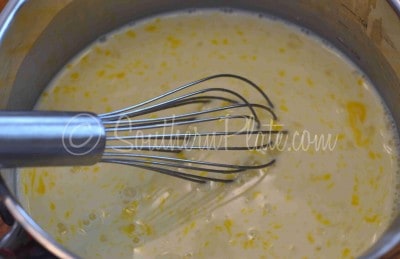 Give that a good stir with a whisk. 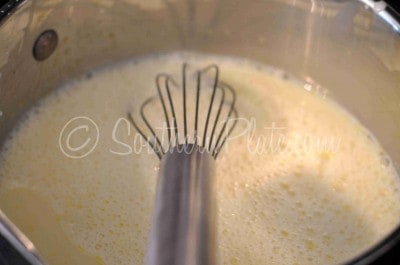 Put this over medium heat and stir with a whisk until thickened, about ten minutes or so. STAY WITH IT as it will scorch and it will thicken up REALLY quick, usually when you are about to the point where you are wore slap out from dealing with it and ready to give up the ghost.

Okay so it isn’t that long but when you have things to do it feels like it. 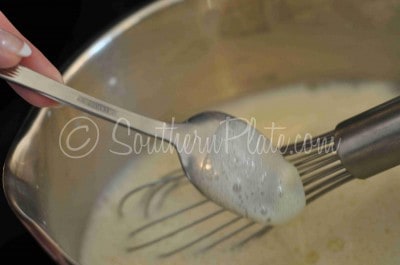 This is a poor example of a pic because of all of the bubbles from my vigorous stirring but when it gets thicker, you can tell by dipping a spoon in it and seeing if it coats the back.

Imagine a smooth and creamy coating on the back of this spoon. If you have a hard time imagining that, squint your eyes a bit as you look at the photo and that should help. 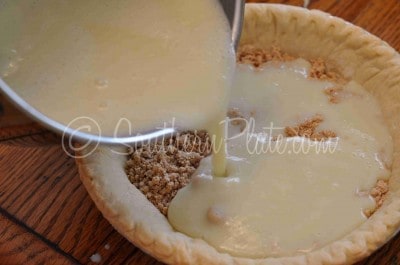 Now we’re going to pour our yummy homemade pudding over the peanut butter crumbles in the pie shell. 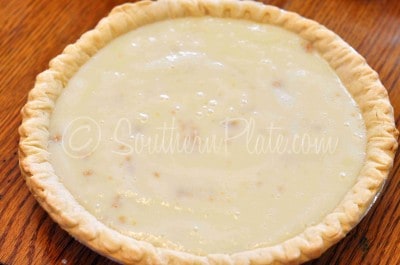 Glory Be, isn’t that pretty? 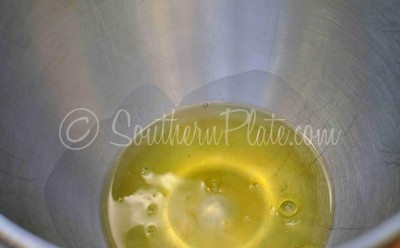 Time to make our meringue! Place your egg whites in a mixing bowl. 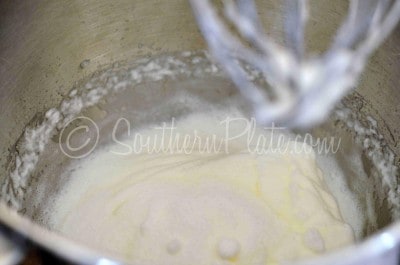 Beat until gooooood and foamy, then add your additional sugar. 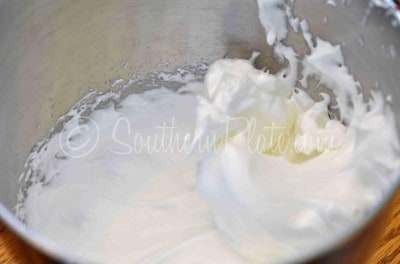 Then beat until soft peaks form. You can tell it is a soft peak when you pull the mixer up and it forms a point that falls slightly back a bit, like the loop on the top of a Dairy Queen ice cream cone.

Okay so I didn’t stop at soft peaks here because I was busy with the kids. ~shrugs~ It happens. My meringue has stiff peaks now but we’ll make do just fine, won’t we? 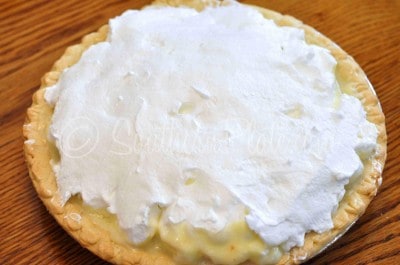 If I had soft peaks it would spread all nice-ified but now we gotta force it a bit but it still works. Your goal is to spread the meringue over the entire pie, being sure to seal at the edges (make sure it touches the pie crust all around).

Whenever you do something like get distracted and end up with stiff peaks instead of soft, I want you to picture some sweet granny shaking her head with a grin “Hon, it don’t make no nevermind, still gonna taste jes as good” 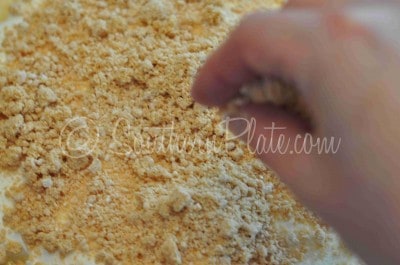 Now sprinkle the rest of your peanut butter crumbles over the top of the pie. 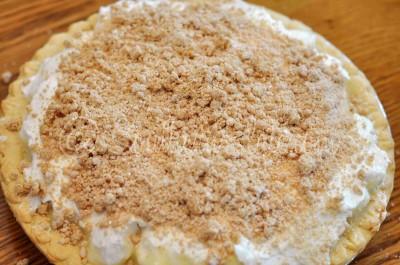 Try not to eat it now because as good as it looks and smells, its about to be even better.

Bake that in a 325 degree oven for about thirty minutes. 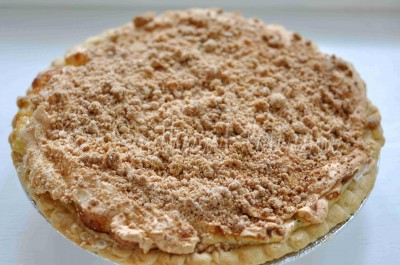 The only thing that would make this pie any prettier is a sweet granny holding it and smiling with twinkles in her eyes.

Refrigerate for several hours before serving. DIG IN! 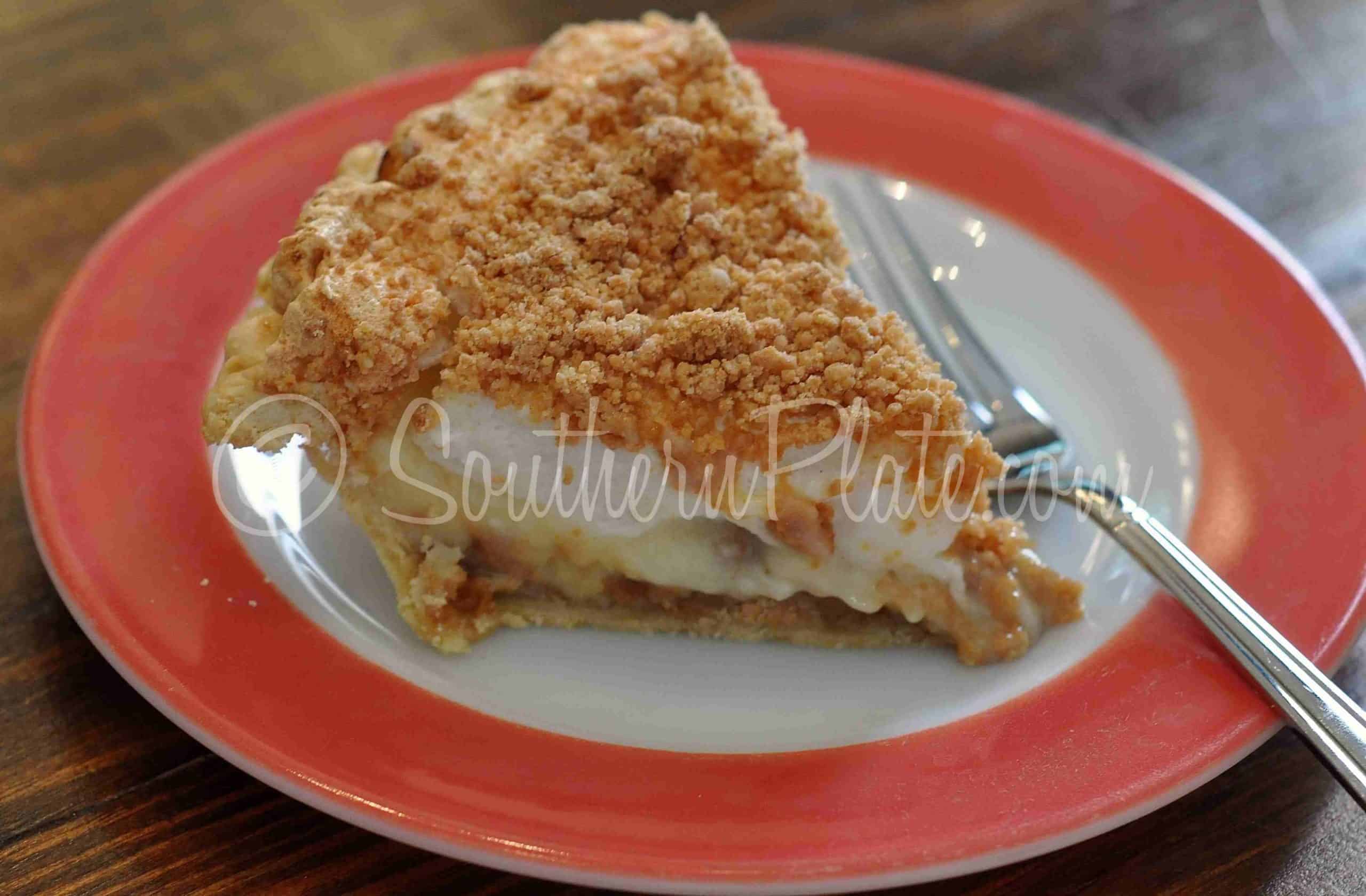 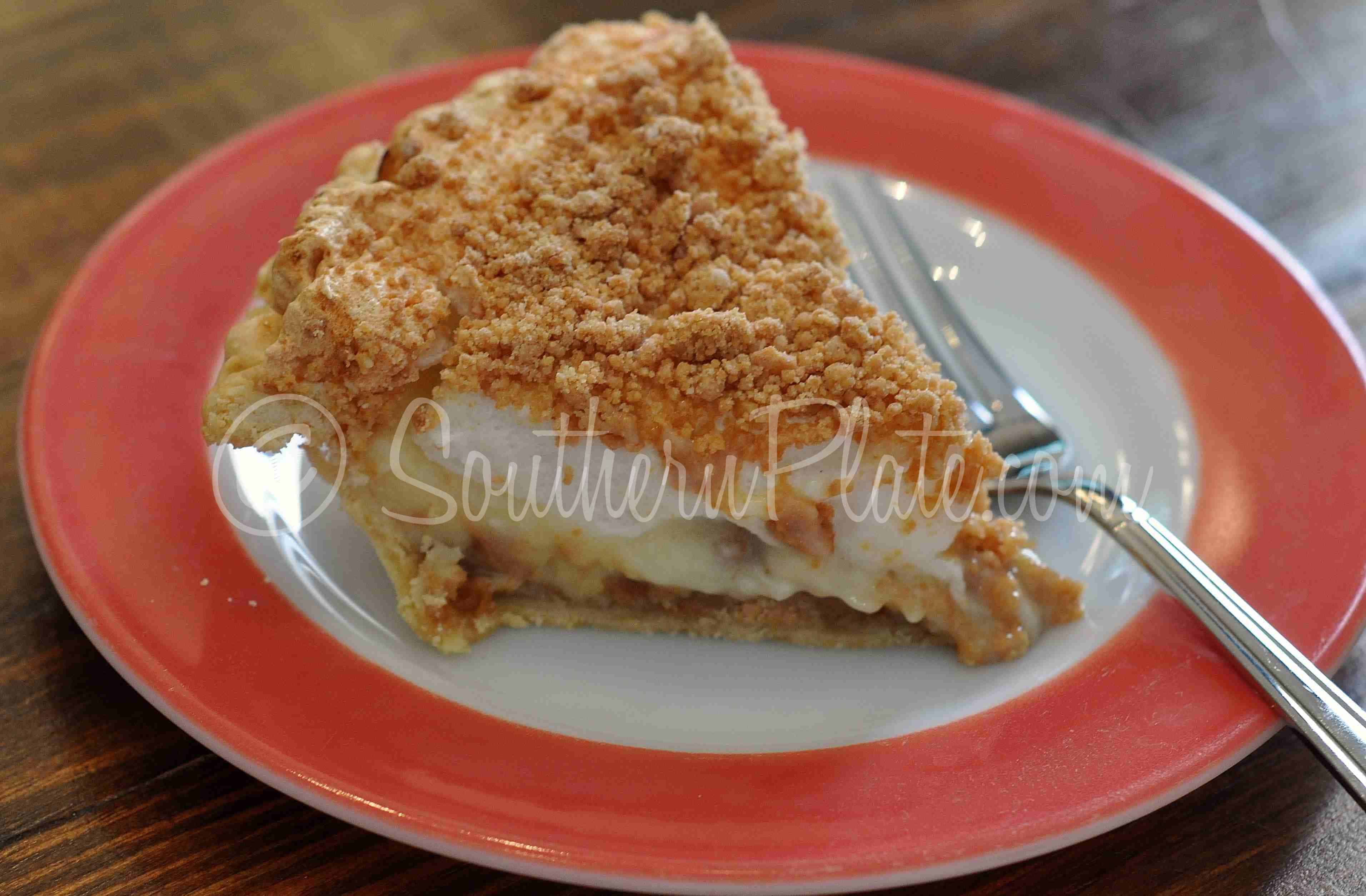 If you don’t see light at then end of the tunnel,

march down there and turn it on yourself!

Submitted by my friend Tookie. Submit yours by clicking here.