Here’s everything you need to know about natural sweetener, Swerve, and other sugar substitutes for baking. 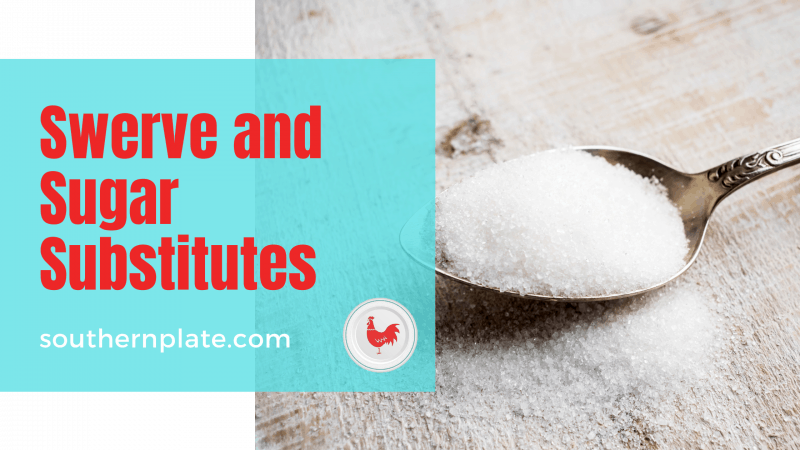 Many people ask me how they can decrease the sugar in our scrumptious recipes or what sugar substitutes I use in my own cooking and baking at home. They may be asking because they have had health issues where they are supposed to avoid sugar or decrease it OR they want to avoid having those issues and be healthier. That makes a lot of sense and it is smart to be proactive about your health.

For the last year, I have been using a natural sweetener called Swerve. The video above talks about the product. Before we begin, let me just say that I am not getting paid for this post. I just wanted to share it since people were asking and I have had good results with it. I have lost nearly 20 pounds now and using Swerve has been one thing that has helped me get there. Switching to low-carb recipes like cauliflower rice has also helped a bunch.

So without further ado, here are some FAQs about Swerve and other sugar substitutes for baking.

Swerve is a natural sweetener made from powdered erythritol and ingredients found in select fruits and starchy root vegetables. It’s a calorie-free sweetener that contains no artificial ingredients, preservatives, or flavors. It’s also non-glycemic, which means it’s safe for people with diabetes to use as it has no effect on blood sugar or insulin levels. As an added bonus, it’s very similar in taste and appearance to granulated sugar. In fact, it even caramelizes like sugar.

Why do I use Swerve?

How do you substitute sugar for Swerve in baking?

The best part is that you can swap sugar and Swerve on a 1:1 basis. So 1 cup of sugar equals 1 cup of Swerve.

Does Swerve sweetener have an aftertaste?

No, Swerve tastes just like sugar so don’t expect any bitter aftertaste.

Where do I buy Swerve?

I typically buy Swerve on Amazon (here is a link). If you decide to purchase it through that link Southern Plate gets a very small commission.

How do you store Swerve?

Store Swerve in an airtight container either in your refrigerator or freezer to keep any lumps from forming.

What are some recipes that use Swerve?

Here is just a sample of recipes where you can use Swerve as a sugar substitute:

If you ever want to troubleshoot when baking with Swerve, check out these baking tips from the official Swerve website.

What are some other sugar substitutes?

Now, Swerve is my favorite sugar substitute, but there are several available:

What is the healthiest sugar substitute for baking?

What is the unhealthiest sugar substitute?

The unhealthiest sugar substitutes for baking are artificial sweeteners like sucralose (Splenda), saccharin (Sweet’n Low), and aspartame (Equal or NutraSweet).

Erythritol (the main ingredient in Swerve) is the most similar taste to sugar and you’ll find they’re basically indistinguishable.

What can I substitute for granulated sugar when baking for a diabetic?

What is the best brown sugar substitute?

The Pioneer Woman has a great list of the best brown sugar substitutes, which includes:

How do you substitute sweeteners for sugar in recipes?

Many sweeteners are a 1-to-1 substitute. But to see about your particular artificial sweetener I found a great article about baking and cooking with sweeteners from All Recipes here.

And for your reference here is a table from the Swerve website that shows you how to substitute natural sweeteners in recipes: 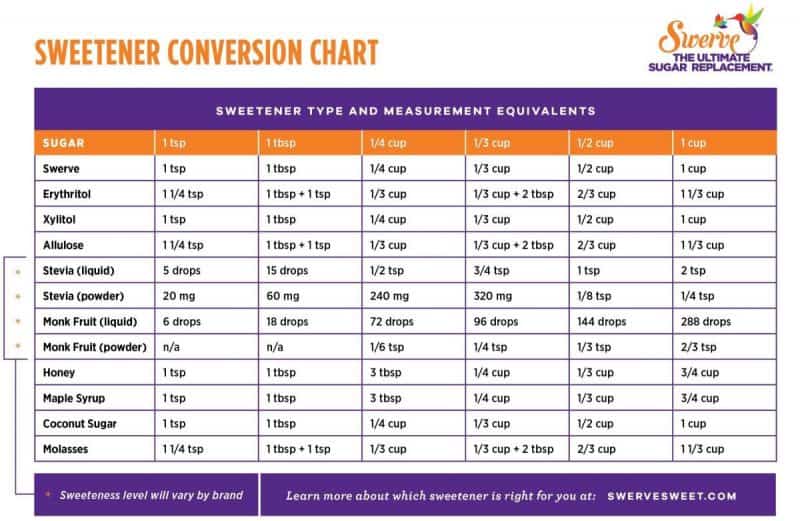 This is not a paid advertisement for Swerve. It is just my opinion and is meant to be educational only. Always check with your doctor to see if this sweetener is right for your situation.

I love Ideal sugar substitute. It has zero aftertaste.

I have bought Swerve but after opening the package and using once it turned hard as a rock. Much like brown sugar can do. The package was tightly closed but still went hard. Is Swerve actually like Stevia?

Hi, Linda. It’s too bad it has been one month, and you haven’t gotten an answer.

I will sometimes cut a recipe down to make a small amount so that, if I’m disappointed, I haven’t wasted too much of an expensive ingredient in the process.

Hi Cynthia, thanks for your suggestion. It’s a good idea. Glad you shared. I try my best to get through comments in a timely fashion but don’t always live up to that with all the other things I am doing to keep the site going. So appreciate your patience and for helping out.

Can I use sugar instead of serve

Hey Stacey Lynn!
Do ya’ see me wavin’ at ya’ from way over here in GA? I do this occasionally to others, so I’m officially adding you to my list. 🙂

I bought some powdered Swerve several months ago, but have not used it yet. Maybe I am waiting for it to “cure”? Maybe, huh? I do this more than I want like to admit, but in this case it is fear of the unknown – that consarn monster that pops up and stops anymore thoughts of trying. If I use it in something baked, will it be a complete flop and I wind up eating it with a spoon? I’ve seen several recipes for banana bread, but have I tried any? Of course not! Noooooooo. 🙁 FOTU monster arrived. Maybe it can be scared off if I get a few answers from you. Does Swerve cream up fluffy when added to butter and beating with an electric mixer? Does it make any difference whether I use granulated or powdered in baking? And if I have a little too much (overdoing my treat) will it result in diarrhea, like some other sugar replacements can cause?

Thanking you in advance, sweetie.

Hi Linda, thanks for your comment. Sorry for the delay. Have 400 more comments waiting for me to answer. Just go through them as fast as I can. I think we all have been in the same position you describe more than once! Using powdered sugar in place of granulated sugar typically should only be done in baked goods like cookies, brownies, bars, muffins, and quick breads. For more info about Swerve specifically I will go to https://swervesweet.com/. I don’t bake with Swerve all the time but when I have questions I use that site. Hopefully that is helpful 🙂