Before we get to the Cuatro Leches Cake (Four Milk Cake)…If you’re on Facebook or Pinterest and could use one of those buttons above I’d surely appreciate it! 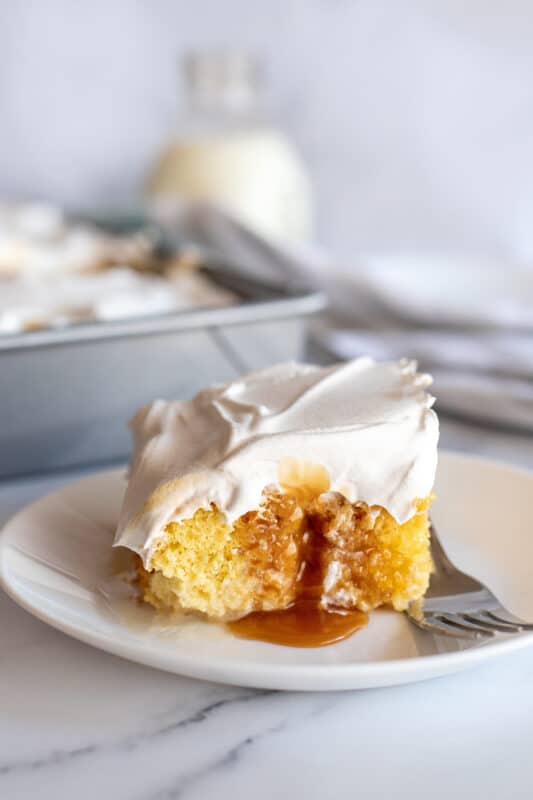 Some see this as a bad thing, some see it as a good. I see it as what it is. Chances are, you’re pretty different, too, maybe in some of the same ways, maybe in different ones.

Wouldn’t life be boring if we were all stamped out copies of one another.

I’m not putting a question mark at the end of my previous sentence, even though it is technically a question. It is a question meant as a statement, intended to get you to thinking but true enough that it requires no answer.

So I’ll just ignore all of the grammatical rules I was taught in college in lieu of some better ones I just made up on the fly.

Because I said so. Don’t you agree – period. Of course you do.

When I was born, in the hospital, all the other babies came out bald or with heads full of hair that laid down perfectly.

Some say babies don’t smile – but those are usually folks who have a hard time smiling themselves and don’t want to believe that another human, only hours into this world, would do something so much better than they do.

I was born smiling and I haven’t forgotten how to do it, regardless of what life has thrown me.

And life has thrown me things and they’ve been some hard hits, but you don’t hear me talking about them or focusing on them or wallowing in them like some folks do. You don’t even know most of them exist.

I’m not different because I want to be or try to be, I’m different because that is who I am. And this world has tried time and again, and it won’t stop trying in the days and years ahead, to make me be like it, but I can’t do that.

And when I make Tres Leches , three milk cake, I make Cuatro Leches, Four milk Cake instead. Because I can’t march to the beat of other drums because I can’t even hear those drums over the roar of my own orchestra.

And I know that if three milks are good, four will be even better, especially when that fourth one is caramel.

Gosh I have fun! 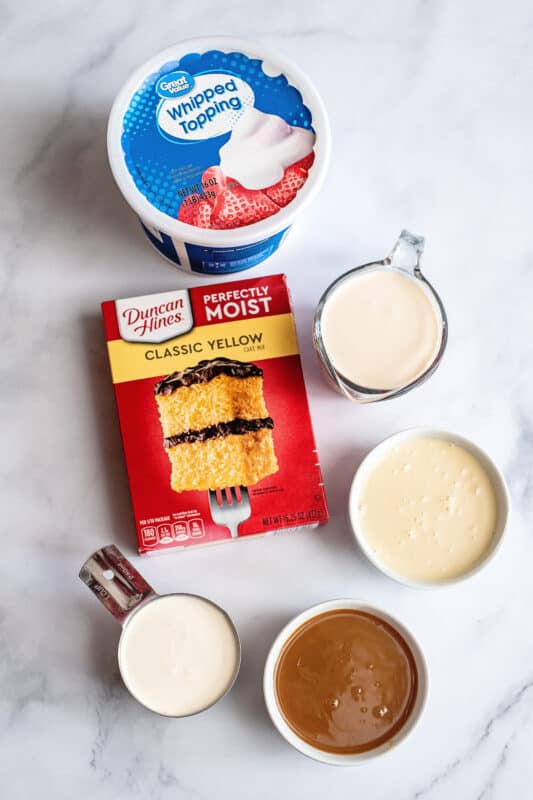 Complete recipe and instructions are on the bottom of this post…

I like Butter Golden but you can use yellow, white, or whatever you have. You could even use chocolate if you want. 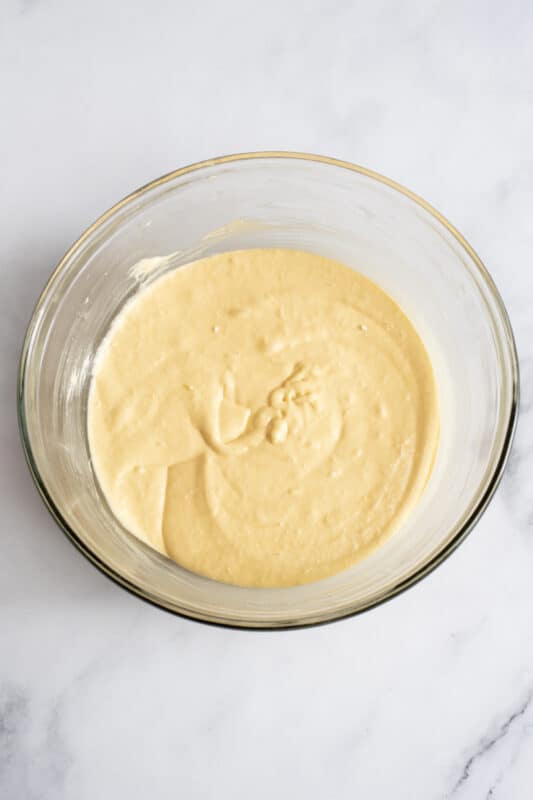 Prepare cake mix according to the package directions.

This butter golden mix is fluffier than regular cake mixes but I promise whatever you use will be just fine so trust me and don’t fret. If you’re going to fret over something there are greater causes than cake mix. 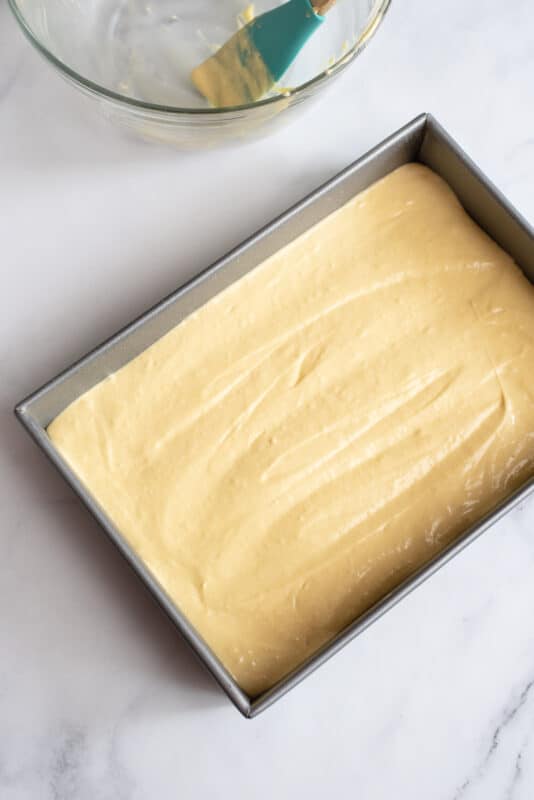 Spread cake mix into pan and bake according to directions on the box, making sure to get cake completely done before removing from oven.

We’re gonna put all sorts of good stuff on top of this cake so we don’t want it sinking in the middle. 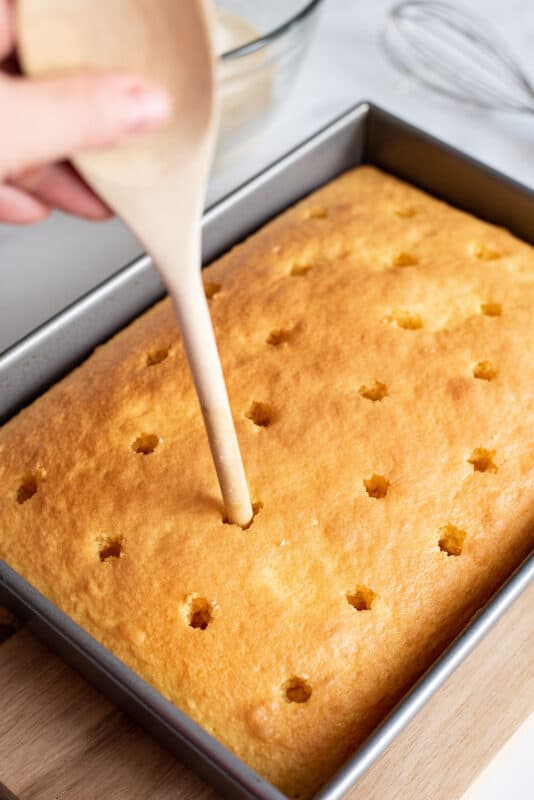 Now poke holes all in the top of the cake using either a fork or the end of a wooden spoon or whatever you grab out of the drawer first. 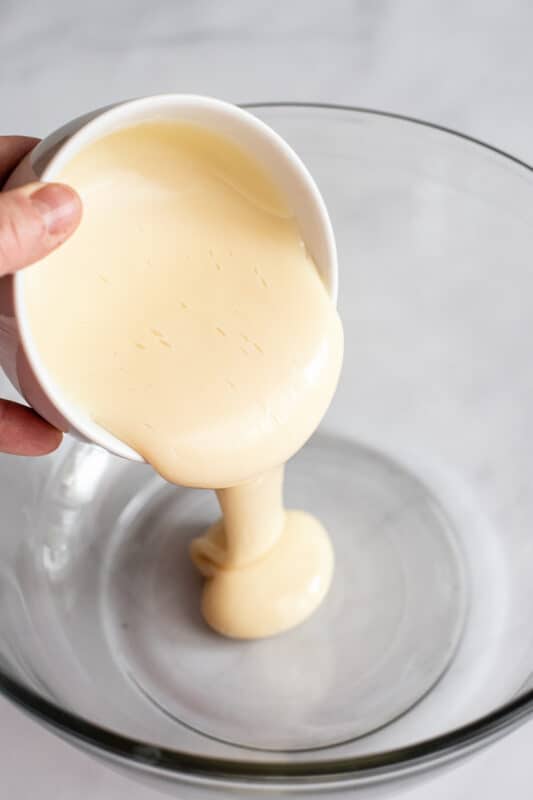 Pour your sweetened condensed milk into a bowl… 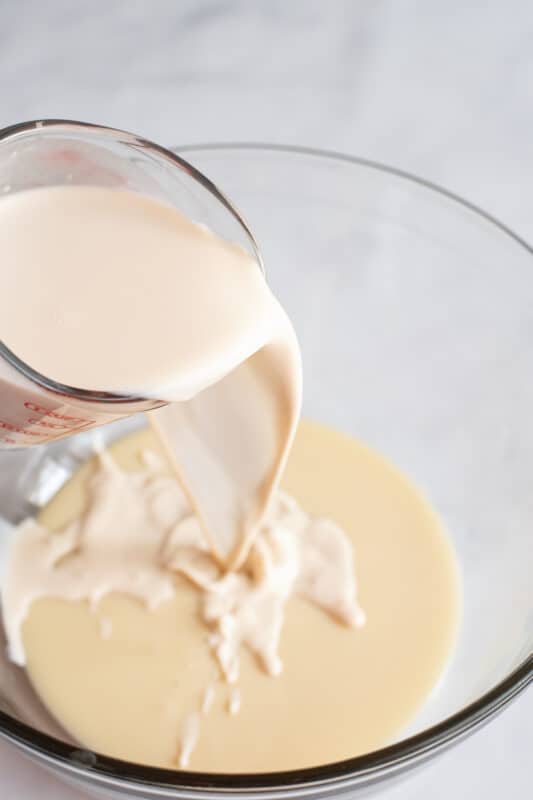 Add your other milks 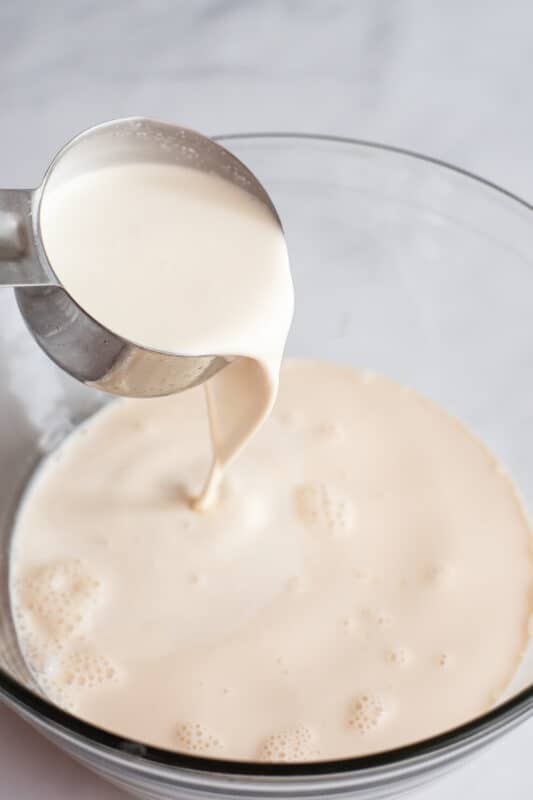 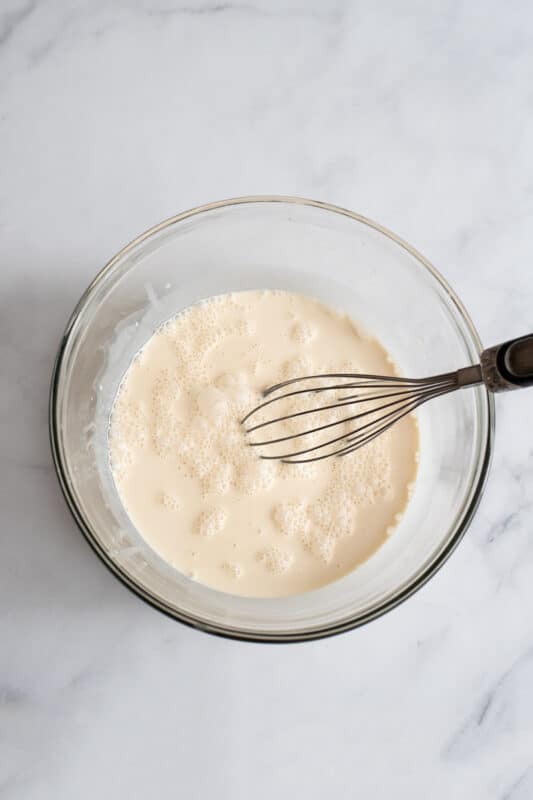 Stir all of that up really good until well blended. 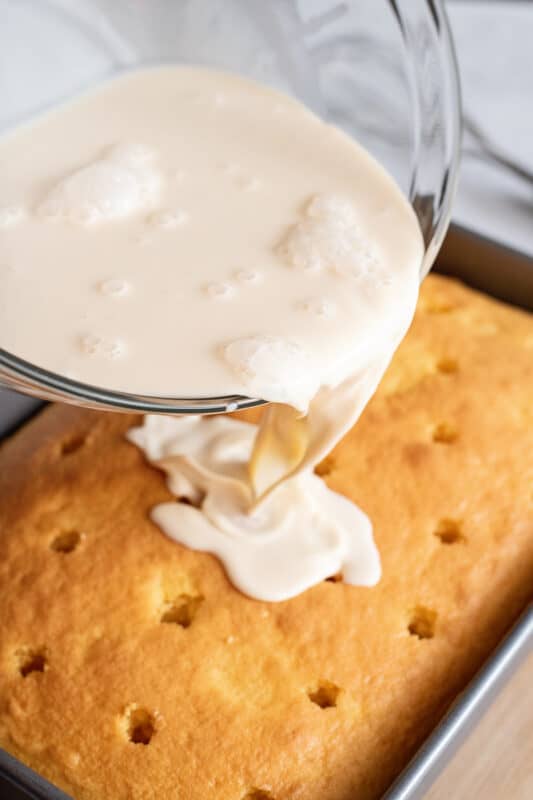 Pour it over the cake.

Give it a few minutes to soak in good. 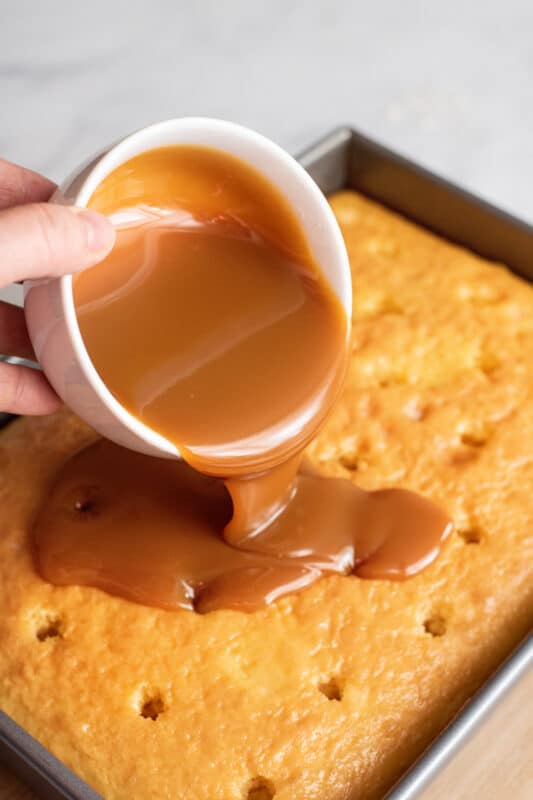 Let it cool a bit and then spread your caramel over the cake.

Don’t eat it yet.

I know, this seems like a cruel thing to say… 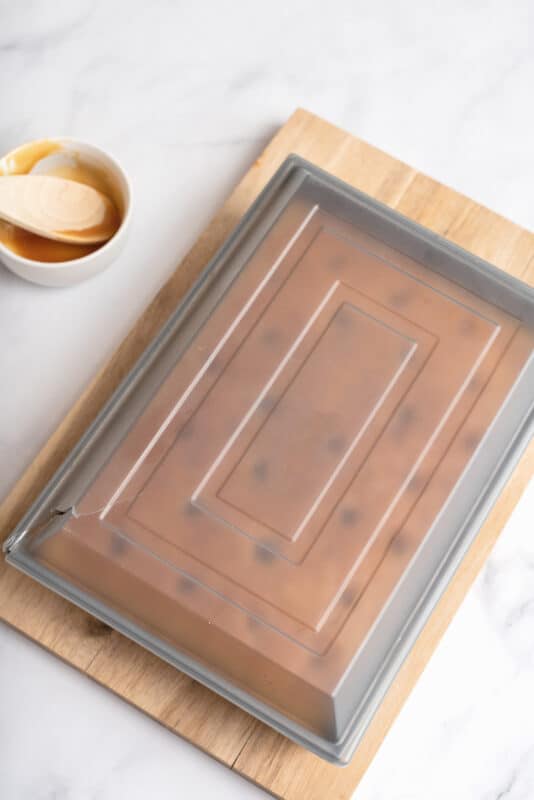 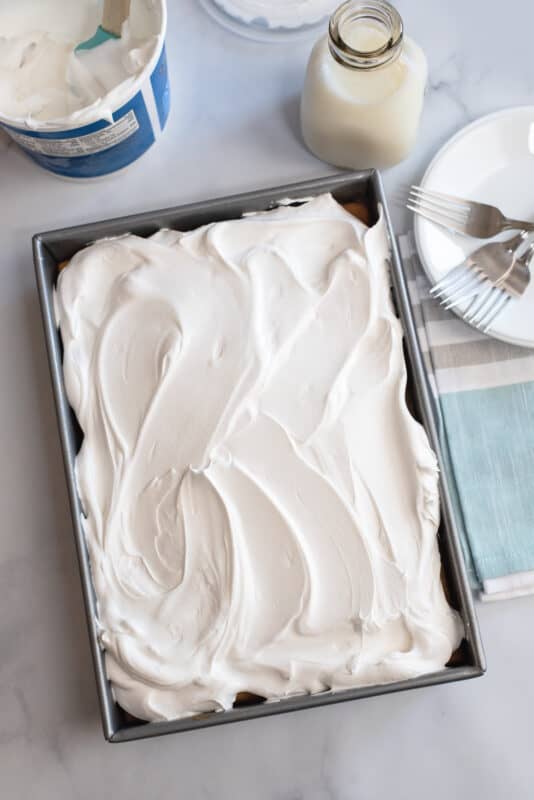 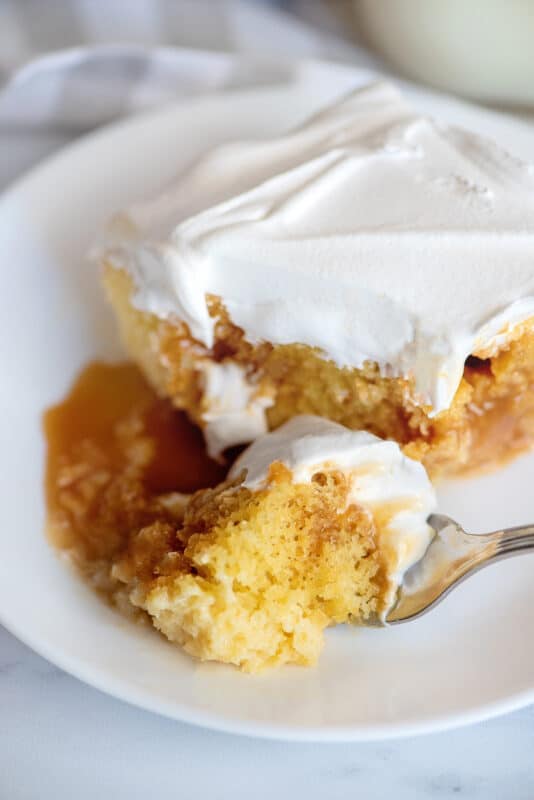 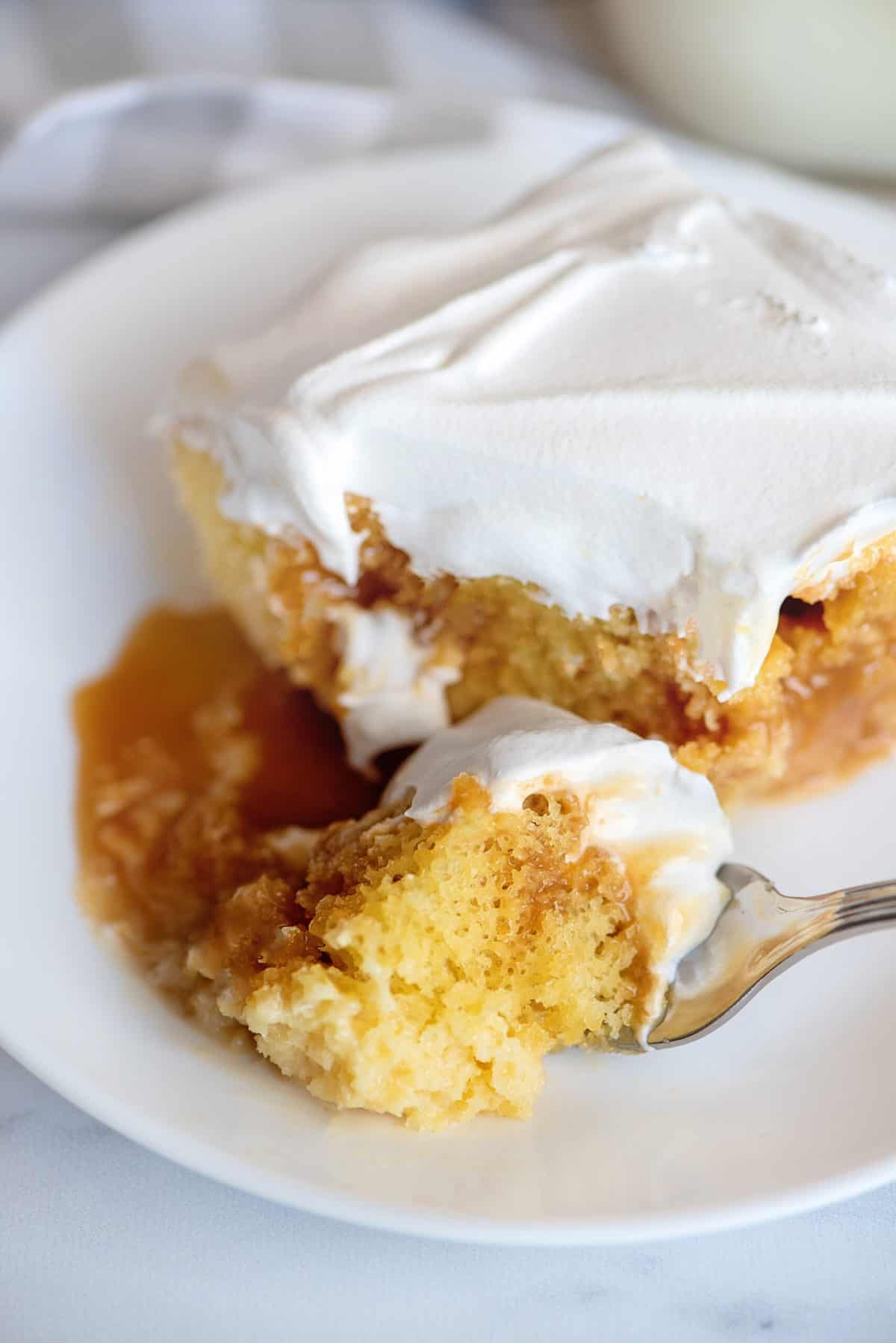 You may enjoy these other cake recipes:

“Everyone wants to live on top of the mountain, but all the happiness and growth occurs while you are climbing it”

Submitted by Marian, thanks Marian! Submit your favorite quotes by clicking here.