Y’all, as I write this the sky has finally decided to try out a shade of blue for a change and the sun is shining like it just found it’s calling! It’s 76 degrees and beautiful in Alabama so I am typing from my back porch – as is only fitting. I hope it’s pretty where you are at as well. 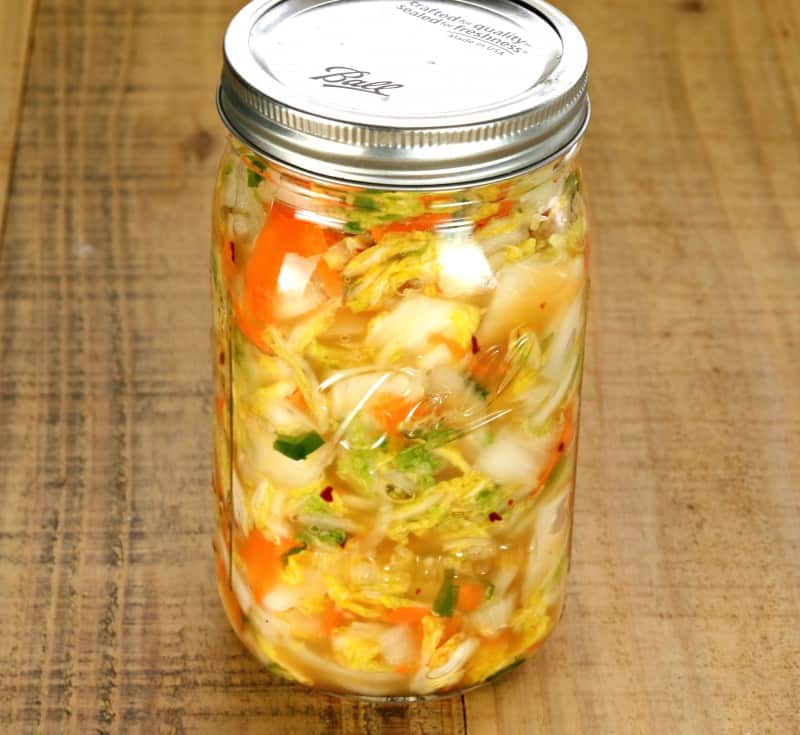 Kimchi is a traditional Korean side dish of fermented vegetables. It is similar to sauerkraut in preparation but with different ingredients – and usually spicy. Not only is it delicious but it is also very good for you!

The printable recipe is at the bottom of this post. Feel free to scroll ahead if you’d rather not chat or don’t want to read the tips and tricks for making successful kimchi.

Anyone who has been reading my ramblings for a while probably knows that I became a huge fan of Korean Dramas about four years ago (see here and here) and essentially gave up English speaking television for the wonderful world of South Korean programming. If that sounds strange to you, hang on because now that you’ve started thinking about it you’ll probably begin to notice more and more people around you talking about it. We are an ever growing group of folks and it’s so exciting to find others with the same interest. As of now, I’d venture to say that about 1 in 3 of my friends are what we refer to as “Kdrama addicts”. We aren’t really addicted, mind you, but that one to two hours a week is something we really look forward to – and perhaps a marathon on the weekends from time to time for a special treat.

Well, the thing is that you just cannot watch Korean television without wanting to eat Korean food. As I’ve mentioned in other posts, they just make it look SO GOOD when they eat – and just about every episode features the characters eating at some point – with zeal. Sooner or later, you’re going to find yourself wanting to try Kimchi. Dramas show families sitting happily on their living room floors making it, grocery stores sell it in glass jars, and Korean restaurants serve it. But making your own is about as easy as it gets and you have plenty of room for customization, so you know I had to show you how.

Now, you can use a fermenting pot (info at bottom of post), which I do nowadays if I am making a big batch, but it is absolutely possible to make great Kimchi using just a mason jar, which is how I am showing you today.

A note: Is this authentic Kimchi? Y’all, I am a ninth generation Alabamian who has never stepped foot inside South Korea. Of course this isn’t authentic Kimchi. However, it is authentic Christy- Jordan-who-has-lived-in-Alabama-all-her-life-and-really-likes-Kimchi-so-she-decided-to-make-it-and-show-you-her-recipe, Kimchi. As far as that goes, it’s the real deal.

What do you eat Kimchi with? Well, it’s technically a side dish but for those who aren’t familiar, here are some Southern food ideas: In place of slaw at a BBQ (side or atop sandwiches), as a little salad or appetizer, on the relish tray, on top of a hot dog, alongside any asian dish (of course), as part of a fish fry, or you can eat it like I do – with a fork, by itself, whenever the mood strikes me. 🙂 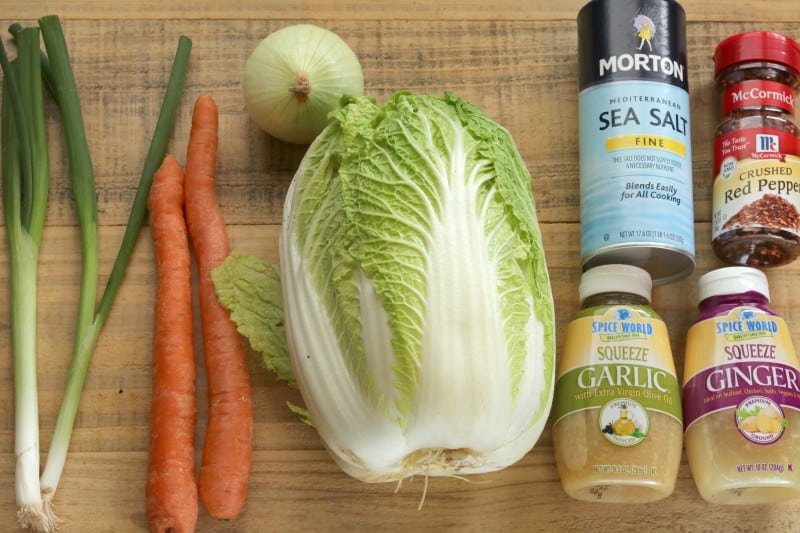 Today I’m showing you how to make a small batch, about a quart jar’s worth. There might be enough to make a quart and a pint jar so just have an extra jar handy in case. As I mentioned, Kimchi is something that is really easy to customize to your own taste but I’m giving you how I do it as a starting point. Y’all can then take the ball and run with it.

Traditional Kimchi has a red pepper powder and daikon radishes. Crushed red pepper flakes work just fine and I’ve only seen a daikon radish on the internet so I quickly decided that wasn’t a hill worth dying on for me. I’m sure you could find the exact ingredients if you went around to some different stores, looked online, or went to an Asian market, but I prefer to just use what I can easily acquire.

*Go easy on the red pepper unless you just really love spicy stuff because it is going to get progressively stronger as the Kimchi ripens and the spiciness will completely permeate the kimchi. 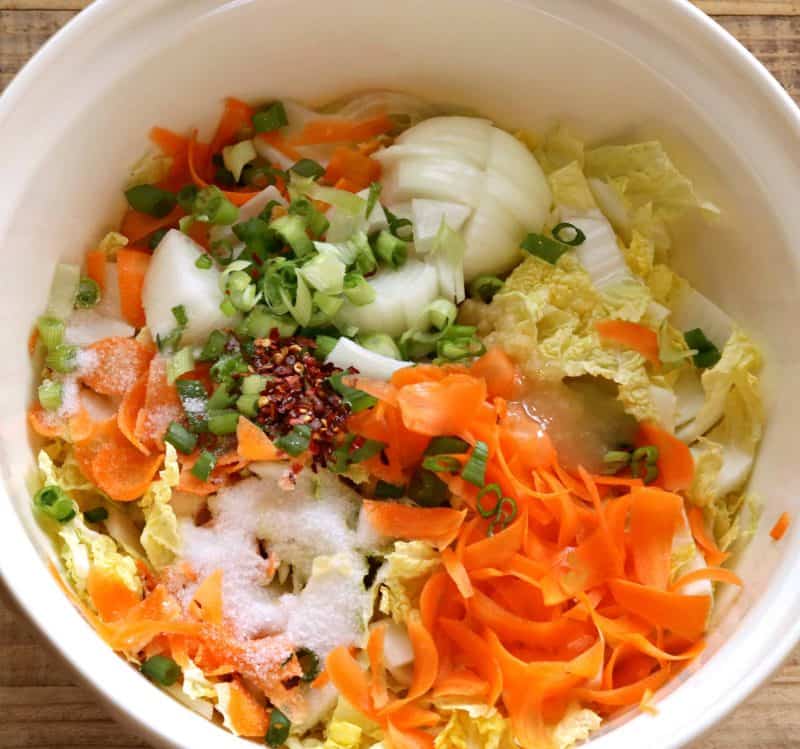 This is as simple as the sauerkraut I showed you a couple of weeks ago. Just finely dice, chop, or shred all of your veggies (your preference) and place them in a large bowl. Add all other ingredients. Then, using gloved or really clean hands, commence to squeezing and mixing it in the bowl for several minutes.

Not only does this mix it up well but it also helps draw the juices out. You want to have enough juice to cover your Kimchi once you jar it, although it may take a day or two for that much juice to develop. Our point here is to give it a head start. 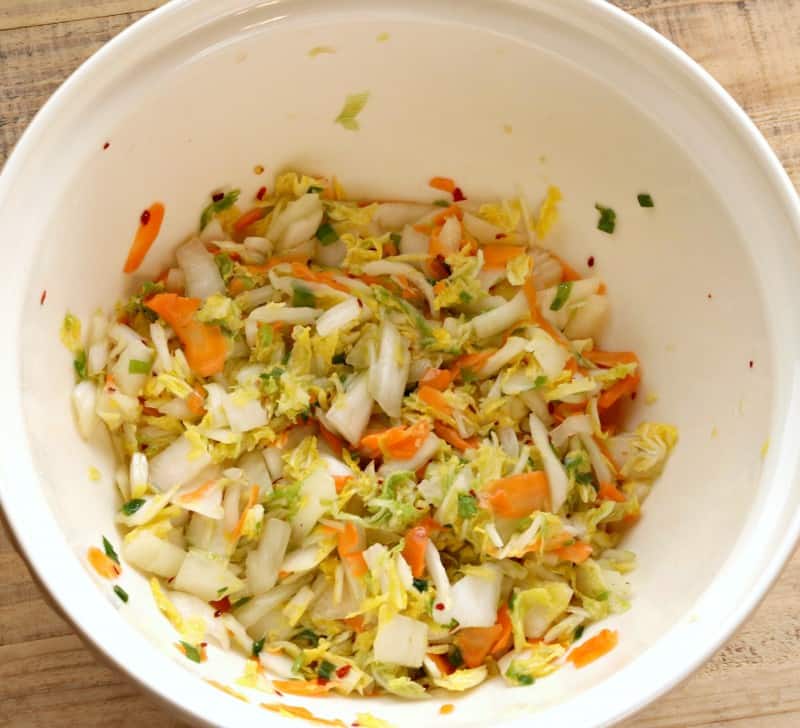 After a few minutes it will look like this, significantly decreased in volume.

At this point, we want to pack it into a quart jar.

When I say “pack” I’m not kidding. Really press it down in there. Once it is in, press it down some more. Then, put the lid on it. If you have some that won’t fit, put it in another jar. Let this sit out on your counter for about a week and twice a day open and shut the lid to release pressure as the kimchi ferments.

What if there isn’t enough liquid? There should be enough liquid to cover the kimchi by the next day. On the off chance that there isn’t, heat 2 cups of water to boiling, stir in 3/4 of a tablespoon of salt (remember, not iodized salt), and then allow to cool completely. You now have a brine and you can add as much of this as is needed to cover your kimchi (or whatever else you are fermenting, such as sauerkraut).

Just make sure you open and shut the lid twice a day for the week or so that it is out in order to release gases that build up. If you forget for a day or two, it’s best to put the jar down in a plastic grocery sack and then open it, as there will likely be some spewing from pressure build up, but your Kimchi is just fine. Close the jar once the pressure is released, give it a quick rinse, and carry on.

When is it ready? I find that Kimchi is ready much sooner than sauerkraut is. Mine is generally good to go in about a week. At that point I put it in jars and store it in my refrigerator, where it gets even better in another week or two (but I start eating it right away). You can tell if your Kimchi is ripe by the taste and smell. You won’t be able to taste individual ingredients anymore, but rather it will all have a new, combined, full bodied taste in every bite. If you’re using a fermenting pot, you’ll notice that the “burps” (little gas bubbles coming out through the water seal) become far more frequent and family members will complain about the smell 🙂 Kimchi is wonderful, but does not make the best air freshener.

Do I need special equipment to make this in a jar? What about fancy venting lids or pickling pipes or weights or a tiny little monkey who dances on top of the jar until it is done fermenting and then stops and sings the national anthem? You can certainly buy all sorts of accessories in order to make fermenting in glass jars more convenient, fermenting pipes, glass weights, special lids, etc, but a simple glass jar with a human to open and shut it twice a day to release pressure is all that is needed. If you are considering purchasing some of the aforementioned accessories, I would suggest you first look at putting that money towards a fermenting pot, which can really be a hands off process of true convenience. I’m about to show you how I make it in my fermenting pot and then link to two really great ones.

Here are the steps I take to make a fermenting jar full of Kimchi.

HOW TO MAKE KIMCHI IN A FERMENTING POT 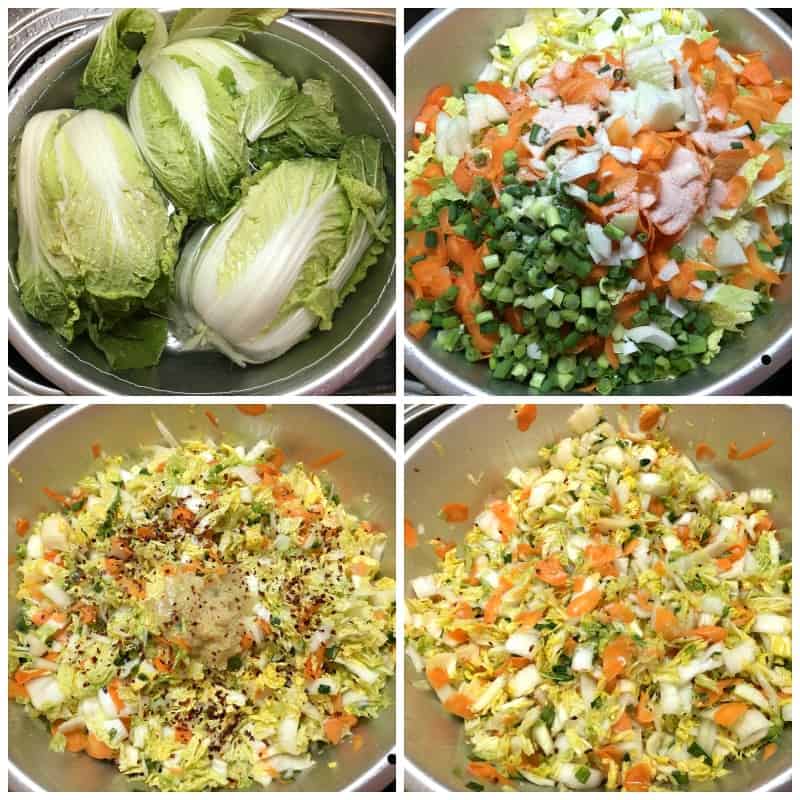 Then, I pack it all in my fermenting pot and add the weights. Place the lid on top. The tops of these fermenting jars have a little moat around them that you fill with water. This prevents mold from getting in your kimchi and also allows gases to escape as the kimchi ferments. I just check the water in the moat every few days and open it up when it’s ready to be jarred!

Interested in a Fermenting Pot like I have? Here are two really good ones: Humble House Sauerkrock and Harvest Fiesta Fermentation Crock.

In about a week, ENJOY YOUR DELICIOUS KIMCHI!

Here are some other Korean inspired recipes from friends around the web: 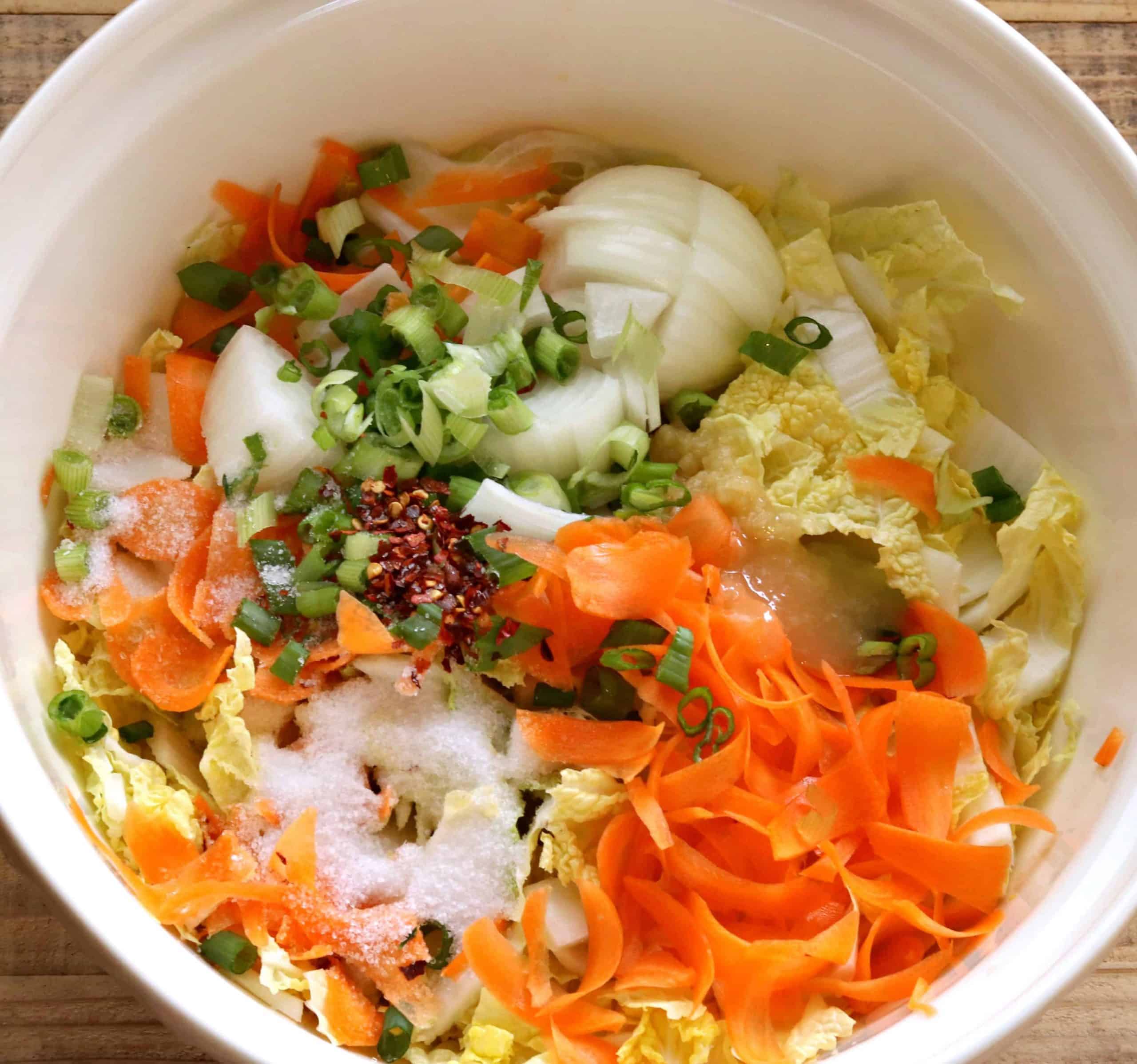 Note: My starting point for this recipe was found in Nourishing Traditions, a great cookbook with all sorts of wonderful information about eating the way our ancestors did. It’s a fascinating read and always a great resource. If you’d like to learn more about it or order a copy, click here.