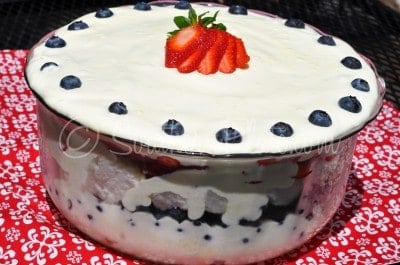 I have a sweet tooth big enough to take over my entire mouth but I can’t eat sugar, at least not in anything other than small quantities. So I adjust a lot of dessert recipes to make them lighter or sugar free altogether. This is one recipe that works really well and is every bit as decadent and refreshing whether you make a regular or lighter version. We serve it a lot at our family get togethers in the summer and my husband always chooses it as his top pic for his February birthday as well. It would be the perfect addition to your fourth of July or other summer celebration!

This is the finale to my week of no-oven and no-grill recipes for those of us who are already hot enough but still want a good meal on the Fourth. Be sure to check out my slow cooker pulled pork BBQ and Vinegar Slaw and thanks to the new web design, all of this week’s recipes have the button them to allow you to print just the recipe now!

Ready for this cool, refreshing, and light dessert? Here we go!

Okay, here is where you can really tweak this. I’m using sugar free vanilla pudding mix and light whipped topping. You can also use skim milk instead of whole. 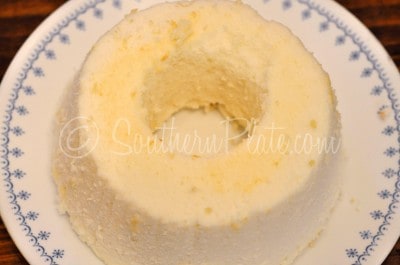 Slice all of the brown outer layer off of your angel food cake.

I was gonna call it “crust”  but that kind of implies that it is hard and crusty, which it isn’t of course! In fact, this brown part is the part you are supposed to eat while you make the rest of the cake because it’s so good and you really need to keep your energy up! No sense in wasting it anyhow.. 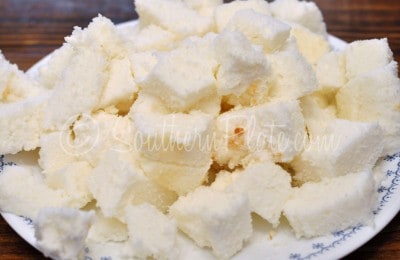 Cut the cake into cubes. You can just tear it also if you want to. 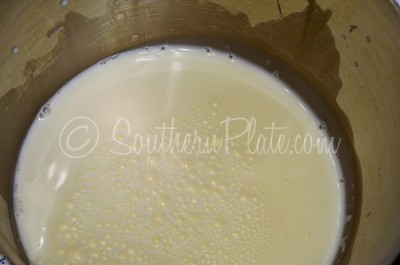 In a mixing bowl place your milk. 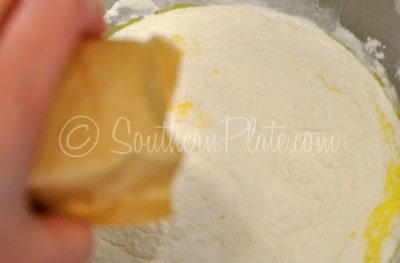 Add your pudding mix and mix until well blended 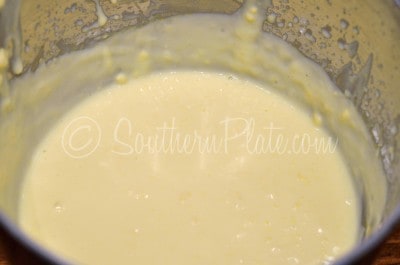 That looks pretty well blended to me. 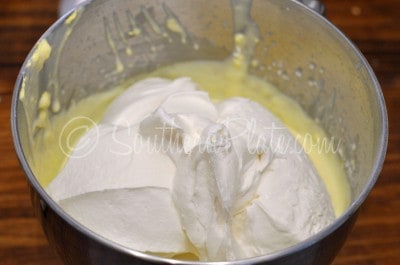 Dump in your whipped topping.

Of course the recipe says to “fold” it in but y’all know I’m a dumper, not a folder. 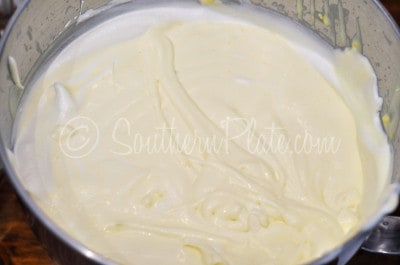 Mix that up until well blended and all prettified. 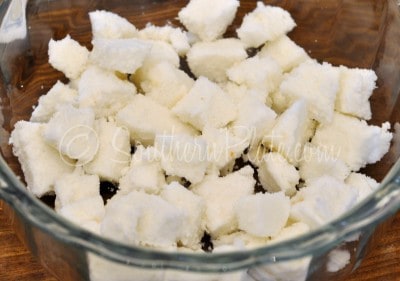 Place 1/2 of your cake pieces in the bottom of your bowl.

If you start thinking “WOW, Christy’s looks much bigger than mine!” that is because Christy eats way too much of this cake and it is also a favorite of Christy’s husband so Christy is making a double recipe. Don’t worry though, I showed you the ingredients for a single recipe and a single recipe would normally feed ~thinks~ oh, say eight people or so. The way we eat it, though, we really need a double recipe. We all have fits over this dessert and since I make it with sugar free pudding and light whipped topping, you can eat at least twice as much with only half the guilt! 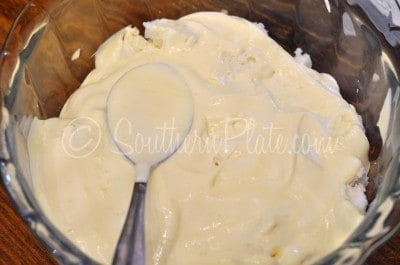 Spread 1/3 of your pudding mixture over the top 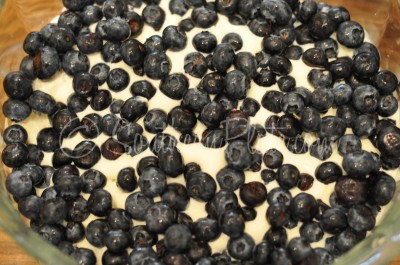 and put every blessed blueberry you got on top of that!

I got a great deal on blueberries and strawberries at Sam’s club this week. 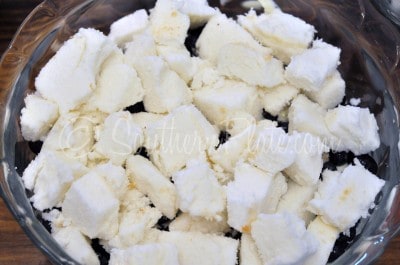 Top with the remainder of your cake pieces 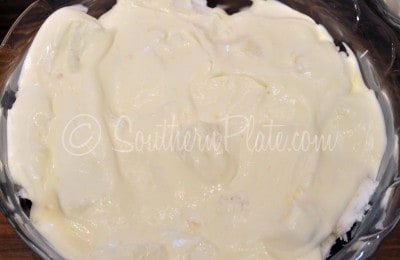 and 1/3 more of your pudding mixture 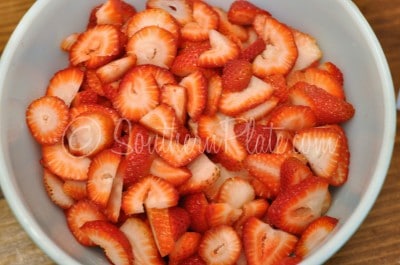 Wash your strawberries and slice them

Now you’re going to take those strawberries and put them on top of your angel food cake pieces, just like we did the blueberries.

I really want to show you a picture of me doing that but I don’t have a picture because – well sometimes these things just happen. 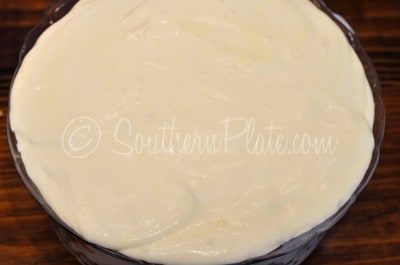 and cover with remaining pudding mixture

If you want, you can decorate the top with more berries. Cover and refrigerate for several hours or until ready to serve. This is great if made the night before, too! 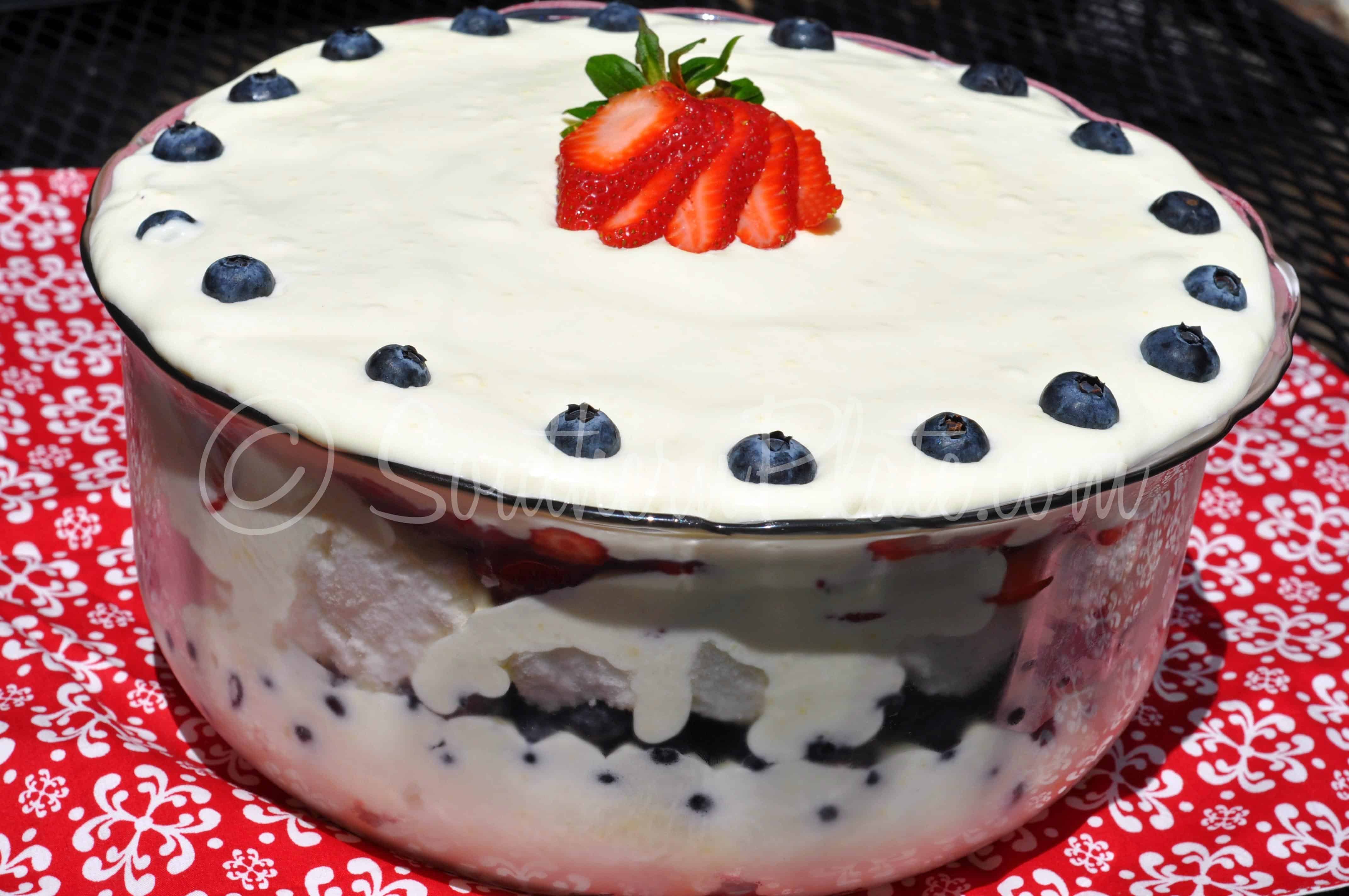 About The Southern Plate CookBook

I’ve had a lot of folks ask me when the book will be available or where they can get it so I thought I’d let you know that it is available for pre-order right now! The book debuts October 5th at all major booksellers but if you pre-order it you’ll be sure to have it as soon as it comes out with no waiting. I’ll be going on a book tour around that time as well and would love to meet you and sign your book if I come near your town (dates and locations will be announced at a later date).

In this book, I tried to create a “go to ” book for all of the classic Southern recipes we grew up with. It’s a compilation of the must have Southern recipes along with the stories behind them with more stories of the old days and tales of where our true wealth lies. I really put my heart into this book and I want to thank you all again for giving me the opportunity to bring the stories of the good people we come from alive again.

Read about Southern Plate: Classic Comfort Food That Makes Everyone Feel Like Family on Amazon.com

Read my interview about the book and Southern Plate on Booksamillion.com

Be sure and check it out at these retailers as well, who are also taking pre-orders!

“The person who seeks all their applause from outside has their happiness in anothers keeping .”