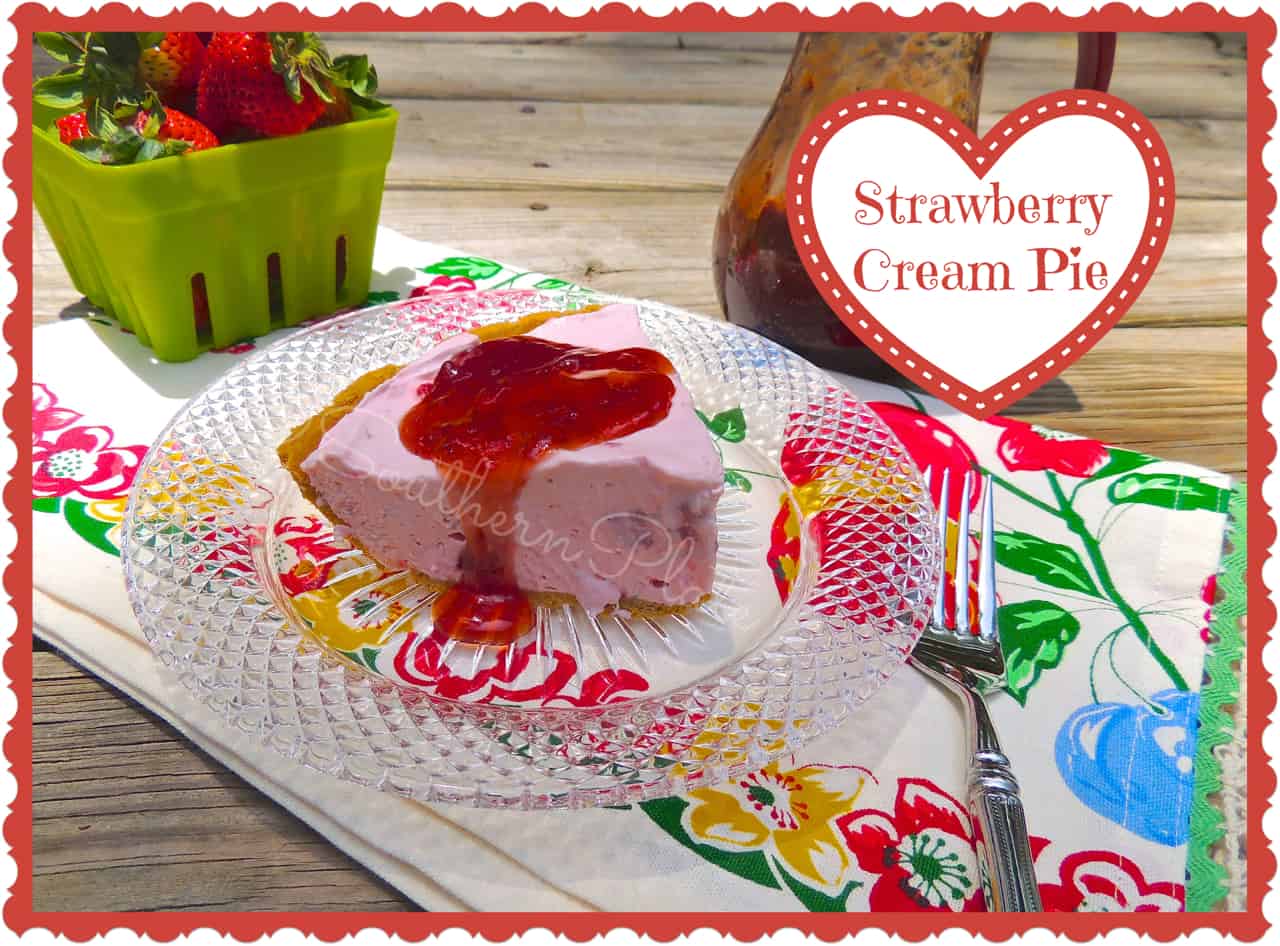 This recipe for Strawberry Cream Pie is for my husband, who used to think he hated cheesecake – because he had never tried it – and has always loved strawberries. This is a wonderful blend of them both, whipped up into a creamy, fruity, delicious summer concoction and served up in a graham cracker shell! To make it even more fun, you can substitute Splenda for the sugar if you like and make this practically sugar free save for the scant amount in the pie crust.

It sure nuff is good!

But enough about the recipe, because I’ma fixin’ to give that to you anyhow.

Earlier this week, I ran out of tea bags. This almost never happens to me because I buy them in bulk. I spent the better part of thirty minutes determined to find them before finally admitting defeat and getting back to work – without my gigantuan Tervis tumbler of iced tea beside my chair.

I’ve had a pretty busy week so I didn’t have time to hit up the grocery store that evening, or the next day. Two days without tea. You don’t realize how much you enjoy it until you don’t have it anymore.

I finally found time to run to Dollar General and grab a few boxes of Luzianne so I’m singing a happy tune once more. I can handle two days. I’ma gonna tell you what was hard though, going two weeks without it last summer when I was in Los Angeles.

Now y’all don’t go telling me they have iced tea in Los Angeles, I know they have versions of it and just about anything else but I was filming a tv show and had to be on the set by 6 each morning. Most nights I was doing good to be back at my hotel by 11:00 pm, so there was hardly time to seek out iced tea.

By the second week though, I got determined. Late one night on my way back to the hotel, I stopped in at a grocery store. I picked up two gallon jugs of water (to use as tea pitchers), some tea bags (they came in the tiniest boxes!), sugar, and Splenda. I wanted Splenda tea but figured I’d make sugar tea for anyone on set who might prefer that. I was excited and called the production assistant who was assigned to me to enlist him as an accomplice. I asked what time he was going to be on set and he replied “I get there whatever time you get there.”

Justin, my P.A. Look closely, because this guy is going to be one of the biggest deals in tv someday. Seriously.

So I got on set and I had this brilliant plan. I was a judge and we were filming a cooking show so there were two kitchens on our set, a commercial kitchen and a home kitchen. I’m familiar with both so I figured I’d just sneak in there, hop on set, use one of the ktichens to make tea, and still have plenty of time to wash and put the pot away and hide all of the evidence before the bigwigs showed up.

I figured technically I wasn’t supposed to be using the kitchen but goodness knows I know how to boil water so what they didn’t know wouldn’t hurt them.

For once, I was using my brother’s advice: “It’s easier to ask forgiveness than it is permission.”

So I went to the home cook kitchen first and put a pot of water on to boil.

Nothing happened. The oven didn’t even break a sweat. No prob, I’ll just go use the chef’s professional kitchen.

So I took my pot of water and walked over to the other kitchen on set and turned on one of the burners. Nada.

~Exhale~ I called my P.A. and asked if he was on the lot yet. He was walking in at that moment and I explained what I was doing. I hadn’t told him a lot ahead of time because I didn’t want the poor guy to have information that could get him in trouble. When he saw what was up he informed me that on a set, they can’t have power going to the kitchens unless a fire marshall is present.

Now, I was not to be deterred. I’d spent an unseemly amount for a bag of sugar and all this mess to make me some tea and by golly I was gonna to have me some tea. I began checking all appliances and outlets and found…the microwave worked!

I began looking for a microwave safe something or other to boil some tea bags in (no time for steeping folks, people are starting to get on set and I gotta get to makeup) and of course, at this point you know it’s not gonna be an easy task either way we go. All I found was a few coffee cups. Alrighty then, you wanna rumble? We’ll rumble. Of course any Southern woman with half an inch of determination in her spine can make a gallon of tea in a coffee cup

I tossed in my tea bags, filled it most of the way, allowing for boiling room, and powered that puppy up. A few minutes later, I was funneling that stuff into my pitcher of sugared water using a laminated sign I’d found hanging in my dressing room (for the clean freaks, yes, I washed it first – then poured boiling tea down it so we’re good). I repeated this until my tea was strong enough (I like a deep amber, tea isn’t supposed to be khaki) and within ten minutes I had two gallons of tea as me and my PA rushed to clean up the mess. Bless his heart, he was kinda responsible for knowing where I was on set at all times in case they needed me for filming so you know I’m gonna draft him into any mischief I come up with.

He helped me carry the evidence and my two gallons of tea into my dressing room and no one was the wiser. I was grinning like a cheshire cat and happy as a lark. 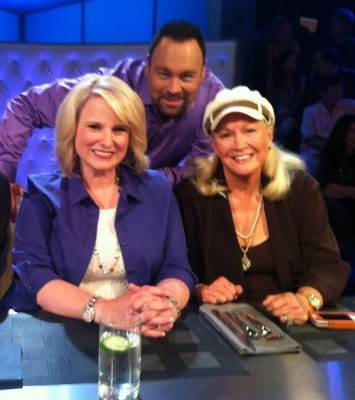 Later that morning, I sat beside the original cool breeze of the South, Miss Diane Ladd, in makeup. As we talked, our accents got so deep you’d think honey was dripping off our words and we had a good laugh when I asked the makeup gals how they spelled Mississippi (where Diane is from) and they proceeded to spell it normally, but me and Dianne interrupted them with our voices sing songing in unison

We had the best time. I just love that woman. And as we sat on set towards lunchtime, still working, Diane mentioned needing something to drink. I leaned over and said “I got two gallons of tea in my dressing room, you want some?” Her eyes lit up “Oh Christy that would be wonderful!” I grinned and said “Sugar or Splenda?” and as she placed her order I pulled my phone out from where it was hiding beneath me on my chair and texted my PA “Dianne wants some tea, can you put it over ice and bring it to her please?”

Minutes later she said that was some of the best tea she ever had.

And to think, I didn’t even need a fire marshall present when I made it.

What does this have to do with strawberry cream pie? Not a blessed thing, but I wanted to talk about it today. 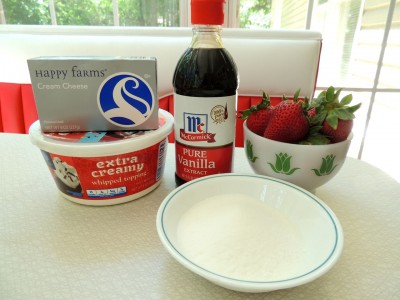 *You can get any whipped topping you want, light is fine.

*You can also substitute Splenda for the sugar if you like. If you have another artificial sweetener that cranks your tractor, go for it.

*You can ALSO use el cheapo vanilla, too. I usually do. I have no idea how this bottle of the real stuff got into my house but I’m pretty sure it wasn’t purchased out of my wallet! 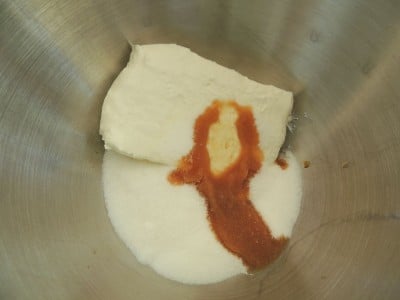 Place your softened cream cheese, sugar, and vanilla in a mixing bowl. 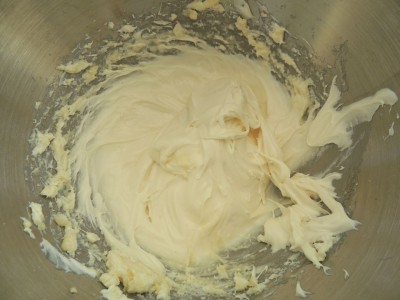 Beat until light and fluffy, or until you get tired of messing with it, whichever comes first. 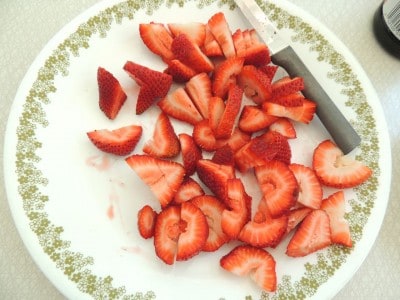 Wash your strawberries and cut the tops off. Chop them up a bit. 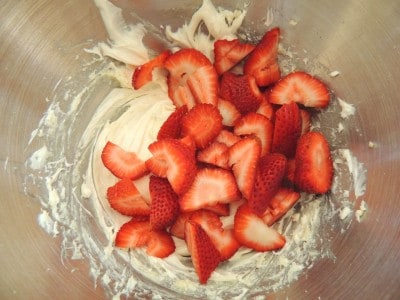 Throw ’em in your mixing bowl. 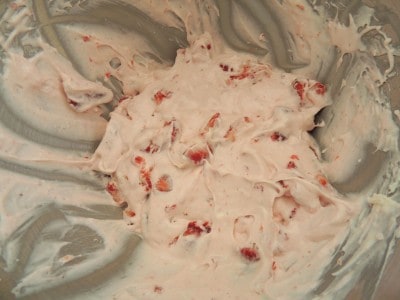 Beat that like it just called your Mama ugly. 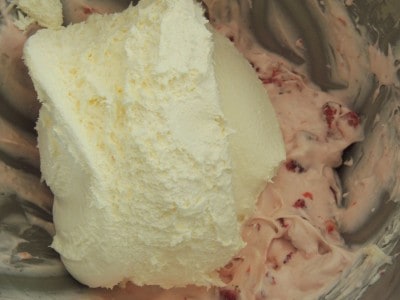 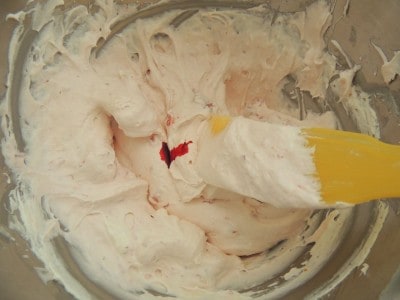 NOW, if you want your pie to be a little bit pinker, add a few drops of red food coloring like I’m doing here. 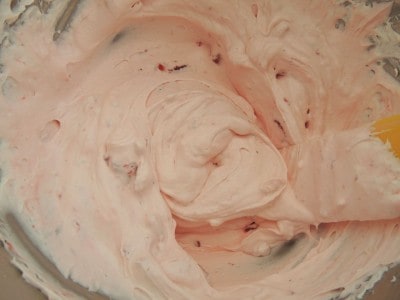 Note: If you find food coloring highly offensive and feel certain it is responsible for the decline of mankind, feel free to avoid this step. 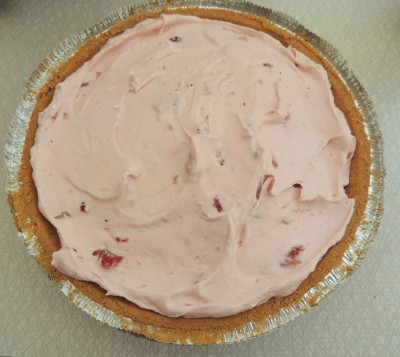 Spoon that into your graham crust and cover.

Refrigerate for several hours if you are going to eat it within the next day or two.

If not, cover it well and freeze it. It will keep for up to a month in the freezer if sealed really well. 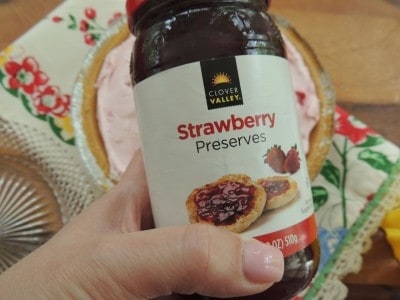 When you get ready to serve your Strawberry Cream Pie and want a lovely strawberry sauce like I have,

just take some strawberry preserves and put them in a microwave safe cup.

Heat about 45 seconds and give a good stir, then allow to cool slightly and spoon over the top 🙂

I love this pie but in my opinion, the strawberry preserves topping just MAKES it! 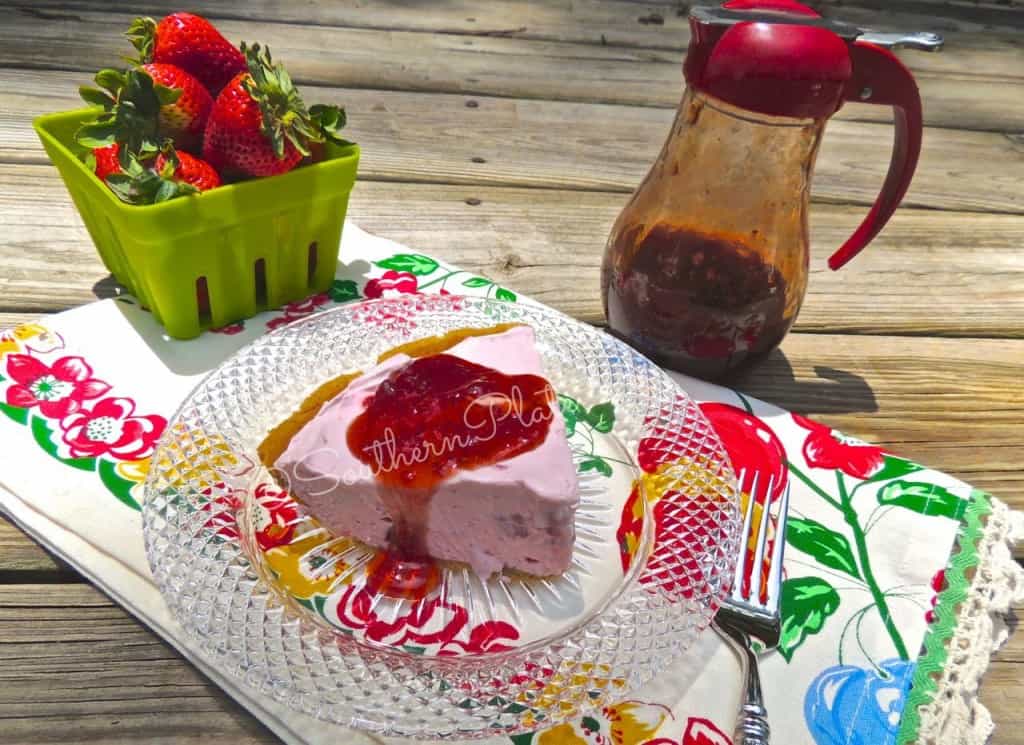 Store this pie in the refrigerator for up to two days, or freeze (wrapped really well) for up to a month. 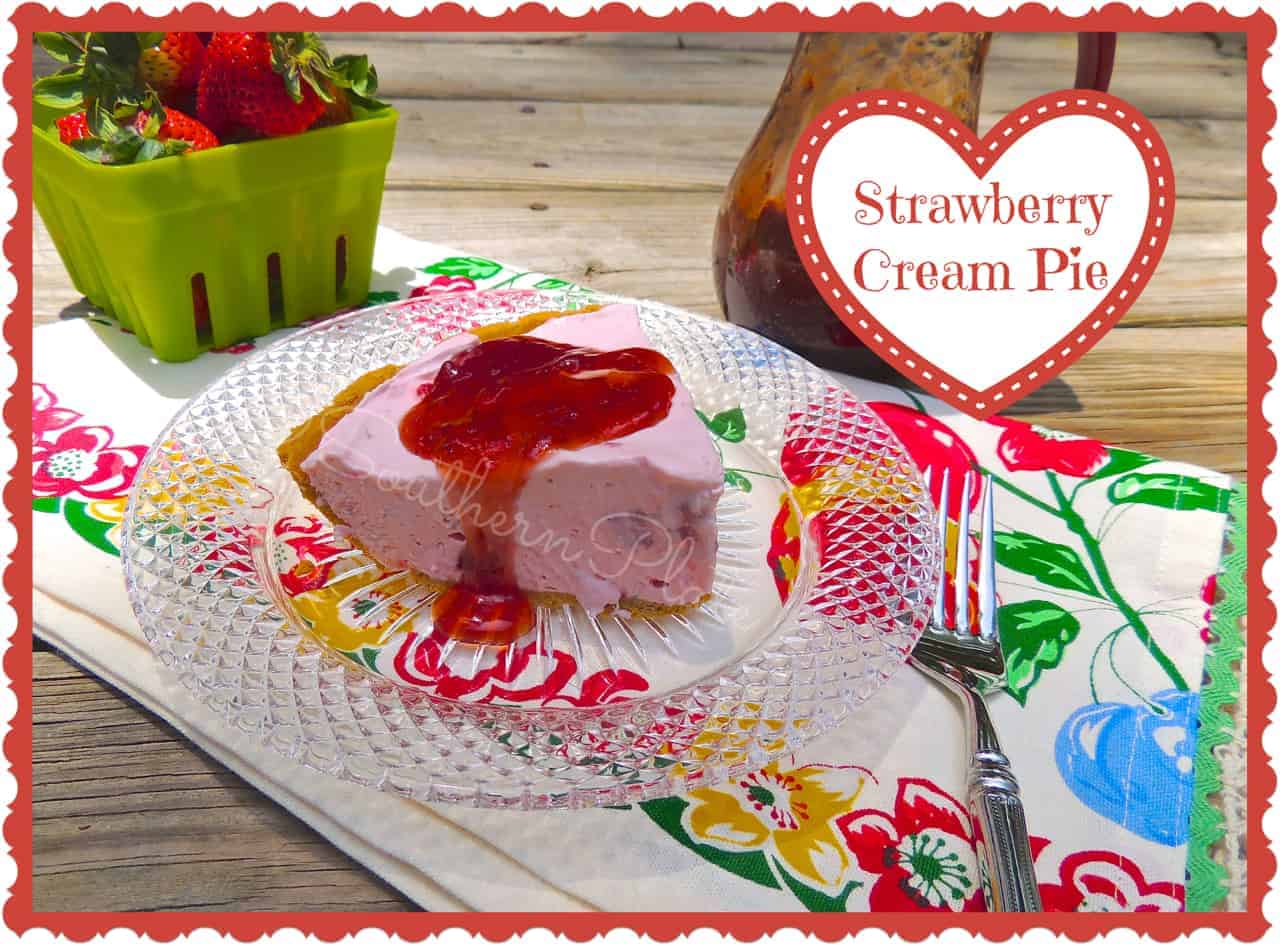 “Our greatest glory consists not in never falling,

but in rising every time we fall.”

~Confucius. Submitted by Dianne, thanks Dianne!

Click here to read more or to add your encouraging quote to our collection!