Y’all, I’m not kidding with the title up there. If you love German potato salad as much as I do, the first bite of this will bring tears of joy to your eyes. With crispy bacon and potatoes tossed in a scrumptious bacon and onion gravy (or dressing), this really is the BEST German potato salad! 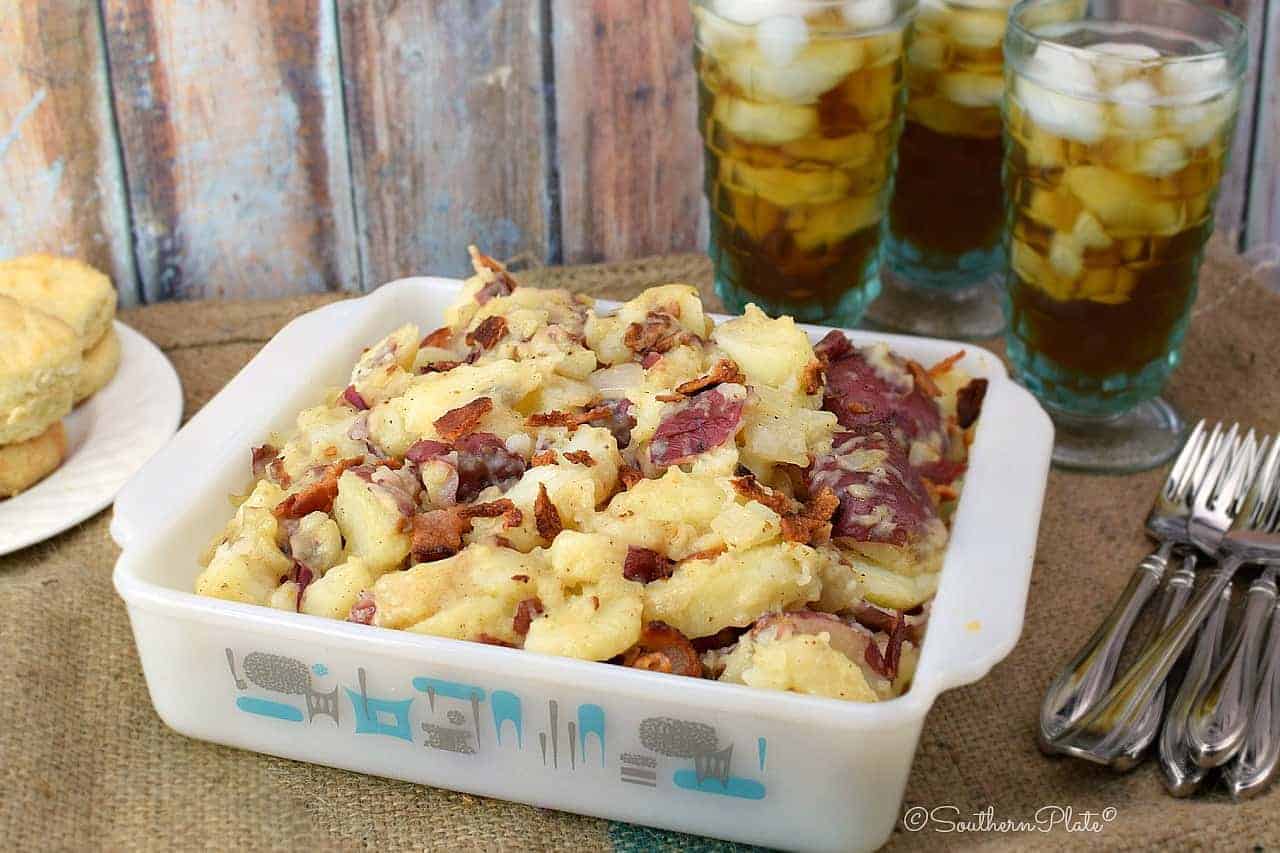 So, I first found this recipe in one of my Grandmama’s old cookbooks that I inherited and tweaked it a little bit to come up with this heavenly warm German potato salad. The secret is all in the dressing. You see, it’s absolutely infused with flavor because the base is bacon. Did you know that bacon drippings are the most flavorful grease there is? Seriously. Well, you take those bacon drippings and then you sauté some onions in it, then you add a little bit of this and that, flour to thicken it, some vinegar to splash it up a bit, and you basically end up with bacon gravy, but we’re calling it dressing in this post.

Before we dive in, I want to share another tip so you make the best German potato salad recipe EVER. Pay attention to the timing of when to pour the bacon gravy over the potatoes. See, when your potatoes are warm, they are absorbent. If you wait until they cool to pour your dressing over, they have formed a starchy film over them and they won’t soak it up, so it will just coat the outside. If you pour it while they are still warm, though, they’ll actually absorb part of the dressing and become infused with the flavor.

With crispy crumbled bacon and tender potatoes tossed in a delectably tangy bacon onion gravy, I just know y’all are going to love this potato salad as much as me. It’s a great side dish to bring to your next barbecue or potluck, but I’ve also included lots of serving suggestions below. Now, have a hanky handy, cos it’s time to make the best German potato salad you’ve ever tasted 😉. 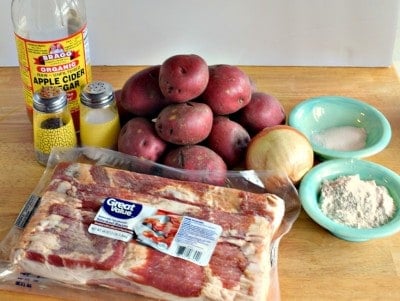 How to Make The Best German Potato Salad 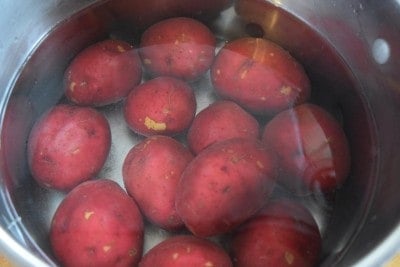 Boil yer taters with their coats still on :).

Just wash your potatoes and then put them all in a pot, covered with water, and bring them to a boil over medium-high heat. You’re going to want to boil these until they are fork tender. I boil mine for about 20 minutes or so. 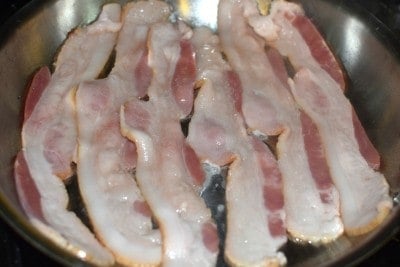 Fry you up some bacon.

That is one of my favorite instructions to read or write in a recipe. Most folks have a specific brand or type of bacon that they prefer. We really enjoy uncured turkey bacon.

After you get this bacon cooked, remove it to a paper towel-lined plate but don’t do anything with all of that lovely bacon fat in your skillet. If you don’t have a lot of grease due to using turkey bacon, add a tablespoon or so of vegetable oil. 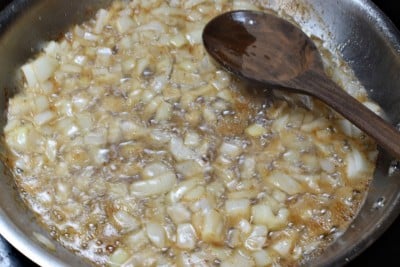 After you remove your bacon, add your chopped onion to that skillet and cook it over medium heat, stirring often, until your little onion bits are all translucent and golden like this.

Take this off the stove eye (or burner for y’all up north) and set it aside for a minute.

Drain your potatoes and then pour them into a large bowl to let them cool for just a few minutes so they can be handled without feeling like you’re holding hot coals. 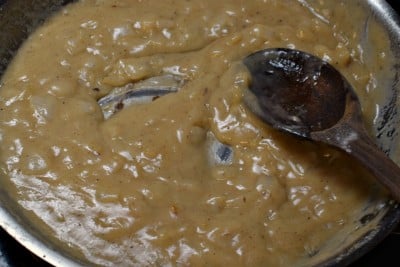 Don’t blink because I’m about to explain how to get from that last picture to this one:

Once your onions are lightly brown, remove the skillet from the heat.

Stir in the water, vinegar, sugar, flour, and salt and pepper to taste (I start with 1 tsp of salt and 1 tsp of pepper).

Return to heat and bring just to a boil (over medium heat) while stirring constantly.

Once it comes to a boil, boil for one minute, while still stirring.

“Gee, Christy, you just ain’t letting up on this stirring thing.” I know. Now hush and do it, I’m hungry.

And BOOM! You have what is pictured above.

Now I want you to act fast!

Remove the dressing from the stove eye or burner. Carefully slice your potatoes and place them in a bowl.

They will break up a little bit and that is okay. Just do the best you can to carefully slice them and make an attempt at keeping them intact and their skin on. 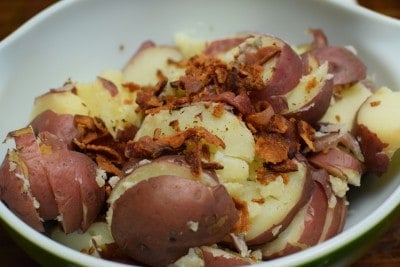 Crumble all your bacon and place it on top of the cooked potatoes. 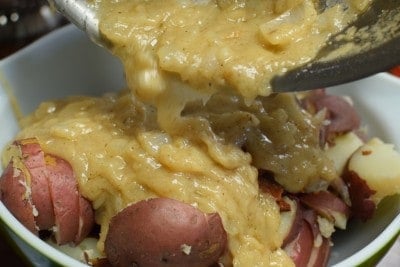 Now, pour all of that warm thick dressing over them. 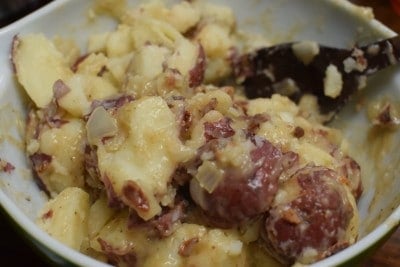 Stir carefully and well to coat all of your slices. This is the key and doing it while the potatoes are warm makes a world of difference in the flavor of your potato salad.

Store leftovers in an airtight container in the fridge for up to 5 days. To reheat, either bring to room temperature or gently warm in the microwave. Otherwise, you can totally serve it cold as well.

What do you serve with German potato salad?

You may enjoy these other delicious potato recipes:

“A coincidence is God choosing to remain anonymous.”

~Unknown. Submitted by Linda A. Click here to submit your favorite quotes!

Interesting, My recipes uses eggs as the thickener.

Does that mean you use no flour making t gluten free and less carbs? I need to know how you do that.

You’re a riot. Love your humor.

You have good taste Denise!!