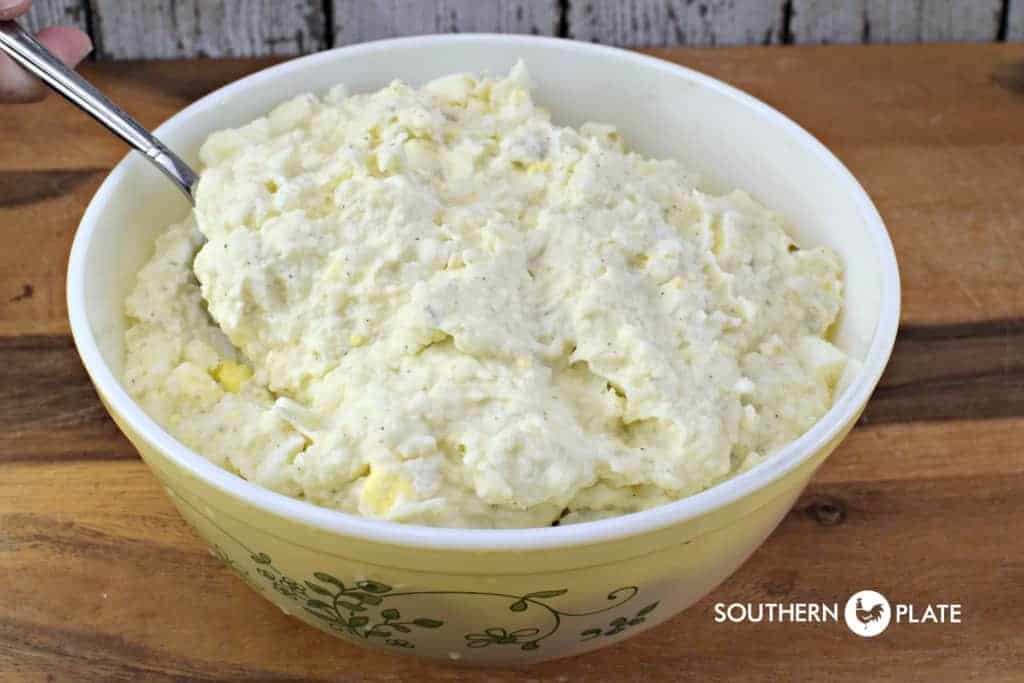 So much of our beloved foods and recipes are loved for the memories attached to them, just as much as the taste. Thomas’ BBQ recipe for Mashed Potato Salad is the best potato salad I have ever tasted (in my life) but there is a reason beyond that which makes it even more special.

Thomas Pit BBQ was an icon in Madison County. I don’t know when it was opened or how long it was in business but I can definitely say more than my lifetime. People would line up and sit in their cars for 45+ minutes to get their juicy smoked chicken, pulled pork bbq, white sauce, and this mashed potato salad (among other things). Everything on their menu was amazing. What was even more amazing is that if you ordered a plate in that window in 1980 and then in 2014, you likely had the same people preparing that food and handing that plate to you. We knew them. They were friends and family and we expected to see them when we went to Thomas’s.

But some time ago, Thomas’s was bought out by a local chain bbq place. The employees were given less than a days notice and we all watched in horror as the building was torn down and cleared to make way for a new building.

Recreating History With A Few Recipes

There isn’t a lot anyone can do now so I set about trying to recreate the two recipes that I went there for. I came awfully close with my Dutch Oven Smokehouse Chicken and of course we all have the classic Alabama White BBQ Sauce recipe. Several years ago I figured out how to best duplicate slow smoked pulled pork by using my slow cooker. Today, though, I’m bringing you the Mashed Potato Salad recipe that had emails pouring in to me after Thomas’s closed. Folks who know how I love the place immediately started emailing me “I wish you would come up with Thomas’s potato salad recipe!”

So here it is, my best rendition of Thomas BBQ Mashed Potato Salad: 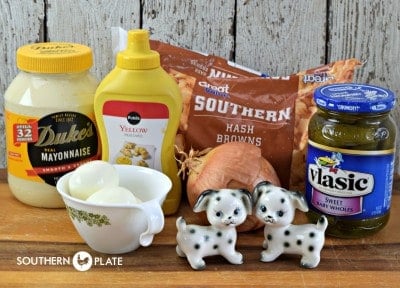 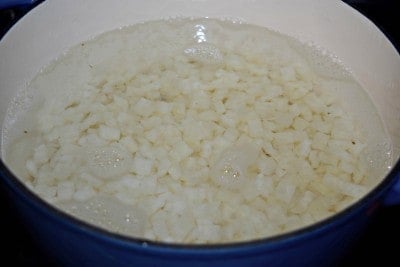 Place your potatoes (hash browns) in a large pot and add enough water to cover. Bring this to a boil over medium high heat. Once boiling, allow to cook for about ten minutes, or until tender. Drain. 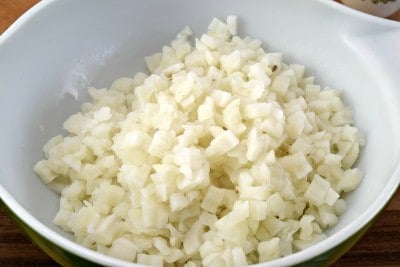 Place potatoes in a large bowl. 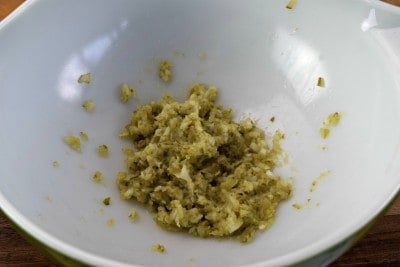 Now here is the thing and I don’t have a lot of pictures to represent it so just really pay attention here because this is important. You need to dice, by hand, 1/2 cup of sweet pickles and 1/2 cup of onion. Once they are diced you want 1/2 a cup.

Now, take that half a cup of each (I just put them all together) and run it through a blender, chopper, little smoothie mixer, or something like that because we want it really, really fine. We don’t want it to be a puree but we want it minced like this. This will help that flavor spread throughout every bite of potato salad and is really one of the keys to why this is so good. 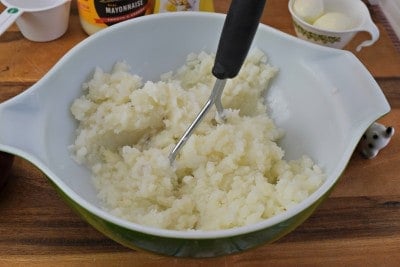 Use a hand potato masher or a long tined fork and mash up the potatoes a little bit. You still want them to be lumpy but just a good bit of mashed in there with the lumps. 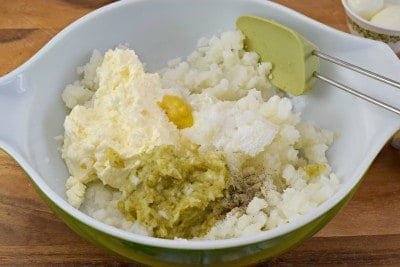 Add all other ingredients except for the eggs. So you’re adding in your mayo, mustard, minced pickles and onions, salt, pepper, and pickle juice. The pickle juice just comes straight from the jar of sweet pickles. That’s why I didn’t want you to get sweet pickle relish because there isn’t enough juice in there.

Stir that up really good. 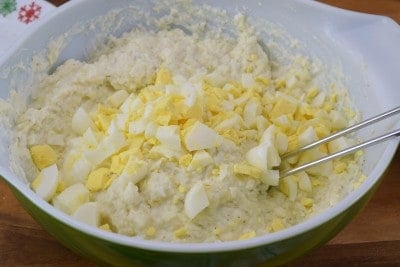 Then chop your eggs and add them in.

Now I don’t believe Thomas’ Potato Salad had eggs in it but I just love boiled eggs in potato salad. If you love them, be sure and add them in. If you don’t, feel free to leave them out. For me, they just make it extra special. 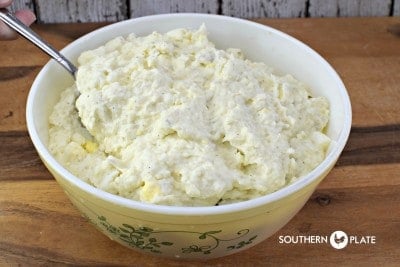 Once eggs are stirred in, cover and refrigerate several hours or until chilled.

Enjoy the best potato salad I have ever put in my mouth! 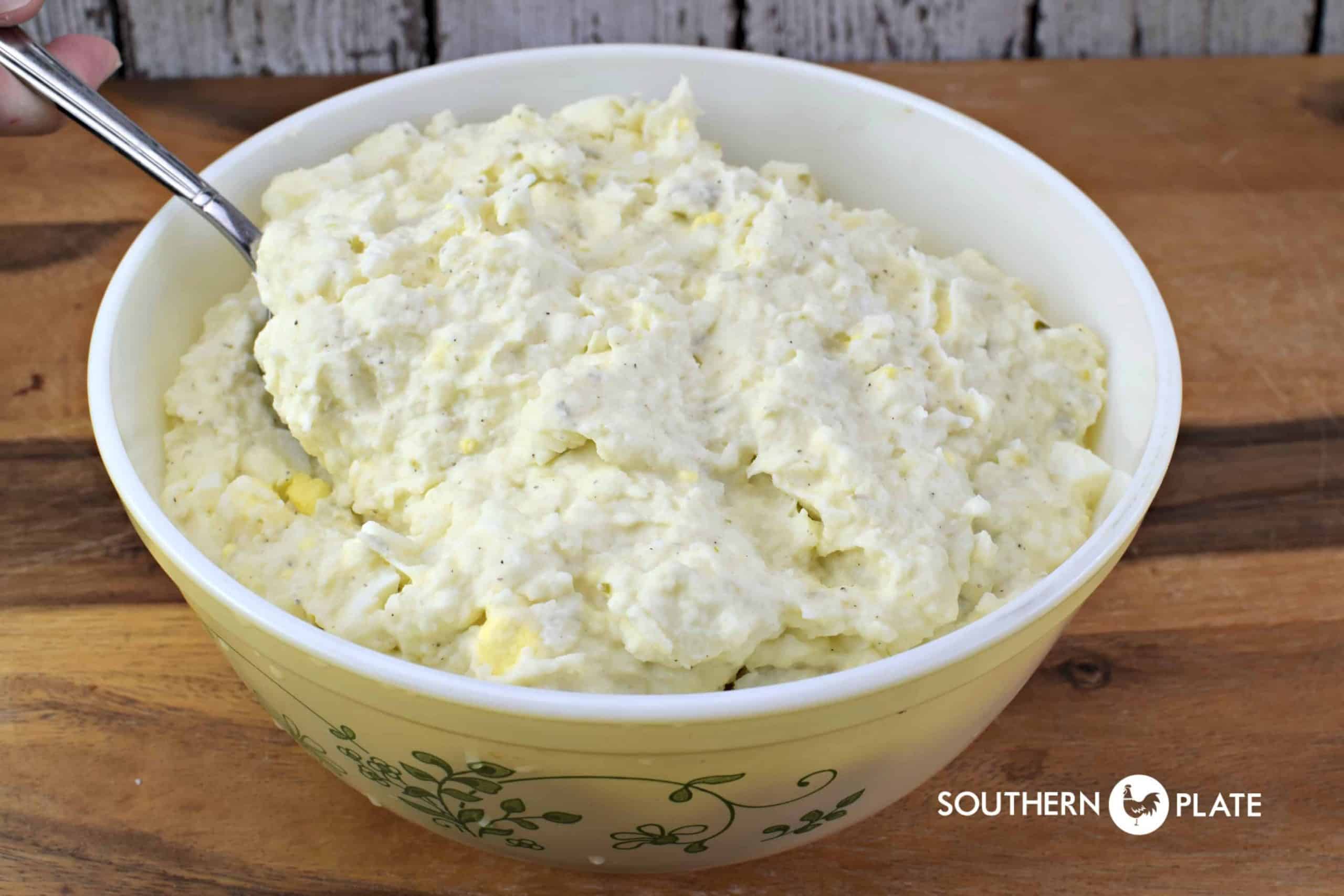 A unique potato salad made famous by a local icon. This is surprisingly easy to make but unlike any other. If you want to wow the crowd, make this one!
Print Recipe Pin Recipe
Prep Time: 25 minutes
Cook Time: 20 minutes
2 hours
Total Time: 2 hours 45 minutes
Course: Salad
Cuisine: American
Keyword: barbecue, potatoes
Servings: 4
Calories: 398kcal

Hey Everyone! I’ve heard from a LOT of people (please emphasize “lot” as much as possible when you read this) that they:

A. Feel confident Thomas’s used dill instead of sweet pickle.

B. Can’t bear the thought of sweet pickle in a potato salad and prefer dill.

So I just wanted to pop in and reiterate that this is my version of the recipe and as a person who really, really loves sweet pickles, that is what I naturally used. You, of course, are welcome to substitute dill if that is what you prefer. There is a good chance that is what Thomas’s used since they served dill pickle spears with some of their entrees. Just go with whatever cranks yer tractor.

Thank you to everyone who let me know this. You’ve kept my inbox from being lonely, that’s for sure! 🙂

Does anyone have that amazing Thomas Pitt vinegar bbq sauce recipe?
terrellking39@gmail.com

And now that bbq chain that bought Thomas Pit BBQ out is closed down (2021). The food wasn’t good and they didn’t have the customers that Thomas’s had. They didn’t last long in a town that knew good bbq/food.

I would never thought of using hash browns in potato salad. I have made it with instant potatoes. Can’t wait to try this.