Home » This and That » Beverages » Slow-Cooker Caramel Apple Cider

This slow-cooker caramel apple cider recipe is so easy to make and slow-cooked to perfection with just the right hint of cozy spices. Add whipped cream and caramel drizzle for the ultimate family-friendly treat when the temperature drops. 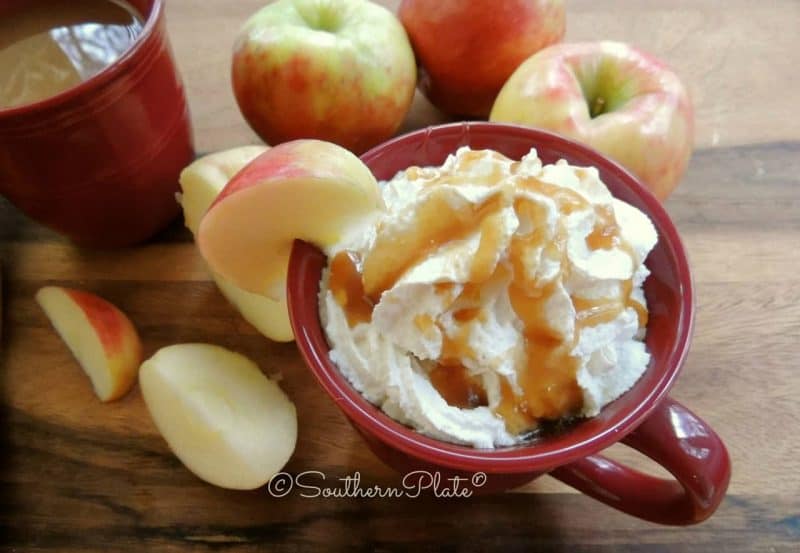 I love to see my kid’s faces light up when they come home to wonderful smells filling the house. And slow-cooked apple anything is sure to make your house smell as good as it gets this side of heaven. See also: crockpot apple butter, apple crisp in the slow cooker, and crockpot baked apples.

As my kids have gotten older they have come to love “custom” warm drinks, like the ones served in coffee houses and such. This slow-cooker caramel apple cider is the perfect treat at the end of a school day or on a lazy Saturday afternoon. During the colder months, I make a batch on the weekend and store whatever we don’t finish in the fridge to quickly heat up after school or for weeknight treats. Don’t let the simplicity fool ya, though. This caramel apple cider is definitely party-worthy as well.

So, what do you need to make my crockpot caramel apple cider recipe? Apple juice, a jar of caramel, ground cinnamon, cloves, and allspice. Oh yeah, this apple cider is delicious! The instructions are as easy as dumping everything in your crockpot, giving it a stir, and walking away. I cook it slow and on low for four hours and at the end, you have a sweet yet perfectly spiced caramel apple cider the whole family will enjoy.

I love to serve mine with whipped cream and more caramel drizzle because you can never have enough, right? Keep scrolling for stovetop directions as well if you don’t wanna wait. Either way, I hope you get to make it soon and enjoy some slow sippin’ time with your loved ones during these cold spells.

Place apple juice in a 5 or 6-quart slow cooker. Stir in spices and caramel and place heat on low.

After one hour, stir well again.

Serve in mugs topped with whipped cream and caramel drizzle, if desired.

When stored in an airtight container like a mason jar or bottle, your apple cider will last up to 1 week in the fridge. Reheat it on the stovetop until heated through.

How do you make caramel apple cider on the stovetop?

If you’re in a hurry and have time to stand over the stove, you can make this in a pot just by heating it over medium heat and stirring constantly. Once it comes to a boil, allow it to simmer for 30 minutes, stirring often.

Brandy, cognac, bourbon, whiskey, or rum (bonus points for spiced rum) all go well with apple cider. Spike it with a shot of one of these spirits before serving.

What are the best spices for spiced apple cider?

There are so many warm spices you can use in this caramel apple cider recipe. I’d recommend sticking to 1 tablespoon of ground cinnamon as the base (or 2 cinnamon sticks) and then adding a cumulative teaspoon or two of any of the below:

For that traditional mulled apple cider feel, use whole spices (like whole cloves, whole allspice berries, and even fresh ginger). You can just pop them in the slow cooker as is or tie them up in cheesecloth and submerge that in the cider.

How do you make cranberry apple cider?

Substitute the caramel for 4 cups of sweetened cranberry juice and proceed as instructed. 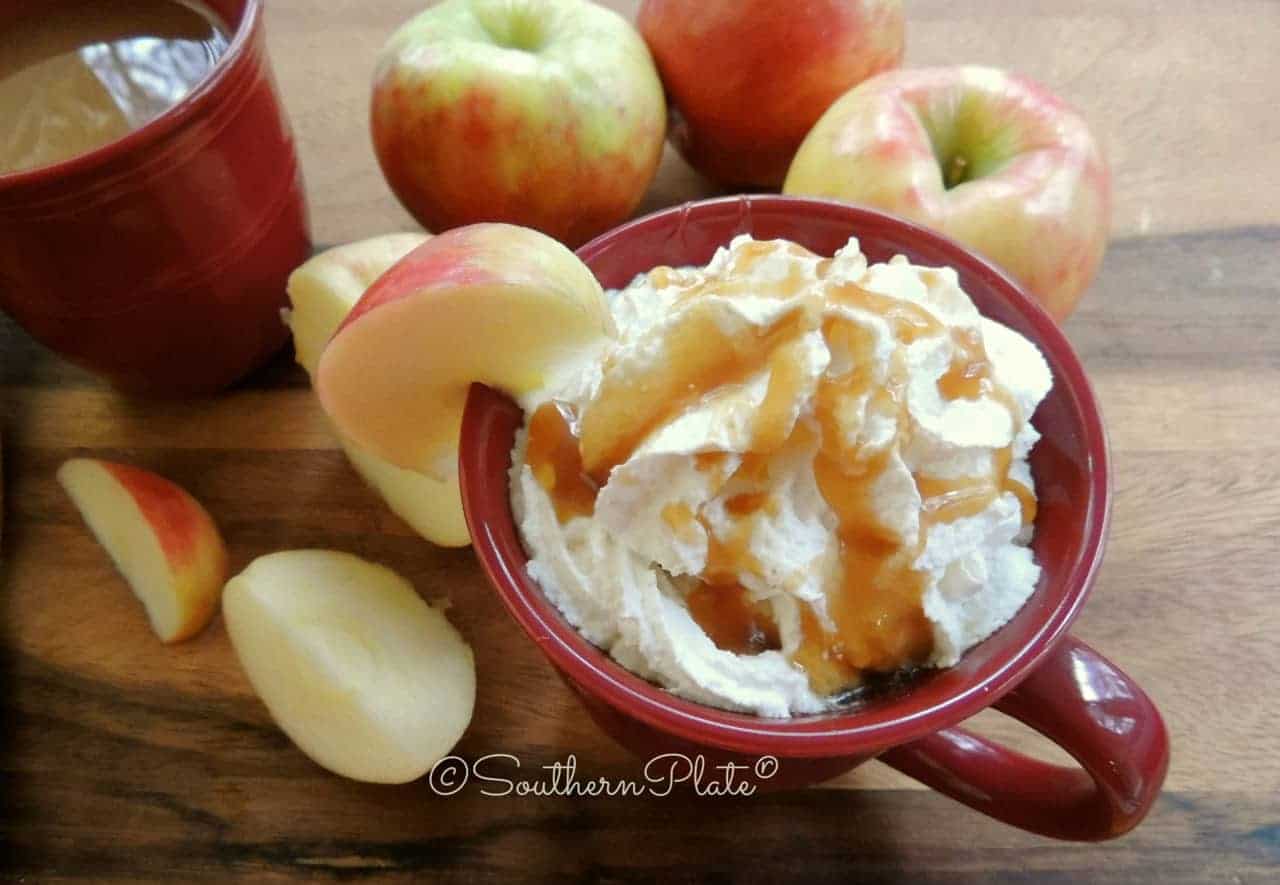 This recipe featured in Whatcha Crockin’

“A coincidence is a small miracle in which God chooses to remain anonymous.”

Submitted by Joanne White. Click here to submit your own or read more!

YUM!!!! I can’t wait to make this and take out a mug for my daughter and I then send the rest to school with her for the teachers. It is cold in Texas today and even colder tomorrow so this came at a perfect time. Keep the YUMMINESS coming Christy!!!!

Did you get snow Marsha? I saw on the news where many cities in Texas had snow!

We live in central Texas near Waco so we only saw mostly sleet and and a few sprinkles. That’s enough for me though as I was born and raised in West Virginia and have had enough snow to last me a lifetime. I moved to Texas in 1983. Beautiful memories of the snow though. My favorite being my mom going out on the porch while “us kids” would be at school and make herself a big bucket of snowballs then when we would come home from school she would pelt us as we walked up the hill to the house. Boy could that little 4 foot 10 inch momma pack a snowball hard and had a deadly aim. Boy those were the days!!!

This sounds fabulous! Gotta try it this weekend.

I hope you enjoy it Deanna!!

Sounds and looks amazing!!! I can remember that during the winter months when we would get of the school bus – we could walk into the ;house and there was this wonderful gingerbread smell throughout the house.
The memory at times is strong that I can literally smell the gingerbread!
My mom, Gladys, was one in a million! The most outstanding person then and now. She has been gone for 10 years but she is still missed and thought of often.
Thank you Christy for writing this article – it was what was needed today.

Oh my goodness, I can smell it right along with you Jan!!

Sounds like the perfect thing for the kids this snowy and cold afternoon in Ohio. This little treat will make getting homework and music practice done more enjoyable for kids and mom. Thanks for sharing!

I like your thinking Mary Lynn! I can just see you all gathered around the table warm mugs in hand! Have a blessed day and y’all stay warm!

Just made this, thank you for sharing

I hope you enjoy it Carol!!

Two of Corbett’s things: apple juice and caramel. I know we’ll all enjoy it, but it will be a special taste of love for him. Thank you so much for sharing the recipe, Christy! It’s cold in Orlando today. (Well, cold by Orlando standards.) This will warm everyone’s tummy and heart this evening! Blessings!

Blessings to you Maralee, I hope Corbett enjoys!!

I can just imagine the wonderful smell! Hope your day is going great!

I hope your day is great as well Mary!!