Home » Side Dishes » Tomatoes and Okra Recipe with Bacon

This four-ingredient tomatoes and okra recipe with crispy bacon and tender onion will knock your socks off.  I mean you did see bacon in the title, right?! 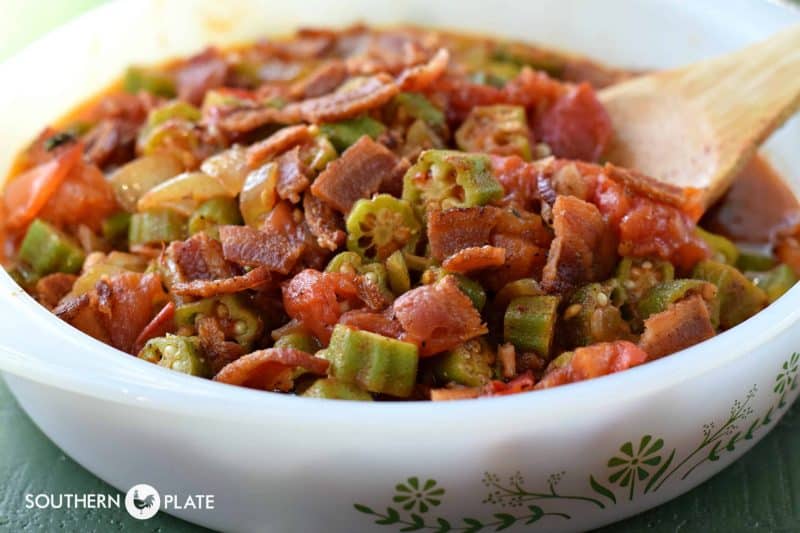 Some of my favorite recipes begin with “first you fry up some bacon…” and that immediately tells you a lot about this dish. Garden fresh spoils of spring and summer blend together perfectly to create a flavor that’ll make your tongue slap your mouth. I’ve made countless variations of this okra recipe throughout the years but this one tends to be my favorite these days — mostly because, well, bacon. I mean, seriously. Bacon.

Take a moment to just stare in appreciation at how beautiful this tomatoes and okra recipe looks all mixed up together in my vintage dish? ~sigh~ Makes my heart happy and my stomach growl. I don’t reckon you could ask for much more than that.

Now, I know there are some okra haters out there. A lot of people avoid okra because they feel it is slimy. However, cooking it how we do in this recipe is going to really help that because we are actually sautéing the okra at very high heat, in bacon grease no less, and this significantly reduces that one characteristic that seems to stand out to some folks. Me? I could eat okra all day long anyway you cook it. But like I said, this dish is a dear favorite and has won over many an okra naysayer.

There’s just something about the juicy tomatoes paired with crunchy okra, crispy bacon, and tender onion that makes this one of my favorite Southern side dishes. Are you ready to give it a go?

How to Make My Tomatoes and Okra Recipe with Bacon 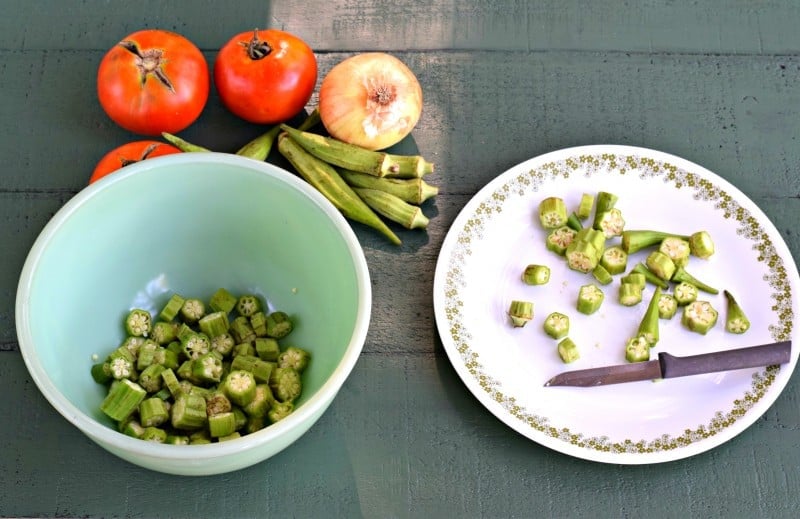 Chop up your onion and dice your okra and tomatoes.

Then, fry your bacon in a large skillet and set it aside on a paper towel-lined plate once it is nice and crispy. 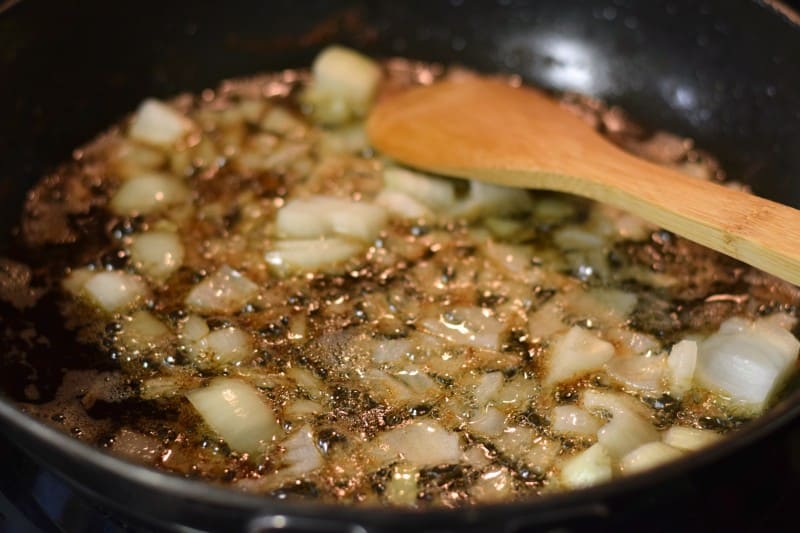 In the bacon grease that is now in the skillet, place your onions and cook over medium-high heat until they are translucent.

If using turkey bacon, as I do now, add a tablespoon of olive oil to the skillet. 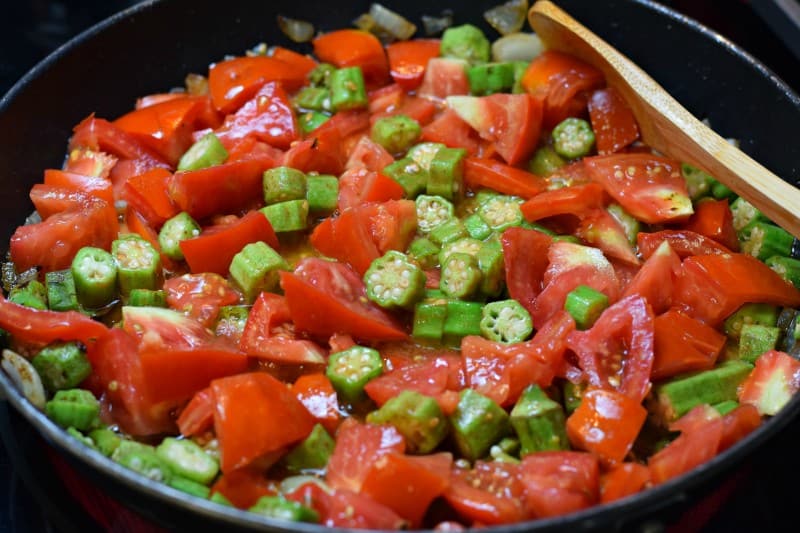 Add okra and tomatoes and cook, stirring often, until okra is tender. Sprinkle liberally with salt and pepper (according to your taste).

Serve immediately because, well at this point I’m usually eating it right out of the skillet anyway.

So if y’all want some of it you better step up pretty fast!

This tastes amazing served alongside any Southern meal.

What do you serve with tomatoes and okra?

Can I make this into a main meal?

To make tomatoes and okra into a main dish, add some extra protein, like cooked sausage, shredded chicken, or cooked shrimp. Secondly, serve it over mashed potatoes, rice, or grits for a hearty and filling supper. 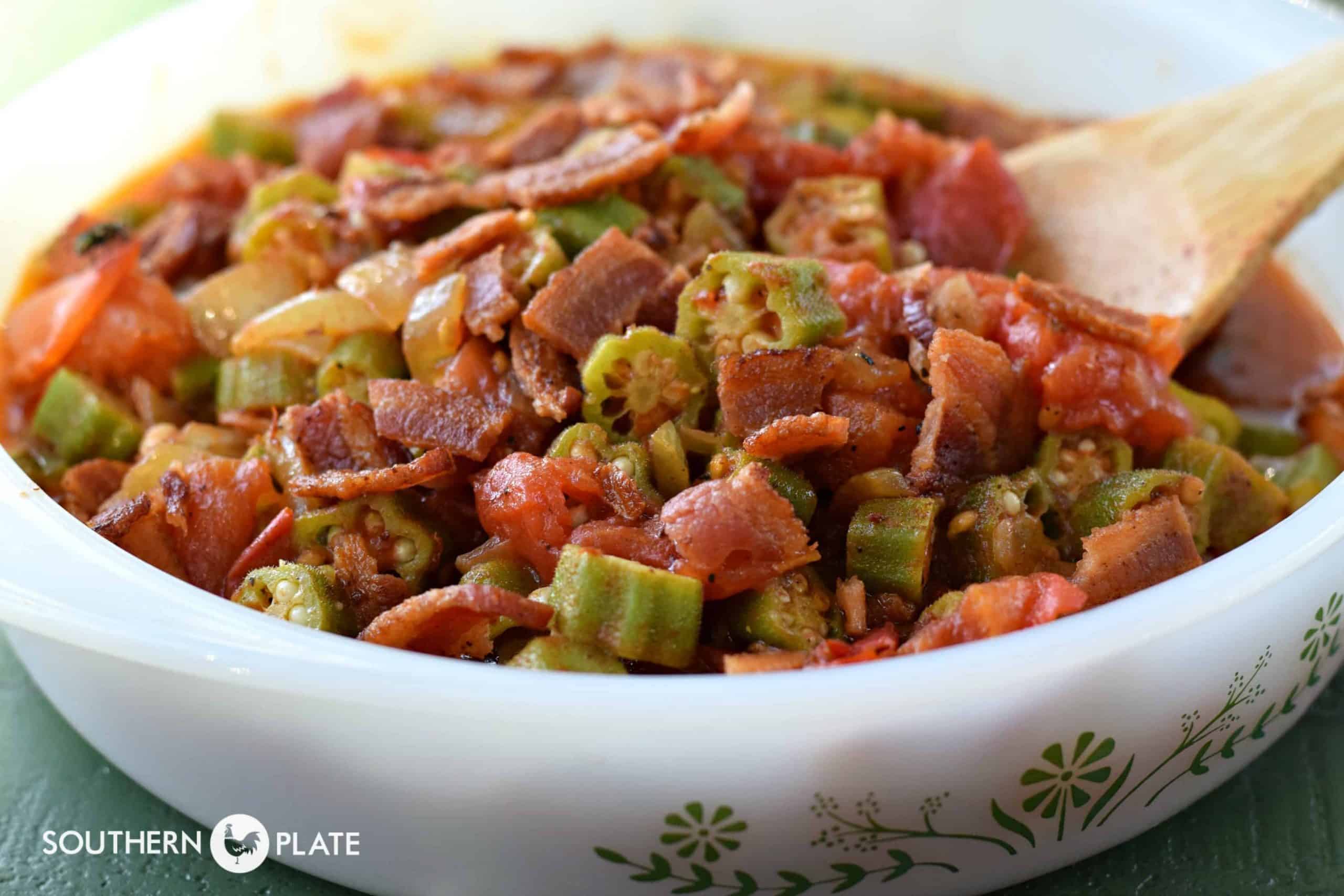 *I'm not really suggesting that you make this dish with 50 pieces of bacon. However, I would not object to you doing so, provided you invited me to supper. As far as the ingredients in this, you can use more or less of any one item based on what you have on hand.
**We use turkey bacon and add 1 tablespoon of olive oil to the skillet when frying the onions.

“A strong woman looks a challenge dead in the eye and gives it a wink.”

I use all the ingredients you have posted, but I add garlic, chili powder and sometimes the Rotel with habanero peppers. I love this stuff and make it in bigger batches than y’all do.

Instead of fresh tomatoes, I use a can of Rotel. It gives it a little heat and lots of flavor!!!! If you want even more heat, sprinkle Tony’s instead of salt and pepper.

This sounds like a great Low Carb side dish? What do you think?

Somehow I missed this when you first posted it. Made it tonight, pretty much doubled the recipe, used the whole package of bacon and also sliced a link of jalapeno summer sausage into it for an electric skillet low carb meal. Two thumbs up from my husband who could not imagine okra without the corn meal. I also left a few okra pods whole and cooked them in with the bacon as I imagined they would take longer to cook – perfection. Served with more uncooked onions and tomatoes. Heaven on a plate!

I am so glad you liked it Melissa!!! Love the idea of cooking a few pods of okra with the bacon!!

I love okra anyway you fix. Especially boiled and pickled. My Granny used to add a Tablespoon of lemon juice when she boiled it water and it does cut down on the slime

This recipe rocks…one of my girlfriends suggested cutting the corn of a couple of cobs…that is good as well if you want a little variation. Thanks so much for sharing this recipe. It is just wonderful.

I am so glad you liked it Vicki!! Love the corn suggestion, I will have to give it a try!